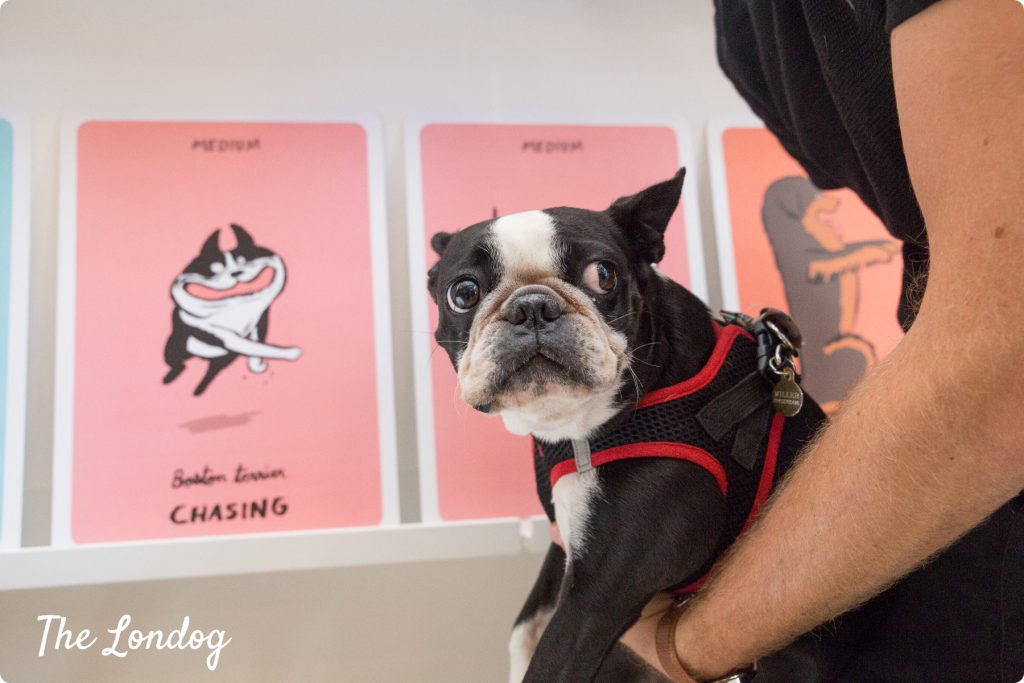 There is a new card game combining awesome graphics and dogs in town and you will want to get your paws on it! With a great timing for Summer holidays, Yolky Games and renowned French graphic artist Jean Jullien have launched their Kickstarter campaign to fund the production of “Dodgy Dogs“, a fun card game all about dogs causing mischief. I was lucky to attend and curate the photography at Dodgy Dogs’ Kickstarter launch event downstairs at Mother London, this week, and today I tell you all about this wonderful project. 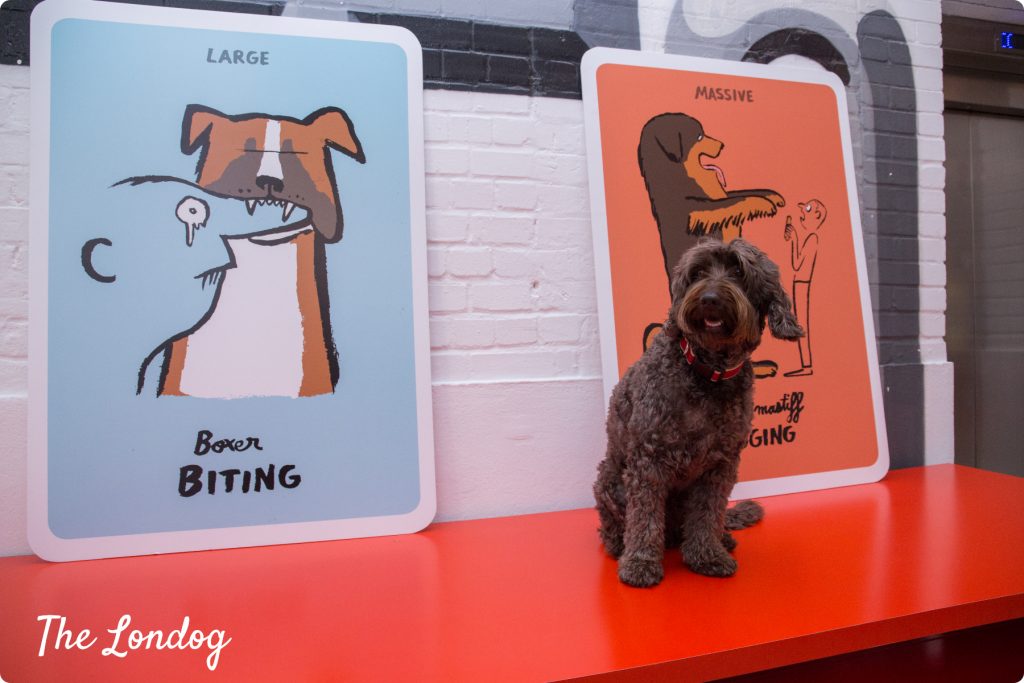 Dodgy Dogs is more than card game. As Margaux-Alix Gardet, from in-house incubator Broody at Mother London – that has been assisting Yolky Games in developing the project – says, “The design is charmingly witty and playful and is intended not only to be a great fun game to play but also beautiful design object.”

She explained that Yolky Games worked with a very talented creative team from Mother London (one of whom is a card shark and the other an illustration expert) and Jean Jullien to create Dodgy Dogs. When she mentioned the project, a few months ago, I was very much looking forward to seeing the prototype, but today I can say that deck is even more stunning than expected and I love all the thought they have put into it.

“Yolky Games is a small London-based creative company staffed by card enthusiasts, who like Jean, are also massive dog-lovers. Jean has used dogs at the centre of his work many times in the past, and even launched his book ‘Under-Dogs’ in the Biscuit Building, where Yolky Games is based. From a creative perspective, it’s match made in heaven”, commented Margaux.

What Dodgy Dogs’ game is all about: the rules 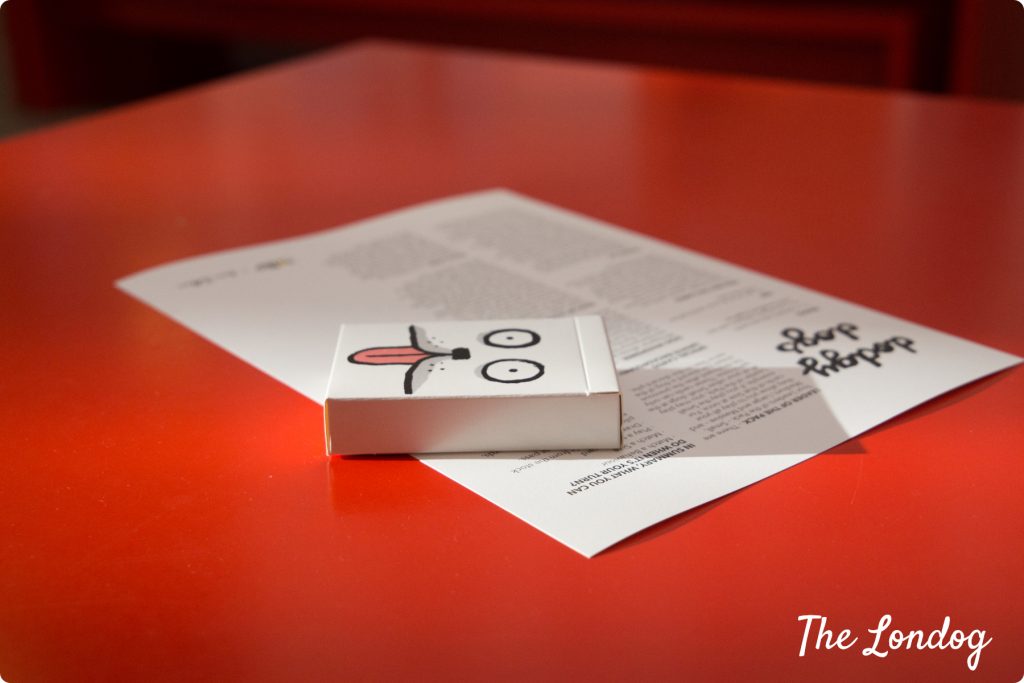 “The entire concept of this project plays around the idea of simplicity, so the rules follow that thread”, explained Margaux. “At the start of the game, you are dealt a hand of Dodgy Dogs. They’ll be one of four different sizes [small, medium, large and massive dog], and they’ll all be performing one of twelve different bad behaviours. Your aim is to get rid of them all. Because who wants a hand full of Dodgy Dogs, right? The first player places one of their dogs down on the table. The player to their left must then match either the size, or the behaviour of that dog, and place theirs on top. If they can’t, they have to pick up cards from the stockpile until they can place one down. And so it goes.”

The cards feature dogs chewing, digging, biting, peeing, stealing, escaping, humping, and many more. Drawn by Jean Jullien, they are one more beautiful than the other! 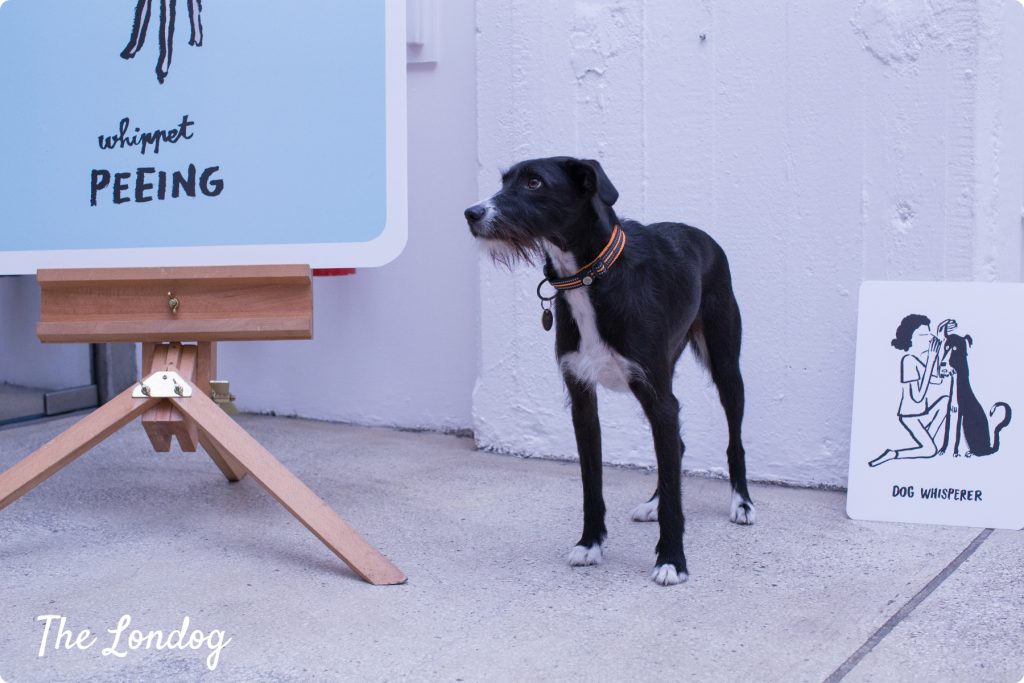 Swiper next to “his” Dog Whisperer card

Margaux continued, “Of course, there are some special cards too! They make the game really exciting. There’s the Dog Whisperer. He allows you to play any Dodgy Dog you like (as long as you whisper). The Wild Card makes the dogs go… well, wild. That means everybody has to swap their cards with the player next to them. There’s pick-up cards. And all sorts of others too.”

Awesomely, there is a huge breed diversity in the game and there are some mutts featured too! If you have been following Yolky Games x Jean Jullien from the start, you will have noticed that they even asked the public what breeds people would like to see included. In the deck, you can find common breeds (like Golden Retriever, Pomeranian, etc.) and rare ones like for instance Irish Wolfhound, Puli, Komondor and even Tibetan Mastiff. 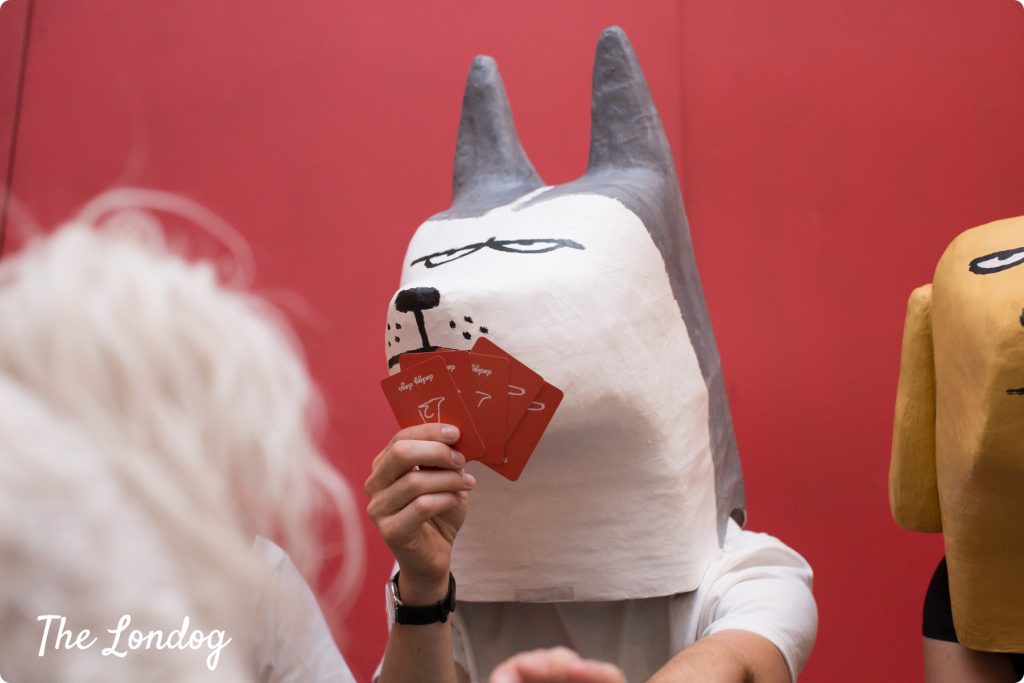 “We’ve been working on this concept since September 2017. We’ve done extensive research on various dog breeds and decided which ones will go in the game. There are over 50 different breeds included in the game – everything from Chihuahua to Great Danes. We have also left space for people to have their own dog featured in the game!”, added Margaux. 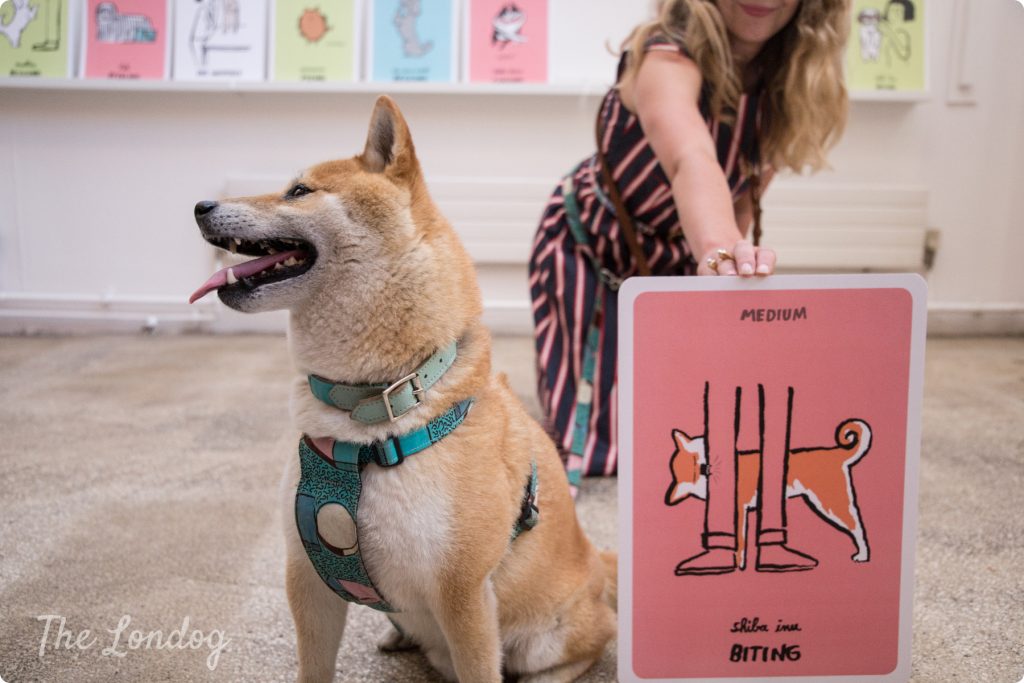 On 27 June, Yolky Games and Jean Jullien hosted their Dodgy Dogs launch party downstairs at Mother London (the renown advertisement agency which has an awesome agency dog pack). The setting was amazing: the cards were displayed in A3 format on a wall, while some bigger ones were placed on easels and tables too. These became the perfect building material for an improvided card castle before the end of the party!

For their campaign, Yolky Games and Jean Jullien had Studio Pinata creating some large dog heads that were worn to shoot their Kickstarter film. At the launch party, guests had a great fun trying them on and pretending to play cards at the green table. And dogs joined in too! 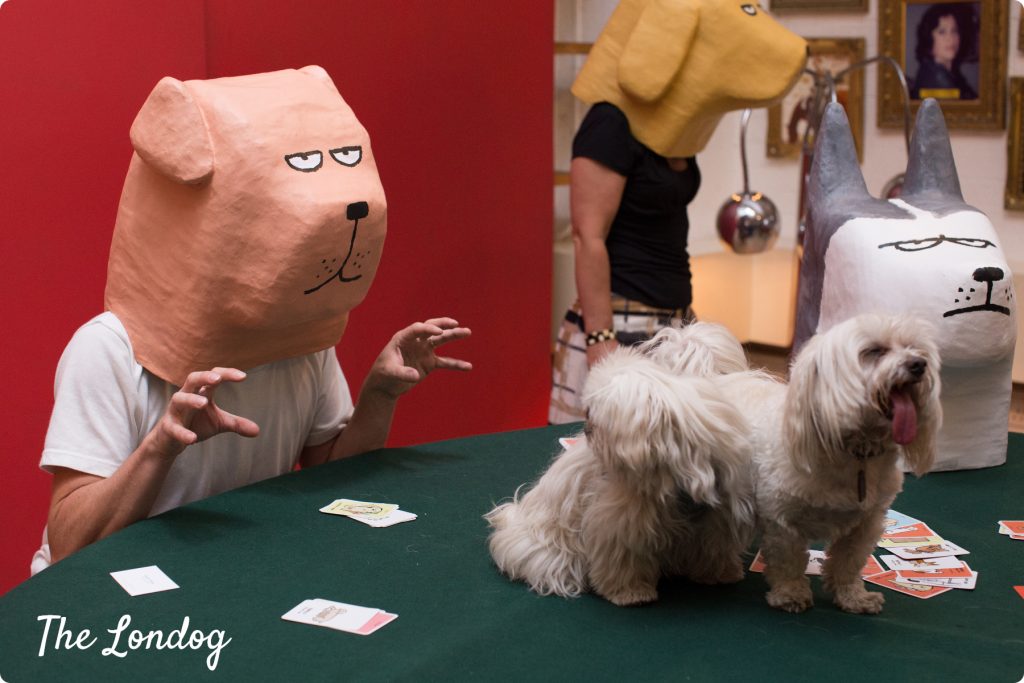 The guest list included a number of dog influencers. There were Marcel Le Corgi, Bun the Sausage, Sydney the Pug, Lilliput the Little London Maltese, and others, as well as the dogs from dog brand Hiro+Wolf, and some of the agency hounds of Mother, including Bear and Poppy, and we finally also got to meet Swiper!

The launch also turned into a game night, as card decks and instructions were provided on the tables. Guests could try and play the game and the luckiest had a game with Jean Jullien himself! 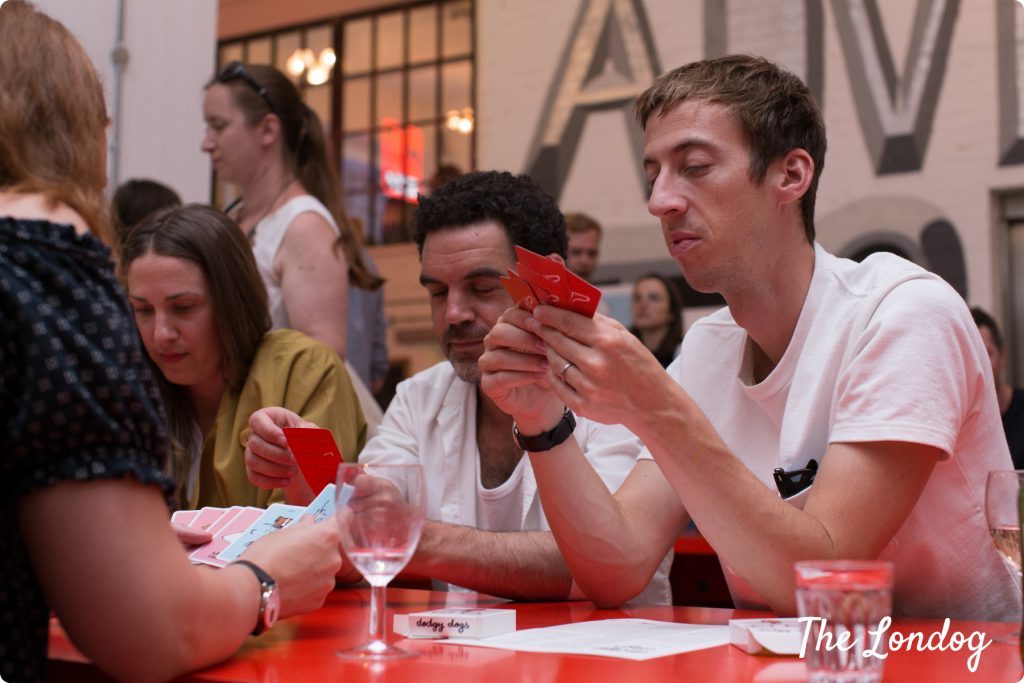 In just a few days from the launch of its Kickstarter campaign  (on 26 June 2018), Dodgy Dogs has more than tripled its initial goal and is heading for a stretch goal of £50,000.

Backers can choose among a number of wonderful rewards, from a single pack of cards (£15 or more pledge), to a twin pack (£25 or more), plus a limited edition tote bag (£32 or more), a limited edition A3 print of their choice autographed by Jean Jullien (£150 or more) and, those looking for dog fame and something to treasure forever, can even pledge to get their dog drawn by Jean and included in the actual game (£1,000 or more)! And there are only 2 chances left to get your dog included. 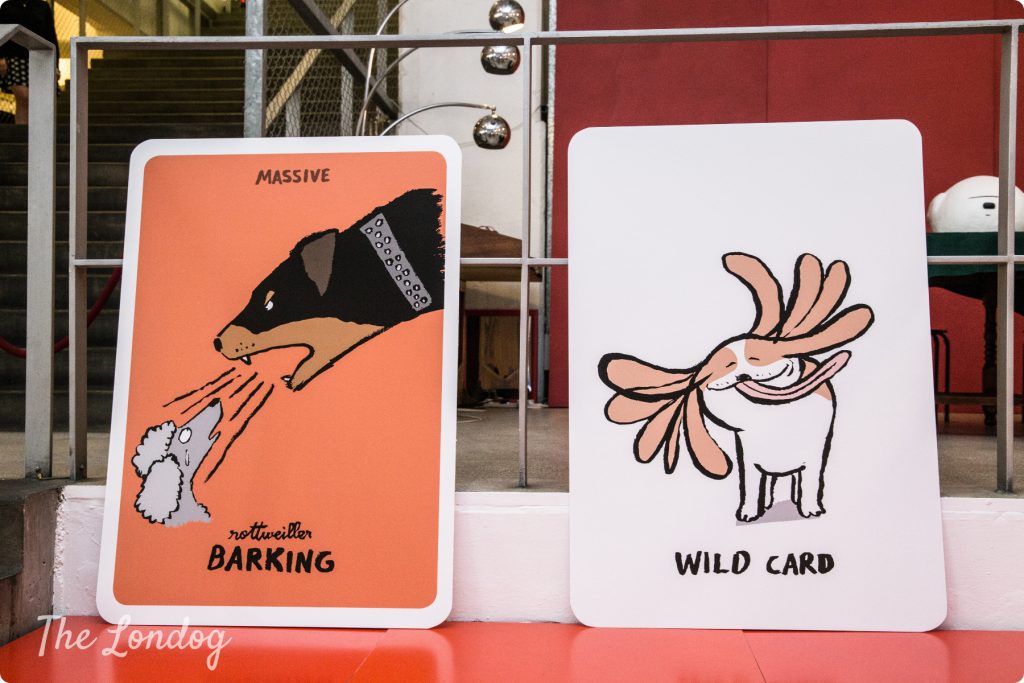 The founders have put their own pups in the game, and at the launch party there were some of them, like Swiper, who inspired the Dog Whisperer card.

Get your cards deck 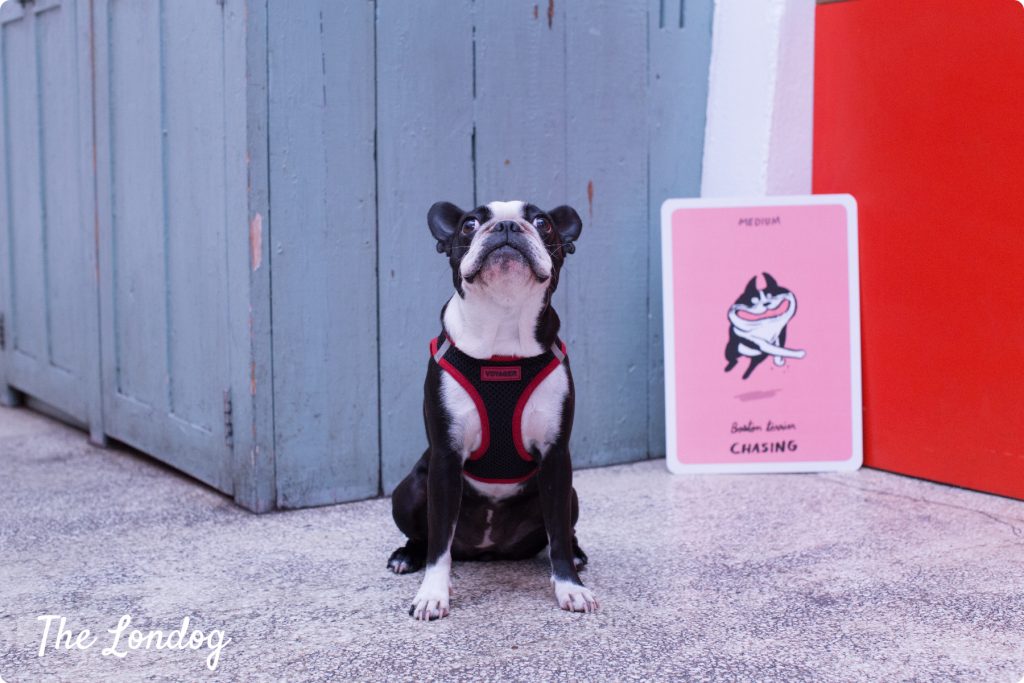 Dodgy Dogs’ Kickstarter campaign is closing in 24 days (on 26th July 2018 at 12pm) and some of the rewards are limited, so be quick to make your pledge if interested. The delivery of the cards is scheduled for this October. This means that although it won’t make it for your beach time this Summer, it will get you the perfect evening game for the Autumn. And, if you really didn’t fancy card games, the deck is so lovely that the cards could do nicely framed on a wall.

“Every single backer supporting our campaign makes a huge difference, no matter the amount. All you have to do is create an account, if you don’t already have one, and purchase the reward of your choice!”, concludes Margaux. 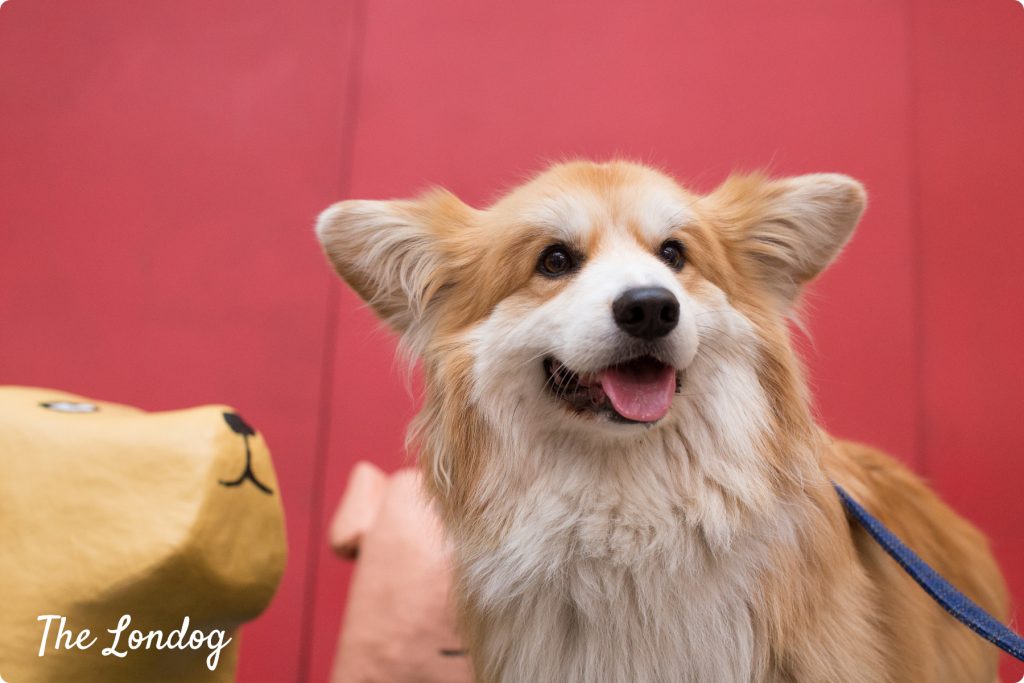 
STAY IN THE LOOP with THE LONDOG