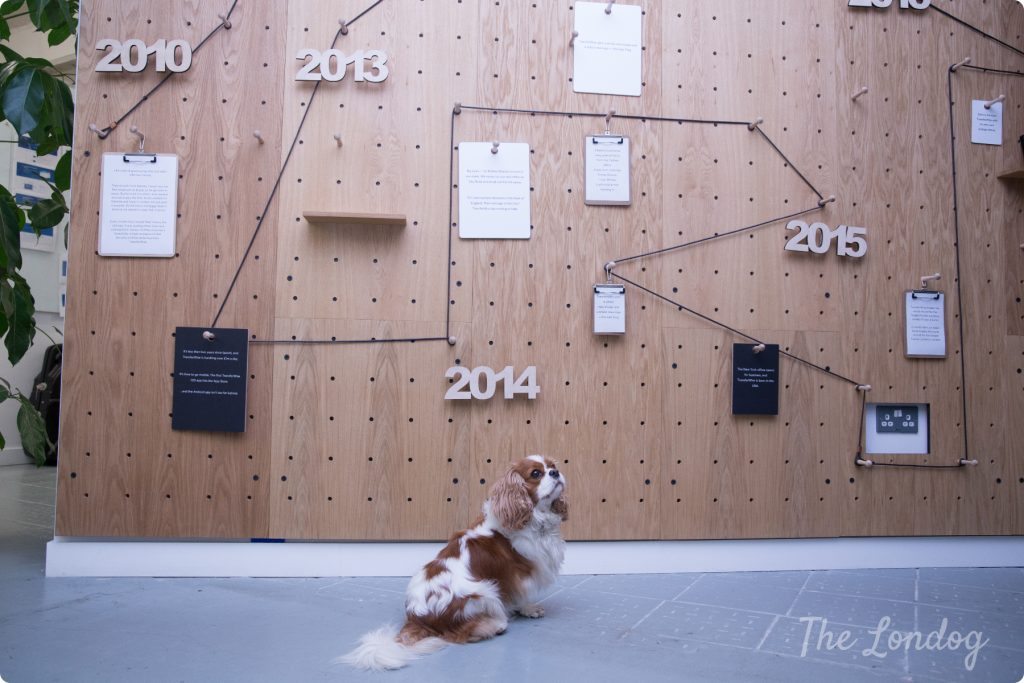 If patience had a dog’s name, it would be Nora, just like the three year old Charles Cavalier Spaniel who acts as office dog at the HQ of TransferWise – the international money transfer company – in Shoreditch. 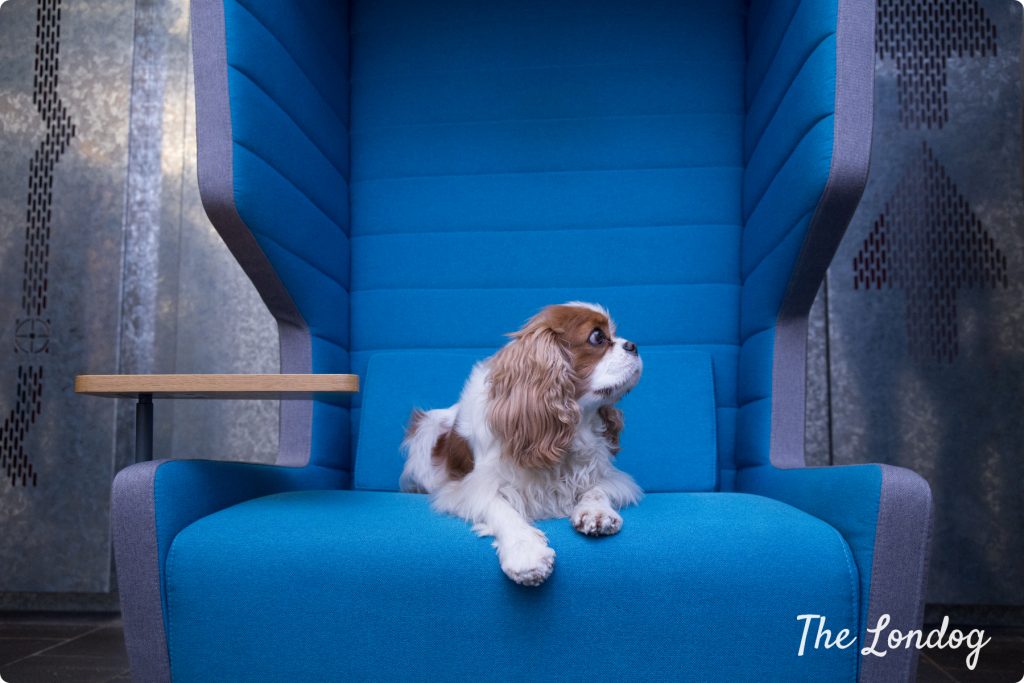 Nora moved to London with her owner Andra just about a year ago from Estonia. There she was already employed as an office dog at TransferWise’s offices in Tallinn, where she had a Pomeranian best friend called William. Her life has changed a lot since then, but what hasn’t is being a well-considered member of a very friendly work environment and team. Nora is so adorable and easy going that nobody ever seems to find anything annoying about her.

“Nora is a really chilled and relaxed dog”, says Andra. “She feels comfortable just about everywhere and with anybody. She can seem a bit shy when you first meet her and especially if a stranger stops to stroke her when we’re out walking. She might look away at first, but she’ll just wait politely until the humans are done petting her!”

Nora is also known for…

Loving:
“Sleeping on my lap.
Snow! Even when she was pregnant with 5 puppies she was doing backflips in the snow, despite the fact that her big belly almost touched the ground when she walked! She probably misses the snow quite a bit since we moved from Estonia to London. She was literally ecstatic when she saw snow again in London last month!”

Hating:
“Cats, squirrels and foxes! When she sees them or even smells she’ll turn in to a little furry barking monster!”

Funniest habit:
“When she goes to sleep she usually makes her own bed! She tries to make the blanket into the shape of a proper nest. Sometimes she’ll try to make her nest on our bed, wherever she likes, but she’s completely oblivious to anyone else, meaning that sometimes we’ll get an accidental paw in the face!
Snoring in the office when she’s getting some beauty sleep sitting under my desk. I quite often get my colleagues in the office turning around because they think that it’s me who has fallen asleep at my desk!”

An office dog day at TransferWise

They have modern furniture and interior design solutions, areas with different themes, and there is even a relaxing corner with a hammock hanging from the ceiling. And, of course, there are the dogs; not just Nora, but also a few others…

“Nora is a big part of our London office and her passpawt photo takes pride of place alongside our other employees on the wall”, says Andra. “Her job title is ‘Head of Barking’ and it’s ironic, because she’s probably barked only once since being in the office! But I think what is really meant with her job title is that she is the one who has to make sure there is no barking in the office. Ruby, another of our younger office dogs, sometimes needs a reminder from Nora!” 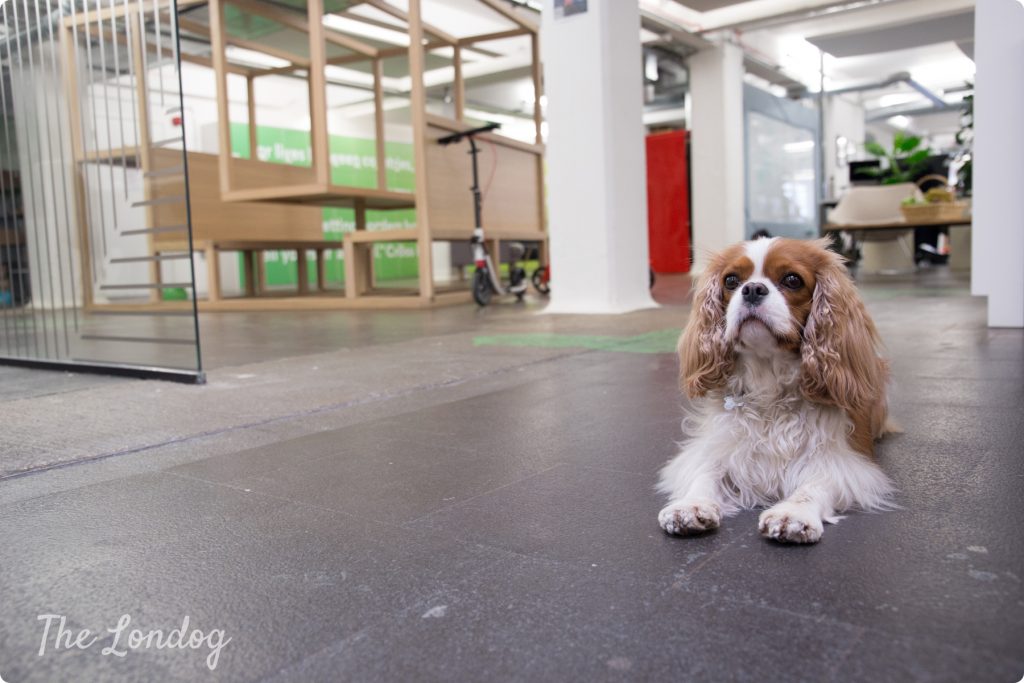 Andra giggles while telling me that Nora is more famous and well known in the office than she is. “She gets greeted all the time by name. I guess her rise to fame started when she featured in a video about our office. While we were shooting everybody saw Nora as a true movie star!” explains Andra.

This is not surprising, considering how effortlessly and confidently Nora poses in front of the camera and the sense of tranquillity she infuses. No wonder Andra’s colleagues are so fond of her.

“Everybody loves the fact that Nora is so comfortable being in the office; she feels like part of the furniture”, notes Andra. “She boosts office morale, helps people feel less stressed and generally brightens up their day. There are so many people in the office who simply light up when they see Nora. In fact, I overheard another team who were contemplating moving to desks that are closer to Nora because of the benefits of being around her! She also really helps social cohesion as people might bond by chatting whilst stopping to pet her or taking her for a walk together.”

During her days at the office, Nora always looks forward to particular moments. “She really likes it when we all come together for a team lunch in the big kitchen on a Friday. Then she hunts for all the fallen pieces of food on the floor! If I leave my desk to go to the kitchen or to a meeting, Nora likes to come along to check out what’s going on and get some strokes or maybe even some treats from my colleagues!”, recounts Andra.

TransferWise’s offices are on the 6th floor of Tea Building. Andra and Nora often walk to the floor instead of waiting for the lift. “When we come back from lunch or a walk and we take the stairs, Nora will stop at each floor. My colleagues find it really funny as we have to convince her on every floor that there are still some to go! It must be tough climbing all those stairs for a small dog!”, says Andra. 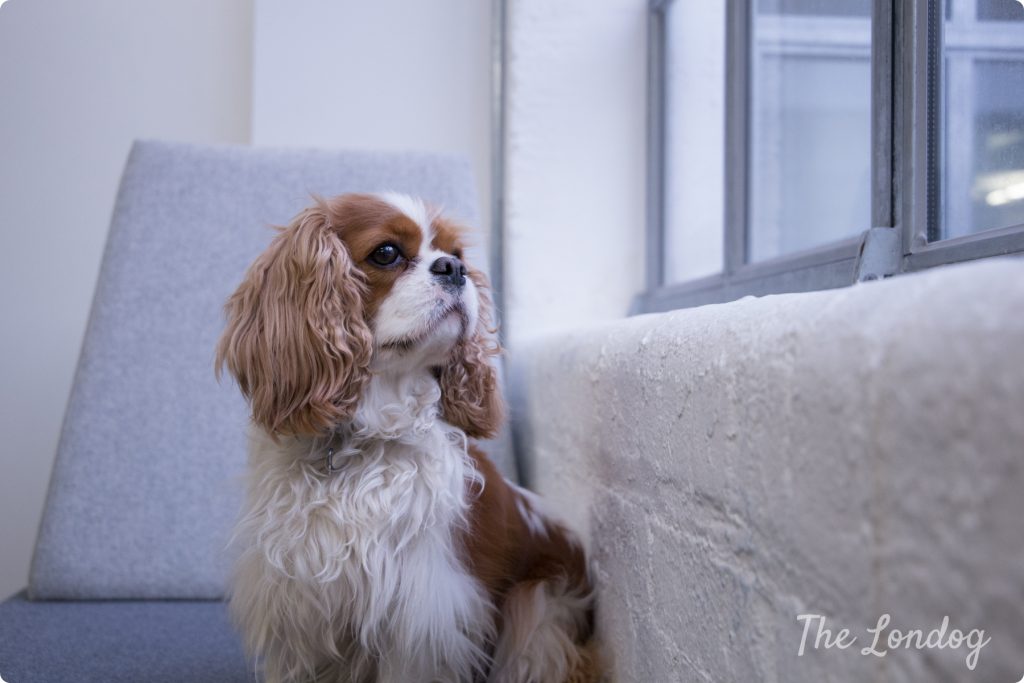 Aside from Nora, there are three other office dogs regular at TransferWise’s London offices: Ruby, Tiernan and India. “Tiernan and Ruby are younger puppies who want to play more and have a lot of energy, whereas Nora is quite happy to sit by the desks or in our office chillout area”, explains Andra. From time to time the pack is joined by a couple of other furry friends who come in to join the fun.

Rachel LLoyd, People and Environment Manager at TransferWise, explains why they started allowing team members to bring their dogs to work, “The TransferWise office dog-friendly culture started because we noticed that more and more people who worked here had dogs at home and were either trying to juggle their days with commuting back to care for their dogs or, in the case of younger dogs, they felt they couldn’t leave them all day. We decided to implement a dog-friendly office culture to help our employees and make our offices a nicer environment to work in”.

Tomorrow we will introduce you to an office WOLFDOG… Stay tuned and find his story from 24.00 on the blog!