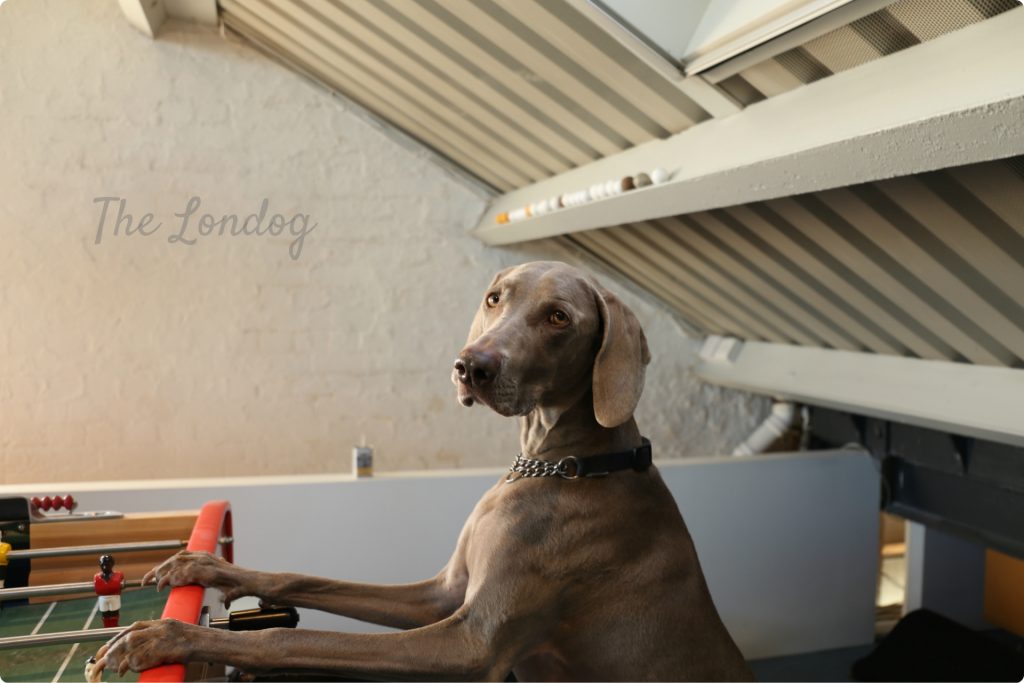 W hen I first met Tim – and his sweet doggie Bramble – and told him about my Office Dogs project, he said that I would love Made by Many‘s resident dog and offices. He shared the link to their ‘strategy dog’ videos and it was not long after that I popped by their place. I must say that reality exceeded my expectations and taking pictures of Tilly, the six-year-old resident Weimaraner, was such an easy and joyful experience!

Made by Many’s beautiful offices are located next Regent’s Canal, facing a quiet spot where the canal meets a dam and a weeping willow is reflected in the calm waters. As soon as you enter the first thing to greet you is a poster of Tilly, informing that she is very friendly, but that her bark can be a bit surprising, and so inviting you to knock loudly if you would like her to be tied up. 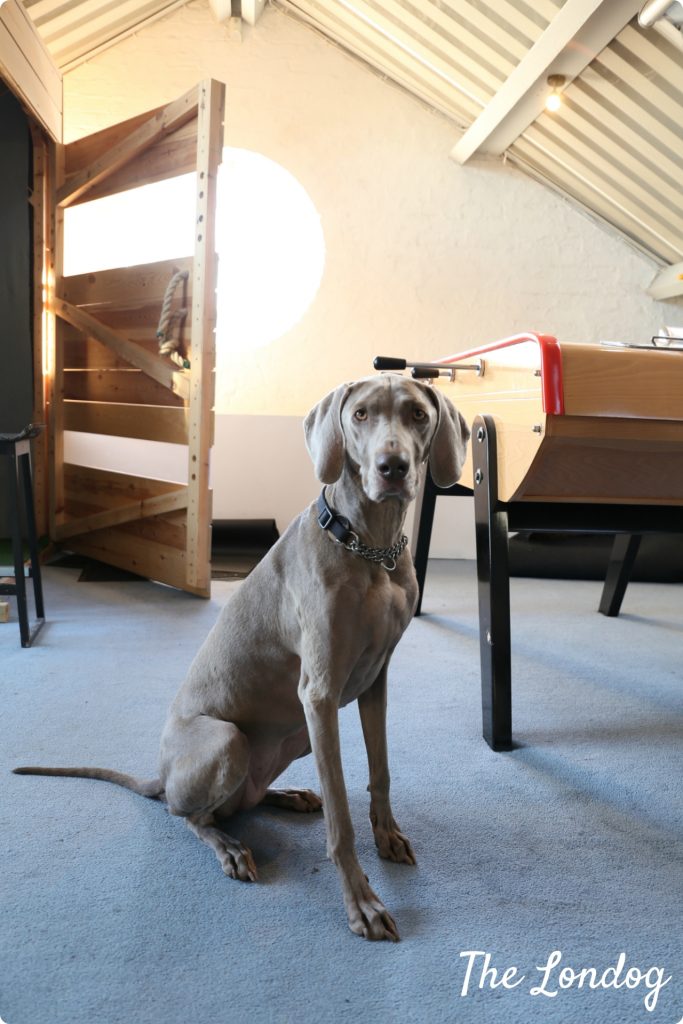 Isaac, Tilly’s owner, describes her as incredibly loyal and says that she “treats the office as her pack (therefore always alerting us to stranger danger, which is not always the best welcome to new clients!)”. Indeed, when I got to the office, I was treated with great suspicion and was grumbled at until Tilly was satisfied that I came in peace…and with treats!

“Supermodel looks, always hungry and will regularly leave her drool on the edges of desks, incredibly placid so easy to play with, always knows when it’s nearing home time and brings a ball to people in the office to play with,” added Isaac. “Invariably she picks up an injury every 6 months so has to wear a cone of shame, much to her humiliation.”

Tilly is a very alert dog, and Isaac explained how she loves looking down from their mezzanines so she can guard the entire office, as well patrolling for attention and food. “She follows me around a lot of the time, especially if I’m about to sit on a sofa so she can jump up too. She loves scratching herself on the back of our reception sofa (especially when she needs to pee, which she’ll then signal by loudly barking at the door),” noted Isaac. 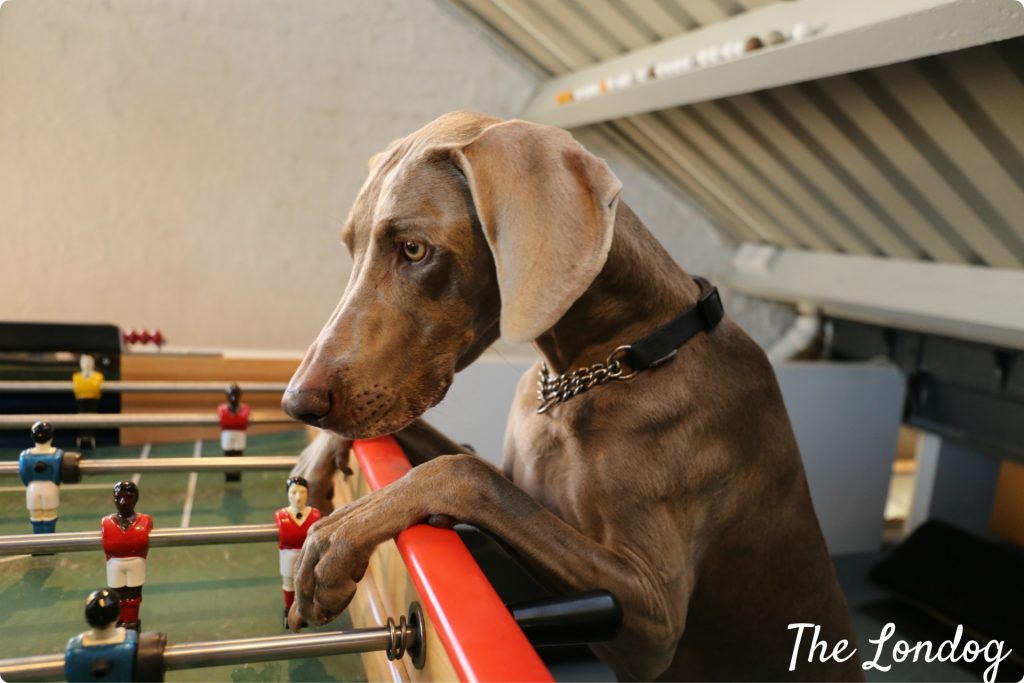 As a dog worth her salt, Tilly has a nickname, ‘strategy dog’, as well as a Vimeo profile, featuring videos of her time as a puppy. Isaac described how “Tilly had a bit of internet following (amongst other design agencies) for a while. Her nickname is strategy dog – not because she helps with strategy – but because when she was a puppy she was infamous for leaving little nuggets of ‘strategy’ around the office…”

Made by Many’s blog also published a brilliant post, a few years ago, about what takes to be a ‘strategy dog’, which is absolutely hilarious! 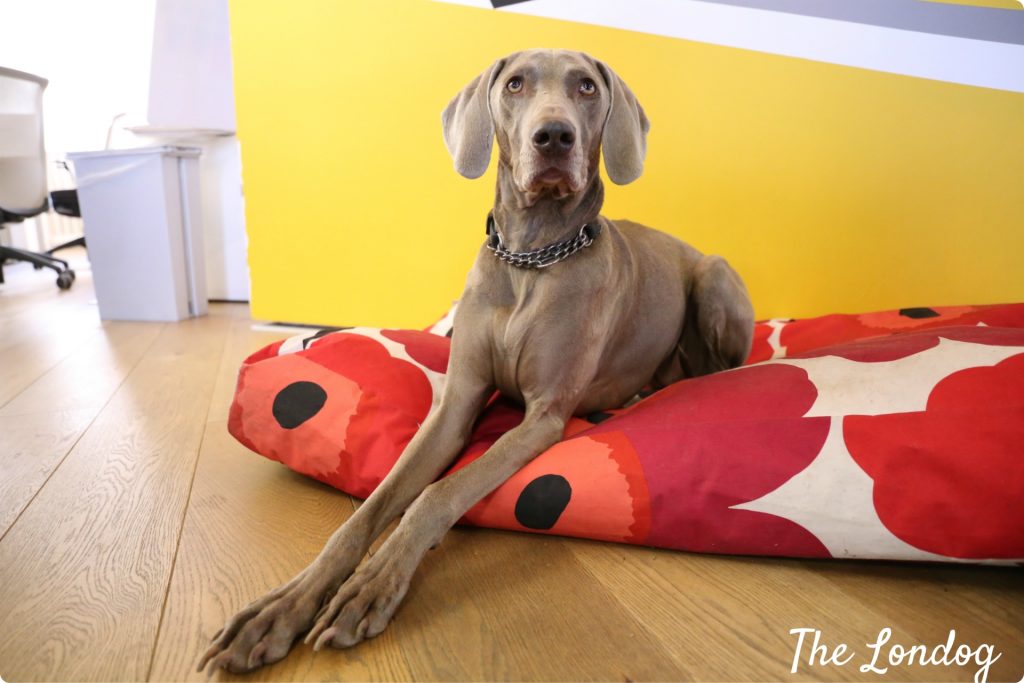 The Top 3, according to Isaac, are:

I am always curious to learn how dog-friendly policies start and in Made by Many’s case, Tilly was the first dog to be allowed in the office. “The policy wasn’t intentional, however we moved to a building that was dog friendly by default – our landlord on the ground floor had a Great Dane. I saw this as permission to fulfil my dream of getting a dog (and not having to shut it at home all day)” explained Isaac.

He recalls, at the beginning there was not a unanimous agreement about having a dog wandering around the office. “One of the other founders (who ironically now has a dog) objected before I bought Tilly – he hated the idea of the sound of a dog’s claws walking on the office floor,” Isaac told me. “For a couple of weeks I thought I’d have to buy Tilly little socks to wear on her paws! Thankfully you can’t hear her walk!”

As the years have gone by, having four-legged friends around the workplace has become a natural thing. “The maximum number of dogs we’ve had in the office is 4 in one day, which was a bit mental to be honest. Too much noise and energy! Now there’s one main dog (Tilly) and occasional visits from the dogs owned by the other founders (though other employees are welcome [their in])” said Isaac.

One of the other dogs you can occasionally meet at Made by Many is Bramble. He is a very happy chap who loves taking part to meetings. Indeed, when I  visited the office, he twice trotted away, pushed the glass door and sneaked in the meeting room in the middle of a conference. 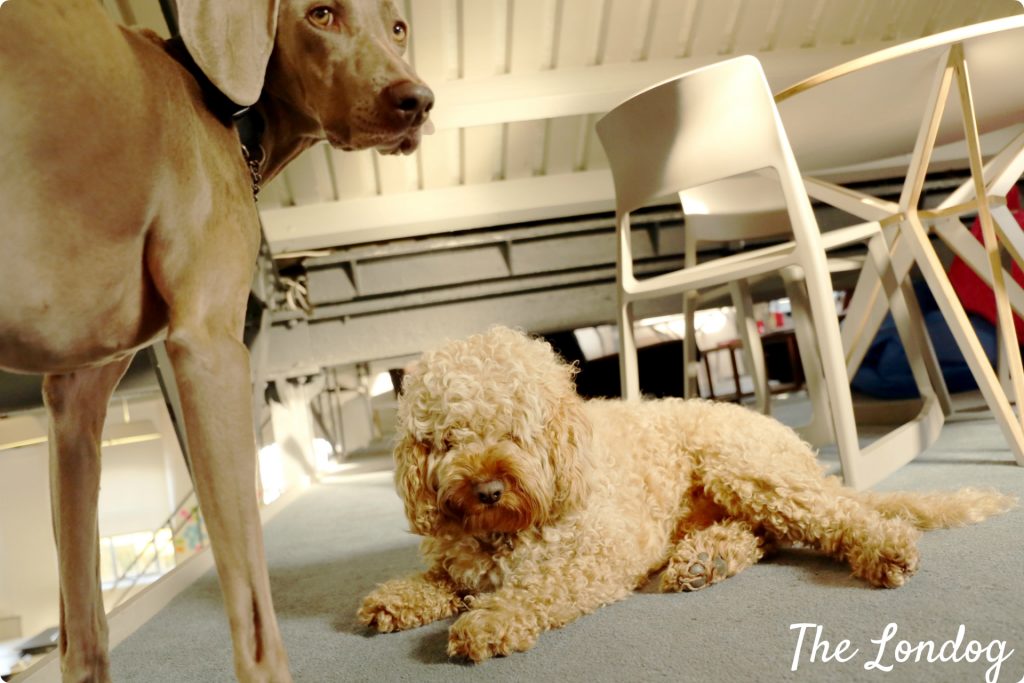 When I visited the office, Isaac was kind enough to print out some pictures of Tilly with a pack of other dogs, who go out with her dog walker. “It’s fun when the dog walker collects Tilly in the morning at 10am. In the summer when the balcony doors are open she can hear him when he’s downstairs and she goes mental. Often when the dog walker returns her he’ll let his other dogs in to the office for a bit – it’s not unknown for a pack of dogs to be running laps around the office at full pelt! He’s even been known to leave one of his own in the office for the day,” said Isaac.

Tilly is a hard worker and goes to the office even when Isaac is away. “If I’m away she stays with the dog walker, who still brings her to the office in the day time so her routine doesn’t change too much. If I’m away for a long time she gets very miserable and sits behind my empty chair”, he explained.

Tilly’s affection for Isaac is also nicely depicted by an incident which took place in her puppyhood “When Tilly was a young puppy and I left her in the office for the first time there was a panic when people thought she’d disappeared! Literally, she was nowhere to be seen and the entire staff did a police line across the office to find her. Eventually she was discovered sleeping in my gym bag – that’s true love!” 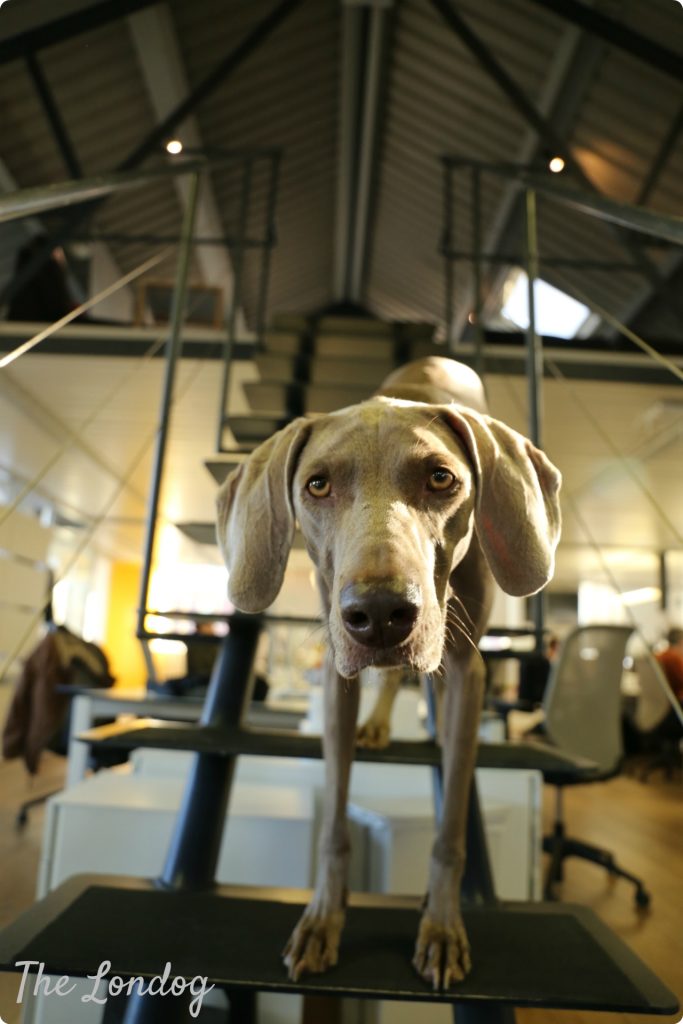 A wonderful addition to the work environment


I asked Isaac about the role Tilly plays in the work environment. “I think it makes a big difference. Whilst there are downsides, Tilly is a very loving and placid dog. I think stroking (or playing, or training) a dog is very therapeutic and calming,” noted Isaac. “It’s a great way of breaking up a task – a welcome distraction. Everyone in the office knows how to get her to do tricks (sit, stay, wait for food, spin, down, etc.) and several of them enjoy training her to do new things. There can also be something very comforting and wonderful about her joining you in a meeting or cuddling up to you on the sofa.”

Isaac concluded “Being able to bring a dog to the office means I can actually own a dog – I wouldn’t have her if I couldn’t. She helps keep me sane (and active, and happy, and relaxed)… though she can be a bit moody and ignore me if I’ve been away for a while!” 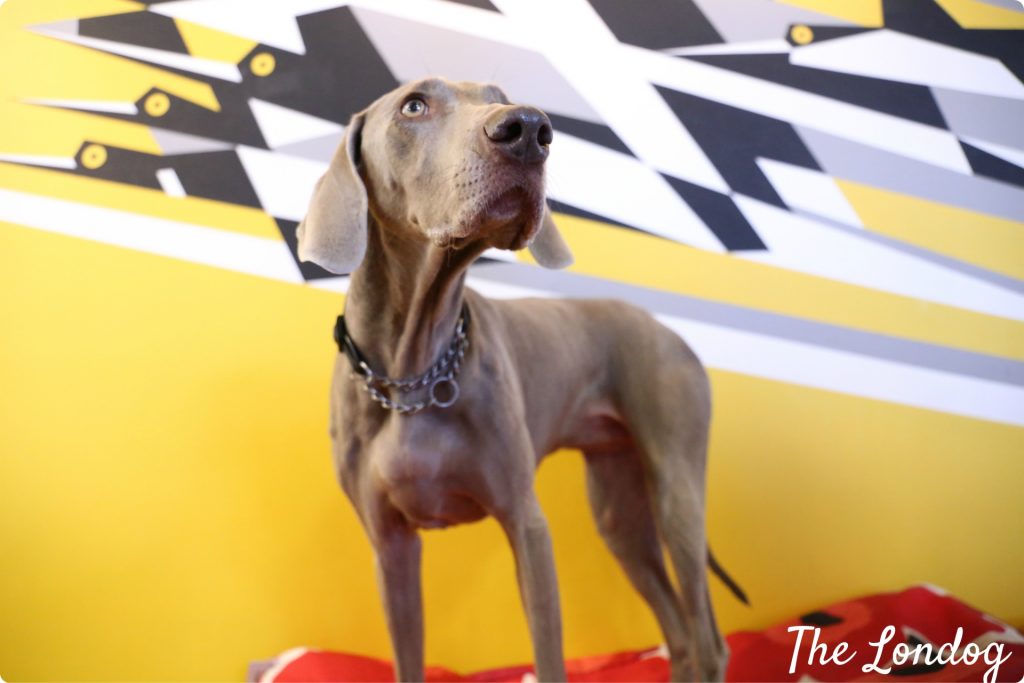 Did you enjoy the series? Don’t worry: it will be back in the New Year, with more stories of dogs at work!

Want to suggest an office dog you would like to see featured in the Office Dogs Series? Brilliant! Get in touch with The Londog, we can’t wait to hear from you!