Wooferendum March to Parliament: thousands of dogs to get ‘pawlitical’

Does your dog think Brexit is barking mad? If so, it might want to join the Wooferendum, a growing movement of canine campaigners on a mission is to send Brexit to the doghouse. On Sunday 7th October, thousands dogs are planning to march through central London to Parliament for the Wooferendum march.

On the dull horizon of Brexit uncertainty and confused talks, here appears a heartwarming and somehow reassuring fellowship, ready to start its march: the Wooferendum crew. We chat with Daniel Elkan, founder of the Wooferendum (who also kindly provided all the lovely photos featured in this blog post), about the initiative and what canines are looking to achieve for their humans.

“Dogs were never consulted about Brexit,” says organiser Daniel Elkan. “It’s only fair that they should be given a say – particularly when it seems that us humans are making a dogs dinner of the whole thing. The Wooferendum campaign is very much ‘By the dogs, for the people.’”

Daniel first started canvassing canine opinion a year back. “I woke up one Sunday morning and the word ‘Wooferendum’ had somehow formed overnight in my mind. So I made a sign from a piece of white cardboard and went to West Hampstead high street to see if local dogs I met would like to ‘bark out’ with the sign. I was amazed at the reaction. It seemed like dogs (and their owners) were really keen to express their views on something that is normally a very dry topic.” 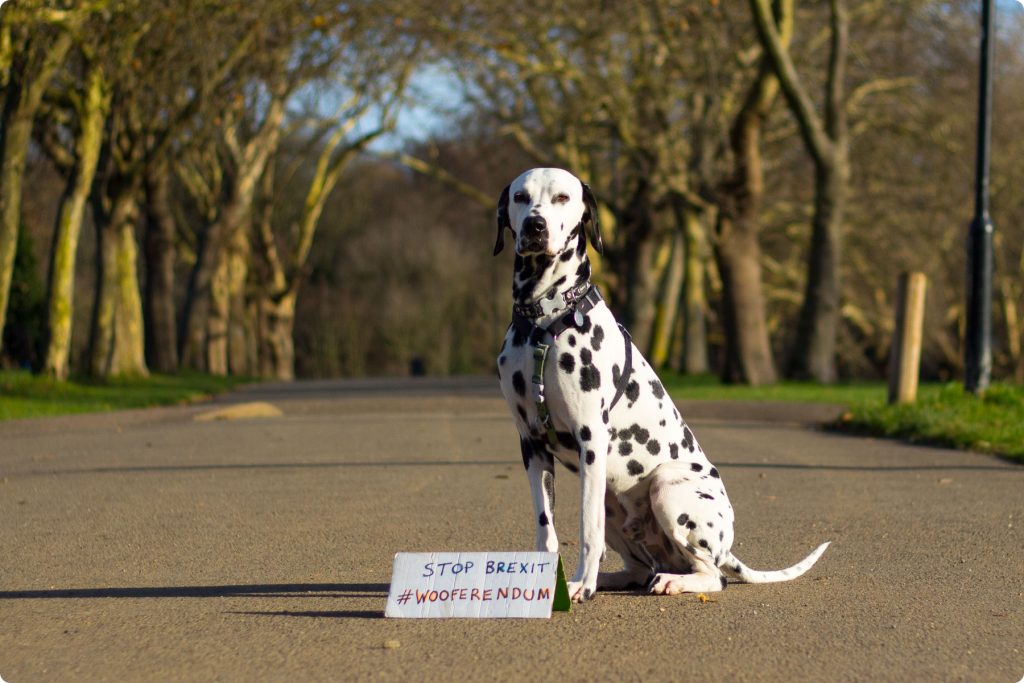 Rather than posting the pictures on social media himself, Daniel would print out the photos and put them on bus stops and lampposts, and give them to pubs and cafes to display.

“It was funny – I’d be sellotaping these photos of beautiful dogs with signs saying ‘Stop Brexit – #Wooferendum’ and people at the bus stop would start talking”, he recounts. “And even though the topic is political, because it’s all started with the dog, it’s always friendly. And then I’d look on Instagram a few days later and see that people had taken pics of the photos and posted them up there.”

A dog march to Parliament

When a friend suggested an actually dog march to Parliament, Daniel thought she was joking. “The idea of thousands of dogs marching through central London to Parliament seemed like a fantasy. But almost every dog owner that I mentioned this to was excited by the idea. So it just had to be done.”

To promote the campaign and spread the word about the march, Daniel and some cinematographer friends created a one-minute film, called The Wooferendum is Coming (watch the video below), which in just a few weeks has had over 140,000 views on Facebook. “There are no people in the film, only dogs barking out on their own volition, because they decide to take a stand.”

The film is certainly unique. “People ask me: ‘How did you get the dogs to do that?’ Most of the individual dogs in the film we met randomly. We’d just take our cameras to various areas of London and ask dog owners (and their owners) if they would like to be in a Wooferendum film. For the scenes with multiple dogs, a friend of Daniel’s recommended a dog-walking agency, Hairy Hounds of Hackney, who offered to help. They were amazing.”

“Watching Edita, founder of Hairy Hounds, get the dogs all into one place together, nice and calm, was like watching a cross between someone conducting an orchestra and someone spinning plates. But she managed to get the dogs calm and focussed. A couple of ‘the usual troublemakers’ had been taken to the side, out of view! The final shot with the dogs running, was actually an afterthought. We only had five minutes left to try it – and we got super lucky.” 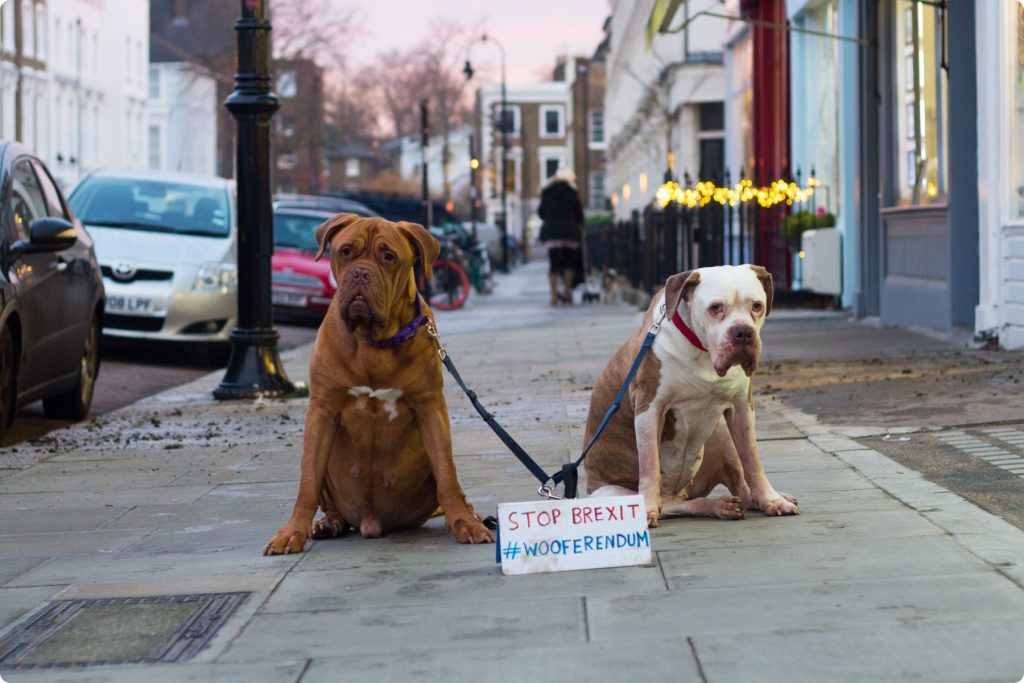 Although the campaign’s main message is that dogs are barking out to help their human friends, Brexit poses a significant threat to pet welfare, according to Dominic Dyer, a leading animal welfare campaigner and one of the co-organisers of the Wooferendum Dog March.

“Brexit could be disastrous for our pets,” Dyer says. “Some of the likely effects are a shortage of skilled vets and vet nurses and rising costs for animal health and pet food products. It could even spell the end of the EU pet passport scheme. If Brexit causes another recession on the scale of the financial crash of 2008, we can expect to see plunging living standards, forcing many people to give up their pets, leaving charities and shelters struggling to cope with the influx of animals in need of new homes.”

There may also be serious inconvenients for pets travelling across the border to the EU, in the event no deal is reached. In fact, as per the Government’s guidance released on 24 September, the UK would become a third country for the purposes of the EU Pet Travel Scheme, opening three potential scenarios.

In the best hypothesis, the UK could become a “listed country”, with minor changes to current policies; the second scenario would see some further (annoying) requirements introduced. In the worst of the three potential scenarios, burdensome requirements in terms of documents and health checks would be introduced, including a blood titre test for rabies antibodies. 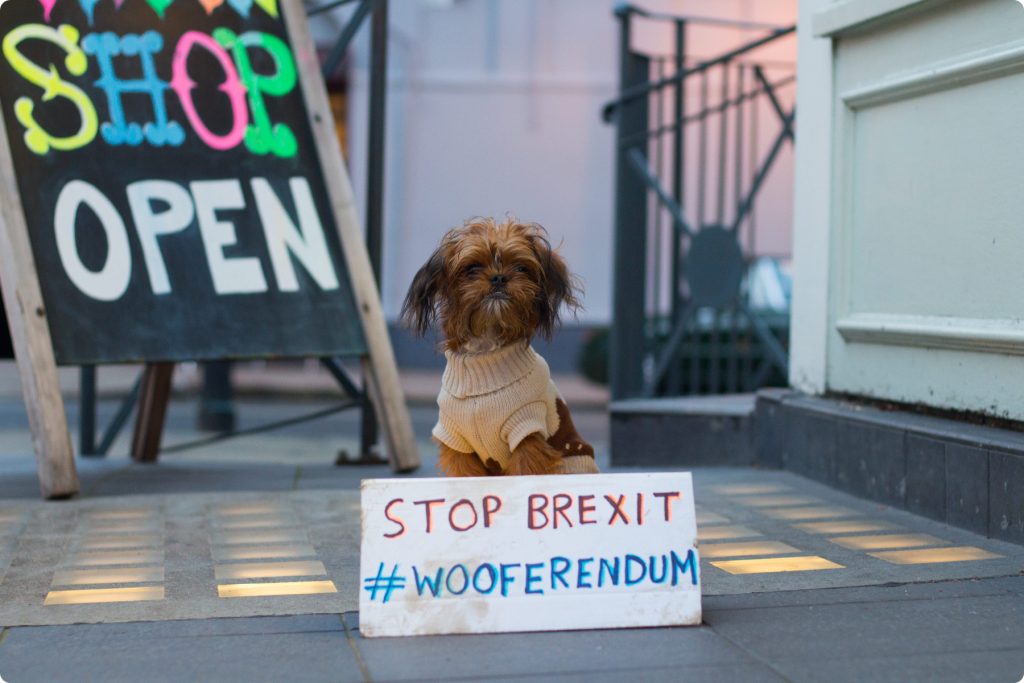 The route of the march, from Waterloo Place near Piccadilly Circus, via Trafalgar Square and down Whitehall into Parliament Square, is a 1.2km distance. The Metropolitan Police has agreed to close roads for the march. At Trafalgar square there will speakers and presentations. “We are inviting public figures and celebrity dog owners to speak, along with animal welfare campaigners and dog charities,” Daniel says.

Around 5,000 dogs and owners are expected to attend the Wooferendum march, and the response to the campaign has been heartwarming, according to Daniel. “We have printed little booklets – ‘wooflets’ – about the campaign, which we give to people with dogs that we meet in parks and at dog events, and people take more to hand on to other dog owners. It’s a lovely way of enabling people to spread the word and communicate the ethos of the campaign – person to person and paw to paw. Even cats are getting involved.’

The campaign has seen a flurry of activity on social media, with people posting in photos of their dogs with ‘#Wooferendum’ signs, in support. 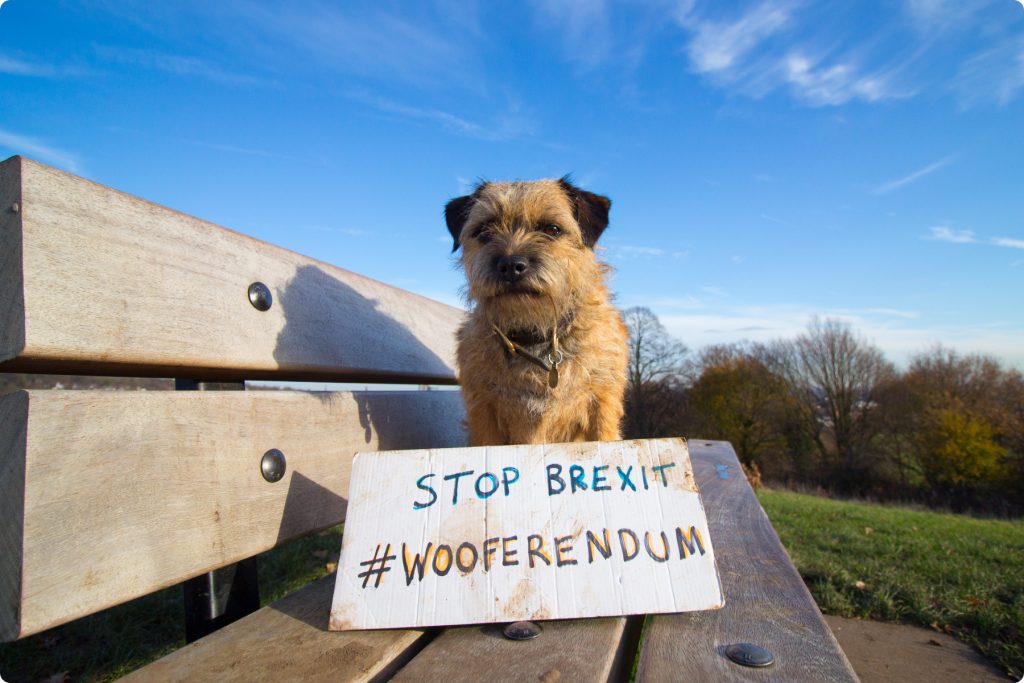 The march is looking like it is going to be quite a memorable experience. Apart from the spectacle of thousands of dogs marching through central London, Daniel and fellow organisers are planning best-dressed-dog competitions, best placards, dog-whispering on stage, and treats from dog companies. Humans can have their faces painted as dogs too – and friends without dogs can come and march behind the dogs in support.

To help pay for the costs of the march, the Wooferendum has created a crowdfunding page, featuring rewards donated by companies and dog services such as Ellery Bow, Pet Hates Toys, Posing Pooches, Hairy Hounds of Hackney and others.

“This is going to be unique, inspiring event – something to invite all your friends to – and it’s great how word of mouth is spreading,” Daniel says. “Dogs should be empowered to have their say – and on Sunday 7th October we are going to create the biggest bark in history.”

Will Larry the Chief Mouser to the Cabinet Office and Palmerston the Foreign Office Diplomog help support the cause?

How to participate to the Wooferendum March

The Wooferendum march gathers at on Sunday 7th October at 12pm at Waterloo Place, SW1Y 4BE. The route walks down Pall Mall, past Trafalgar Square, into Whitehall, past Downing Street and into Parliament Square, where a Wooferendum rally will be held.

You can find more information of their official website and on their Facebook event page. To support the cause on Crowdfunder visit this page. Don’t forget to check the ‘wooflet‘ too!

Credits: All photos in this post are courtesy of Daniel from Wooferendum. 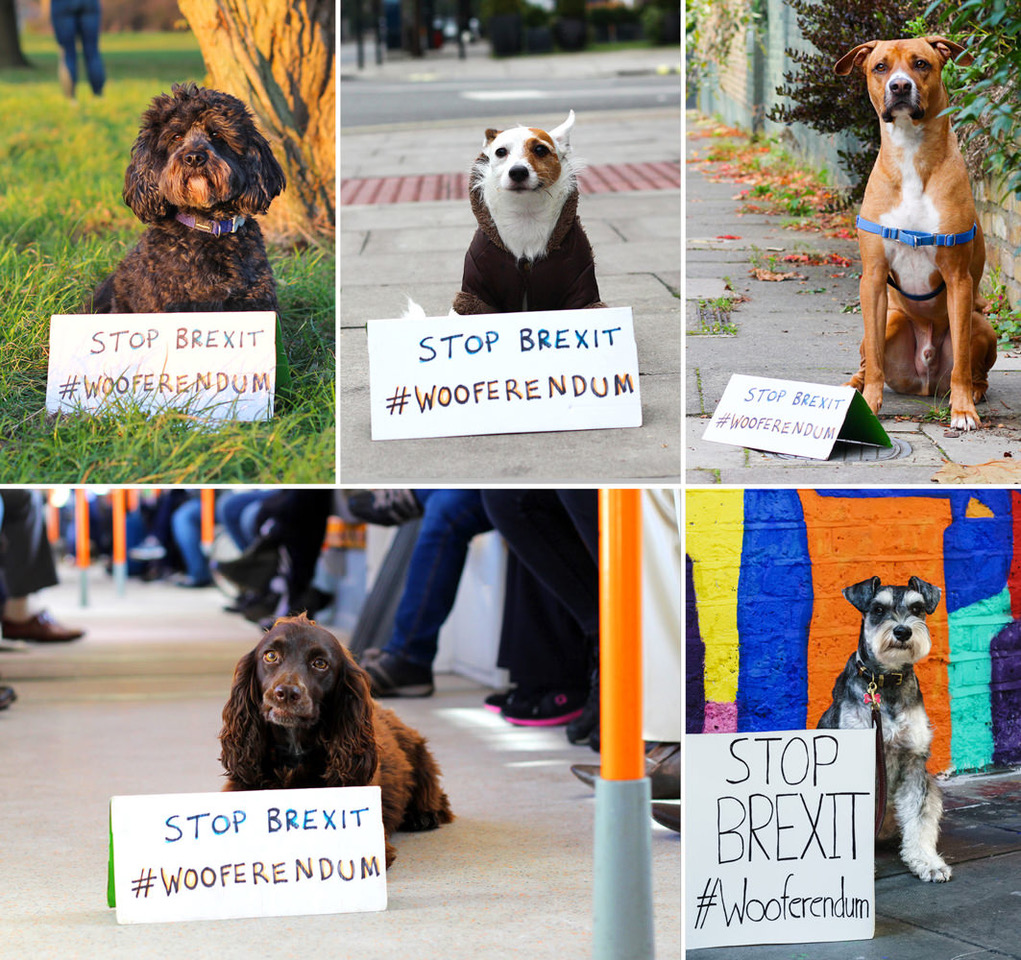 Read the blog post about highlights from the WOOFERENDUM MARCH.