SUP With Your Pup: Dog-friendly paddle boarding on the Thames 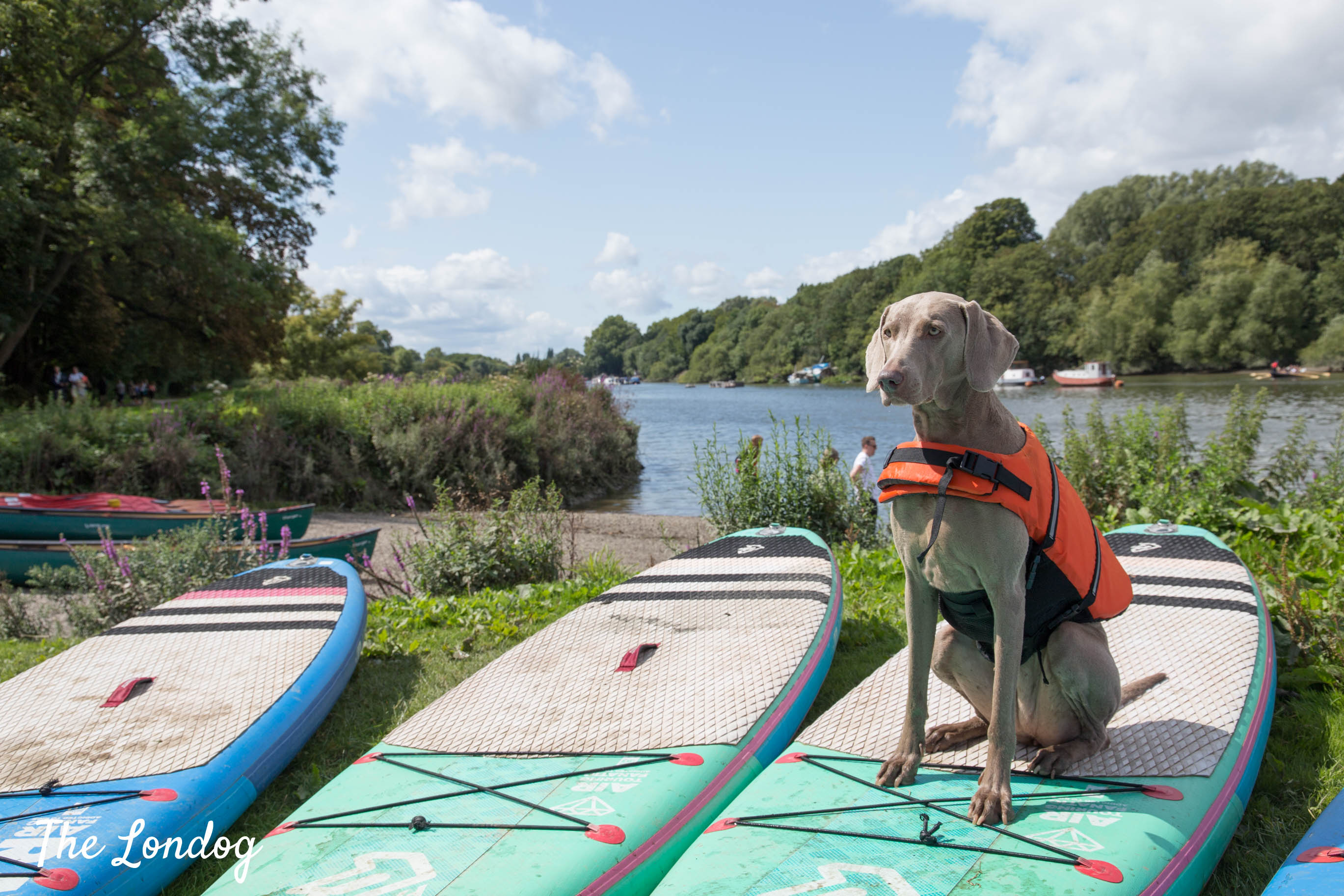 SUP With Your Pup latest session, a dog-friendly stand-up paddle boarding event hosted by Back of Beyond Adventures took place on Sunday 18th August in Richmond, on the Thames. After telling about it previously on the blog, we went along to report back on it.

SUP With Your Pup event: how was it? 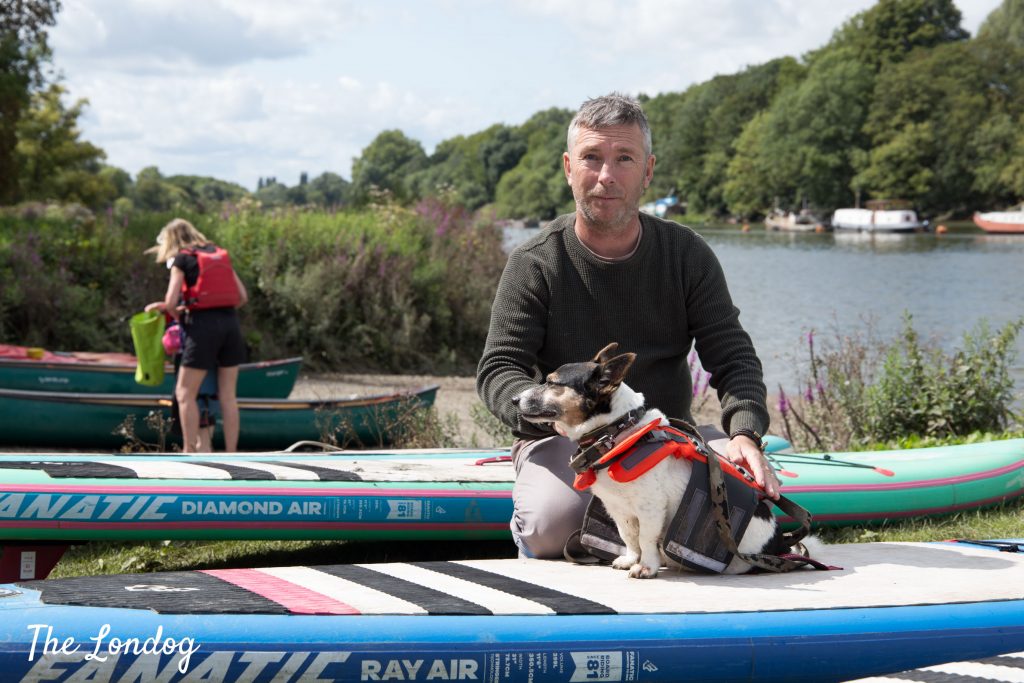 The SUP With Your Pup session had sold out and, on the day, 8 humans and their 5 large and small canines gathered for the adventure. Weimaraner Skylar, Poodle Noodle, Spaniel Rosie, rescue mutt Jordie and Pomeranian Todd, all brought their life vests and were soon ready for the adventure! 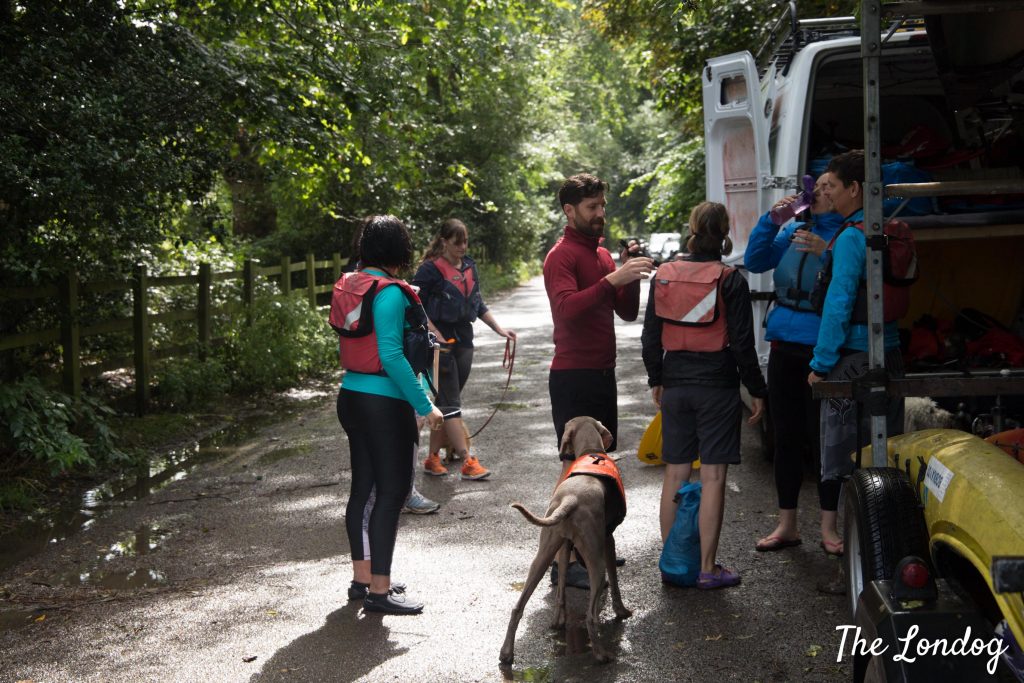 The morning hadn’t started under the best star, with grey skies and rain pouring down. But as everyone arrived at the meeting point in River Lane on the Thames, rain showers eventually stopped and the sky slowly cleared, leaving the place to sunshine and warmer temperatures.

Instructor and founder of Back of Beyond Adventures, Piers, invited everyone to form a semi-circle on the green next to the river for a briefing, with paddles and boards on land. He explained how to paddle, stop, turn, and all the tips of the case, including what to do in case of a fall in the river. Participants also received a life jacket each and were instructed about how to wear it correctly. 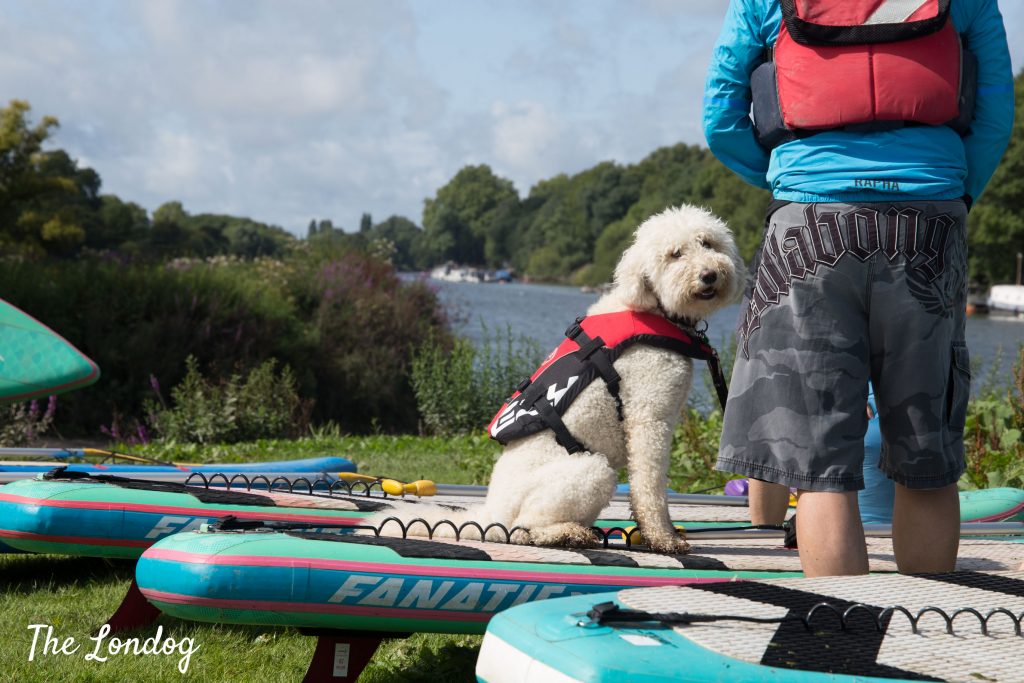 Noodle. Such a good boy!

As the briefing ended, everyone was given the task to fit the fin on the SUP and get the dogs on the boards while still on land, so they could become familiar with it. The dogs jumped up and down and were chilled out. 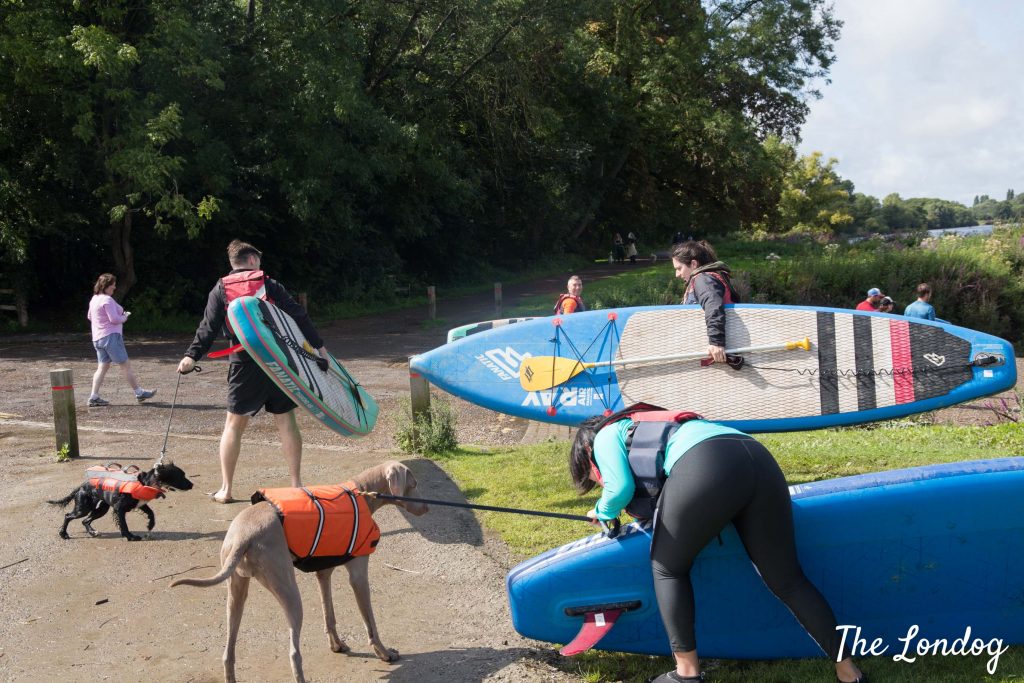 The next step was bringing the boards down the slipway, where Piers put his into the water and gave a demonstration of how to get on and paddle, also aided by his dog Ty (short name for Tycheros), in front of everyone.

Tye is a two and a half-year old rescue Pointer cross from Cyprus, who gets often mistaken for a Vizla and at times follows Piers on his water adventures. Ty, though is no “water baby”, as he walks to the belly but rather prefers to be on the water than in it, as Piers recounts, is very careful at staying still on the board, in between Piers’ legs to avoid wet surprises. 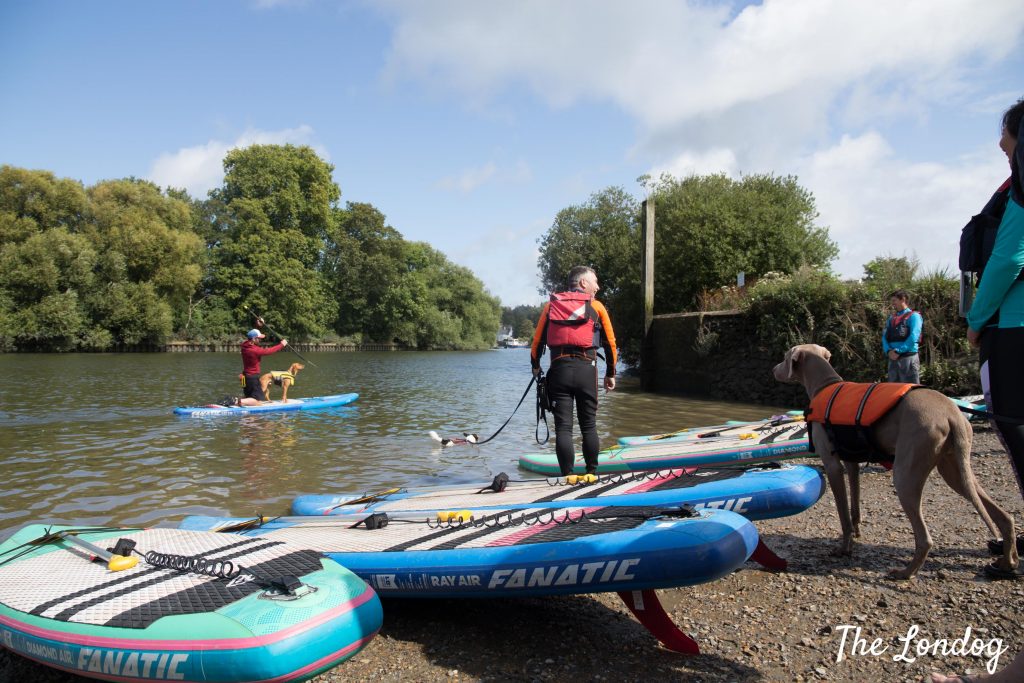 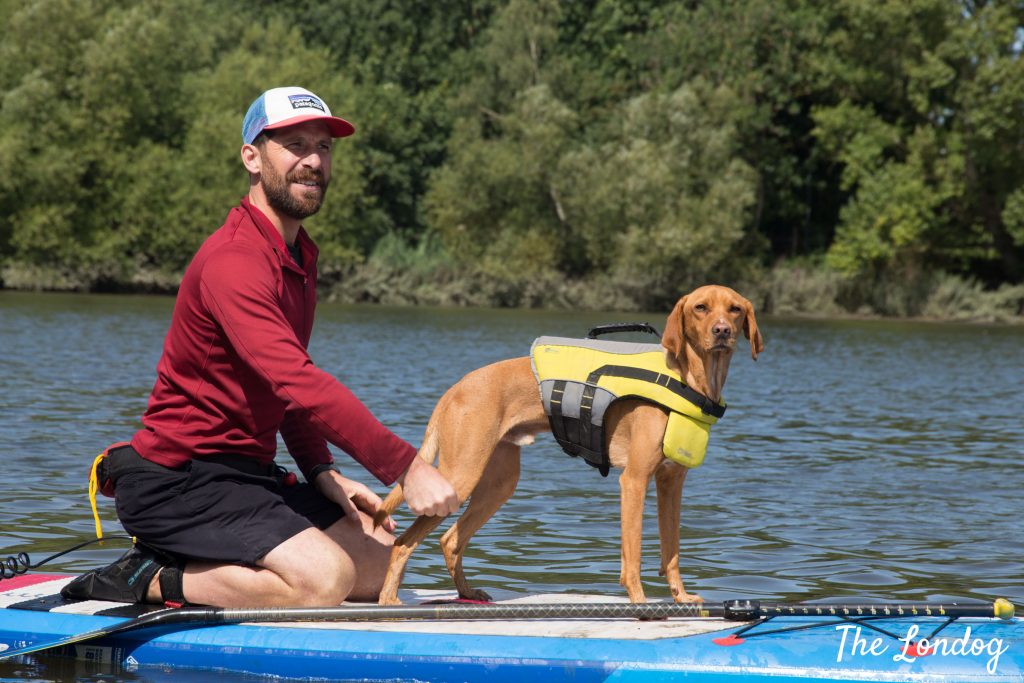 Piers and Ty give a demo

While Piers gave the demonstration, 10-year old mongrel Jordie happily swam in the Thames’ water, while Skylar stared at the board with interest. In order to get onto the SUP, the humans had to walk a few paces into the river and leave shallow waters where the fin would otherwise get stuck and falls could be a bit more risky. 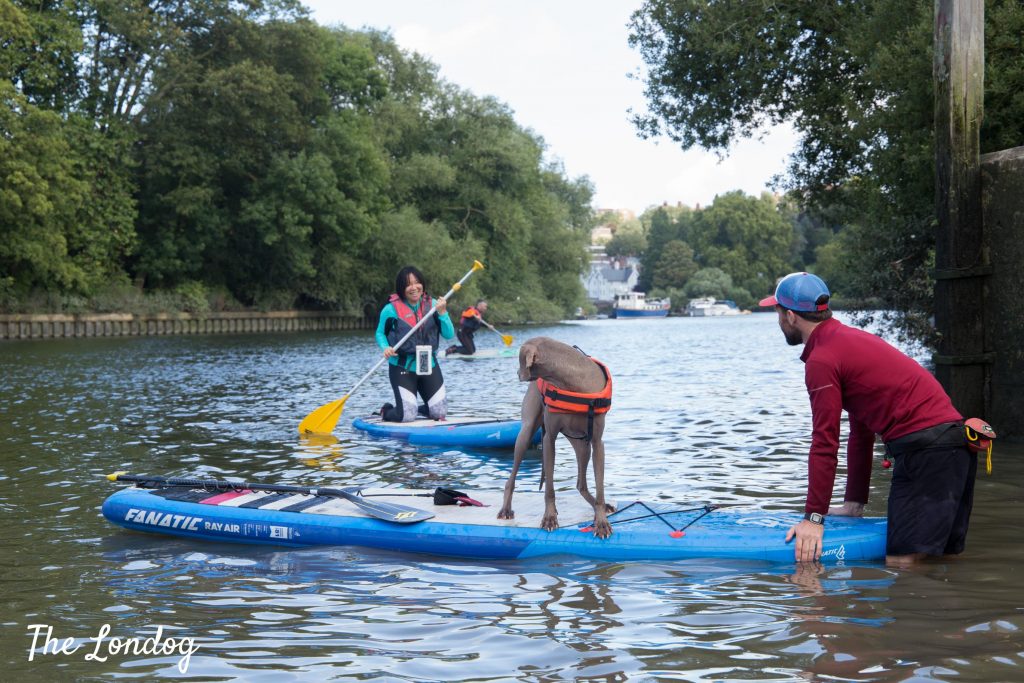 As the humans pushed the board into the water, some of the dogs enthusiastically dived into the river and they were happy to be lifted onto the SUP, like Jordie and Rosie, others, like Skylar, were much less convinced. In fact, Skylar’s first attempt at SUP resulted in her sitting on the board looking at the water,then  slipping a paw down the side of the board and plonking down into the water soon after, sinking underwater and reappearing with a very unamused expression. 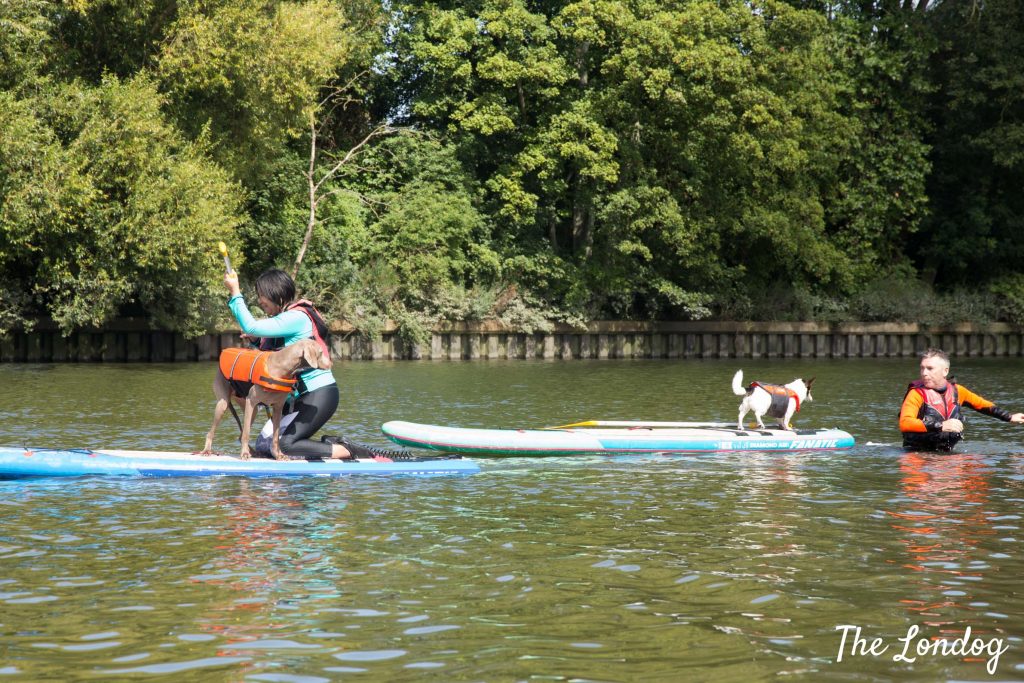 While Piers helped Skylar gaining her confidence on the board, Jordie and his human paddled downstream a bit: Jordie loved a swim and his human later ended up joining in the Thames too, with Jordie looking at him from a dry place on the SUP. 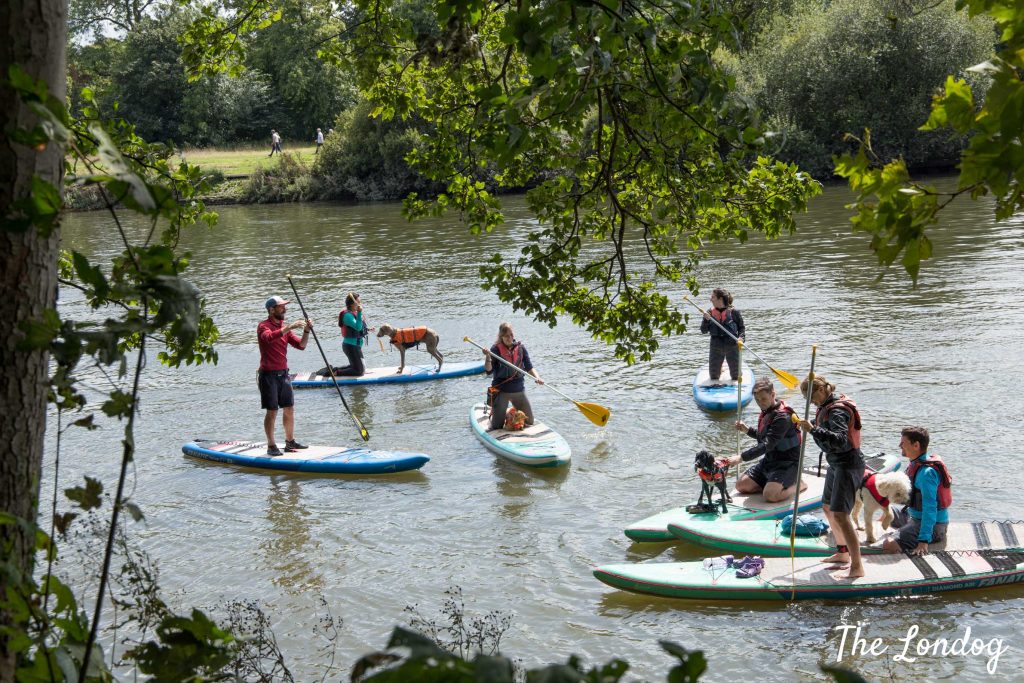 Once everyone was confident kneeling on the SUP, the paddling started, heading upstream towards Twickenham. I didn’t join paddle boarding, instead I followed the group from the riverbank.

With the sun shining and the lovely setting of the Thames, with the backdrop of Marble Hill Park and heather flowers along the riverbank, it was a great one to watch, and in fact many people stopped by, curious about that unsual group paddling off. 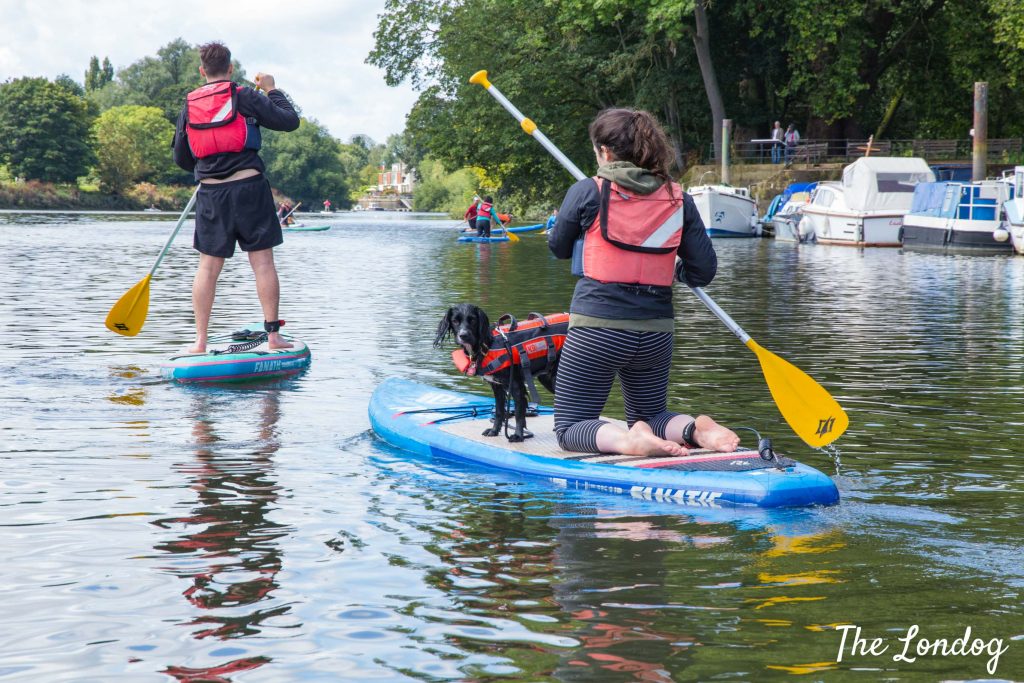 Rosie did love a jump into the water

With their own pace, the group made it down to Ham House, with Piers assisting where needed. They travelled on the right hand-side of the river (opposite Richmond and Ham House) as per Thames direction of travel, and some dogs decided to take a jump into the river at some point.

After a walk on the Thames path, I jumped onto the Hammerton Ferry to cross the river and watch them a bit closer. If you have a friend or partner not joining the SUP adventure, they can do it too: the ferry runs between Ham House Ferry Terminal to East Twickenham Ferry Terminal across the river (the service costs £1 each way – cash only -, is dog-friendly and dogs go free when on lead, otherwise £0.50, £0.50 is also the price for children and bikes, and is runs between 10am and 6pm). 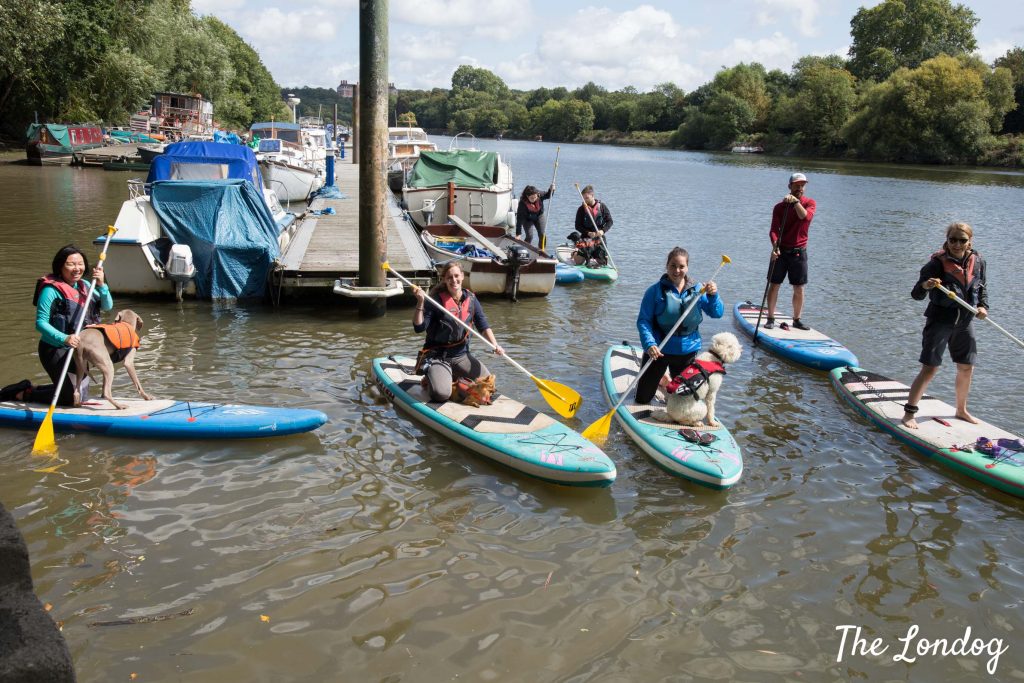 To observe the river rules of travel (right hand-side), when turning to get back, paddlers had to cross the river. Thanks to the flow, travelling back downstream was much easier and quicker, and some of the humans progressed to standing on the SUP. 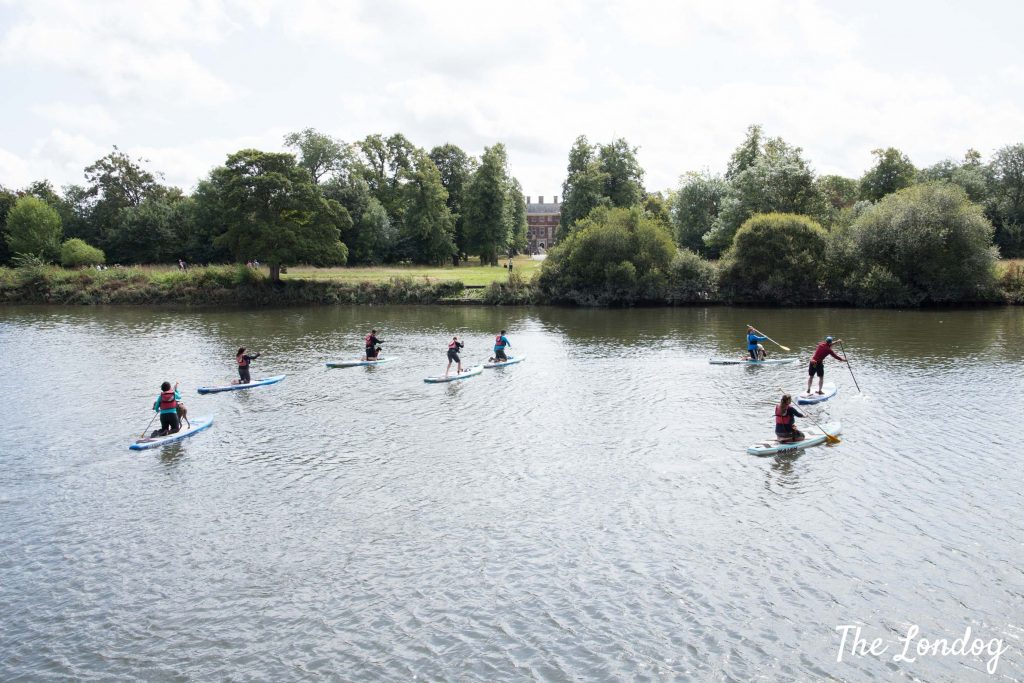 Back to the base a couple of hours later, everyone seemed to have had a great fun, and some expressed the desire to be back. At the “survivors pic”, we counted two humans who fell into the river and four dogs who at some point decided to make a jump during the adventure. Not too bad in the end. 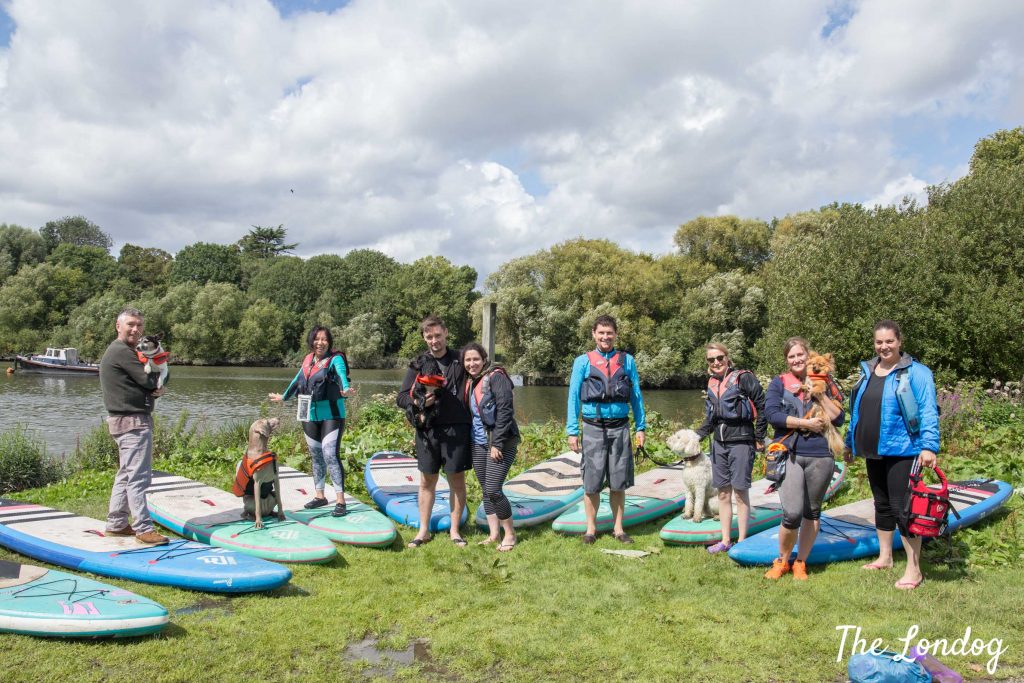 The dogs seemed happy about the adventure too! 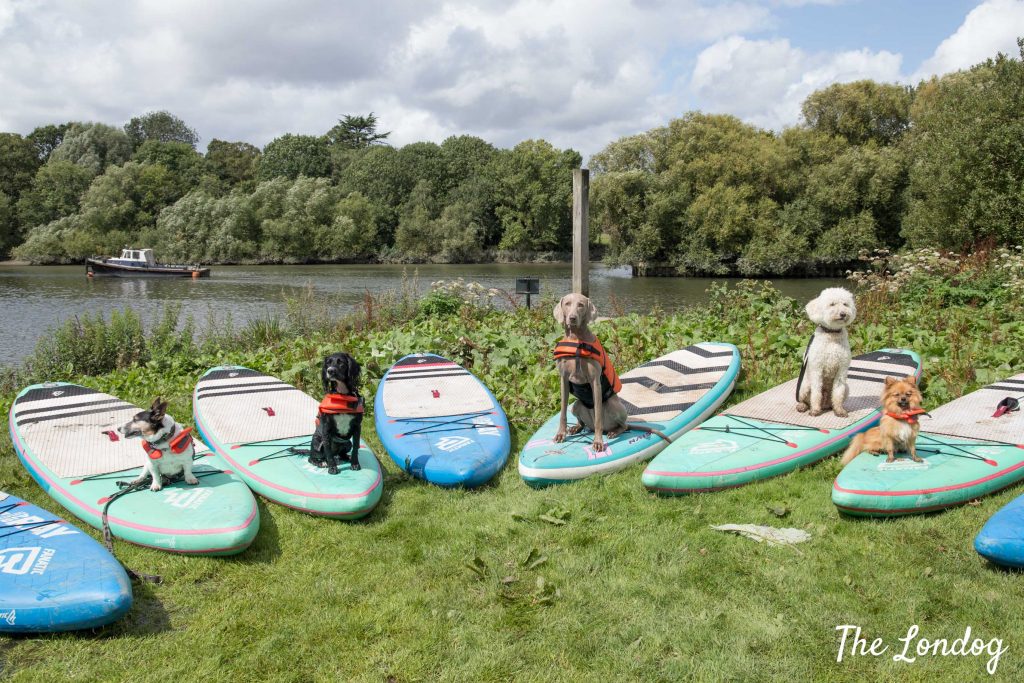 The dog pack after SUP

Next SUP With Your Pup session & other dog-friendly SUP opportunities 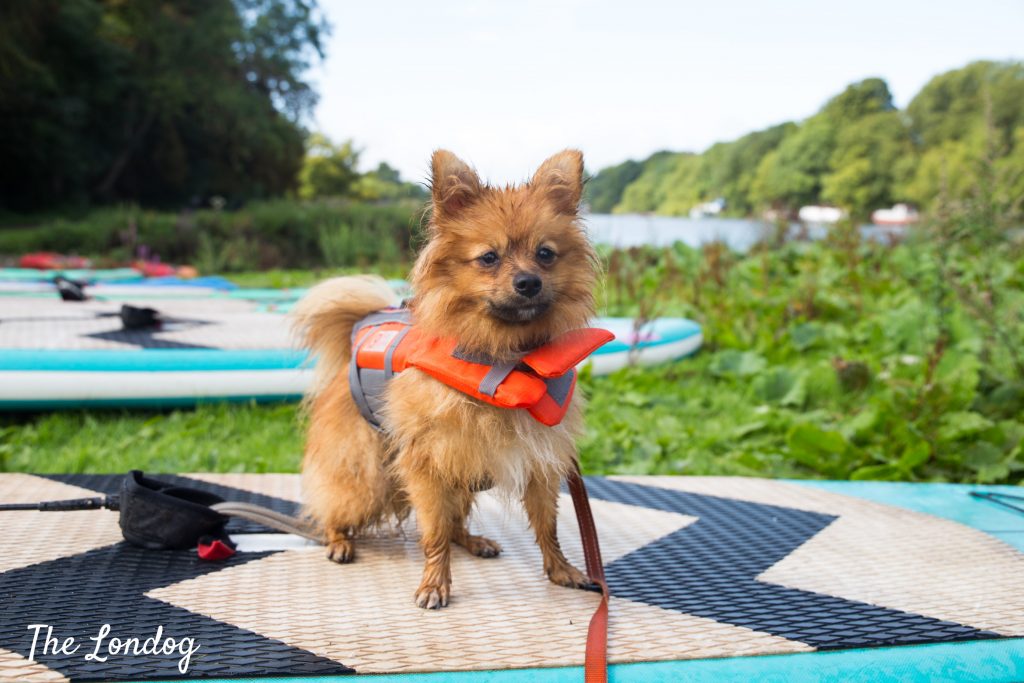 Back of Beyond has been hosting SUP With Your Pup sessions for the last few years, after a number of unofficial dog-friendly sessions and interest from regulars. Check out our Dog Events Calendar for information on the next dates.

As they are keeping the group small and there are only 8 spots available, booking quickly is essential to avoid disappointment (if after the announcement you don’t see the date in the ‘Book Now’ section of their website any more, generally this happens when the session is sold out). 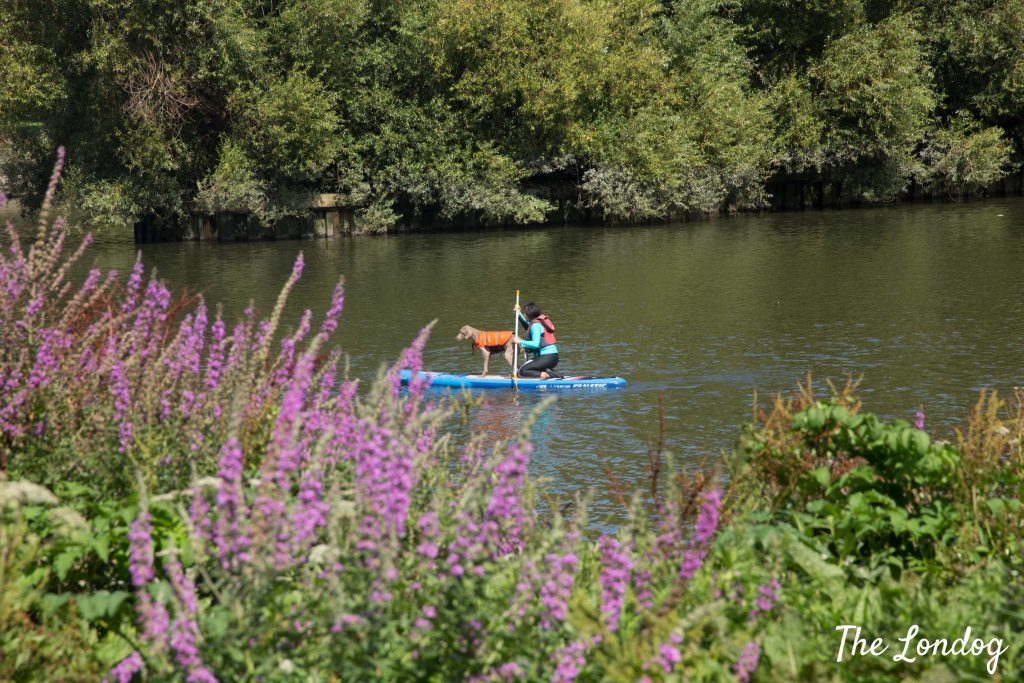 If you feel that you’d like to become more confident with stand-up paddleboarding before trying to add your dog to the equation, you can book a SUP lesson (these are meant to be without your dog) and then book a SUP with Your Pup one later.

On the other hand, in case you are an experienced paddle boarder and so is your dog, having already attended a session, you both can also join the SUP Socials that are held early mornings or at sunset (you can book through Back of Beyond’s website).

Have questions? Ask them in the comments box at the bottom of this page.