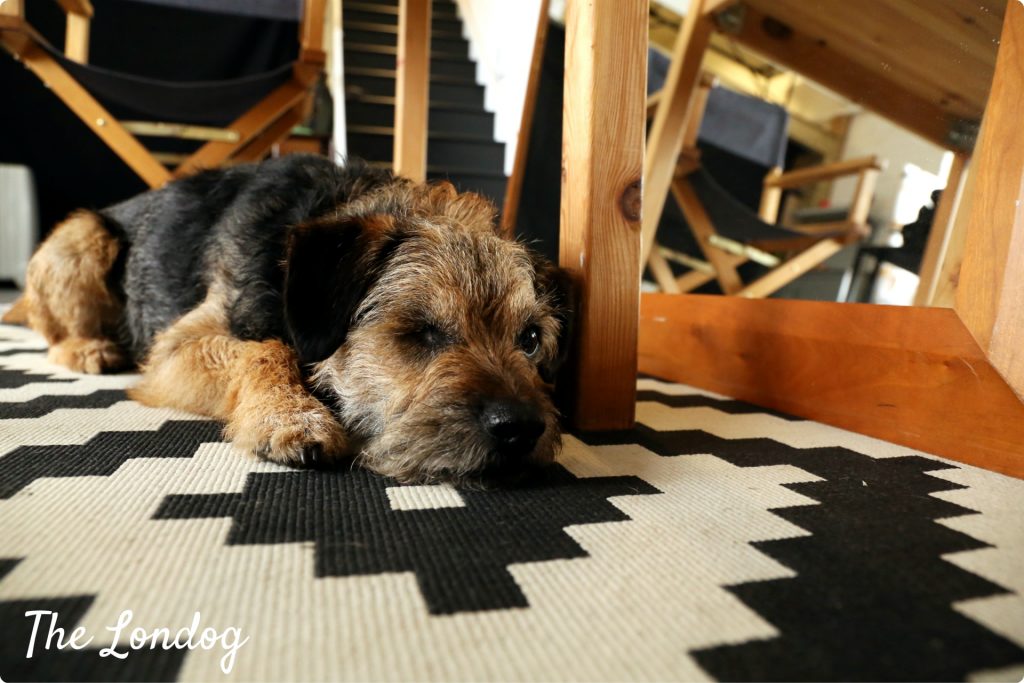 Dylan Collard is a very talented people & location advertising photographer (represented by Vue) who brings his seven year-old one-eyed Border Terrier, Amos, to work with him at his South London Studio. I have known them for about two years and simply adore the couple.

Apart from his corporate clients and jobs, Dylan is also currently working on a personal Black Dog portrait series. I was lucky to be able to have a sneak peek at the photos he shot so far – which are absolutely stunning – and I can’t wait to see it completed and shown in some exhibition! 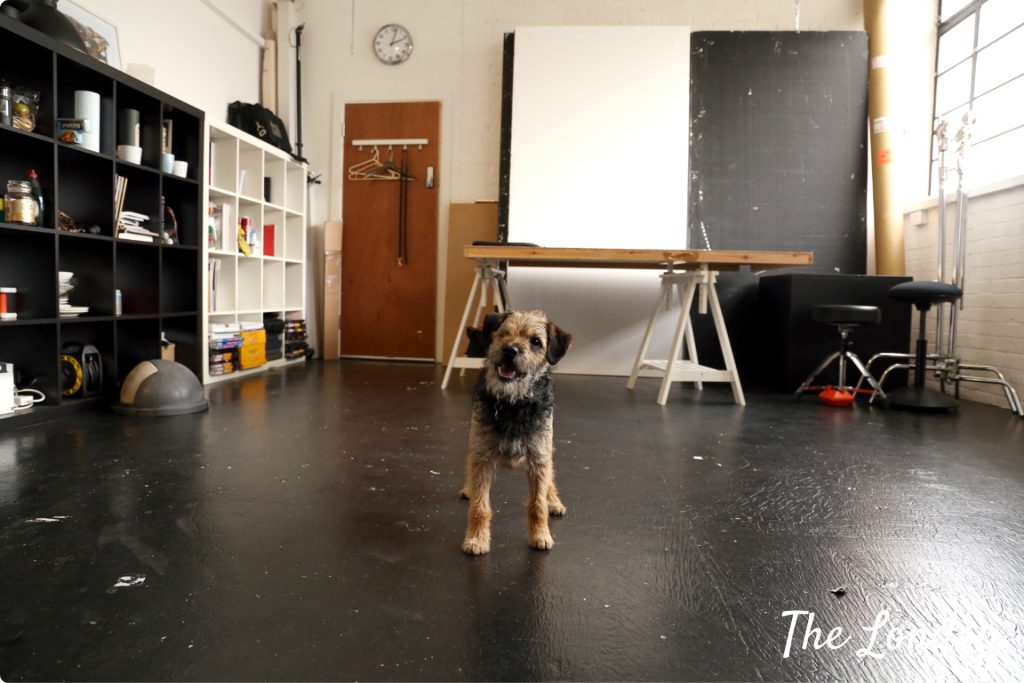 Amos is a very active and happy little chap. He has an inestimable love for sausages and for wondering around while having fun. The eye surgery he had to undergo due to health issues did not stop him from being absolutely enthusiastic about life and all activities Dylan involves him in.

He is incredibly well behaved and will very sweetly curl up between your legs if you lean over to give him a cuddle and whine asking for more! You would never tell that Amos was once a little dog hurricane – which was the reason why Dylan became interested in dog training/sports -. As in photography, Dylan aims for perfection and the couple ended up competing (with excellent results) in obedience and working trials.

Amos has loads of nicknames. “I try not to use his name too much so I just make up things that pop into my head. Consequently some of the names are unrepeatable but other are things like, “Buggerlugs”, “Bum Fluff”, “Noodles” (I like noodles), Monkey Nuts, Nut Job, Bubba, Bubba Boo, Boo, Bum Fluff, Scruff Pants, Peanut, Hooligan”, said Dylan. 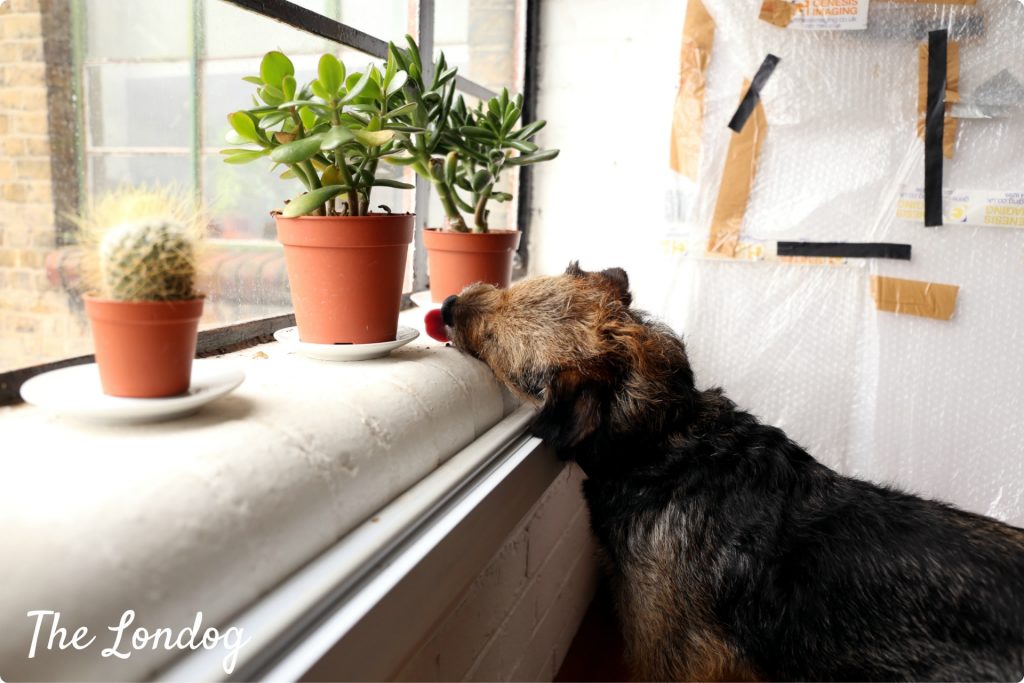 Amos is also known for

Loving: “Chasing squirrels, chasing cats, shouting at foxes, chasing things I throw for him, marking, going out, training, going out training, sausages, more sausages, people, people with sausages, footballs, someone else’s football, tennis balls, someone else’s tennis ball, having a
snooze, cuddle time on the sofa, belly rubs, the seaside, tea time, breakfast time, the floor mat by the front door!”
Hating: “Pushy dogs, step ladders, folding bikes, skip trucks.”
Funniest habit: “When you turn him upside down he groans like one of those old cow noise tins!  When we go out and he loves to role on, dig into the door mat while “singing”.”
Most annoying habit: “Scrounging for food when we’re out that then makes him sick!!!” 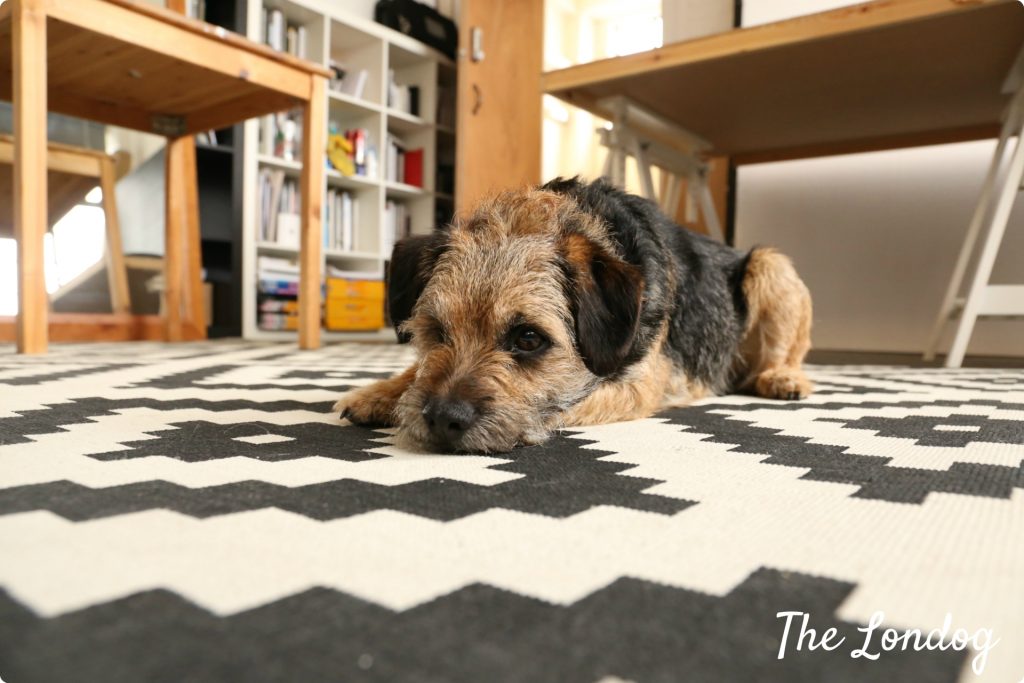 Amos’ studio life started when he was about 12 weeks old, “before then I used to carry him down to the Underground to get him used to the noise, trains, people, etc. He loves going on the Underground, there are lots of people to say hello to and every now and again Tube Mice. He’s quite fascinated by them”, said Dylan.

When at the studio, Amos loves to nap in a couple of favourite spots and enjoys following Dylan when he goes and prepares tea in the communal kitchen. He runs down the corridor carrying an empty plastic bottle in his mouth and then looks at you panting and smiling. 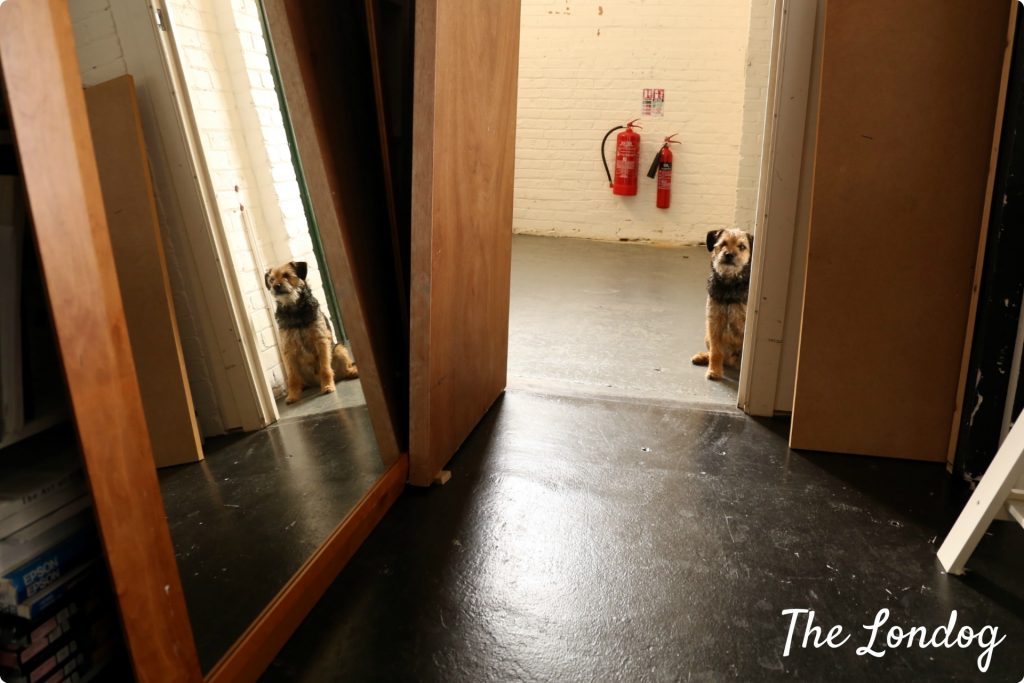 “He pretty much sleeps all day”, recounted Dylan. “We get in around 10 after a long morning walk, and he settles in his crate and sleeps until lunchtime. I know it’s lunchtime because he wakes up, has a good stretch and then quietly sits behind me staring at the back of my head! Then we go out for a quick walk depending on how busy I am, [after which] he’ll settle back down and sleep through till 4ish when he’ll get up and ask for a cuddle and then go back to sleep until 6.30”.

But Amos also enjoys a good game. “Amos loves playing with his toys on the mezzanine above my office, he especially love throwing them up in the air so they bang back down on the wooden floor and scare the crap out of me!” said Dylan. “He was very interested in a stuffed rabbit we had in the studio recently: he approached it very slowly and, obviously confused by its lack of or plain strange smell, stuck his tongue out and very gently licked it.” 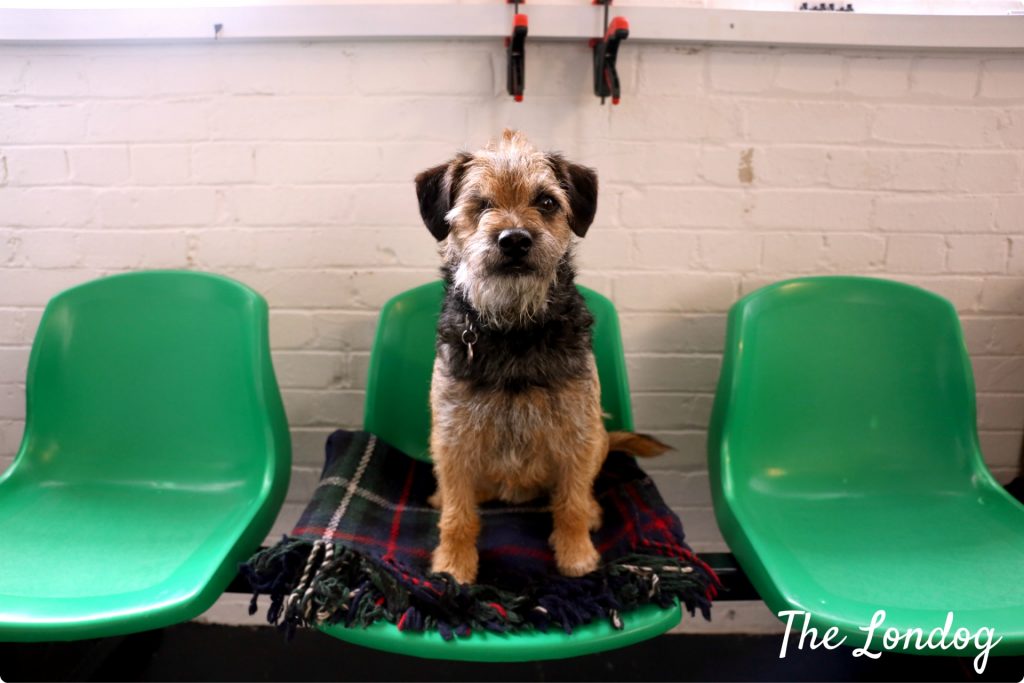 Under the Studio’s windows there is a three-seat green bench. That is the bench Dylan has been travelling with in the US for an interesting project of his entitled “Ages of Us” (some of the photographs from which have just been on exhibition at Foyles).

Amos very patiently posed on the bench to have his photos taken and there was this hilarious moment when I ended up with a piece of sausage on the top my head. This was obviously very useful to keep him focused and stare at me like I was food myself, but at the same time quite awkward! Dylan joked that the “Sausage hairpin” should be probably patented asap and could make a fortune being sold to dog photographers. 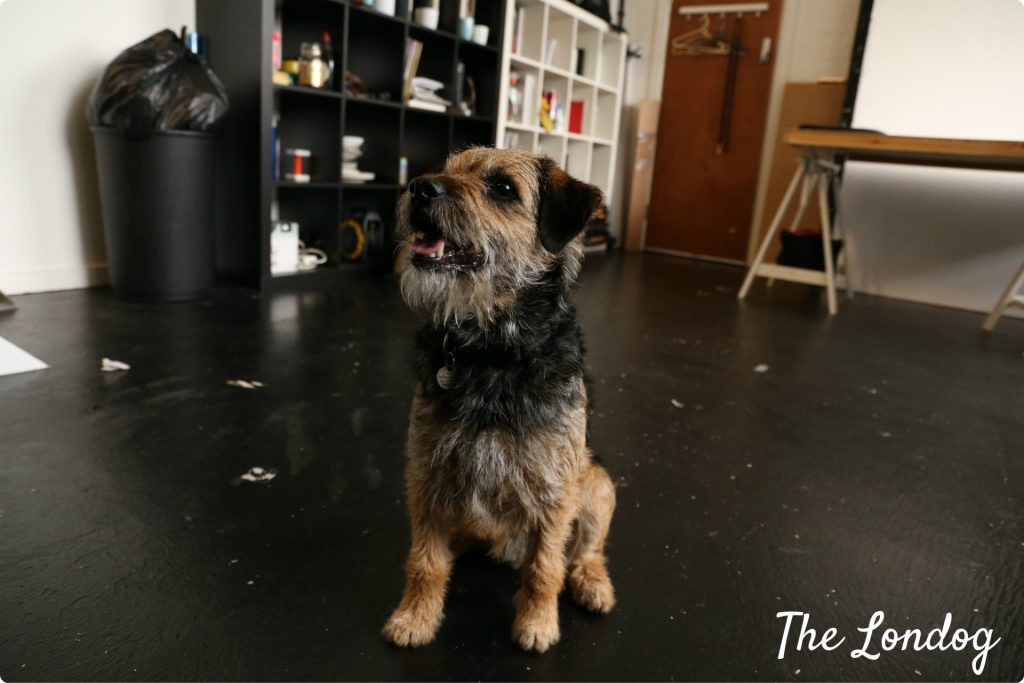 Amos also boasts some good meetings experience. “I do take him to meetings, he’s very good a charming clients, much better than I am!”, recounted Dylan.

“Once I took him to an agency PPM/meeting for a big advertising job I was doing for ESPN. There were about 25 people in a board room all sitting around a large round meeting table. It was all very serious and quite a long boring meeting and Amos did what I’d expect and settled down to sleep on my feet. After about 30 minutes and without warning, but perfectly timed to happen at a pause in the conversation, Amos let out a huge contented groan/sigh. I’d say at least 3/4 of the room didn’t even know he was there and it freaked the hell out of them. He then came out to see what all the resulting laughter was all about and spent the next 10 minutes making friends!” 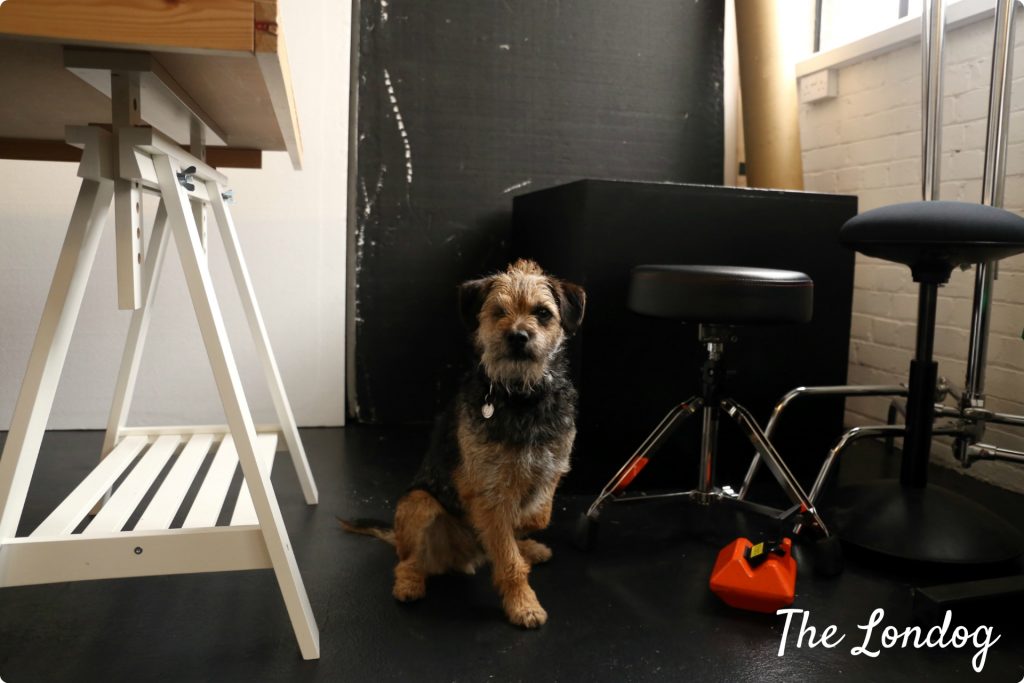 Although Dylan doesn’t often take him on jobs, since he needs his mind focused on the shoot, Amos gets to go on portfolio or test shoots, where he has a great time. “He came on a studio shoot with me not long ago and spent all day charming the models and being cuddled and fussed over, he loved it! Perks are he keeps everyone amused, challenges are getting people to concentrate on the shoot!”, noted Dylan. 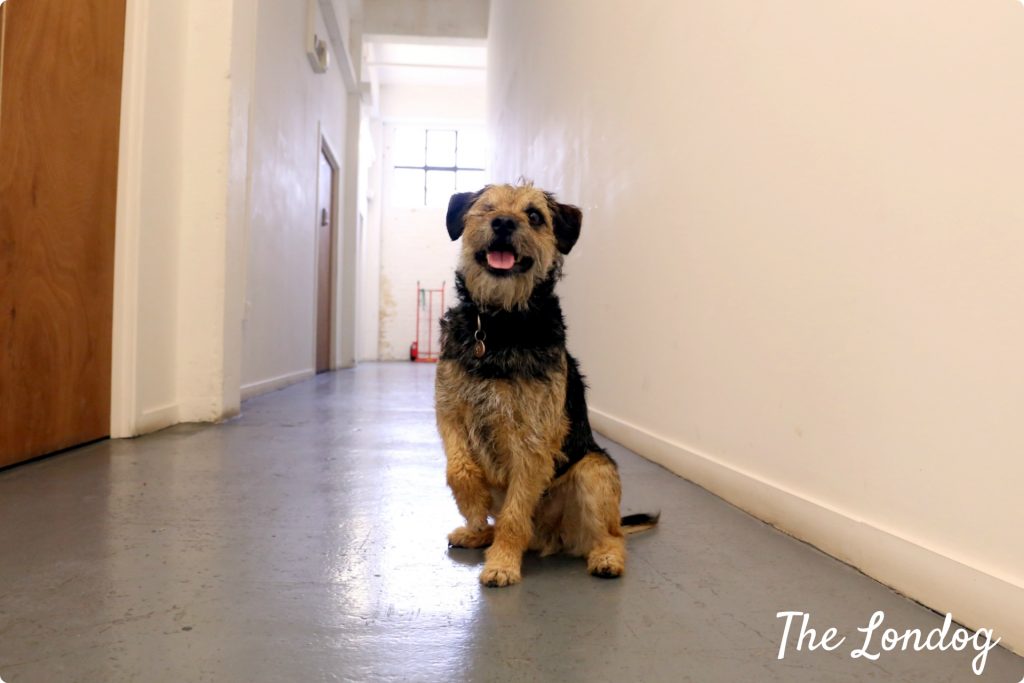 According to Dylan, Amos had a huge and brilliant impact on his routine. “My day starts and ends with him, really”, he added. “We get up at 6, have a cup of tea and wake up and then go out for a walk/training in Crystal Palace. We’re out for at least 90 mins, playing, training, mooching about and chasing squirrels. He’s at work with me most days, and then we come home, have another street walk and our tea”.

“He sleeps at my feet at work and at home and life would be very strange without my little hooligan”, concluded Dylan. “The morning walk was never something I expected to enjoy so much, but I love it. It keeps me fit and gives me time to think as well as play with my dog.”