By The LondogOctober 26, 2016No Comments 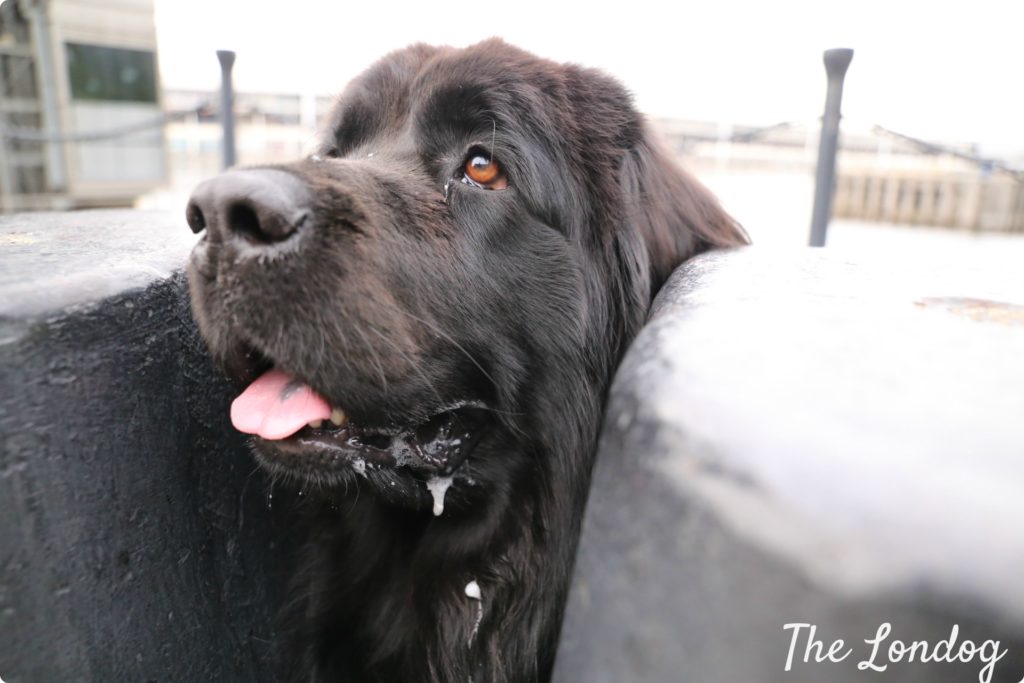 Tons of energy, giant size, very affectionate, a bit drooling. Guess who is it? The Newfoundland dog! Not many people know that Nana – Wendy, John and Michael’s dog – in Peter Pan was a Newfie. And that it was also a Newfie, according to some legend, that helped rescuing people from the Titanic’s sinking. But how does it look like living with a good-hearted giant like a Newfoundland dog?

This is the story of Sashi the data scientist and Lily the Newfie. You will discover a bit about the breed and fall in love with their fairy tale.

Lily is a very affectionate black New Foundland, who, until lately, also used to wear a whole collection of funny bibs, and has a giant stuffed panda. Sashi got her as a puppy. Before deciding to take on a Newfoundland dog, he spent a lot of time researching about the breed. He was first attracted by their laid back and chilled look, he said, “After reading more about them I realised what a great temperment they have and just fell in love with the breed”.

A dog changes your life, and in the case of Sashi, Lily definetly did.

Sashi recounts, “The last two years have passed by very quick – every decision I make, be it what type of car I need to buy, where to live, holidays, going out, etc… revolve around her. I’ve realised how many activities you can do with your dog if they are built for it. I definitely think I spend more time outside since getting Lily than otherwise. I hit 15K steps on almost daily basis walking Lily. Raising any dog is a huge committment and with an energetic dog like Lily even more so – I’m pleased I rose to the challenge.” 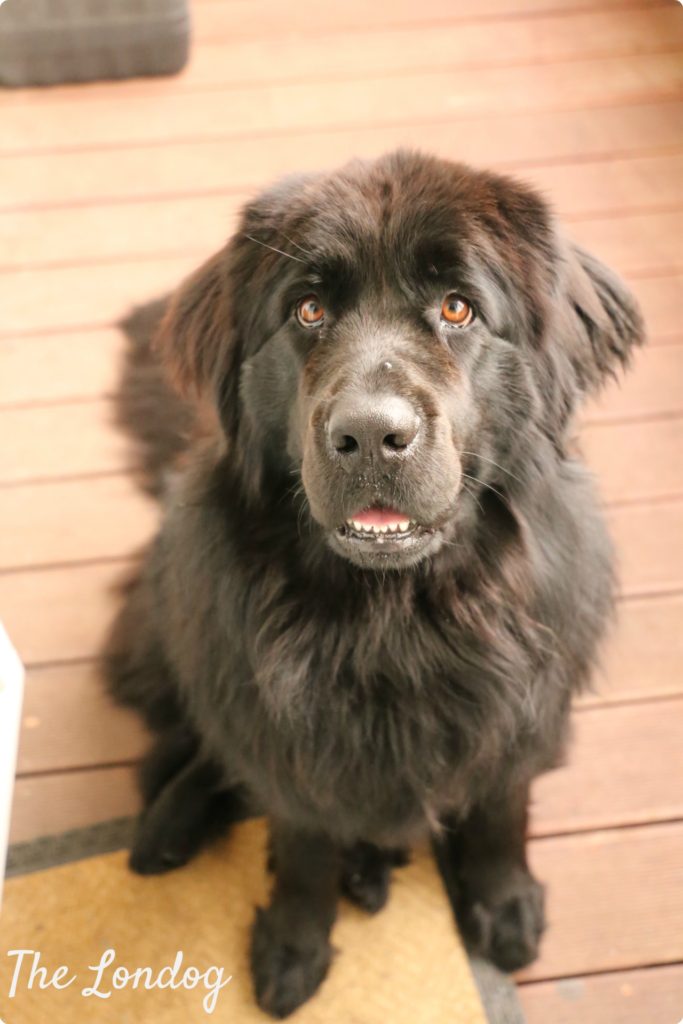 Sashi also started a blog about Lily documenting her growth (you can check it out at lilythenewfoundland.wordpress.com).

“Someone in my dog club commented that I have a sports edition of a Newfoundland dog. I think it is true”, said Sashi. “Lily maybe big but she is compact compared to an average Newfoundland. She may not be the biggest but she is fast. I once clocked her running at 24 km/h for a whole minute straight!”

“I like how she comes an lays down my chair when I work from home. She is a very chill dog – very often some of the smaller dogs will be barking their heads off from the other side of the street when we walk but she walks by as if nothing is happening. If the other dog wasn’t barking she will want to go say hi.”

Sashi gives Lily plenty of exercise, as the breed requires, and has entered a number of dog activities and sports with her, from obedience training to specific Newfoundland trails so she gets to swim, and so on.

“In total she gets a minimum of two hours of walkies each day. On the weekends I sometimes take her for swimming and obedience training classes during the week. She gets a 45-minutes walk in the morning around 6am before I go to work where she gets a chance to run off leash and gets a 30-minutes walk in the middle of the day by the dog walker. Sometimes my friend from the neighbourhood picks Lily shortly after I leave for work then Lily gets to play and run around with his dog, Gladys, also a Newfoundland. Then after I come back from work, she gets another 45-minutes walk in the evening.”

“I’m very proud of her with the progress she has made at the Newfoundland dog club – she has exceeded my expectations in nose work, obedience, and water work – this year will be joining the draught work tests.” 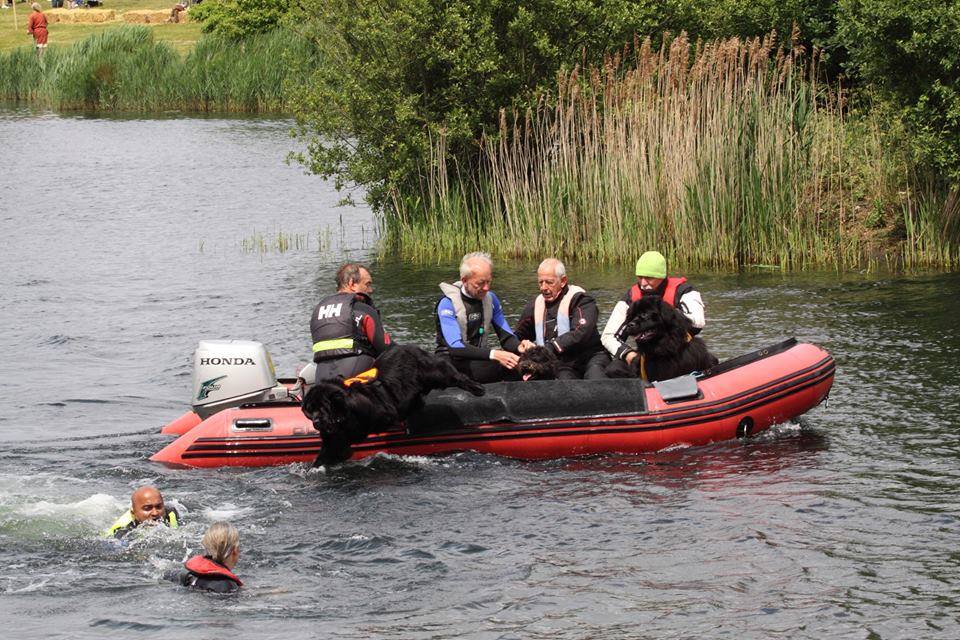 Lily diving from the boat and going on a “rescue” mission

Speaking about exercise, asked what has been the most demanding project/activity he has embarked into for Lily, Sashi said, “That definetly has to be building a cart”.

Why a cart? Because Newfoundland dogs were once used by fishermen not only for water rescue purposes, but also to haul fish cargo to the market once back from fishing expeditions. In order to do so, fishermen built and attached carts to their Newfies and trained them to draught on any terrain.

Today there are other means of transporting fish to markets of course, but carting has remained in Newfoundland draught works. Newfies competing in this discipline build up from simply pulling the cart without any weight for a very short course, to hauling it for a longer and difficult course (up to 3 miles in a partly urban and partly rural environment, with at least two noticeable gradients approximately 10% to ascend and descend) loaded with 20kg for half of the course, 10kg for the another 25%, and then unloaded (you can read the draught test regulations here). 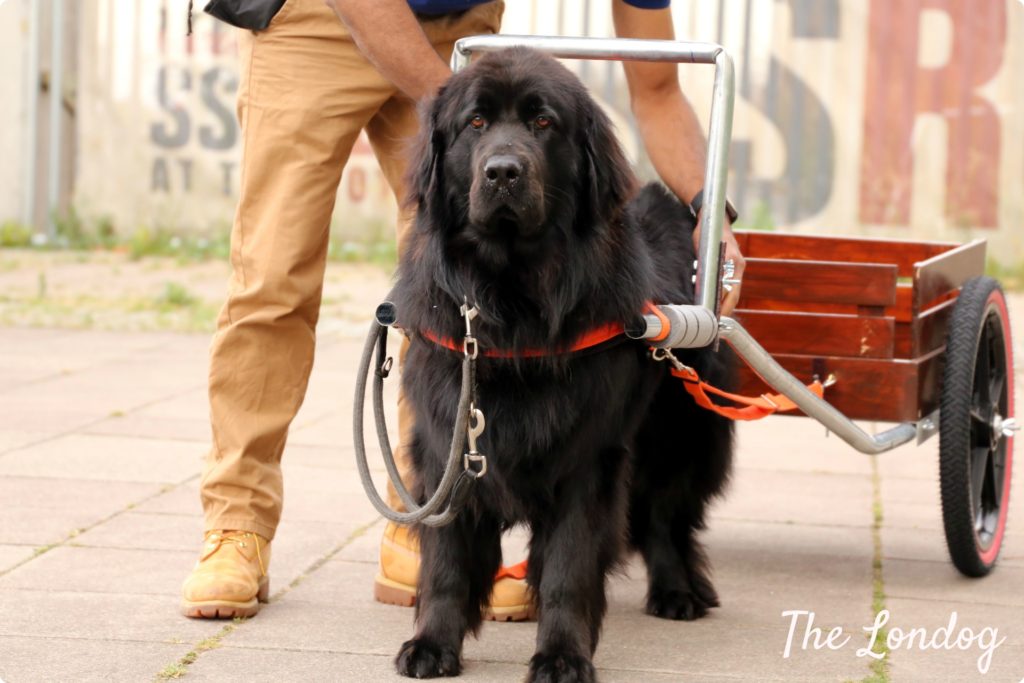 Lily getting ready to haul her cart

Sashi decided to train Lily for the draught works, so he needed a cart.

“Over the Christmas holidays of 2015  I decided I’m going to build her cart and give myself two weeks to do that. Instead it took me 6 months with copious amounts of procastination, but in the end built a functioning cart. This involved some carpentry and plumbing.”

“[The most funny thing] used to happen when she was about year old – where she would run fast and tumble over when cornering. I used to think this is why SUVs are not supposed to be taking turns at high speed! She has lately developed an extra cute factor to get what I’m eating. If I’m eating something she comes and lays her head on my lap and gives that puppy look.”

“The only annoying habit she has is chewing up toilet rolls.” 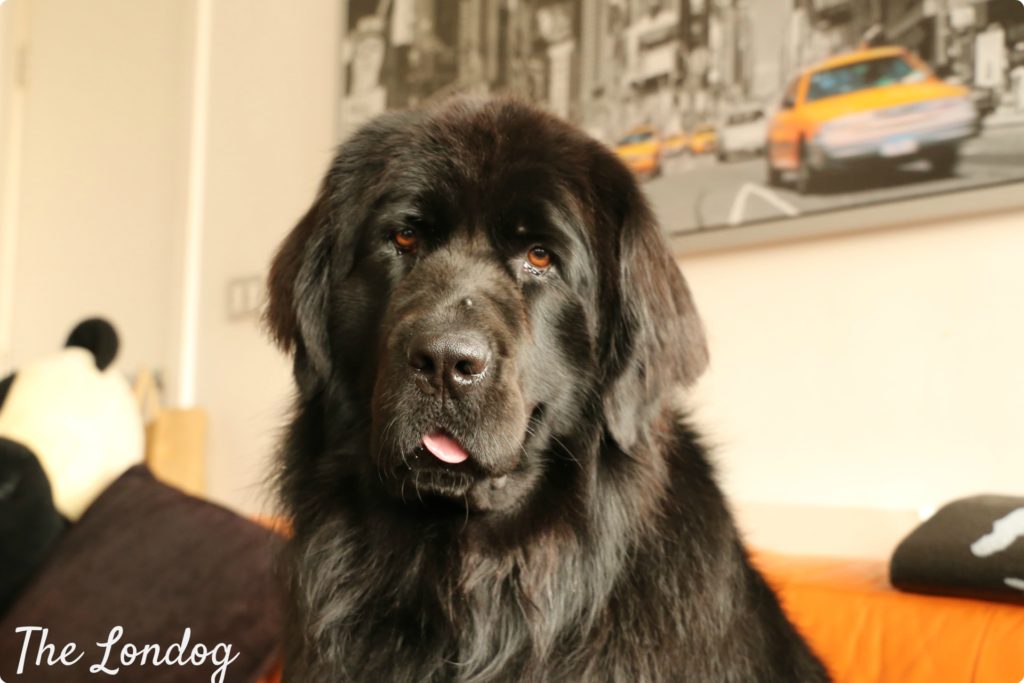 Some advice for prospect Newfie owners

Newfies are great companions, but at the same time also a quite demanding breed. So I asked Sashi, from his experience with Lily, what would he recommend to anybody looking to get a Newfoundand dog.

Sashi: “They are great dogs but you have to do your own research – don’t just go on the looks (those looks take a ton of time to maintain, I groom her almost every day). Speak to as many Newfie owners as you can, even better spend a day or two with a Newfoundland and see if you can put up with the drool landing on the floor, your clothes, dinner plates, etc… See if you can put up with the never ending stream of hair.”

“Consider if you are prepared to do the obedience training – that’s every day at least for the first 3 years. Puppies can be destructive, but Newfie puppies are the size of some adult dogs so consider the damage they can inflict if they are not properly stimulated mentally (you can’t exercise them too much when they are young so you have to find other ways to drain their energy by playing thinking games with them).”

“They are high maintance, so consider your financial situation. With the dog of this size everything is huge. Vet bills are huge – spaying a bitch costs nearly £500, annual top quality insurance costs £2800/year, good quality food (you can’t put them on a cheap diet) costs £120/month. To put that into perspective – insurance alone could cost upto £30,000 over the life of the dog. Groooming costs £50 per visit, although I’ve paid as high as £120 at Pets at Home. Are you prepared for the financial commitment? Obedience classes cost money, dog walkers cost money, doggy day care costs money – these are all the things one has to consider.”

The picture of Lily diving from the boat is courtesy of Sashi.

The Londog. All rights reserved.