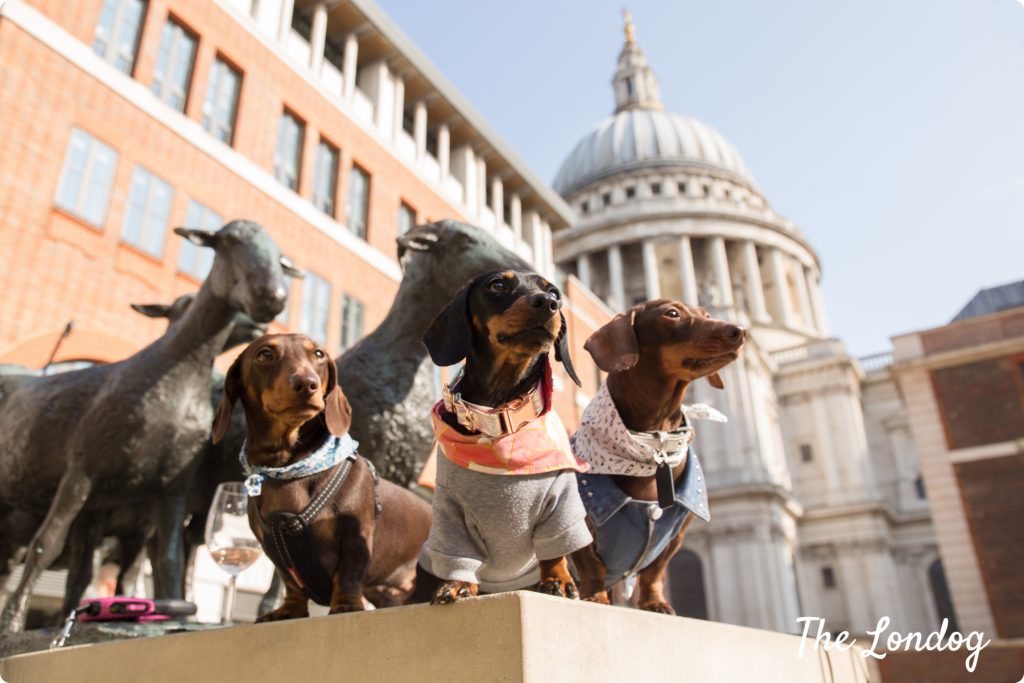 Hundreds of Dachshunds joined the Sausage Dog Parade, a sausage dog ‘meat up’ organised within the celebrations of Smithfield Market’s 150th anniversary, with Sausage Walk London, on Saturday 25th August 2018. Sun and rain, barks and cuddles, this is how it looked like.

Smithfield 150 and the Sausage Dog Parade 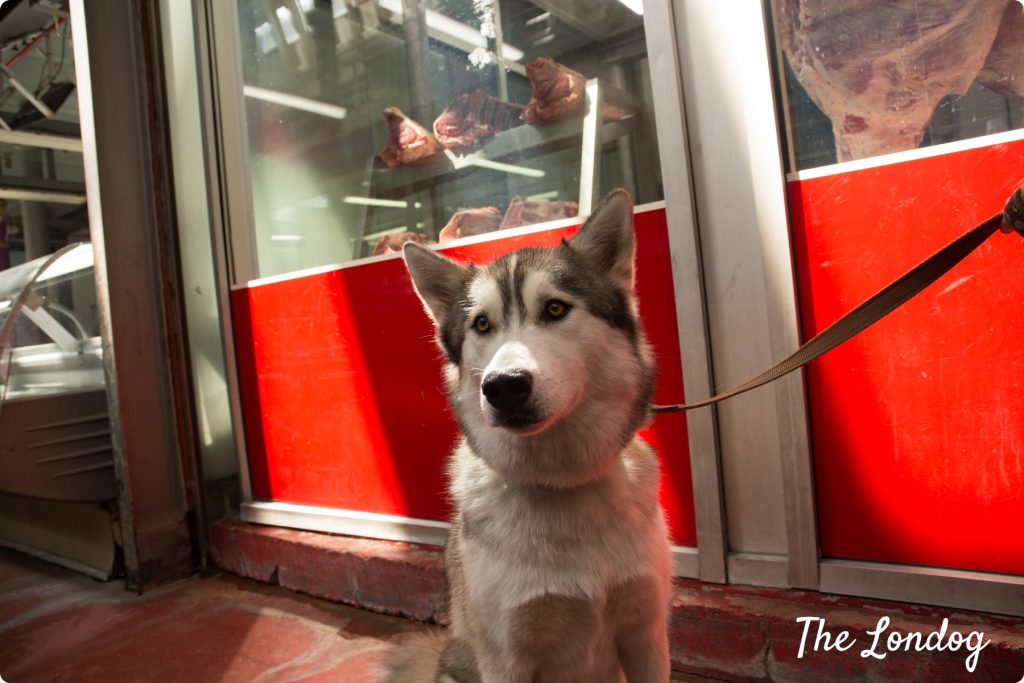 Culture Mile – a partnership of four leading UK arts, culture and learning institutions led by the City of London Corporation – organised the celebrations for Smithfield Market 150th anniversary, taking over the markets in Smithfield as well as the surrounding streets, lanes and hidden spaces around Farringdon.

Within the celebrations, Culture Mile partnered with Mildred the Sausage and George the Sausage’s mums, Grace, Catherine and Katherine, the creators of #SausageWalkLondon, to spice it up with some sausage dog fun. Sausage dog owners and lovers were invited to join the Sausage Dog Parade, taking over the streets around the market, starting in the narrow Cloth Fair in front of the Rising Sun pub and ending at The Happenstance, in Paternoster Square, behind St Paul.

A chat with co-organisers Mildred and George the Sausages 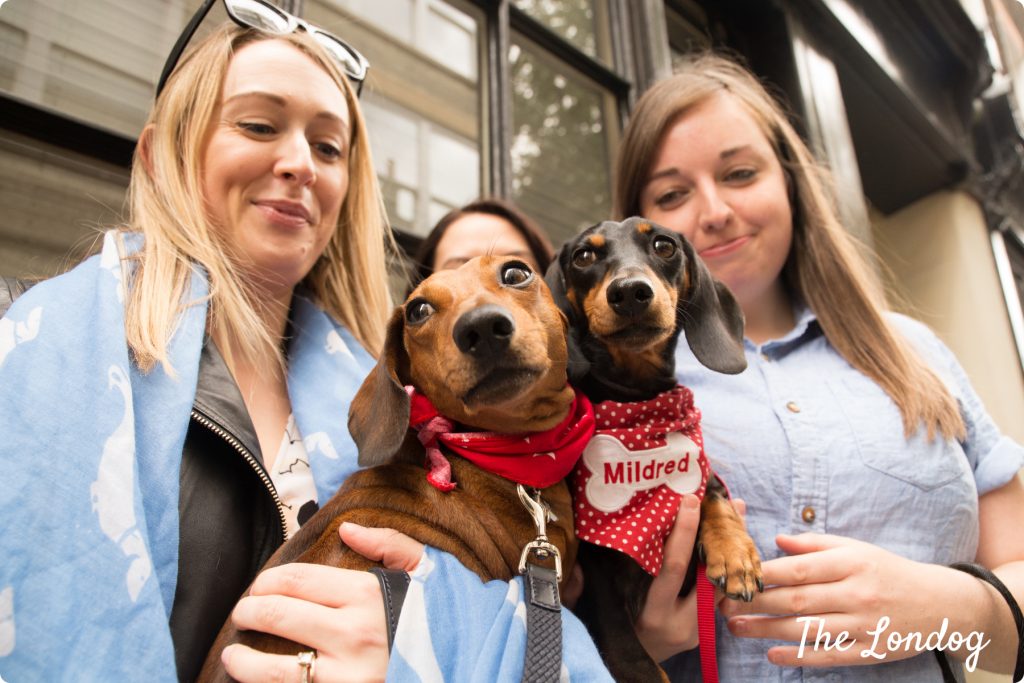 George and Mildred with their mums

As Grace, Catherine and Katherine recount, the Sausage Walk London started in September 2017 and it has had an incredible success, culminating in March’s walk in Greenwich Park, which gathered around 1,000 sausage dogs. “The Sausage Walk London started after we met via Instagram and after a few playdates thought it would be nice for some other dogs to join in. We put a picture on Instagram saying that we were going for a qalk and did anyone want to join, expecting about 20 people. But there were 100…”, they say. After the first one and counting the Sausage Dog Parade, this is the fourth dachshund walk they organise.

Before the start of the Sausage Dog Parade, we met for a chat. If you would like to know more about them, watch this Facebook live video we filmed before the Parade. Spoiler: they also reveal that, at the Parade, no sausage dog would have been turned into sausages…

LIVE from the SAUSAGE DOG PARADE (soon to start)We are here with Mildred the Sausage and @George the Sausage and their mums! Chatting about the #Smithfield150 Sausage Dog Parade starting at 2.30pm! Come and join the fun!Culture Mile #SausageDogParade #sausagewalklondon

The Sausage Dog Parade between sun and rain 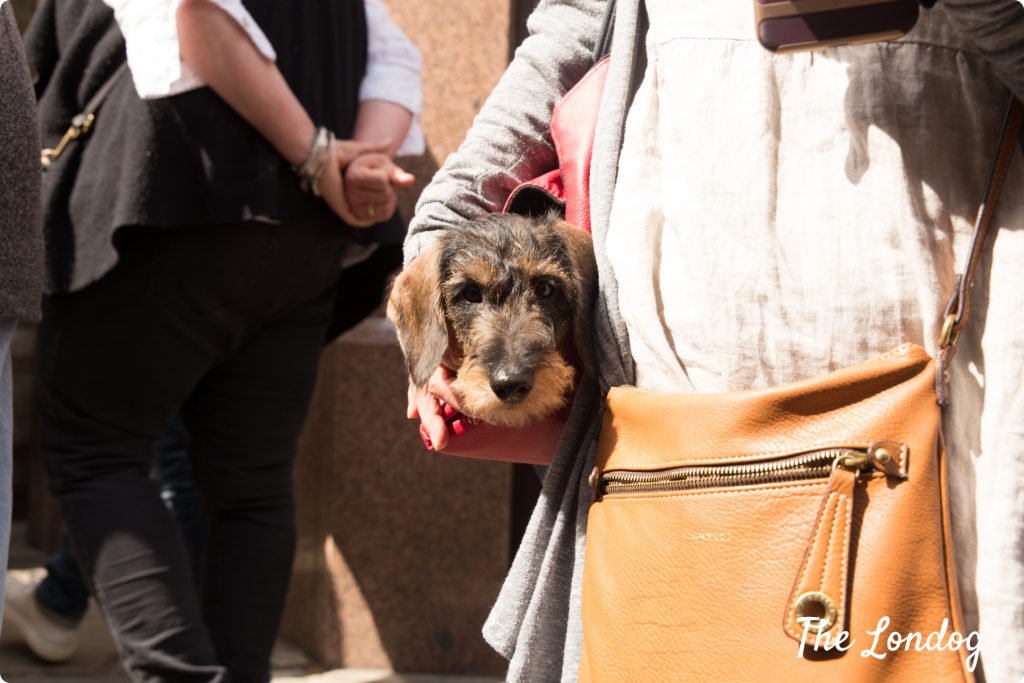 A crowd of Dachshunds of all sizes, types, coats and ages and their humans started invading Cloth Fair well before the start of the Sausage Dog Parade, so it was time for a play and a bark all together. 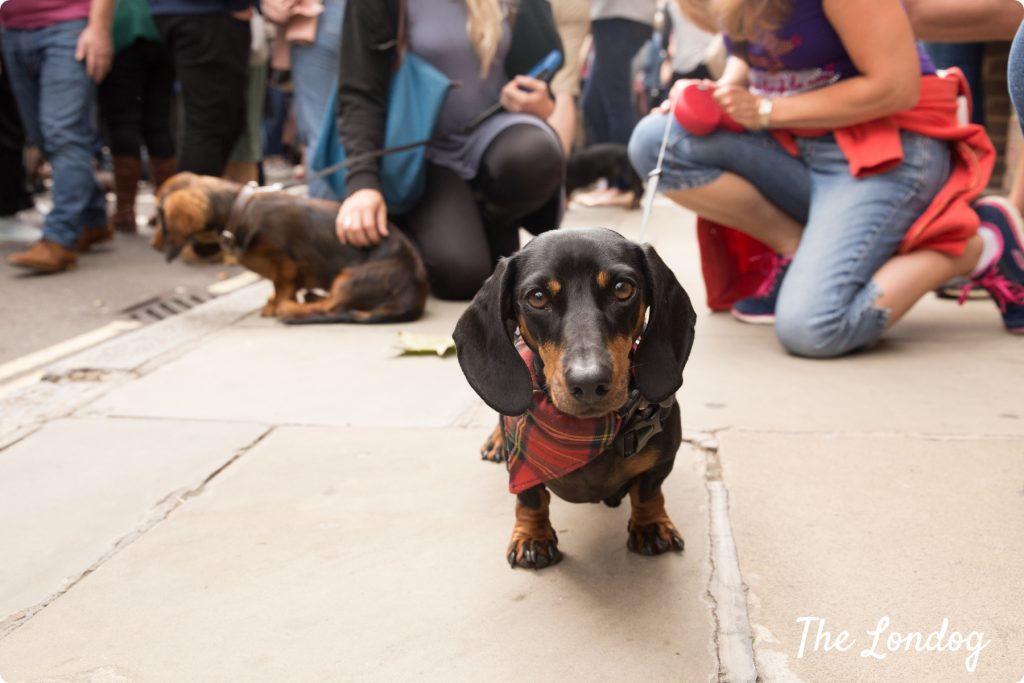 Despite a wonderful and clear morning, just minutes before the start of the parade, London’s weather decided to play its part, bringing heavy rain showers which marked the start of the walk. But the Sausage dogs braved the weather. Who from a top view position under an umbrella, who hidden in the warm and cozy jumper or jacket of their humans, who simply walking a bit faster and avoiding puddles. 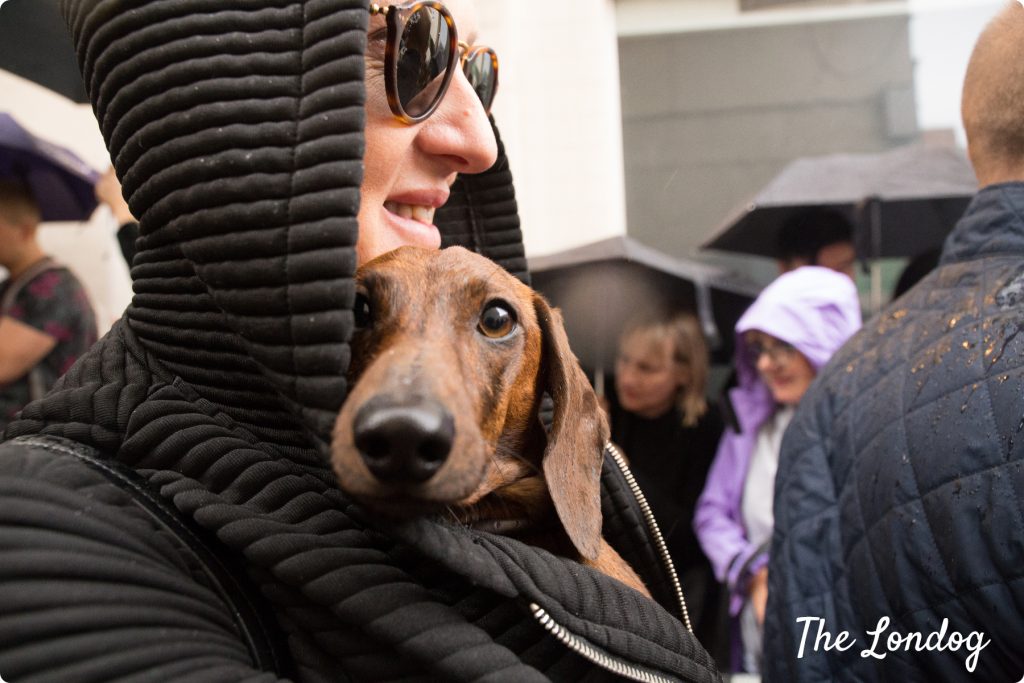 “In true Sausage Walk London style, the weather was absolutely rubbish (it snowed the last two times) […] but the dogs still had a great time being papped and cheered by spectators!”, commented Mildred and George’s mums. 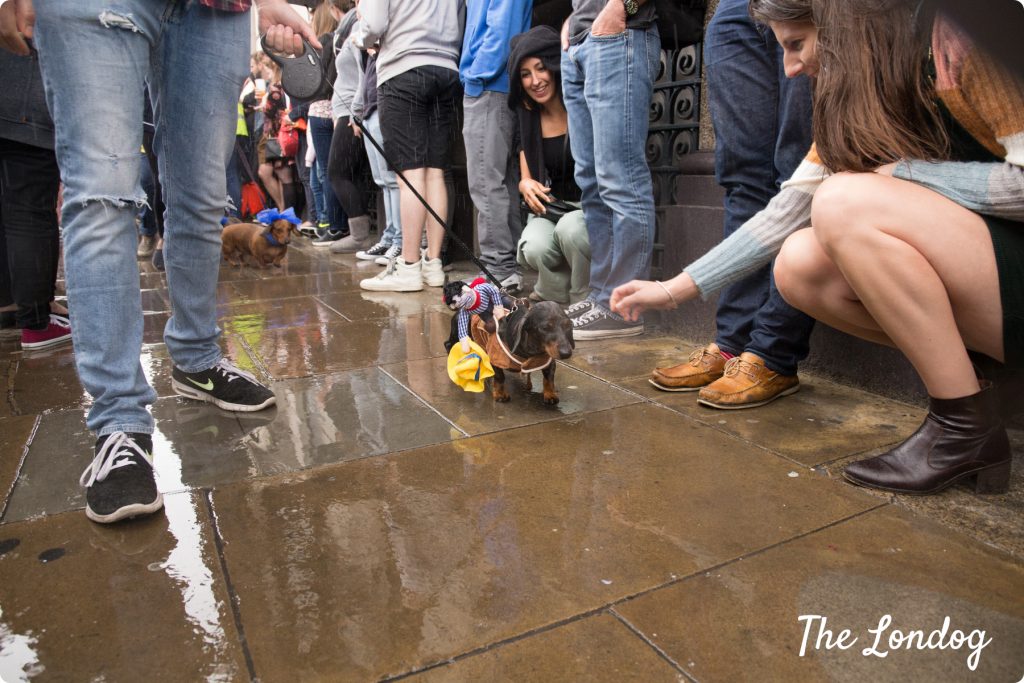 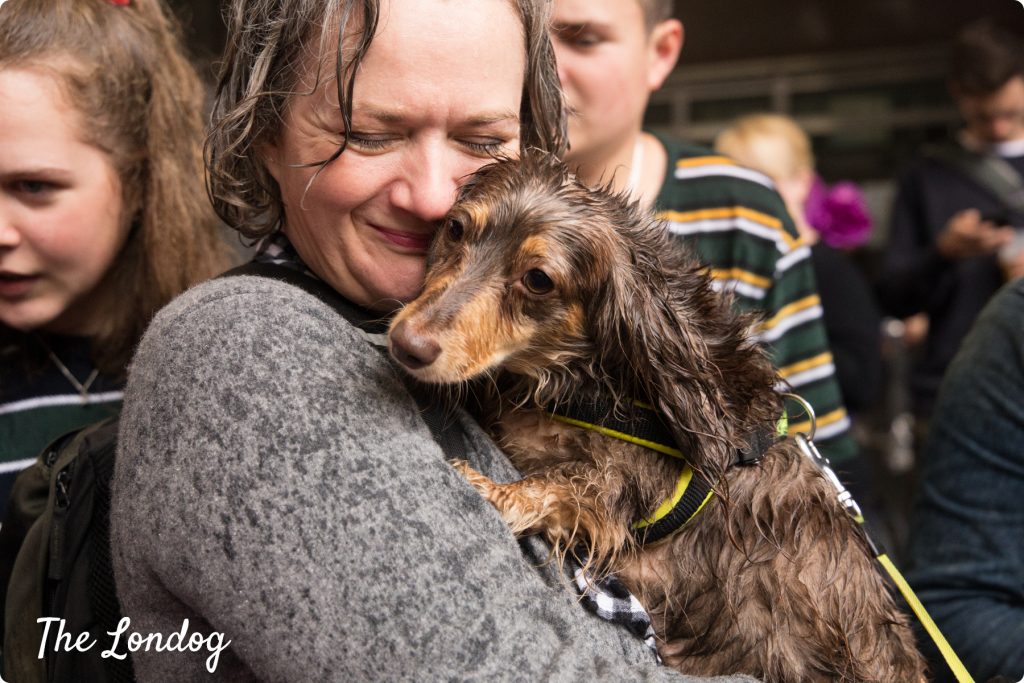 Dachshunds were the rightful stars at Smithfield 150 and so many thrilled spectators stood on the sides of the route, taking photos under the rain.

The tail of the group eventually stopped at Smithfield Market to seek shelter and wait for the rain to pass, before continuing the walk towards The Happenstance in St Paternoster Square. Somebody had been prudent and brought an umbrella, but all others – including myself – were completely soaked. 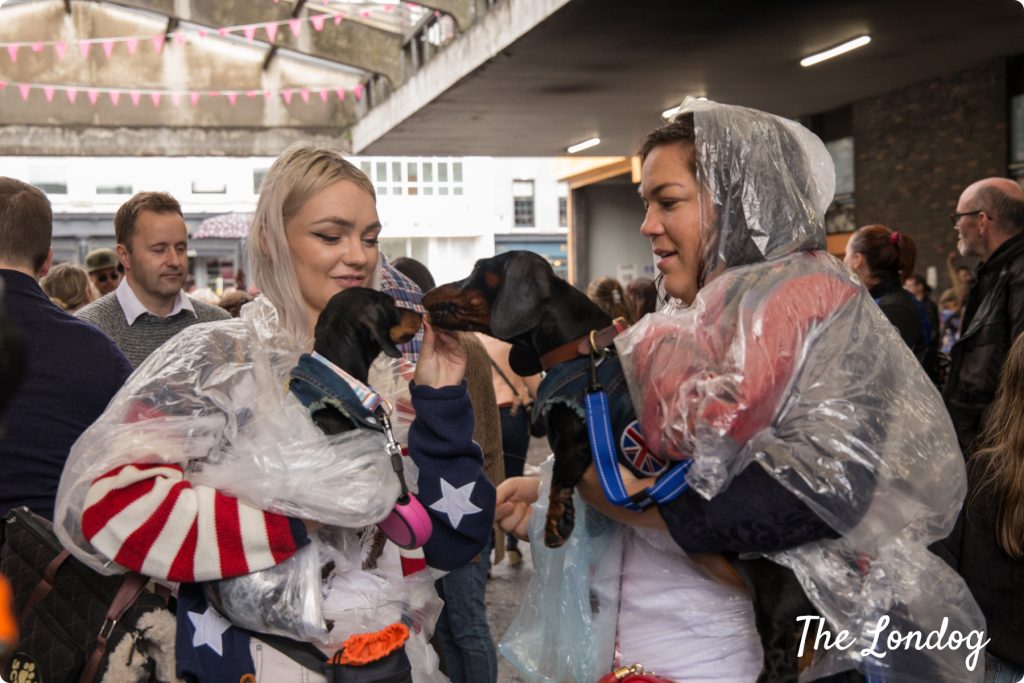 It was lovely to meet some known faces too, like Pops the Sausage (who seems to be a party queen and we keep meeting at all dog events we attend!), Reginald and others. Also a couple of non-sausage dogs joined the walk, including Eska the Husky (in the photo above in this post).

After a while, the rain finally stopped and the last group of sausages were on the move again when the sun started peeking out from the clouds.

Dachshunds take over The Happenstance and St Paternoster Square 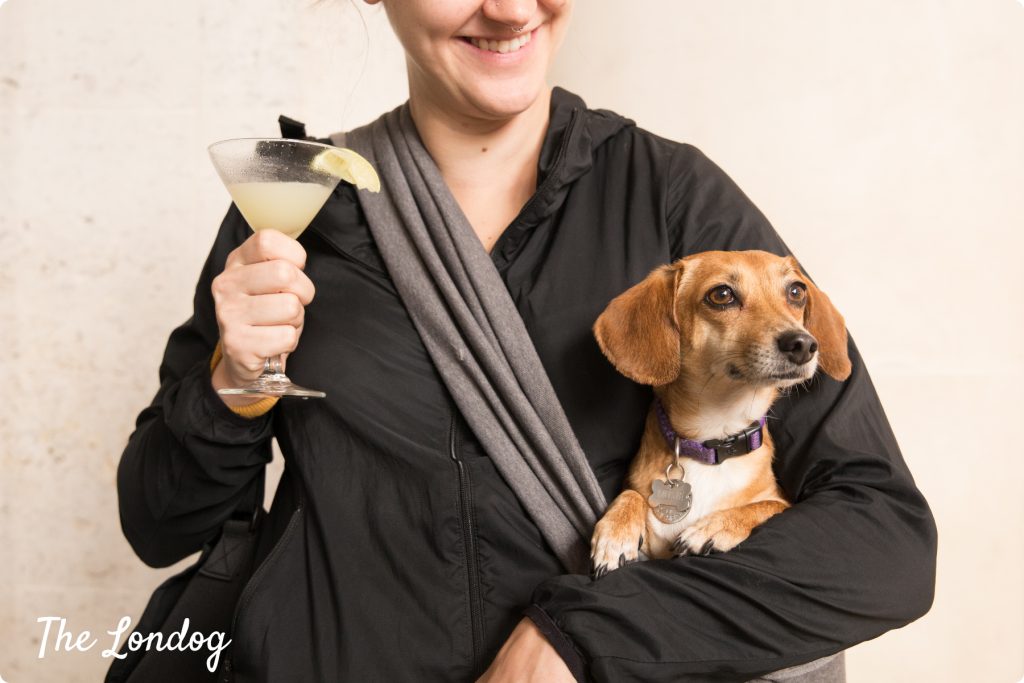 To mark the end of the parade, The Happenstance welcomed tens of dachshunds in a dedicated part of their venue, and there were bowls and jars of doggie biscuits everywhere! Many others stayed outside for drinks. As soon as the clouds were gone and a warm sun wrapped St Paternoster Square, the square was transformed into a daxie playground, with many short-legged friends also running off-leash, playing and barking. 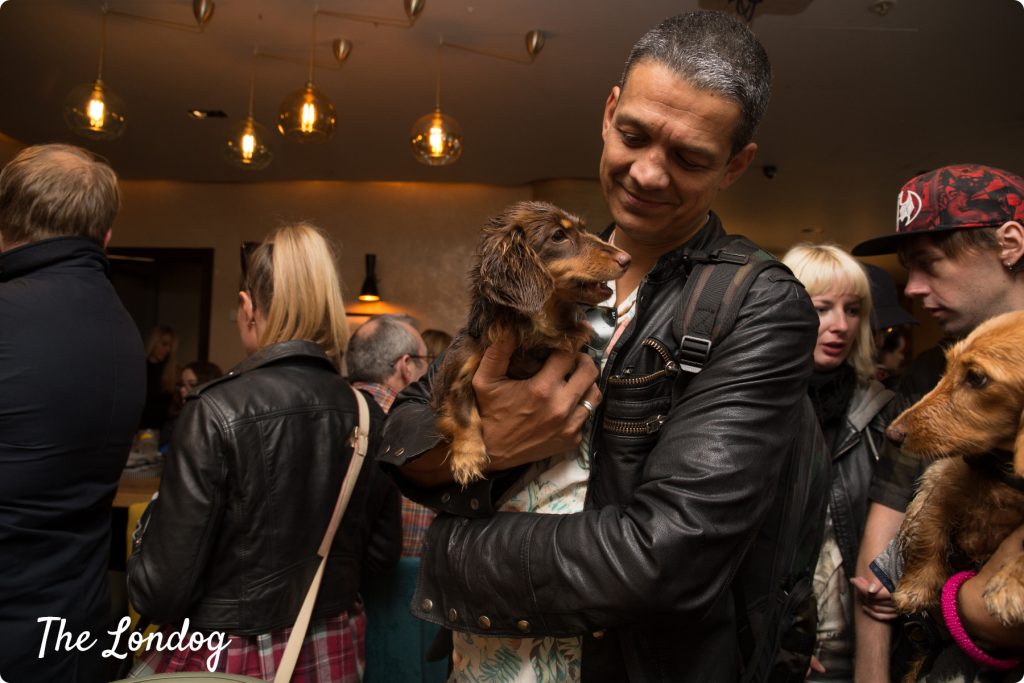 In the square there was also a sculpture from the Tusk Rhino Trail art installation (drawing attention on the threat of poaching for the survival of these creatures and which will go on auction on 9th October to raise funds for this cause). There were a couple of Dachshunds that found it really scary and keps barked at the Rhino, running around without getting close to it. 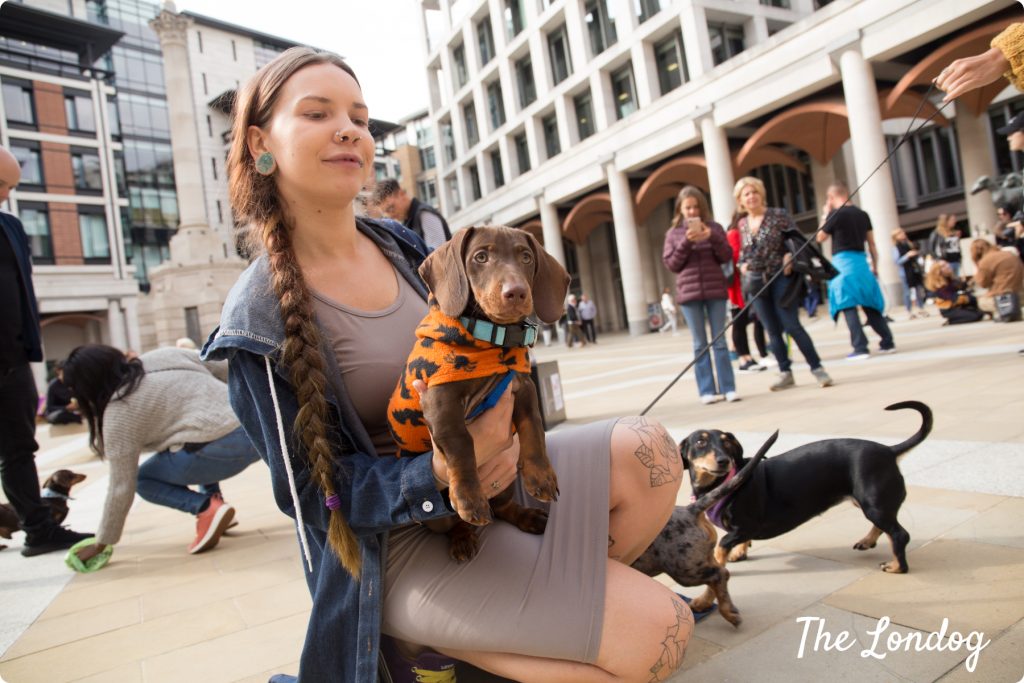 Smithfield 150 is still on today (Sunday 26th August) as we write. You can pop by to enjoy music, loola hop sessions, food stalls and much more. There is also a glorious meat barbeque in the garden of St Bartholomew’s church you shouldn’t miss. You can find the programme here.

Also, if you missed the Sausage Dog Parade, don’t despair: the Sausage Walk London will be back. “Plans are for something next Spring, [we] haven’t set a date. Due to the sacale of the walk we are having a bit of a rethink as to how to make it happen and most enjoyable for all. Plans are in motion”, say Grace, Catherine and Katherine (sign up on their website for updates on the next date directly from them).

For all upcoming London dog events check out our Dog Events Calendar. 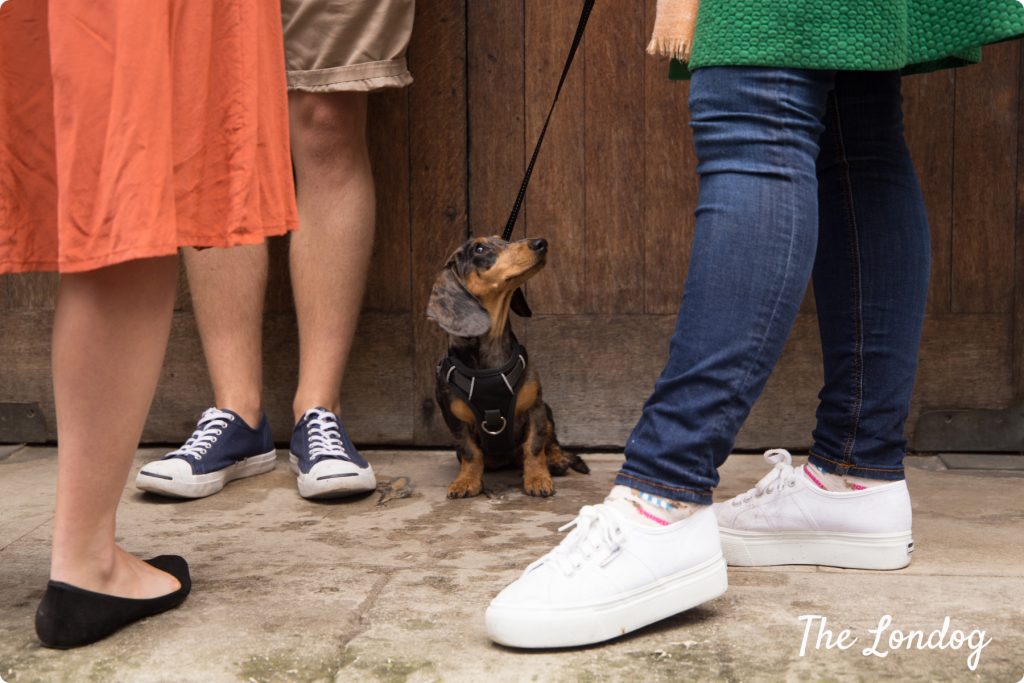