Running with your dog in London: clubs, events and more 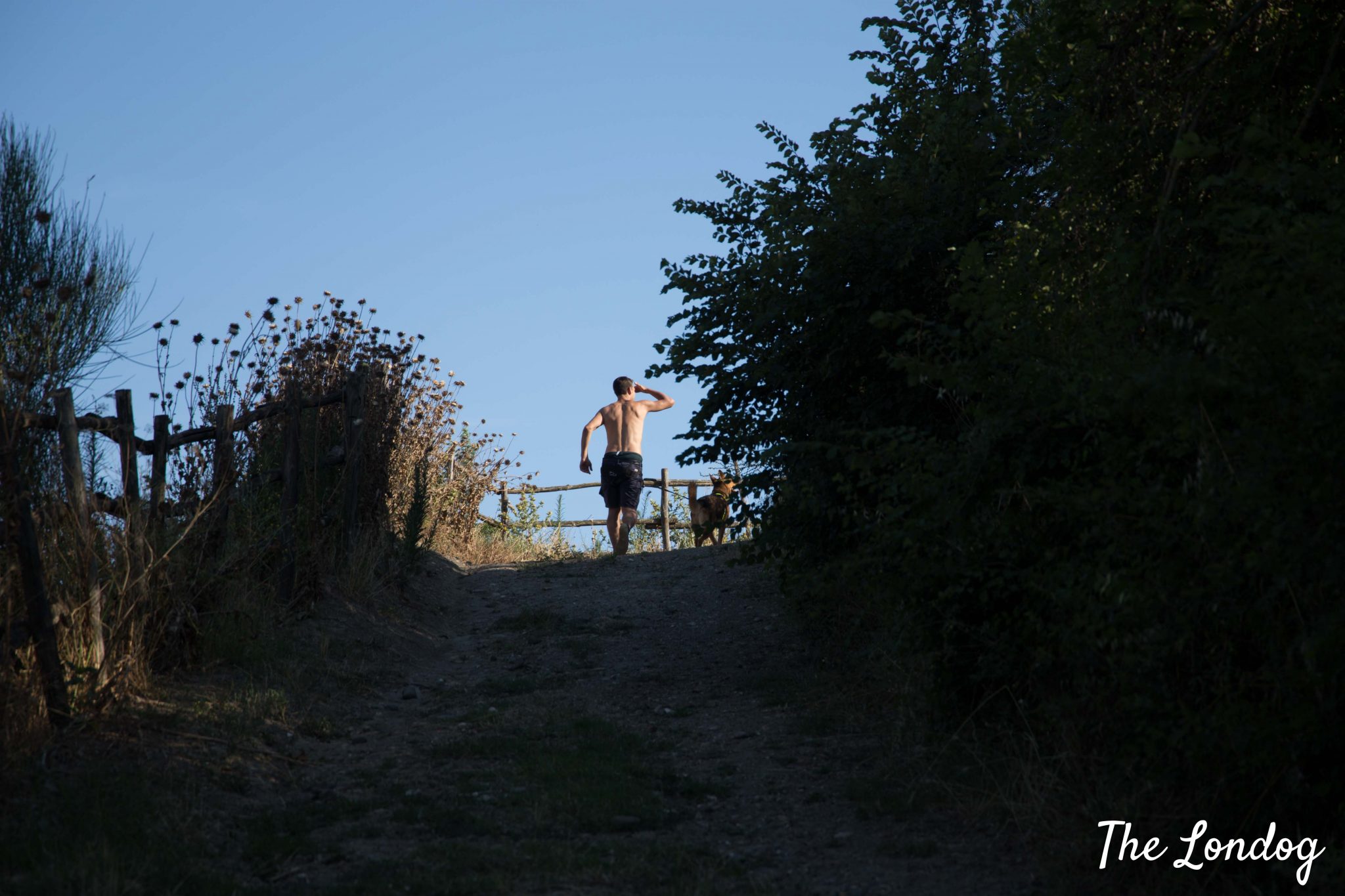 Fresh breeze in your hair, the air swirling into your nostril and filling up your chest, your mind letting go of all the thoughts, your dog preceeding you content. Running is a great way to keep active while giving your dog some good exercise. From classic jogging with your dog to canicross, there are a number of options you can explore even if your dog doesn’t do well off-leash. In this post we tell you more about running with your dog, dog-friendly clubs you can join in London and the some of the best jogging locations in London for you and your four-legged friend to explore.

Running with your dog in London 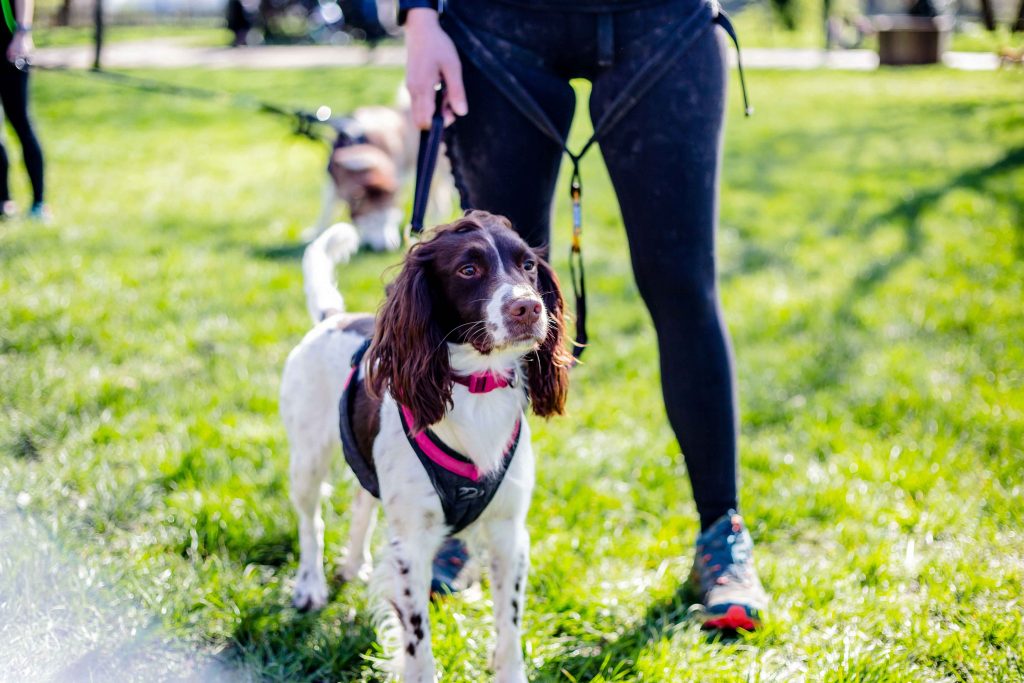 I used to be a keen jogger, before an injury ended my chances of enjoying the sport. But I still hold some great memories of that time: runs with our family dog happily trotting alongside after a day at uni, breaking the one-hour-run goal with one of my best friends when I thought I could have never reached the target and an evening run was also the activity we picked for our second date with my husband. If you are into running, you’ll cherish the feeling of burning your last energies while freeing your mind after a long day at work.

While not all dogs can safely run – for instance this may not be a suitable activity for older dogs or those who have joint/mobility problems; also, flat-nosed breeds often have breathing problems which makes running not advisable -, if you have an active and healthy dog it may be a great sport to pick up together in the form of jogging (with your dog on or off-leash) and/or canicross, a discipline where you run with your dog attached to a special harness and belt.

So if you are a keen runner, and so is your dog, this little guide may come in handy.

1. Jogging with your dog 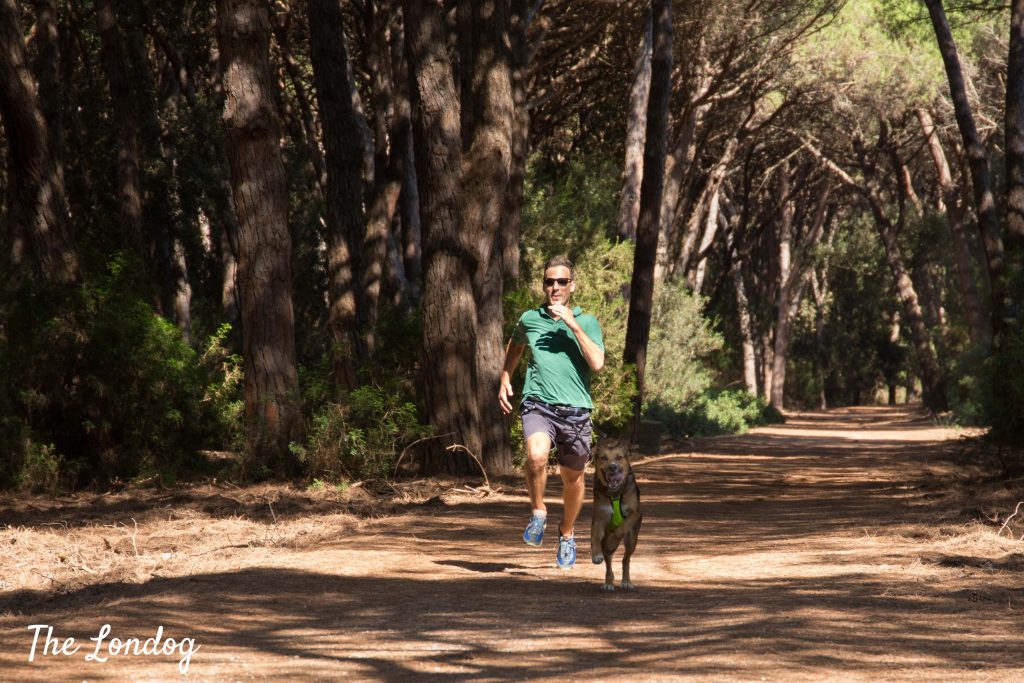 If your dog has a good recall and sticks with you while on a walk, jogging is a good chance to exercise together without strings. Most dogs seem to have a natural inclination to run discontinuosly, stopping to sniff and start running again, so provided that they have a good recall and they are trained to keep within a short distance from you when out and about, this can be a very rewarding activity for both of you.

You can do it on your own, at your own pace, early in the morning before going to work or, when days are longer, in the evenings, or use the weekends to concentrate your aerobic efforts. However, if you prefer it to be a social outing, there are a number of dog running events and clubs in London you can consider.

Keep an eye on our Dog Events Calendar for upcoming running events.

If you don’t want to wait for a dog running event to come up, there are also regular running clubs which allow you to bring your dog along. Among these, London City Runners is a free running club and allows canines. We were however advised that they most run on pavement, so it’s something to consider as it may not be the best solution for running with your dog. 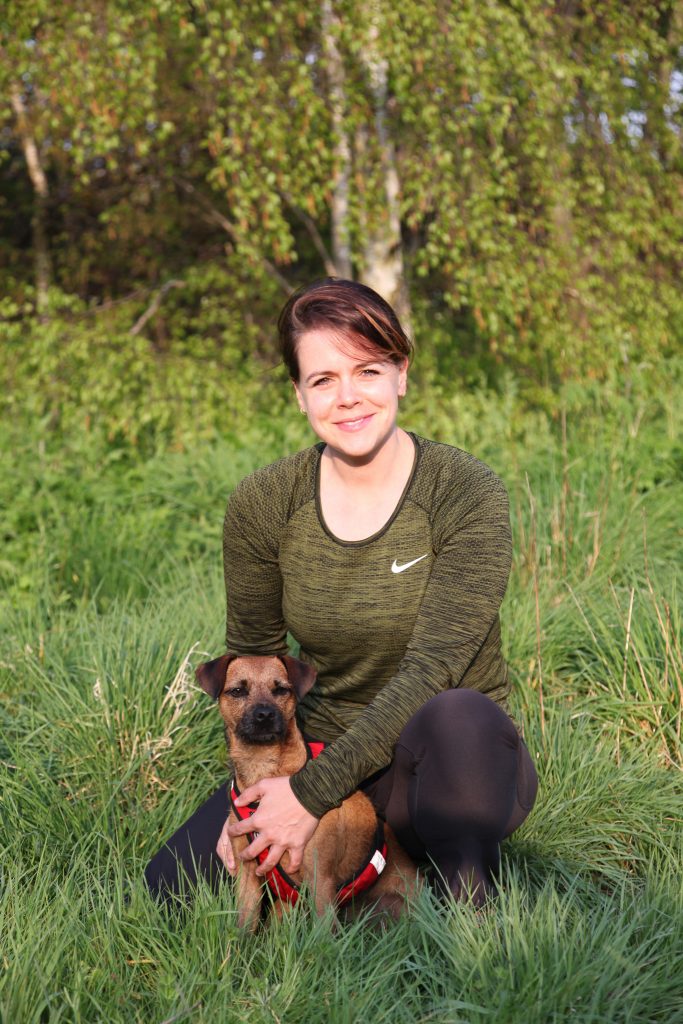 Canicross is a sport where you run with your dog attached to a bungee line with a harness to a special belt. This means that also reactive dogs, nervous dogs and dogs with a bad recall can also join. The idea is that your dog will pull you running.

This sport is now taking ground also in London, also thanks to Run the pack LDN, a newly established volunteer-led canicross group which organises canicross runs across London parks and green spaces whilst raising money for dog shelters. For his birthday, I gifted my husband a canicross starter kit – he is still needs to test it properly (so far we used it only for trekking and some sprints), but I am planning to tell you more when he gets into it.

Jo Ashbridge, Founder of Run the pack LDN and DogFit Canicross Trainer, tells us that canicross has taken her and her Border Terrier rescue dog Molly across the country, from joining organised events on the south coast in Portsmouth to navigating the Scottish lochs and that they are eager for their next adventure. “I also love connecting with other canicrossers. You meet people who share your love of dogs and who are similarly passionate about their health and wellbeing. It’s a strong and extremely friendly community,” she adds.

Jo and Molly do both canicross an off lead jogging. “She loves to be off lead so when we’re running solo through the forest she often runs free, darting between trees. It’s a bit like an enormous agility course for her. She’s in control to stop, sniff or sprint,” says Jo. “[On the other hand] she also loves to run with the pack, so canicross (canine + cross-country) is a safe and structured way to do this. Canicross is wonderful as you run in harmony with your dog… and even though she’s small she gives me a boost up those hills!” 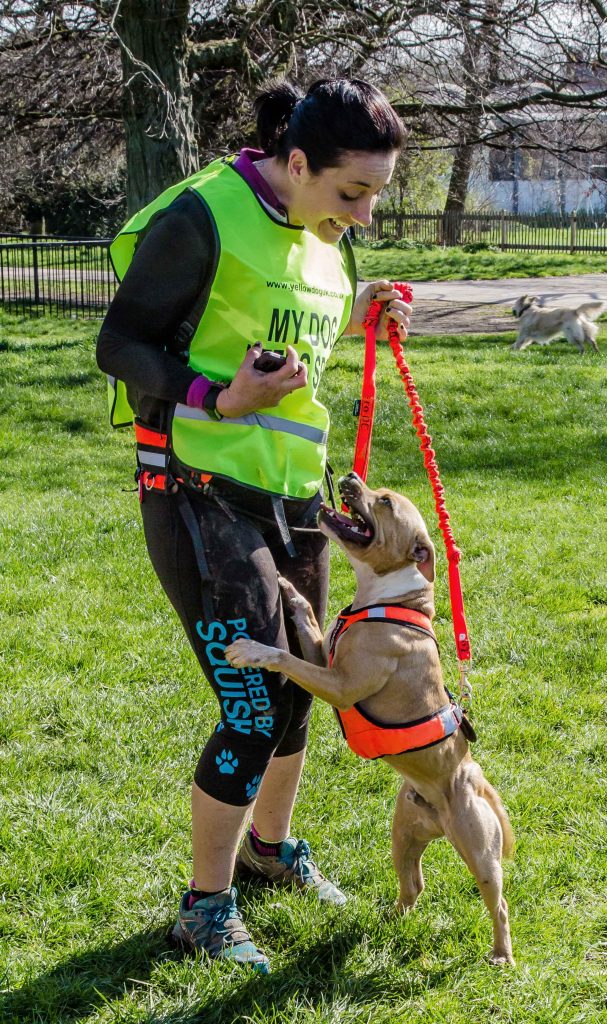 Run the pack LDN believe in canicross being inclusive, and that any dog can do it as long as it is fit, healthy and old enough give it a go. Jo gives some top tips about canicrossing:

How to get started with canicross in London

Run the Pack LDN plans to host 4 runs a year. So far, they ran at Hampstead Heath, Connaught Water in Epping Forest and Nonsuch Park. Location changes to try and cover different areas and in order to participate runners have to make a donation to Chilterns Dog Rescue Society. The next canicross run’s date and location hasn’t been announced yet, but we will include it in the Dog Events Calendar.

Jo set up Run the pack LDN to help bring together canicrossers across the city and to organise a few meetups closer to home. “We’re led entirely by volunteers and 100% of ticket sales go to dog shelters. People choose to run 5km or 10km and run in small groups led by a pack leader. This year we’re supporting Chilterns Dog Rescue Society, which is an independent shelter in Hertfordshire who matched us with Molly.” 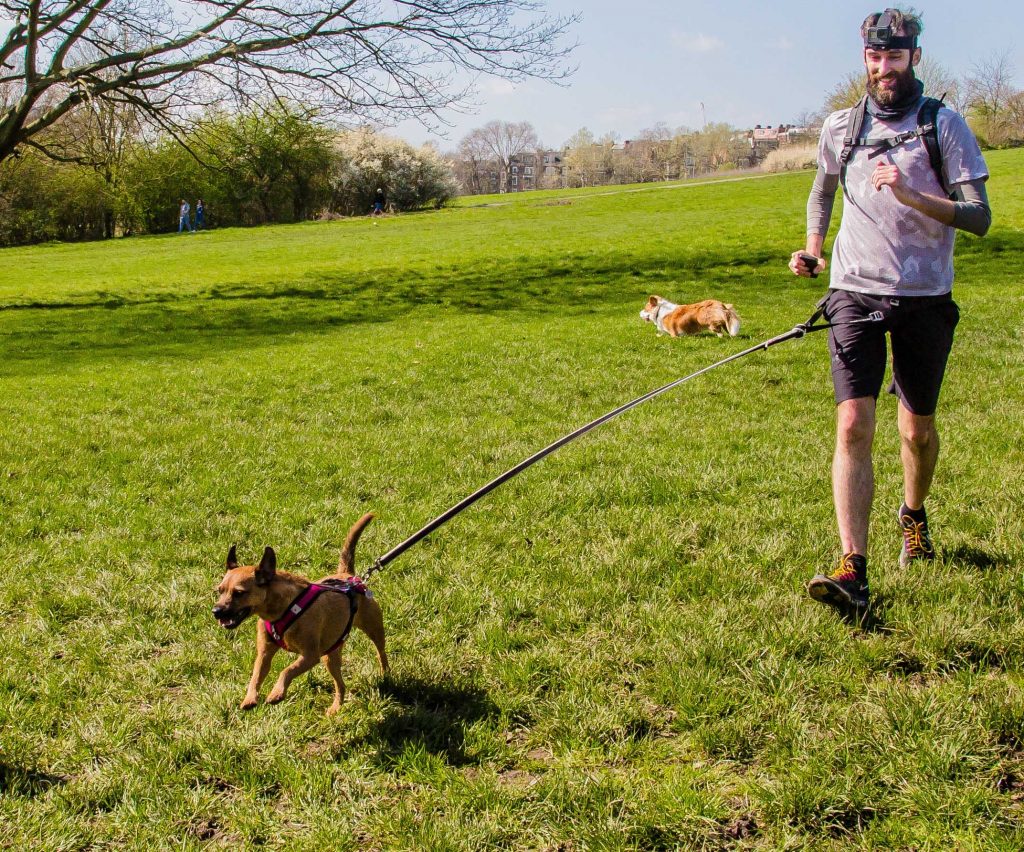 Canicross London is a Facebook group led by Catherine and her Siberian Husky Mavis. They organise casual runs predominantly in southwest London. “It’s a great community to be a part of with lots of knowledgeable canicrossers to ask questions,” comments Jo.

Where: Around Hampton, Richmond and surrounding Thames path areas.
Cost: Social runs are free
Contact: You can join the Facebook group here.

If you are keen to learn how to canicross with your dog guided by a professional, you can reach out to a DogFit instructor (you can find the closest to you with the help of this map). A few names:

Tips for running with your dog in London 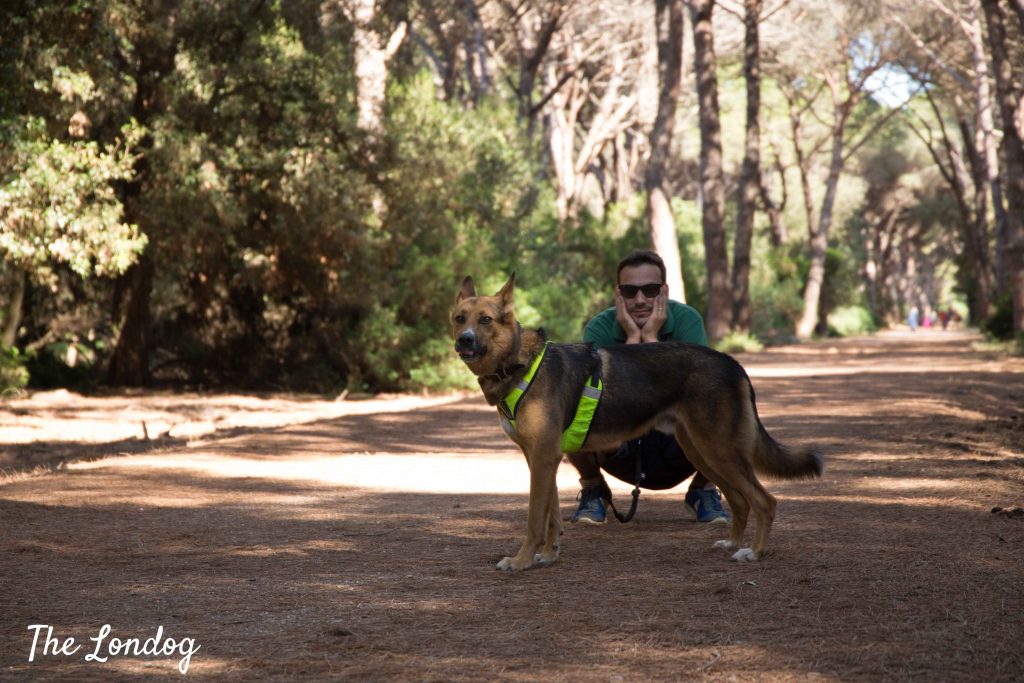 When planning your dog jog, there are a number of factors to keep in mind:

London has so many parks that it will not be difficult to find some great routes, however, it may take a bit some more exploration to identify the best one for your running needs in light of the factors above. For your back and knees natural ground is a better option, and parks are healthier for your lungs. The Royal Parks are definitely a great place where to be immersed into nature while exercising, some ideas: