Rooftop Film Club: Where Every Night is Dog-friendly Cinema Night 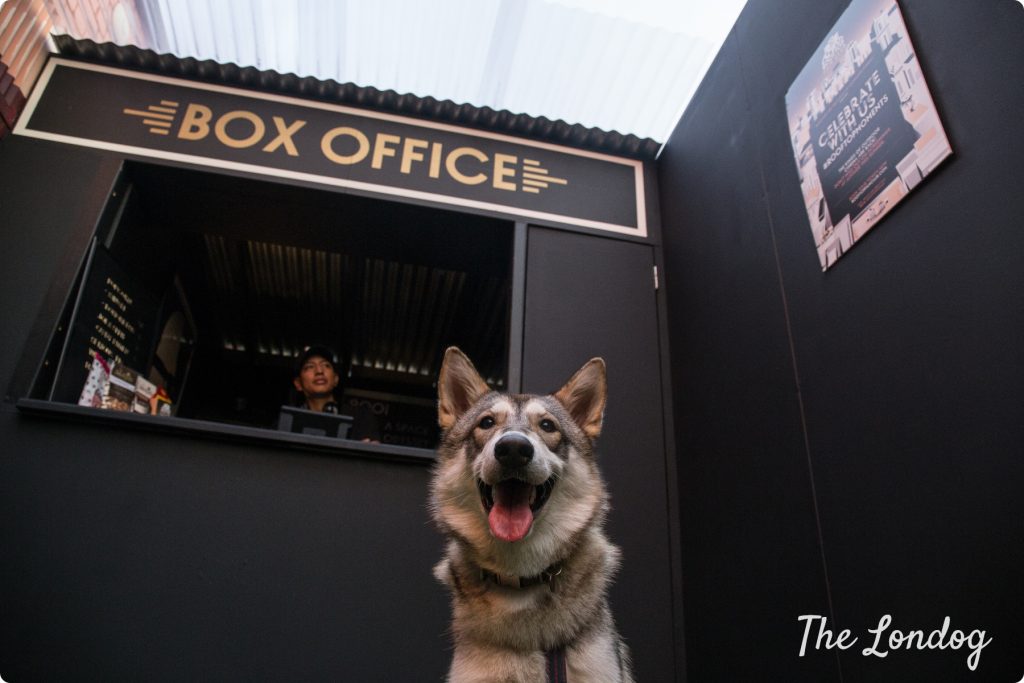 ooftop, cinema, breathtaking London skyline view, popcorn, food, drinks and dogs welcome: there is a place in London where you can combine these all and spend the best dog-friendly cinema night in town! It is the Rooftop Film Club at Bussey Building, in Peckham, South London, which is dog-friendly for all and any screening! We were invited to try it and this is all you need to know about it. [Disclosure: as often happens with press, we were offered a complimentary pass. This is an independent review and all views are our own] 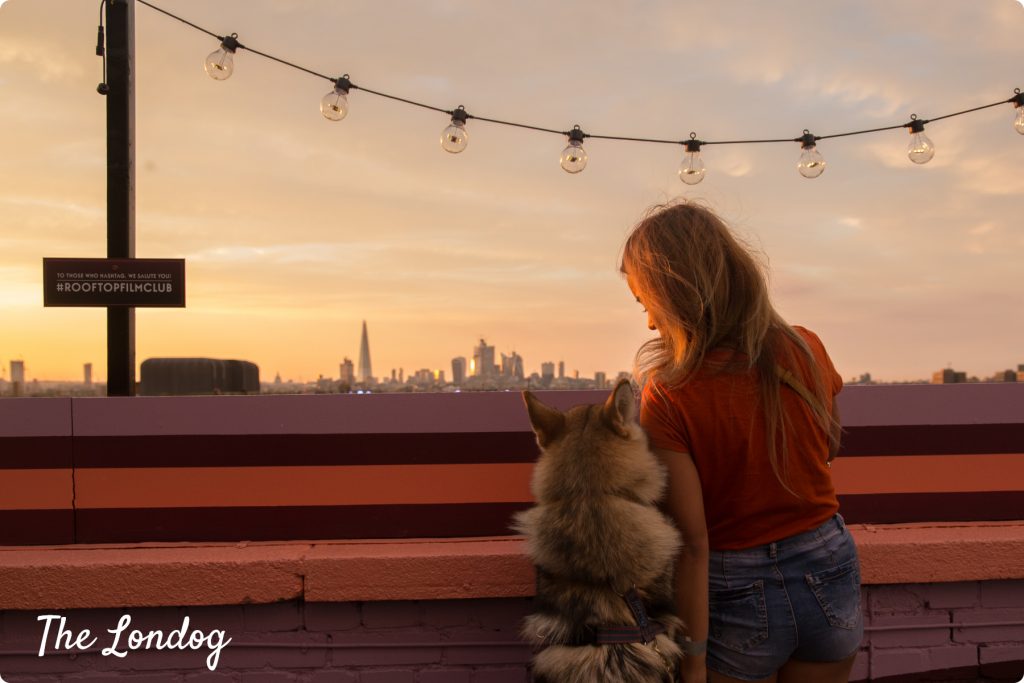 The Rooftop Film Club opened its doors in 2011, when it started as a single rooftop in London’s Shoreditch, before expanding to other venues across London, LA, San Diego, Houston and NYC offering the ultimate open-air film experience. It has resided at the iconic Peckham Rye’s Bussey Building since 2014.

Their dog-friendly policy, which today is limited to Bussey Building’s venue (Rooft East and Queen of Hoxton rooftop cinema venues unfortunately don’t), was introduced in 2016. The Rooftop Film Club’s team told us, “Dog lovers and owners have asked us if they could bring their pooches to the roof. So we decided to make our rooftop dog-friendly because let’s face it, why not? We love dogs!”

As confirmed by Rooftop Film Club’s team, many local dogs and their owners visit the Bussey Rooftop Bar each week and usually one at least stays for the cinema each week too.

3 Reasons Why It Is Great for Dogs and Humans Alike 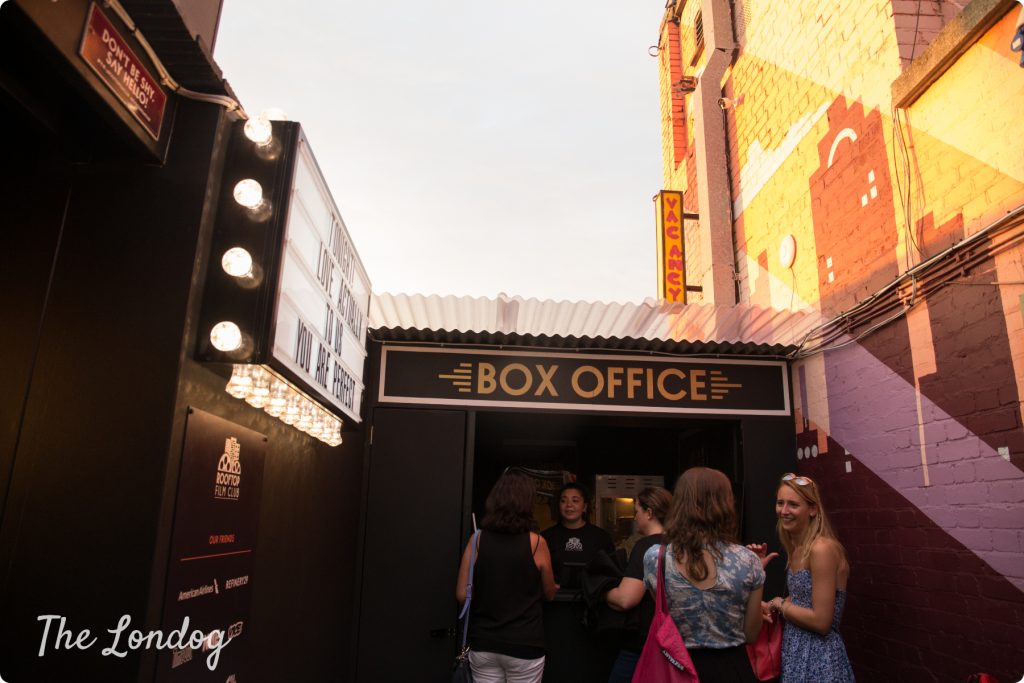 Apart from their “all and any show” dog-friendly policy, the 3 things that struck me about the Rooftop Film Club at Bussey Building even before visiting were:

From the photos on its website, the Bussey Building’s cinema venue seemed stunning. As a seasonal cinema, running from May to September, it appeared a great place to make the most out of the sunset views and enjoy the British Summer weather.

The venue has also an interesting story. The Rooftop Film Club’s team told us, “The Bussey Building is a Victorian reinforced concrete industrial structure, brick-clad with most of its decorative features on the side facing the railway tracks. It originally acted as advertising for Bussey and Co, the well-known sporting goods manufacturers. George Bussey was an eminent Victorian industrialist and entrepreneur. The factory made cricket bats from its own willow farm in Suffolk. There are magnificent views of central London from the three roofs. The factory was, when it was built, one of Peckham’s tallest buildings.” 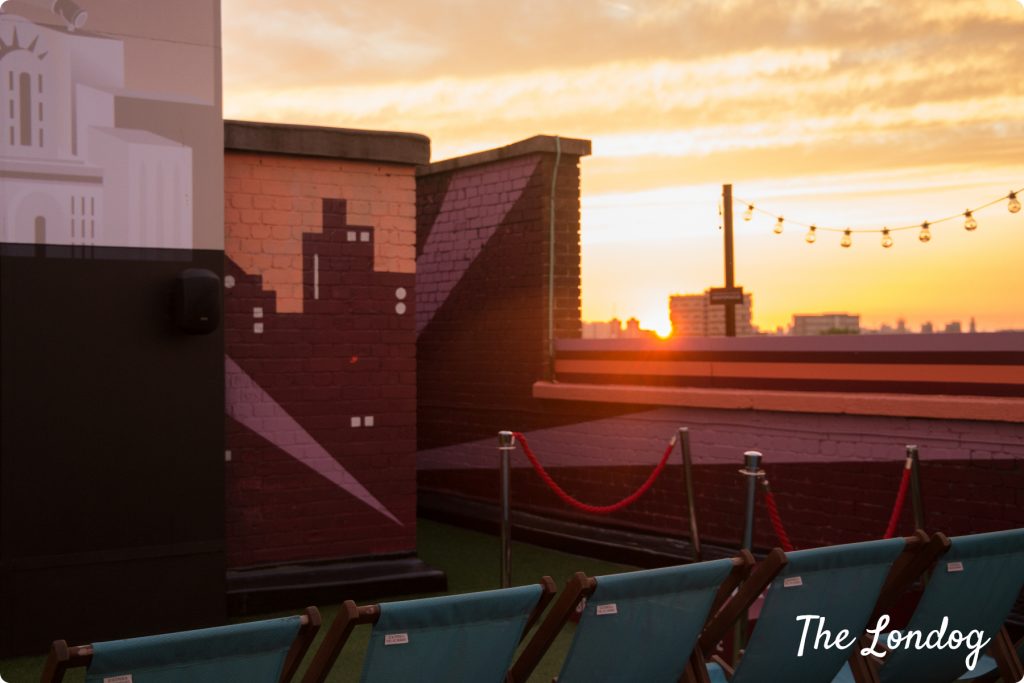 #2. Being a silent cinema – ideal for dogs

As anticipated in our Summer dog-friendly cinemas guide, the Bussey Building’s Rooftop Film Club is an outdoor silent cinema. They provide high quality wireless headphones, which they provide upon arrival.

This feature is gold for the sake of dogs’ sensitive hearing: one doesn’t need to worry about the volume at all! While it is true that most cinemas lower the film volume in occasion of dog-friendly screenings, there is no best thing than a completely quiet one. 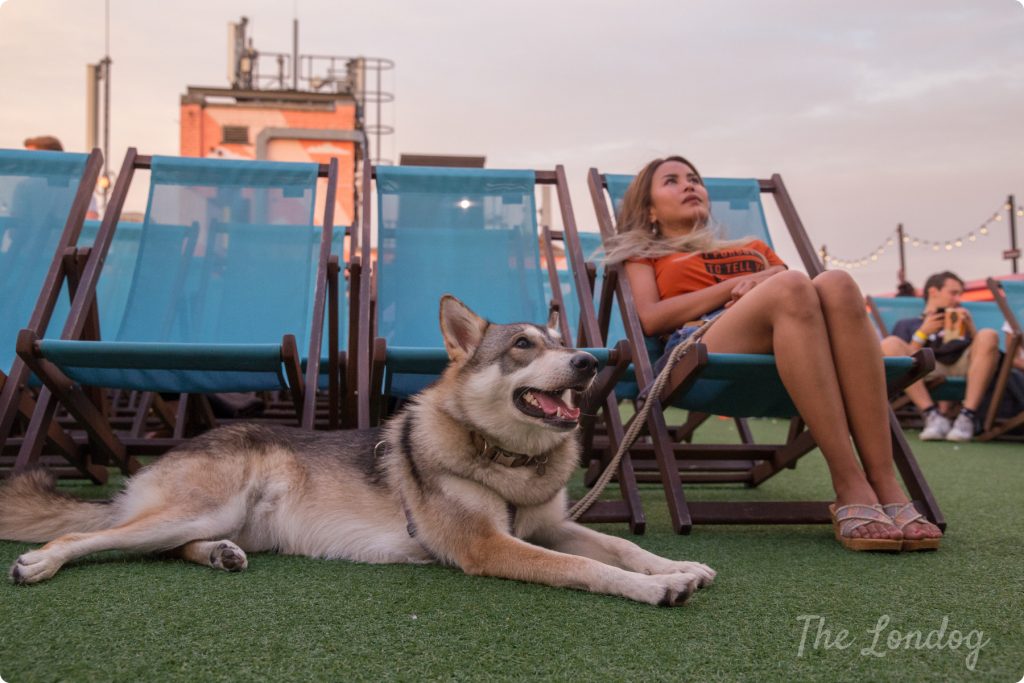 Probably the best thing from a human’s perspective is the variety of films on screen. In fact, the Rooftop Film Club shows both cult classics and the best recent releases (which include “best beloved films and spanking new releases”, says Rooftop Film Club’s team), so one can pick a film that reasonates with their film taste (you can find their programme here).

Our dog visit to the Rooftop Film Club 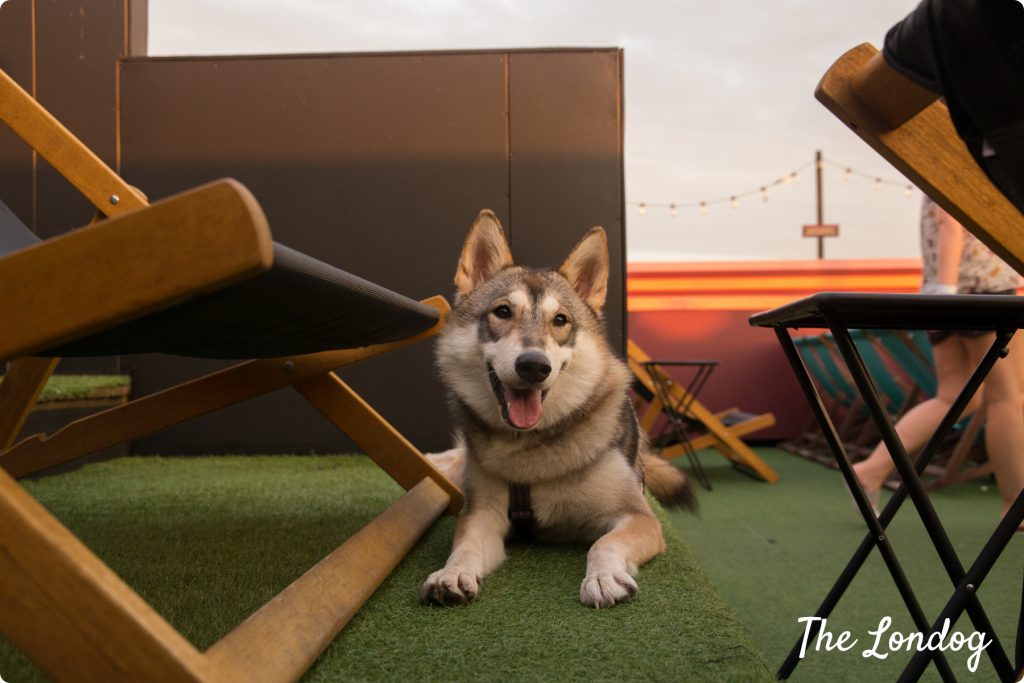 We were lucky enough to be invited over to Bussey’s Rooftop Film Club for the screening of “Love Actually“, a great Christmas classic, a couple of weeks back, in the middle of the heatwave. With a temperature of 30 degrees on the day, the Christmassy theme of the picture made quite an interesting contrast! I had invited Lyanna, the Tamaskan pup, to join with her owner: with her wolf looks, she was perfectly in theme with Winter too.

This is what how it was. 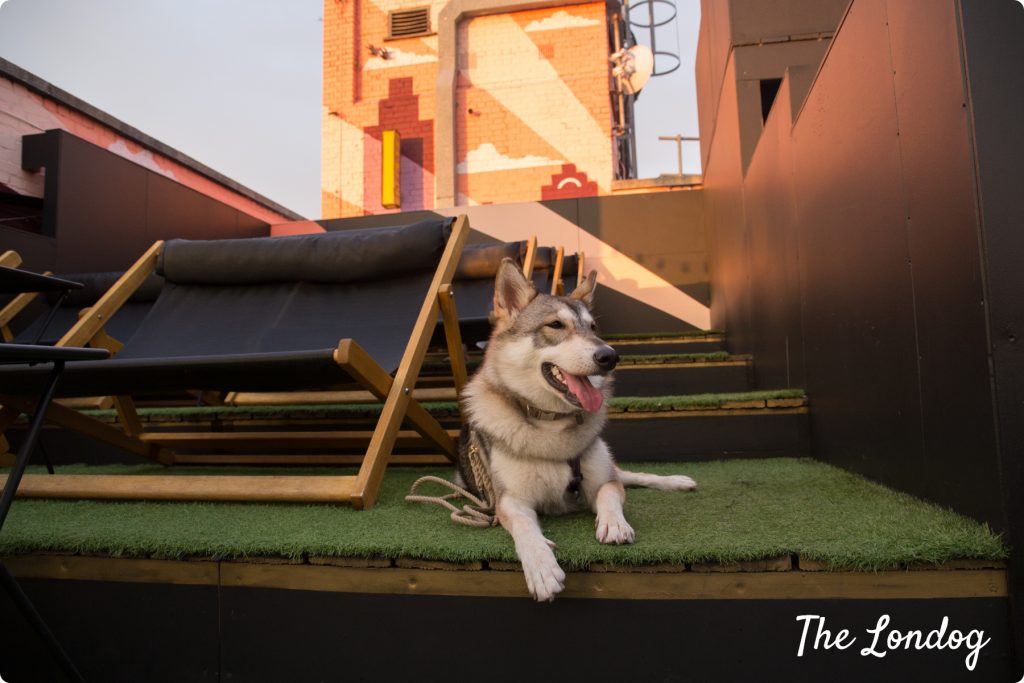 We arrived at Bussey Building ahead of the film screening commencing time, so we had time to explore the venue and being shown around by the Rooftop Film Club’s friendly team. I really loved the beautifully curated fittings, ranging from the fake grass of the rooftop cinema floor, to the little festoon lights, the lovely murals and all the other details.

Lyanna obviously was the one getting all the attention and we took her to the Best view of the House spot. Yes, they even have a little platform with the exact words to help you getting the best spectacle on the city before the film starts. We couldn’t have even luckier, since on the night of our visit London was wrapped in the orange, yellow and pink colours of the evening.

To Lyanna’s enjoyment, we found that somebody had spilled mcuh popcorn on the floor: she promptly took on the role of “Popcorn Hoover”, cleaning up any trace of them.

A bite and drinks at Bussey Rooftop Bar 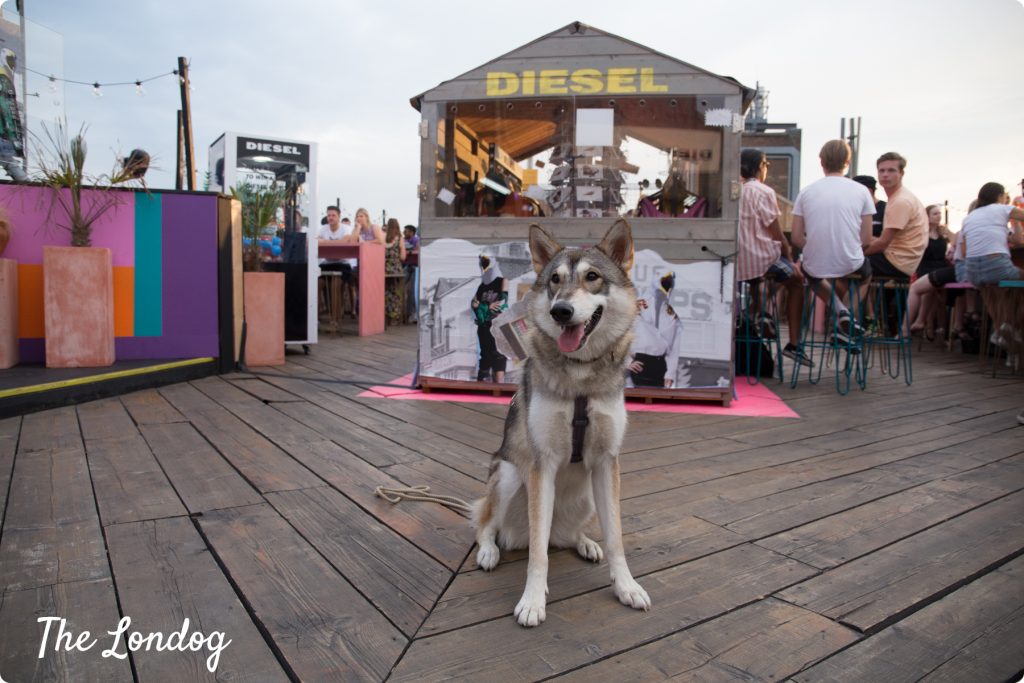 Before the film started, we also had the time to pop by the Bussey Rooftop Bar is just on the other side of the rooftop, next door, which serves drinks and food (note that the bar closes at 11pm, so if the film finishes later you won’t have time for drinks afterwards). While the bar is run separately from the cinema, it is a part of the experience that you shouldn’t miss.

Also the Bussey Rooftop Bar is very cool. On the day we visited it had a Diesel theme, and some very cool colourful walls and floors. A DJ was playing ambience music, but luckily at a low volume (so no issue for Lyanna!). We got some warm nachos and sweet potato fries as a snack for the film and we were all set for the show.

We spotted a dog bowl at the bar, and the Rooftop Film Club’s team explained that there were a few more around and they can be brought at the cineama for dogs attending the screening. 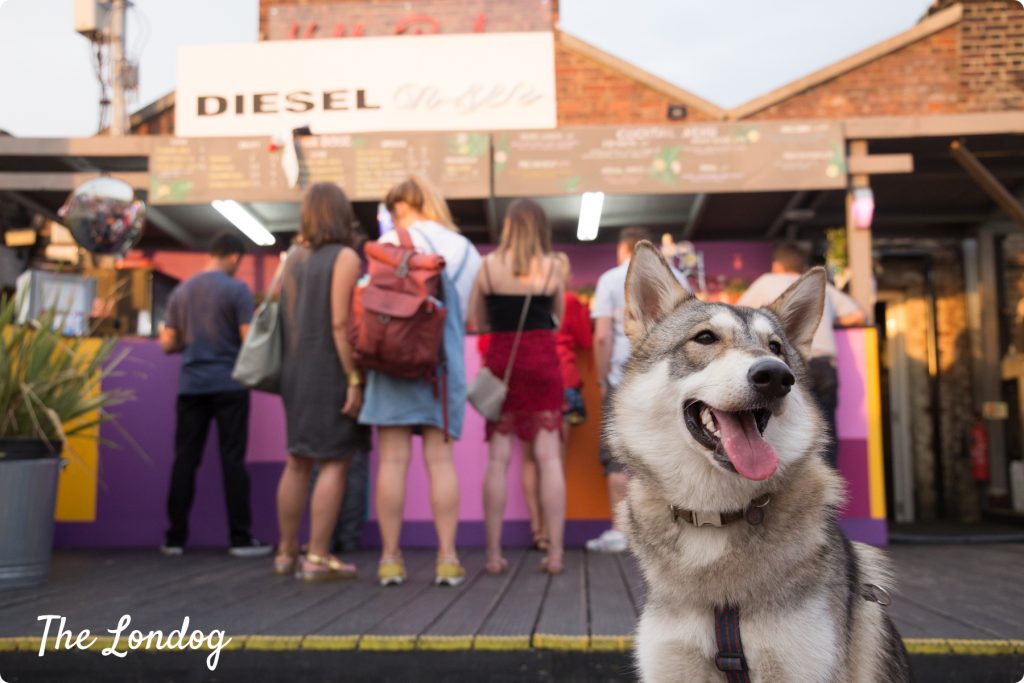 Ready for the film at the dog-friendly rooftop cinema

We had been reserved a comfy double dechchair on the right hand-side at the back, which came with a little table on the side, definitely a good spot from where to watch the film!

Chatting with the Rooptop Film Club’s team about dogs and seatings, they said, “It’s first come first served with seating especially as dogs come in different shapes and sizes, and whilst some dogs fit on a lap, others need an aisle seat, but generally people with dogs come at a good time and get their pick of chairs”. On the other hand, double deckchairs (the Rooftop Love Seats/Premium double) are reserved and they can be a good option if you have a large dog and you want a bit more space for him/her, especially the ones on top of the sloping tiers. 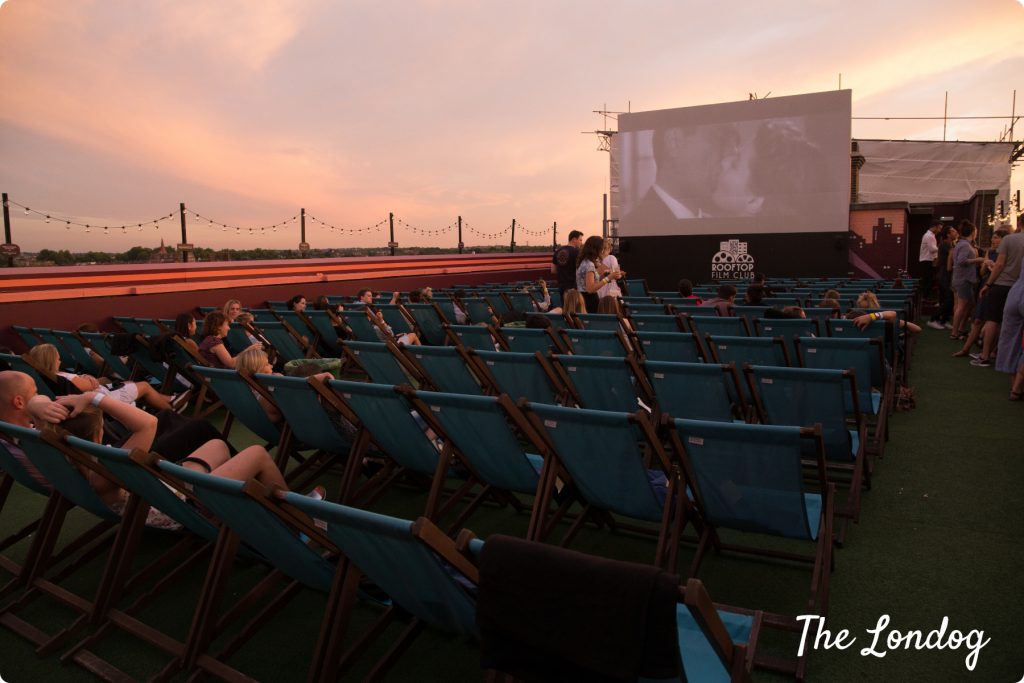 Our seats were located at the bottom. The downside was that – since the people sitting behind us had spilled their popcorn all over the place – we had to keep Lyanna in between our feet rather than on the side in order to avoid her hoovering a whole box of popcorn. This was a bit umpractical when people had to pass by.

Little by little the last sun rays were lower over the horizon and the film started. Upon arrival, we had been given headphones (which was not uncomfortable as I feared) and blankets. At first I thought that, given the warm temperatures, the latter wouldn’t have been necessary, but by the end of the film a fresh breeze had come and the blanket was in fact very handy to get wrapped into something warm. 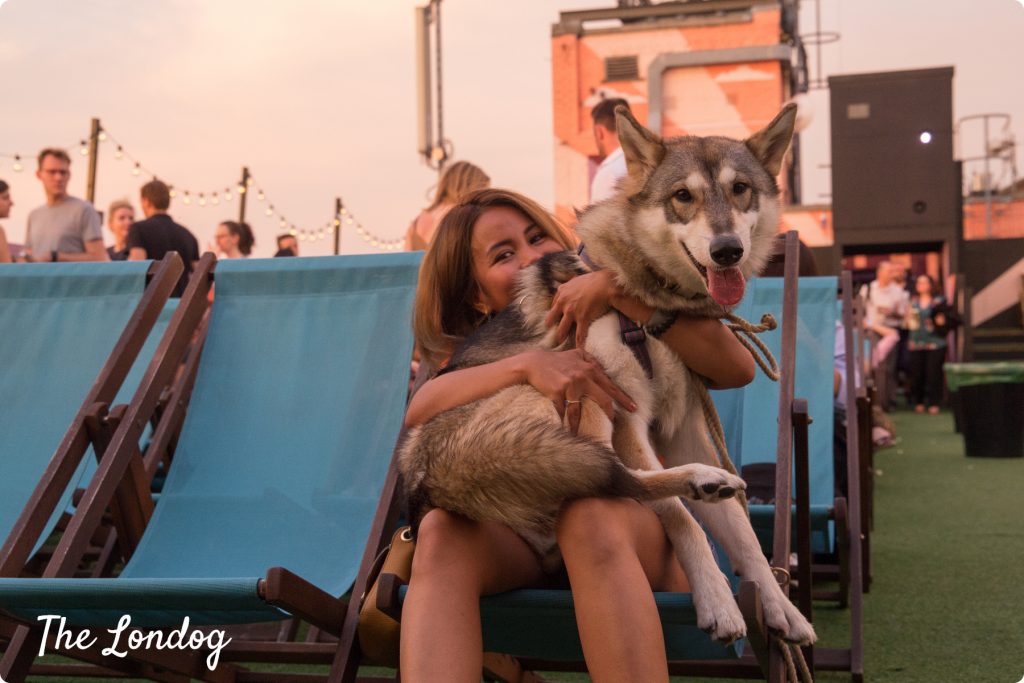 We had some good laughs during the film and at the end realised that the night view from the rooftop, under the stars and with the colourful lights of the city on the horizon, is also very special.

It was a wonderful night and I can’t wait to go back for another film, this time with Argo the dog (and, hey, if you want to join we always love to meet some other dog owners!). A few important things to keep in mind are that tickets are not refundable and get sold out on most nights, as well as that shows are rain or shine (in case of rain they provide rain ponchos).

Visiting the Rooftop Film Club at Bussey Building with your dog 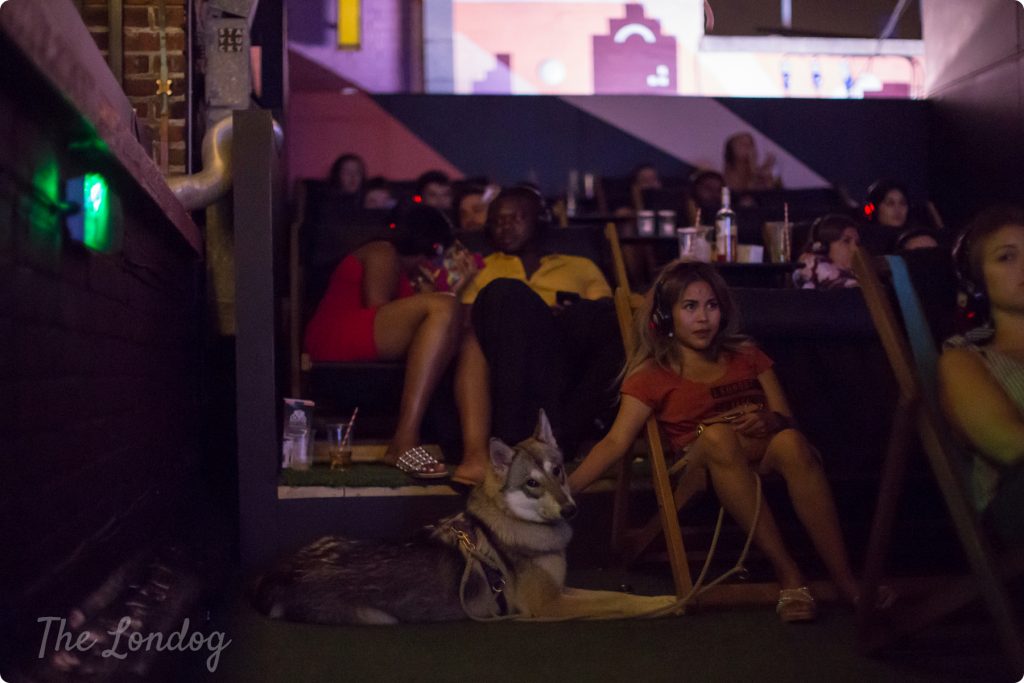 How to get there. Just minutes from Peckham Rye overground and train station. By public transport it can be reached by Overground/rail and the nearest stop is: Peckham Rye station.

Times. Screening are on 6 nights a week (from May) until September. The doors open at 5pm for drinks, while screening times vary depending on sunset hours (on their website there are all shows details). 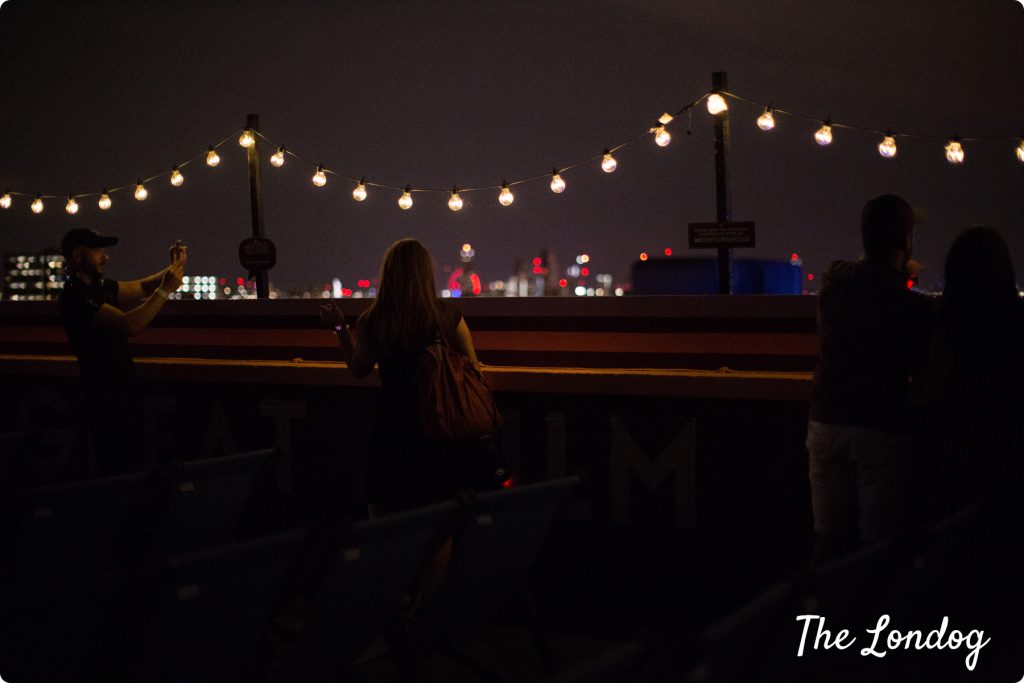 Guide to Dog-friendly cinemas in London