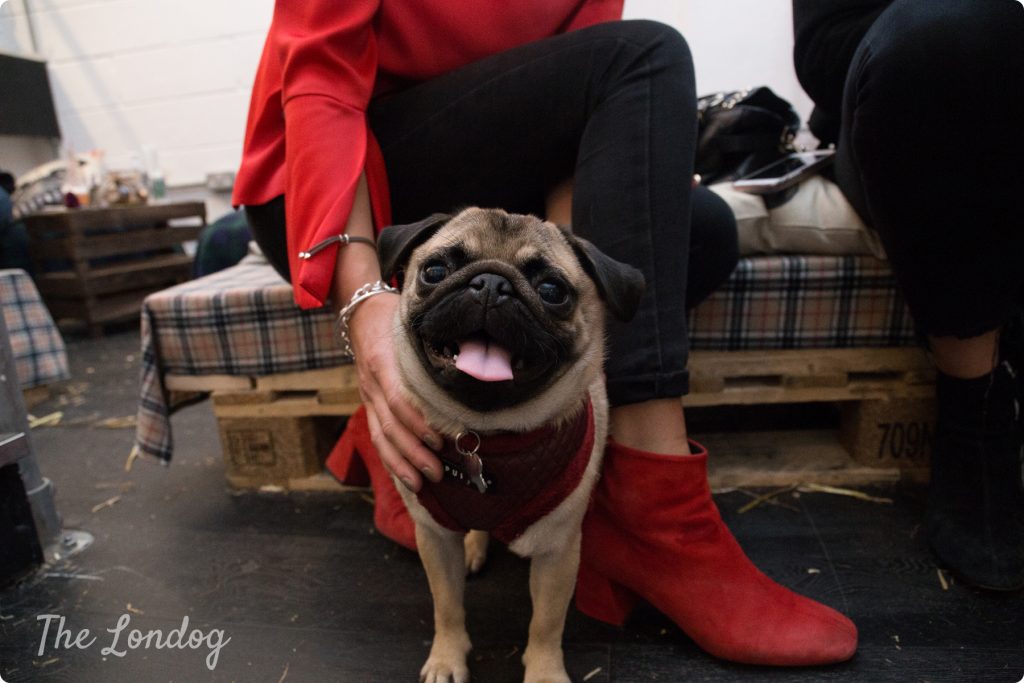 On Friday night we were invited and popped by at the Pugs & Pals pop-up dog cafe, running in Brick Lane this weekend. The event is a pop-up weekend trial for dog owners and dog lovers, with a series of fun events, all dedicated to pug, pug crosses and french bulldogs – the only breeds allowed through the door -.

Pugs & Pals: what to expect 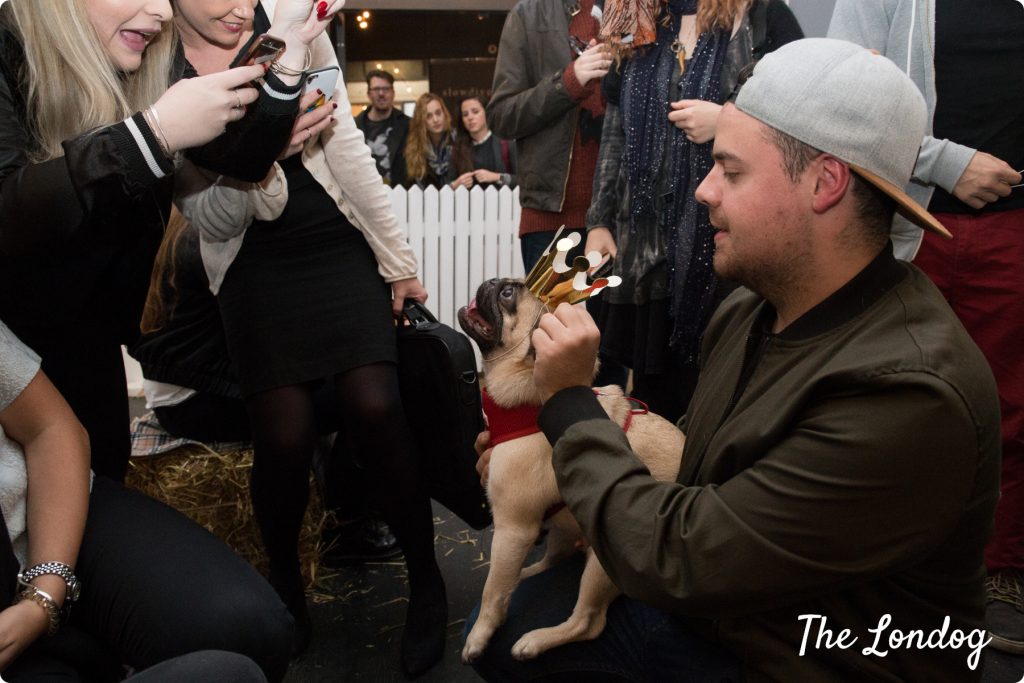 At the Pugs & Pals there is something for everyone. In fact, each hour slot is a fun event, among which Pugs and Cocktails, Pug High Tea, Puppy Hour, Pugs and Frenchies, and Pugloween. Each with their gadgets such as cardboard crowns and all.

When we visited it on Friday evening, the pugs where having a blast. Most pugs attending were persistently checking on human participants who happened to hold edible things and waiting for their share, alternating this with running up and down the stairs and around in zoomies with their furry friends. There was also some dog, like Honey, who preferred quietly sitting on the lap of a person or on the pillow next to another and lounge to be cuddled. We also had the chance to meet Instagram and film celebrity Butch Cassidy the pug, whose tag very funnily read “call my agent”. A pugtastic event, as they say! 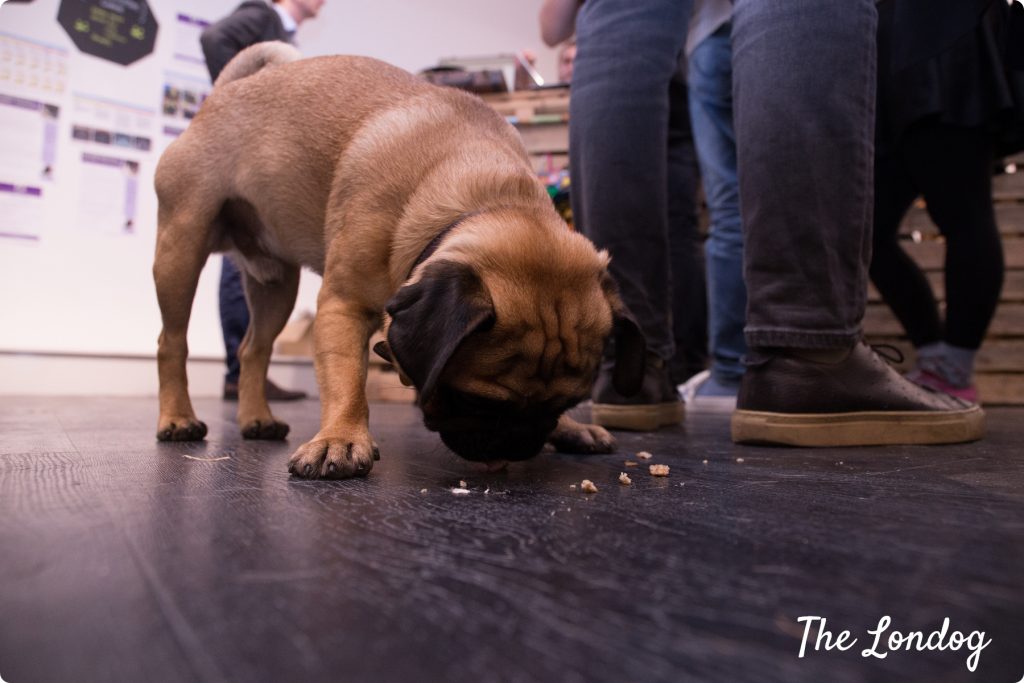 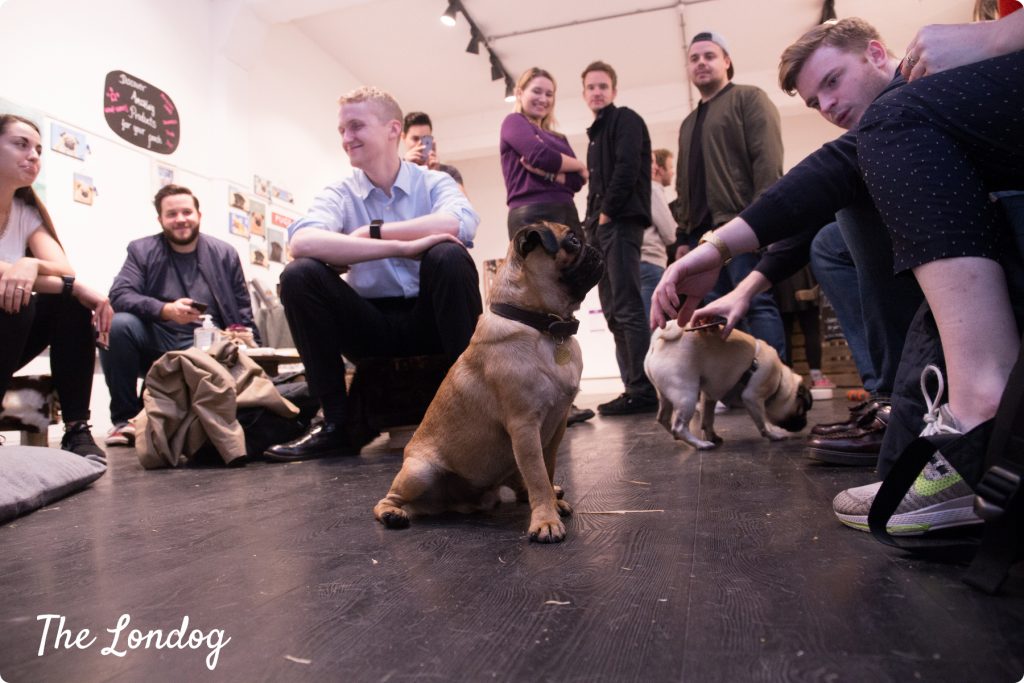 At the Pugs & Pals you can find a bakery for humans, as well as a very appreciated “barkery” for pugs where you can purchase dog treats. If you feel like spoiling your little one, there are also goodies such as collars, leads, tags, and so on, from stilish brands such as Elite Hound, Growlees, Bobblewear, and many more. 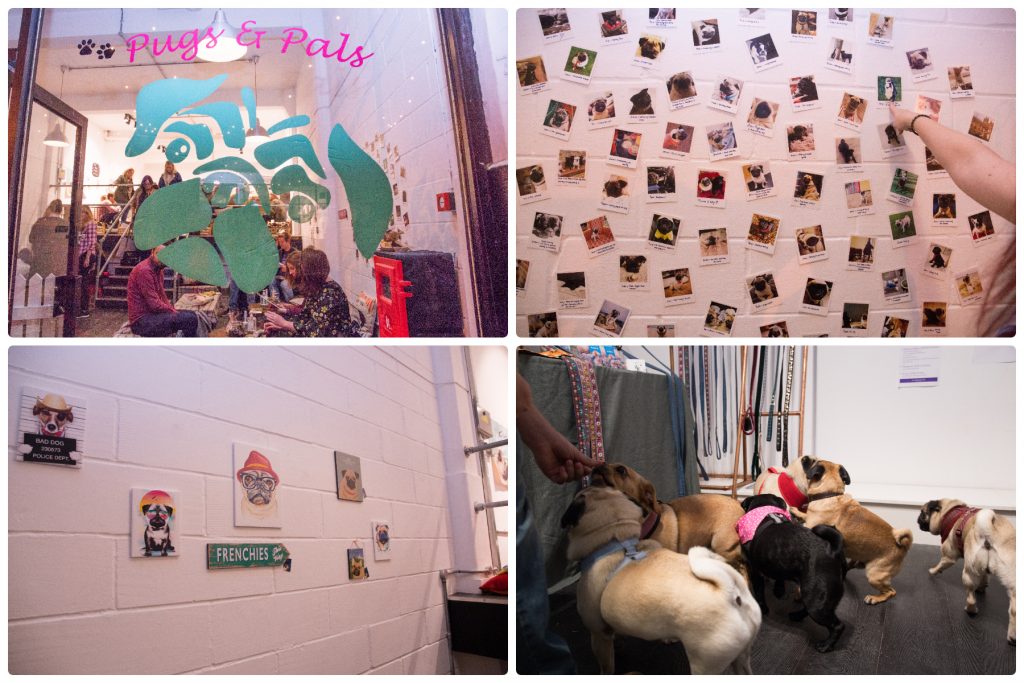 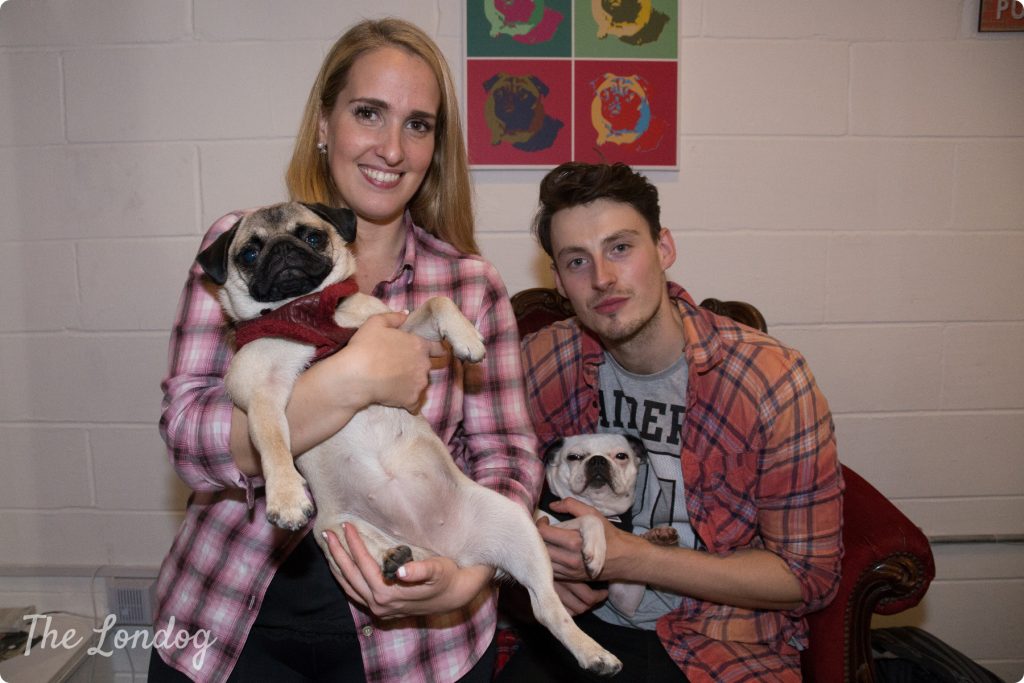 Organisers of the event are Aida Martinez and her partner, Bartosz Kolodziejczyk, together with the real host of the event, the 8-months old pug Mia and her newly adopted sister Honey, the rescue pug boston terrier cross, who joined them only one week ago.

Aida said that the idea came when they started were looking for “avenues where Mia could socialise with other dogs”: they realised that despite the popularity of cat cafes, there was no alternative in London for dogs. Hence they decided to start this concept “as a way to create a vibrant community for dog owners and lovers, in which both humans and pooches can interact”. 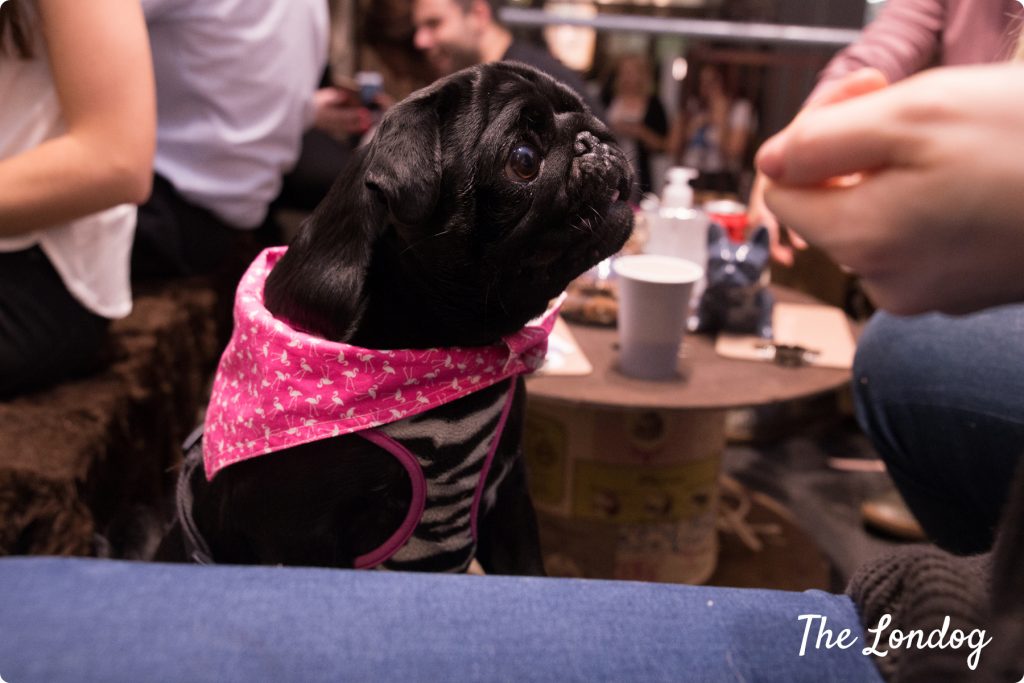 Part of the profits from the event are destined to pug and french bulldog charities. Aida said, “Pugs & Pals is actively collaborating with Pug Dog Welfare and Rescue Association, Muffin Pug Rescue and French Bulldog Saviours in various activities through the cafe, such as raising awareness of these breeds health conditions, fundraising and rehoming of some of their dogs through the cafe. Pugs & Pals will also donate part of the funds gathered by the events to these organizations to further support rescue and rehoming activities for these pug and french bulldog breeds.” 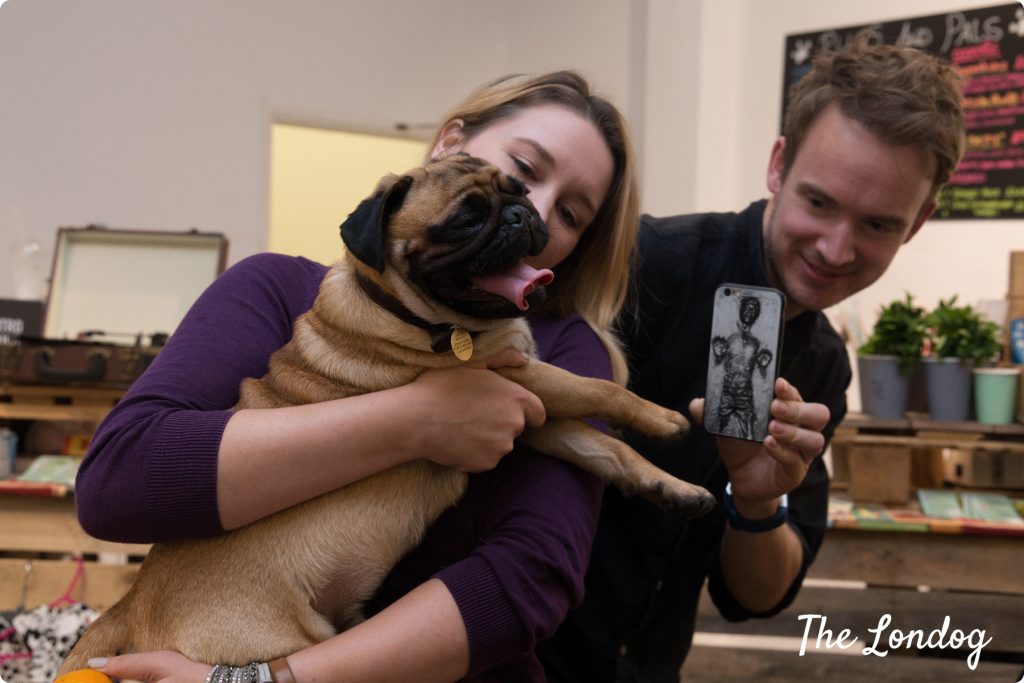 Tickets are £5 for dog owners and £10 for dog lovers (per person) and cover entry to the cafe. The places for pug lovers and pug owners ones are almost sold out, with only a few slots still available to be released during the weekend, so be quick to book your visit and join the pug fun! 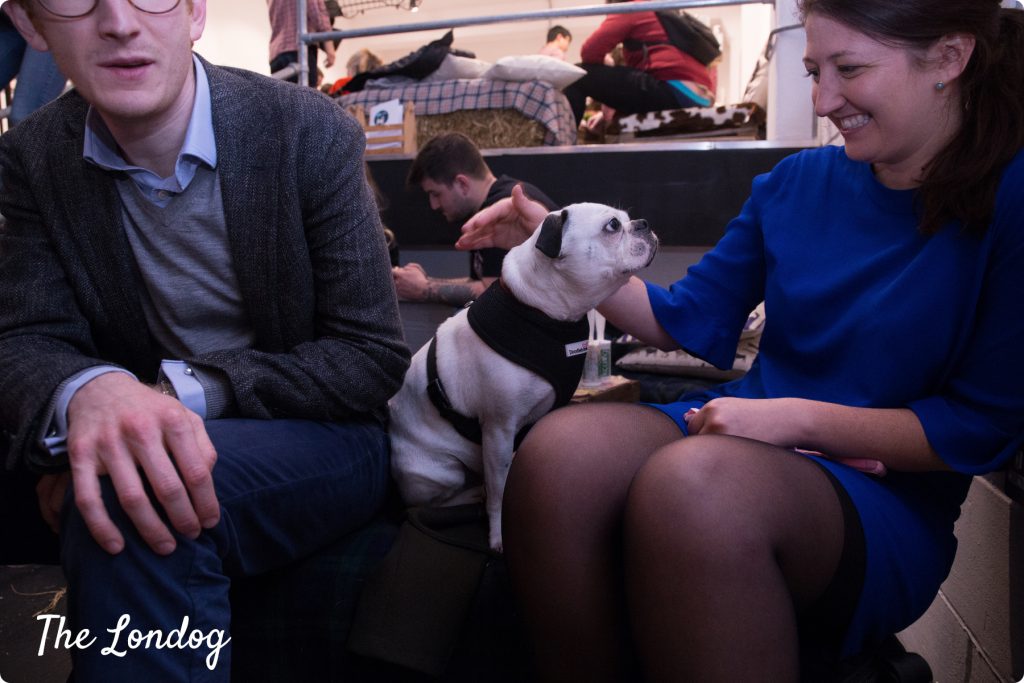