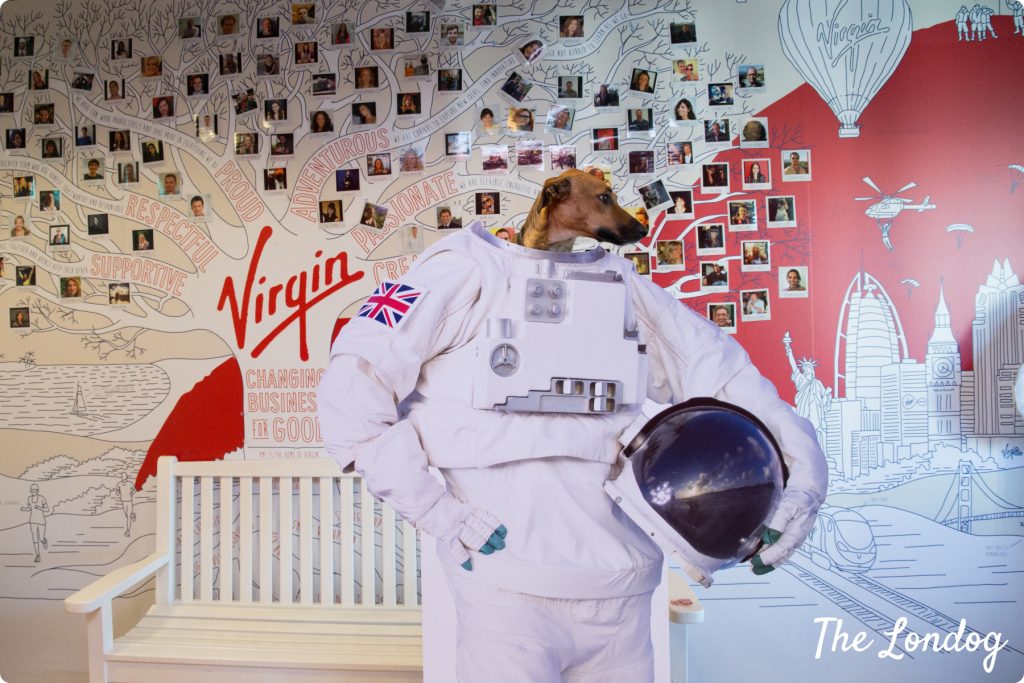 Pat the Patterdale cross chose a pioneering job at Virgin Galactic, the world’s first commercial spaceline. She was introduced as the office Space Dog, and although she doesn’t plan to go to space, her human, Rose, said that people still think she is. 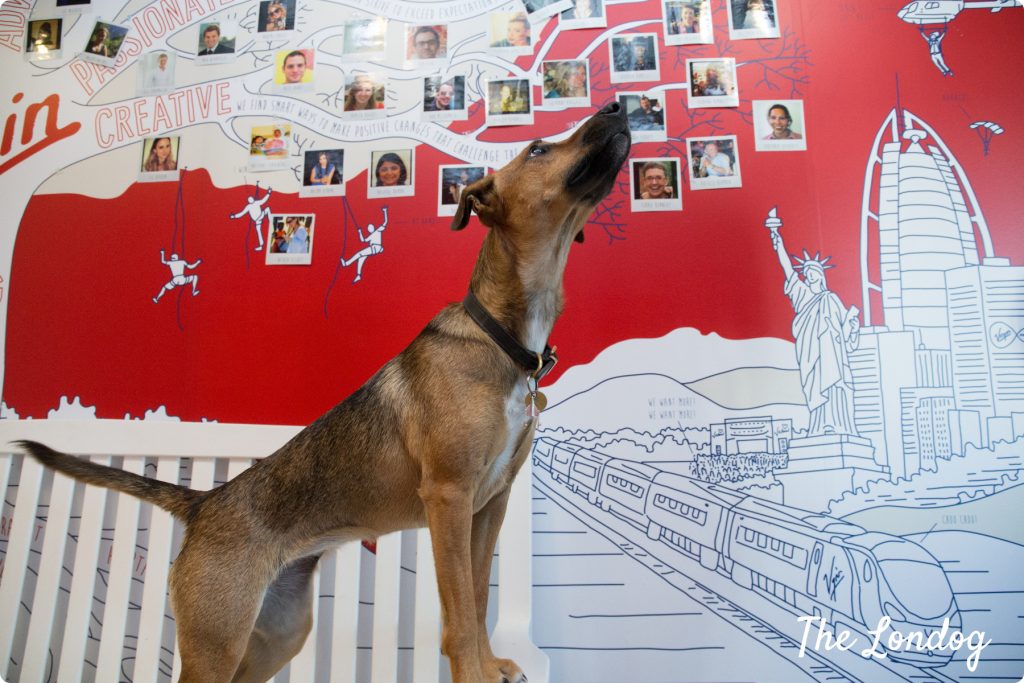 Our meeting and photoshoot took place at Virgin’s HQ in Paddington. Pat very appropriately wore a little cute spaceship on her collar. I also found it amusing how much she looks like an adorable miniature version of Argo the londog.

Rose and her husband adopted Pat after several years of discussions about getting a dog. They decided for a Patterdale because they wanted a dog small enough to live in London but still energetic to be taken for runs and accompany them on other adventures. Pat’s human Dad is the Ocean Explorer Olly Hicks! “Patterdales are tough as nails, can run for miles and are nice and little” said Rose. Not long after the decision was made, a close friend from Northumberland had a litter and three months later Pat arrived! 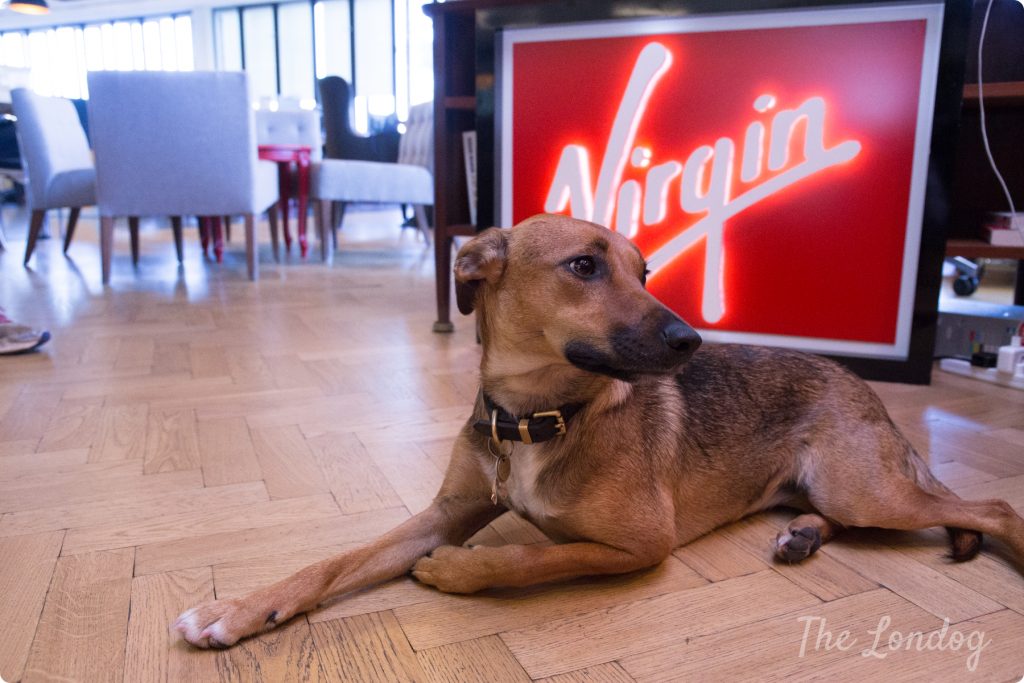 Despite expectations, Pat kept growing bigger and bigger and, on a trip back to the farm were she was born, Rose and her husband had their suspicions, she was definitely not a purebreed! In fact, there they met a Collie who had very similar brown markings to Pat… “dogs can have split litters and we concluded that her mum maybe had a bit of fun with one of the collies, as well as her very fancy pedigree husband”, said Rose. “Of course, this caused much hilarity. Our compact London dog was destined to be three times the size we had predicted. Out with the small beds, short collars and the pretty bicycle basket bought to cycle her around town in… Not only had her very presence changed our lives completely, but her ‘unique’ breeding has once again, flipped our plans on their heads.”

With this new information, Rose concluded that Pat’s independence, loyalty, high intelligence, and squirrel hunter extraordinaire talent must have come from her Patterdale ascendance, while her Collie half “makes her occasionally very shy and timid, a destructor (only of really precious things, not her toys!) and she loves a good bark! Both breeds make her totally unable to ever be worn out!” 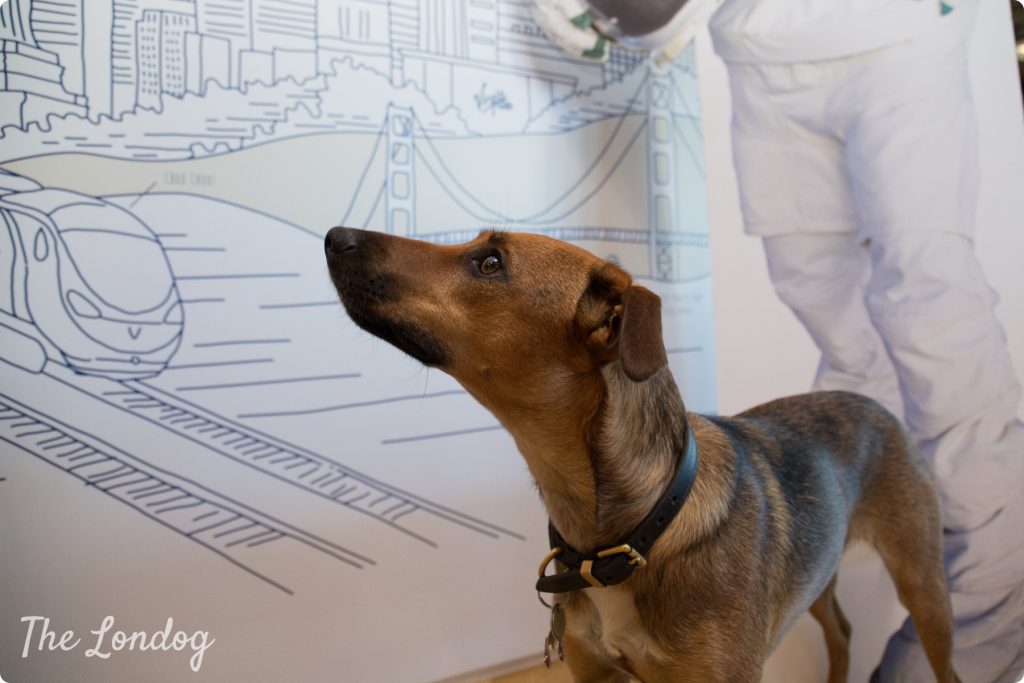 Pat is also known for…

Loving:
“Walks – all day long, she never tires! Being included in everything. Tummy scratches, sleeping anywhere other than her own bed – usually our bed. Staring hopefully up into the branches of trees hoping that a squirrel is going to come down and let her chase it. Rolling in the most disgusting thing she can find.”

Hating:
“Being wormed or being given any kind of medicine – she’ll hide under the bed for hours, the rain (who said Patterdales were as hard as nails?!), having a bath (which is needed a lot as she loves to roll!). Scary school children on scooters, some strangers, anyone dressed as Batman.”

Funniest habit:
“When she is in the boot of the car and we leave her, she sneaks stealthily to sit on the driver’s seat, she curls up so small hoping that we won’t see her. When we sneak back and she is discovered she is very embarrassed! Trying to steal ice cubes from the freezer when you open it.”

Most annoying habit:
“Rolling in anything horrendous that she can find, hiding under the bed when it’s raining and we’re going to take her out.” 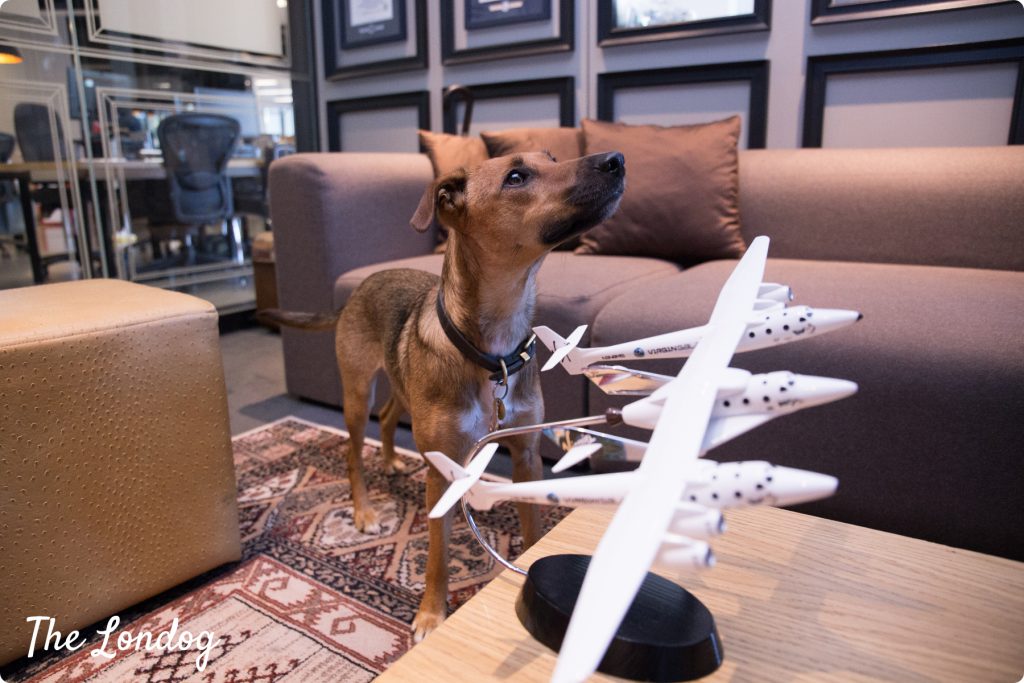 Pat has been going to Virgin Galactic offices for almost a year now and ‘works’ around one day a week. She is sometimes joined by Rusty, who is another Virgin Galactic dog. “There are also a few other dogs that come into the Virgin offices, we based in the Virgin HQ so share with other companies in the group” added Rose. “While it’s not encouraged to bring dogs in all the time we are allowed to bring them in occasionally, this is something that all the dog owners in the building are hugely grateful for – the dogs like it too, especially when we meet up for ‘Battleship Barkers’ lunchtime doggy walks”.

Dogs and space are not a new combination. Indeed, although the most famous furry being from space may be Star Wars’ character Chewbacca (who, according to unconfirmed sources, was inspired to film director Lucas’ Alaskan malamute Indiana), a dog is known for having pioneered space travelling. “In a way, having an office dog at Virgin Galactic acts as a small reminder of the legendary Soviet Space Dogs who pawed their way in the early days of space travel”, noted Rose. “During the 1950’s and 60s the USSR used dogs for sub-orbital and orbital spaceflights to discover if human spaceflight was possible. The living being in space was Laika, the dog. She made the ultimate sacrifice and died on her mission. Because of her and the other brave doggies who took to the skies, the human race discovered valuable intel that helped eventually launch people into space. While Pat doesn’t have any plans to go to space, she’s a part of the species who travelled into space first. That is pretty cool and all canines should be proud!” 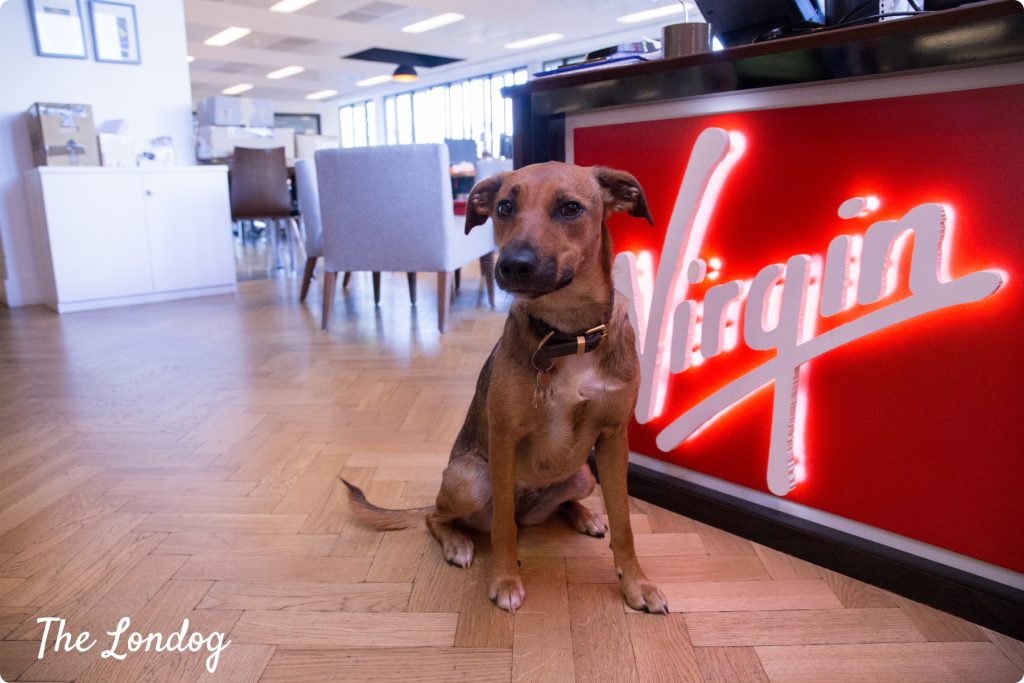 Rose is a very sporty person and gives Pat plenty of exercise before going to the office, during lunch breaks and after work. In a nutshell, Pat’s typical working day is a LOT of fun!

Starting in the morning, Pat finds her way to the office. Rose explained that she soon learnt the tricks of commuting, including which stop to get off at, “She’ll lie down peacefully on the bus floor but when the announcement is made that we are at ‘Hyde Park Corner’ then she is up and waiting eagerly by the door!”. On their way to the office they do several pit stops, firstly at Hyde Park for squirrels chasing and the coffee: “She likes destroying paper coffee cups so watches you finish your morning brew before giving you the eyes to let her help with the recycling…”

Once at the office, Pat will have a good nap for the rest of the morning. “Pat kips in her bed under my desk all morning – it’s exhausting stuff all this commuting! She occasionally decides to chew some kind of space related swag… and is soon stopped!” said Rose. In general, Pat has a thing for conscious recycling: she finds most bins and inspects their contents, sometimes all over the office floor. 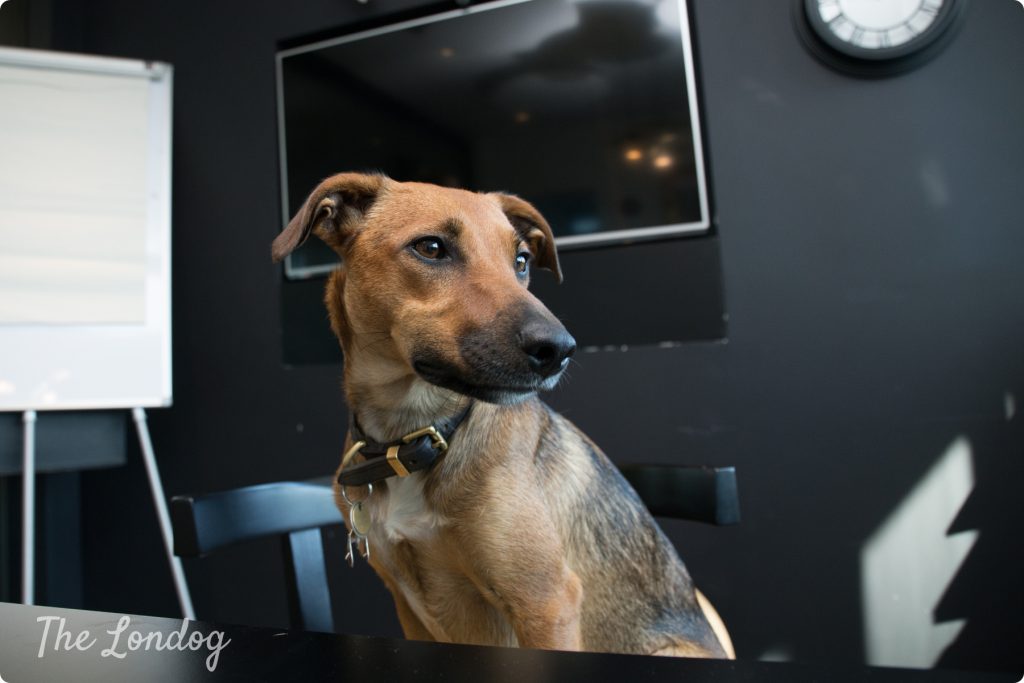 “Lunch time is run time! Our office is on the edge of Regents Canal so we either run for about 5 miles up and down – chasing the odd goose that is foolish enough to sit on the edge. Or, we head to Hyde Park again. When not in the parks, she’s on a harness and runs along in front of the group, she always has to be at the front!” added Rose.

The working day continues in the afternoon. “After all the excitement of lunch time she gets a bit restless – working with the USA means that if I need to do calls, I’ll find a meeting room, take her in with me and get on with them in there. After inspecting the contents of the bins, she settles and sleeps. If asked, she offers her opinion on Commercial Spacetravel which is always taken into consideration” conceded Rose.

“At the end of the day, when everyone leaves, Pat gets very impatient and paws my leg until I give in and go home – she knows home time means park time! When she was a puppy, she used to pee just outside the lift to indicate that it was time to go, that had to stop quickly!”, said Rose. 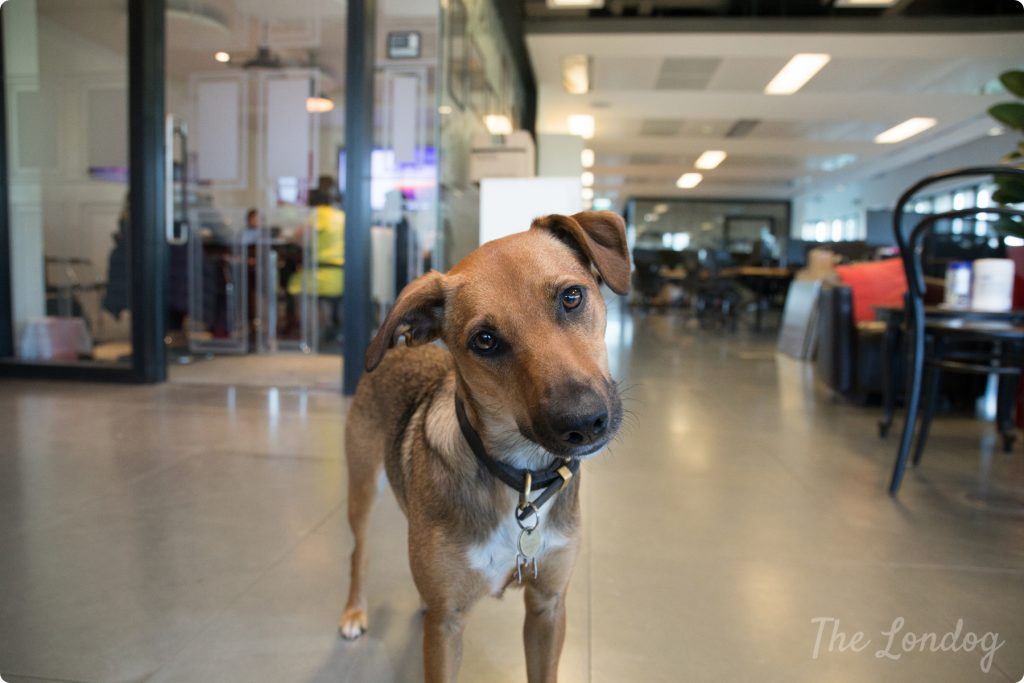 Pat has a very positive impact at the office, including nudging everyone to be more active. “Having her in the office encourages us to get out and go for a run, there are a lot of keen runners in the Virgin offices and having Pat is a good excuse for us to take an hour out and get outside”. In addition, Rose recounted that Pat usually provides good entertainment by contorting herself into all sorts of peculiar positions in the middle of the meeting room floor. Finally, she becomes a good excuse for to people come over and say hello, as well as occasionally take her for walks.

“As her owner, I am forever grateful that she can come into the office! My husband works at home so she is with him when she’s not with me, however when he has meetings or on an expedition she comes in. We simply wouldn’t have got a dog if this wasn’t the case”, concluded Rose.

Stay tuned to find out about Wednesday’s office dog.