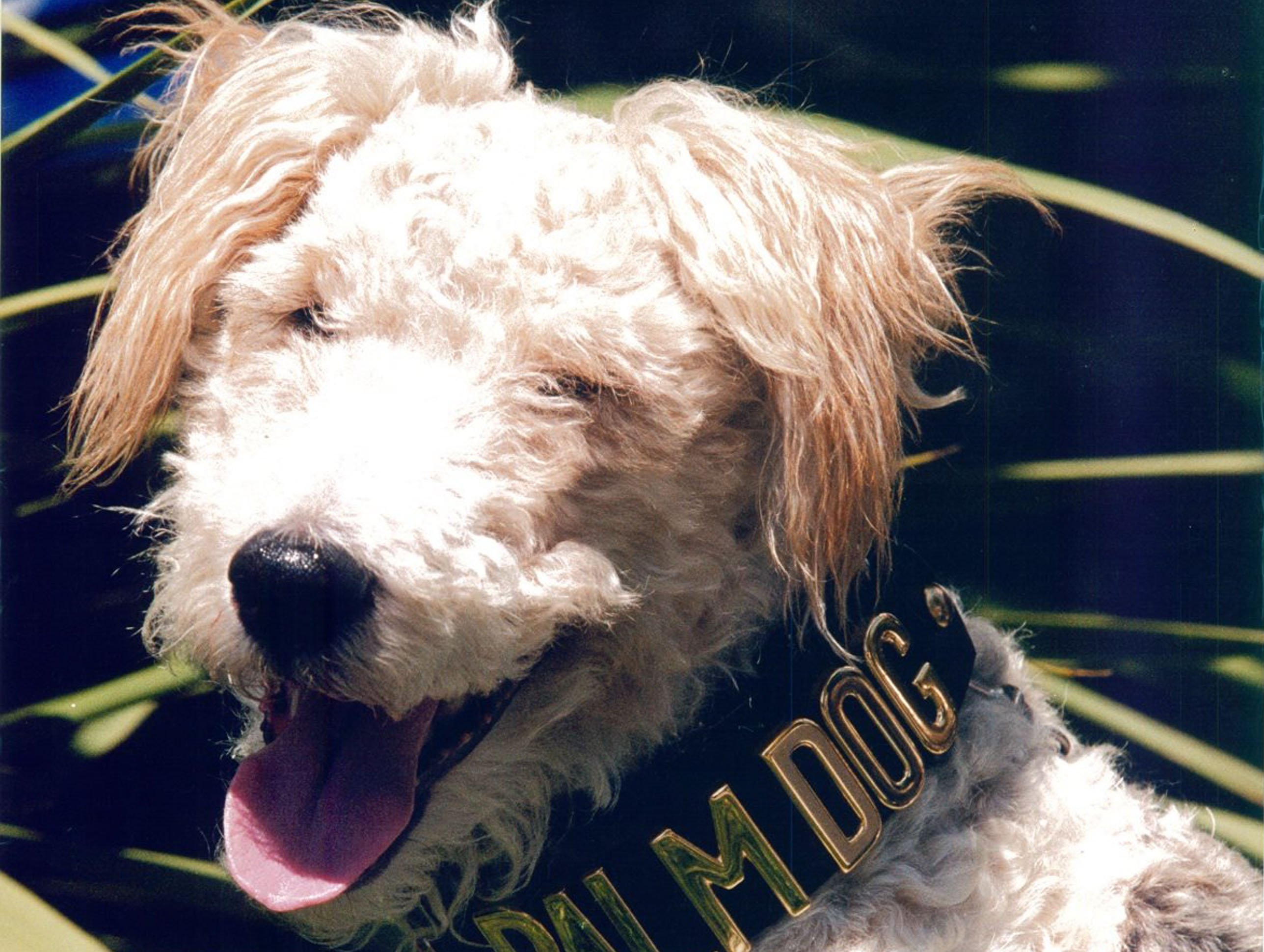 BAFTAs and Oscars are long gone, but next week is the time of the Cannes Film Festival, starting on 14th May, until the 25th. What does this have to do with dogs? Well, it will also mark the 19th edition of the Palm Dog Award, created by London born and raised journalist Toby Rose. Toby is also the creator of the FIDOS Awards, the Oscars of dogs, which take place in London every year. We spoke with Toby to learn more about both the awards and the plans for the future. Cover photo: Mutley; credits: Palm Dog 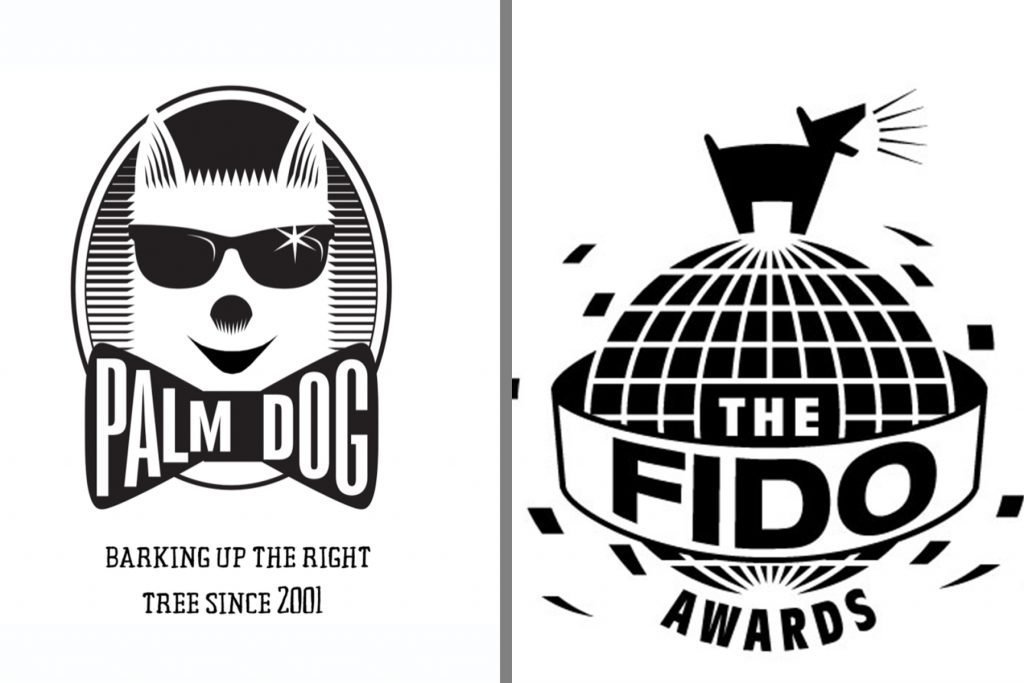 I meet Toby, the mind behind the Palm Dog and the FIDOs Awards, on a Saturday morning at busy Borough Market. He gives me appointment at his favourite place, on one of the streets embracing the market. I reach it cutting though the curtain of cheese smells and colourful vegetables, passing by stalls preparing healthy smoothies and butchers arranging big chunks of fresh red meat.

I take a seat at a table outdoors when I see him walking towards me with good pace, bike helmet in his hand, a partially unzipped dark hoodie with his reporter pass lanyard – that I imagine flapping during his ride – and a black canvas tote on his shoulder. He has to run to a show at the National Theatre after our meeting, as he explained over the phone.

Toby is a cinema journalist who has spent his life between London and Paris, and his jolly spirit fills the air as soon as he says hi. He is definitely not a shy person, and shortly after we start chatting over coffee, he makes friends with a couple sitting at the table next to ours, or, better, with with their blonde Cockapoo called Charlie. He is soon handed over Charlie for a photo in front of the market for his dog photo collection. 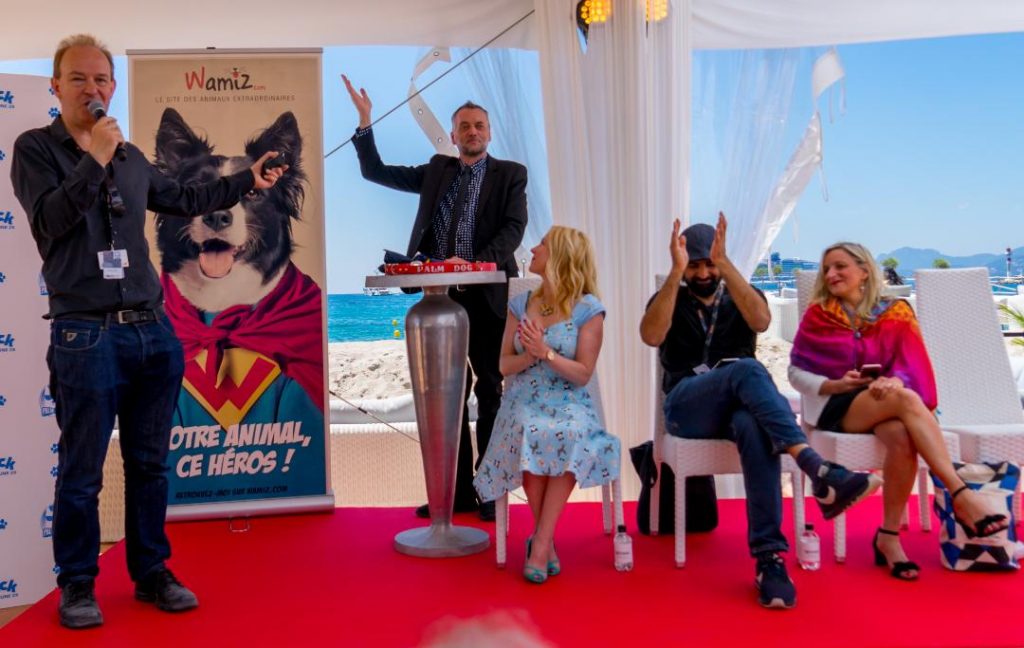 We start chatting about how the Palm Dog Awards started. Unsurprisingly, the story begins with a dog. To be precise, with a little Fox Terrier puppy rambling between Toby’s legs at a flea market in Champagne, as he recounts, that he would adopt without hesitating. A puppy he would name Mutley and he remembers dearly as we talk (more about Mutley in this article on The Guardian by the pen of Toby himself). At the time, Toby was living in France with his partner and Mutley would live the good French life, soon showing his three best qualities: being cheeky, lively and charismatic. Three traits that Toby adored in him.

Mutley soon became Toby’s wingman at interviews, being extremely popular with people, and celebrities in particular. Toby remembers the most remarkable moment in Mutley’s career: when, at Christian Dior Haute Couture, Renée Zellweger shouted a “hi Mutley” from backstage, after having previously met him at the Cannes Film Festival. It goes without saying that this made Toby extremely proud of his canine companion. In the late 90s, Toby also launched a pop up magazine called Mutt Mag for a Champs Elysée night club, which ran for 3 issues (which has nothing to do with a recent publication with the same name), inspired by Mutley.

Toby’s loyal pal eventually ended starring in the film “ID Crisis”, a film with Jean-Christophe Bouvet filmed in the Marais and partly in Shanghai in which he rallies dogs to fight evil masterminds. And with him as a sidekick at the Cannes Film Festival, also came Toby’s realisation that there were so many amazing dogs starring in films, but little or no recognition for their contribution. So Mutley inspired an award, starting in 2001, for the canine underdogs in films: the Palm Dog. 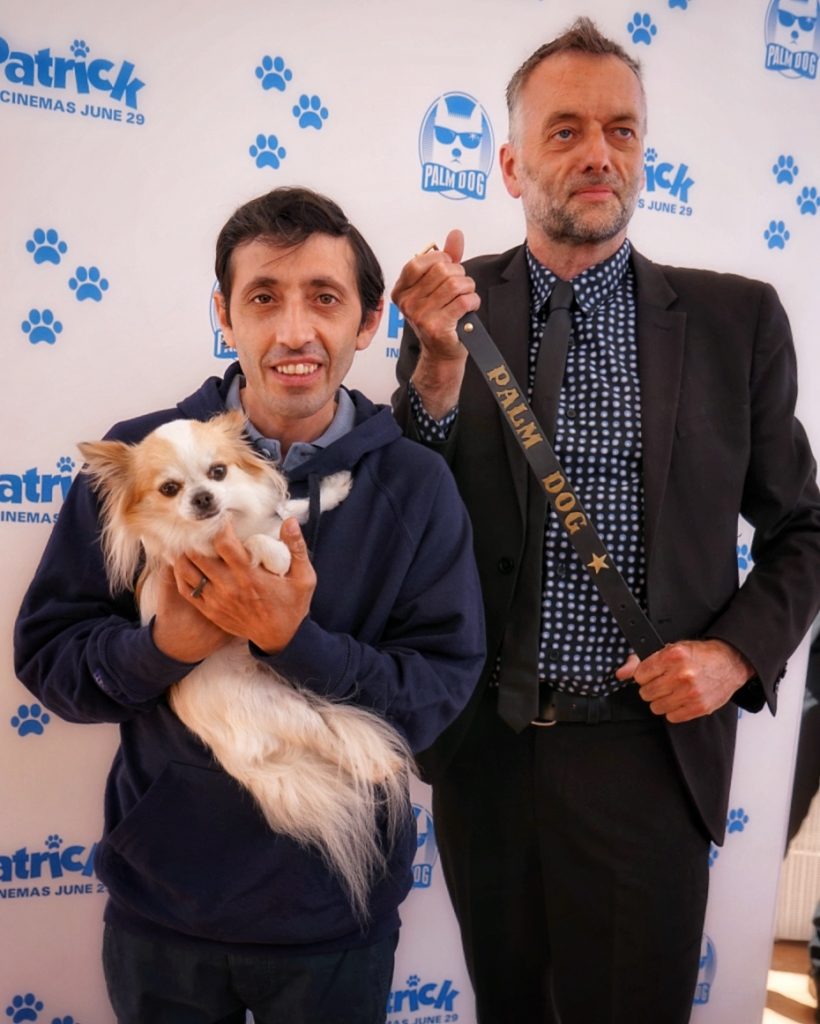 The name Palm Dog came from a play with words from Palme d’Or, from the Cannes Film Festival, explains Toby. In the beginning, it was just one award, but it turned out to be difficult to select a winner among so many great canine performers, so along came the Grand Jury Prize. In 2014 a new category followed: the PalmDogmanitarian award, inspired by a French film featuring refuge dogs and celebrating the bond between canines and humans.

Every year, the Palm Dog Awards ceremony takes place at the end of the Cannes Film Festival. Nominations for the Palm Dog are unknown until the festival starts, due to the nature of the event, which previews films and documentaries not yet released to the public. After the first week of the Festival the jury starts pulling together the nominations and canine actors are shortlisted, with a decision on the winners which is made by the Thursday. On the Friday marking the end of the Cannes Film Festival, the ceremony crowning the Palm Dog winners is held, recounts Toby. The award consists of a leather dog collar with the term “PALM DOG”, which was also sported by Tilda Swinton in a rather popular photo.

Toby continues explaining that there are normally around ten nominations contending the award and the jury is always spoilt for choice. Last year, the Palm Dog award went to the canine cast of Dogman, the Grand Jury Prize was awarded to Diamantino and the Palm Dogmanitarian award to Vanessa Davies and her pug Patrick. There is a list of all past winners you can check for the previous editions.

FIDOS Awards: the Oscars for dogs 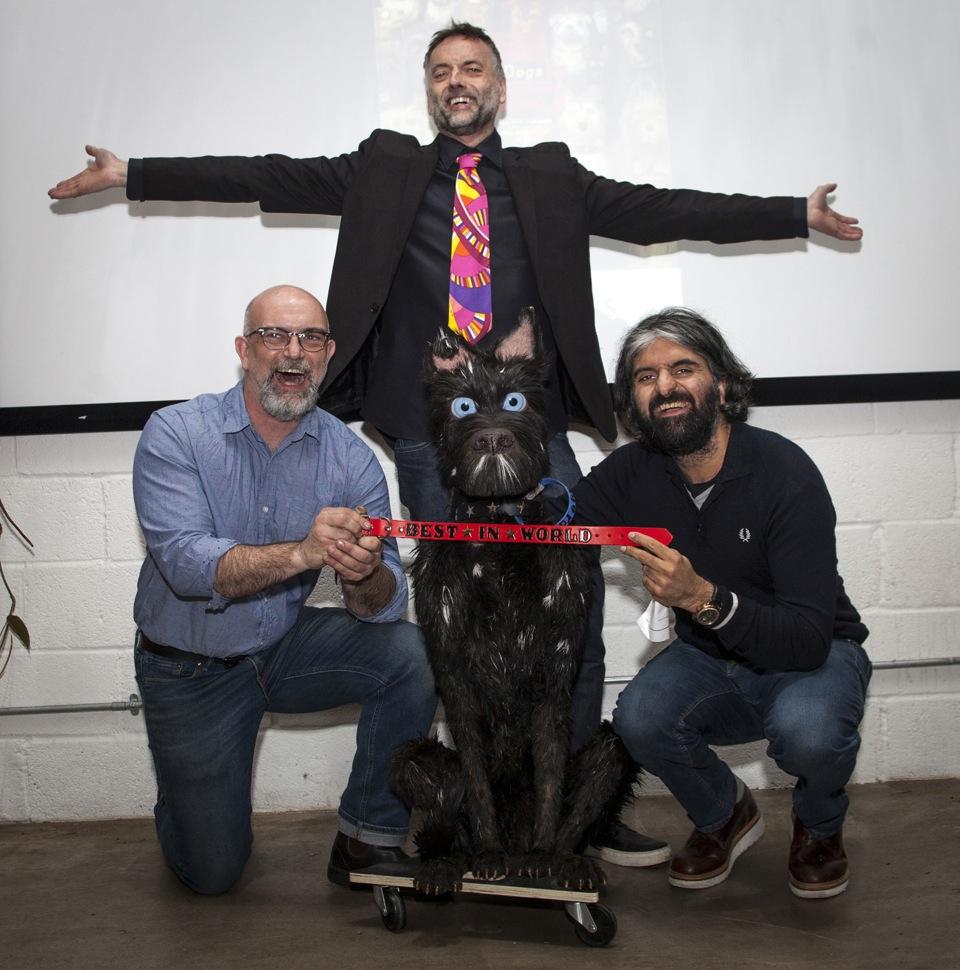 Toby Rose with Isle of Dogs creators, winners of the FIDOS Best in World and Rover Rom Com | Photo courtesy of Toby Rose

On an evening, in 2006, at the Rex Cinema in Soho took place a little ceremony open to insiders only, celebrating canines in films. It was a night to celebrate the Barkers awards, conceived by Toby’s creative mind. At the ceremony was also shown a “dogumentary” called “Sniffing the Red”, a collage of stories about dogs in films, which Toby explains was later lost to posterity.

The Barkers were what he defines the “precursor puppy FIDOS”, the awards he started the following year as “the Oscars for dogs”. The name “FIDOS” has a three-fold reference, Toby explains: it is an acronym standing for For Incredible Dogs On Screen, it has an Italian reference (“Fido” is the dog name par excellence in Italy), and it alludes to the true story of Fido (more on Wikipedia), a dog from Bologna who continued to go and wait for his owner at a bus station after he died, for the rest of his life. 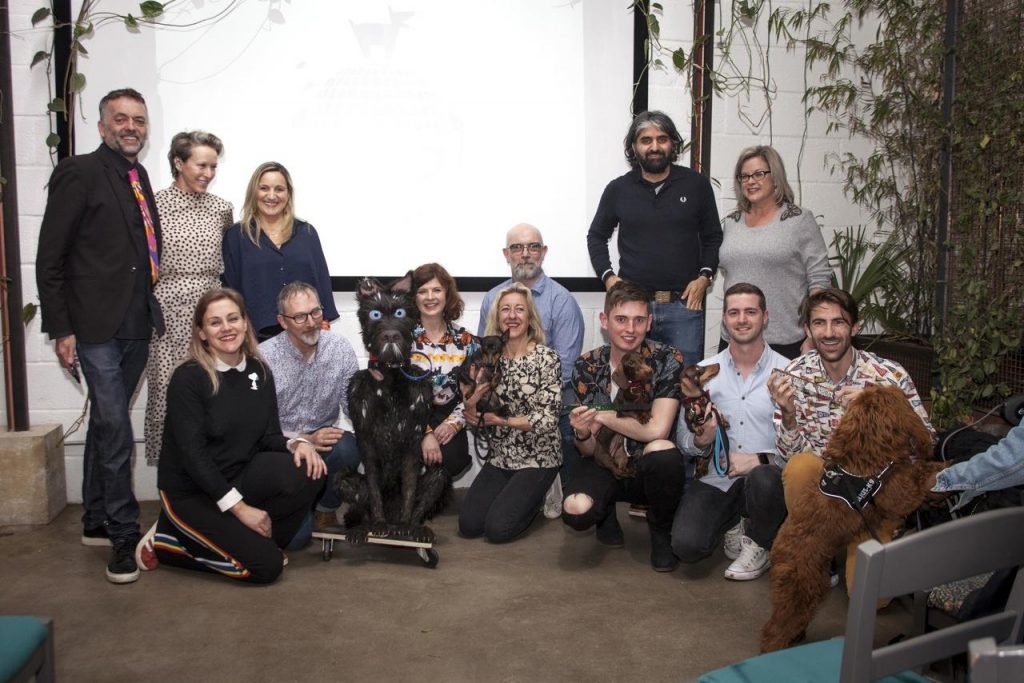 The FIDOS count six categories: Historical Hound, Comedy Canine, Rom Com Rover, Blockbuster Bowser and Mutt Moment, plus the Best in World category. As for the Palm Dog, there has never been a year where they have fallen short of candidates (or “caninedates”).

This year’s ceremony, open to an intimate audience, took place on 27th February in Hackney. “Isle of Dogs”, which to our disappointment didn’t win the best animation Oscar this year, received the well-deserved Best in World FIDOS award and the Rover Rom Com award. Andy Gent, the puppeteer behind the film, participated to the event bringing along a giant-sized Chief puppet, to receive the collar. The FIDOS ceremony, this year, also included the Palm Dog USA, a brand new award for canines across the pond, which was given out by an American journalist at the ceremony.

As our chat comes to an end, I walk with Toby through Borough Market. Talking about Renée Zellweger I had remembered that I never saw Bridget Jones’ door, so Toby makes sure I fill this gap and we say goodbye. If you are curious to see who wins the 2019 Palm Dog award check their Facebook page later this month.