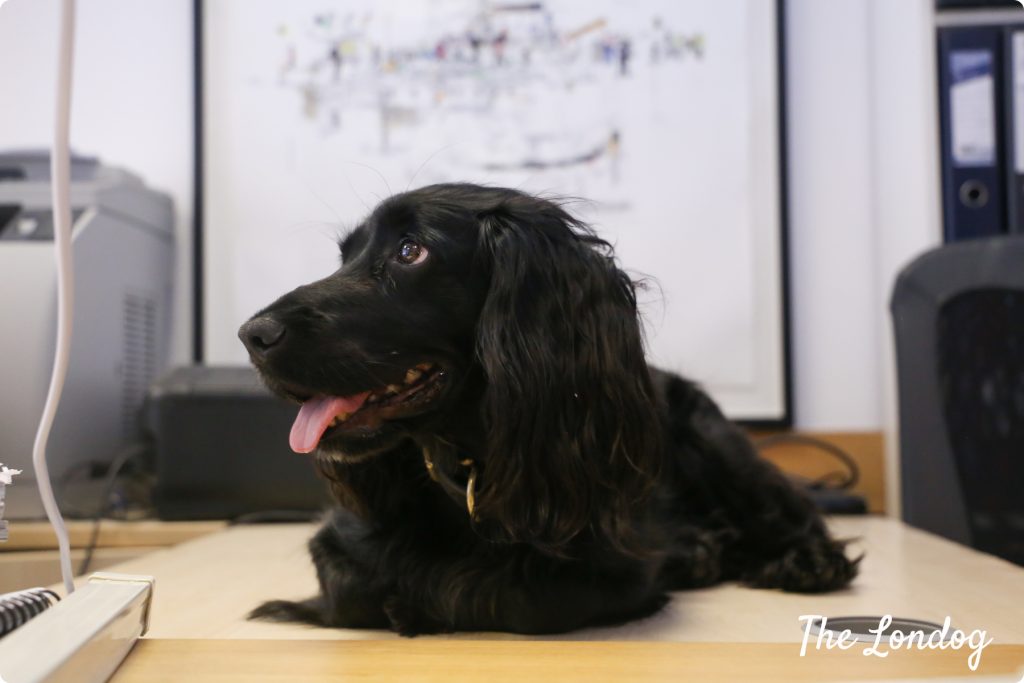 Lola is the eight-years old Cocker Spaniel of Zambuni, a PR and marketing agency based in Mayfair. She is referred to as Princess Paws, Urban Gun Dog, Wiggles and Sqwiggles, and is a rising star. In fact, she was recently interviewed by The Times Weekend, which described her as Britain’s most well-connected dog. She closes the sixth edition of the Office Dog Series featuring as Friday office dog. 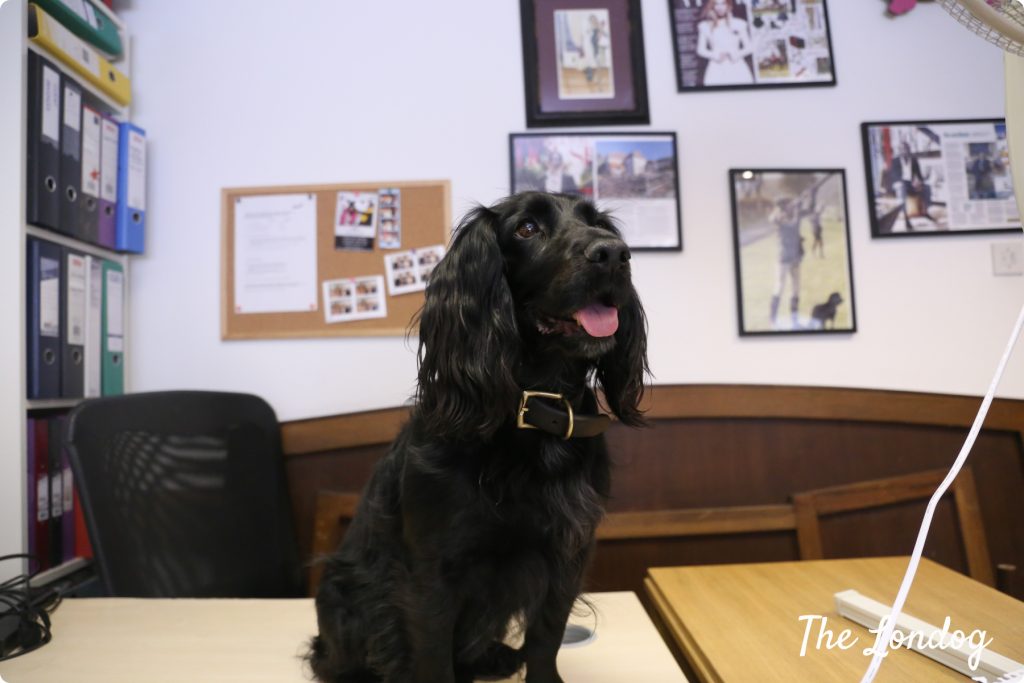 Despite her glamourous life and acquaintances, Lola is anything but snobbish. On the contrary, she is very friendly and easy-going and as soon I set foot in Zambuni’s office, she glanced at me and quickly ran to pick up her leash, inviting me for a stroll.

Lola is Claire’s little shadow and the “absolute love of her life”. Claire considers Lola her full time companion and they are rarely apart. Together they enjoy both city and country life and Lola has a double job: PR in town during the week and gundog in the countryside over weekends.

Claire recounted that she knew Lola’s mum, Flash – belonging to leather designer Bill Amberg – as having a loving and biddable nature, so she was glad to jump at the opportunity when Flash had a litter. “Bill gave me the liveliest puppy as at the time I was shooting frequently and lived on a 300 acre estate. A few months later, I found myself in a basement flat in Camden with Lola and our Border Terrier, Purdey. One of the reasons I started my business, Zambuni PR, was so I did not have to leave Lola and Purdey alone or with dog walkers. We started the hunt for the ideal dog-friendly office that we could afford and for the past five and a half years we have been in a small, modest office in Mayfair, literally opposite an entrance to Green Park. All our clients, without fail, are dog friendly and love Lola”. 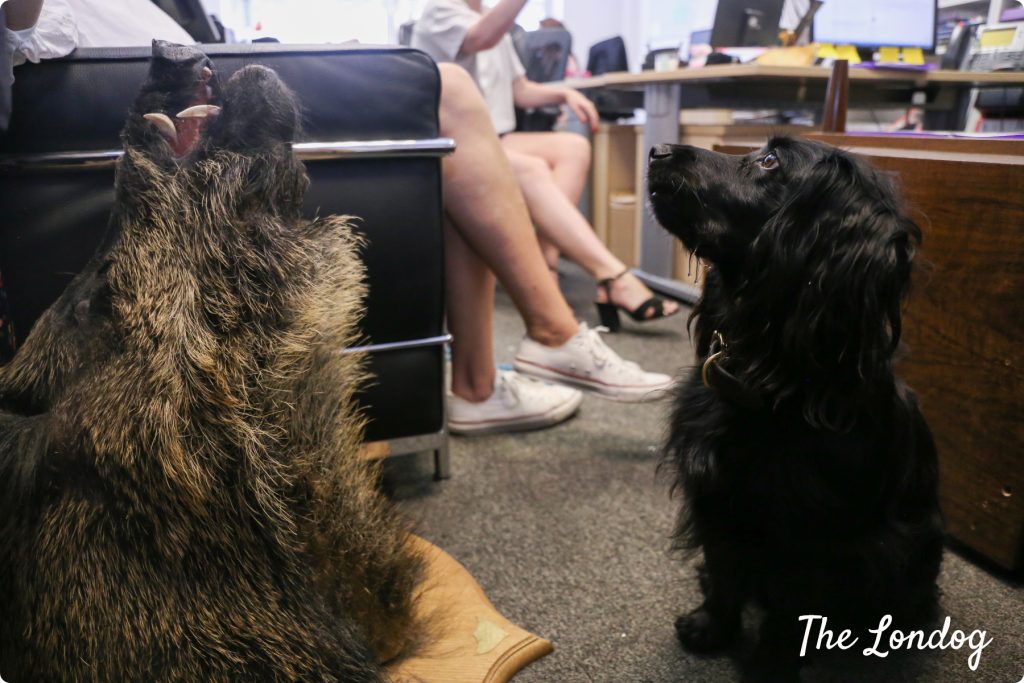 Claire remembers that, when she was younger, Lola was absolutely bonkers. “Being a working cocker spaniel it is almost impossible to tire them out and as an athletic, intelligent, working breed, they need loads of stimulation. Lola was trained as a gun dog, what she is bred to do and this steadied her behaviour. Her madness had boundaries and an outlet. We have spent many days in the field together working on small shoots which has only strengthened our bond”, added Claire.

Lola is also known for…

Loving:
Love, long walks, evenings in on the sofa, her squid and fish toy, Orvis memory foam beds, being out shooting with mum, fishing and swimming in the rivers, chasing a ball.
Hating:
Heavy rain, being brushed, being washed
Funniest habit:
Charging around like a loony when home from a wet walk. Pushing her nose into Claire’s face in the morning when she wakes up.
Most annoying habit:
Licking 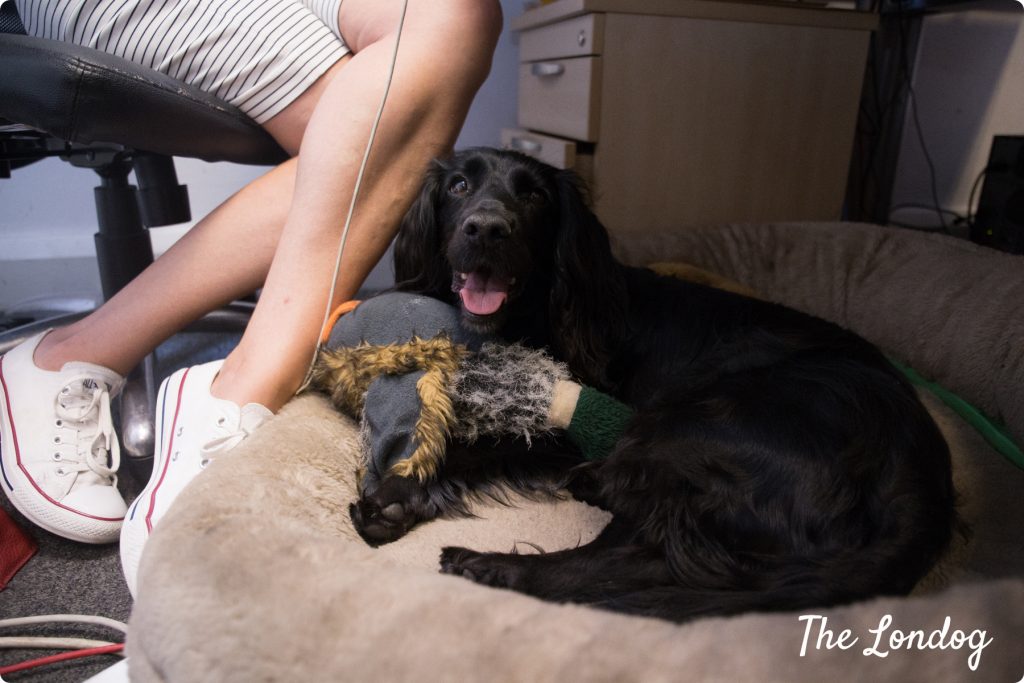 Lola has a full-time role at Zambuni PR where has been working since its start, five years ago. When at the office, Lola will retrieve her stuffed duck toy if you throw it, or lay under Claire’s desk, where she has her large bed with plenty of tennis balls, and be always ready to play the occasional fetch. During her day, she ends up spending most of her time between walks curled up in her bed, but she has an active Instagram to populate, her own blog, Facebook and Twitter.

She gets lots of walks in Green Park, and sometimes even forgets she is in town… “I love it when she stalks squirrels” said Claire. “This is her favourite city pastime and she goes into slow motion stalking mode to ry and creep up on them. It’s rarely successful and they scamper off well before she starts the chase. However, it gives me so much joy watching the whole process that I spend most of my time in the park hunting for squirrels with her”. 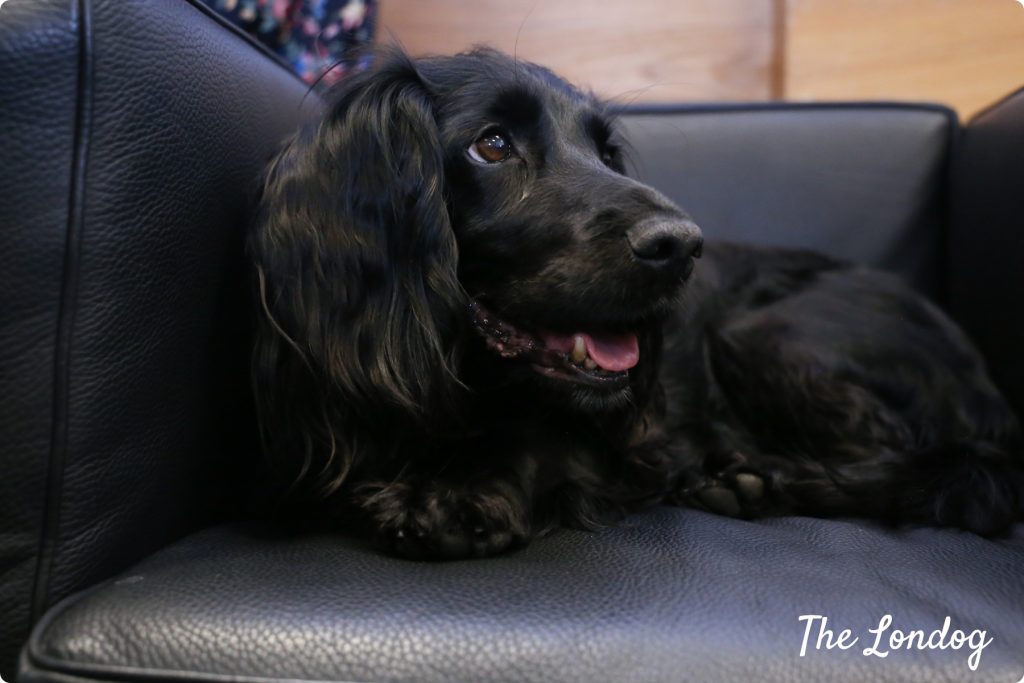 In addition, Lola regularly goes on clients meetings and, sometimes, to events. Zambuni works with some dog focussed brands, such as Orvis and new dog food brand Nineteen 87; furthermore, Claire and Lola like to discover new gems and make friends in Mayfair. “All the pubs and hotels we loom after pride themselves on being dog-friendly as do the brands with shops. It’s funny, but all the best luxury shops, hotels and clubs in our local area, Mayfair, are dog friendly from 5 Hertford Street to Pickett to Temperley to Boisdale”, noted Claire.

But Lola in some ways likes to be pampered. “Lola is not comfortable on the ground, when we are at a meeting or out for a drink. So they always pull a chair up for her at Shepherd Market Wine House and Little House”, recounted Claire. “I love the way she thinks this is completely normal and watches each person intently as they talk as though she understands. She expects cookies at Home House, has been fed wagyu beef at 5 Hertford Street and basically has London life sewn up.”

Lola concludes the 6th edition of the Office Dog Series, stay tuned for the next one, coming soon…