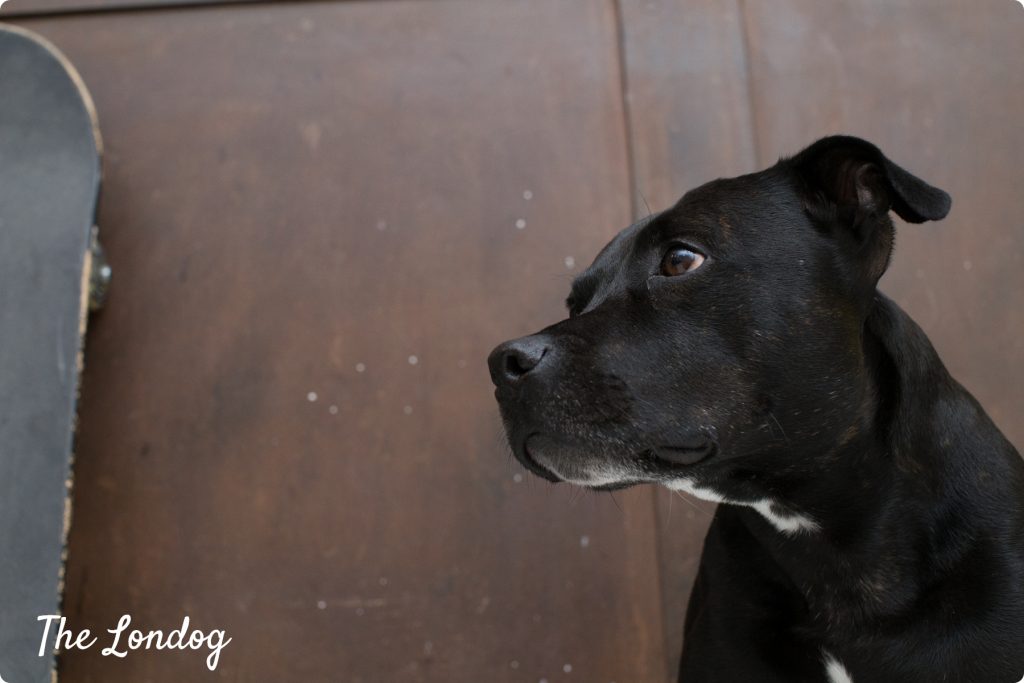 The first time I met Dave, a few months back, I was at a café, having a hot chocolate in front of the screen, on one of those days when life gets in the way and you find yourself working almost forgetting to breathe. While owner was grabbing a coffee, Dave headed over to my chair, to lean over my leg and invite me for a cuddle. Soon after, I discovered that he was the office dog of Hi-ReS! London, part of SYZYGY Group, a digital advertising & marketing group. This is his story, featuring as Tuesday office dog in the Office Dog Series. 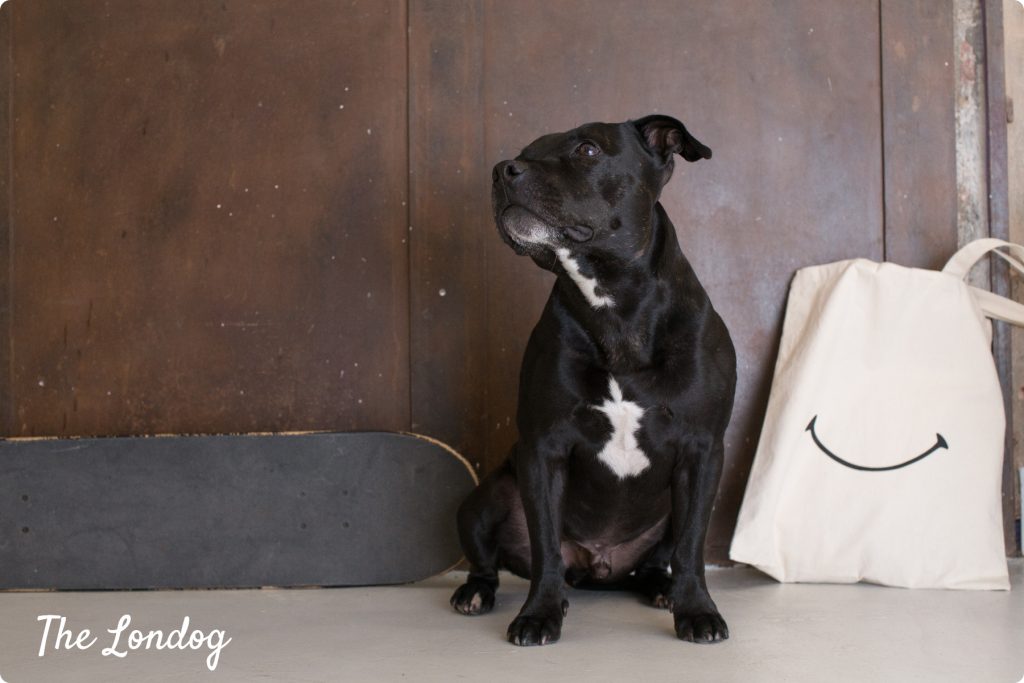 Dave is a 7-year old Stafforshire Bull Terrier, who came into Linda’s family as a puppy. “Dave Famous, or Dave the Brave, is a bit on the small side, but mighty strong”, she says. “He’s not very brave actually, but he’s very defensive if any dog comes close to his turf. That’s the only annoying thing with him. Everything else is wonderful. He is very patient with puppies and smaller dogs, but prefers if bigger dogs stay away.”

For this reson Dave is quite happy not to have to share the office space with other furry co-workers. Although he loves attention, he is not wordly, and does not have an own Instagram account – but his guest appearances on Linda’s one are not rare (and you can look out for #davethedog if you want to spot some)-.

Dave is also known for…

Loving: Clearing our garden of cats, and when we throw balls in the park and snuggles on the sofa.
Hating: Baths, showers and walkies in the rain.
Funniest habit: To sit on people’s feet. Anyones will do, it doesn’t matter if its a total stranger.
Most annoying habit: Going absolutely mad if he sees a cat. Actually, if you say the word ‘cat’ he goes bananas, that’s how bad it is, and it’s quite annoying. We should have introduced him to cats when he was a puppy, its a bit late now I think. 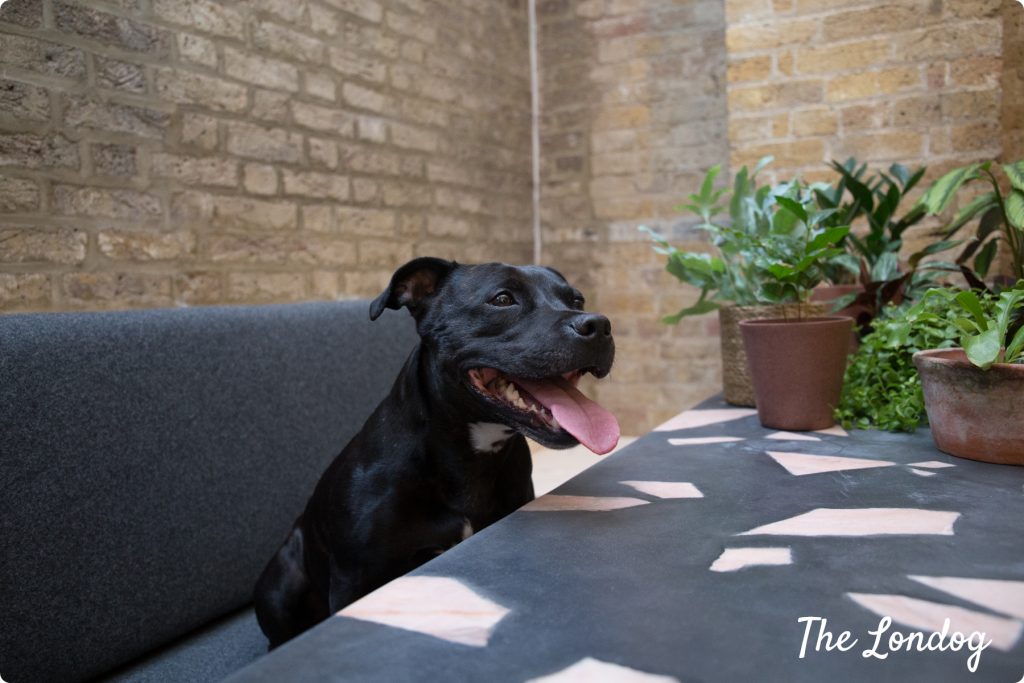 There are dogs who are left out of the fun and can’t join their owners to work and then there are dogs, like Dave, who don’t just have one job: they have two!

When Dave is not at Hi-ReS! with Linda, acting as an office dog, he enjoys the perks of being a hair salon dog at her husband’s salon in Angel, Shades N1. Linda recounts that when there he meets and greets all the customers and keeps those waiting company.

“When he’s at Shades he meets people all the time, so gets a lot of attention”, she explains. “When he’s here with me he’s more into the relaxing side of life. He is mostly sleeping, until he is all of a sudden chasing balls around the office or plays tug of war with one of us, and then he sleeps a bit more. I think his favourite bed is here at my office. It’s well cosy and snug. We do walk a lot though, starting with at least one hour walk at the park, before we get on the train to get to work”, recounts Linda. 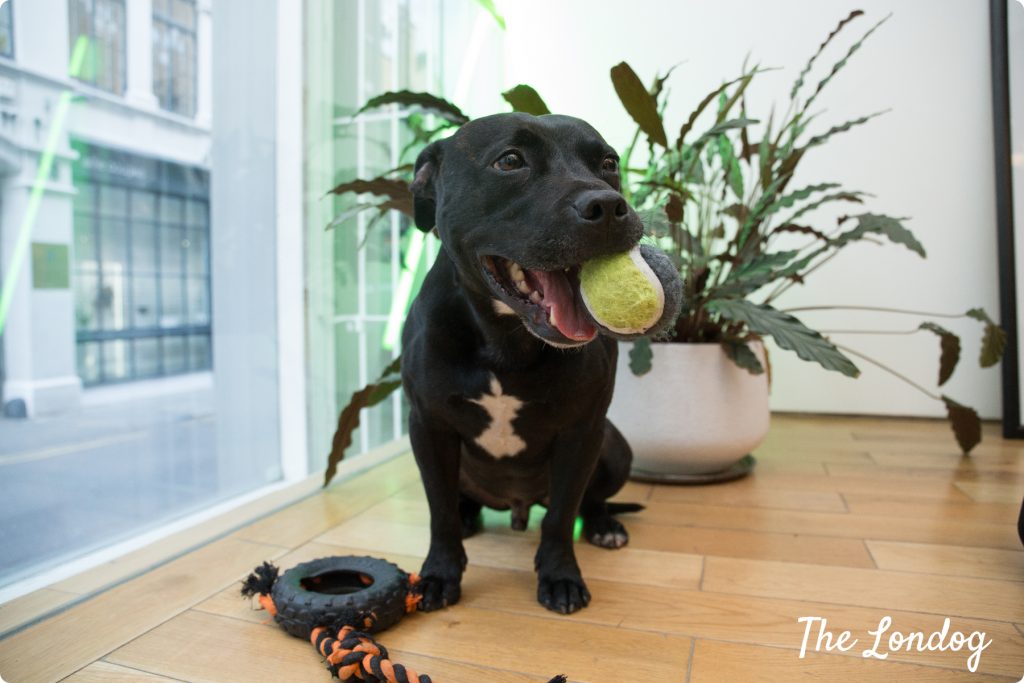 As I suspected from our first meeting at the cafe, Linda confirmed that Dave is quite an affectionate dog and likes getting all eyes on him. “And if he doesn’t get [all the attention] he’ll take it by simply walking into your legs or sitting in front of you making noises”, she giggles.

At the office he is not only renowned for cuddles, though. “I think my colleagues will all mention when he has farted. In his defence though I’ve always asked people NOT to feed him human food. I think that’s what kicks it off. And when it does, it’s bad… Staffordshire Bull Terriers have quite sensible tummies, any change of diet results in a lot of wind. REAL bad”, confesses Linda. 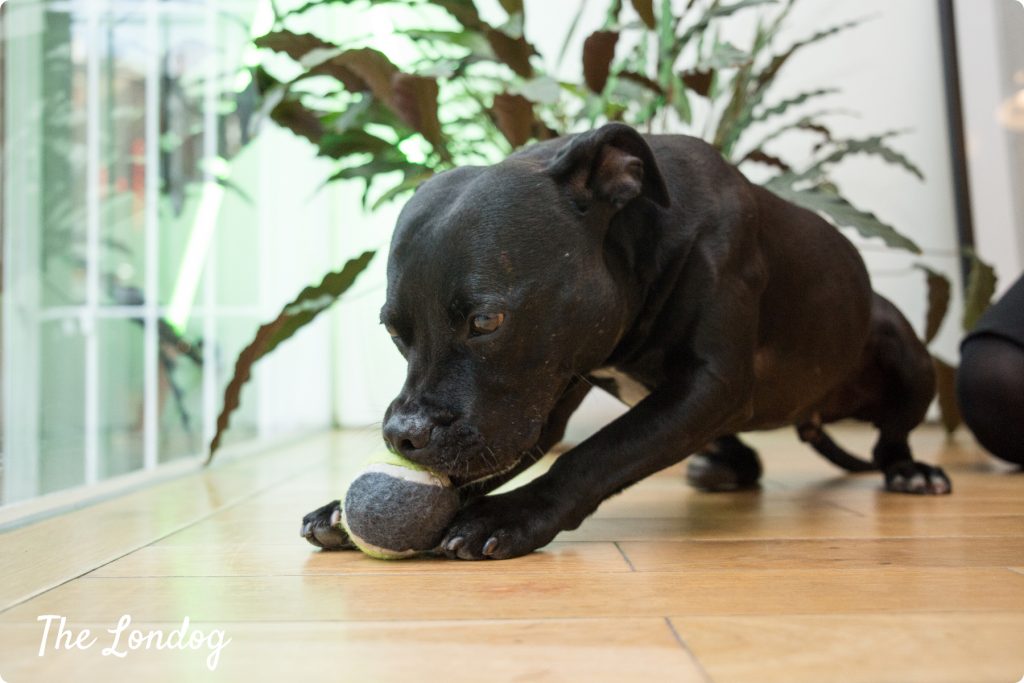 HiReS! London has recently been moving offices to its parent company and Linda hopes Dave will continue to be allowed at the office a few times a week, “The office is much bigger and of course there are more people, so the risk that someone is allergic on not very comfortable around dogs is higher, so we’ll just have to wait and see how it goes.”