By The LondogDecember 5, 2019No Comments 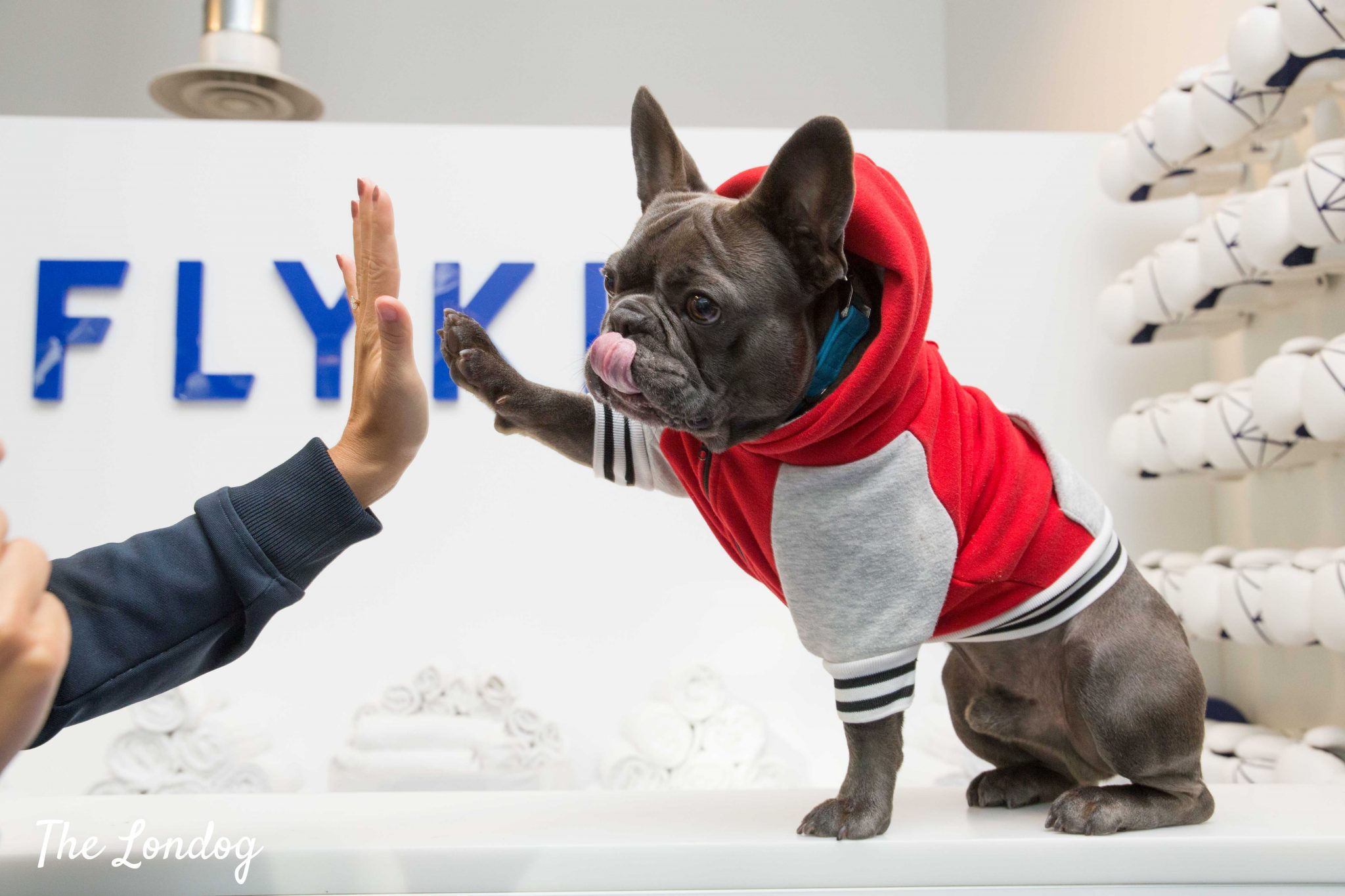 Tokio is a 2-year old full-of-beans French Bulldog who splits his time between his role of gym dog and mascot at FLYKICK, a kickboxing-inspired group exercise fitness studio in Marylebone, and that of Chief Morale Officer (CMO) at London Cocktail Club. This is his story in the Office Dog Series. 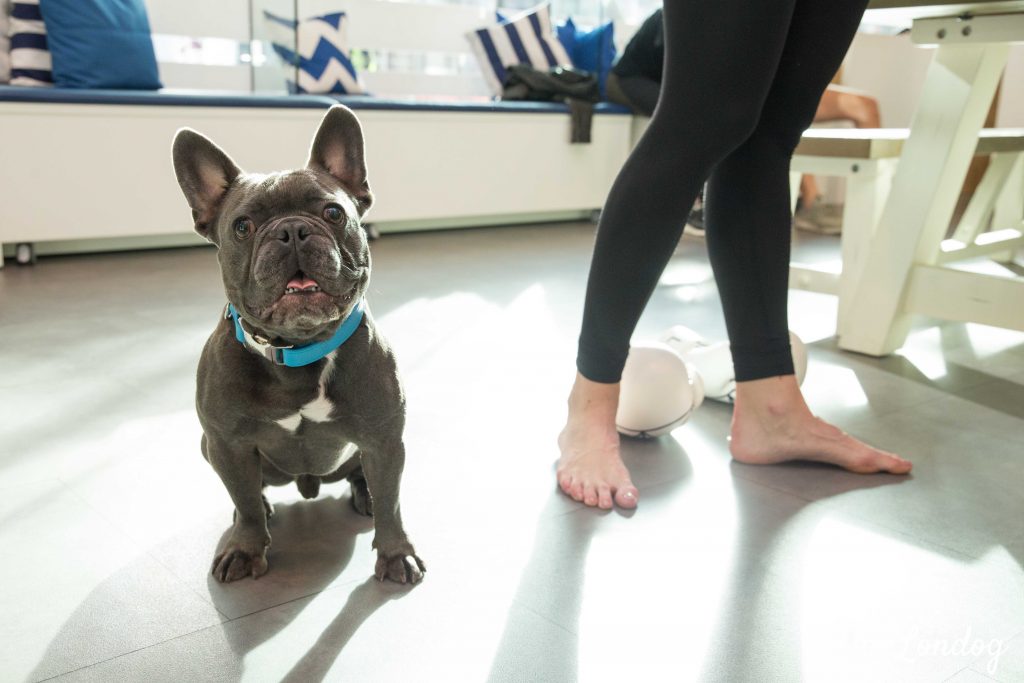 The first image that came to mind when I first heard his name was the character from Netflix series Money Heist (if you haven’t watched it yet you really should use some evening time to catch up), with whom Tokio may not share the gender, but definitely shares some character traits, like being strong-minded and passionate but a piece of cake on the inside.

His mum of him says, “Tokio can be stubborn, this however is outweighed by his loving and affectionate nature. He strongly believes he’s more of a human than a dog but struggles to tell this to people in conversation and lacks the ability to type it as he still waiting for his opposable thumbs to grow. He manages to translate this to his parents with his facial expressions. He tries to be a security dog, but it’s more likely he would lick and kiss you to death. Tokio is a social butterfly in a world of giants, just don’t leave him home alone.” 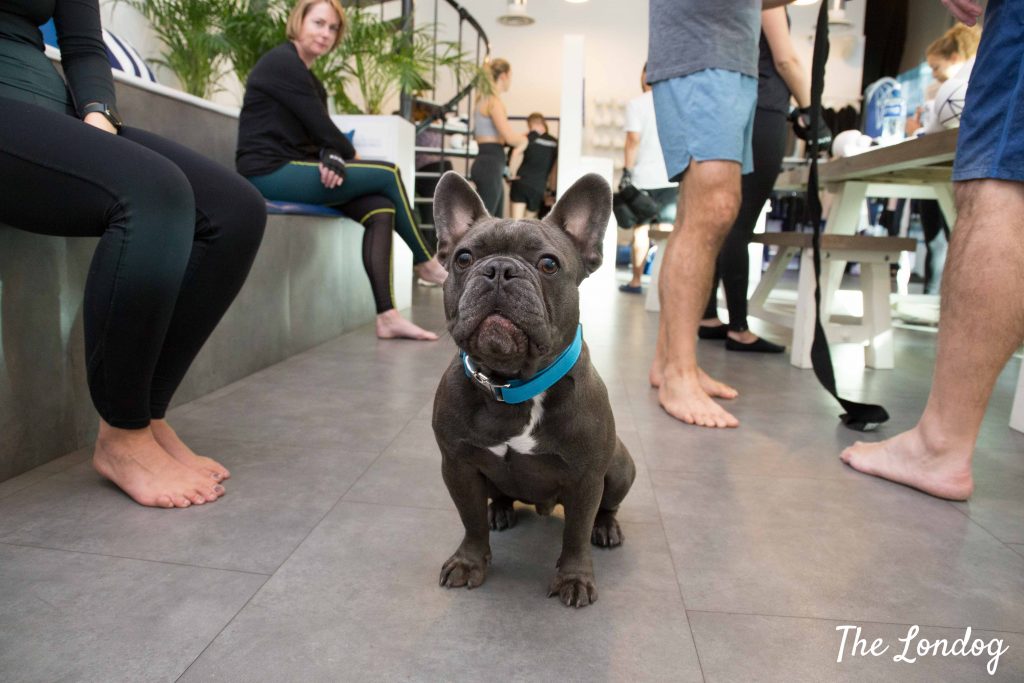 Tokio also goes by the name of Munchkin, Dingo, Baba and started a gret dog-friendly tradition at FLYKICK, which allows guests to bring in their dogs and also hosts monthly dog-friendly sessions (more about FLYKICK dog-friendly policy further down).

Tokio is also known for…

Loving: His blue squeaky ball… more than anything. His Mr Fox toy in second place (he has 5).
Hating: Alone time. He hates the rain but loves a bath.
Funniest habit: Rubbing his chin on the floor where his bed is, pushing it around from place to place. After a shower/bath, he gets the zoomies, and after drying off he runs to his parents’ bed and races around the bedroom in and out from under the covers.
Most annoying habit: Snoring like a trooper.
Most famous/infamous episode: Tokio was a guest at London Coffee Week, he was walking around prancing, showing off. An unassuming gentleman placed his espresso martini down on the ground for a moment, Tokio strutted right across the room and ploughed his face into the martini glass consuming the remainder of it’s contents. When the gentleman looked around angrily asking ‘who did this’ Tokio just looked at him and said with his facial expression, ‘I’ve no idea, maybe that guy over there’… Little did Tokio know, he had a foam moustache all over his face from the cocktail. 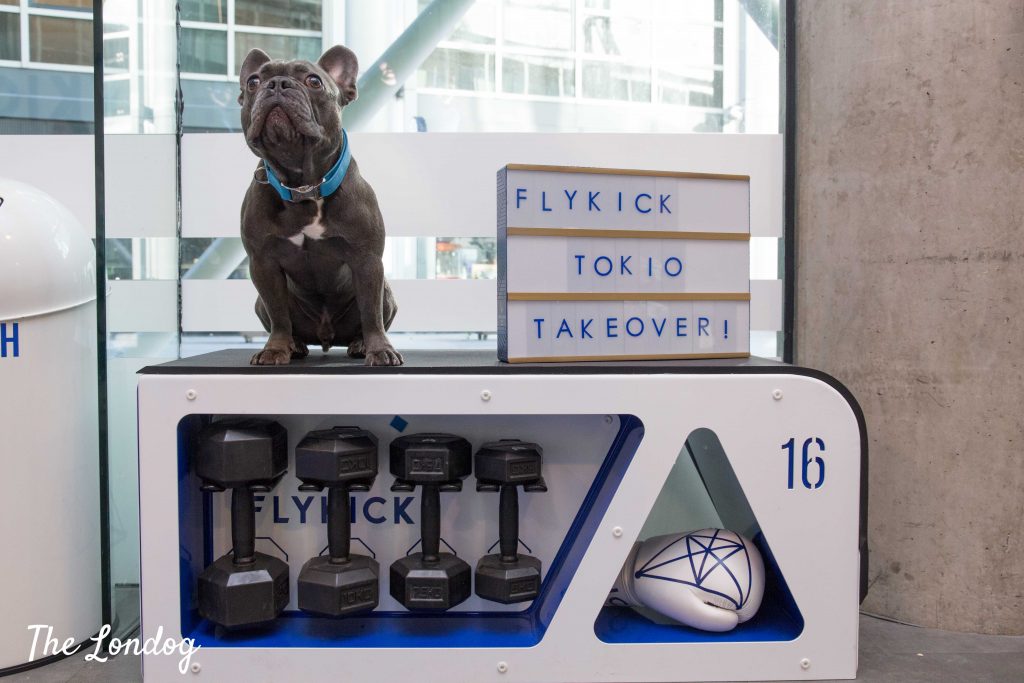 Tokio took up the position of CMO at LCC when he was just a tiny ball of softness. When he started at FLYKICK he was even classified as one of their founding instructors (and of course he has his own profile). “He’s been spreading cheer and raising morale for all head office staff consistently since. Tokio occasionally goes to the LCC bar sites to check on the bartenders and managers, usually to give them a pep talk before shift,” recounts his mum.

His days start with a tube commute, but of the relaxing kind: surrounded by all those new humans there is no shortage of attention and unlike most of the other commuters it’s not difficult for him to find somewhere to sit, his mum recounts. In addition, he normally travels out of rush hour, so it’s a comfortable trip both for him and his humans. 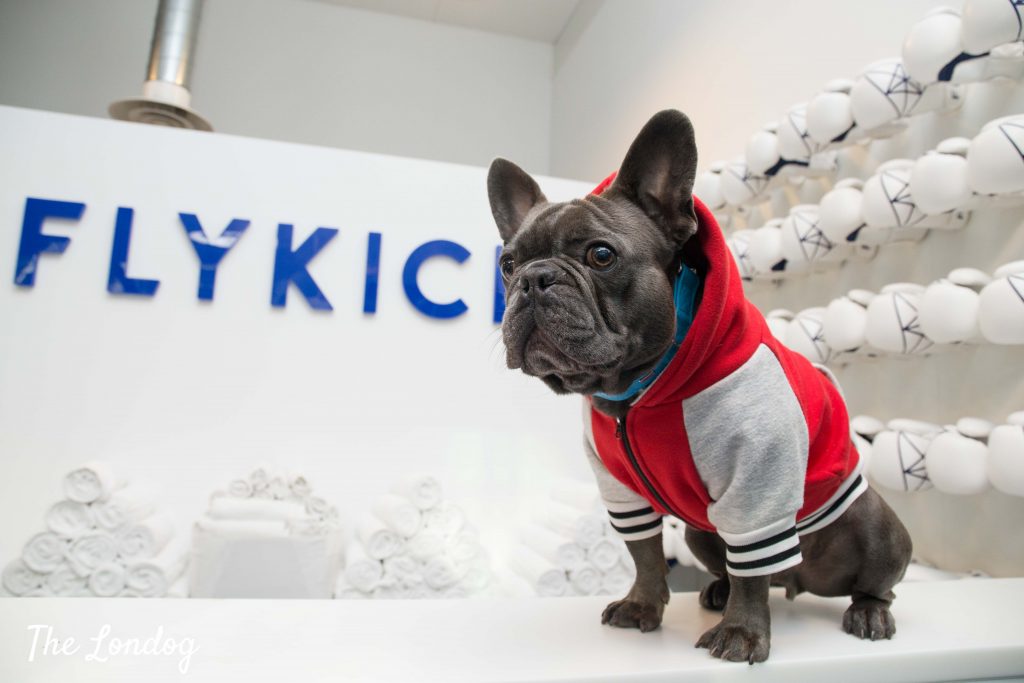 Between his two workplaces, FLYKICK is where Tokio enjoys the most perks, as he goes for a quick run around Regent’s Park – just across the street from the studio – during the studio’s downtime and often joins his humans at their favourite dog-friendly cafe and cocktail bar, The Refinery, right around the corner, after work. The area where London Cocktail Club office is located, in Fitzrovia, is a little bit trickier as there are not many green spaces nor dog-friendly restaurants in the area, however, there he gets to have some social time with his fellow four-legged. “At LCC Tokio very often hangs out with his brother Dexter and sometimes has a pleasure of his girlfriends Aayla & Maggie, when come to give him little after noon kiss. All Frenchies,” giggles his mum.

The studio is usually quiet when Tokio arrives, after the morning classes have finished, so his morning routine involves mostly playing with the Front of House team who are all his surrogate parents. “He’ll accompany them on regular checks around the entire studio and changing rooms to make sure everything is as it should be (maybe with the occasional nuzzle of his head into the huge pile of towels for good measure),” says his colleague Miranda. 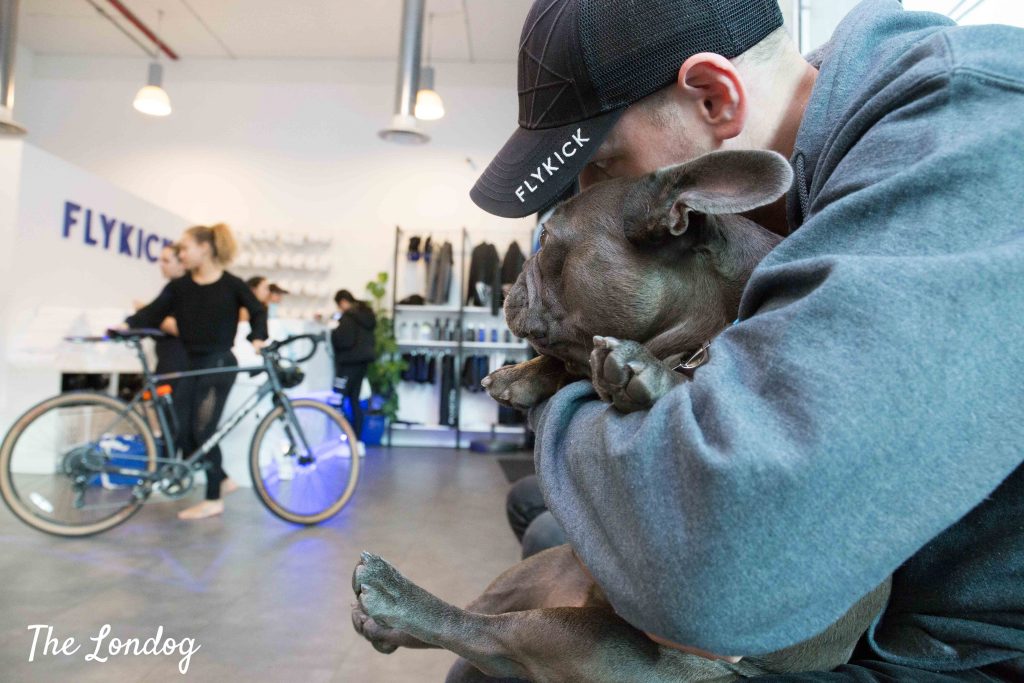 “At midday the guests start to arrive for lunchtime classes so Tokio ‘helps’ with check-in by making sure that every guest receives a sniff and a hand lick alongside their boxing gloves and wraps. After he’s spent a lot of time making new friends and wrestling them for his favourite FLYKICK boxing glove, he’ll retire to his favourite nap spot under the front desk until his mum and dad come to take an evening class and pick him up.”

When I visit I witness both the busyness and the quietness of the studio and observe Tokio charging around among trainers and naked feet, benches, boxing gear and gloves and people smiling at him. “Very occasionally we have people who are afraid of dogs so if Tokio is in the studio then we just have to pop him upstairs. It happens so rarely that it’s not really a problem though!” explains his mum. 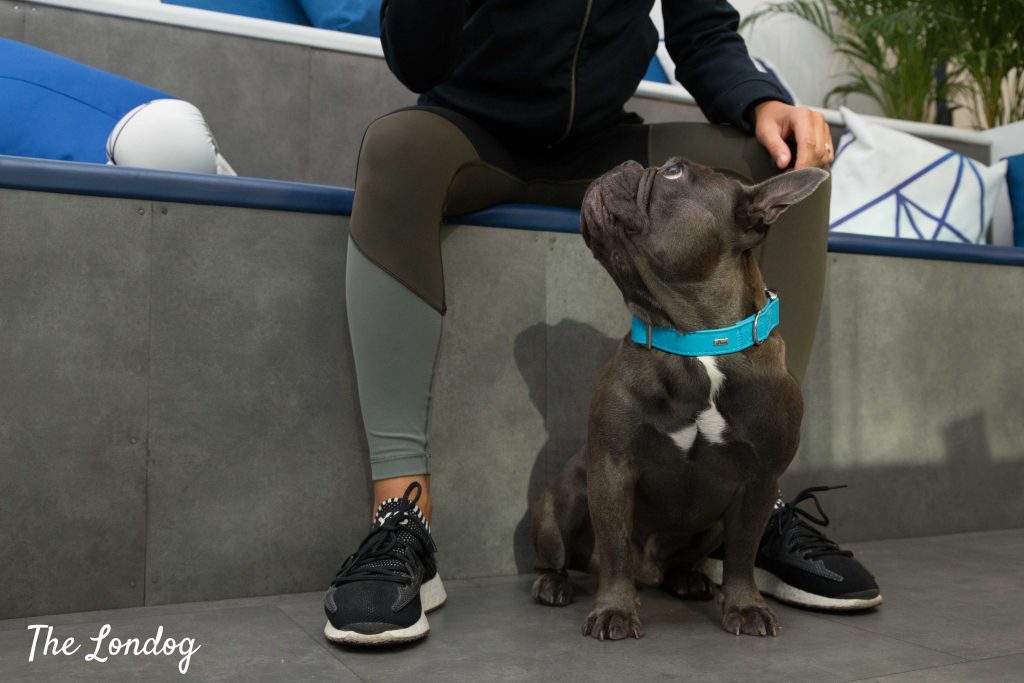 FLYKICK has been dog-friendly since its opening and dogs are welcome every day of the week and at any time of day in certain areas. FLYKICK staff explains that they prefer that they aren’t kept on a leash because they end up getting a bit restless, so they are free to roam around the reception area, while they aren’t allowed into either of the workout studios or into either of the changing rooms (“it’s only ok to see your own human naked” they explain).

“As long as your dog doesn’t mind leaving your side, is toilet trained and loves other dogs then he/she is welcome at FLYKICK any time,” continues Miranda. “It’s important to make things as easy as possible for people with dogs in London! At FLYKICK we do get other dogs quite often as we’re a super dog-friendly studio and we know how tough it can be finding time to do things when you have your pup in-tow.” 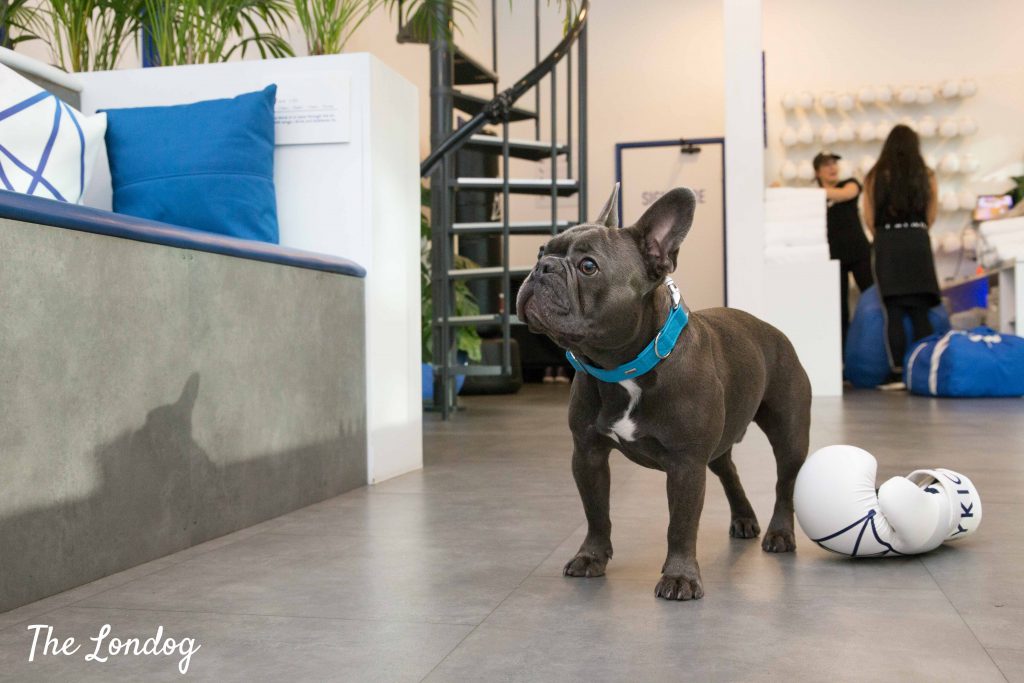 On certain Saturdays they even host “Puppy Parties”, where they encourage as many members as possible to bring their dogs in while they train so that they can all hang out together and get heaps of attention. “Tokio absolutely loves it when he’s got friends around and the more the merrier in his opinion, although there is always a sense that he is the ‘OG’ and the others definitely respect that.”

But even when Tokio is the only dog at the studio, he spreads joy. “Our favourite thing about Tokio is the positivity that he brings to FLYKICK, he’s always keen to meet as many guests as possible and put a smile on their face. Our kickboxing classes are amazing for mental health as it is, and often we have people come in who have had a very bad day and just want to let some stress out. Tokio helps improve people’s mood even more with his hilarious running around clutching a boxing glove like a crazy person and it brings our guests together,” concludes his humans. 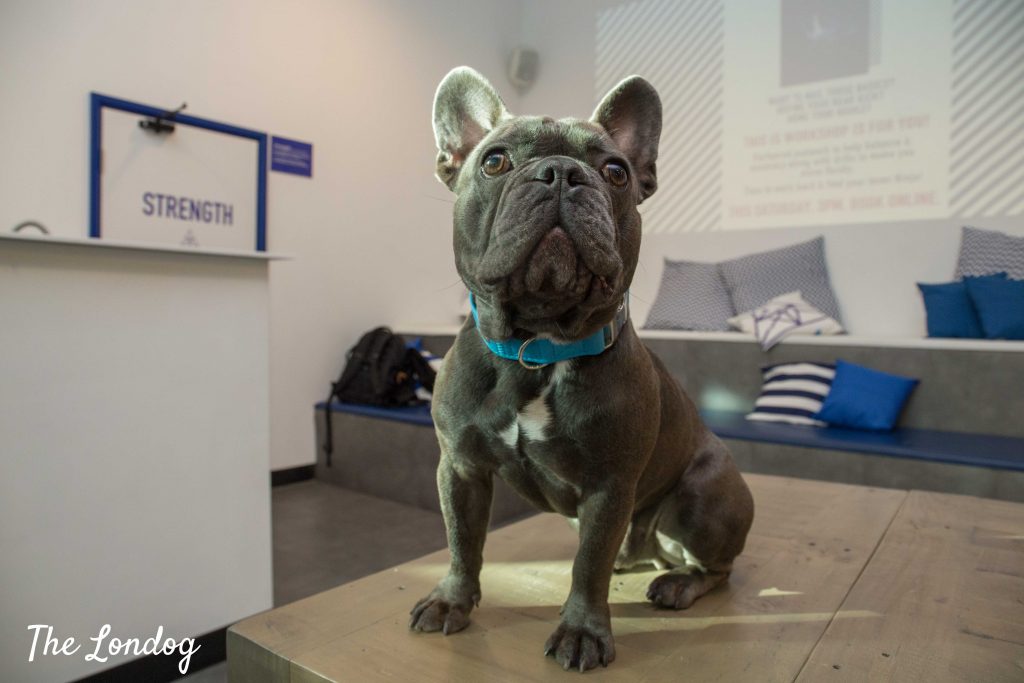