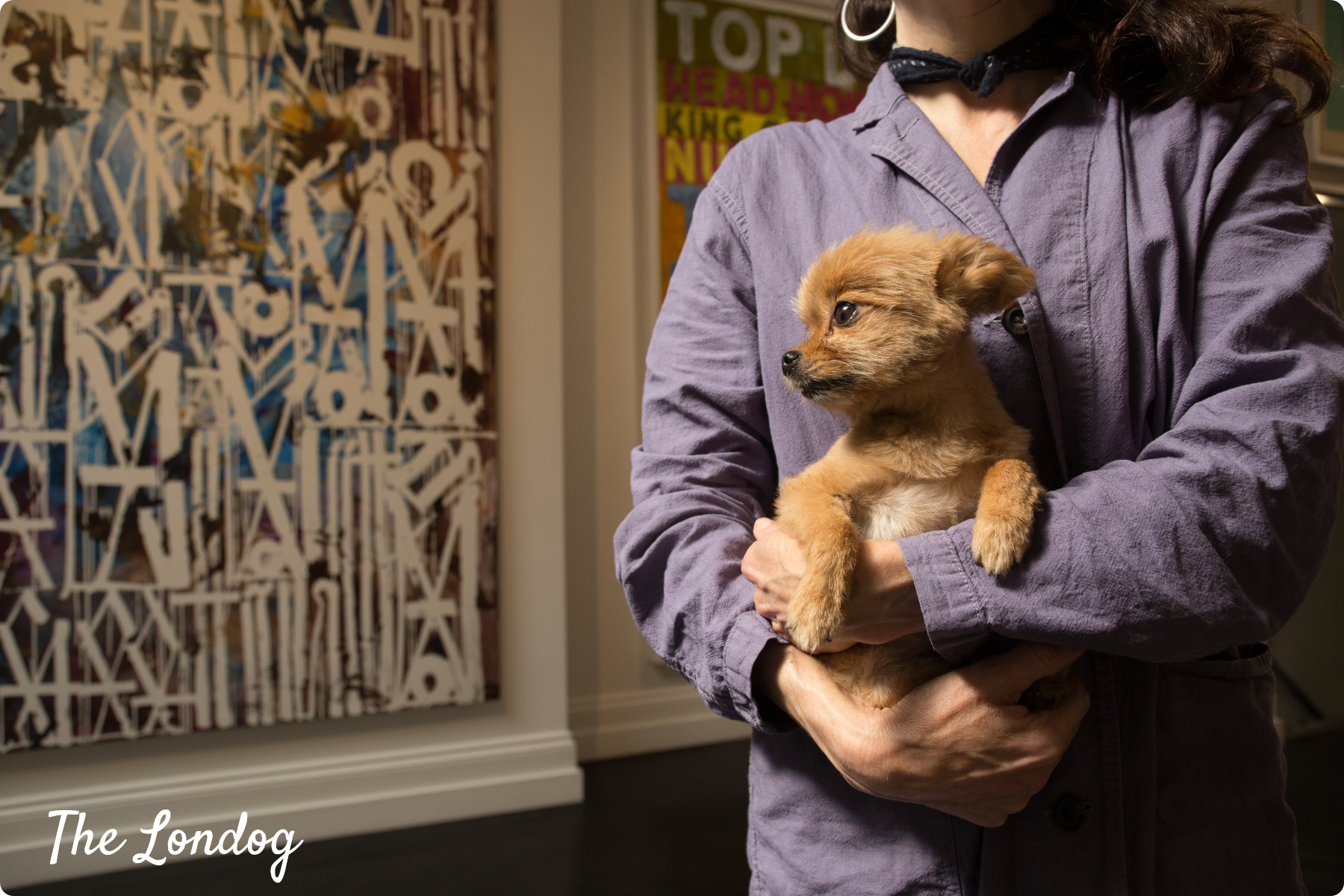 If you counted the number of vernissages she attended, art galleries she visited, artpieces she had seen and been photographed with, the cipher – yet stellar for a layperson – would be within range of an experienced art critique. The only detail is that she, Stella, is an 8-year old Pomeranian Chihuahua cross (aka Pomawowow for short). With her owner Maeve Doyle, art critique and Gallery Director at Maddox Gallery, every day she delves into the best of modern art. Today we discover her story in the Office Dog Series

Stella the gallery dog at Maddox 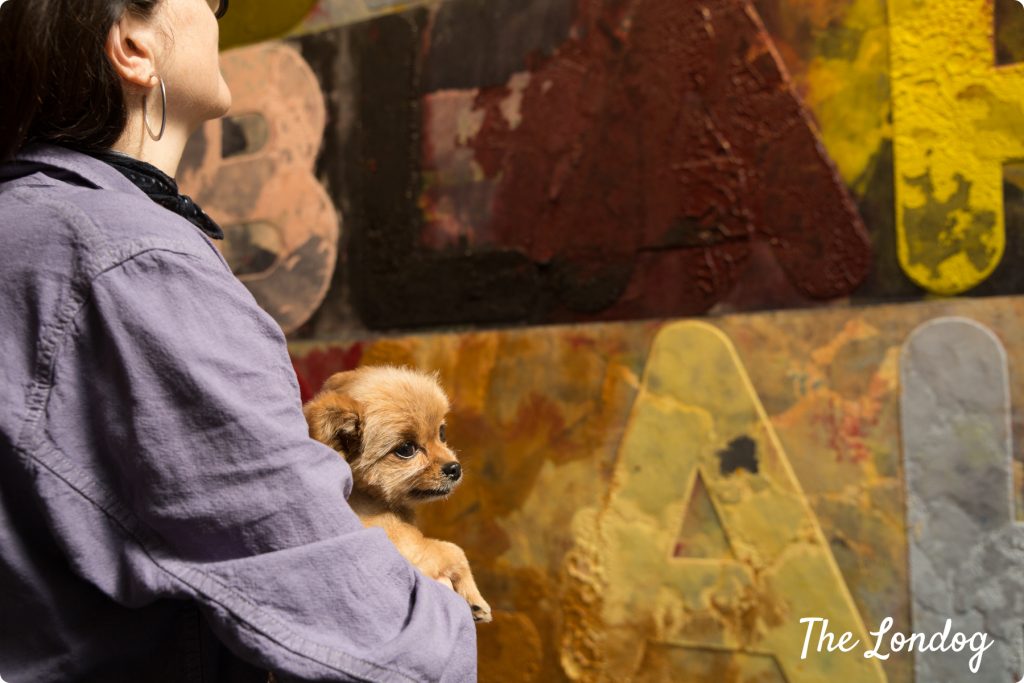 When I arrive at Maddox Art Gallery, on a sunny Saturday morning, turning off the chaos of Regent Street onto the quiet Maddox Street, I find the gallery’s entrance framed by a flowers cascade, as to marking the border between the rowdy and fast-paced world of the city and the quiet microcosm hiding behind it.

Maeve and Stella are on their way, and I find myself wondering among art pieces by Andy Warhol, Banksy, The Connor Brothers, David Yarrow and others on display at the gallery in the wait. As Maeve walks in, she lets Stella slide out of the black suede Vanessa Bruno bag she uses as a dog carrier, and Stella runs at full speed to say hi to gallerist Azuki, before getting back to her mum. In seconds the gallery microcosm gains a new star and equilibrium. 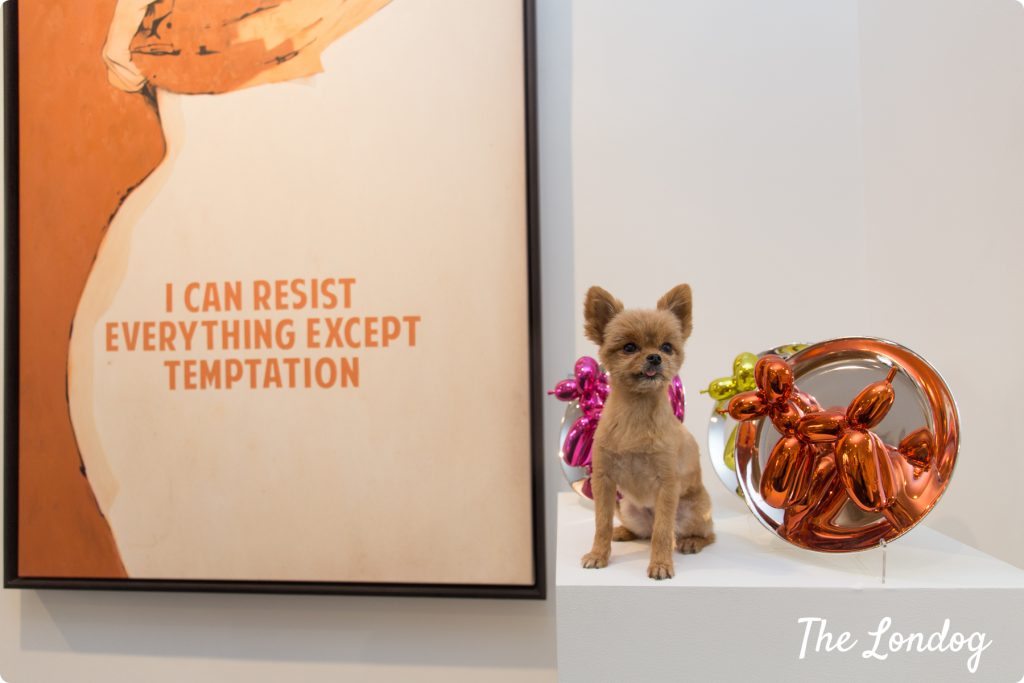 Stella is adorable and so tiny that she even fits in one of the big pockets of the blue A.P.C summer coat Maeve is wearing on the day. Maeve recounts that Stella and her brother Stanley left their litter in Ealing to be part of gallery life at Doyle Devere, 30 Ledbury Road W11, in 2010. It was only in 2017 that she started Stella’s Instagram profile, just as a test, as she says. If you love art and dogs, you should really check out her profile and have a sneak peek into her world.

Stella’s Instagram bio defines her as “Critic, Curator and Collector” (“demystifying art”), but don’t let this mislead you. “Stella does not have a role at the gallery, she is a pet, and her Instagram is not a complete picture: it’s a stylised version of her as an imagined critic, curator and collector – I’m a big fan of Aesop s fables and talking animals”, explains Maeve. 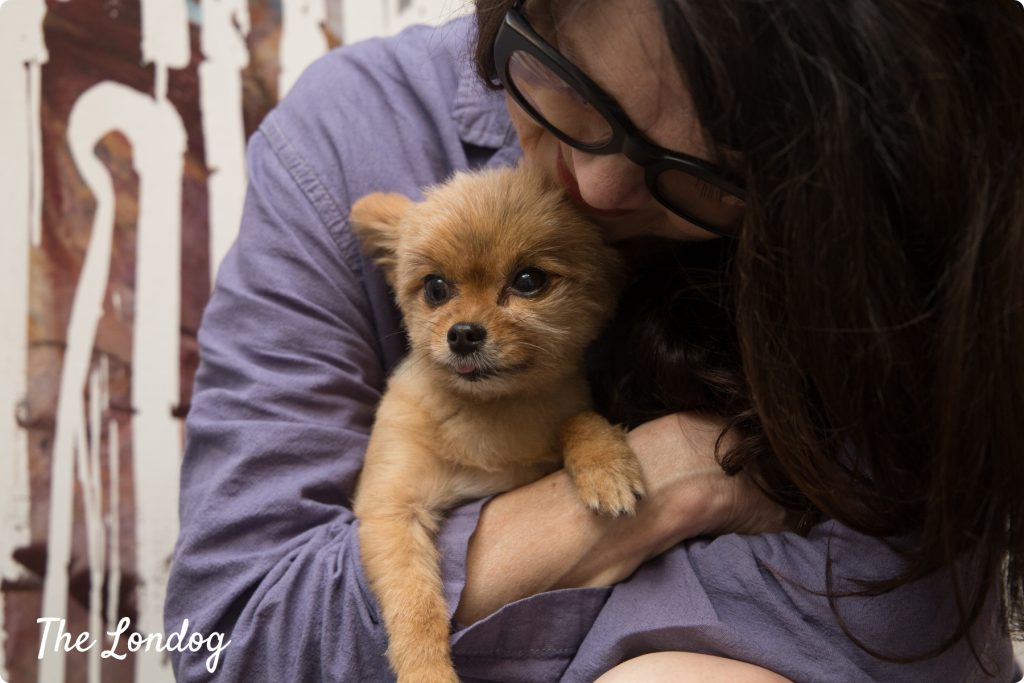 I had developed this romantic idea that, with her social media photos, Stella could have made art more accessible and easily readable for anyone, also drawing neophytes into the art world. But when I ask Maeve if this was her intention, she makes a point “I don’t know, collecting is about passion. You can’t make someone passionate”. This is probably true, although I personally find that sometimes new passions are born in the most unexpected ways.

Stella is also known for…

Loving: Food, she is completely food obsessed.
Being wary of: Children after having one or two bad experiences with twin boys.
Funniest habit: Jumping into handbags when she wants to rest.
Annoying habit: None

A gallery dog into the art world 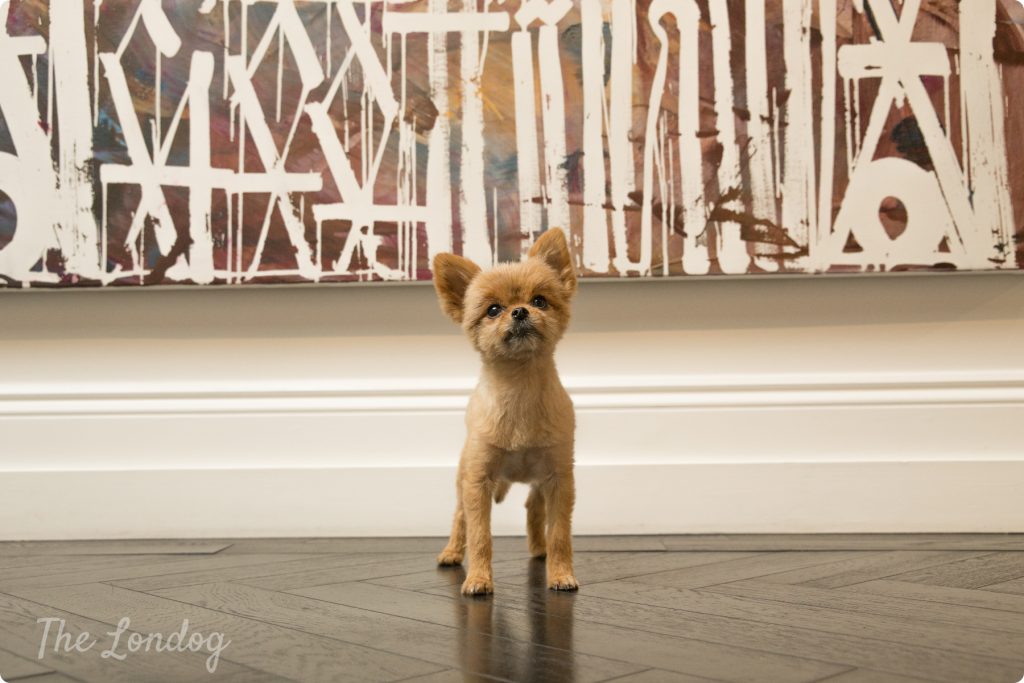 Hidden behind her thick-framed glasses, Maeve has some deep green eyes. Her passion about art transpires from every world she says as with talk with her and you end up wishing to spend the day around her, learning new things about the art world and being shown reality around under a different light. I ask Maeve what art movement would be Stella’s best match and she replies, “conceptual art with a nod to performance art”.

I get to spend the morning with Maeve in Mayfair, while Stella follows quietly our conversation and tour, always impeccably behaved, perching from her black leather bag as we walk down a sun-drenched street. “Stella has a very enthusiastic personality and is always willing to cooperate and assist at the gallery and events by greeting people and opening them up for casual conversation before talking about art, art works, prices and other serious stuff”, says Maeve.

I am soon given a fine example of how Stella brings people together when Maeve offers to visit Lazinc Sackville Gallery together, to see the Banksy: Greatest Hits 2002-2008 exhibition (awesome exhibition, unfortunately ended at the beginning of September). As we arrive at the gallery, a security guard, the gallery director and a clerk are all around Stella, and suddenly there are no roles, no uniforms, just a common ground for discussion. 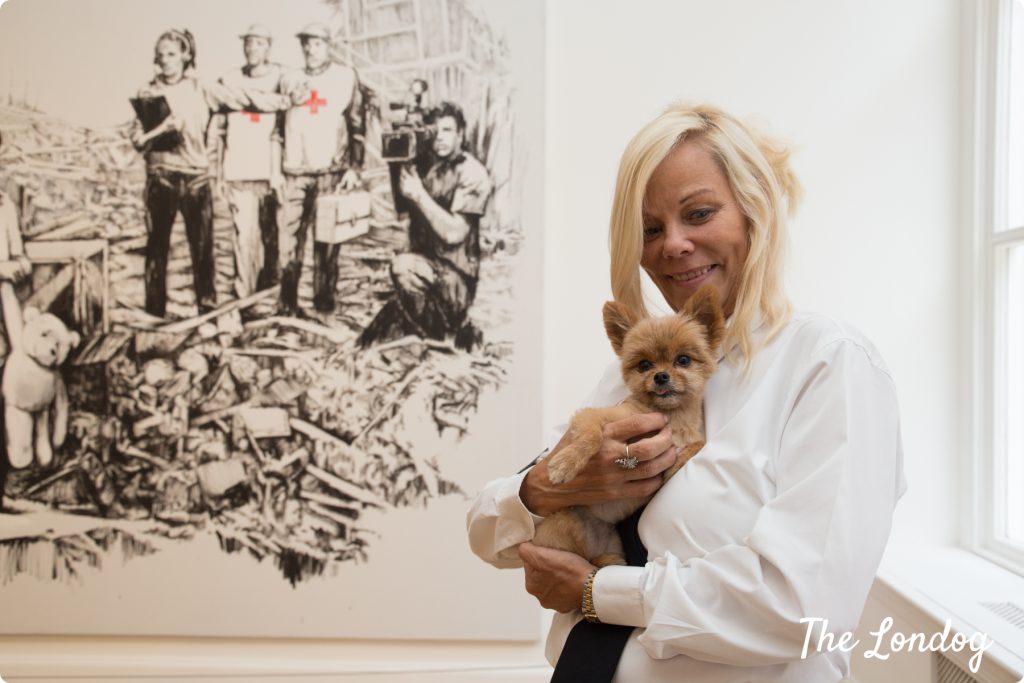 Stella and Maeve are always around, to breathe new art. “On a normal day we like to get a picture of Stella at an exhibition or with an artist – in a gallery, a studio visit, a private collection, street art. I’m always looking for an opportunity to see something new”, adds Maeve.

Stella isn’t unknown for having met famous people either. “Elton John walked up to Stella at Dover Street Market, he’s a big dog lover. The late Margaret Thatcher stopped to say hello in Holland Park… then there is Barbara Windsor, Victoria Beckham, Jake Chapman, Grayson Perry, and others”, recounts Maeve.

Together, Stella and Maeve make an inseparable couple and you could almost not picture them without each other. For sure Stella has adapted to and has been thriving in her gallery life. As Maeve says, key is “Let[ting] the dog decide if Gallery life is for them or not”. 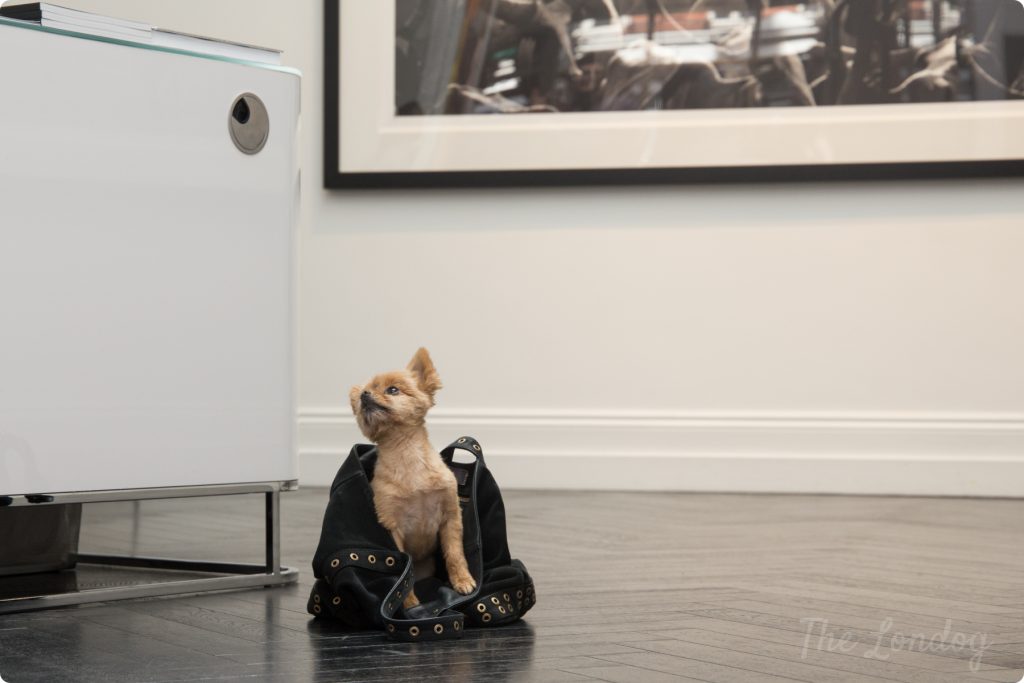