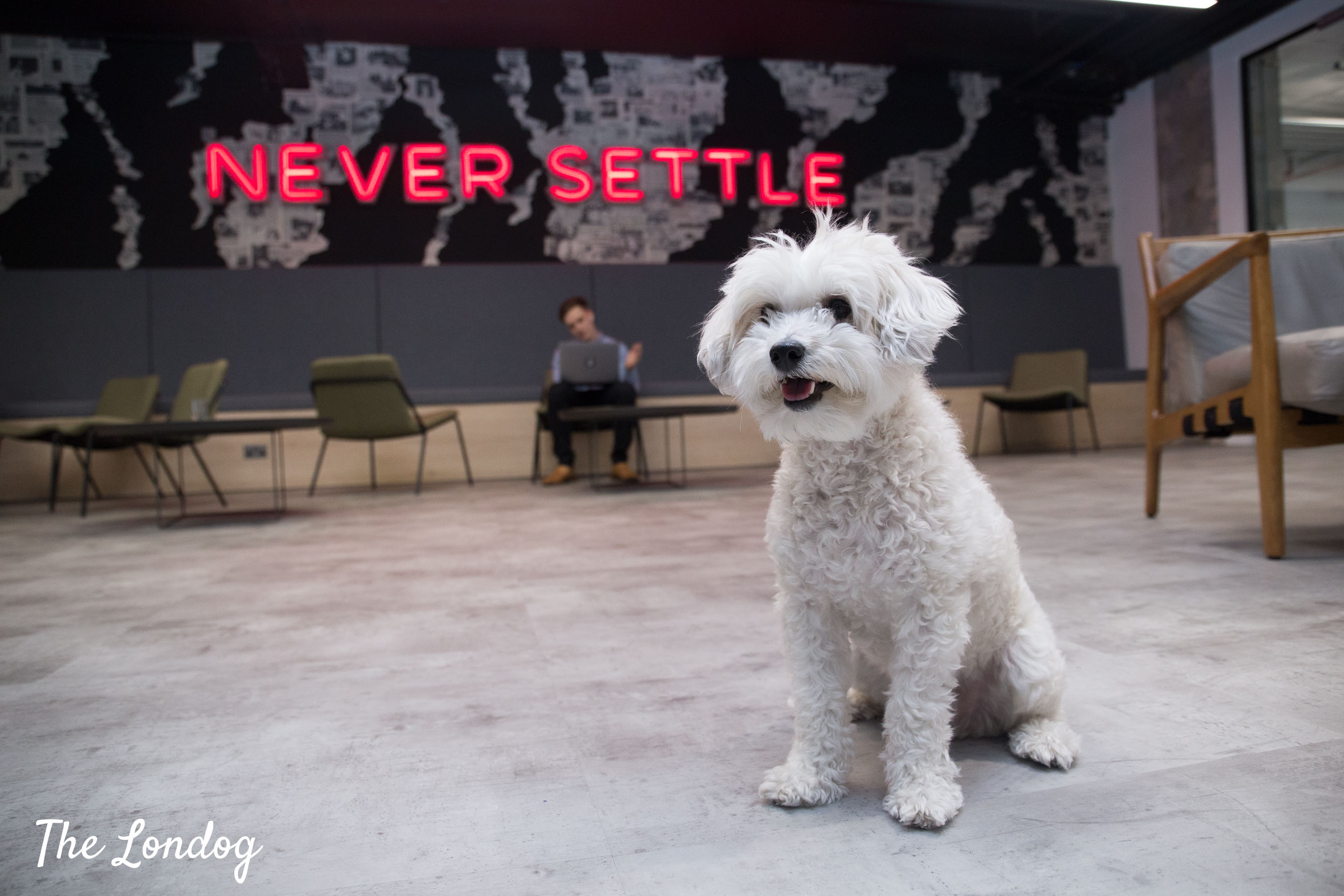 FinTech company Revolut takes on a large floor of Columbus Building, in Westferry. Steps from Canary Wharf, it is an area where on a working day you are likely to encounter crowds of men in dark suits and spot security guards and cameras monitoring activities, but not many dogs. A lucky exception would be Oscar, a little white Mexican-American rescue dog, making his way to work at Revolut with his human, Camille. Today his office dog story opens the 13th edition of the Office Dog Series. 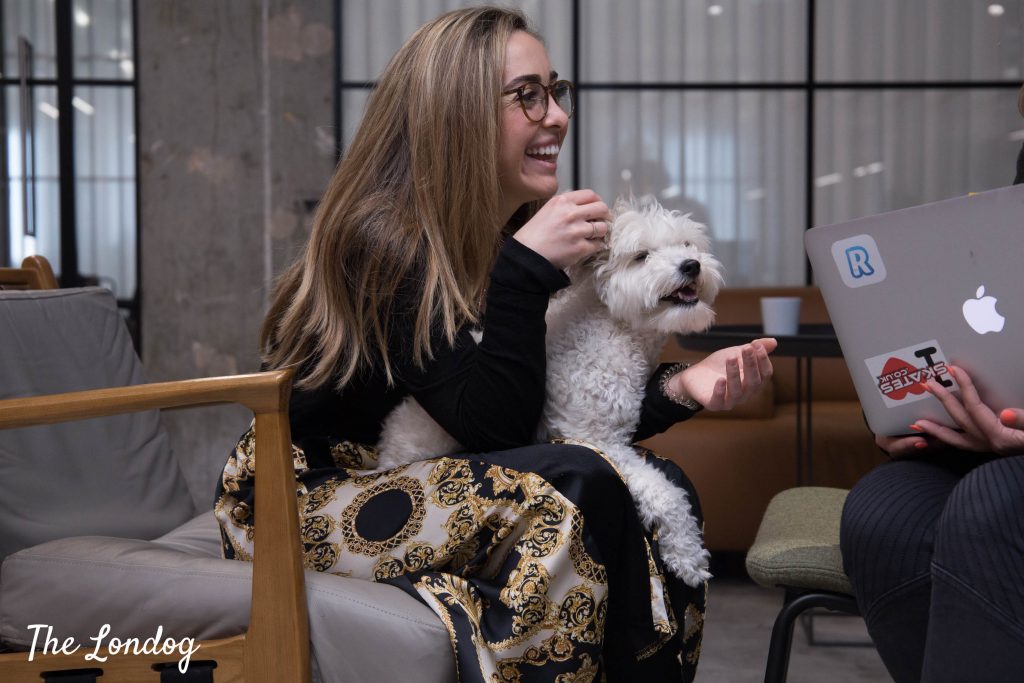 As I arrive at Revolut’s HQ, I realise that the atmosphere is very different from many traditional financial offices and the first impression walking through the door is that stereotypes about financial companies don’t apply here. The place is very different from certain financial industry standards, with dusty carpets, anonymous offices and rigid atmosphere which scream dull as soon as you walk into the door.

I walk into the communal area, after been greeted by a friendly receptionist, and in front of me opens a wide open space. A handful of Revoluters, mostly dressed up in casual attire, are having lunch. There is a moss decoration on a wall, a grey concrete-looking floor runs under the tables down to an area with sofas and armchairs with small tables far on the right. On the left, a glass wall with dark metal frames divides the area from the desk space. It’s a sleek office, with minimal furniture and natural light which filers from wide windows. 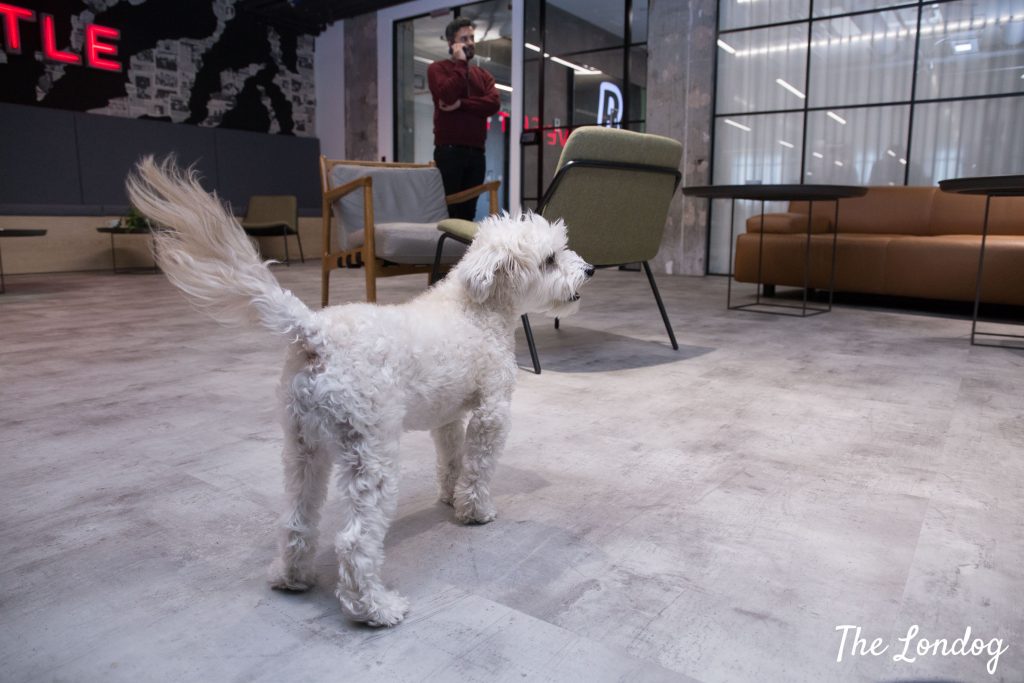 A cozy workspace, it seems. Revolut is a young FinTech company, after all. I am quite amazed to see that the debit card that I have in my wallet does come from a real company. As I get lost in my thoughts, a little white fluffy bullet suddenly flies across the room, to disappear soon after behind a column of concrete. Quiet. I wait. When the little white fully bullet reappears, it has now become a bunny, jumping with long strides. Here he slips under the tables where the Revoluters are chatting while they eat their take away pizza from the cardboard.

I kneel down on the floor and Little Oscar or Oscarcito – as he is referred to at times -, comes over for a cuddle. He rests his head on my laps and takes the time to stock up a good dose of strokes and scratches. When Camille arrives, Oscar has again disappeared somewhere over the glass wall, trotting with happy pace into a busy room with a neon sign reading “Bring your ‘A’ game”, where people are intent working on their computers. 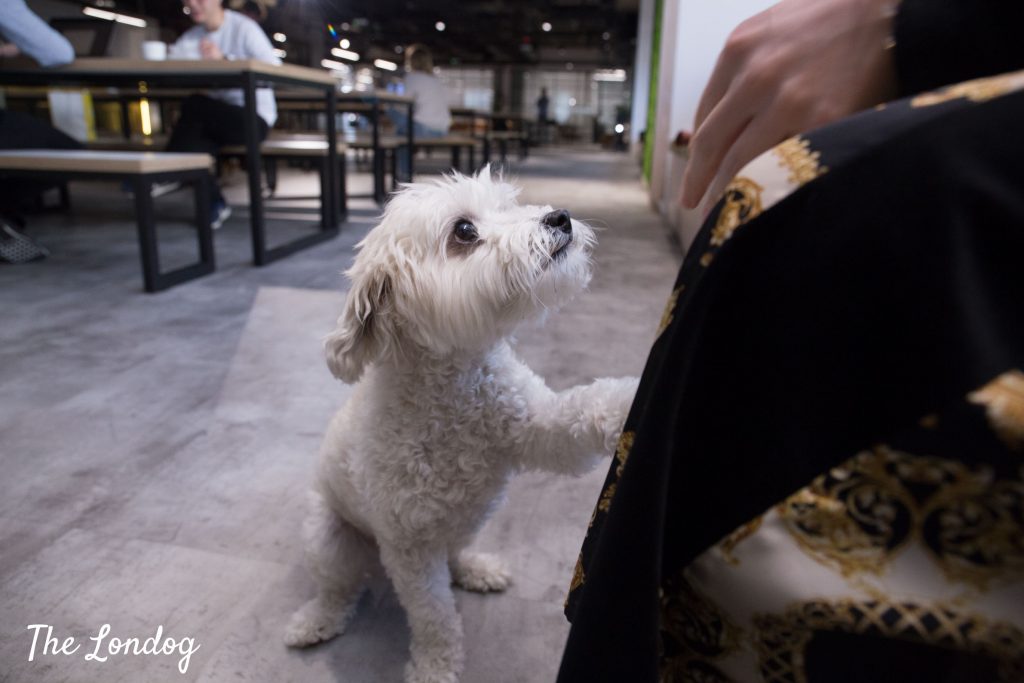 Oscar is a 4-year old poodle mix (probably a Bichon Cotton, says Camille), who was rescued on the streets of a border between Mexico and Texas with a bad skin condition. He was then cured in a shelter in Mexico for six months by an organisation called Amor Canino Piedras Negras before being brought to Austin, Texas in order to find him a forever home.

“I was not particularly looking for a dog but I happened to pass by the shelter that day,” recounts Camille. “I came in to play with dogs and stayed for an hour. On my way out, I saw Oscar coming into the shelter for the first time (he had just gotten off the wagon from the border) and decided I wanted to play with him for a few minutes or so before leaving. We played for 15-20 min and then before I could get up he put his paws on my lap for me to leave. I decided to adopt him at that moment. I have since moved from Texas to New York and now London and he has always been by my side. He is a well-travelled doggo.”

Oscar is also known for…

Loving: To nap – all the time – he is very lazy and loves belly rubs.
Hating: Motorcycles, they are so noisy!
Funniest habit: Finding his way in very tight spots so he always tries to squeeze himself in between two people sitting, for example. Also if you stop petting him for some reason he will look at you intensely until you start petting him again.
Most annoying habit: He chews his treats very loudly, but at least I know he enjoys them.
Most famous/infamous episode: We had a big office party last summer to celebrate our last round of funding. We had people fly in from other offices – Oscar was there, everybody was shocked to see him running around the party (it was one of the first few days he was coming) – and we had a wall of doughnuts and he ate all the doughnuts he could reach at the bottom of the wall. He wasn’t apologetic about it. 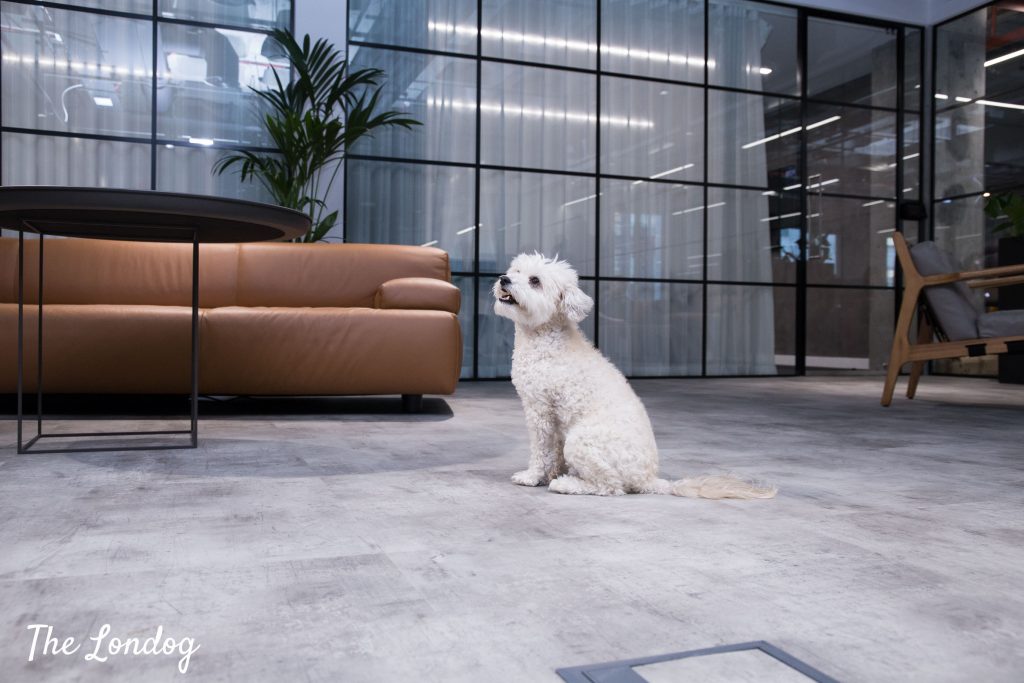 Oscar is a relatively new addition to the team. In fact, until June last year, Revolut used to be at a coworking space that didn’t allow dogs. Since their move, Revolut is a dog-friendly office and Oscar has been going to the office ever since. “Our new office was half empty when we moved in (ahead of our rapid expansion) so he had space to run around. Now the office is almost full and we are expanding to another floor,” says Camille. “Although we only have one other employee bringing his dog currently (called Peaches), I hope that in the future we will get more!”, she adds.

The only downside of their working day is probably their morning travel. “The commute is not the best. We take the tube for half an hour and it’s a bit crammed, but I put him in a tote bag and carry it on my shoulder so he doesn’t get walked on. Then as soon as we arrive at the office he is free to roam around and he gets so excited.”

At the office, a neon sign reading “Get Sh*t Done” reminds employees that hard work what drives Revolut. Having dogs at the office plays a role in alleviating stress, as studies have shown, and one can imagine that Oscar, with his happy face and funny laps around the office must elate many. 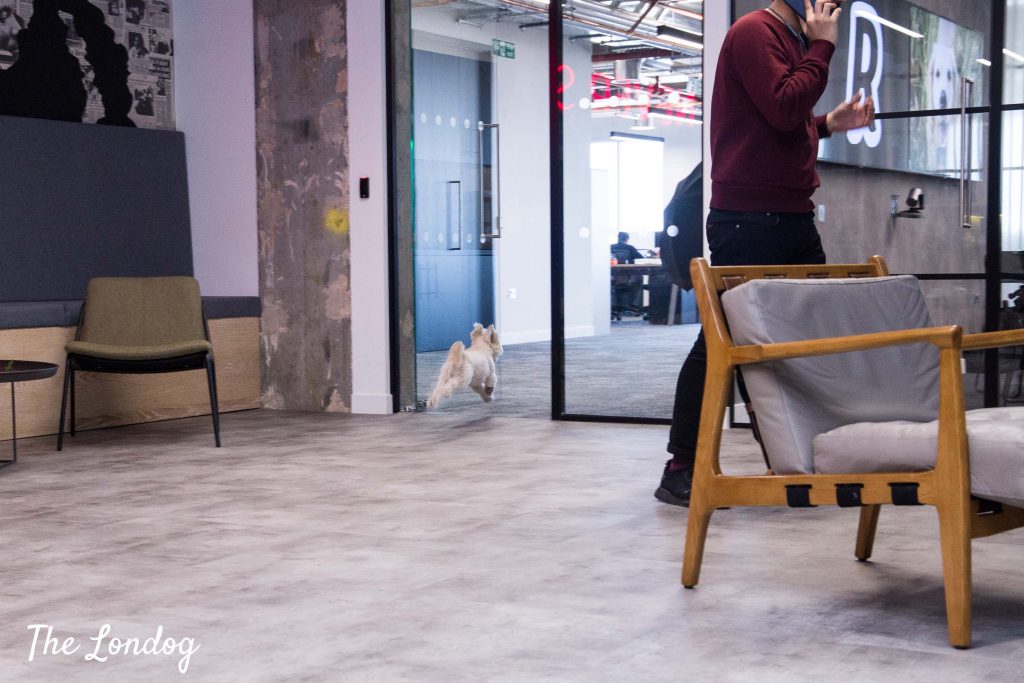 Asked about Oscar’s impact on the team, Camille notes, “I believe he makes everyone in the office genuinely happy and helps cope with some potentially stressful situations throughout the day. I see him sitting on a lot of big conference rooms with people during intense conversations so I believe he is there to help. We always joke around that he had to sign a Non-Disclosure Agreement because he has sat on a lot of important meetings.”

From what Camille tells me, I gather that it is not unusual for Oscar to run and roam around the office. “As soon as we get in, he gets so excited he starts by doing at least 2 – 3 big sprinting laps across the office,” she says. “He goes to say ‘Hi’ to all of his favourite people. A typical day for him consists of sitting on the laps of a bunch of people and being pet. Sometimes he disappears for hours and I don’t know where he is, only to find him chilling on the lap of a coworker on the other side of the office. One of my coworkers also surprised me one day and bought him a bed so he could sit next to my desk. He spends a lot of hours on the bed napping.”

As our meeting comes to an end, I say goodbye to Camille and as we part Oscar sets off to another office exploration. 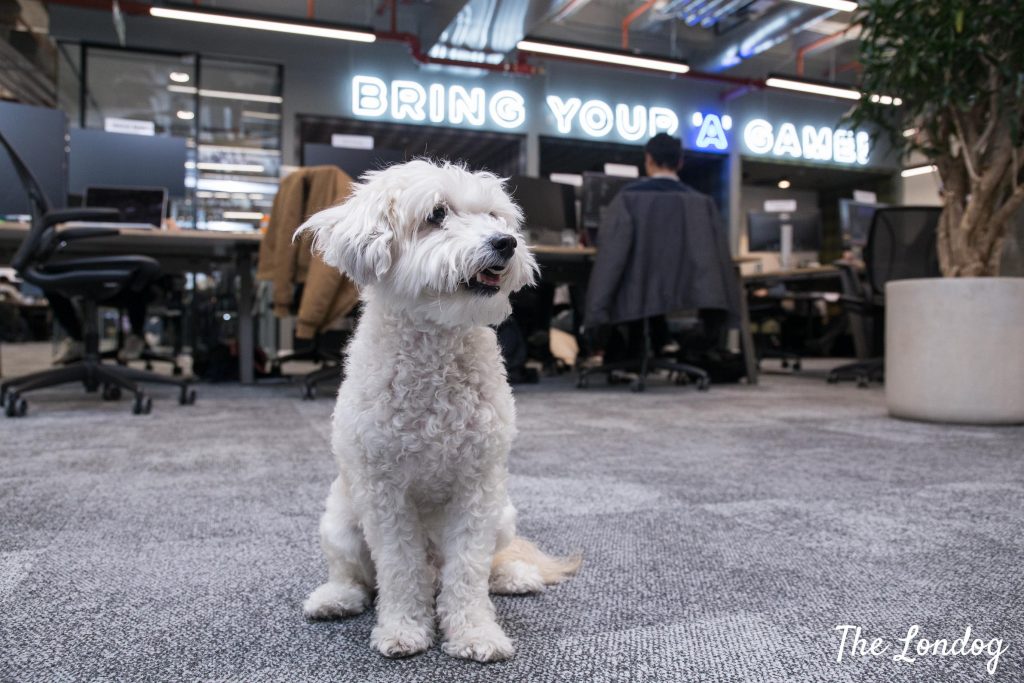