By The LondogSeptember 5, 2019No Comments 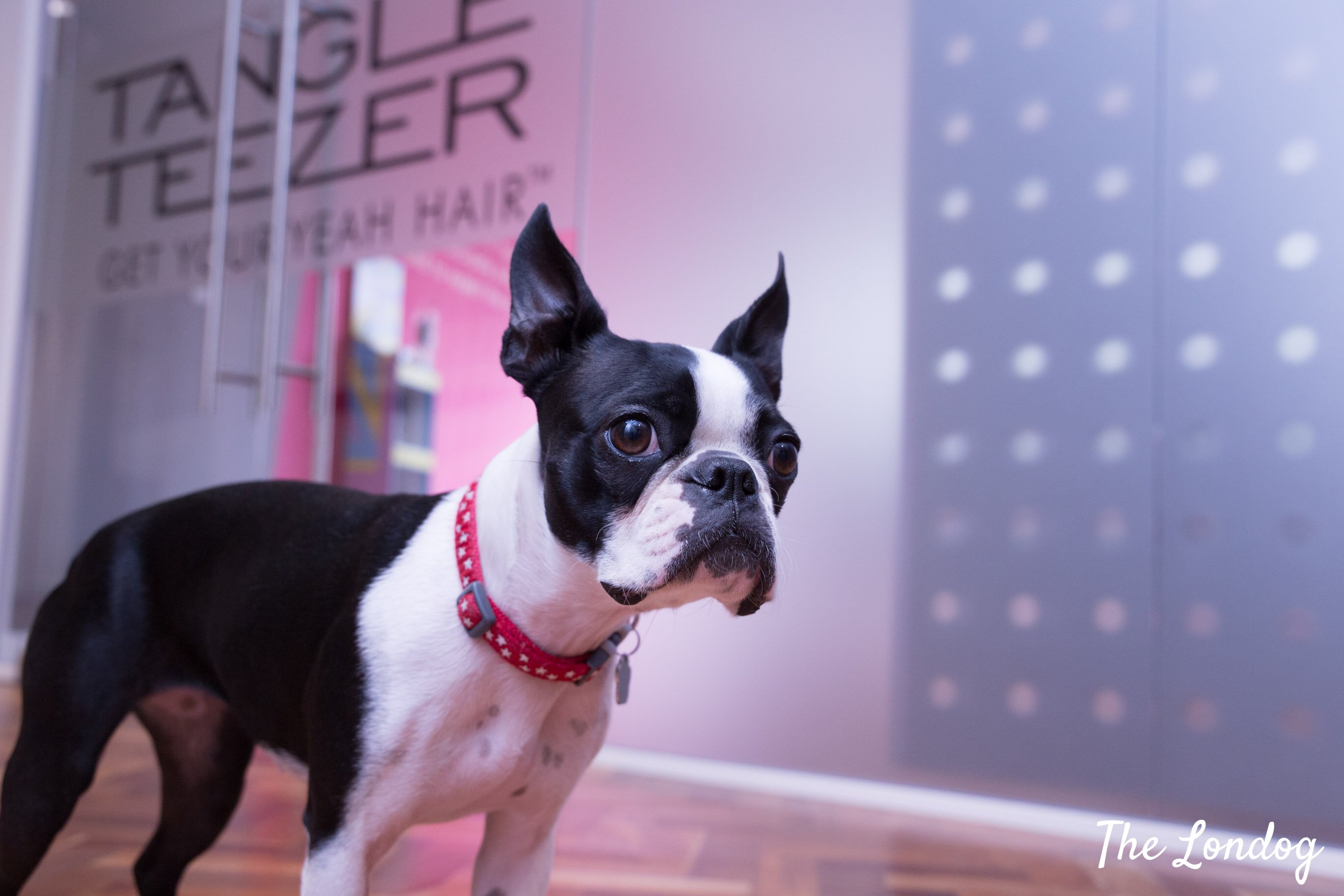 Two-year-old Boston Terrier Lucy is the office dog and mascot of dog brushes brand Pet Teezer* and world-famous detangling hairbrush brand Tangle Teezer. Every morning, Lucy is eager to walk in to their beautiful offices in vibrant Brixton, where her day begins. Today we tell you her story in the Office Dog Series. *This post is sponsored by Pet Teezer. 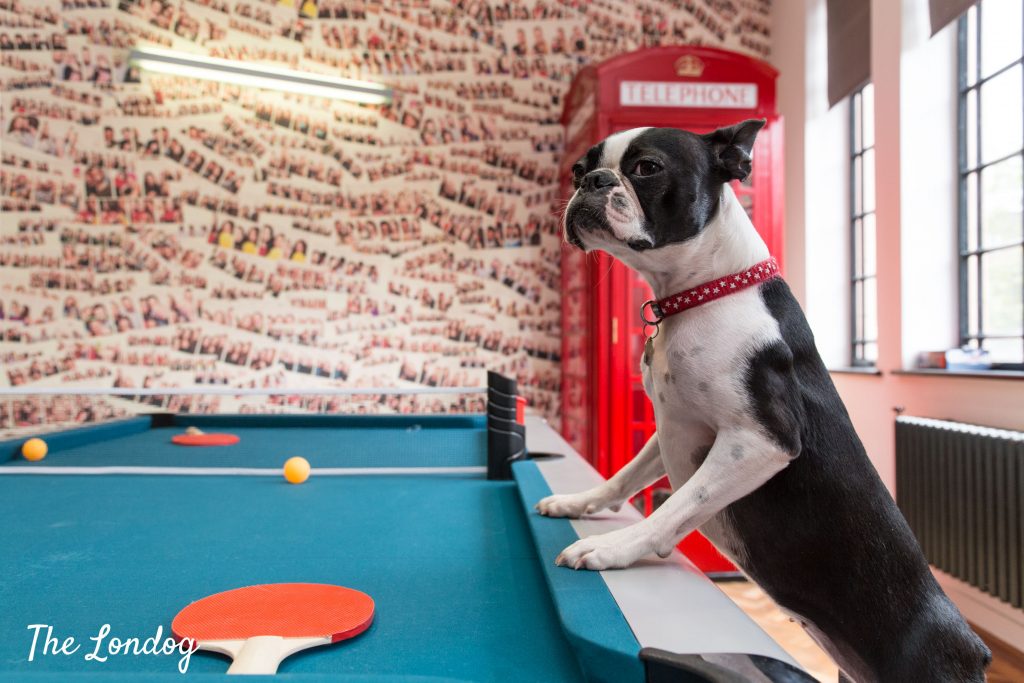 As I walk up the stairs, at Pet Teezer and Tangle Teezer’s office, I find a colourful luminescent sign reading “Last night a hairbrush saved my life”, and as soon as the door opens, I see Lucy, in her red collar with white little stars, her shiny coat and her shy disposition. Lucy is pet to Shaun, the founder & inventor of Tangle Teezer & Pet Teezer. He used to live in Boston in the US for many years, where he discovered his love for Boston Terriers and he has had two others prior to getting Lucy. Being the founder’s dog had the advantage that Lucy was destined to be an integral part of the team since she arrived as a puppy.

When Shaun is travelling, she stays with Lily, who I meet when I visit their offices and tells me all about her. “Lucy has a very independent personality and she is like no other dog. Often people in the office refer to her as a cat because of this: affection is always on her terms, so it feels pretty special when she randomly starts pawing at you from under your desk so she can sit on your lap. She’s always full of energy (except on a Monday morning when she’s had a busy weekend) and has a deep love for her small yellow tennis ball (she loves that ball more than any human) so expects all the staff to throw it for her all day. She doesn’t really take no for an answer – you could say she’s a bit of a diva.” 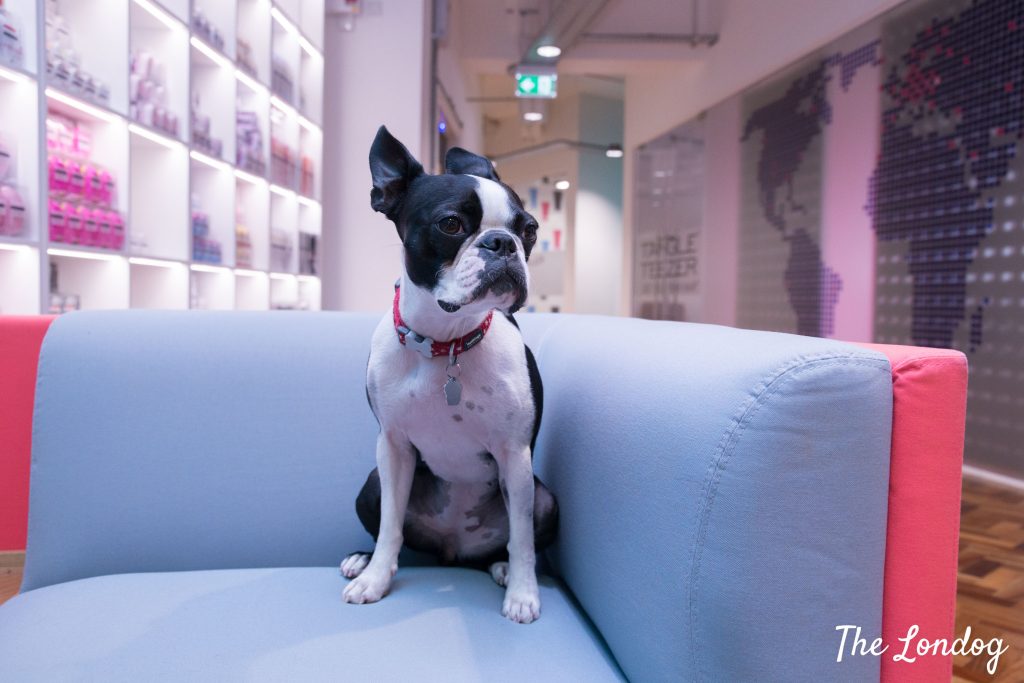 However it’s not that she doesn’t care. “She’s always excited to see everyone in the morning which brightens everyone’s day, especially if they’ve had a long and painful commute. She’s not the most affectionate dog, but she will let you come and pick her up for a cuddle so that really helps if you’re having a bad day. She has such a funny personality so she’s always making us laugh, or sometimes we all just want to cry over how cute she’s being!”

Lucy is also known for…

Loving: Her tennis ball and being scratched on the right side of her neck
Hating: Loud noises
Funniest habit: Pawing at your arm for some of your breakfast in the morning
Most annoying habit: Crying loudly when the ball gets stuck under a cupboard
Most infamous episode: When Sir Kevin the Chow Chow came to visit her at the office, which resulted in Lucy getting so excited that she peed in every place she could! 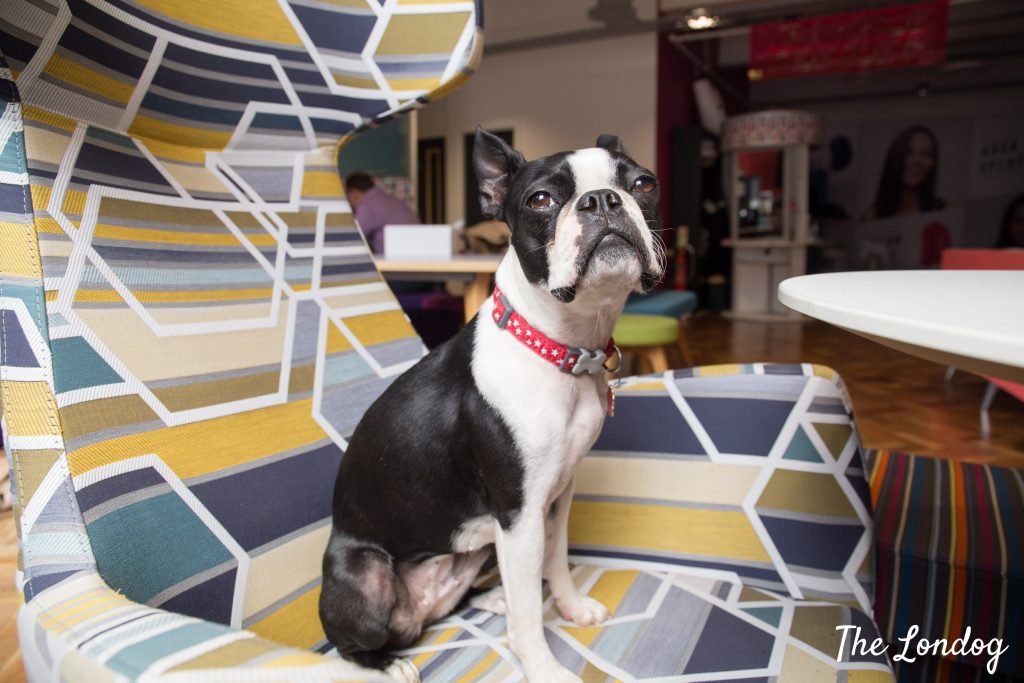 The office is like home for Lucy, and her brisk walk to work, in the morning, is the perfect start of the day. When she arrives at the office, she insists her lead is removed before walking up the stairs to the second floor, refusing to walk up the staircase if she’s still on her lead. “She then does her lap of honour up and down the office, to let everyone know she’s arrived – if you’re lucky she might even let you stroke her!” continues Lily. “She will then go round and cry at anyone who is eating their breakfast at their desk in the hope of someone sharing some with her, and once she’s failed at that, she will head into the kitchen for her own breakfast, which she tips out of the bowl and all over the floor and up the skirting boards – that’s how she likes to eat it!”

She has a Casper dog bed, which apparently is a big obsession of hers, and loves a morning nap after breakfast. “This is one of the only times in the day she’s quiet,” giggles Lily. “When she wakes up, she has a big stretch and starts charging around the office sniffing for her ball (it often gets hidden from her when the ball obsession gets out of hand). When she finally finds it, she will look for her first ‘victim’ of the day. She does this thing where she jumps up and places her two front paws on the desk and drops the ball beside your mouse, she then runs to the walkway in the office and waits for you to throw it to her, once she’s retrieved it then the above is repeated again and again and again and again! When she’s told no, she just moves down the office and finds someone else to play with her!” 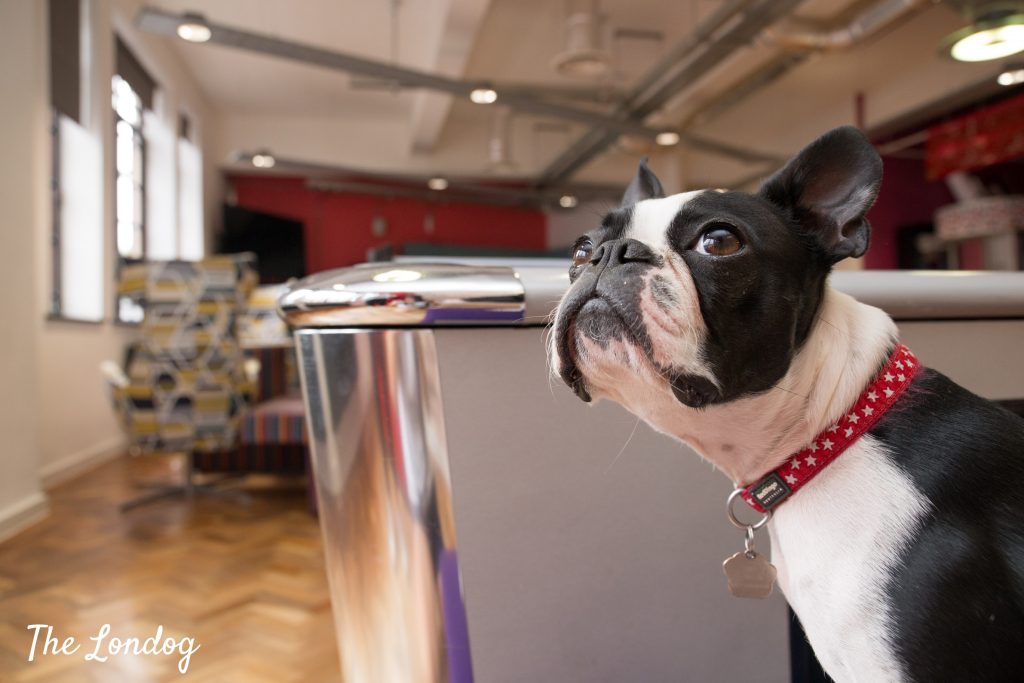 One could say that she likes helping her human colleagues to take a screen break! There is always time for walkies at lunch time, but she gets back to her favourite game and try and play with her ball until mid afternoon. “She used to come down to the first floor for lunch with everyone, but something must have spooked her recently as now she seems pretty petrified of the first floor and no one knows why. At around 3pm she gets into her Casper bed again for her afternoon nap until it’s home time.”

Unlike other dogs, her short coat does not need to be brushed, so she doesn’t need to visit the beauty bar on the first floor for a groom.

“Brixton is relatively dog friendly, Pop now allows dogs to come in until it gets dark, which is great for lunch and after work in the summer. The Duke of Edinburgh also allows dogs, inside and in the beer garden. Anywhere she goes she always gets lots of attention which she always plays up to – she can be such a flirt!” 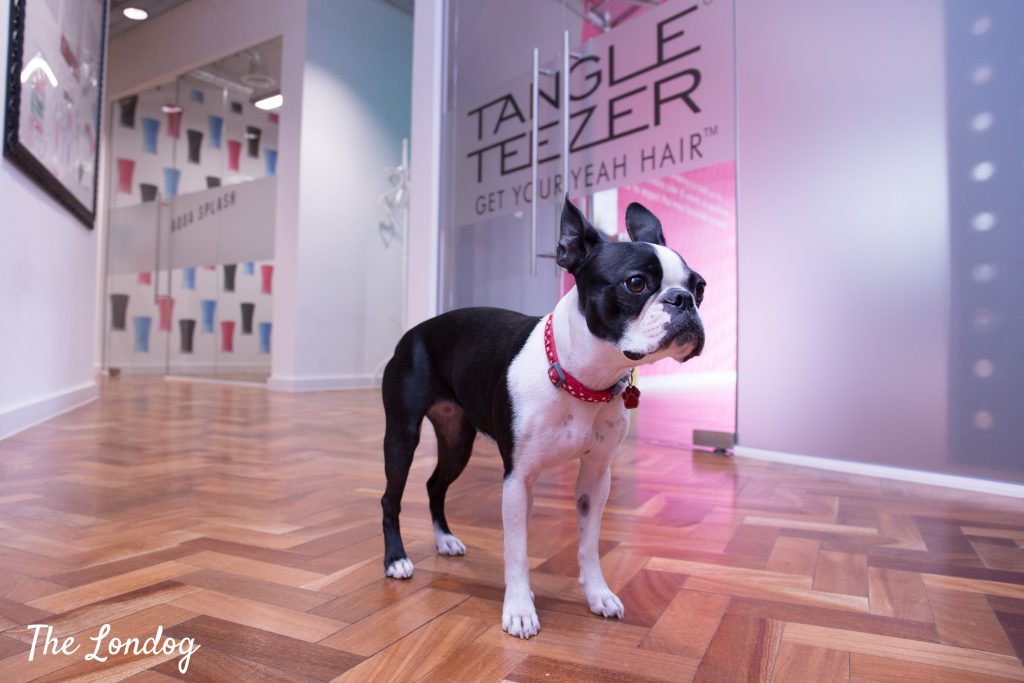 For a period of time, Lucy wasn’t the only dog at the office. “We used to have a pug who came into the office full time named Nala, she was actually here way before Lucy and was the most relaxed dog ever, so when Lucy came as a puppy it didn’t really phase her much – except when Lucy would nibble on her ears!” recounts Lily. “Nala left just over a year ago when her owner got a new job – we miss her so much!”

Nowadays, Pet Teezer and Tangle Teezer occasionally enjoy the presence of other dogs at the office, one being a huge Russian Mountain Dog called Dubu. “He is super relaxed so he lets Lucy annoy him for a while until she gets bored and finds her ball instead. Then there’s Ziggy who graces us with her presence from time to time, she’s a Cavapoochon who hates other dogs, but only when she’s inside (if she saw Lucy on the street or in the park, she would probably like her). When she comes in, Lucy knows to stay the other end of the office to save Ziggy snapping at her,” says Lily. 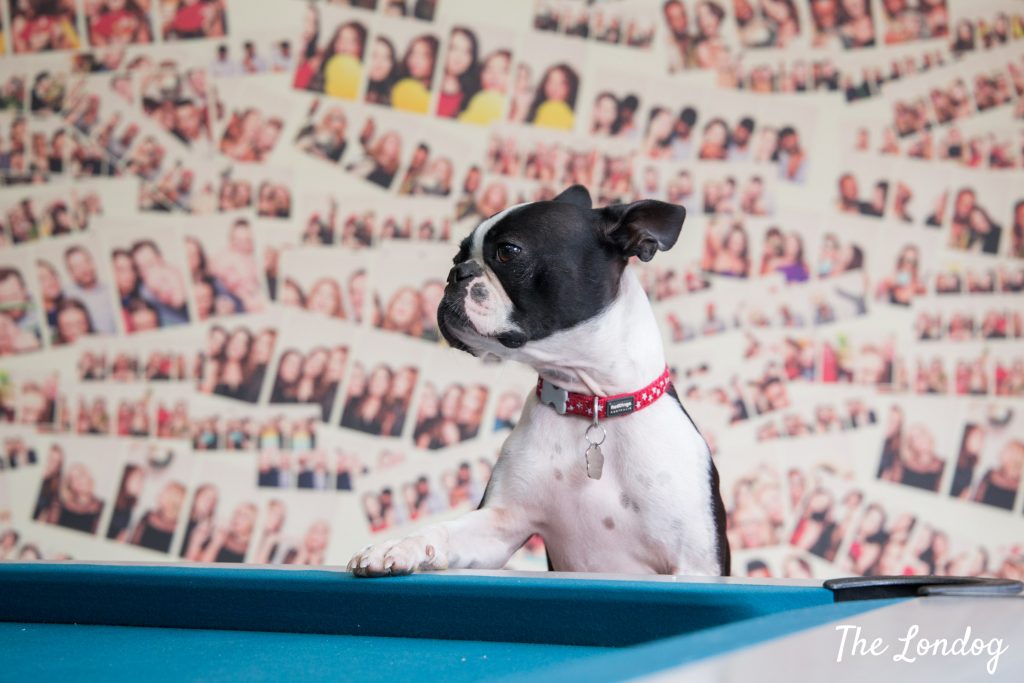 As it can sound natural for a business which has a pet brand, Pet Teezer’s office is very dog-friendly. Lily explains, “Staff members are always allowed to bring their dogs in when they want. Not many of the staff here do have dogs, [so] it’s mostly when they’re dog sitting for friends that they bring them in. The office has been dog-friendly for over 5 years now, and would have been for even longer if there was anyone that needed to bring a dog in.”

“Lucy definitely creates conversation and gives you something to bond over, and it’s nice for new members of staff to feel like they’ve already found a friend in her when they’ve just joined and feel a bit nervous,” says Lily. In general, the atmosphere is very welcoming with dogs. “We have absolutely no dog rules in our office, Lucy basically does what she pleases which is probably the best way to be,” she continues. “We have a very relaxed environment, you should see one of the walls in the office that used to be white, it’s now a very off white / brown from Lucy’s tennis ball hitting it – you can tell we’re not precious!” 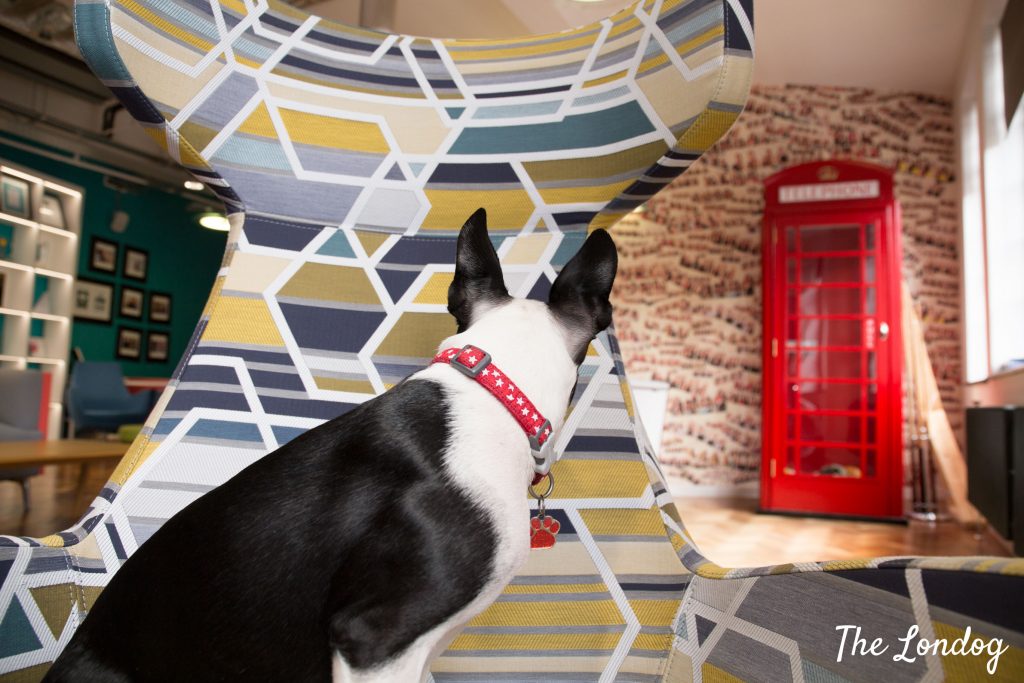 Chatting with Lily about the benefits of dog-friendly office policies, she notes, “I think all offices should adopt dog friendly policies if they can. If you’re an animal person then you’ll understand the sheer joy that pets can bring, and honestly there’s nothing nicer than seeing her little face underneath your desk with her beady eyes staring up at you for attention. It also has a really calming effect too, if you’re in a bad mood and just need a breather, there’s nothing better than stealing Lucy out of her bed and cradling her like a baby for five minutes – it’s almost therapeutic!”

Her tips for the best office dog experience? 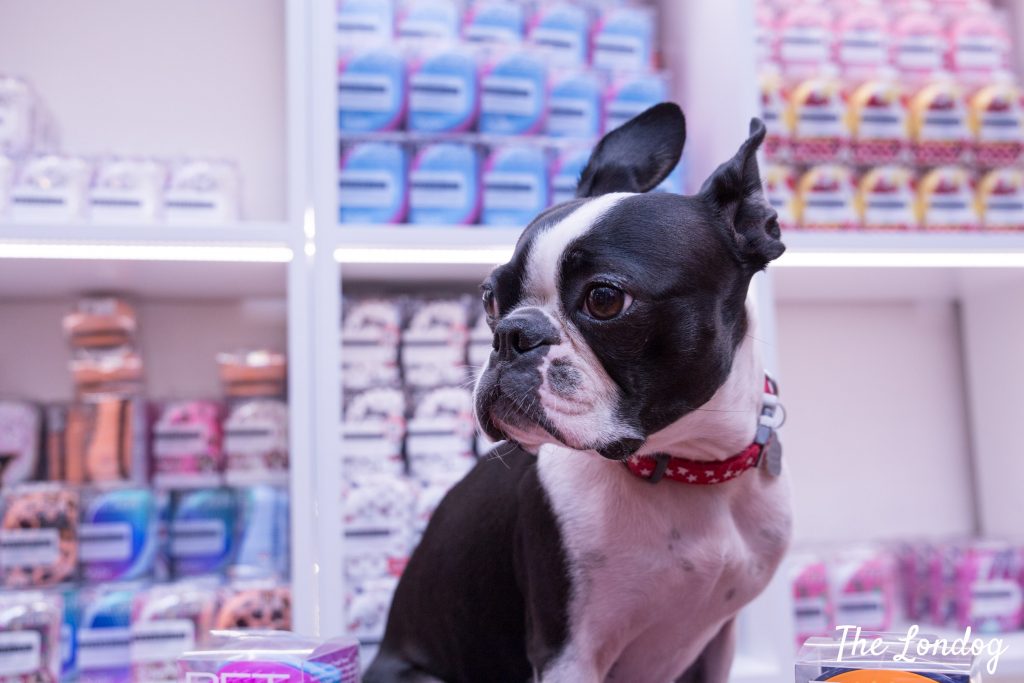 About Pet Teezers: Pet Teezer launched in 2018 from the makers of the world-famous detangling hairbrush brand, Tangle Teezer, to provide brushes for dogs. After their launch, Pet Teezer had gifted us a pair of Detangling & De-Shedding Dog Grooming Brushes to try on Argo and we wrote about the trial in this independent review. The brushes were recently released also in a small size.