By The LondogDecember 4, 2019No Comments 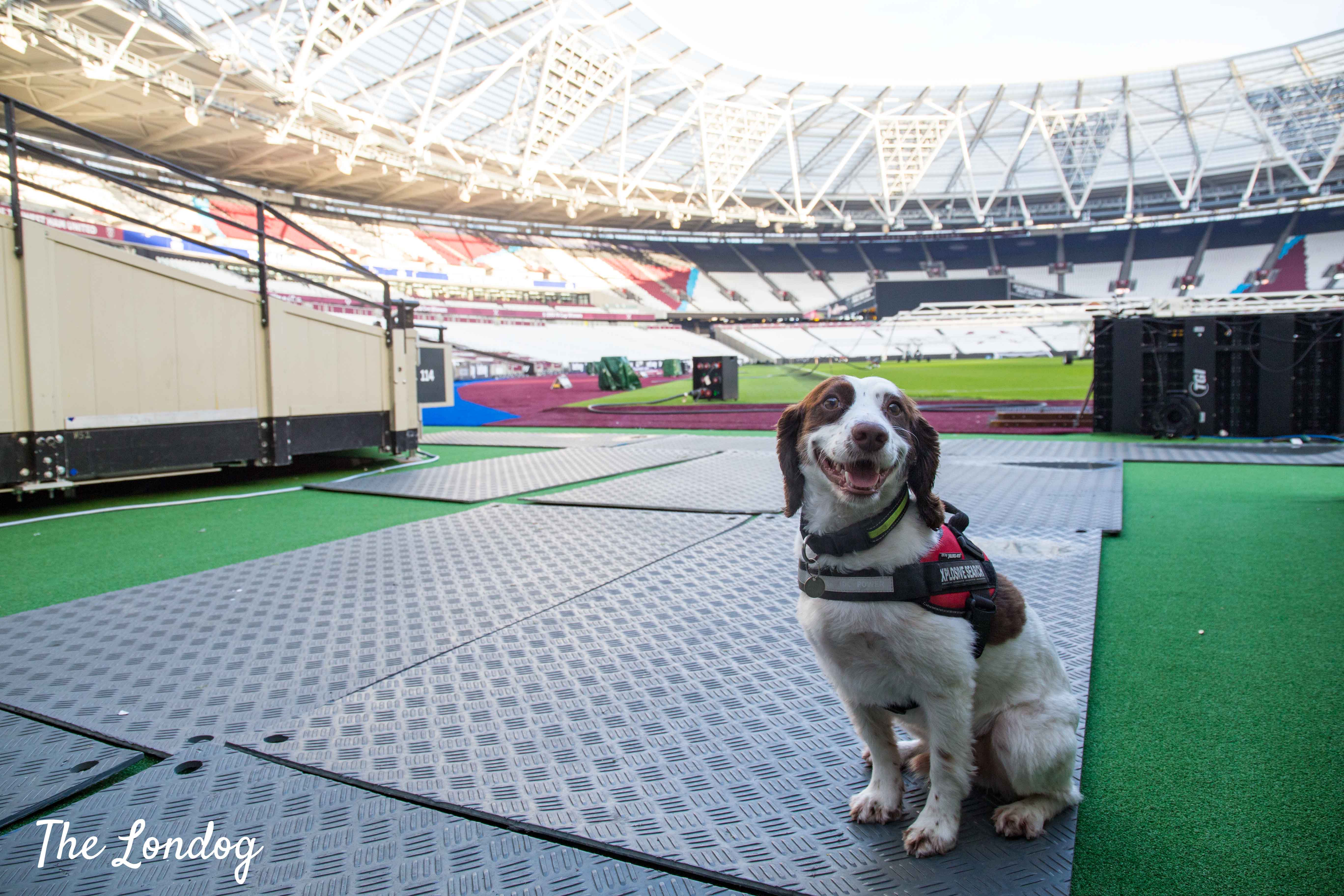 Dogs at work may entail something very different from the office (or studio/store/gym/etc) dog life you find usually featured in the Office Dog Series. In fact, there are dogs who are trained to work together with their handlers, lending their skills for a greater purpose. This is the case of explosive and narcotics search and detection dogs of private company Tyler Security, who are employed with their former police officers handlers to keep people safe at large events such as football games, or sensitive areas like some buildings in the City of London. 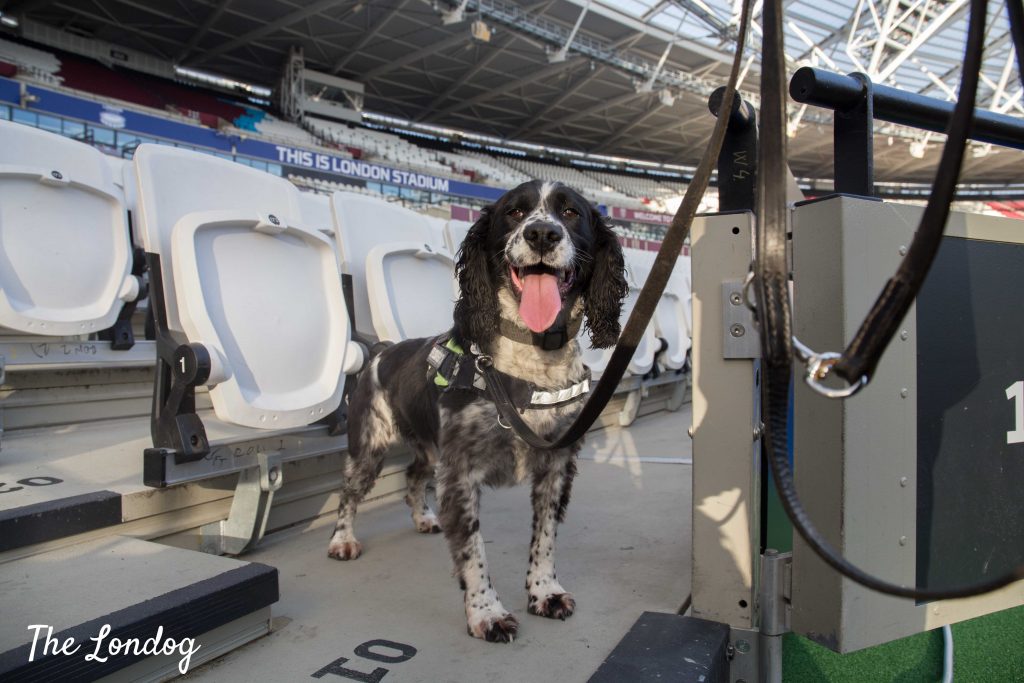 7 am. As I walk on the foot bridge to cross the river Lea, my breathe draws white swirls before disappearing in the mist of the morning. The pavements are desert around the Olympic Stadium. It is a chilly morning, just after the change of hour, which makes the early rise more bearable for who, like me, isn’t used to getting up before dawn.

The city is quiet and as I do a lap around the stadium looking for an open gate, I don’t meet a soul. It is so quiet that I start questioning if it is the right time and day, before spotting some cars parked one level down. Orderly spaced, all boots open, dog crates in view. Bingo.

As I pass the security controls I win a green bracelet pass and so does my bag. Rowland, a big guy with a firm handshake and a friendly smile comes and greets me. He is the director of Tyler Security, a private security company specialised in explosives and narcotics search and detection that was formed 12 years ago by retired police officers. Its ranks are filled by former police officers, mainly police dog handlers, with roughly 30 years of police experience per head and 30 search dogs. Today is the first of a 4-day workshop at the West Ham stadium, where the dogs will go through various training sessions and tests. 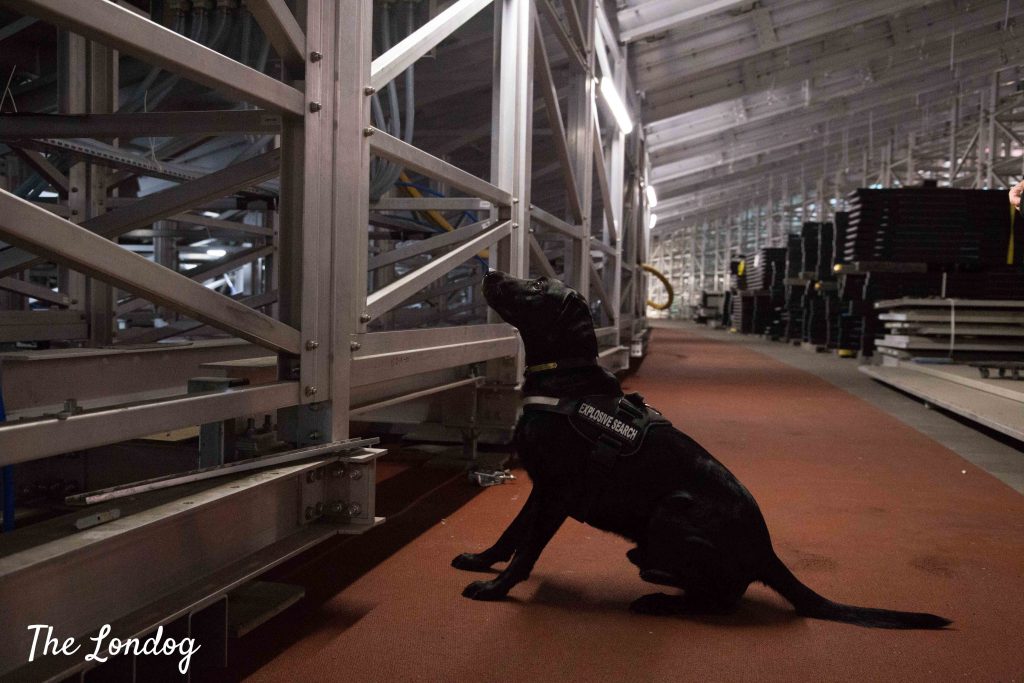 We walk into a warm room, where we join two colleagues of Rowland. They are sitting at a table, all wearing remembrance poppies, and we start chatting about dogs. They tell me about what their four-legged co-workers get up to, how they are prepared, what their days look like and what venues do they normally patrol. For instance, they tell me that the dogs are trained not to respond to food, they explain, as in many situations they will be required to work in presence of those distractions. When searching VIP areas, food may have been spilled on the floor and obviously they don’t want them to go on the hunt for the crumbles, so toys are normally used as a reward instead.

Rowland explains that what makes their company unique is that the team is entirely made up of retired police officers, who have great “situational awareness” due to their experience and complement the dogs’ skills when the need arises to deal with difficult situations. 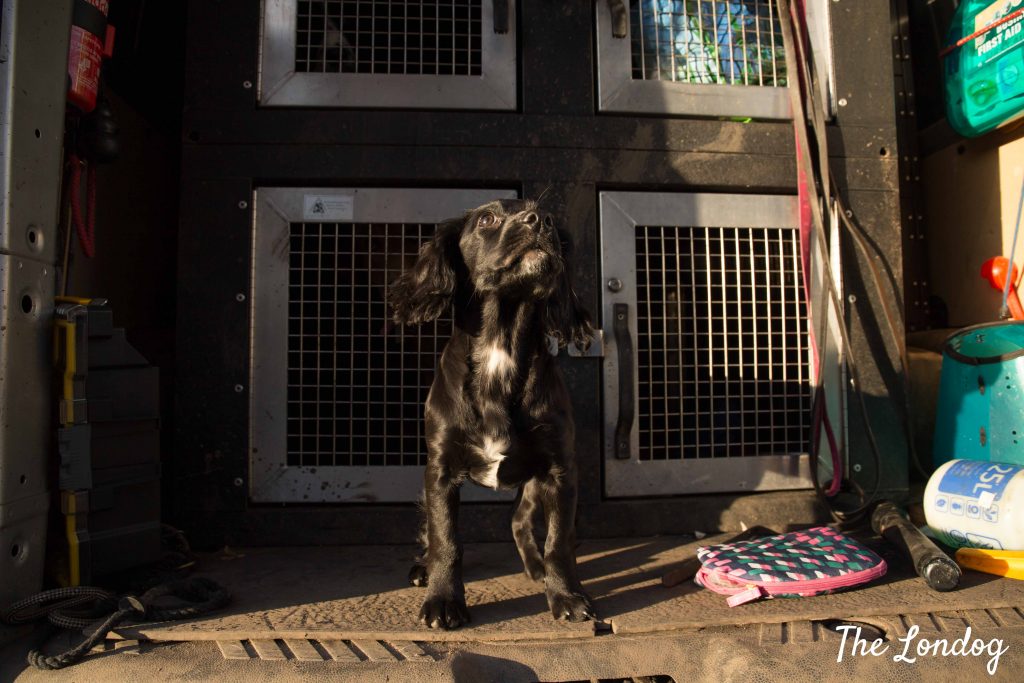 Differently from police dogs, who normally stay in central kennels overnight, Tyler Security’s canines go home with their handlers at the end of their working day. They are part of the family and some of them enjoy the comfort of living indoors too. Rowland notes that you can tell the difference this makes in the bond between dog and handler. I am surprised when he recounts that not all of their dogs have joined as puppies; instead, some became search dogs after being rehomed from rescue centres or families that had unrealistic expectations about life with a working dog.

They train hard, mostly at venues they work at, such as stadiums and other events venues. On a typical working day, the dogs would clear high-profile areas, carrying out what they call ‘defensive searches’ in potentially vulnerable spaces, and they may as well clear packages and anything that looks suspicious. They are also employed as a static point of visibility, acting as reassuring presence. 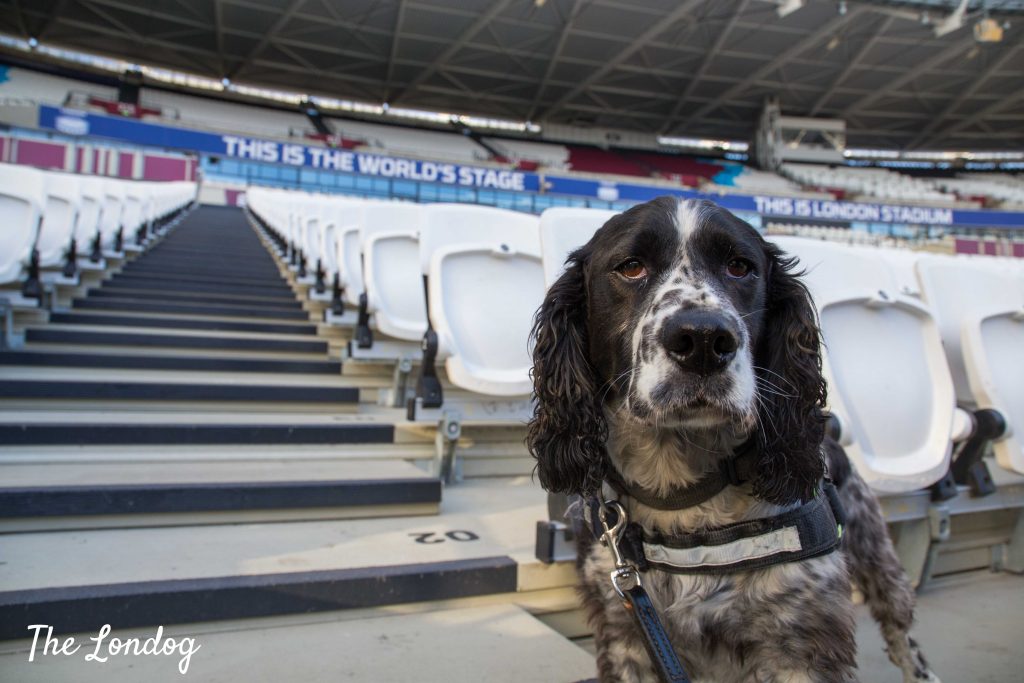 Time comes to meet the dogs and see them at work. Typical working dogs employed by Tyler Security are from the gun dog breeds: Spaniels (Cocker, Springer and Sprocker) and Labradors mostly, although they tell me there is a Pointer too. Spaniels and Labradors have very different characters and sensitivities.

One by one, the dogs are taken under the bleachers where the first training session starts. The trainer has hidden different types of explosive scents among the metal beams. One at a time, the handlers are told where the explosives are and they ask their dog to search. The dogs’ harness acts as a trigger, and you can see them getting excited for the work to come as soon as it’s fitted. 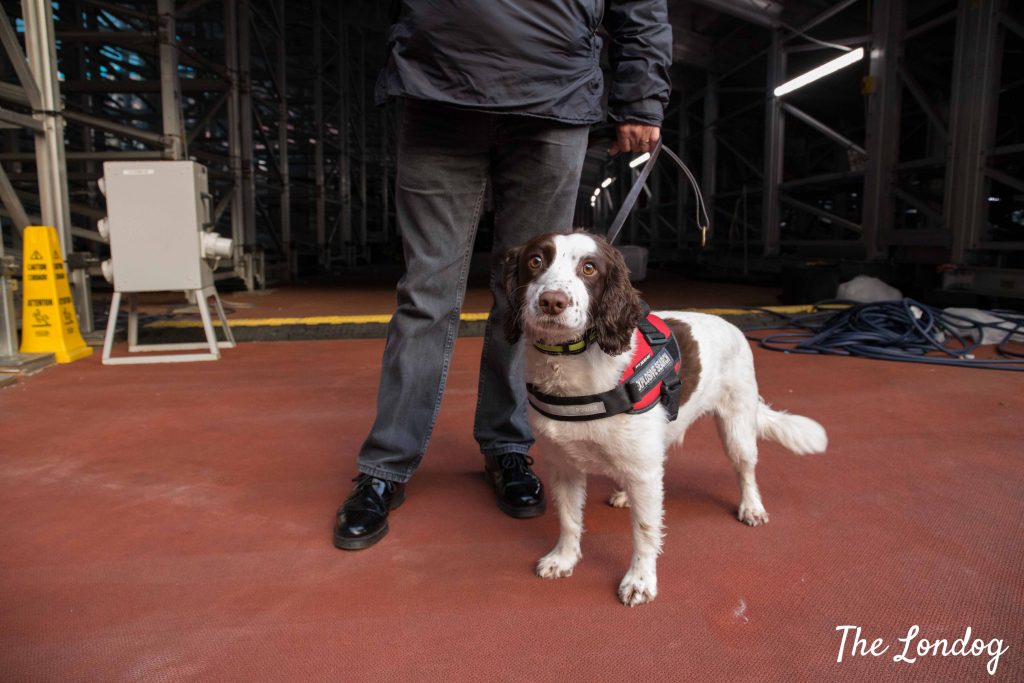 We walk to the parking lot to see who is up for a training round. Rowland has three dogs in his car. He introduces me to his 3-month old black Cocker Spaniel, Daisy, who is already on her path to become a search dog. As he lets her out, she curls up for a cuddle between my feet. Cute. She already responds to her name as Rowland calls her, and proudly retrieves her miniature red Kong toy.

A Sprocker Spaniel is the first to go. All the Spaniels I watch roam up and down under the bleachers sniffing around, while the Labrador who has a go next is less frantic in his search, but all of them wag their tails content. They indicate when they find the explosive scent and wait for their reward. Some of them are so excited for the prize to come that they anticipate it by turning their head towards their handler who they know will dispense their bounty. They are soon rewarded when they focus on the indication: their handler throws the toy close to the scent point and the dog shoots off proudly carrying their toy. 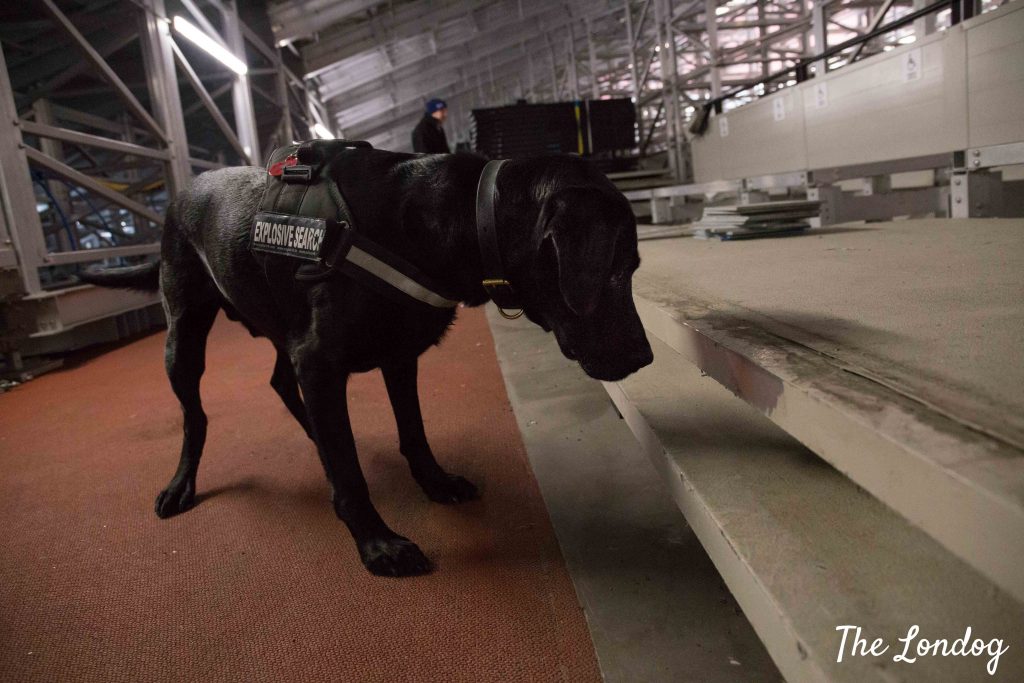 The trainer explains that this is just the warming up round, the one serving to remind the dogs about different explosive scents, and that the following sessions will take place around the stadium, without the handlers knowing where the scents are hidden.

I am told that, on a working task, dogs are normally given a break after 40 minutes to prevent nose fatigue, while on static tasks they normally work for an hour before being given a break, where they can chill out. Some breeds, like Spaniels, don’t really switch off, though. One of their working tasks was clearing Wembley Stadium for which they used 24 dogs, a mammoth task!

I find it incredibly fascinating to hear their stories and watch the dogs working and I’d love to stay for the whole day, but unfortunately it’s time to say goodbye. As I leave the stadium to get on a ram packed Central Line from Stratford station to get back to Central London, I can’t stop thinking about those dogs’ working day and how rewarding it must be to work in such synergy with a canine partner. Perhaps in another life that will be my vocation.

If you are intrigued by stories of working dogs, you may also enjoy the story of search and rescue dogs in our interview with Amish MacInnes, the founder of the UK Search and Rescue Dog Association (SARDA).