By The LondogSeptember 6, 2019No Comments 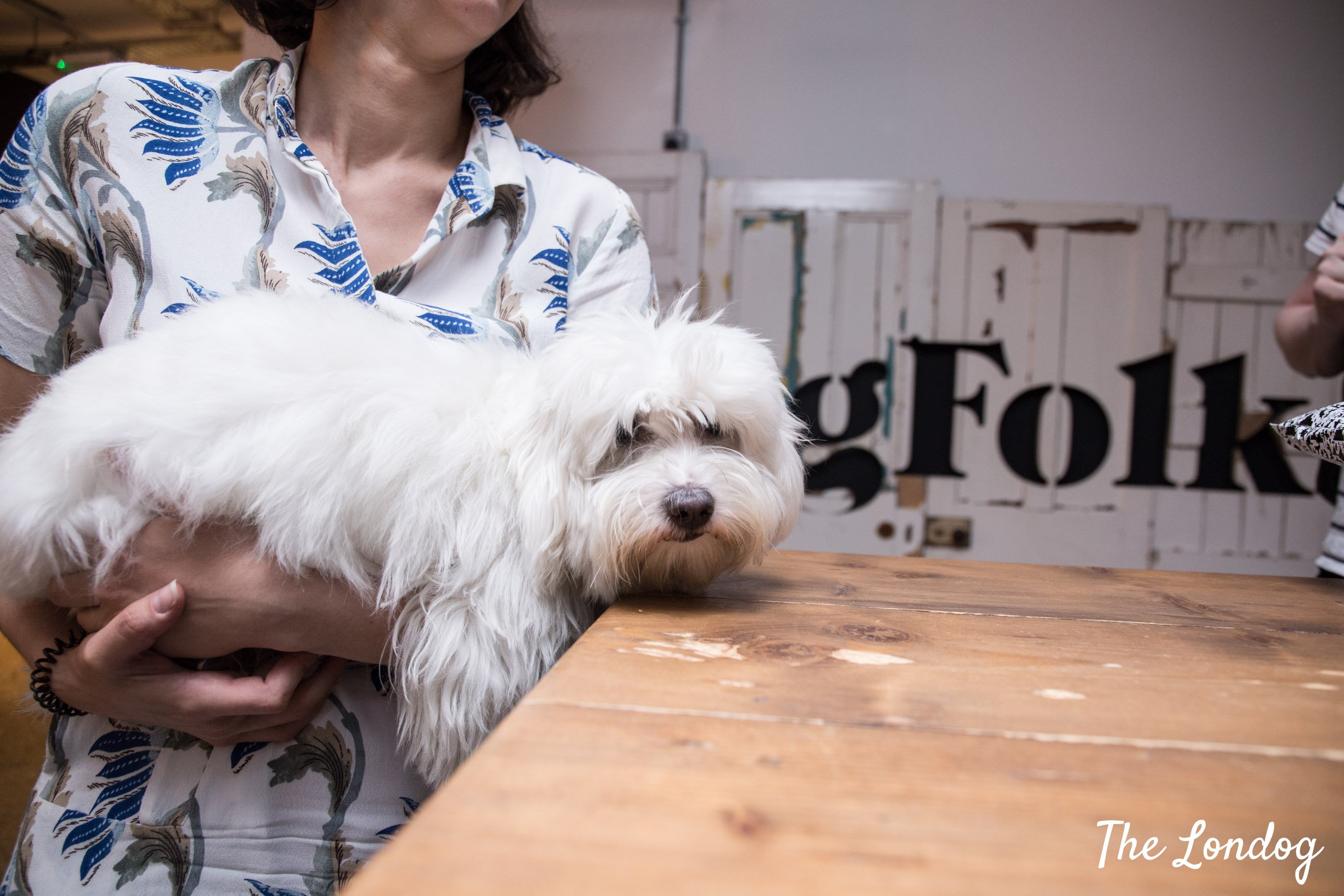 Bobby is a 10-month old Coton de Tulear puppy; think white, warm, small cotton-fluff creature. It is not by chance that her Instagram handle is named Bobbert Fluffypants III. Bobby is also lucky to enjoy the life of an office dog at global creative agency AnalogFolk with her human Kimberly. Her story, today, concludes this 14th edition of the Office Dog Series. 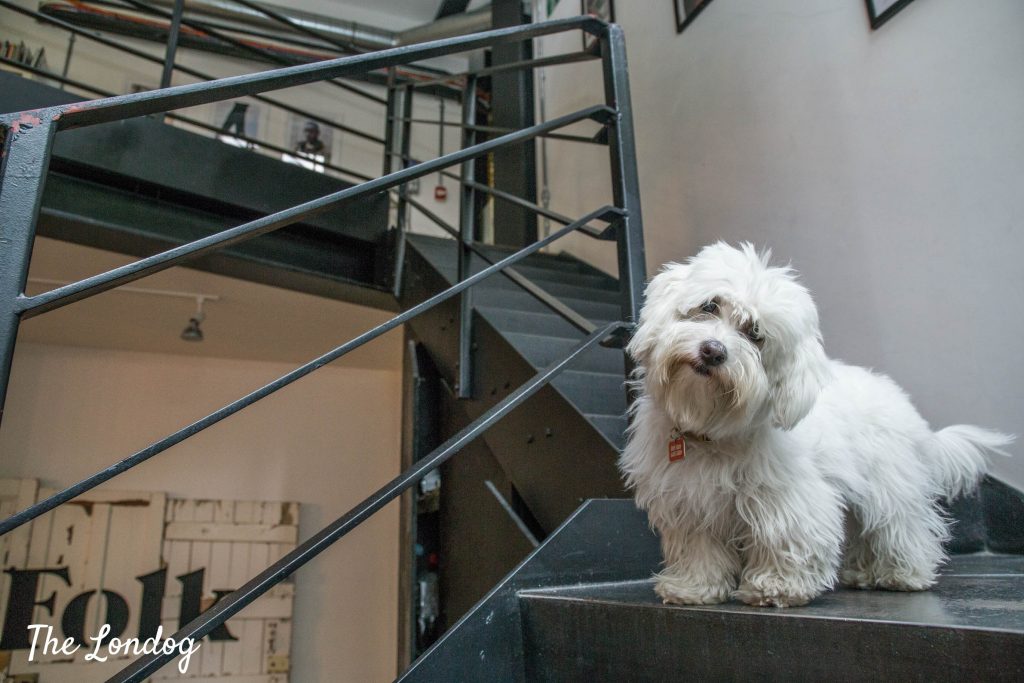 I meet Kimberly and Bobby at AnalogFolk offices in Clerkenwell. It is a sunny evening and Kim picks me up at reception, a cool space combining vintage and modern furniture, with leather sofas, a phonograph and an old cabinet to represent the old and colourful neon signs and upcycled material counters bringing modernity. I imagine this combination to be on brand with AnalogFolk’s mission to “use digital to make the analog world better.” The reception area is normally precluded to dogs, so I meet Bobby when we walk downstairs in the office space.

I guess it is part of being a non-native English speaker, but I often mistake the gender of dogs I meet from their name. So when Kim tells me that Bobby is a girl rather than a boy, my first thought it that I did it again. But she soon reassures me, “Despite her name and general boyish charms, she’s actually a girl, but none of us, including Bob, really mind when people inevitably get that wrong.” 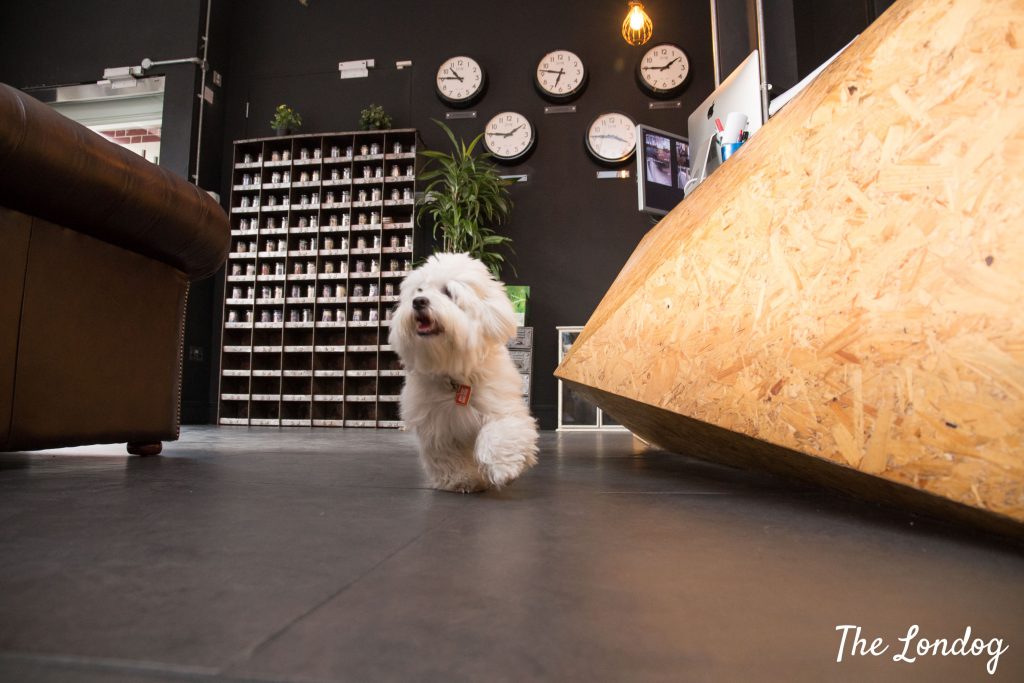 “She’s very social, and she loves basically all people and all dogs and wants to be around them constantly. Even though she looks a bit like a stuffed toy come to life in an 80s children’s movie, she is surprisingly smart and loves to learn new things and perform for people,” says Kim. “I think one of the things that makes me laugh most are the weird noises she makes. She doesn’t often bark, but she sometimes makes a bunch of grunting noises in an attempt to communicate.” She doesn’t seem to just enjoy making fun noises, but also reacting to these with interest. I soon notice her talent for head tilts, which makes her look like a toy.

Bobby is also known for…

Loving: Basically everyone, both human and canine, but especially her mum
Hating: Rolling suitcases, skateboards, and Karen
Funniest habit: That sound when she yawns
Most annoying habit: Sleeping with her head right next to the wheels on your chair.
Most famous episode: She’s become quite well known around the office for her Instagram account (@bobby_the_warrior_princess). It brings out the other side of Bob that you don’t really see day to day. Behind that sweet and loving facade is a Machiavellian mastermind hell-bent on world domination. Some of her more devoted social media followers apparently have to remind themselves that she’s not actually evil in real life (or at least that’s what she wants them to think).
Most infamous episode: The first time I ever left someone else to watch her during the day, someone managed to roll over her tail with their chair. There was a yelp heard around the entire office, and the founder’s dog was really worried and came to comfort her. Her tail was fine in the end; it must have just pulled some of her tail hair, but I got so many panicked messages and questions about that.
Nickname: Bob. She’s also often called the office therapy dog, since she’s so soft and calm and likes a cuddle, so anyone who is having a bad day or a bit of a rough time can come and pet her and get all that sweet oxytocin released in their brains.

An office dog day at AnalogFolk 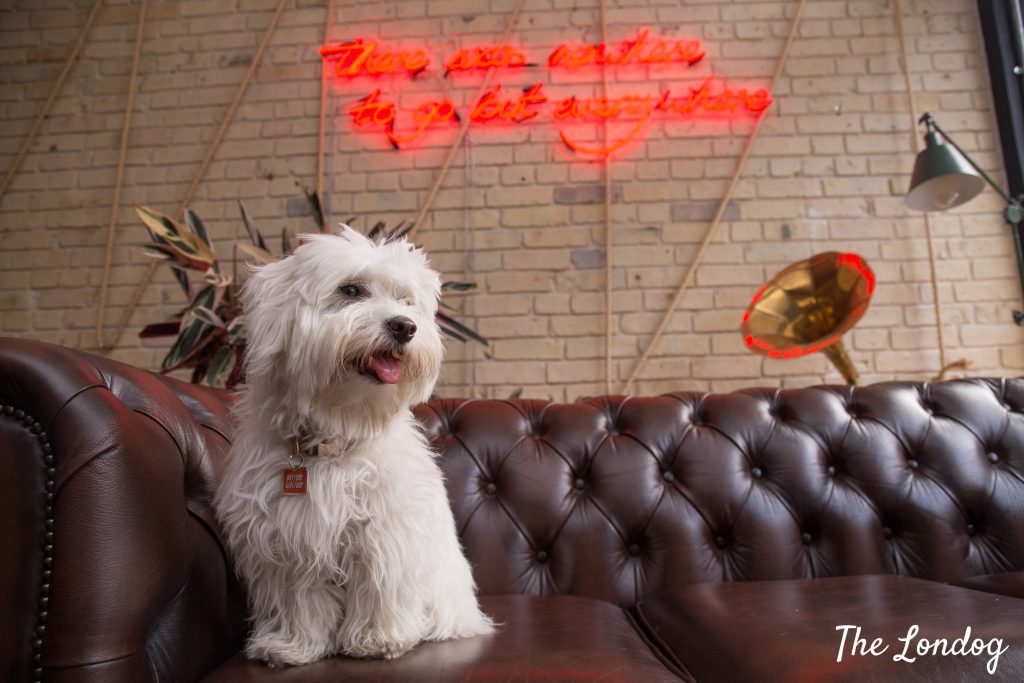 Like many office dogs I meet, she was initiated to agency life since she was a puppy, coming in regularly at the workplace since when she was about 13 weeks old. She also soon adapted to commuting, taking the tube on a daily basis to get to work. She has developed her own technique to get other commuters’ attention, when travelling to work. “She’ll often single out one person and stare them down until they give in and pet her. People will also often reach out to stroke her during surprisingly inopportune times during the commute, like when we’re trying to get off the tube or while passing on the escalator. During the walking parts of the commute, she can get pretty distracted, but she has a walking stick that keeps her moving. It’s literally just a stick we found on the ground somewhere that she’s only allowed to carry around when she walks.”

Early morning greeting rounds are a must, when she runs around saying hello to anything that moves. “Once she’s reached her cuddle quota, she retreats under my desk to sleep. She’ll generally only wake up if someone wants to say hello or if I drag her along to a meeting. If she wakes up and realises I’ve gone, she’ll walk over and sit in front of the toilets to wait for me to appear, which can be very confusing because usually that’s not where I am.” 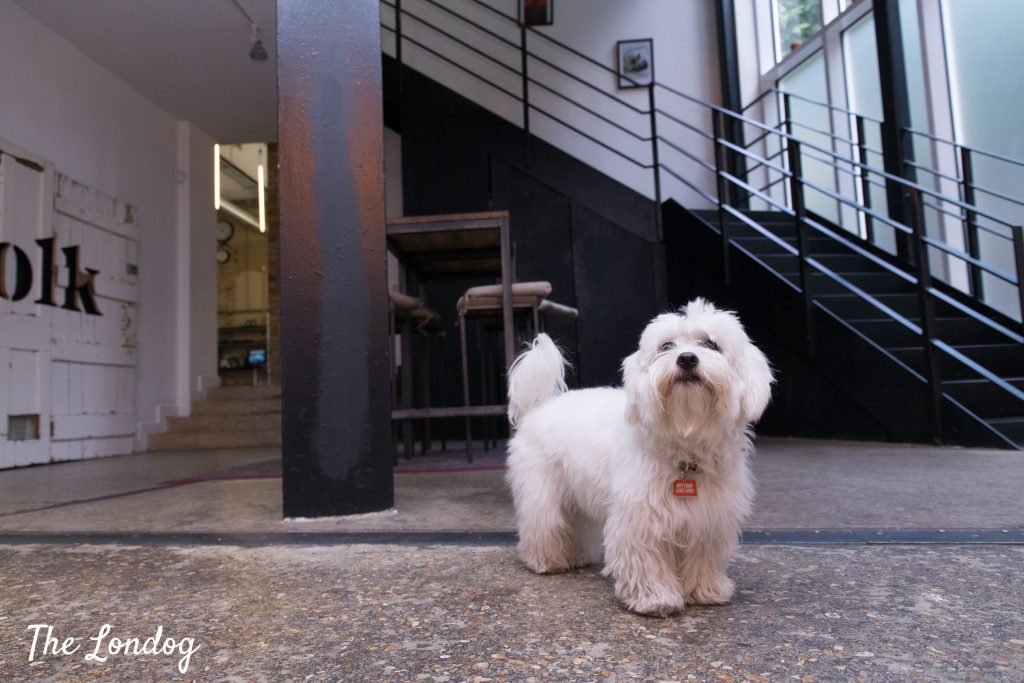 AnalogFolk’s office space could be probably described as having an industrial chic style. There are concrete floors (great for dogs in the Summer and better than carpets on rainy days), leather sofas, metal and wood furniture. One of the best features is a set of vintage doors, on which there is AnalogFolk logo; they remind me of Disney movie Monsters, Inc., but while Bobby’s fluff might be a common characteristic with Monsters, Inc’s Sullivan, her tiny size couldn’t make her in the role. As flashes cross my mind, while I try to photograph Bobby, she happily jumps around when some of her favourite colleagues stop by. She has the curiosity and energy of the puppy she is!

Kim knows how to keep her entertained at the office, and she recounts that she runs through all her different tricks she knows for bits of kibble on a daily basis, and lets her search for other bits throughout the afternoon in her snuffle mat. “Sometimes we’ll add in some mid-morning or mid-afternoon walks in there, too, but mostly she just goes back to napping under my desk again for the afternoon, waking for cuddles or to growl at ghosts (or music she disapproves of),” adds Kim.

Lunchtime is also a chance for a good walk, and they are lucky the area offers some good spots. “At lunchtime, we’ll go for a bit of a wander to buy some food for me, usually down to Leather Lane or Exmouth Market. If the weather is nice, we’ll eat in Spa Fields and she’ll run around on her long lead, mostly just wandering over to various people to say hello. If the weather is bad, we try to get back to the office as soon as possible because she’s not a big fan of being wet, plus she starts to look a bit like a rat.” 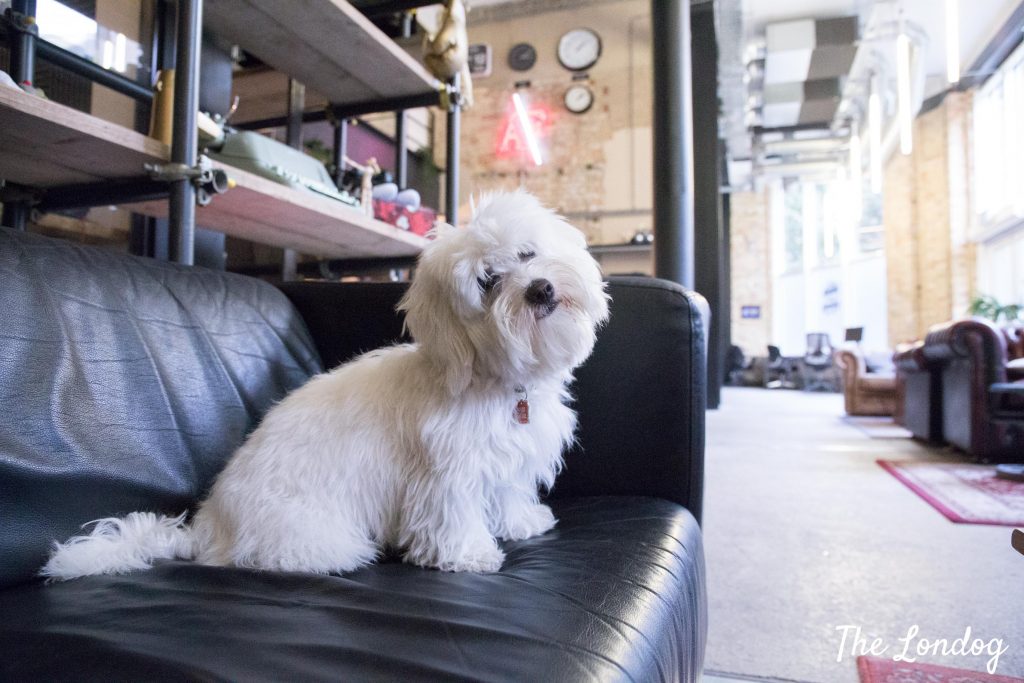 Sometimes Bobby gets to meet and be enthusiastic about other dogs coming to the office. “There’s another dog named Kuro, and she mostly just likes to stand there and sniff his shoulder or whatever bit he’ll tolerate before walking off,” explains Kim.

From a human perspective, Bobby has been a great addition to the team. “I think she has been great for mental health in the office. Petting her can be such a stress reliever, and I think she generally makes everyone a lot happier. You can actually see how people light up when they see her. It can be a bit of a challenge when I have to go to a client’s office without much notice, but people love her, so it’s never really an issue to find someone to keep an eye on her when I’m out.”

In general, AnalogFolk welcomes dogs and has some rules in place to make sure that everyone is happy. “They’re allowed in every day except Fridays,” says Kim. “[In addition,] there can only be 3 dogs in the office at a time (there’s a calendar to keep it all organised), and they aren’t allowed up on the top floor/in reception. People love having the dogs around though, and they can freely wander around if their people are comfortable with that.” 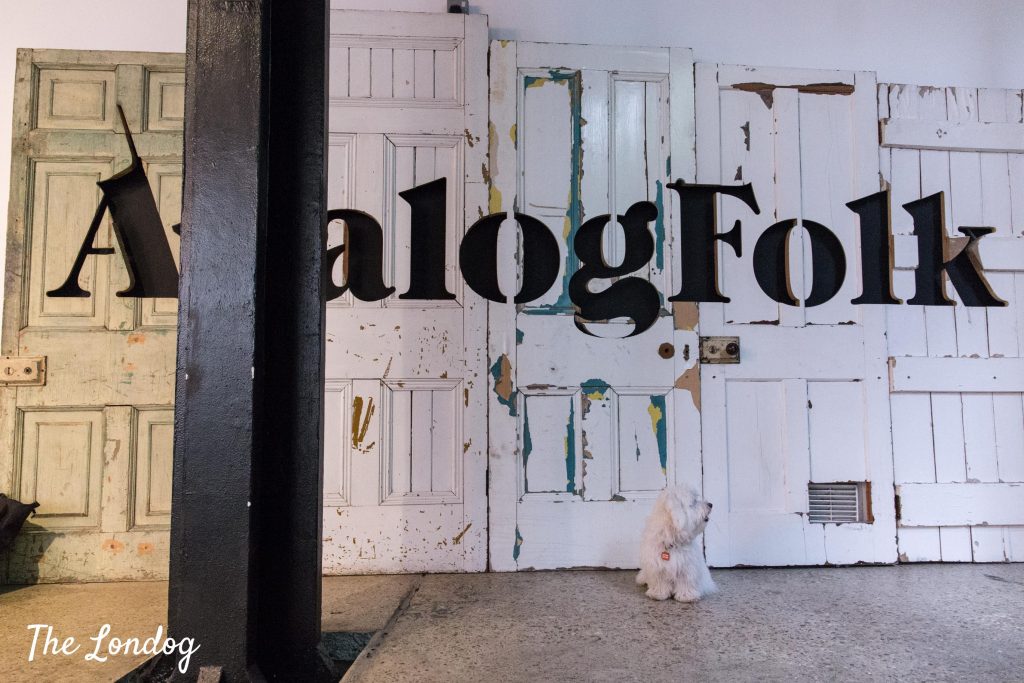 Chatting with Kim about dos and donts with dogs at the office, she lists: