By The LondogSeptember 2, 2019No Comments 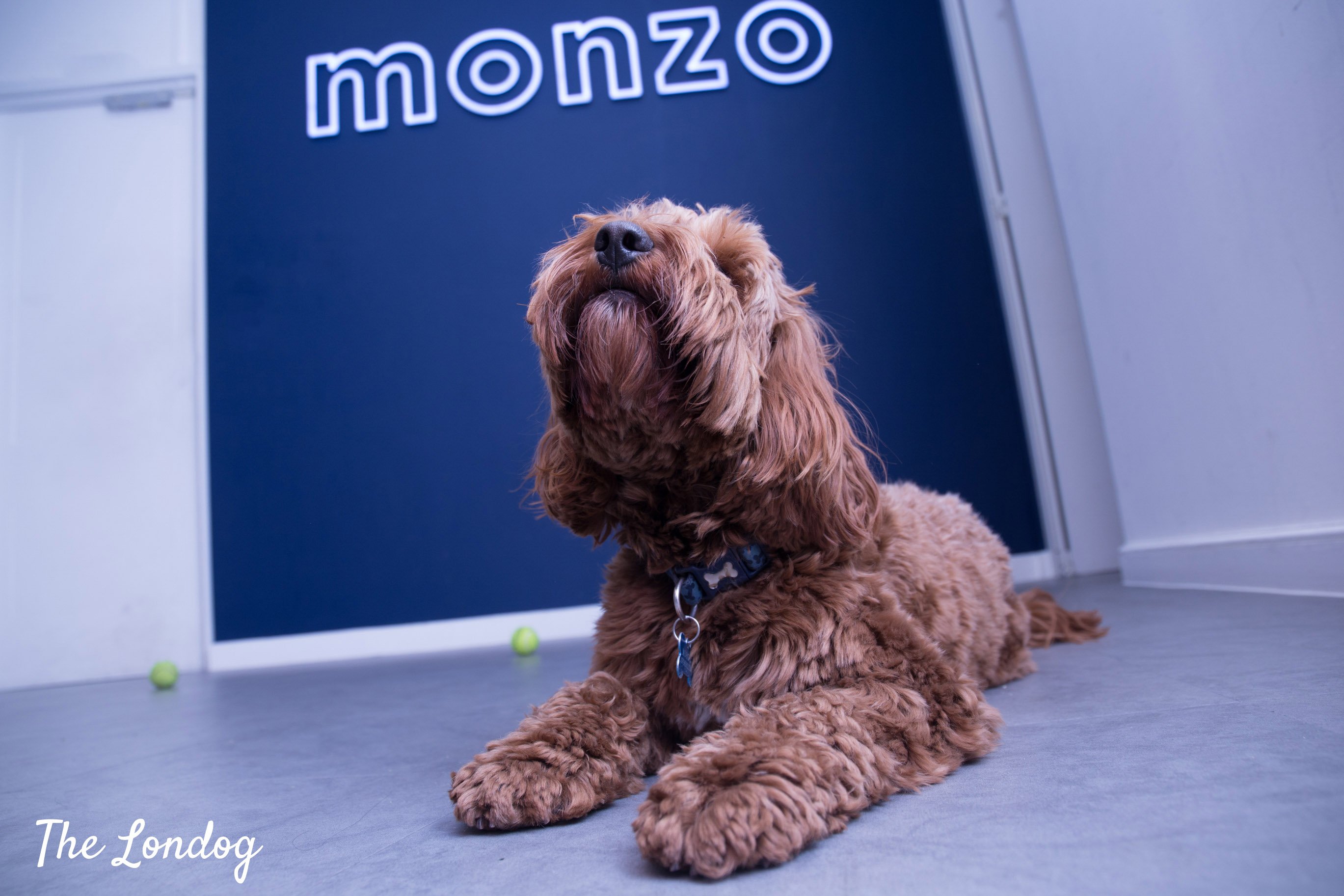 Fintech business Monzo‘s iconic coral debit cards are something that you are likely to have seen around town – if you don’t have in your own wallet – . Less known about is that Monzo is a dog-friendly workplace and has a lovely mascot. One year and a half old Cockapoo Bingo has been a proud member of the team for a while, and can be found playing lift roulette, scouting cardboard and looking for ball throwers around the office. Today his story opens this 14th edition of the Office Dog Series, which will take you throw a trip inside London’s offices to meet their canine 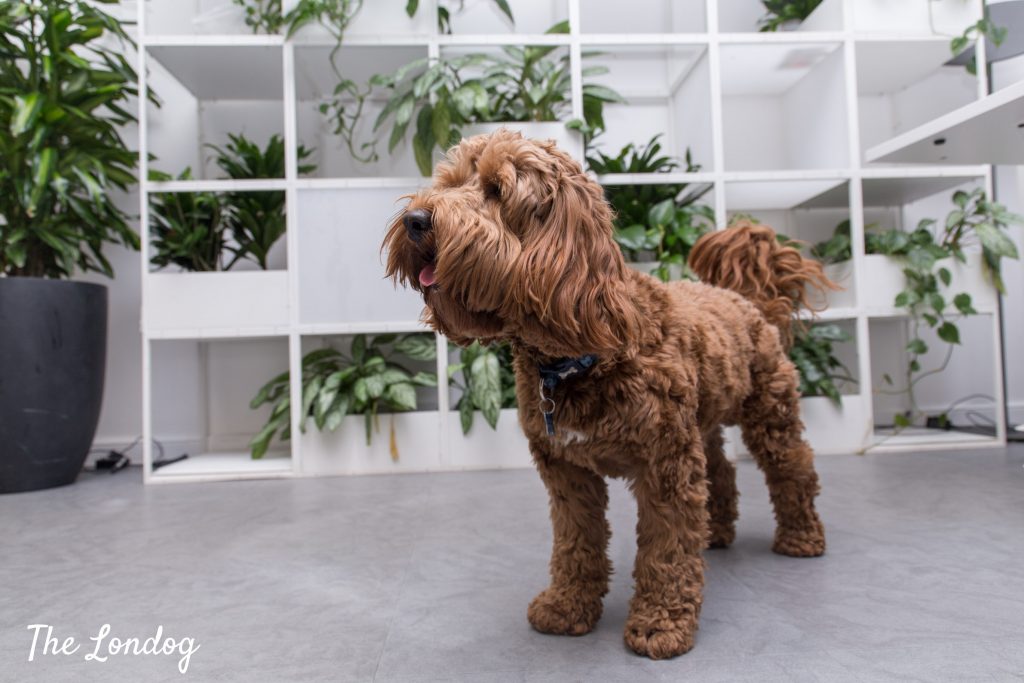 Bingo has a host of nicknames (Bings, Bingles, Pup, Puppy, Pupsicle), but he’s also known as the Office Dog or simply the Monzo Dog, as he’s been photographed a couple of times with Tom Blomfield, Monzo CEO for newspaper articles, explains his mum Lizzie. He also goes by the name of Chief Cardboard Recycler, thanks to his known love of the material.

“Bingo is a classic Cockapoo – 100% a companion dog, he loves being around people and will say hello to everyone, normally by jumping up at them trying to lick/nibble at their hand. He makes me laugh every day with his big personality,” says Lizzie. She got him from the North West of England following a break up. “I think people had their reservations about whether it was a good idea (which is in hindsight understandable) but […] he is the best snap decision I’ll ever make!”, she adds.

Bingo has a jolly character, and when I visit Monzo’s London office in Finsbury Square, he charges out of the lift, trotting towards the reception area to meet me at the barriers. 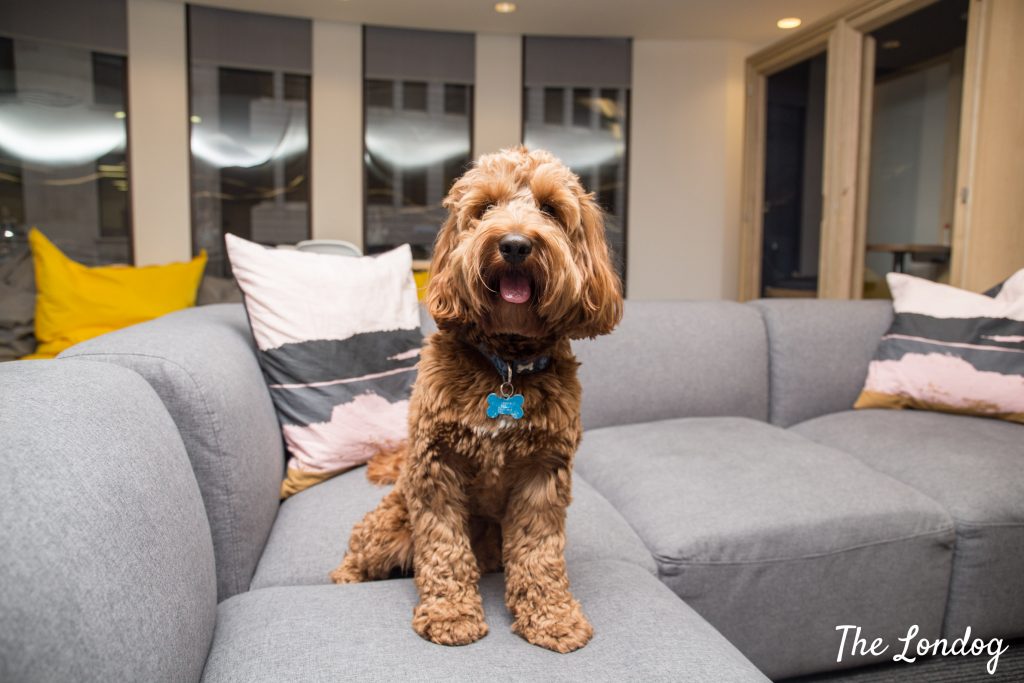 Bingo is also known for…

Loving: Cardboard. He will demolish any box you give him. Belly rubs. People. Playing chase. Destroying toys. He’ll take all the fluff out of a toy within a couple of hours of getting a new one! The office is littered with the carcasses of dead toys! Mud. He will detour to walk, swim, roll or wallow in the stuff.

Hating: Being ignored. Vacuum cleaners – goes absolutely mental if one is turned on! Doesn’t hate bigger dogs but is definitely scared of them! When other dogs come into the office, if they’re bigger than him (and he’s not very big so most are!) he’ll tend to hide under a sofa! He has a love/hate relationship with the hairdryer.

Funniest habit: Destroying any cardboard box you give him. Literally bathing in mud. He cakes himself in it, it’s both hilarious and very messy!

Most annoying habit: He loves balls with squeakers in them, and will lie there for hours (if I let him) just squeaking them in his mouth. I have to ration them because it drives me crazy! Again, mud, because it takes so long to get it out of his fur!

Most infamous episode: The first day we moved into our new office, someone messaged me on Slack [a team chat software] to say they’d just seen Bingo get into a lift on his own. We eventually found him roaming the sixth floor. He now often wanders into a lift and go exploring! The security guards are great at making sure he doesn’t flee the building! 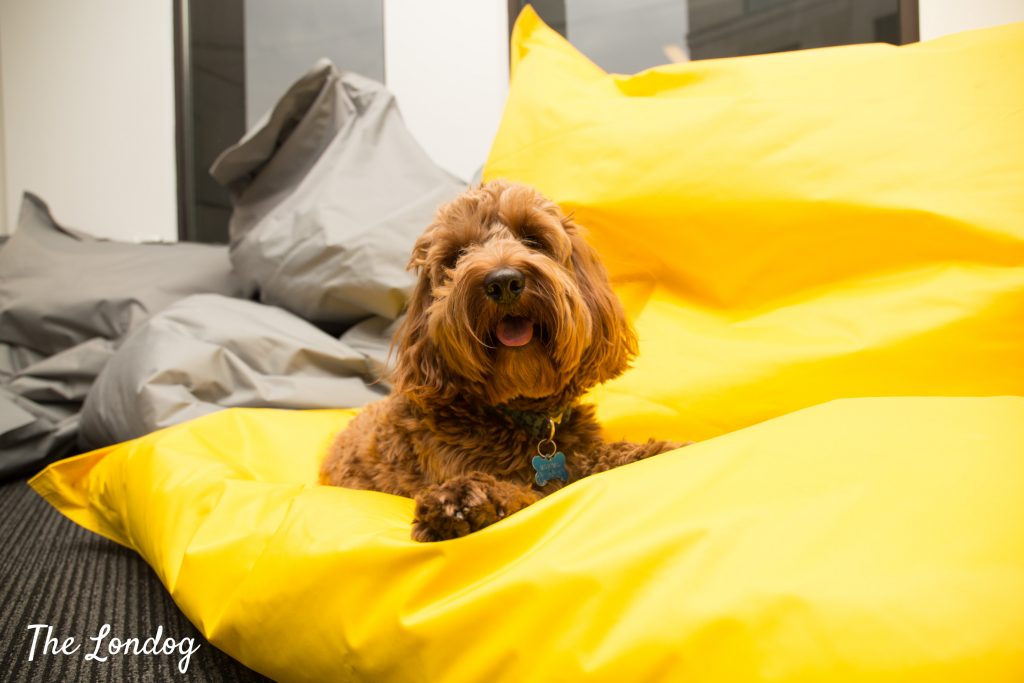 The doors of the lift open and Bingo makes way to his and Lizzie’s team room. As we walk down the corridor, I notice that each space has a sign next to its door. We pass by the “Securitea” room, which apart from the funny name, features emojis and a pic of Bingo – a welcome light note compared to the traditional financial industry seriousness.

As we enter into the Fincrime room, I am struck by the warm welcome I receive from Monzo’s people. While in many offices the arrival of a guest barely produces a reaction among staff staring at their screens or walking by, at Monzo everyone in the room takes the time to say hello and introduce themselves. Needless to say that this makes me feel very welcome, and I guess it must be a sign of openness and an inclusive attitude that must permeate the company. I notice a huge poster of Bingo is hanging on the wall. Lizzie explains that it was made for a Pin the Tail game they did at the office, which explains a fake tail attached to Bingo’s doppelganger. 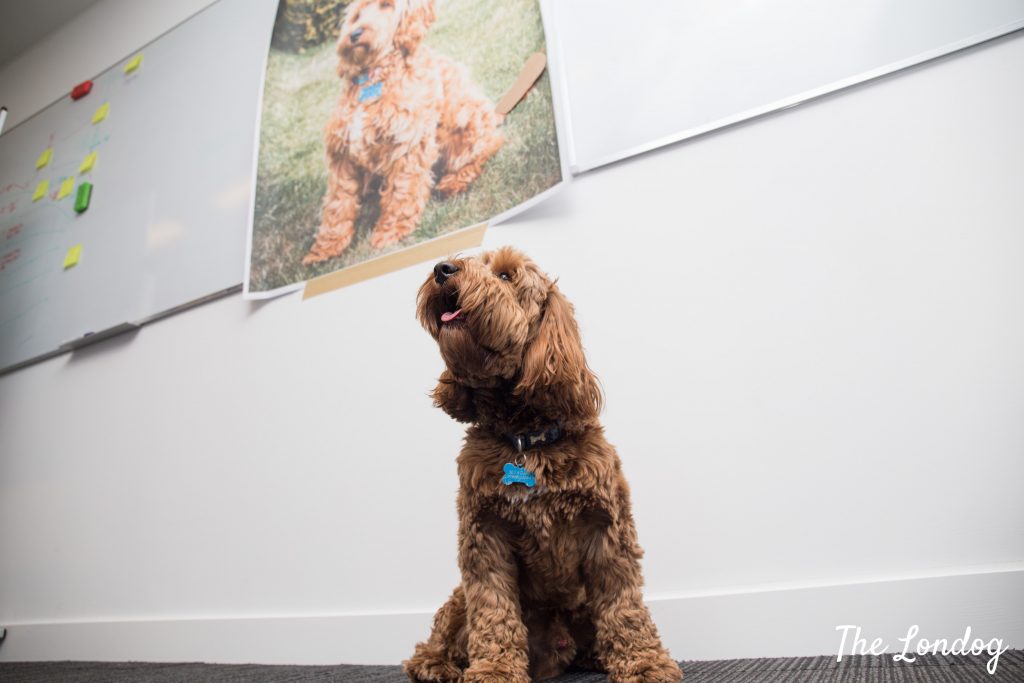 In the meantime, Bingo is roaming around. The area outside of the Team’s room is one of his favourite spots, says Lizzie, “He likes to lie [there], in a spot that will ensure the most foot traffic/attention. There’s a big meeting room opposite where our team room is, so he’ll meet and greet those going in and out of there throughout the day. I make him sound like a nightmare but he literally just lies there and when he sees someone walking over, he’ll roll onto his back, ready for a belly rub!”

Other favourite spots he likes to hang around include under a colleague’s desk when he is not in, or anywhere he can sploot on a cold floor – “I think this is why he likes getting in the lift so much!” notes Lizzie. We also stop by some bean bags Bingo enjoys jumping on when he comes in. “[When we arrive at the office in the morning] he’ll often go mental, and charge up and down office, barking and going round and round in circles. Seeing as he’s been coming to the office with me pretty much since day one he’s very comfortable around humans, and is more keen on them than other dogs!” 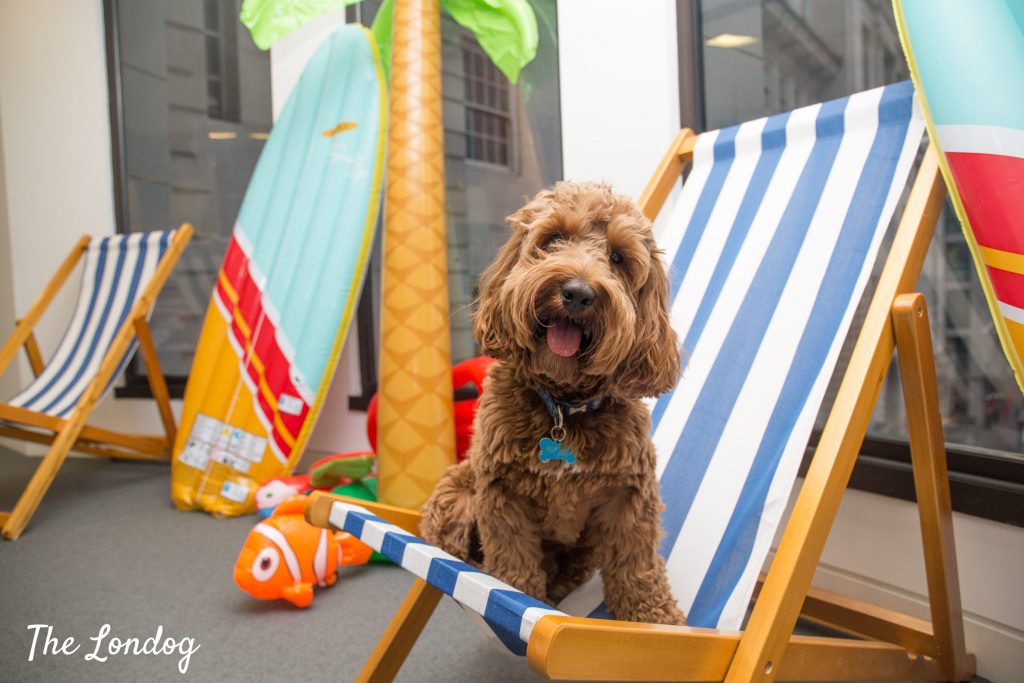 But Bingo is not always full on. After his lunchtime walk, he may be found sleeping through the afternoon before he heads for home, or out for a drink/dinner with friends with Lizzie, although there are days when afternoon is when he gets into play mode again.

Lizzie reveals that, in general, he is a dog who knows what he wants and will do his best to get it. “I joke that he’s a bit of a spoilt brat but he’s just so cute it’s hard to stay mad at him! An example – he’s gotten into the habit of getting people to hold his chew bones for him, so will walk around our team room trying to get someone to hold a bone so he can eat it. If no one plays along, he tends to just lie there staring at you until you give in. Similarly, when he’s bored and wants you to play with him, he’ll drop a toy at your chair and just stare you out. And as a last resort, will start indignantly barking. He actually tries to bat my phone out of my hand when he wants/expects my undivided attention and I’m not giving it to him,” she notes. 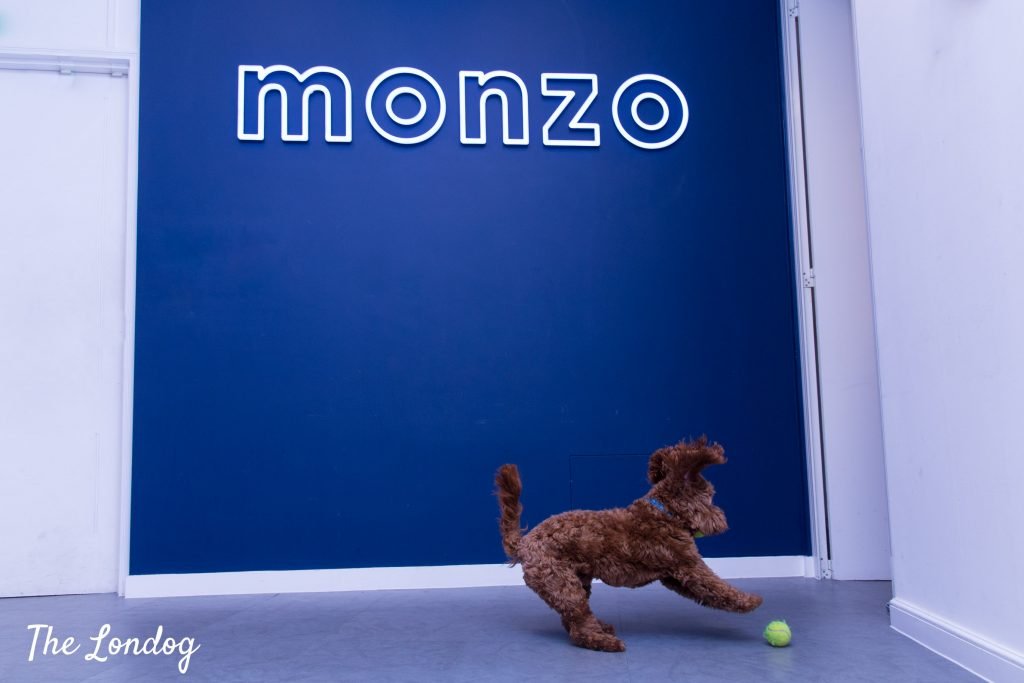 After some photos in the meeting room – which is not your average one, with Summer inflatables and deckchairs decorating the space -, our tour continues to the kitchen area at floor -1. Lizzie shares some nuggets about Bingo’s routine around that place. “When I go to make a coffee on -1 Bingo will sploot in the middle of the kitchen area to maximise attention opportunities. [Once] back upstairs, he’ll do a patrol of the bins on the floor for any uneaten breakfasts then will flop down somewhere for a nap,” she explains. “Whenever someone else comes into the team room, he’ll give them a big welcome (maybe by trying to get them to play with him).” 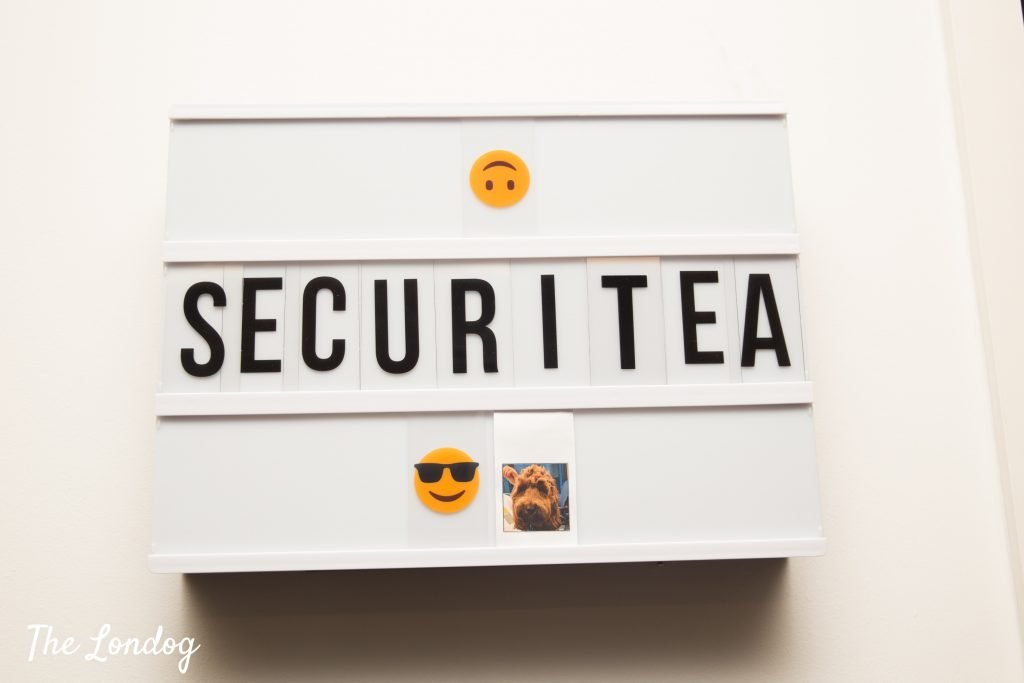 They say that good habits stick and the first few months of a dog’s life are key in their development. Hence, no wonder that commuting isn’t an issue for Bingo, who has been experiencing morning train rides it since he was a tiny pup. “I think he sees the commute as an opportunity to get some attention – captive audience and all! I used to take the Waterloo and City line and so many commuters would say how much it brightened their day to meet him!” adds Lizzie.

While he is now a grown up and a well-behaved boy, there had been some challenges when he was a little puppy at the office. “I’m glad that he’s no longer teething and is house trained! When he was teething and biting everything we’d be in a meeting and he’s start barking and wanting to play/bite something, so either me or one of my colleagues would let him attack our trainers to keep him quiet. Luckily he’s grown out of that phase!” says Lizzie. 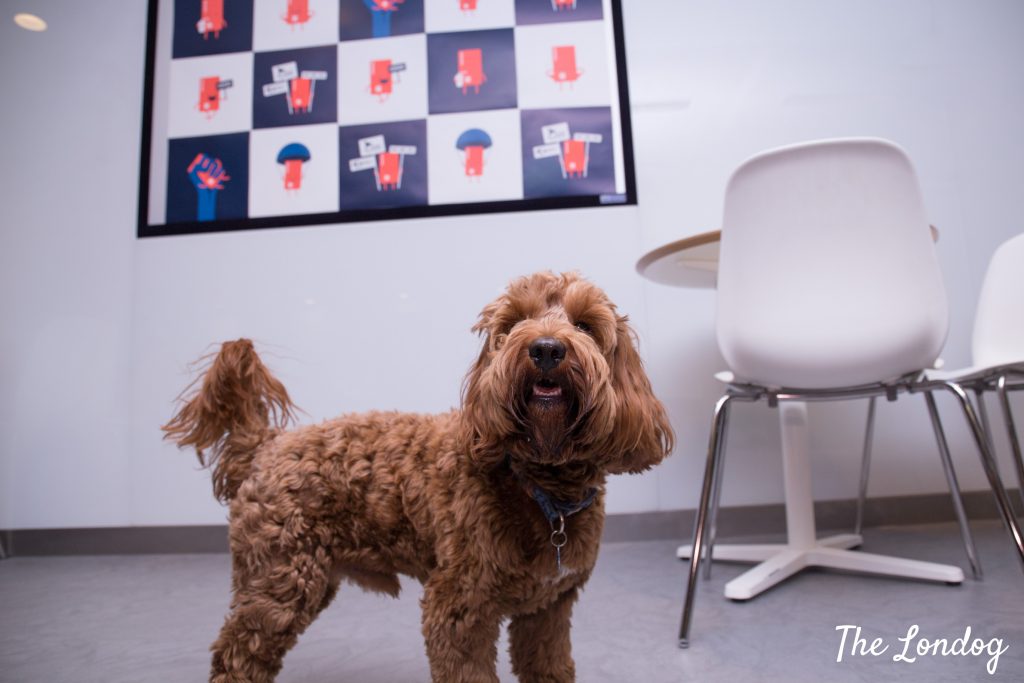 The innovative, young and disruptive vibe of Monzo compared to the traditional banking sector standard makes it feels natural that the company is also very dog-friendly! “There’s a #dogs Slack channel, a #pets slack channel and a few of the regular dogs have their own Slack channels. There are a few office dogs at our Cardiff office as well as dogs here at the London office. Obviously there are a few basic guidelines like the dog has to be well-behaved, get on with other dogs, etc.”, says Lizzie.

“I think in London, Bingo is the only dog who comes in every day but there are quite a few dogs who’ll come in for a day or two on a weekly/regular basis,” she continues. “I think the most dog we’ve ever had in the London office at the same time is six. They get together on -1 (where the kitchen is) to play, as it could be pretty disruptive if they start playing in the open-plan floors!” 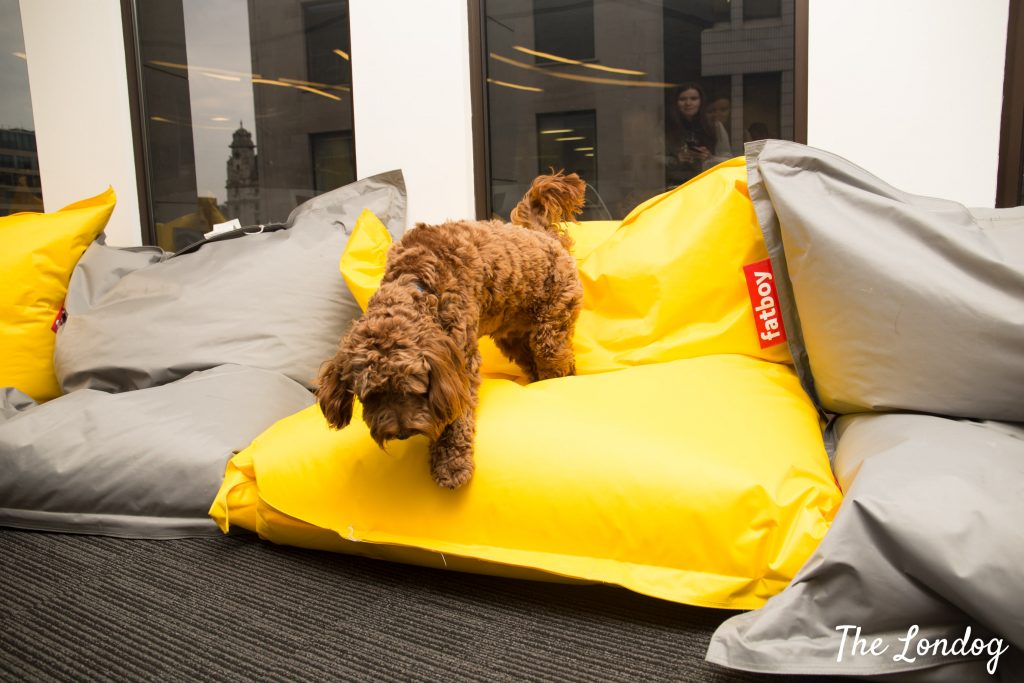 The team has been very supportive with Lizzie since Bingo arrived and they adore Bingo. “I think they love his playful happy personality, he’s pretty cheeky and just makes people laugh at his antics. Especially when he starts running around going mental for no reason. Lots of people in the company have said that he’s a good de-stressor. People will often come into our team room to say that they’re having a stressful day and just need to sit with Bingo for a little bit. He’s sort of become the unofficial therapy dog for the office! Even though I’ve made it sound like he needs attention non-stop, he goes for long periods of the day fast asleep so he’s never stunted productivity!” says Lizzie.

“I’m incredibly lucky in that everyone in my team and other people in the company really help me out a lot [with Bingo] – especially if I have got lots of meetings, they’ll all play with him for a few minutes or take him out for a wee. I’ve also got a lovely group of dog-sitters at Monzo who will take him for a night, a weekend or once, three whole weeks! I think it would be much more challenging to own a dog in London if I didn’t work with such great people,” she concludes.

Some tips for humans and for dogs for office survival? Lizzie lists: 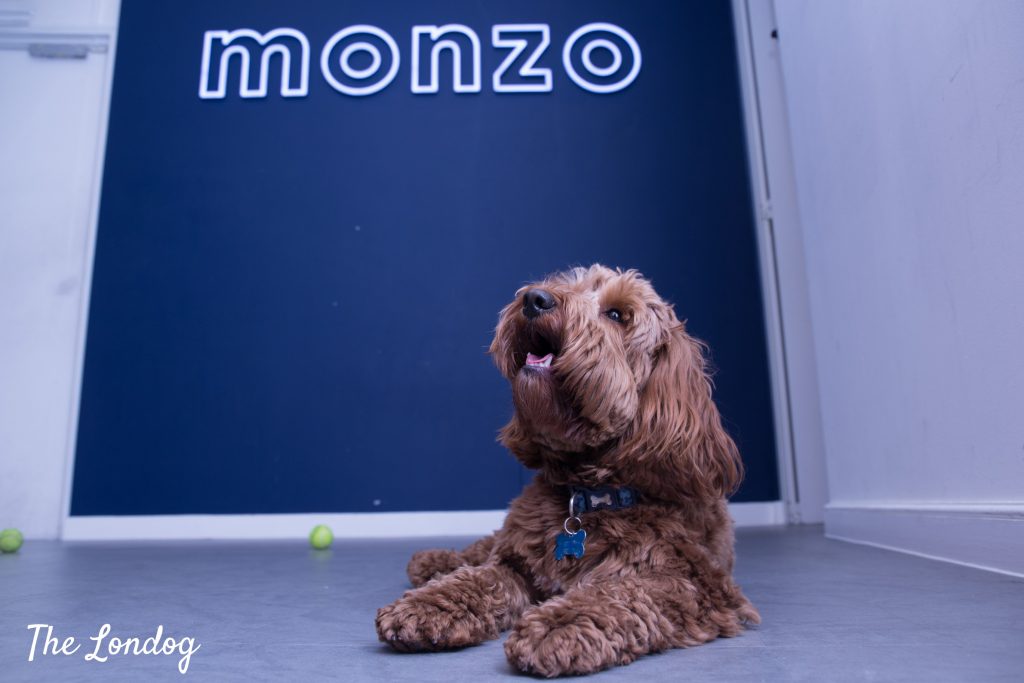