By The LondogDecember 6, 2019No Comments 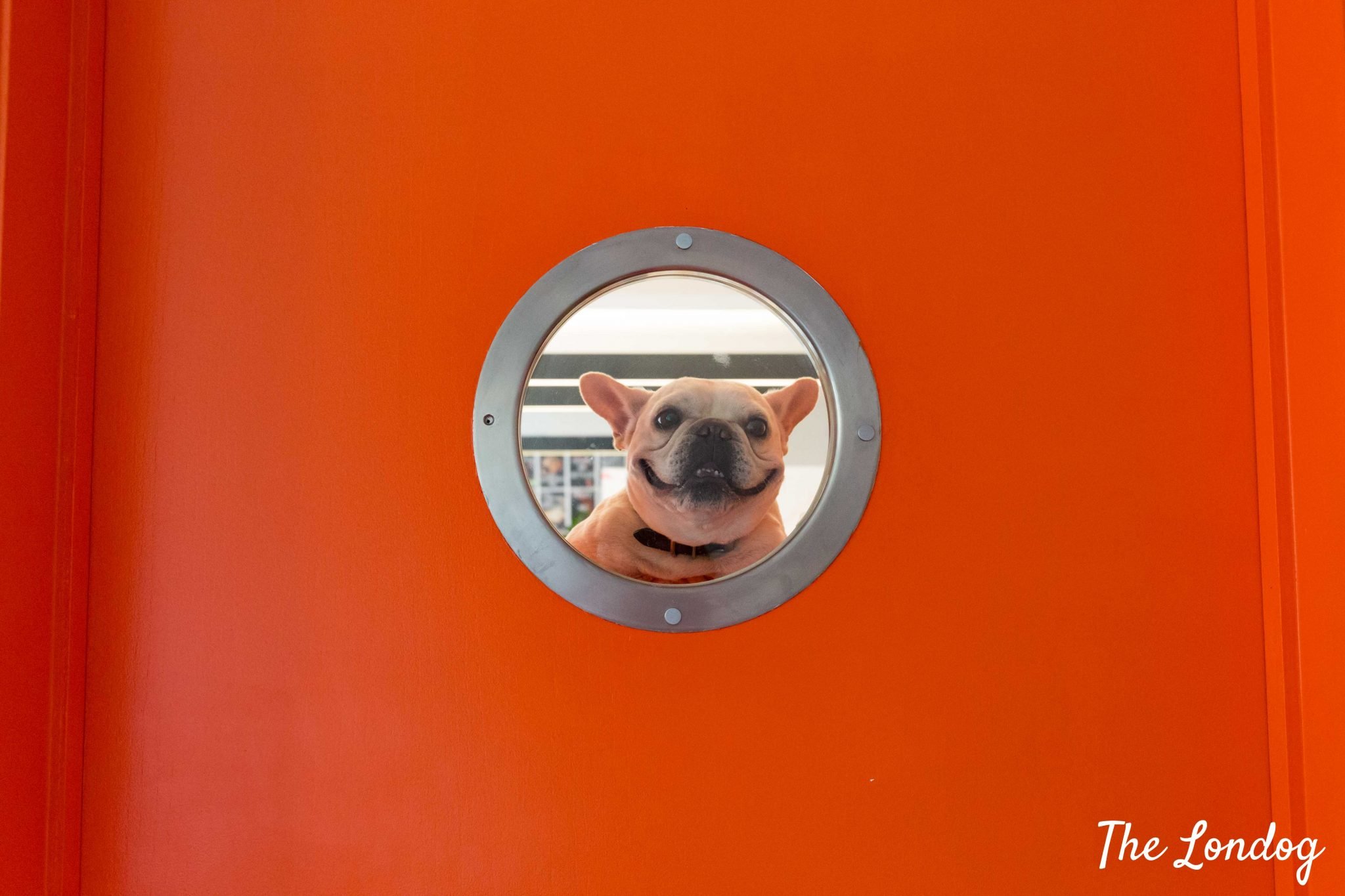 What better way to conclude another edition of the Office Dog Series than with an amazing office dog pack like that of advertisement agency Wieden+Kennedy. Their cool offices just off Brick Lane, in Shoreditch, welcome a varied bunch of fluffy coworkers. 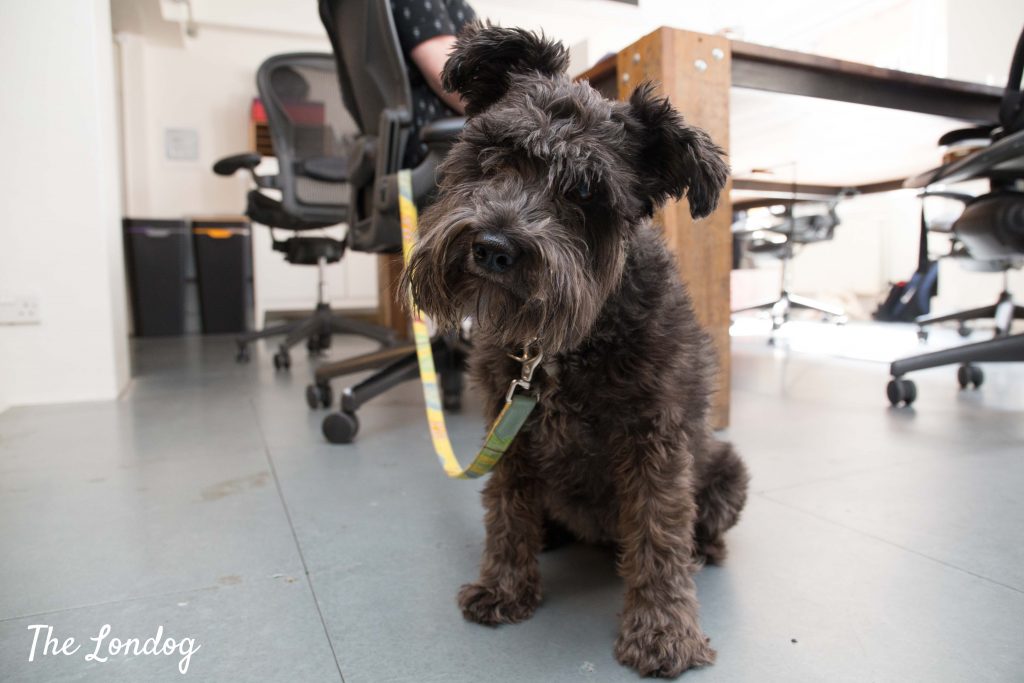 It’s the first day of the works for refurbishing W+K’s offices, when I visit, so there is a bit of hustle and part of the team has been relocated in the building opposite their HQ. As I walk upstairs I see a white and fawn dog tucked under a round table where three people are discussing work matters. Not far, a tiny canine with a pronounced underbite grin peeks out from an open Mac sitting on a man’s lap, while he types away.

As one would expect from an advertisement agency, the building is definitely not boring and there are some distinctive and unexpected features, among which a giant pig head wearing a blond wig staring passer-bys from the top of a staircase. Not the favourite of everyone, but definitely something that stands out. 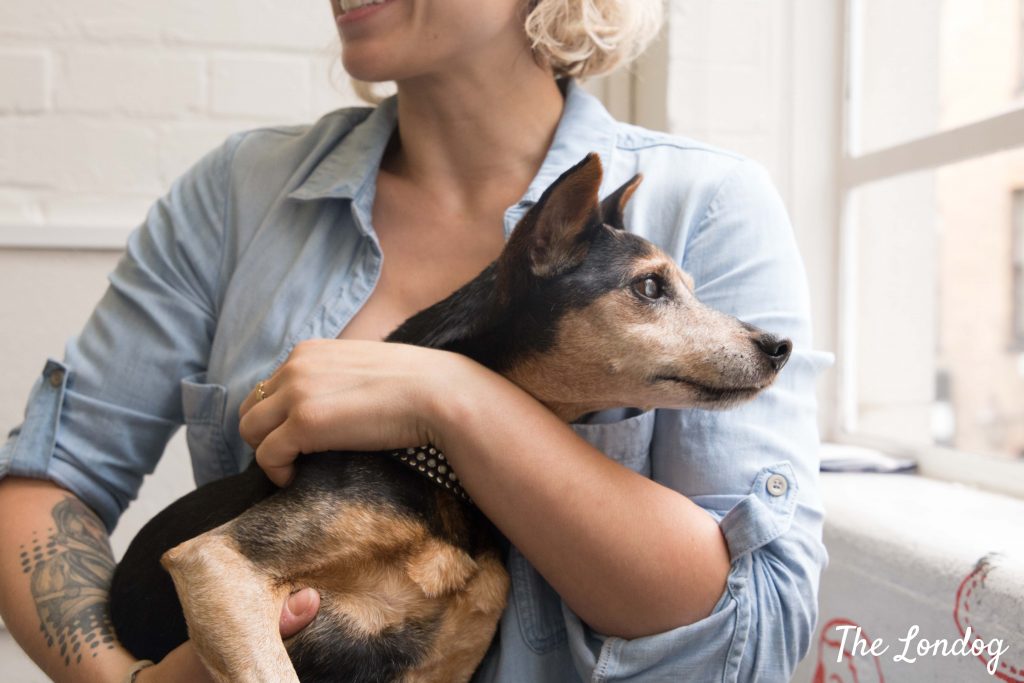 Worried and bold, shy and friendly, young and old, each dog brings their own to the pack and as I look at the photos taken I can see how much those traits are frozen in their body posture and gaze (try and can guess yourself by looking at their photos below before reading the text about them). I have so much fun meeting them all and the most hilarious moment with 7 agency dogs is when trying to get a shot of all of them together, starting with a bunch of perplexed dogs and tangled leads and eventually ending with a better outcome with humans coming together to work out problem solving. But let’s introduce the dogs, as seen by their humans. 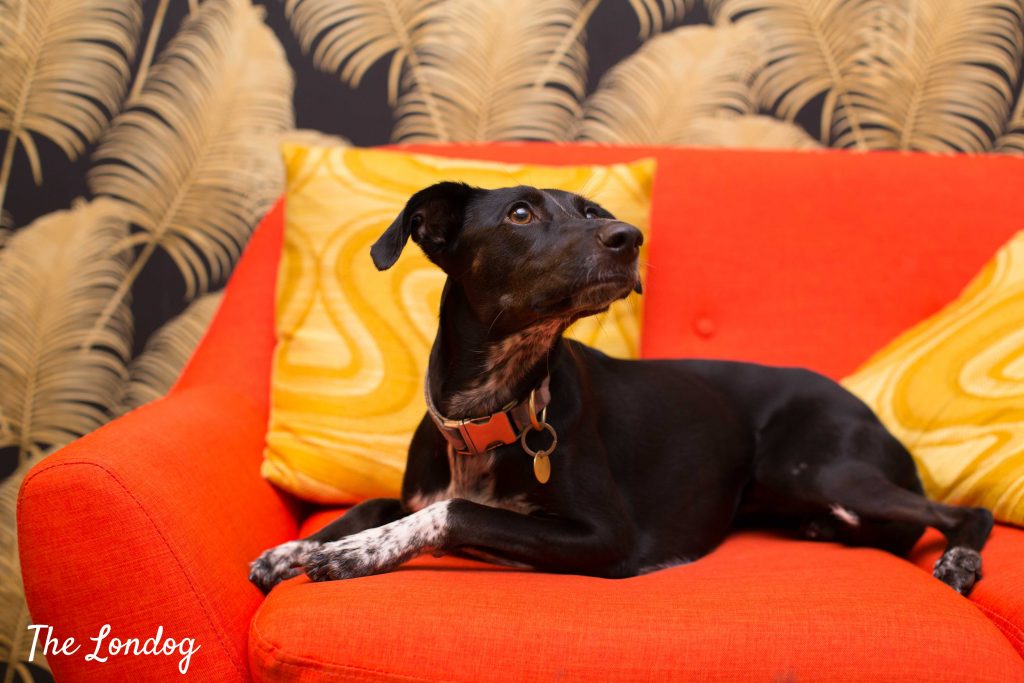 Friday is 2.5 year-old rescue dog from the streets of southern Spain. A total cuddle monster who thinks she is a lap dog but is actually quite big. She loves to chase squirrels and birds (she is basically a full time Ornithologist). And can outrun most doggos at her local park.

3 adjectives that define her: Needy, Sleek, Hyperactive
Likes: Jumping up to say hi.
Funniest habit: Curling up into a small ball on my lap – like the dragon emoji.
Hating: Being alone.
Known for: Being best friends with Gertie. And her koala style cuddle when she wants attention.
If she was a famous character, she would be: A Russian Ballerina. She’s got long legs.
Nicknames: Small Fri. Fri Fri. Fridizzle
Quote: “Thank god it’s Friday.” 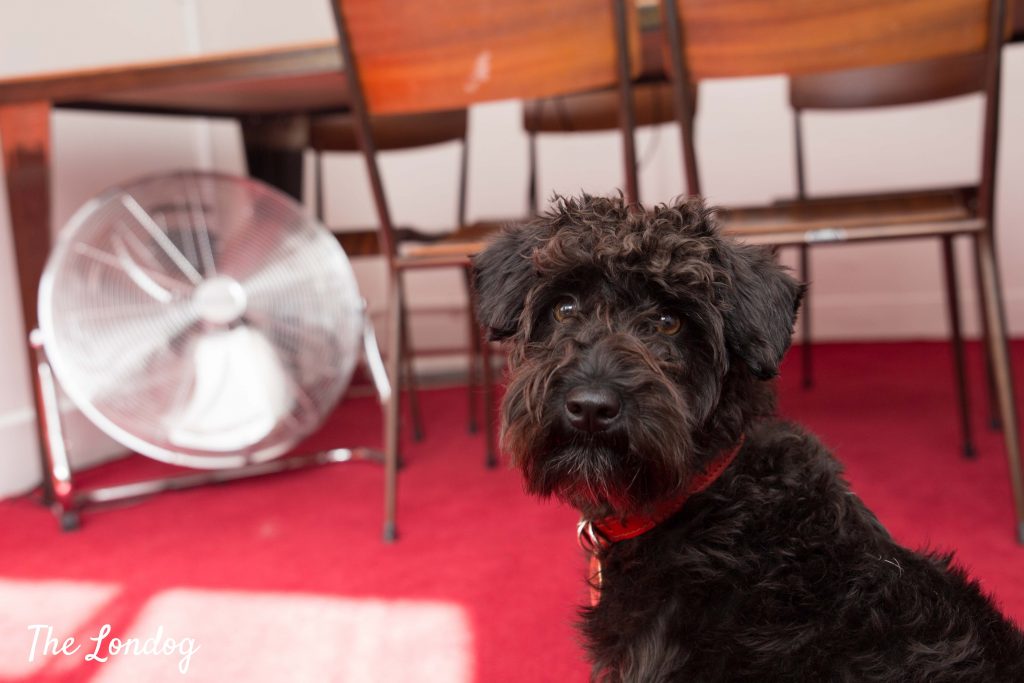 Margo is a Mini Schnoodle (a cross between a Schnauzer and a Poodle) named after Margo Leddbetter from the Goodlife. Described as bendy, sweet and foozy, her human of her says that her little body and long legs means she walks like a dressage pony. Margo loves a cuddle and eating socks, lives by the beach and loves paddle in the sea.

Likes: Hiding from other dogs on walks and when the other dogs get nearer pouncing out at them. Pow.
Funniest habit: Howling at the sky when it thunders like wolf.
What Margo is known for: Being too god damn cute.
Quote:  “Jim Margo has done a little turd in the spare bedroom again” 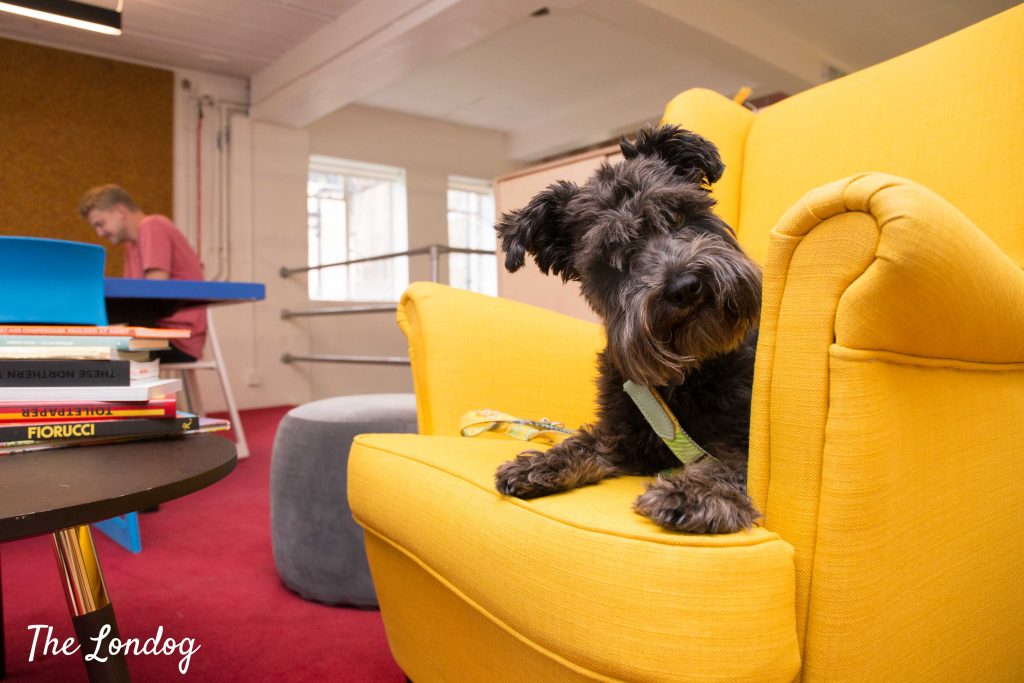 Dolly is a five-year old Mini Schnauzer. Named after Dolly Parton after her human lost the battle with her husband to name her Jolene (too embarrassing to shout in the park apparently). She’s super affectionate and has been known to give you ‘the paw’ if you have the temerity to stop stroking her mid cuddle.

3 adjectives to define her: Affectionate, Attention-seeking, Adorable
Likes: Tummy rubs.
Funniest habit: She’s such a good girl that if we have other dogs to stay and they do something naughty, she runs and hides with shame.
Known for: A very distinctive OOORRROOOOO when she’s excited (which is usually on arrival anywhere where she might be fussed)
If she was a famous character, she would be: The Queen Mother, likes a life of luxury, would totally be on the Gin.
Nicknames: Dolly Rocker, D-Rock, D-Dolly Rocker, DD, Little Pickle, My Favourite
Quote: “You’re beautiful” she insists on this being said to her every morning. 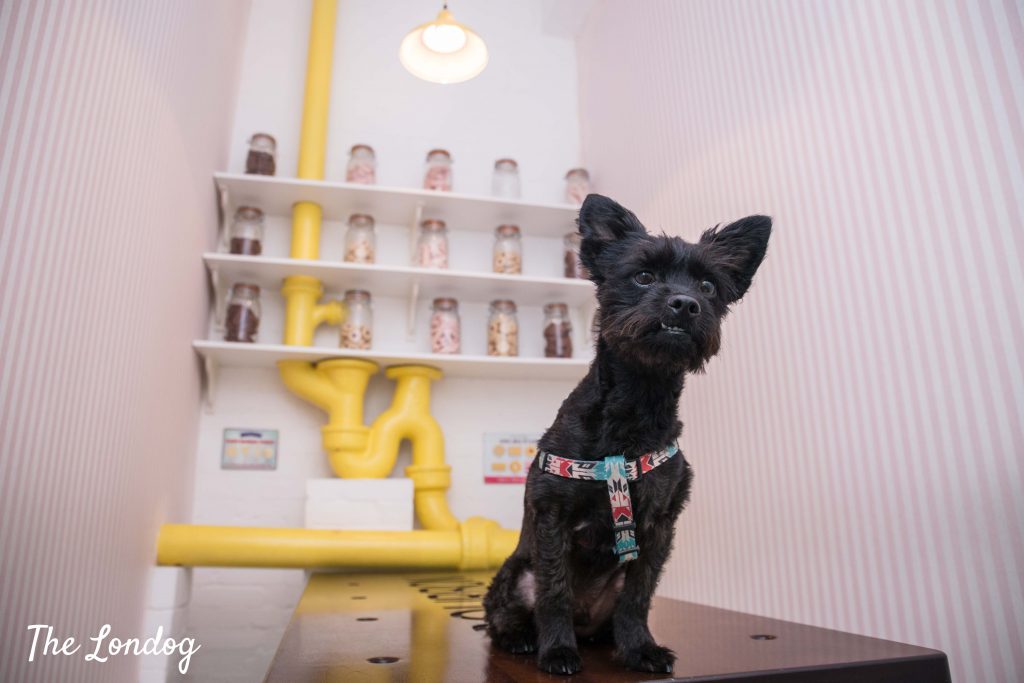 Rico is fiveish-year-old rescue dog originally hailing from Southern California. He is a social creature always up for an adventure on his paws or in his backpack exploring the countryside, local parks or dog-friendly pubs.

3 adjectives to define him: Headstrong, Curious, Caring
Likes: To be a part of the action. He has serious FOMO.
Funniest habit: When he is tired of standing or being on the ground he’ll give you a few barks to let you know he’s ready to get in his backpack.
Known for: His distinctive underbite and lazy eye.
If he was a famous character he would be: Jay Gatsby
Nicknames: Rico Suave, BB, Kitty-cat
Quote: “You is kind, you is smart, you is important” 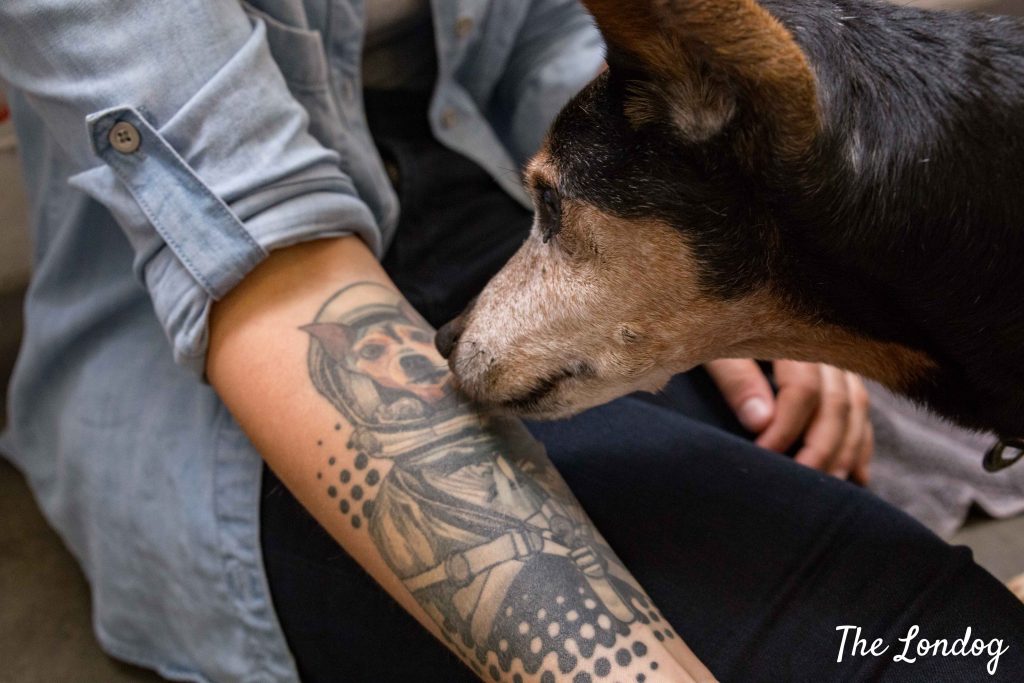 Frank is turning 17 in December and in the words of his own human this is remarkable, shocking, and really quite unbelievable, also considering their move from the US to London last year. “He’s a Miniature Pinscher and before he got this old, he used to be a total weirdo,” says his mum. Frank is incredibly loved and his mum even got a tattoo of him in a spacesuit on her forearm. For his 16th birthday, she also made a 123-page deck chronicling his life up to that point, entitled “Frank Through the Ages”. Remarkable as Frank.

3 adjectives to define him: Old, Charming, Clumsy
Likes: Sleeping and cuddling.
Funniest habit: If you had your feet propped up on something, he used to calmly position his body directly over your feet, stand very still and look away somewhat nonchalantly. Maybe Lecherous and Creepy should be his adjectives?
Known for: Sleeping, falling off curbs, being the oldest dog in the world
If he was a famous character he would be: Al Pacino in Scent Of A Woman…because he’s pretty much blind and I bet he’d shout ‘HOOHA’ and when he isn’t shouting ‘HOOHA’, he’d give wise life lessons to a young Chris O’Donnell.
Nicknames: Frankie, Monkey, Bub(s), Little Man, Baby, Babycakes, Baby Boy, Prince of Darkness
Quote: “Is he breathing? I just want to make sure he’s breathing. Okay, he’s breathing.” 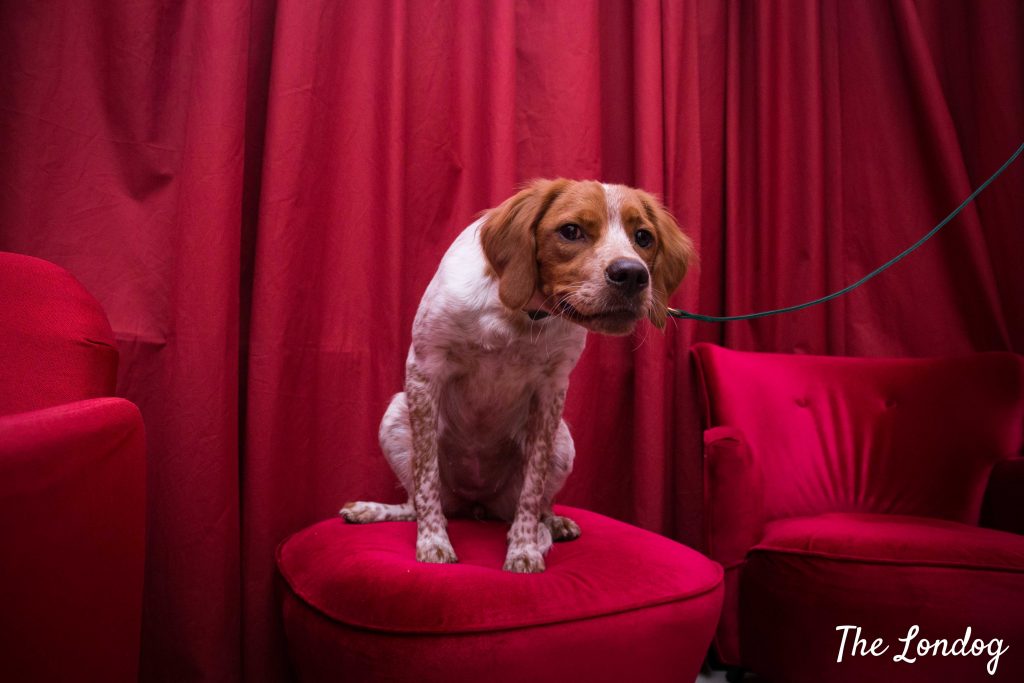 Gertie is an eight-month old Brittany rescue. In her short life she’s travelled from Ireland to England and had a few different owners along the way, some nicer than others, explains her mum. When we met she was able to chew up her brand new leather lead in an amen. “They say that optimistic people are clumsy because they always assume things won’t fall over, and I can confidently say that Gertie must be the most optimistic dog in town.”

3 adjectives to define her: Clumsy, Comical, Sweet
Likes: Ripping up Amazon boxes
Eats: Amazon boxes
Funniest habit: A commando drag – Lying on her stomach with her back legs spread like a frog then dragging her belly towards you.
Known for: Crossing her front legs while laying down. She’s a clutz, but a fancy clutz.
Walking into poles and misjudging jumps (she’s still a puppy) but somehow looking quite elegant while doing it.
If they were a famous character, she would be: Buddy the Elf
Nickname: Child
Her bestie in the office: Friday 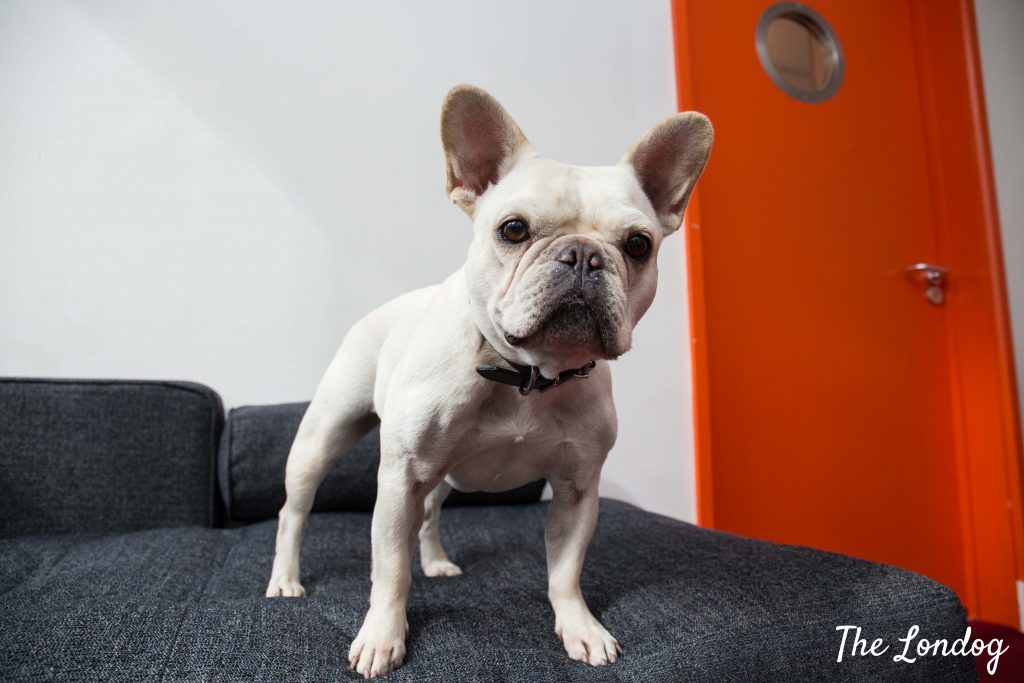 Beans is a cuddly but stubborn French Bulldog with a heart of gold and pecs of steel as her human puts it. She is a well-travelled dog, who was born in London (Ontario) three years ago and has since lived in Toronto, Vienna, and London (England). When she isn’t munching on kibble she likes to snack on really anything inedible— her recent favourite is crew socks. She sleeps approximately 90% of the time. When she isn’t sleeping you can find her somewhere not responding to her name, because after three years she still hasn’t learned it.

3 adjectives to describe her: Gassy, Gassy, Gassy
Likes: Sitting on strangers’ feet on the train
Funniest habit: Smiling when she’s uncomfortable, which people find very confusing
Known for: Around the office she’s known for her ability to clear desks with her farts.
If they were a famous character, who would they be? Sleepy from the seven dwarfs
Quote: “Beans, Beans the musical fruit. The more you eat, the more you toot.”

The latest addition to the pack is Battersea’s rescue pup Bailey, who became part of W+K’s family just the week after I visited their office. He is an almost a year old youngster, 12.5% Chihuahua, rest Jack Russell and Schnauzer, a super playful, friendly, complete cuddle monster, according to his proud dad! 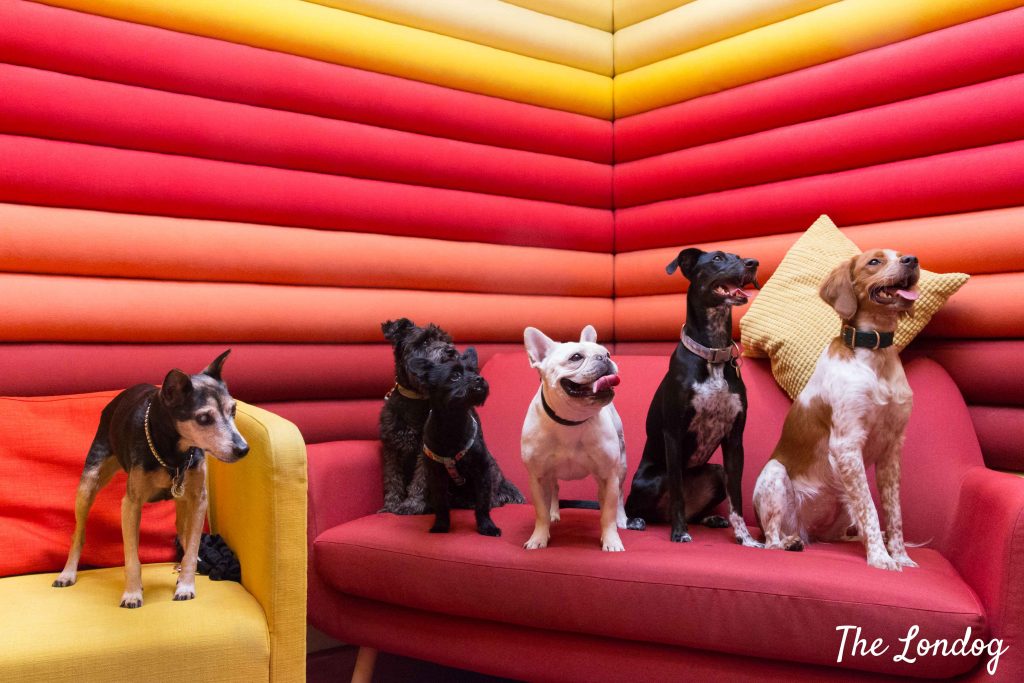 W+K had started being dog-friendly four years ago, introducing dog-friendly Fridays, and turned dog-friendly on a daily basis for the last six months. Tash, a very charismatic Jack Russell (who unfortunately wasn’t available for the photoshoot due to prior commitments), and Dolly, the Managing Director’s dog, were the first to take advantage of the pet-friendly policy when it started, and both are still firm favourites, says Kevin. 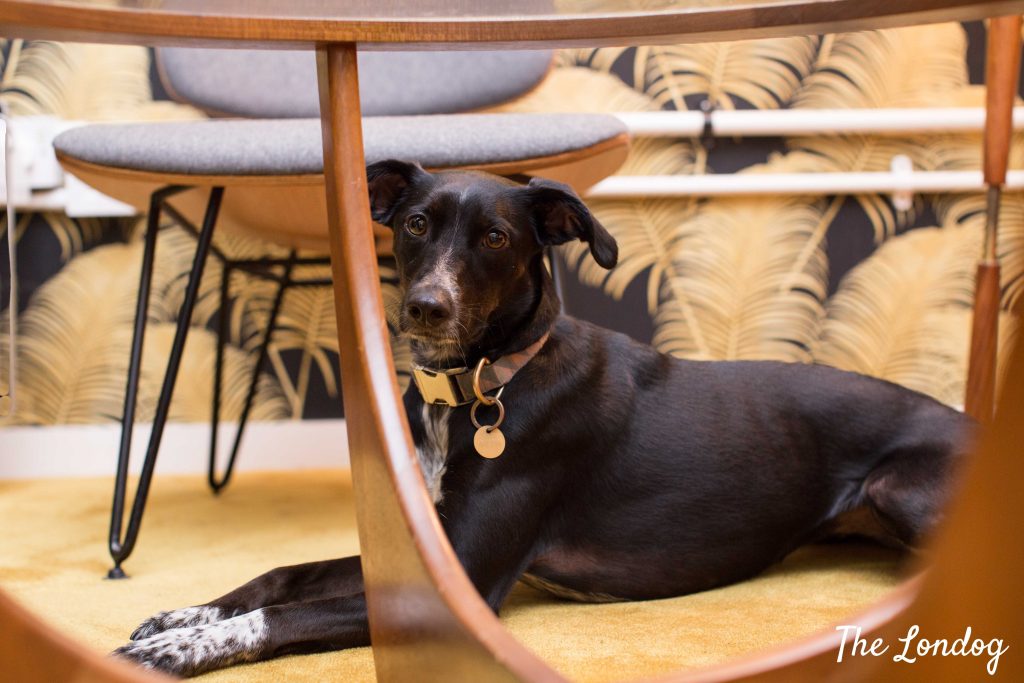 During my visit, I find the office dotted by cool signs informing about dog-friendly and dog-free areas, a very good practice that really gives the measure of the attention placed by W+K on creating a pleasant environment for everyone. “Our main goal with our dog policy is to be welcoming to dogs while being mindful of the work that needs to be done. This starts with respect. Dogs in the office need to be well behaved, always on a lead and ready for a day in the agency,” says Kevin. 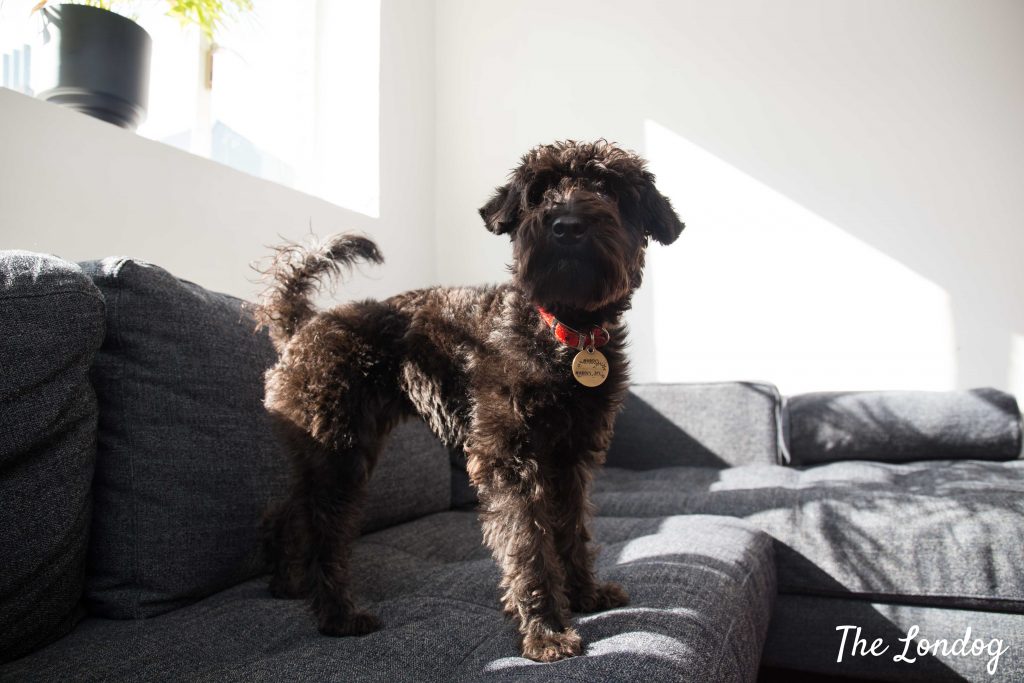 “Just like hiring new Wiedeners, we want to make sure dogs coming into the office are also going to be great members of the W+K family. Recently, we met with Shoreditch Dogs to seek its advice on best practices to better understand how we can make sure that furry friends and humans can share the office in harmony. So far it’s going pawfectly,” he continues. “The biggest perk is the emotional levity they bring to the office. Nothing can make some people happier than a quick cuddle with a pup. For dog owners, it also allows more flexibility in their lives. The challenges centre on adding a layer of chaos to an already brilliantly chaotic place, but we’re well equipped to deal with it!” 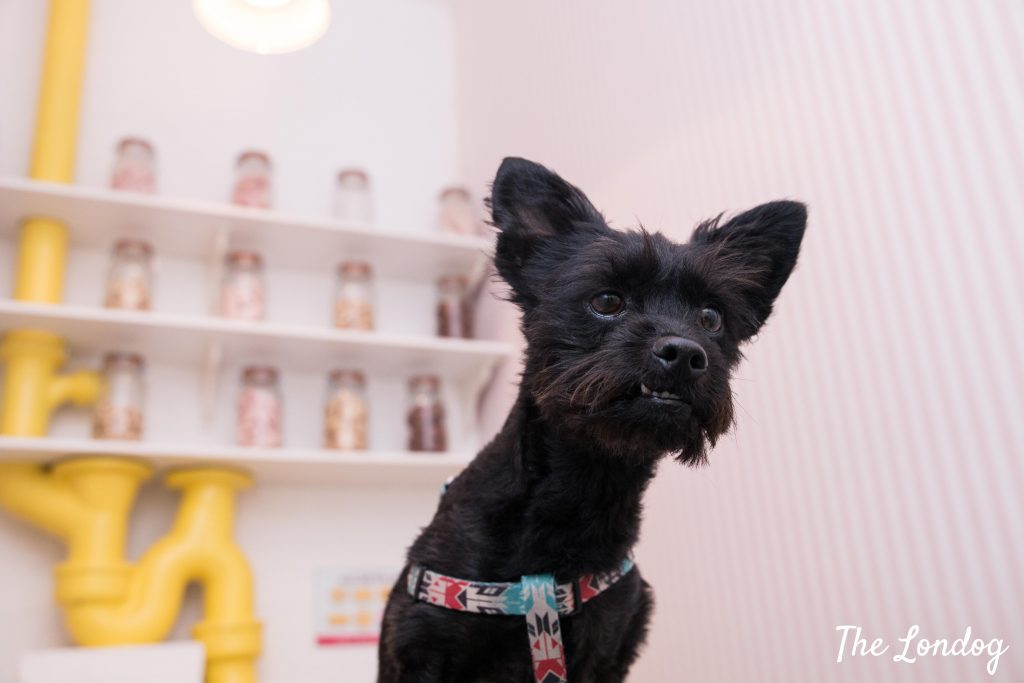