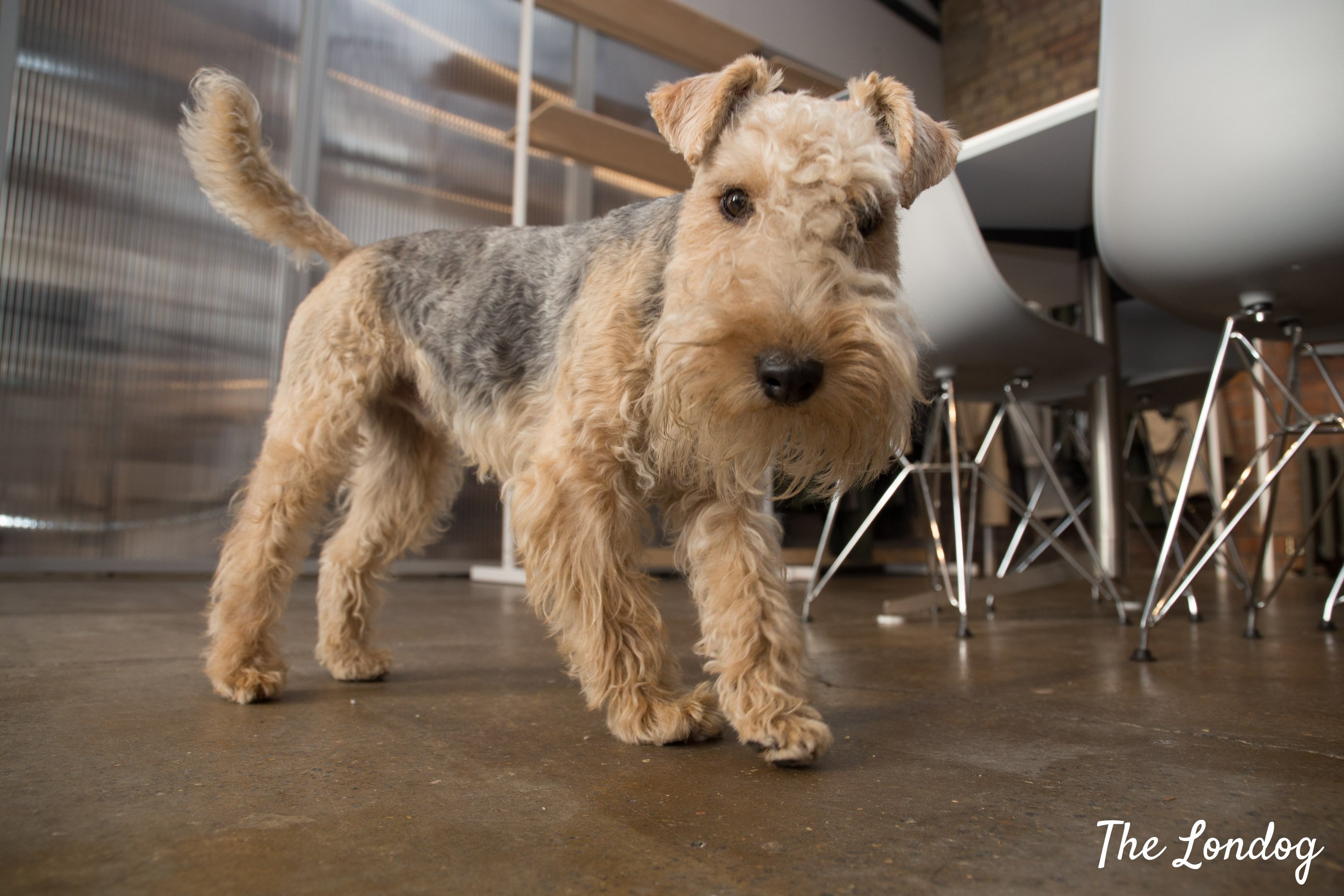 In Hackney Wick, just a stones throw from the River Lee, Danish rainwear company Rains have a spacious and warm showroom/office, steered by three humans and 3 year old Lakeland Terrier, Paul. A happy chap who was adopted by Iain and Hannah as a puppy, after a year-long search. Today we talk about Paul’s office dog life at Rains, the second story in this 13th edition of the Office Dog Series.

Paul the office dog at Rains 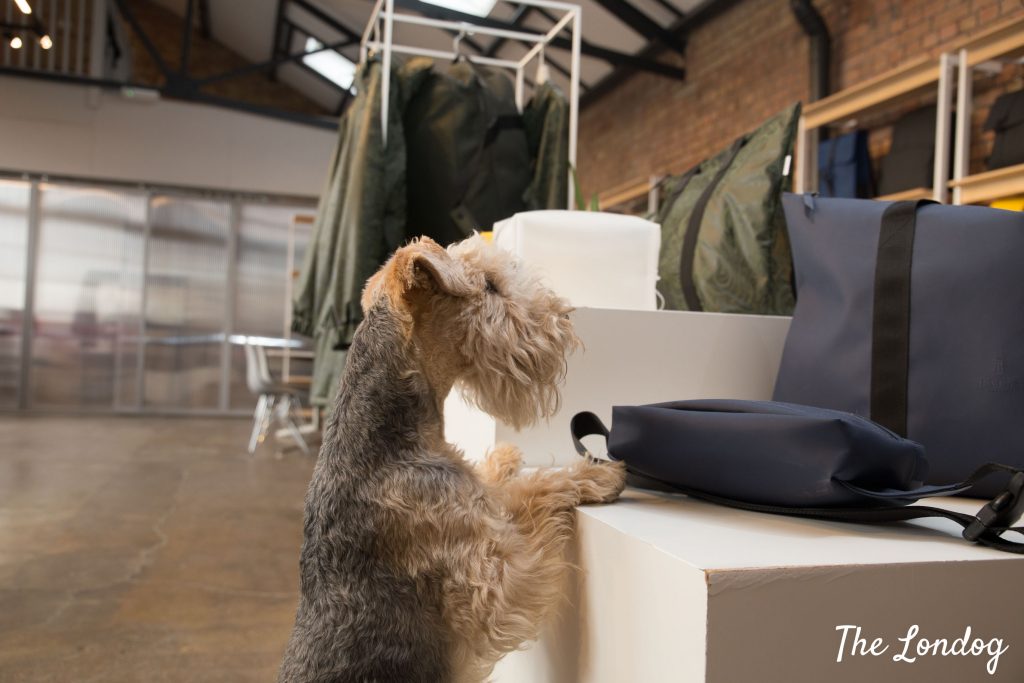 Paul has been lucky enough to be a “working dog” since the day he was adopted. At the time, Iain used to run a shop, so Paul spent time there as a puppy. Thinking back to the day they got Paul, “He was a great way to beat the holiday blues,” remembers Iain. “We had spent a long time looking for the right breeder and puppy and picked Paul up severely jet lagged on their way back from a trip to America”. They have been overjoyed ever since.

“Paul is a tenacious, independent and stubborn boy and certainly knows his own mind. But he loves to play above everything else and you’ll be sure to find a toy at your feet within minutes of walking through the door. His breed isn’t known for great affection, so when he snuggles in on the couch, you know you’re in his good books!”, says Iain. Paul – or Paul Barker as he’s formally known – is always called by his first name, as Iain notes that it’s already unique enough in itself and so he doesn’t need any nicknames. “Although when you shout it in the park you can turn a few human heads.”

Paul is also known for…

Loving: Fetching balls, chasing squirrels, mud, sweet potato chews, sniffing out a hidden toy, long walks
Hating: Fireworks and CATS!…also getting out of bed.
Funniest habit: Sleeping upside down with his head hanging over the edge of something or When he greets you after you’ve been out of the house. He’s just so excited to see you and it often takes about 5 minutes to get past the front door from all the licks.

Most annoying habit: Burying disgusting parts of animals under your pillow!
Most famous/infamous episode: On Christmas day Paul managed to get a pot of paint out of gift someone had been given. He proceeded to chew it – leaking bright yellow paint all over himself and a brand new carpet – it’s since had to be replaced…

A typical day as office dog for Paul 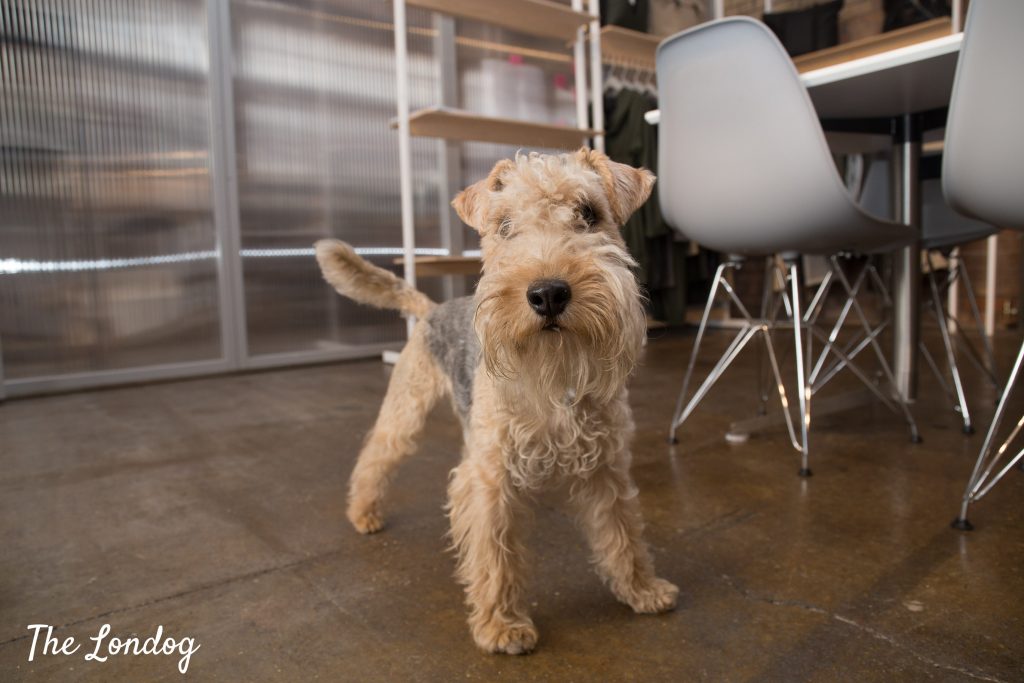 When I visit Rains’ office, I find Paul playing with a green ball and trotting contently around the office. The showroom is bright and spacious with brick walls and concrete floors. It has a trendy vibe, enhanced by the warm light of the sunny afternoon. Iain explains that the building is grade II listed and a former book factory. There are waterproof jackets hanging from racks and bags on pedestals in a perfectly designed and arranged space. There’s a couch and coffee table to one side, with the desks sitting behind a sliding clear partition wall.

Paul keeps chasing that little green ball, which turns out to be a rubber sprout. As he patiently waits for the next throw, Hannah explains to me that Paul’s tail was broken when he was still with his litter. “His tail doesn’t wag like other dogs. Once you know him and you start to see a little wiggle you know that he’s seriously happy to see you,” adds Iain. 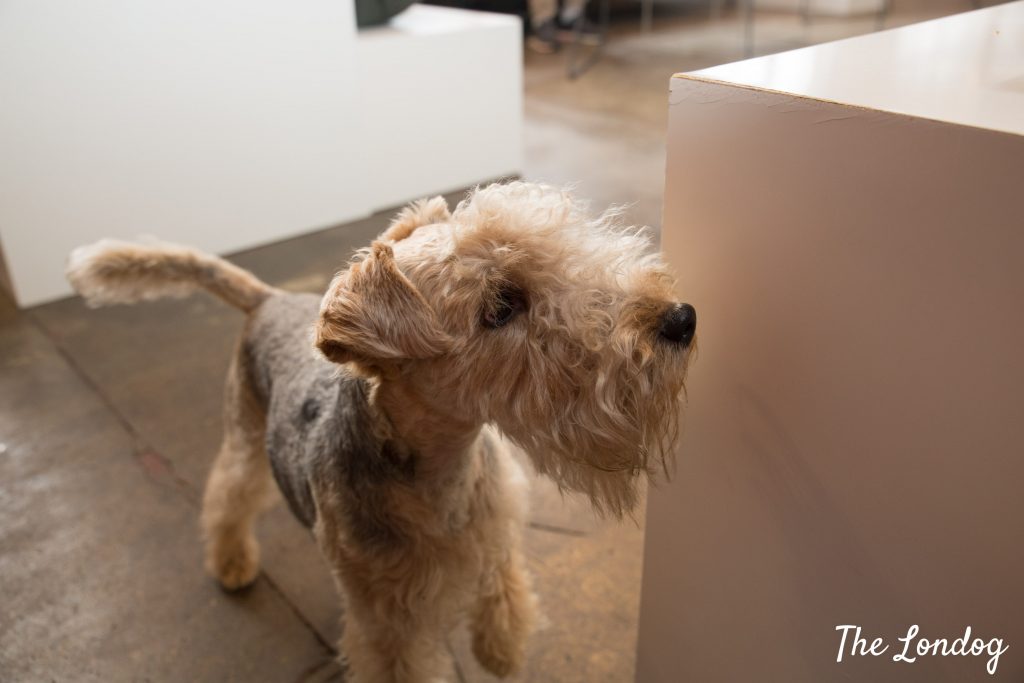 As for many office dogs, the ritual hello and sniff to everyone is a must for Paul as he walks into the office in the morning. After that, he finds his spot for the morning. “He does have a bed underneath my desk, but likes to experiment on various perches around the office. The mornings are usually a bit more chilled out, Paul is quite a sleepy dog,” recounts Iain.

His hour-long commute probably tires him out, “We split our journeys between cycling and the tube,” explains Iain. “We started using a BuddyRider dog seat on the bike last year. He’s taken a bit of time to get used to it, but is slowly coming around to the idea. It’s quite a nice cycle, jumping into Victoria Park along the way. Paul is a DREAM on the tube, he usually just lies on the floor and goes to sleep.” 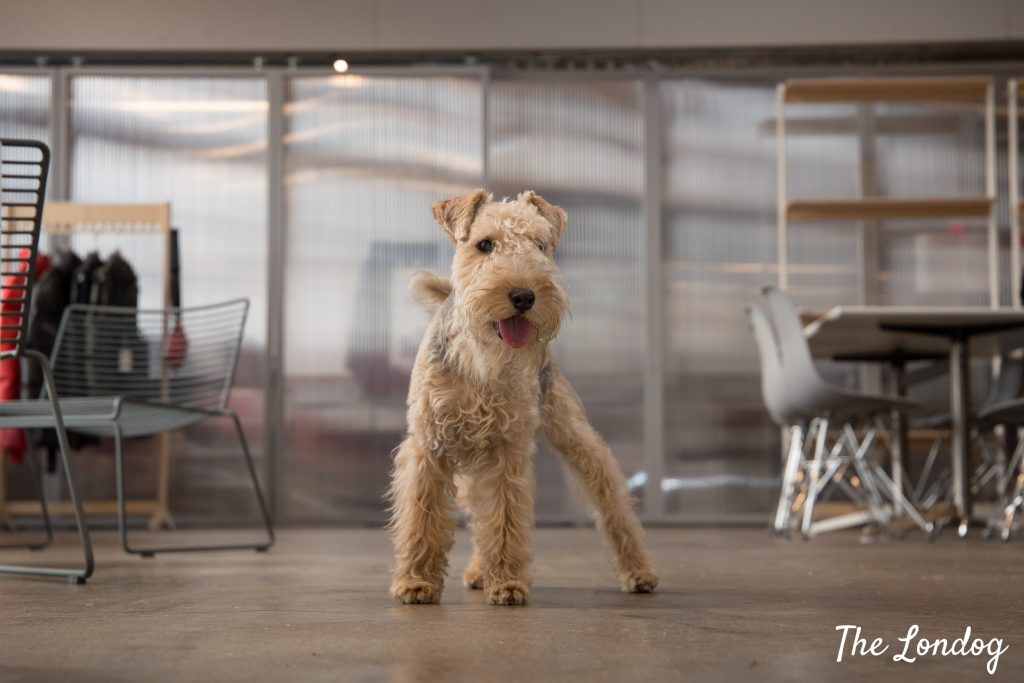 Lunchtime is normally time for a walk for Iain and Paul, “I take him down to the canal for a quick spin where we will usually bump into another couple of doggies,” notes Iain. “I work for a Danish company and everyone eating together is very important, so we try and include Paul in that and all eat at the same time. He’ll snaffle down a bowl of food and then it’s time to do some playing.”

“Paul is a lot more active in the afternoon, we have quite a lot of appointments that come and visit us in the office so there is always someone to throw a ball for him,” says Iain. “Usually around 3pm we’ll go out for another walk and a wee. Usually by this point he’s played out – he’ll often go and grab a chew and take himself off for some ‘Paul time’ – he will happily spend a good hour chomping on a moon bone!”

Paul’s impact on the work environment 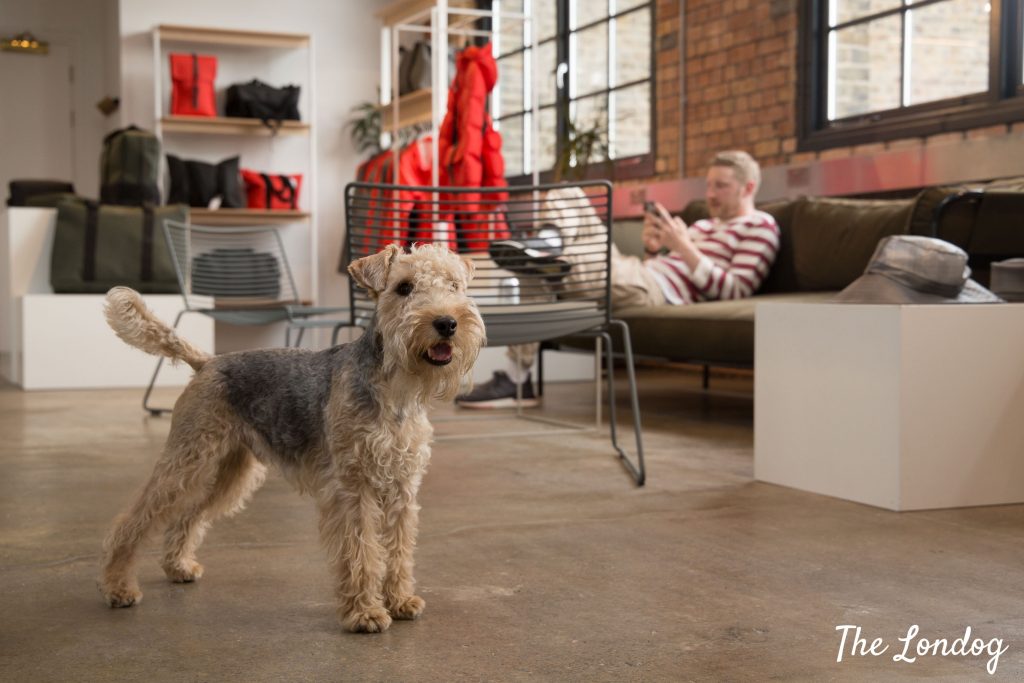 At Rains, Paul is a very popular member of the Team. “Probably more popular than me. When I first started, I was ‘the guy with the cute dog’,” laughs Iain. “He brings a positive and calming atmosphere to the office. It is a lot harder to get stressed when you have a dog curled up on your lap. I think Paul is a trail blazer in this area, he is the company’s first dog but has received high praise so far. He has had sleep overs at a few of my colleagues’ houses whilst we have been away so I guess they like having him around! And walking a dog is an incredible stress relief so can only be beneficial to have him around in the office.”

As a showroom, Rains’ London office often gets clients visiting the space. “He’s a great ice-breaker,” adds Iain, “when clients come for the first time to this space and also find we have a dog, it’s like stepping into someone’s home, he takes the formality out of situations just by trotting around and being himself.” 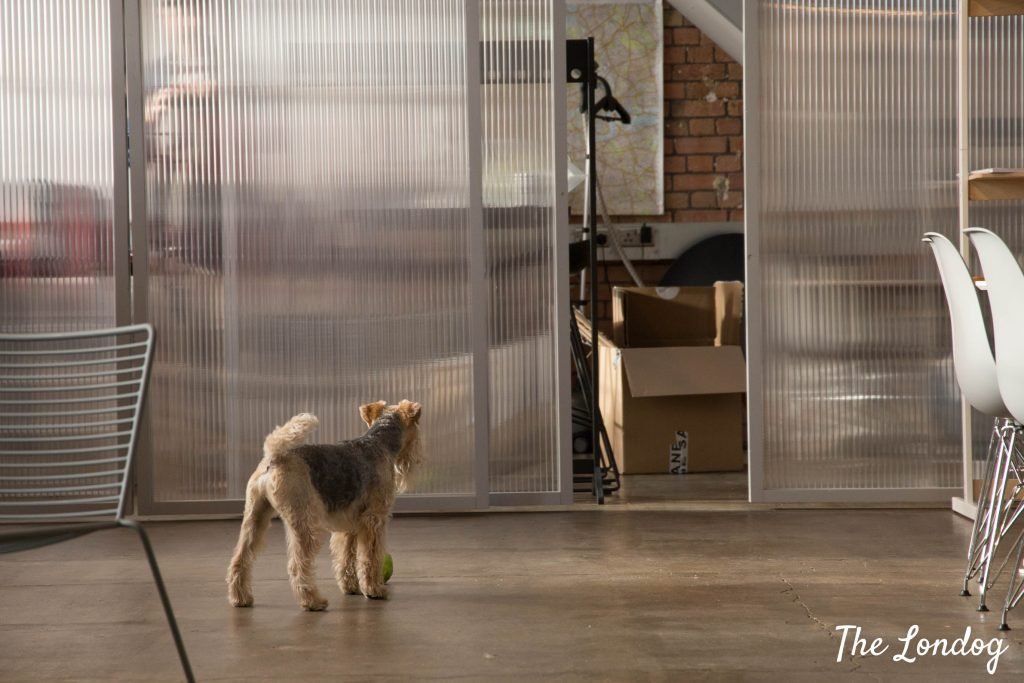 Funnily enough, as I see Paul behaving so well at Rains, being so quiet and happy, Hannah explains to me that she can’t take him to her workplace in Central London because he causes too much mischief. “He can be a massive pain in the arse [there]! He sees Hannah’s office as a place to play because when he was a puppy that’s all her colleagues did with him, so when he goes there he doesn’t settle,” says Iain.

It seems that Paul has a well-oiled routine at the Rains office. Early on, he had a few teething problems, mainly around barking, recalls Iain. “I think that this was caused more by the change of being in a new space – different noises, smells, people. We got a dog trainer to help calm him down which really helped… although we still haven’t mastered how to get him to stop barking at the door bell!” 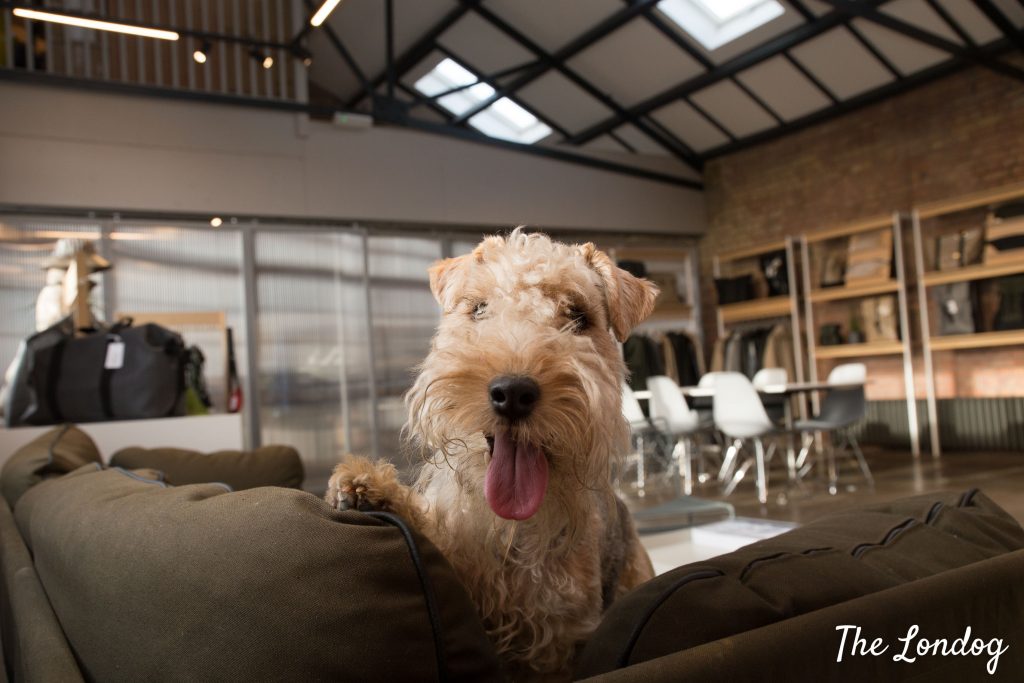 After work, Iain and Paul like exploring the area. “Like everywhere, the winter can be pretty dreary, but we are in a great spot nestled between Victoria Park and Queen Elizabeth Park near Hackney Wick. In the summer its really easy to jump into the parks and have a good run around before heading home. For a longer walk we are a stones throw away from Lee River which is a really nice walk along the water,” says Iain.

There are also plenty of choices for dog-friendly places nearby for a drink after work. “Most of the pubs around here are very dog friendly, the Beer Merchants Tap on Wallis Road is a great place to stop if you are in the area, you can grab a complimentary doggy biscuits along with your craft beer!” notes Iain. 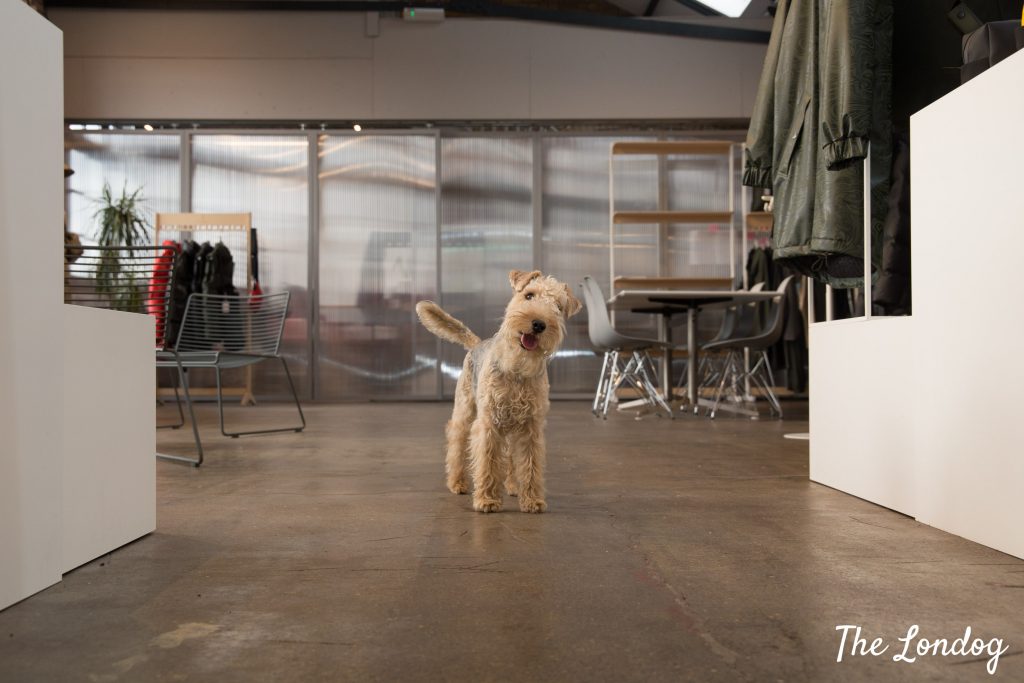 Talking about dos and don’t for a good office dog environment, Iain gives his tips: