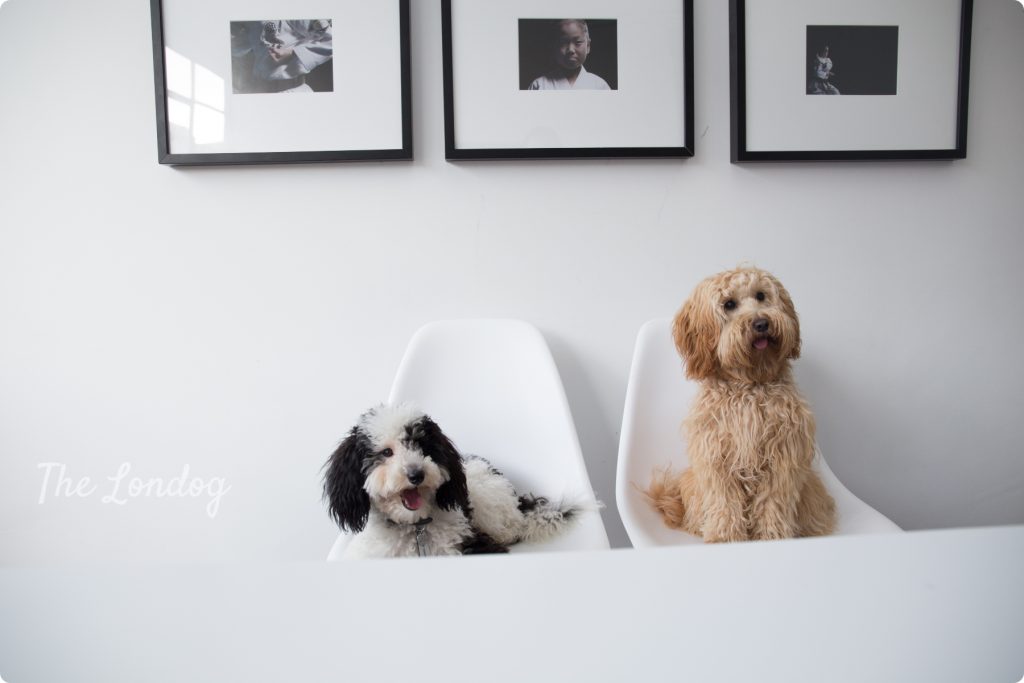 To conclude this edition of the Office Dog Series we have a terrific office dog pack, that of Just So. Rosa the Standard Poodle, Edie the Miniature Poodle, Alba the Cockapoo and Buddy the Cocker Spaniel are in charge of canine affairs at Just So’s Shoreditch HQ.

The dogs of Just So 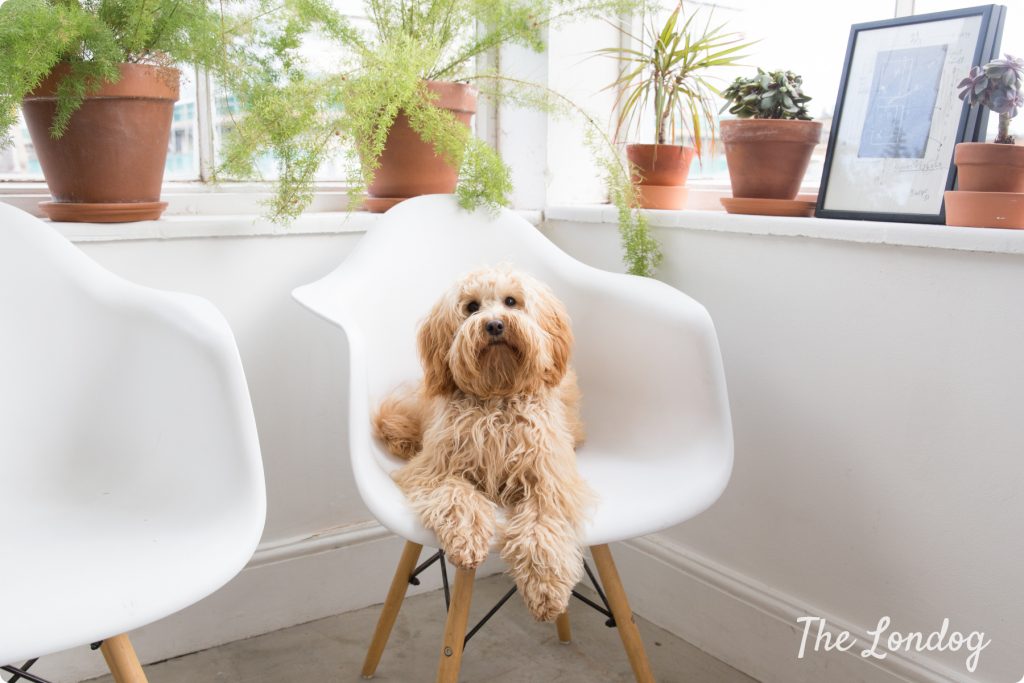 Alba Rose is a six-month old, red, first generation backbred Cockapoo from Grimsby. She is good natured, playful and ditzy, and goes by the nicknames of Albs and Fluff Ball. Indeed, Tim Flach’s photo of flying Mop Puli dog in his Dog Gods project has nothing on how Alba looks after jumping.

“Alba has always been a good girl, characterful but submissive. She will bound up to any living thing and put her paws in their face (if she can reach up that high)”, said her owner, Ric. “She is most definitely going through adolescence – pushing boundaries, just being plain crazy and staring into the distance as if in her own little world”.

Loves: Playing tug, chasing birds and wriggling around on her back.
Is scared of: the baby gate her owners have at home and hasn’t really figured out the doors on the bus, but didn’t flinch on bonfire night and generally takes most things in her prancing stride. 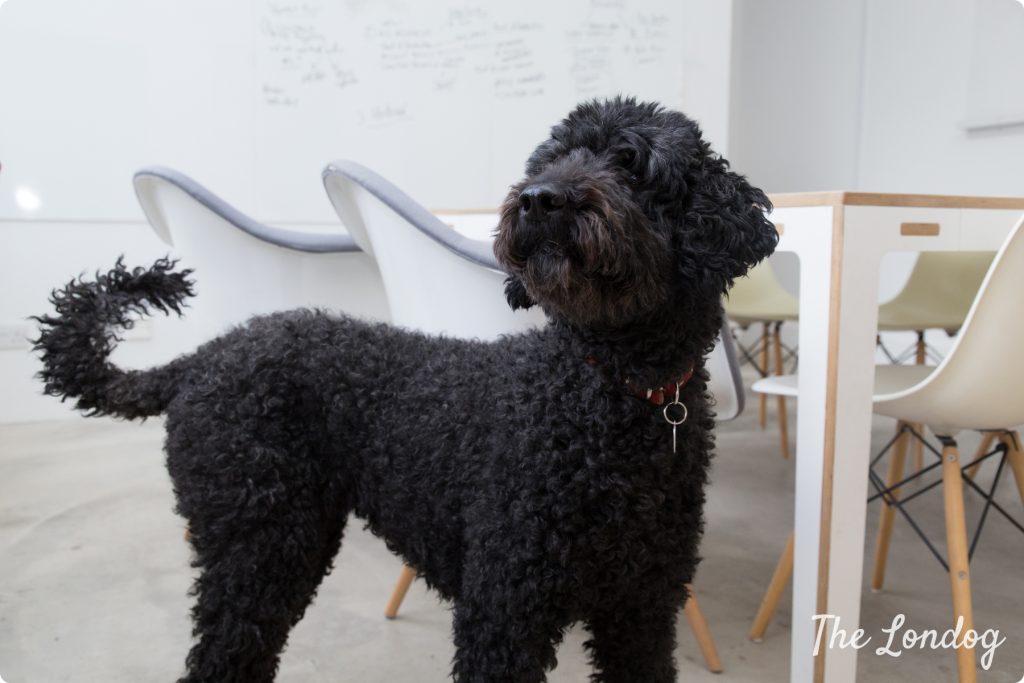 Rosa, the eight-year old Black Standard Poodle, is the Office Queen. She is the oldest of the Just So dog pack  and is described as wise, an attention seeker, and is said never to lose a staring contest. After meeting the small dogs you will find she looks even more majestic. She is slightly ball obsessed and will patiently look at the ball while waiting for you to throw it.

“Rosa was born in 2008 in Sandwich, Kent, when she looked like a little sheep”, said Jess. She then grew up in Brighton and now splits her time between her mum in East London and her dad in Brighton where she spends the school holidays.

Loves: fish, standing on her hind legs on the tube and the Just So office, she is very much a city gal.
Is scared of: boxes. 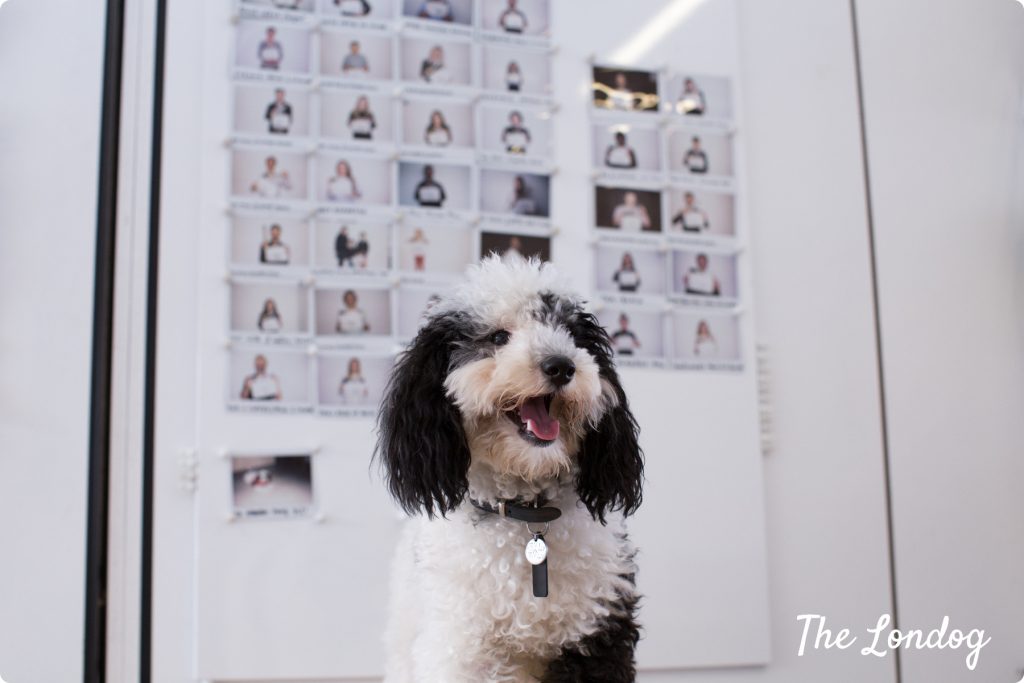 Edie is a seven-month old Miniature Poodle, whose black and white coloured head resembles Cruella de Vil’s hairstyle. Luckily, this is the only characteristic they have in common, since Edie is the sweetest and fluffiest creature on earth. Edie is an easygoing pup and her mum Sophie also explained that although the Kennel Club doesn’t recognise her parti colour, Edie doesn’t mind at all.

Her three main traits are being “sometimes sassy, permanently having the best day of her life because she’s so thrilled and, if she doesn’t agree with what you’re asking, stubborn”.

“She does not have a specific job title, but she tells her doggo friends that she works in advertising”, added Sophie. Edie believes that she is a human being and thus “prefers to have her own chair in meetings”.

Loves: tissues and squeaky toys, and will do anything for peanut butter. Dislikes: ladders and tape measures.
If she were a pop culture character, she would be Tweety bird.

Buddy the Cocker Spaniel, who I didn’t have the pleasure to meet since he was at “boarding school” in Scotland, completes the pack. The team describes him as friendly, frenzied and indefatigable and says that no matter how fast or far he runs he never tires and LOVES carrying things ALL the time. If he was a fictional character he would be Dogtanian, the cartoon dog character based on D’Artagnan from Dumas’ swashbuckling epic. 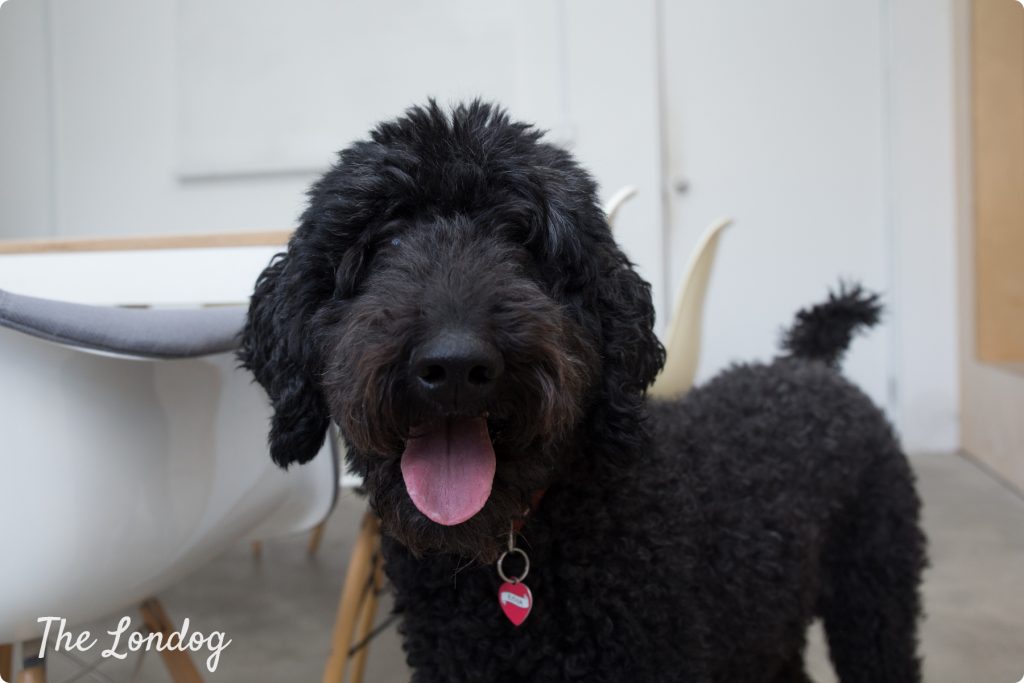 In the office kitchen, there is a magnetic board with polaroids pinned to it portraying each member of the team. On the white frame of each photo there is a food hint written in black marker. The dogs are also featured and Edie’s caption reads No human food pls!

The pink dog team of Just So has some girly dynamics. “Rosa has and always will be the Top Dog. She rules the office and assumes an air of slight indignance when one of the upstarts steals her bed or one of her toys. She loves them really and I think secretly relishes her matriarchal position”, said Jessie.

Her relationship with Edie is dual, explained Sophie. “Edie is the eager year 7 student that is desperate to be friends with the head girl, Rosa. Rosa (understandably) finds it irritating when Edie jumps up in her face, but they share a common love of squeaky toys and are increasingly enjoying spending more peaceful time together as Edie matures.” 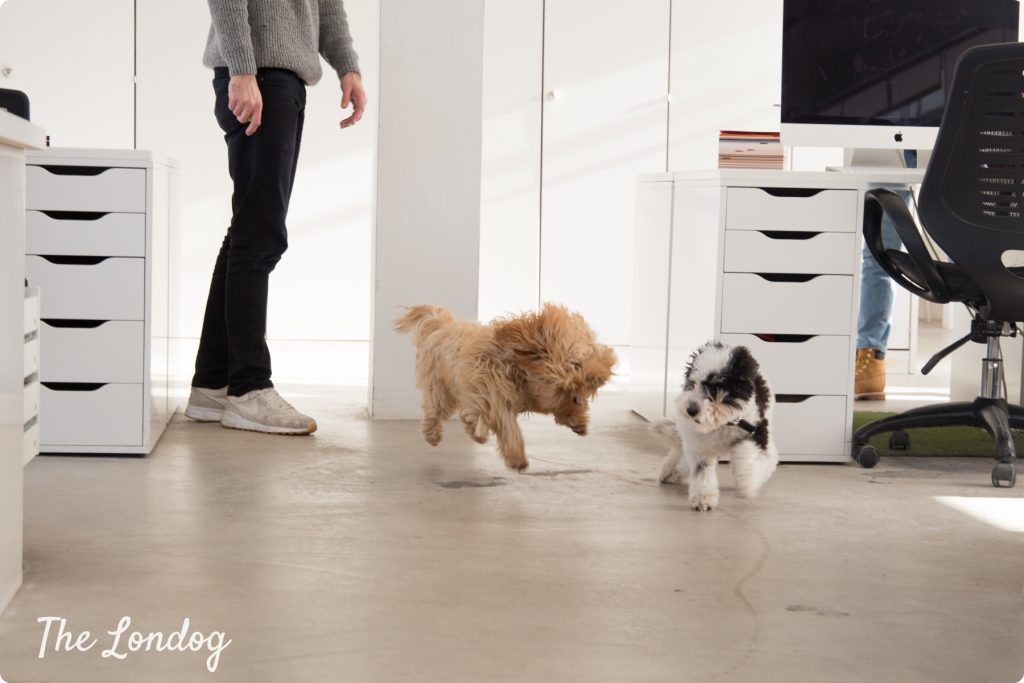 When Alba and Edie are together – which is not that frequently, probably for the office’s sake – they create a little pandemonium, making acrobatic runs through the office. They are the same size, age and have an equivalent amount of explosive energy. It is difficult to describe the scene as they make incredible jumps over and past each other, in a game of tag (you will find a GIF of their runs on our FB page later today). “They first met on a play date out of the office and whenever they see each other now they play fight until one of them drops (usually Alba). The fun can last for literally hours”, said the team.

Edie also likes pestering the other dogs when they are looking too quiet. “Edie enjoys Buddy the Cocker Spaniel’s company but they can’t play together as easily, as Buddy is a lot heavier than her. She still loves him though. Buddy is a little bit like one of the lost boys in Peter Pan (in an endearing way).” 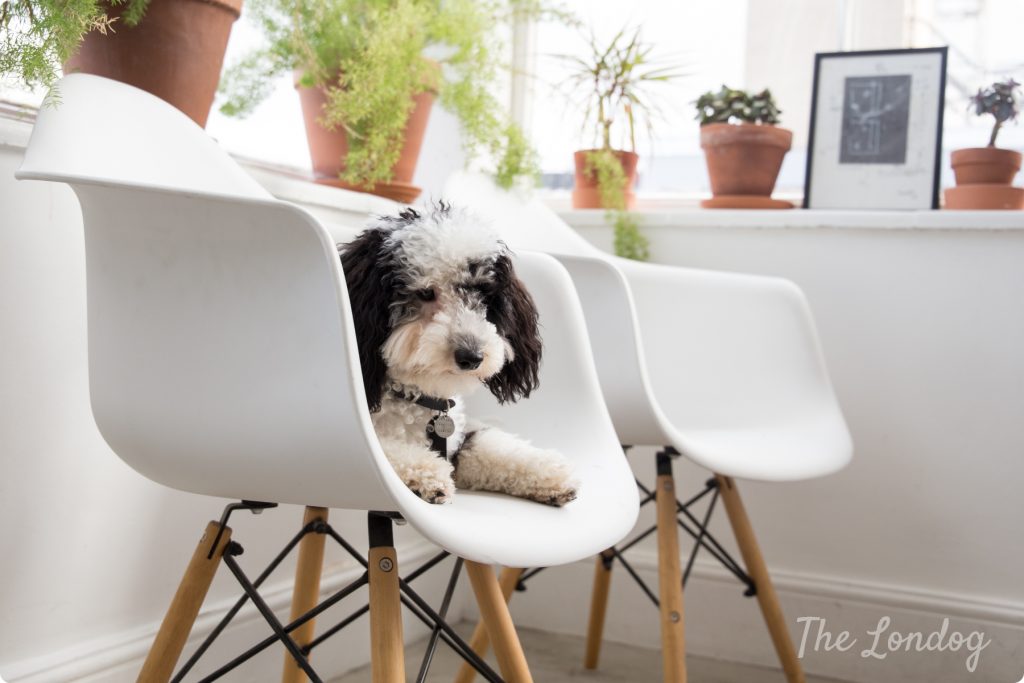 Wall of Shame // Wall of Fame

The office once had some little mice visitors, but the dogs couldn’t be bothered and they had to install mousetraps instead. Getting an office cat wouldn’t have been a feasible plan after all. Apart from their laziness on the mice hunt front, the sorry-not-so-sorry moments in Just So’s canine gang’s adventures include: 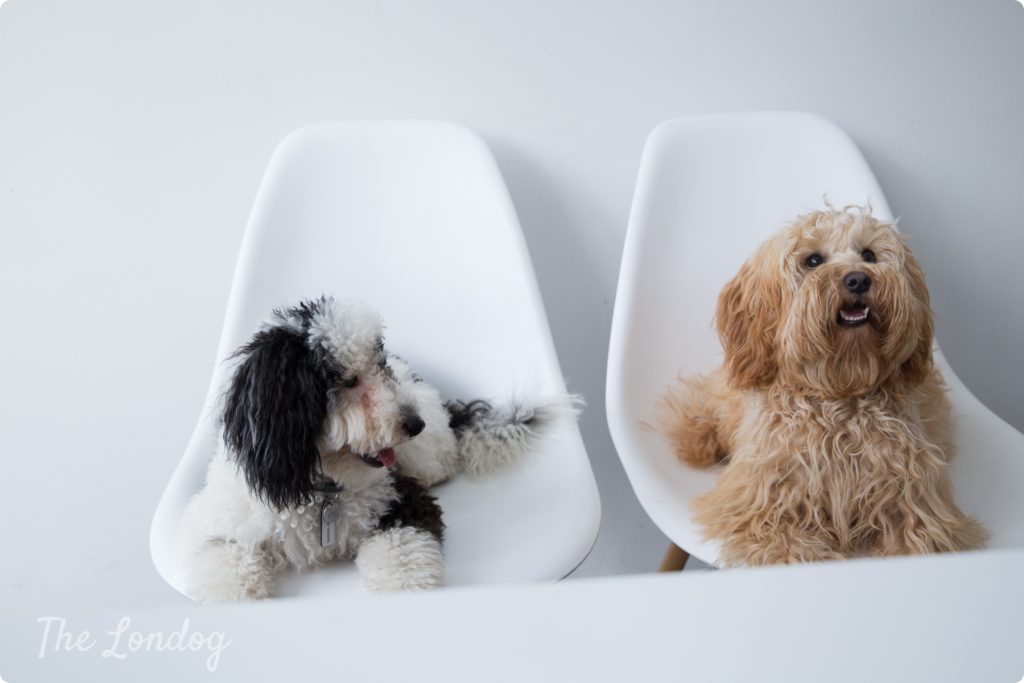 “always evolving, but full of a variety of lovely characters. Having some poodle genetics seems to be a trend. Loving or at least tolerating dogs is an essential characteristic of all who work here!”

Just So Films office dog pack story concludes the seventh edition of the Office Dog Series. Don’t miss the next edition, coming soon in April! Did you enjoy this one? Learn more about the Series and how you can get involved here.