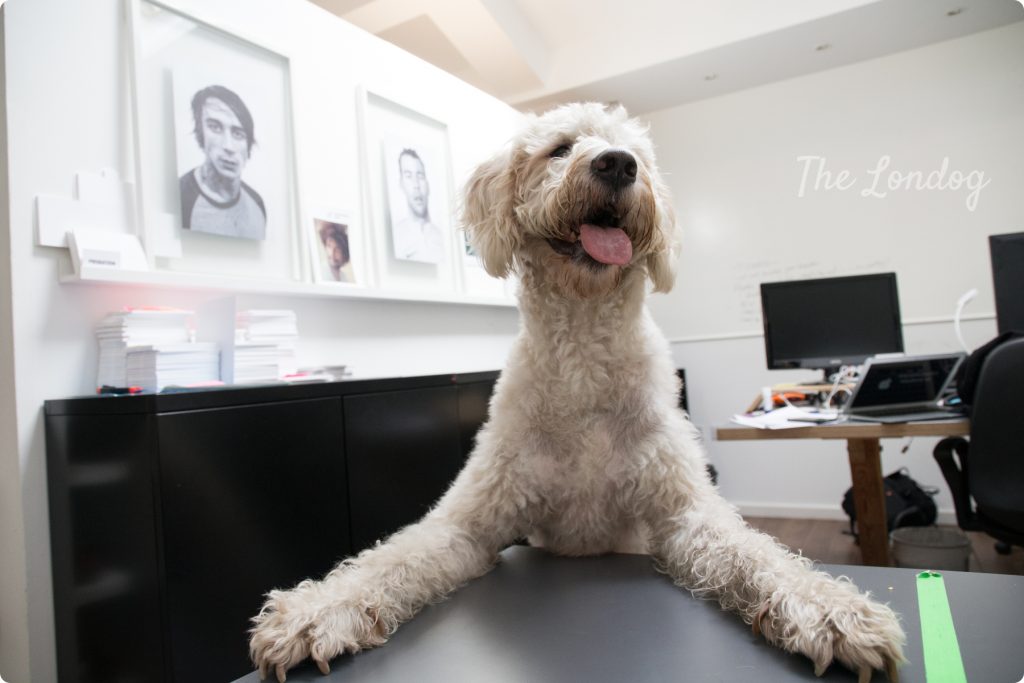 Oslo, the white Labradoodle, is definitely a dog who doesn’t go unnoticed, both for his extra-large size and beautiful looks. The first time I met him at the park he struck me as resembling Falkor – the Neverending Story’s character – for his curly coat and sweet expression; a far more handsome version of it, clearly! He is the resident dog of production agency Mana Media and makes every day at work worthy a comedy show. 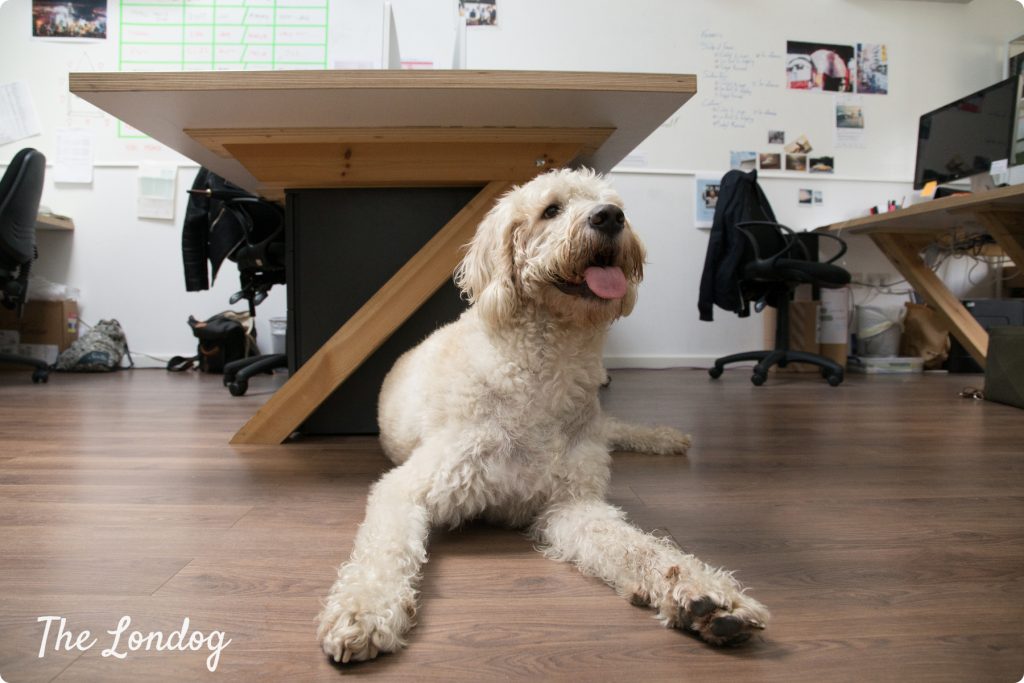 Anyone who meets Oslo inevitably falls in love with him. His secret may be that “He is definitely a human disguised as dog”, as his mum Hayley likes repeating.

Oslo, who also gets to be called Osbro, HEY!, Stinky, Son and Booger, was adopted as a puppy by Hayley and her husband in Oregon, where they were living at the time. “We had been looking everywhere for a pup to adopt but I hadn’t seen one that I instantly connected with. When I saw Oslo’s picture I knew from that moment he was supposed to be ours. The very next day we went and picked him up and our lives from that day forward changed – for the better”, said Hayley. 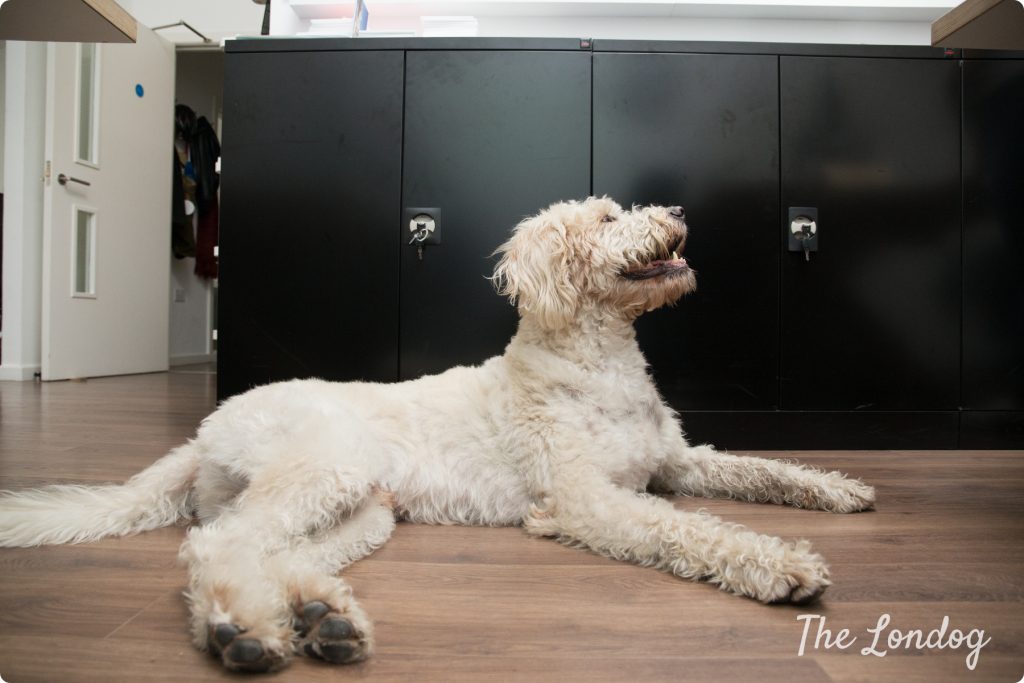 When Hayley’s husband was offered a work transfer to London, in 2017, they packed up and moved to the UK bringing Oslo with them, of course! “I feel he’s adjusted to this new life as a city dog so much better than we have!”, added Hayley.

Until last month, you could see them trotting along in Shoreditch, close to Mana Media’s London office. At the time we speak, after spending one year in Albion, Oslo has flown back to the US, where he is again at Mana Media’s HQ in Portland, Oregon. I was lucky enough to meet and interview them when he was still working as an agency dog in Shoreditch and this is what he has been up to for the last year! 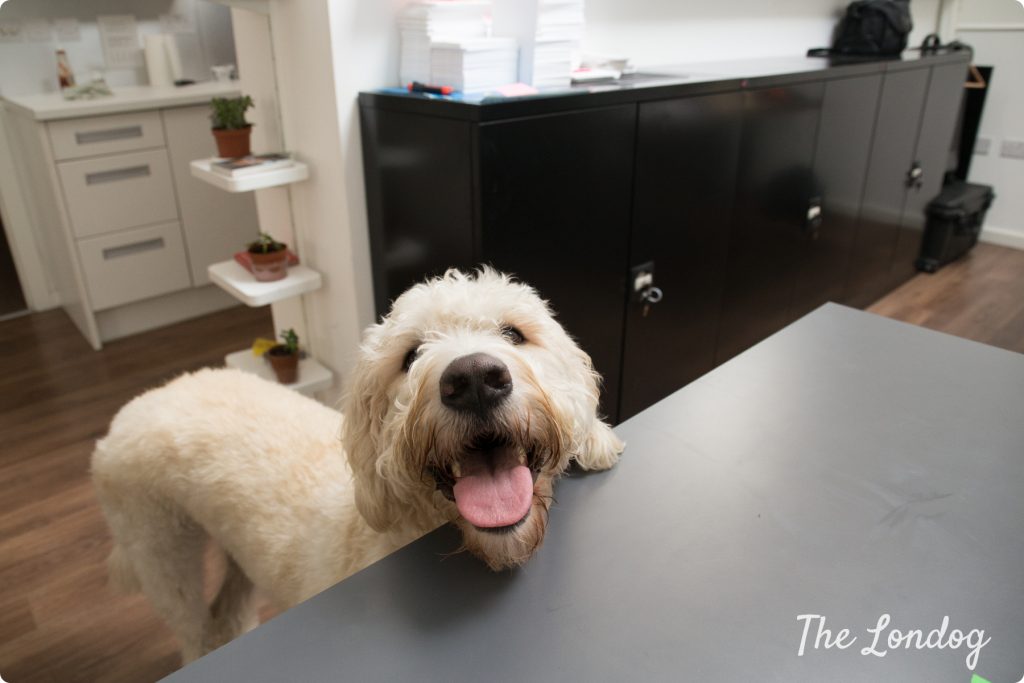 Oslo is also known for…

Loving: Squirrels, chasing every ball that isn’t his.
Hating: When someone doesn’t acknowledge how ridiculously adorable and handsome he is.
Funniest habit: It changes and he has several. This week, he is obsessed with carrying my umbrella in his mouth all the way from my office to home. He’s definitely made an appearance on several strangers Instagram stories this week.
Most annoying habit: Being so awesome, every damn minute of every damn day. Seriously, it’s annoying how I’m not sick of it yet. 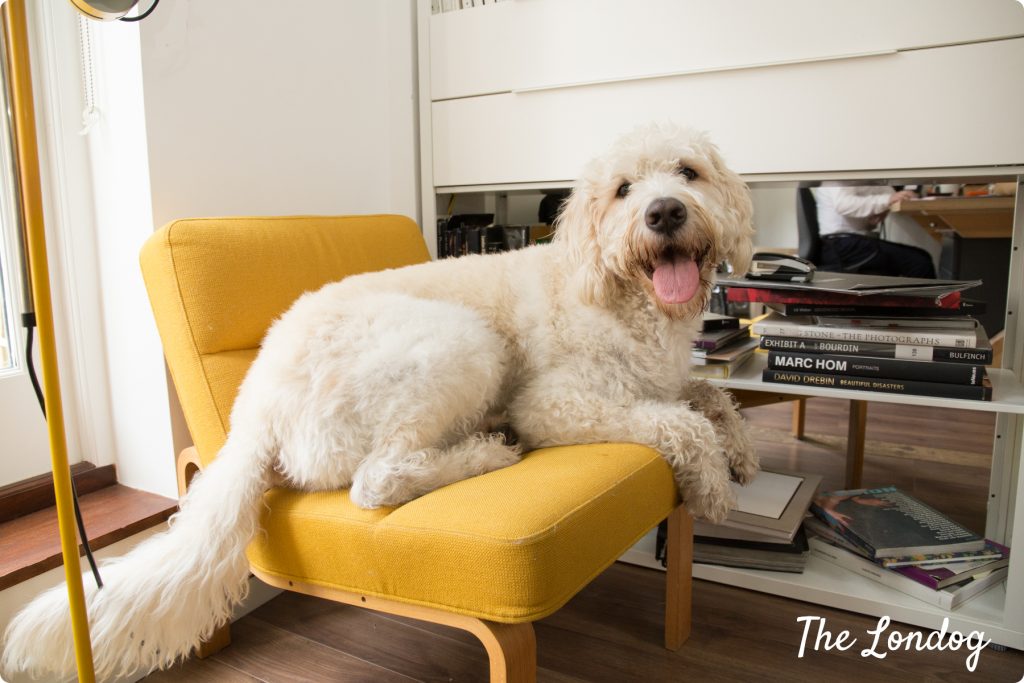 Since the day he was adopted (i.e. for the last two years and a half), Oslo has been going to the office and his days at the agency are never boring. On the contrary, Oslo seems to be always having the best day of his life and to be himself an inexhaustible source of entertainment. I can confirm that his umbrella trick is rather hilarious… on the day we met at the agency he chose a quite expensive and huge one to – not too graciously – carry around the office, before being stopped and having the umbrella taken out of his mouth before getting too slobbery.

In addition, during our photo session he came up with another expedient. He found that posing with his front paws on a desk wasn’t that much fun, while treats were definitely more interesting, so he decided to jump over the desk! Imagine seeing a white huge mass suddenly landing on the table… We all burst out laughing and Hayley had to take him down in her arms (see the photo below). 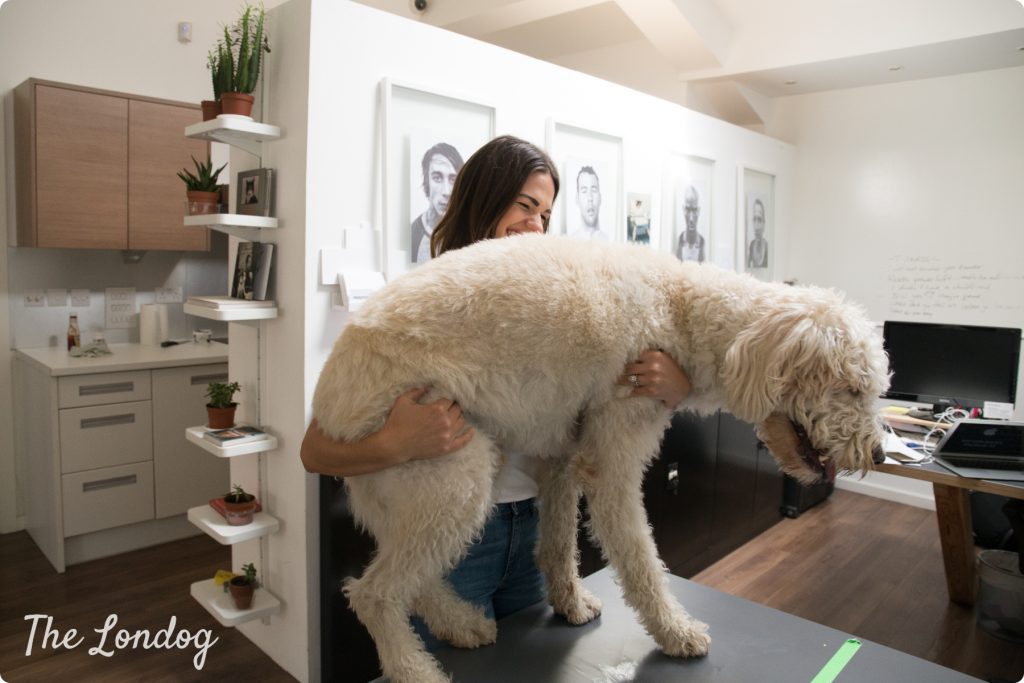 “I promise you, every day he does something ridiculously funny which makes everyone pause and burst out in complete hysteria. What do you expect- he’s a human disguised as a dog, remember!”, chuckled Hayley.

Things that are part of his office routine? “Scaring the delivery men, not on purpose, it’s just he’s massive and no one anticipates a dog like that in such a small office to be waiting at the door. Dragging his blanket into the meeting room while we are having important group discussions, and then proceeding to whimper in his sleep (he’s a BIG sleep talker)”, said Hayley.

“Also, he loves to lay by everyone’s desk and make sure not a single crumb hits the floor while they eat their lunch. He’s literally putting our cleaning lady out of a job”, added Hayley. “Lastly, he loves to slurp his water for an obscene amount of time, like VERY loudly, of course when it’s quiet right in the morning. He absolutely does this on purpose, because he knows how annoying it is. It’s the equivalent of someone who is a loud chewer-bugger!” 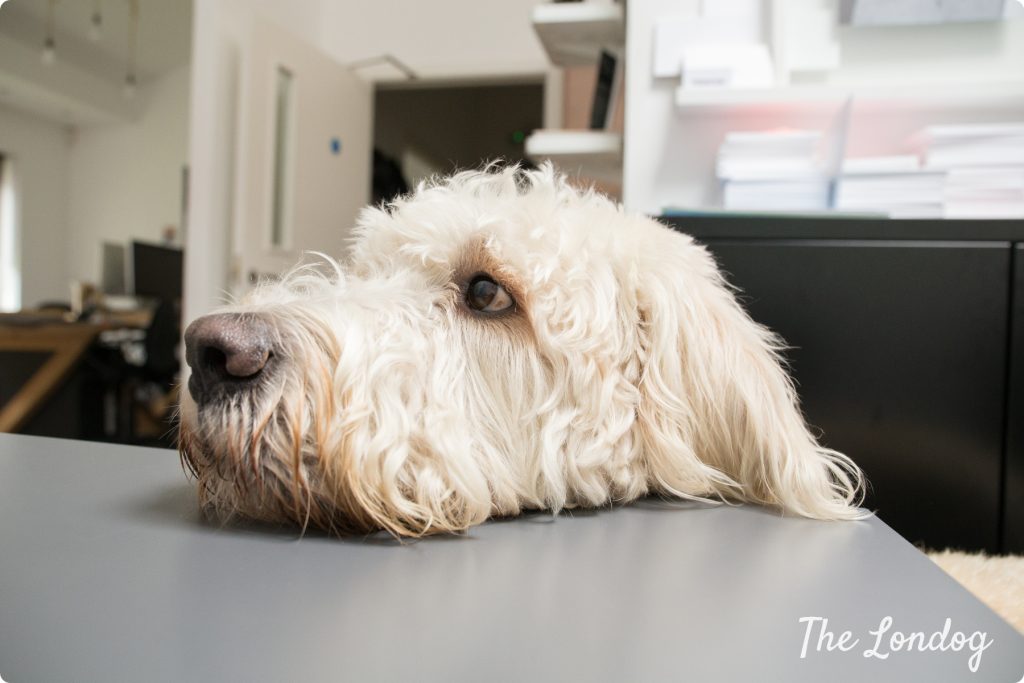 Oslo does a great job to boost the office morale. “I can confidently say he makes everyone’s day go from like a 6 out of a 10, to like a 10 out of 10. He’s better than the funniest YouTube video”, noted Hayley.

So far, he has been the one and only office dog at Mana UK. “I secretly think he wants to keep it that way. I don’t want to say he would sabotage a future employee who has a dog chance of getting a job here, but he absolutely 100% would”, noted Hayley when I met them. Now that they have moved back to the US, there may be room for another four-legged at Mana Media UK – just saying… 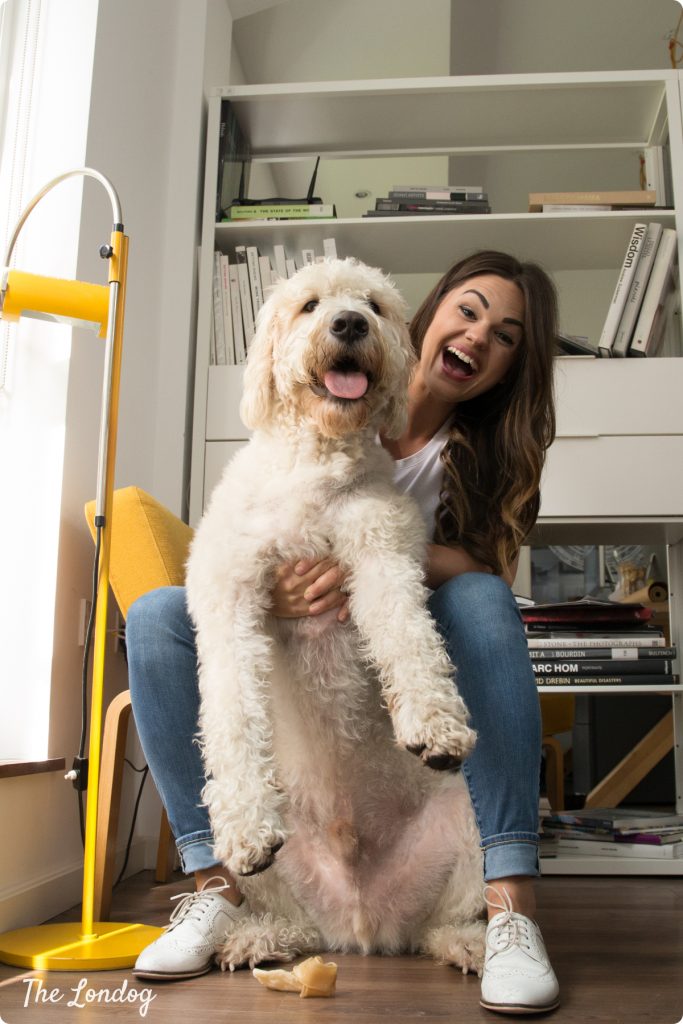 Tomorrow we’ll take you to the theatre to meet the greatest theatre dog, for the second up in this edition of the Office Dog Series… stay tuned, 24:00AM BTS on the blog! In the meantime… can’t wait to learn more about the Series and how you can get involved? Read here.