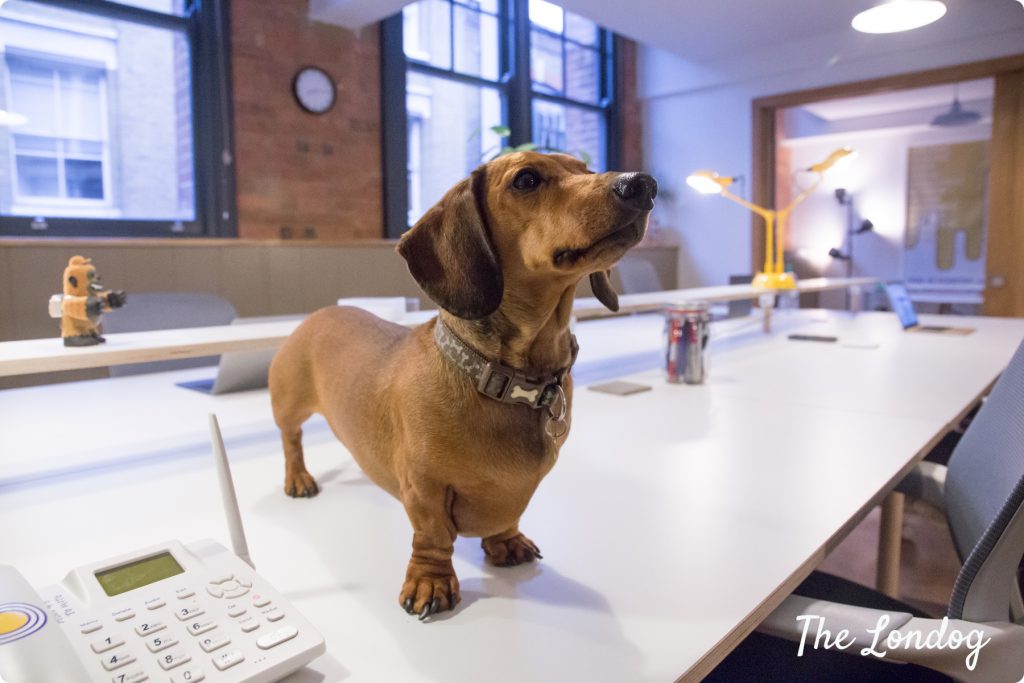 Short-legged, trotting-paced and giggly. Sidney, the sausage dog of Kontor Space, a company providing estate acquisition advice to businesses, has it all. I met him on a rainy day at his new office space in the heart of Shoreditch.

Sidney, the six years old Miniature Dachshund, loves saying hi to anybody coming into the office. His tail mode immediately switches to on and his jogging in the direction of the door resembles that famous futurist painting by Giacomo Balla depicting a walking Dachshund (“Dynamism of a Dog on a Leash“).

“He has a great work ethic and is super friendly to everyone that he meets. He loves nothing more than a productive day in the office finding dog-friendly office space for all his friends”, said Polly.

Kontor Space has just moved offices and therefore Sidney is getting acquainted with the new spaces and hasn’t chosen a favourite spot yet. He feels a bit unsure about the balcony but likes looking outside on the internal courtyard. In general, he is self-confident and seems to have a talent for modelling. Polly confessed that he used to be a bit overweight and has been undergoing a diet, so his modelling fee came as regular breakfast rather than treats on the day of our shoot.

“When Sid is in the office, he is usually on somebody’s lap; fortunately, he’s not fussy whose, as long as he is not being ignored” recounted Polly. “He likes to be first in, in the morning, so he can greet his team at the door as they arrive. When it comes to lunchtime, Sid will join in and help out with the clean up effort. When he needs to take a break from the hustle and bustle of the office, he likes to stroll around Hoxton Square.”

Sid also goes for out-of-the-office meetings. “He comes along to view any new office spaces that are on the market and gives his executive decision, and he also comes for meetings with clients”, Polly noted.

Apparently, he became quite the star in the property world: Polly explained that his appointment at Kontor as CDC (Chief Deal Canine) was announced in Property Week (a property market newspaper) and he has been recognised by the RICS for bringing diversity to the workforce. “His goal for next year is to be shortlisted for Puppy Personality of the Year at the Property Week awards” she added.

Sidney is known as Sidders at the office and, with regard to his role of CDC, Polly explained that “he likes this title as it asserts his authority over the other office dogs”.

Sidney is also known for…

Loving:
His journey to work, as soon as you mention the word work (in no way associated with the word walk) he rushes to the door and can direct you to the correct tube carriage in no time.
Hating:
When he is not allowed in an office, he wants to go everywhere and hates waiting outside!
Funniest habit:
From your lap he likes to take a stroll along the desks to make sure everyone is working hard.
Most annoying habit:
He likes to be as close to your laptop as possible to make sure that every email that is sent out goes past him first.

Famous/infamous situations: “Last summer, we took Sid to have a walk around the new office development in Kings Cross to get his thoughts, he really enjoyed the fountains on Granary Square, but he wasn’t too impressed with the shiny marketing suite and made his thoughts known by leaving a little puddle on the floor.” 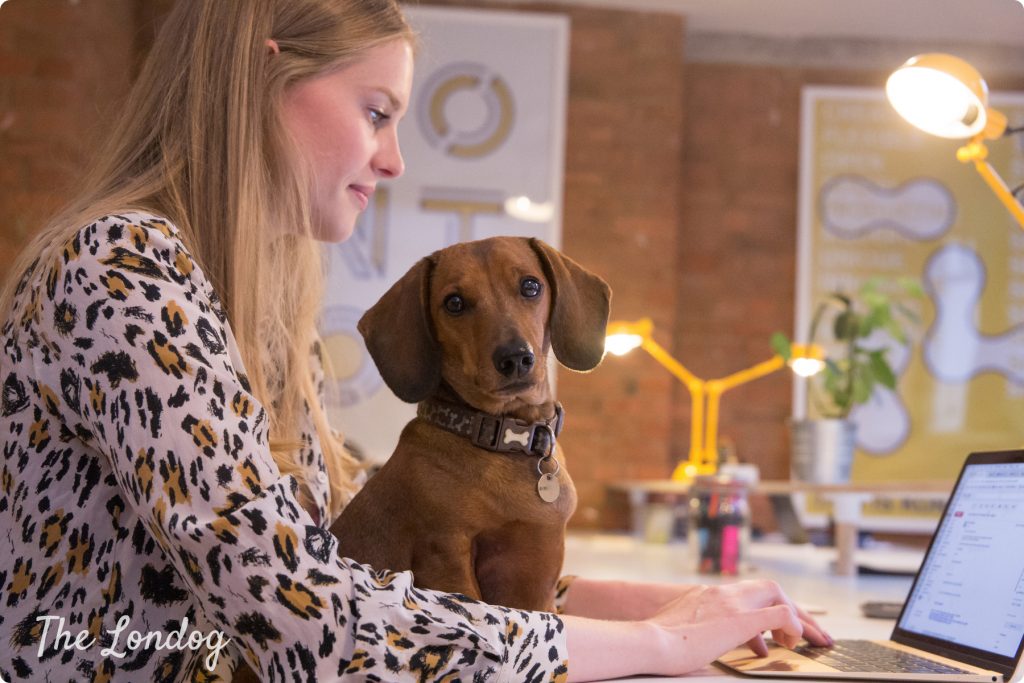 Sidney has some four-legged companions at Kontor Space, who work on a rota. “Sid has been coming into the office for over a year, and for a while, he was the only pup. But word soon got out to the other employees pups that you could get paid in treats for looking cute so we now have two other frequent visitors; Pedro, the two year old Welsh Terrier, and Ruby, the one year old Beagle. They each do their fair share of shifts, but Sid knows he is the boss”.

Sidney is known and loved around the area, and not only in Shoreditch. “He has many fans and is often invited to lunches and parties. He especially likes the lovely folk at Derwent London as they do a lovely bacon breakfast”, Polly clarified. “His most impressive moment was in a lease negotiation meeting between our client and a landlord. We still think to this day that Sids good looks and charm helped us get a better deal on the office and our client was over the moon.” 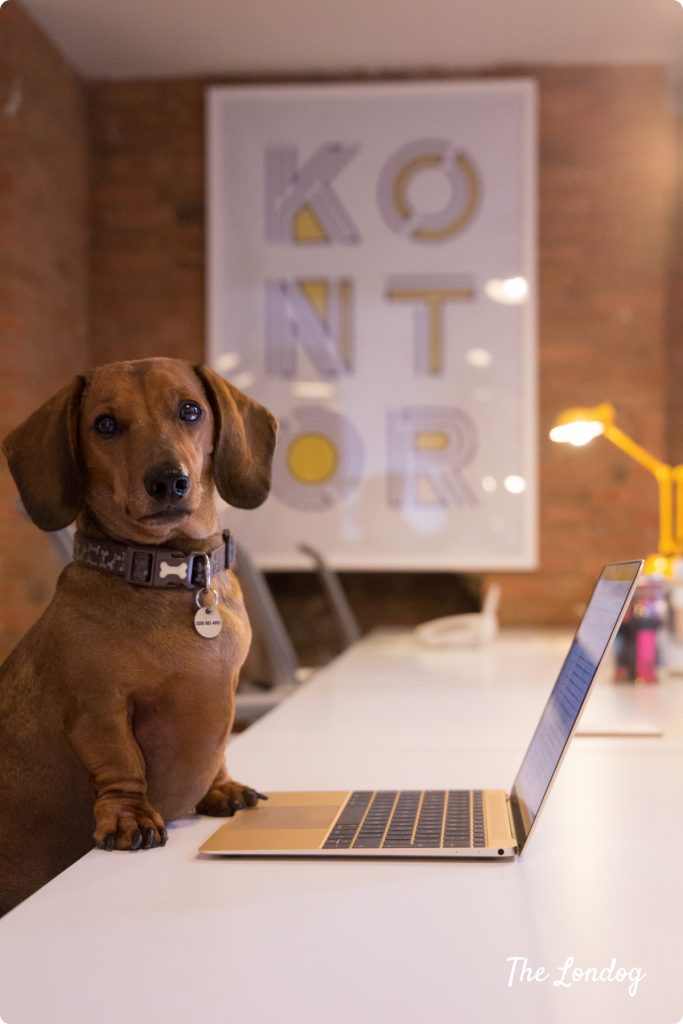