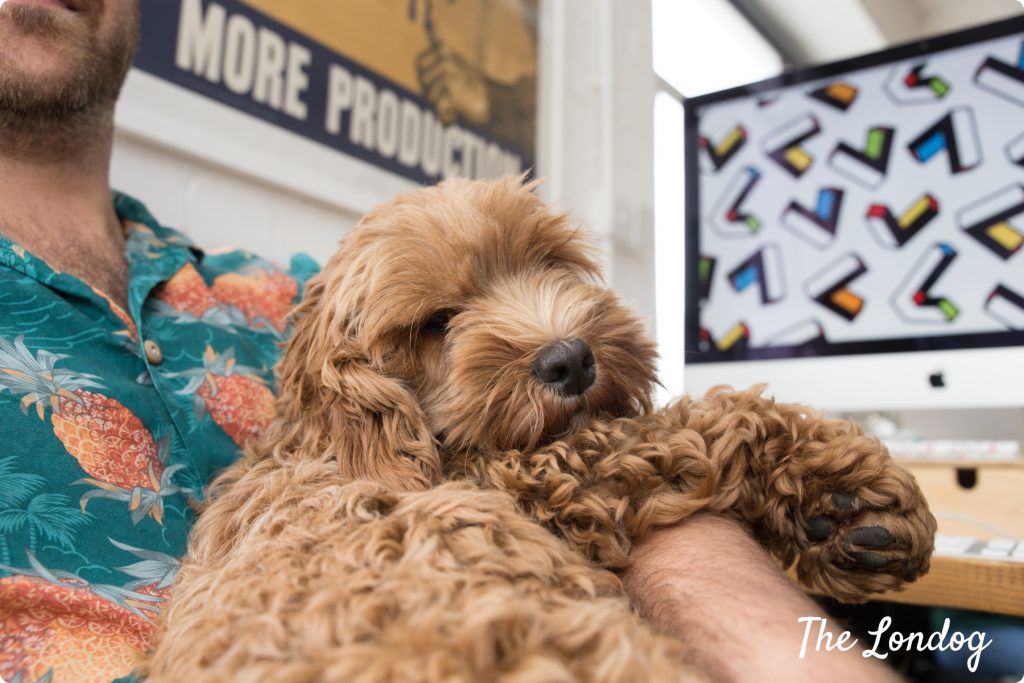 Peanut is the resident office dog at Knock Knock, a film and animation production studio based in Shoreditch, and features as Thursday office hound in this 10th edition of the Office Dog Series. This is her (entertaining) story. 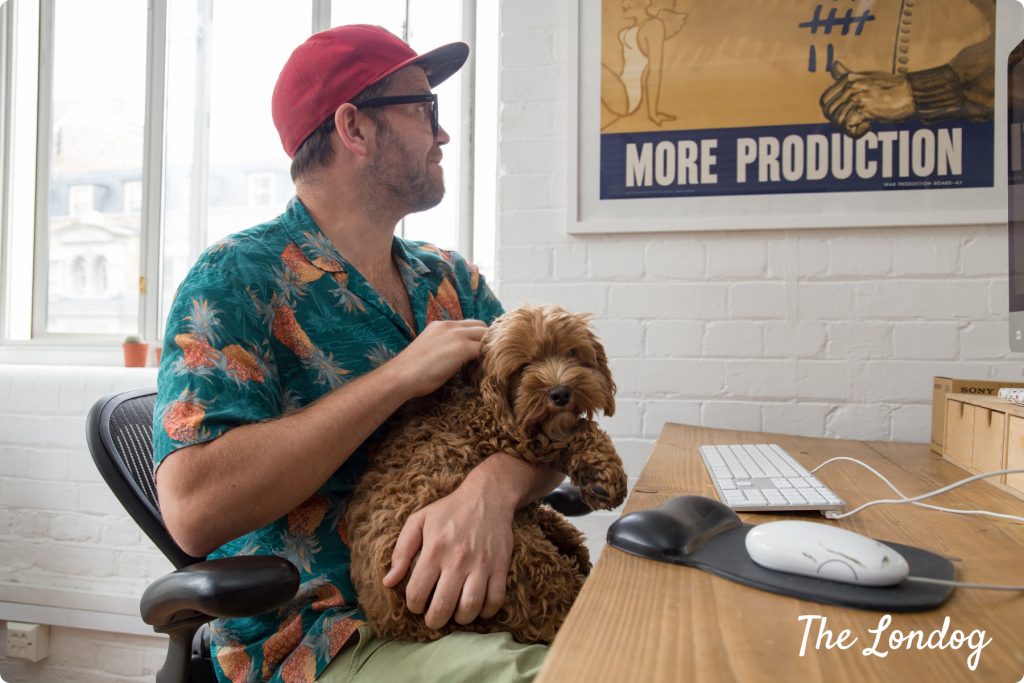 I have been meeting Peanut every now and then for probably a year now, and saw her growing in her paws. They say that nicknames stick. And this is how Peanut got her endearing name in the first place.

“Peanut, apart from being the best dog in the world is also the first pet I have ever owned”, recounts her dad, Daniel Chaput de Saintonge, founder of Knock Knock. “I picked her up on my 39th birthday from a farm in the countryside. She was by far the tiniest of a boisterous litter. She looked like a monkey nut: a head connected to a waggly bum. My girlfriend commented…’she looks like a peanut.’ It stuck.”

“We loved how unaware of her own diminutive size she was. Desperate to join in the wrestling with her siblings, she was overpowered, from one feeble wrestling attempt to the next. Regardless of her lack of body slamming prowess, she kept coming back for more, ever eager to get stuck in,” adds Daniel. “To this day, those traits are true. She’s still the same Peanut whose body wags in two halves. She loves everyone she meets and is brilliant with kids. Her unbridled energy and love for creatures great and small make her a joy to be around. She’s a morning cuddler and my constant companion.” 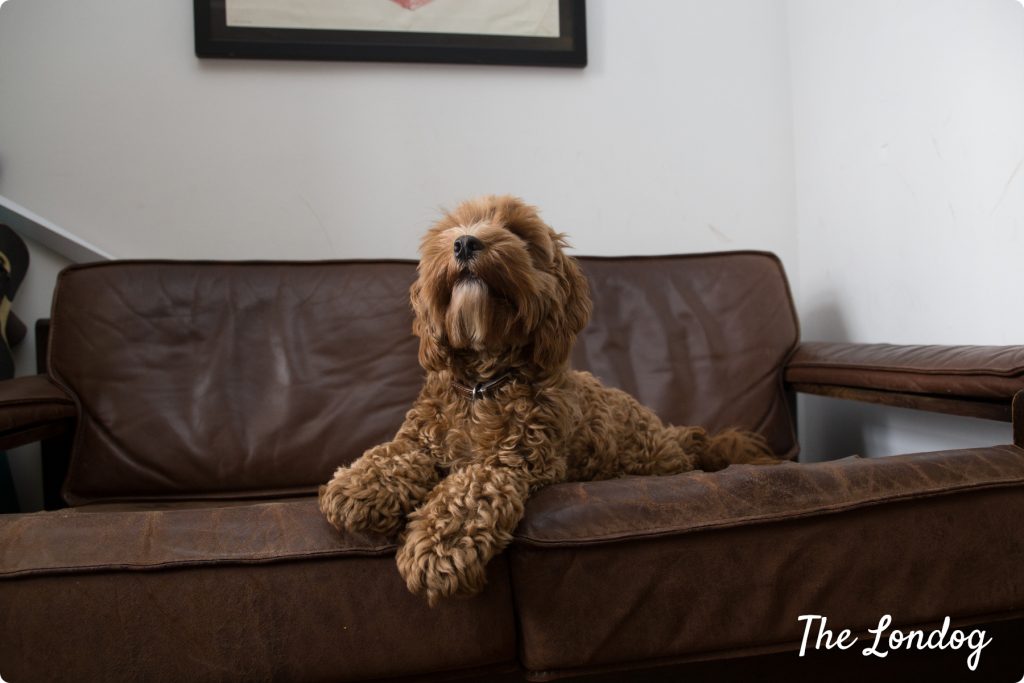 Peanut may seem a tiny pup finding her way in the world, but – you will be surprised – without knowing it, you may already have her photo on your wall… Chatting with Daniel I discovered that she is on mine, as she appeared in this year’s ‘The Gourmand’ charity calendar, all about dogs named after food. She is framed next to a monkey nut for the month of October.

Success boosted her self conciousness: as Daniel giggles, “She’s also demanded her own Instagram; be sure to check out @the_real_peanut and give her a follow. Only 25,000 mote followers needed until she’s an influencer.”

Peanut is also known for…

Funniest habit:
She’s hilarious with big dogs. Hiding behind my legs, she observes with a moment of caution followed by a tentative sniff. If she senses they’re cool, she launches into full on play mode. She can turn from ten out of ten fear to adorable playing in the space of a few seconds. Thankfully she has yet to be mauled. Older dogs tend to look at her with confusion as this unfolds whilst they are largely ignoring her.

Most annoying habit:
Peanut’s most annoying habit is her refusal to let go of a tennis ball, even though she is desperate for me to throw it for her. Oh, I should add that her bark is very shrill, and if she has a ball but no one to play with, she will bark for a playmate (which can lead to ball confiscation).” 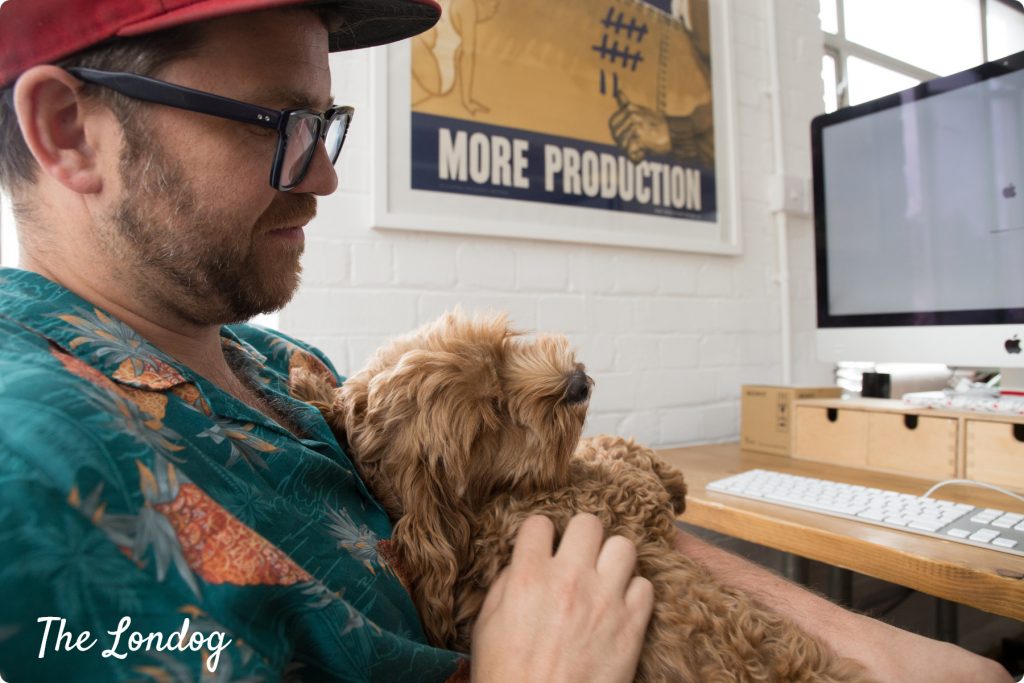 The office is Peanut’s second home, as she has been in since day one, which makes 16 month of office presence, Daniel explains. “In terms of nicknames, Matt (senior team member) very early on started calling her ‘The Nut’, this has stuck too and is definitely in the official canon of nicknames”, he adds.

In the morning she will patiently wait for the train and look for a snuggle on the commute to work, but at the office she is the “head of HR”, recounts Daniel. “If anyone has a problem, a quick cuddle with peanut sorts it out. If, during a moment of office banter, someone is in danger of crossing the line, a shout from one of th team will ring out, ‘PEANUUUUUT!’. This is office code indicating that HR’s involvement is imminent. It’s a fun way of making sure no one oversteps the mark. The involvement of Peanut keeps it light, ensuring banter ends with laughs, not law suits.” 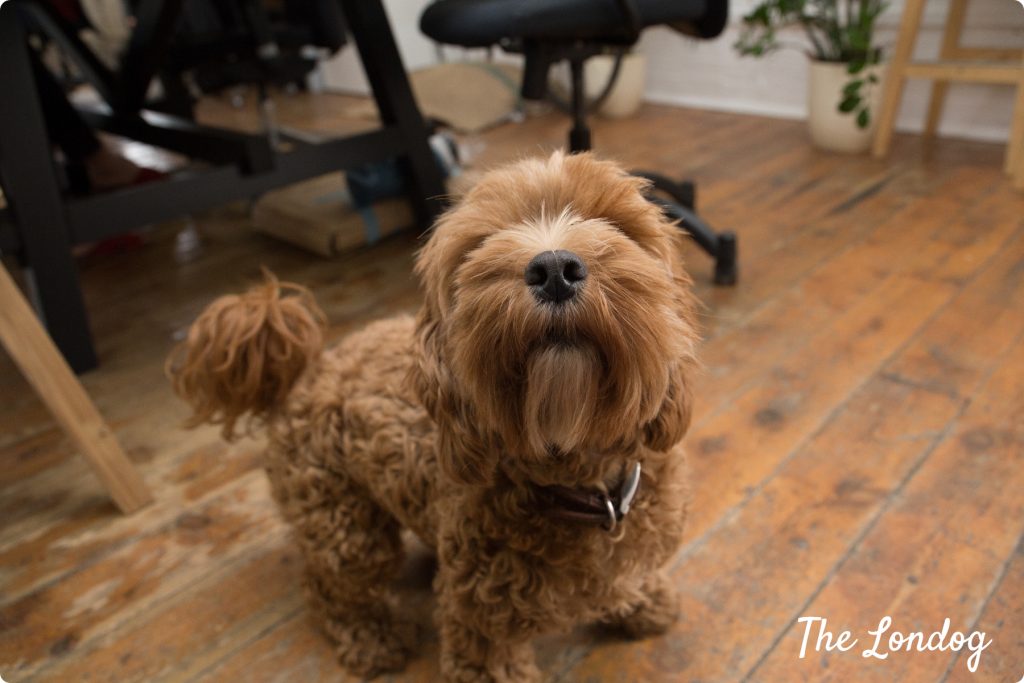 Peanut is clever (as she showed the time she got lost in Epping Forest as a tiny pup – with much panick of Daniel – managing to find her way back to his car), jolly and specialised in spreading joy. This is probably the trait on the basis of Daniel’s choice of what film character matches Peanut’s personality, “Although I’m loathed to cast Peanut as a sidekick, the film characters that instantly spring to mind are those that are unflinchingly positive and loyal to a ‘hero’. They see the positivity when their pal is in crisis and are a constant source of unashamed goodness. I think ‘Donkey’ from Shrek is a good example.”

A day in the life of Knock Knock’s Peanut 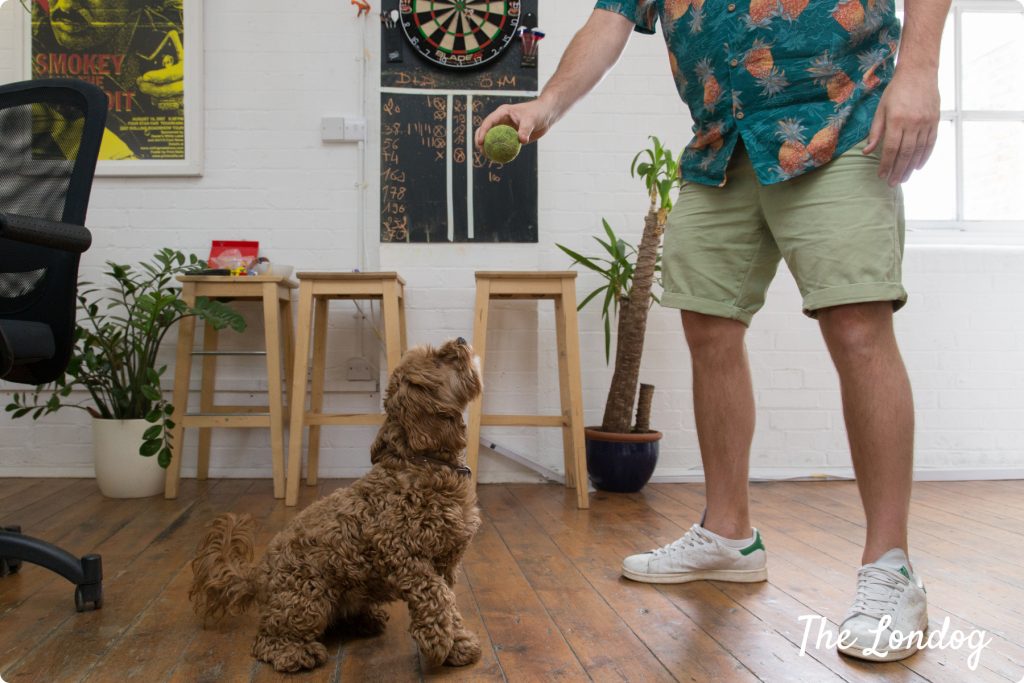 At Knock Knock’s office there is a big brown leather sofa near the entrance, with a cushion torn into pieces. When I visited the office, Daniel explained that it’s due to Peanut’s chewing work, “it was on its way out, but it is now a disgrace! She doesn’t chew any other furniture… I think I’ve just had to let this one cushion slide.”

“Peanut loves to sit under the lunch table in the middle of the office. She sits with toy in mouth and snoozes, waiting for someone to come and play with her”, he recounts. “Every day is different and brings a new adventure. When she was about 12 weeks old, she met Sammy the Schnauzer for the first time. Until then, the office had been Sammy’s territory so this was breaking new ground for both of them. Peanut’s naive exuberance was met with the first growl that Peanut had ever heard, she jumped out of her skin and evacuated her bladder in one swift movement. It was very funny, for everyone other than Peanut. Needless to say, they are great friends now, and I would say that Peanut has made it into a small and special list of dogs that get Sammy’s tail wagging.” 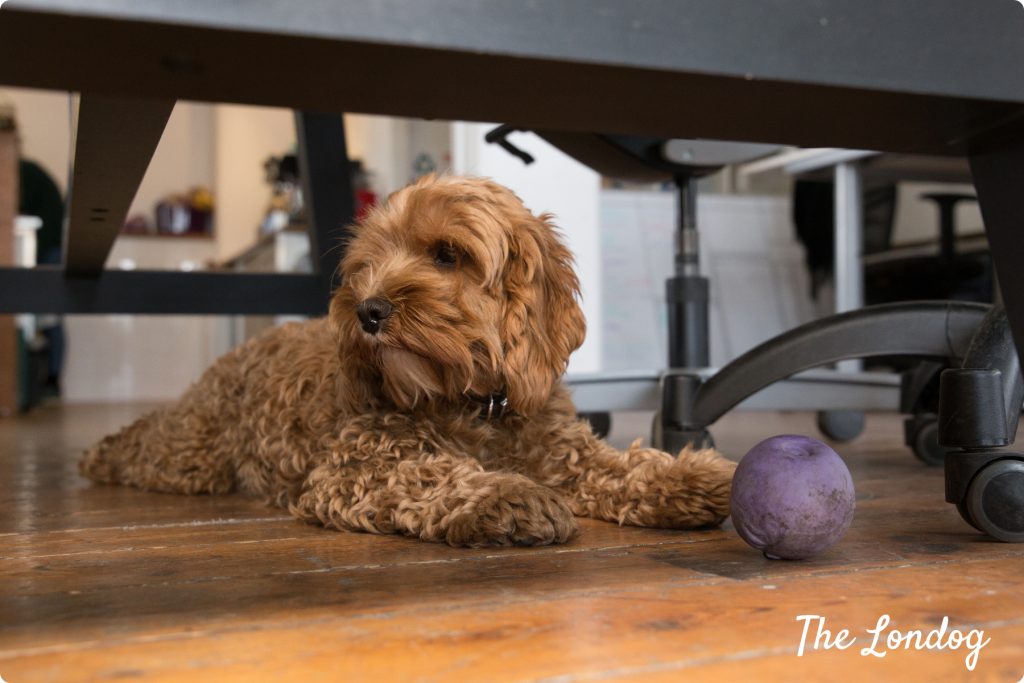 The team at Knock Knock loves her boundless energy and confirm that the office is happier when she is around. “It’s always playtime for her, which although can make me feel little guilty when I’m unable to give her the attention she’d like, it does mean that whenever anyone needs a break to stretch their legs, have wrestle or a cuddle, Peanut is there”, notes Daniel. “She is missed if she spends time elsewhere. When I come back from holiday, there’s a fuss dn surge of affection for Peanut, I’m often given a secondary greeting when The Nut hunger has been sated.”