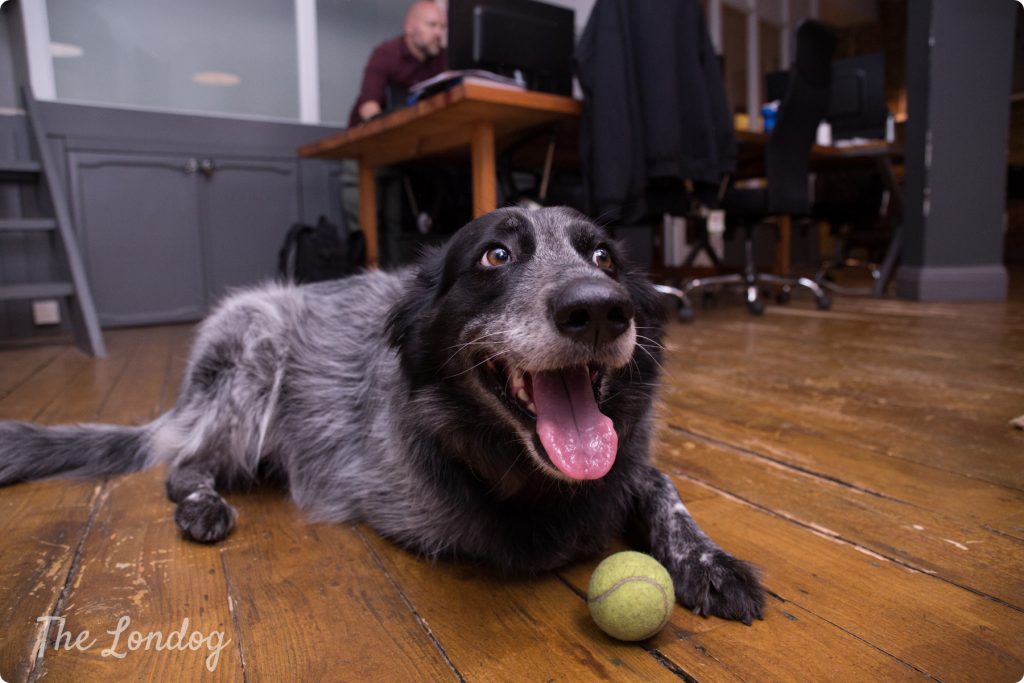 Brownie is the very-much-loved 5 year-old mongrel from Barcelona working at Gluru, an artificial intelligence applications startup, in Shoreditch. Unlike most office dogs featured so far in the Office Dog Series, she had quite a rough start in life and was very lucky to find Mercè taking her on. With Mercè they make an adorable couple. 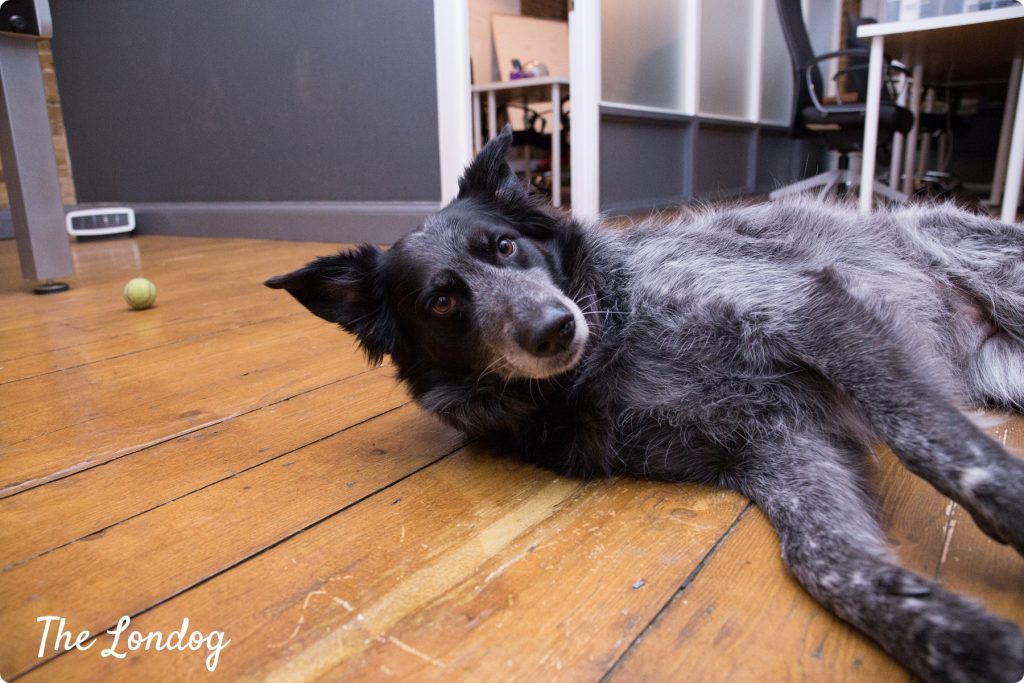 Mercè grew up surrounded by animals (she recounted that at some point her parents had two dogs, four cats, two parakeets and a pigeon) and she was much missing having a pet during her studies in Barcelona. “However, I didn’t want to buy a dog because in Spain there are plenty of rescue animals to adopt”, said Mercè.

“Browsing the internet [with my boyfriend] we came across 5 months old Brownie’s photo and we fell in love! She was a tiny puppy that had been found on the side of a motorway desperately clinging to another dog (who was believed to be her mother) that was paralysed due to having been hit by a car” continued Mercè. “We were told that the mother was also adopted eventually, but unfortunately died of a heart attack”. But Brownie was not meant to be the only pet: around the same time they got her, Mercè also found two kittens on the street and ended up keeping them, “so Brownie has two brothers”.

Since then, the five of them went through two relocations. First to Edinburgh, when Mercè was offered a scholarship to study a master’s degree. They ended up driving from Barcelona to Edinburgh “with Brownie in the boot, the two cats in the back seat and all our stuff crammed into a tiny Citroen C3! As you can imagine, it was a crazy trip!” commented Mercè. The second relocation brought them to London. 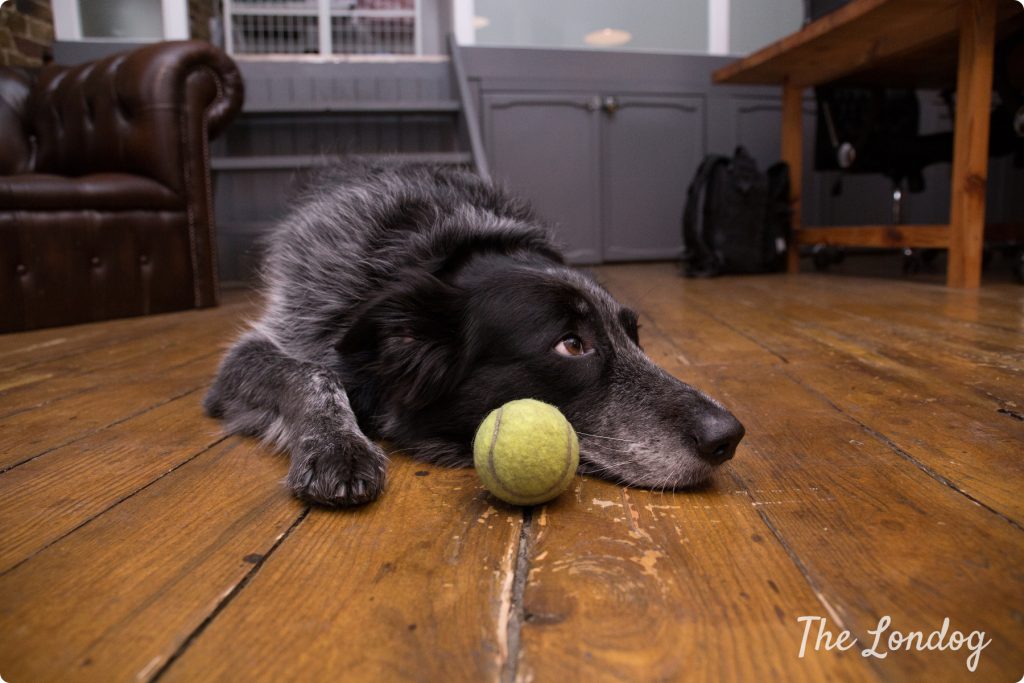 Brownie is one of the sweetest creatures, who loves her tummy being tickled. In fact Mercè explained that the rescue centre named her after brownies (the cake), due to her sweet nature. However, Mercè finds her name is often misunderstood in the UK, “Since we have been in Britain, the first question everyone asks me is ‘Why is she called Brownie? She’s not brown!’. So now I reply ‘She’s got brown eyes, she’s got brown sideburns!’”

Brownie is also very smart and most likely would make an outstanding working dog. “Brownie is not a very doggy dog, she’s more like half cat half human. She has a wonderful personality and she is extremely well-behaved, I can take her anywhere (she’s been on buses, trains, tube, Uber, shops, restaurants, other people’s houses) and we never had a single problem” remarked Mercè. “She is very friendly and gets along with any human, although she tends to ignore other dogs.” 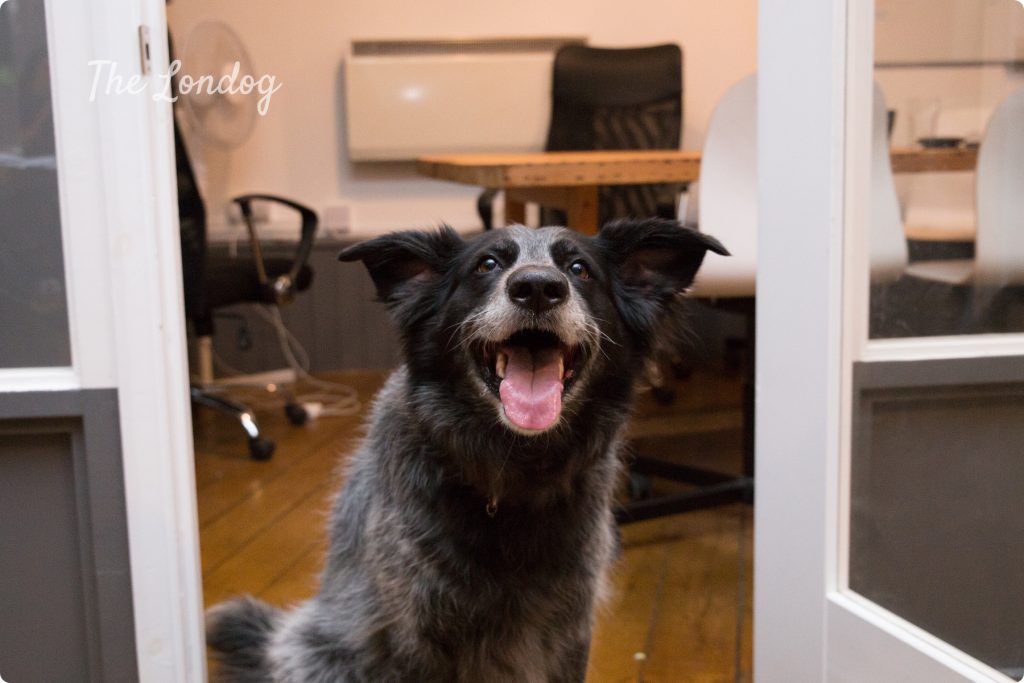 Brownie is also known for…

Loving: Swimming in any source of water (river, lake, sea), saying hi to every person at the office in the morning, dental sticks, greyhounds
Hating: Being left alone, when the cats eat her food
Funniest habit: Dreaming in her sleep, wiggling on her back while doing funny noises,
Most annoying habit: Sitting in the muddiest puddle she can find in the park (normally after a bath), lying in the most awkward spot in the office where everyone needs to step over her, knocking things over with her tail
Most famous/infamous episode: Her growing fame in the Overground – one morning a random person said ‘Hi Brownie!’

Brownie at the office 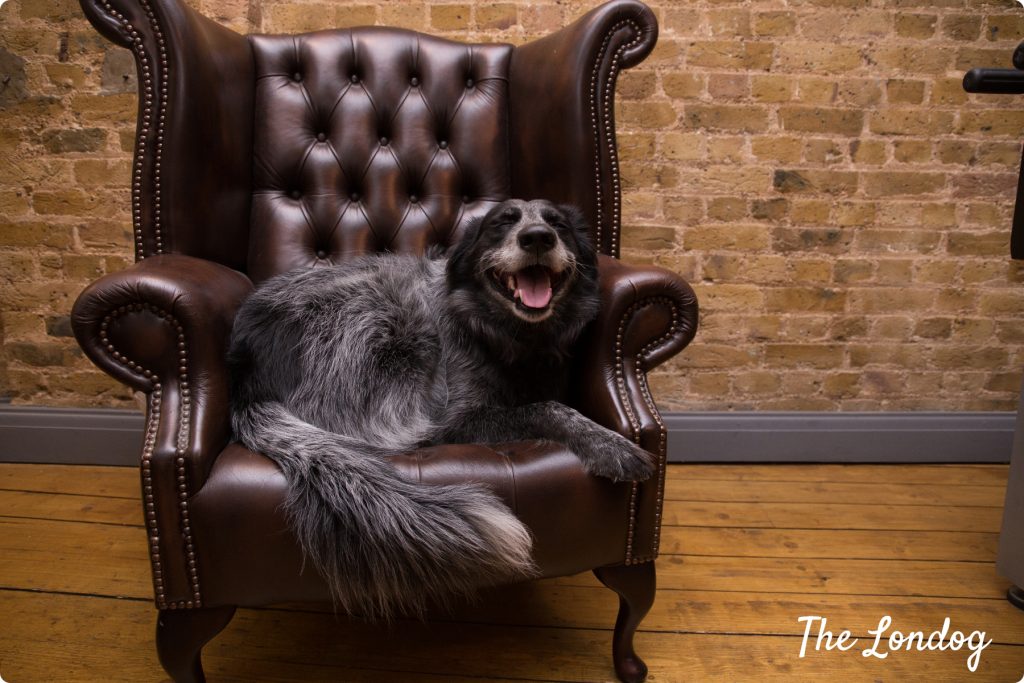 At the office, Brownie has the role of Chief Happiness Officer, for her gift of lifting the team’s mood every day. “What everyone really loves is being greeted by Brownie every morning when they arrive at the office. She does a couple of barks and doesn’t leave that person until she receives a session of strokes. She does her morning greeting ritual to everyone, although she does have her favourite people (which is usually the people that have some treats for her, surprisingly!).”

When somebody new visits the office she can hardly contain herself and will run to the stairs, barking and wagging her tail. Mercé recounted that once in excitement she even barked at some investors coming in and she tried to sneak in into the board meeting too! 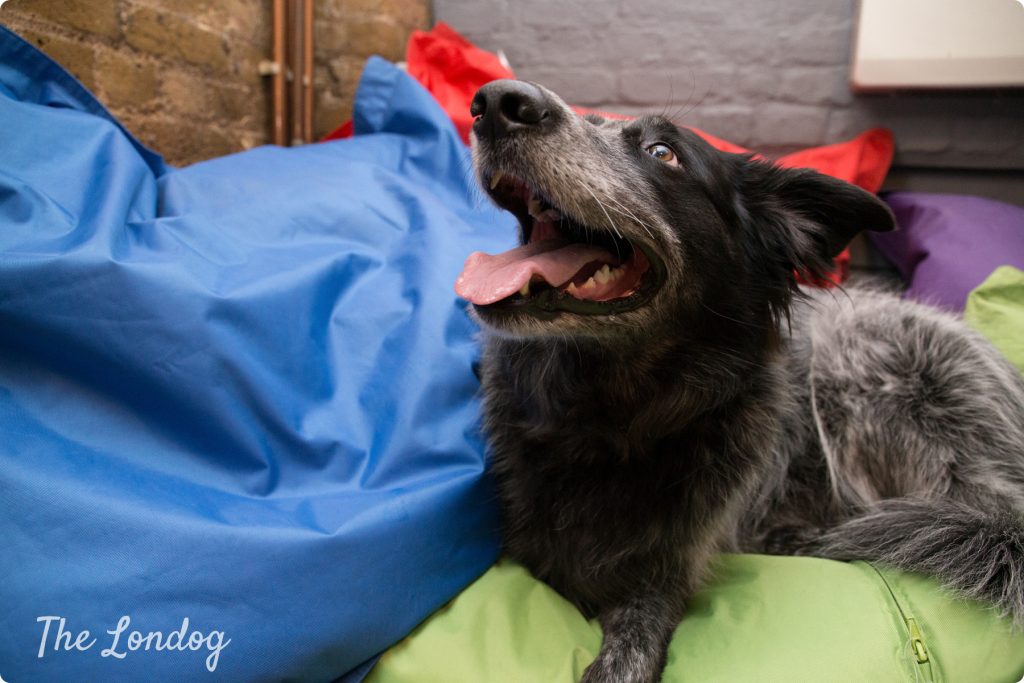 Her office routine starts in the morning with her racing upstairs to the office for her ritual greeting of the team and getting excited about people coming in. “She then usually lies around and likes finding unique places to sleep in almost any surface in the office. We usually go for a small walk at a park nearby after lunch, where she can sniff around and stretch her paws. She likes joining our meeting and take a nap while we’re doing the hard work, and she interrupts our session with her dreamy noises”, added Mercè.

“Another funny thing that she likes to do is when we have our stand up”, added Mercè. “The stand up involves our team standing in a circle and updating each other on our weekly work. Brownie likes to go into the middle of the circle and start rolling on her back and do funny noises. Maybe it’s her way of updating us on her doggy work?”

Brownie bringing joy in the office 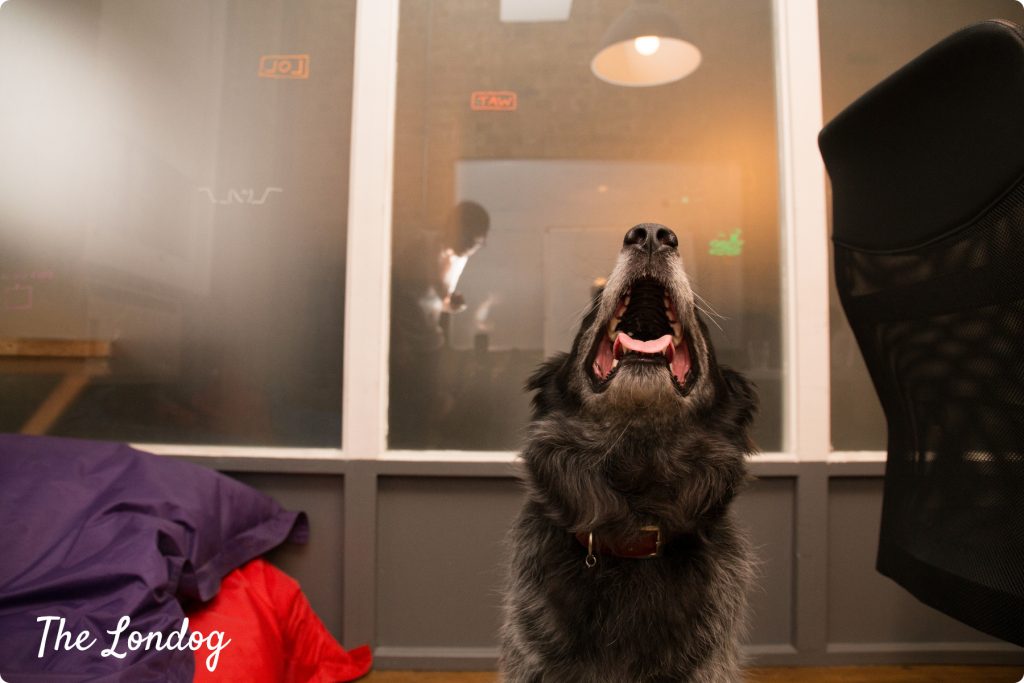 From a quick survey in the office, Mercè found that “everyone agrees that it is very calming to have a dog to pat and that having her definitely contributes to a healthier and less stressful environment in the office. Whenever you start feeling down, you can always count on Brownie to cheer you up!”.

“For me personally, of course on the best perks is that she doesn’t need to sit at home alone on her own, which would be very sad for her”, concluded Mercè. “She enjoys human company and being able to spend every day with her is amazing! Also my commute with Brownie is much more enjoyable than on my own, even though it takes me slightly longer. It’s always fun to see her reactions to noises and people, and I have random chats with people who are interested in her story, which always makes my day more exciting”.

Stay tuned to find out about Thursday office dog