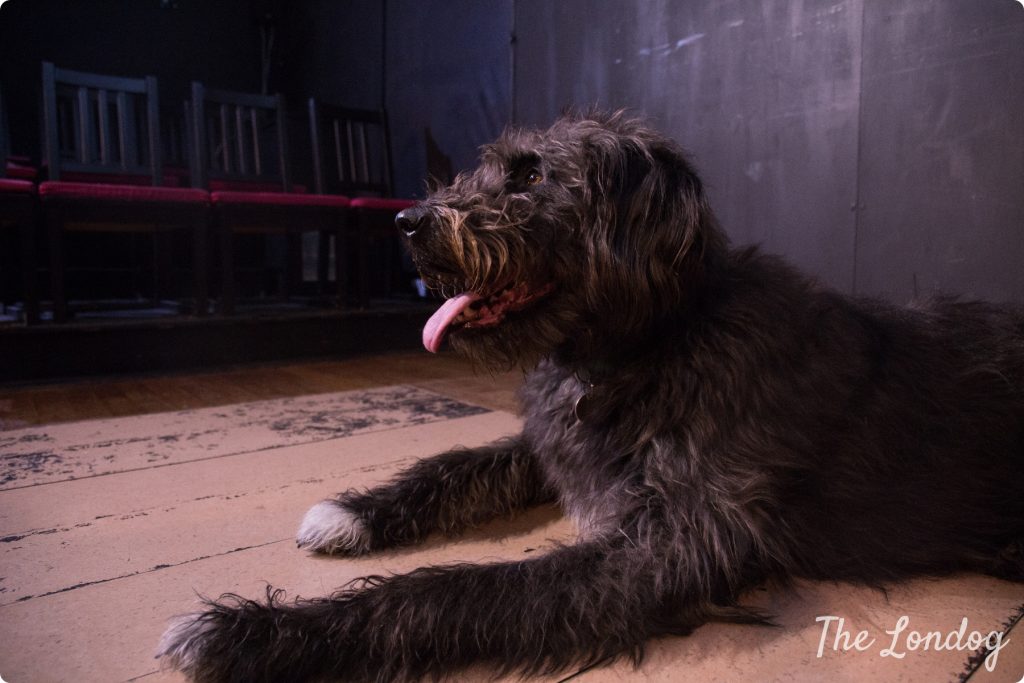 From outside – if you hadn’t spot the sign – you would never tell you were in front of a theatre. But if you walk down the stairs leading to the building’s basement, and enter the door at the bottom, you will find yourself in the (tiny) London Theatre. Formerly a sound production studio, the space was converted into a theatre hosting stand-up comedy shows and acting classes by former policeman Harry, and everything is small-sized apart from its resident theatre dog, Abba, the Malamute/Irish Wolfhound cross! 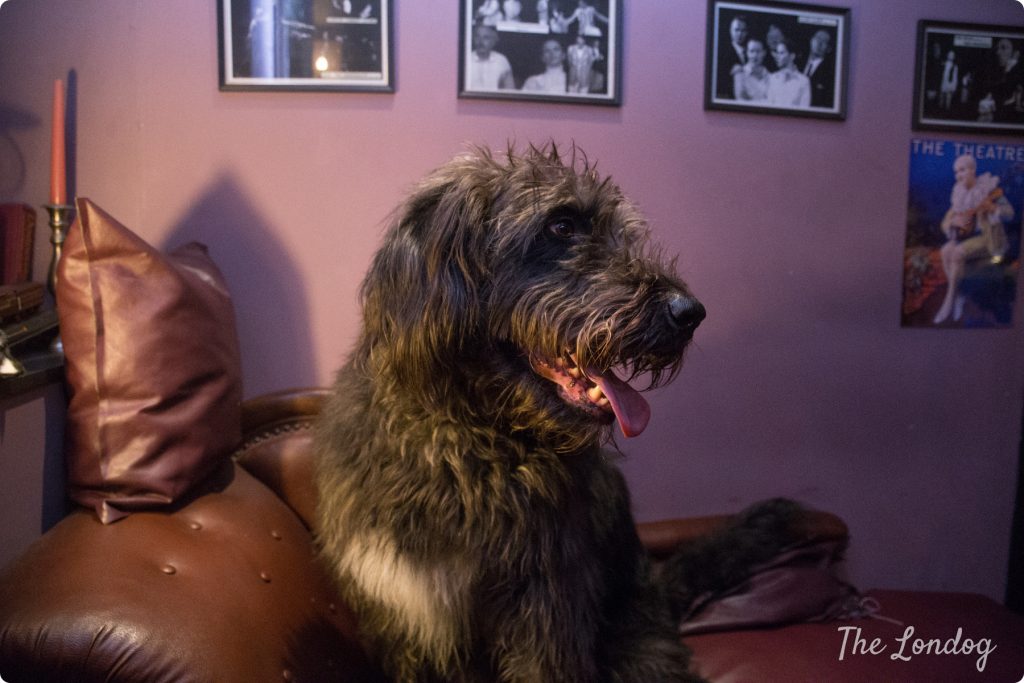 Many theatres have traditionally had cats for mice housekeeping, but I had heard of only few theatre dogs before. With her over 50 kilos, Abba has a noteworthy stage presence. In fact, she also participated to two productions, playing a classical role in Chekhov’s Cherry Orchard. Having been frequenting the theatre since she was a puppy, it is not surprising she picked up some skills. Abba also enjoys dancing the Conga and this is her best party trick.

She is extremely affectionate and loves roaming in the theatre, as well as in the back garden and terrace, where she can enjoy some dog play time. “She comes to the theatre most days, sleeps through most productions and wakes up and meets people in the bar afterwards”, explained Harry.

Abba is also known for…

Loving: Tummy tickles and being centre of attention in the theatre bar and on the train each day
Hating: Squirrels
Funniest habit: She has learnt to conga and loves to dance
Most annoying habit: Being a foodie!
Most famous/infamous episode: She has won a number of rosettes at a number of Scrufts-type doggy shows around the UK for best trick, seriously she loves to CONGA! 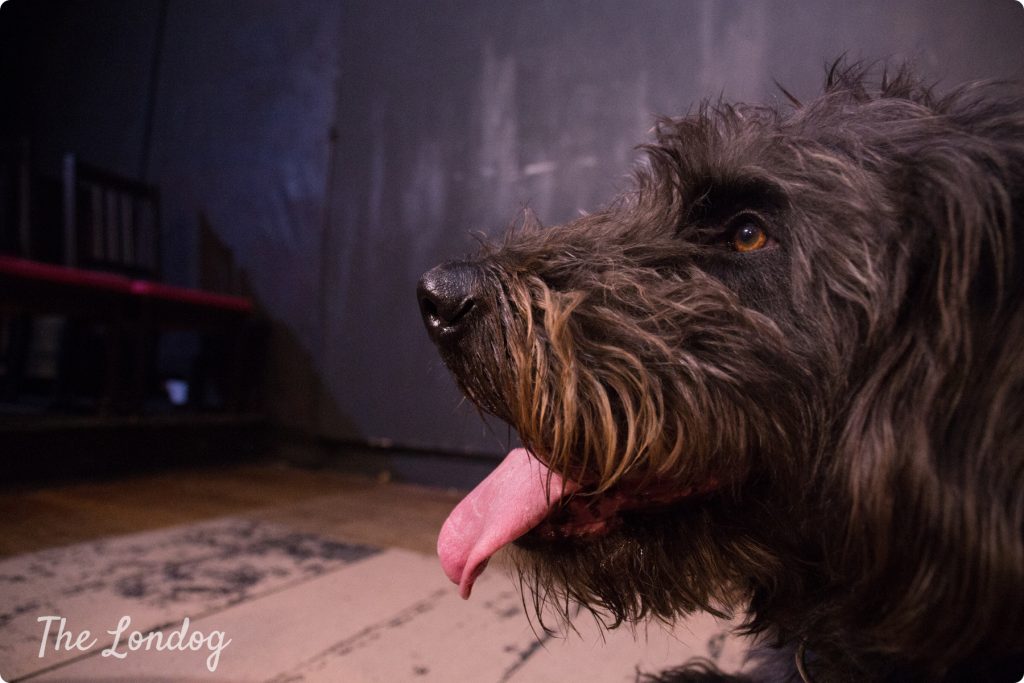 The theatre has some airline seats near the bar. “She likes sleeping on the airline seats and her daily game of ball, which means us throwing her ball across the stage and her fetching, very funny to watch as she propels herself like Scooby Doo, given that the wooden theatre floor has not much traction”, said Harry.

The London Theatre even hosts regular free “Dogs Take Overs”, when it opens its doors to a maximum of 20 four-legged to let them run off leash in the theatre and garden. Abba is known for “manning the bar” during such events, when ‘Doggy Beer’ (with no alcohol) – which label carries her image – is served.

What does Harry love about Abba the most? “The way she goes into a packed room and lays down in centre demanding tummy tickles”. 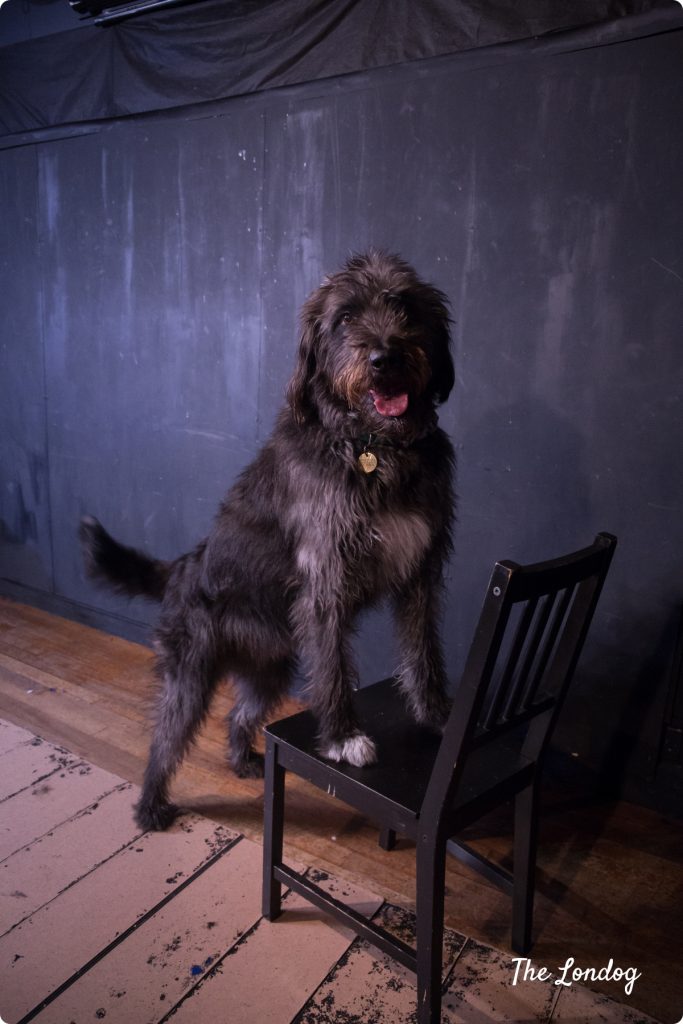 For tomorrow’s office dog story we bring you in the film world… stay tuned, 24:00AM BTS on the blog! In the meantime… can’t wait to learn more about the Series and how you can get involved? Read here.