Night at the dog-friendly theatre (with pizza too) 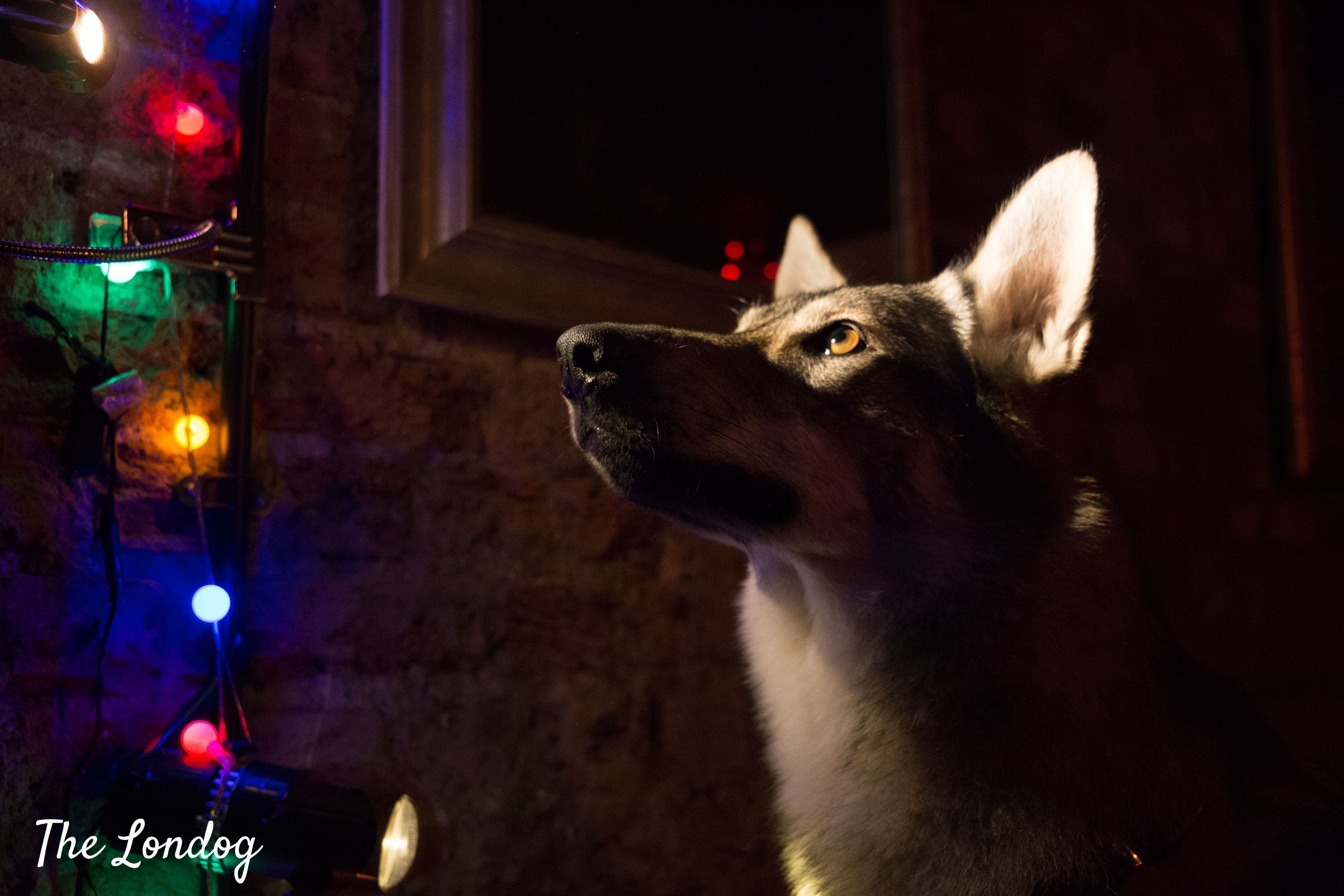 Theatre night, with dogs. We had previously interviewed a theatre dog and been to a dog-friendly immersive experience, and were pleased to hear that there is a brand new dog-friendly theatre show in town. We were recently invited to the preview performance by newly established Thunder Theatre: 3 short plays, food and drinks, dogs allowed on selected shows, an everyday setting. In this post you will find our thoughts and all you need to know about about Thunder Theatre dog-friendly theatre performances. 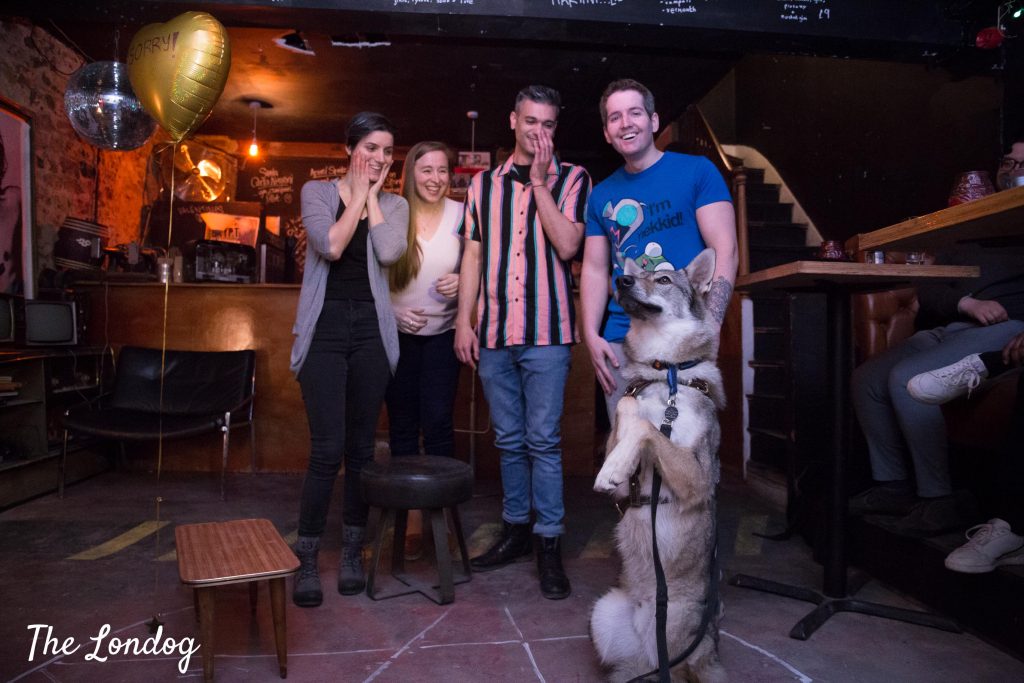 Thunder Theatre has just started hosting performances at the Crypt at Lost Boys Pizza in Archway (on the main road). The venue may at first seem an unsual location for a play, but it actually perfectly reasonates with Thunder Theatre’s mission. “We don’t want to convince anyone to go to the theatre, we want to create a new concept of theatre and bring it to the people. Put it on in places where people like hanging out, with good and affordable food and drinks, dog-friendly and with an interest in culture and community. It’s more like don’t break your day to go to the theatre, but easily include theatre in your day,” explains Maria Bardi, Founder and Director of Thunder Theatre.

Maria tells us that the concept for Thunder Theatre started last year, out of her frustration with how traditional theatre is established, “From a theatre maker perspective, it seemed impossible for anyone starting in the industry to put on a project without a solid financial backing and a large crew. As well as going to see theatre: they don’t make it easy for people who finish work late, or don’t have 3 hours in the evening, or just can’t afford unreasonably expensive tickets. I just want to make theatre affordable and approachable for everyone, both theatre professionals and audiences.” 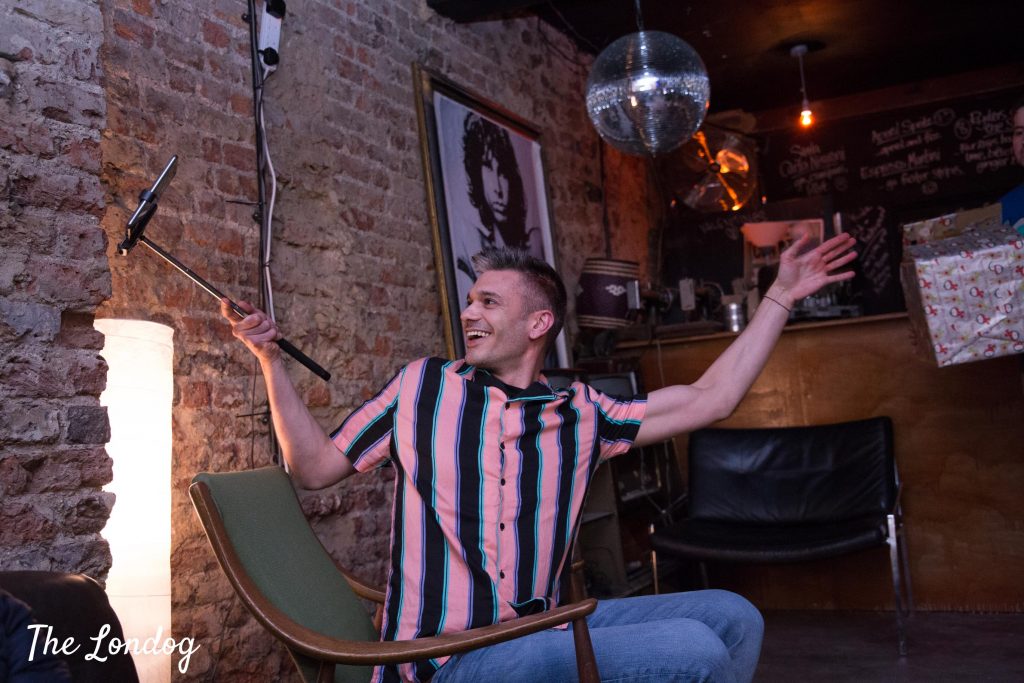 The decision to make Thunder Theatre’s shows dog-friendly on the last Wednesday of the month made sense to Maria, how is a huge dog lover and from the time we arrive for the show takes care of us and the dog especially. “Making dog-friendly show has been always in my mind,” comments Maria. “As a theatre maker and goer, and dog sitter, I hated being unable to combine both my favourite things in the world. You can bring dogs to the office, the pub, the cinema, restaurants… but not to the theatre, and that limits your potential theatre audience. I thought that there might be a huge amount of people who, like me, enjoy theatre but can’t go because they can’t bring their best friends with them, and I wanted to change that. We are the only dog-friendly theatre in London.” 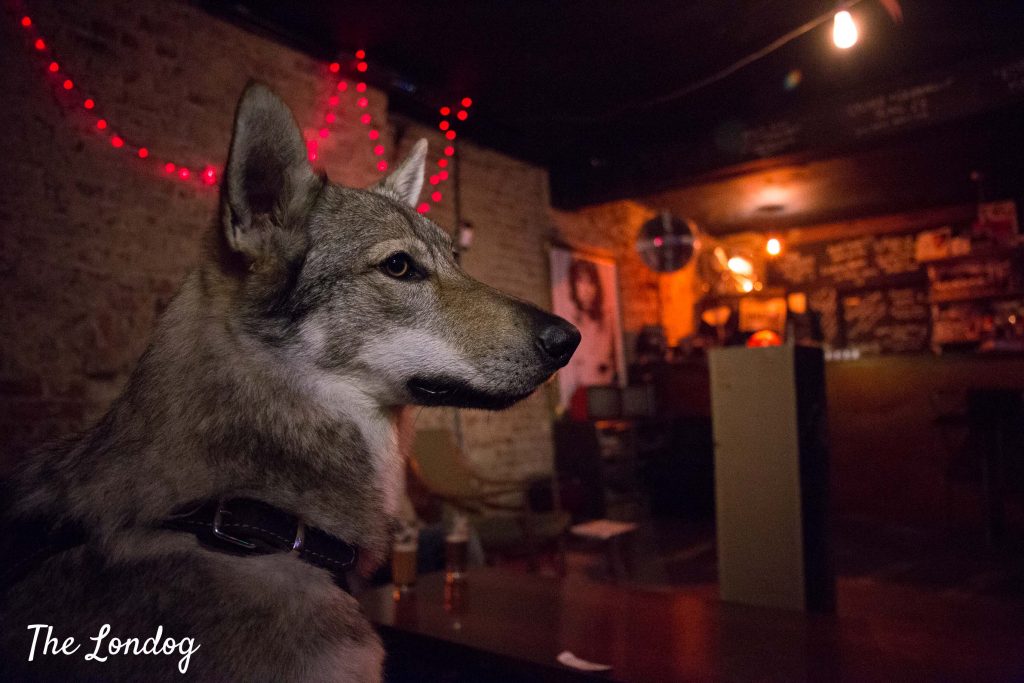 The night we went, it was their very first dog-friendly performance in London. They had previously had a couple of shows with dogs in Madrid, Spain, and Maria had told us that it had been a fun experience, adding “They get quite amused by the movements and the conversations of the actors. Some of them get excited when the scenes get a bit heated, and they want to join the party. But doggies normally sit down and relax.”

Thunder Theatre doesn’t have a resident dog, but one of the actors brought her dog once, and apparently he quite enjoyed watching the rehearsal (and he also had a nice nap on the comfy sofa)! 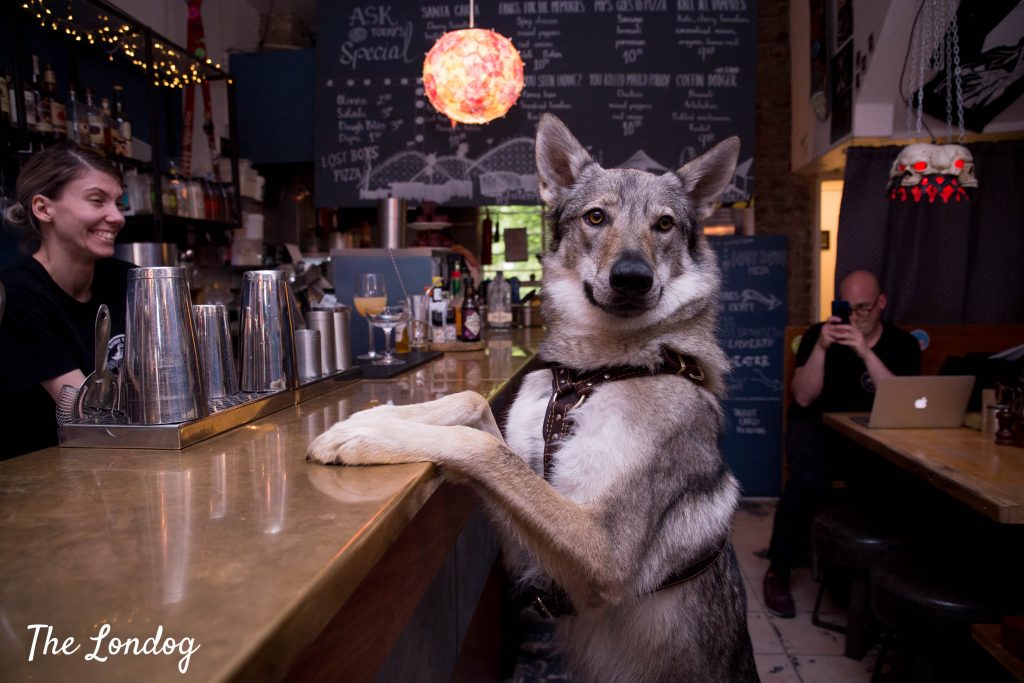 The venue picked by Thunder Theatre for the show was Lost Boys Pizza: an intimate place, vampire theme on their logo, candles held by old bottles on the tables upstairs with wax pouring on them, light strings that add warmth to the place a warm place. Downstairs was the Crypt, where the show would be hosted, a dark space with red bricks walls, two sofas and some high tables, a bar counter on the other side, no stage, the actors would be at the same level of the audience. Unusual for a theatre play, but in line with Maria’s disruptive idea of theatre, Maria said it holds max 20 people, but I’d say less if you join with dogs.

I had received an invitation +1 dog, so put out a call offering the spot to patrons who support The Londog on Patreon – Patreon is a creators crowdfunding platform and we have recently launched a page to raise funds to support the blog -.  Vulric the Wolfdog (@wolfdog_of_london on insta) and his human, who were the first ones to sign up as Patrons when we launched our Patron page the other week, joined for the preview. We arrived a bit earlier and were offered a seat upstairs while they prepared/finished reharsing in the crypt downstairs ahead of the show. As soon as we entered, Vulric received a warm welcome by the friendly staff, and a lot of strokes and attentions. One of the actresseses, who is a huge dog fan, popped over too to say hi. 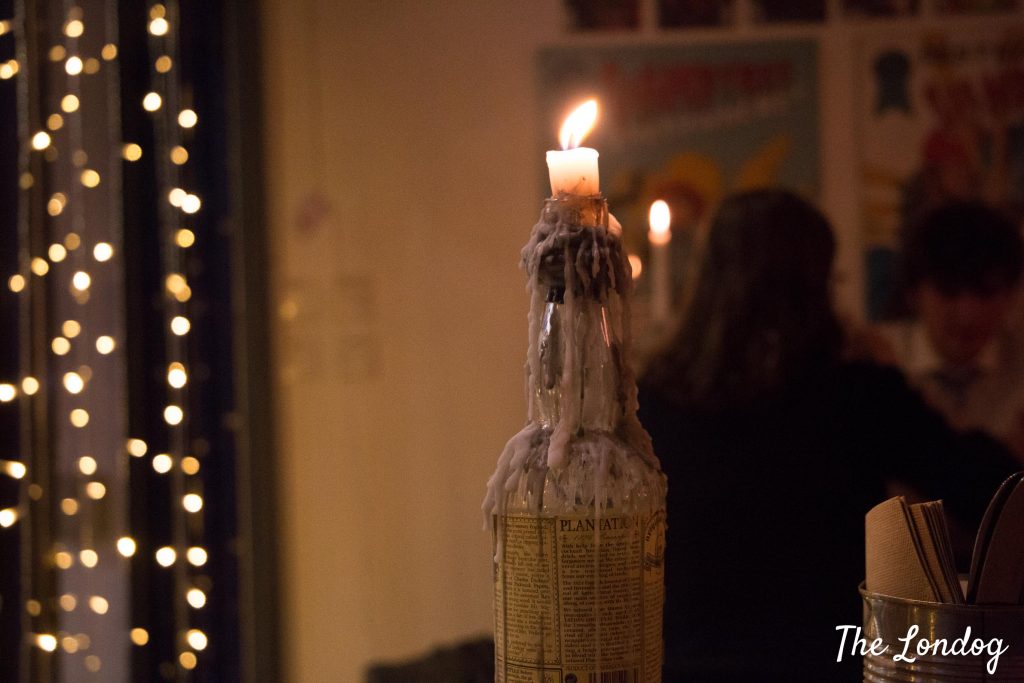 Maria came over to tell us that she had put a dog water bowl for Vulric downstairs in the crypt next to the sofa she had reserved for us, so Vulric could have more space on the side or could lie on the sofa to stay with us and be more comfortable. She also said they would have treats for him and explained that in some parts of the play there would have been some noises, people fighting and an alarm going off, so asked whether that would have been fine with Vulric.

As Vulric’s owner suggested that in case he had howled she would have popped out with him for a second not to disturb the other guests, Maria explained not to worry about it and there was no problem for howls, and that her question was because for her the most important thing is the well-being of the dog. I found her attentions really sweet. It is rare to find such a dog-friendly welcoming. 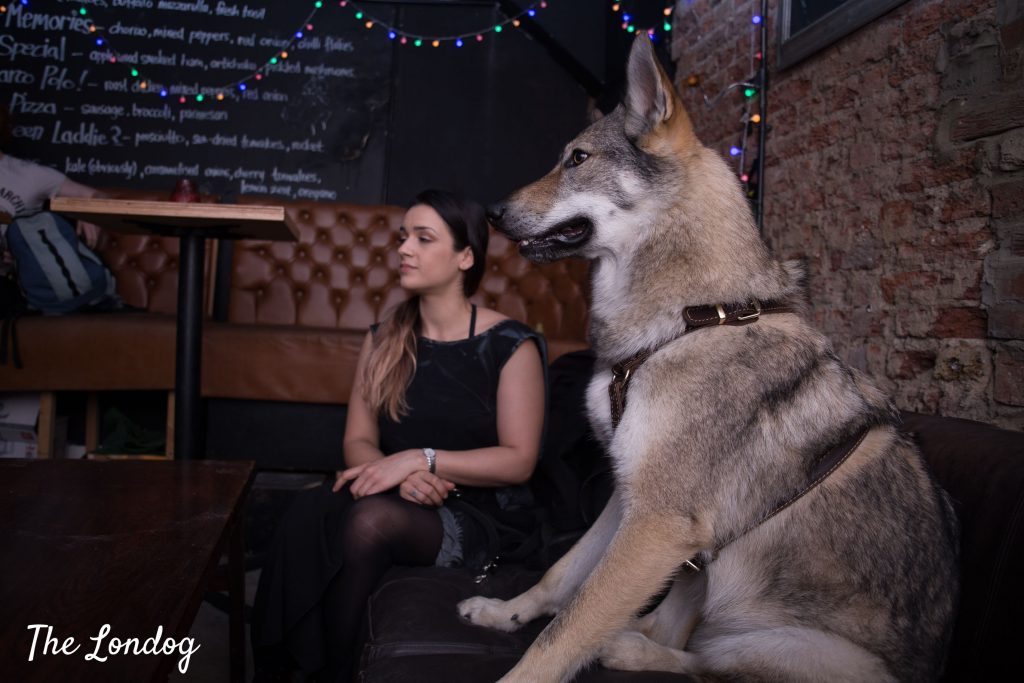 Time came to descend in the crypt, through the narrow stairs at the back and soon the show started: 3 plays, 20 minutes long each, with an intermission of a few minutes in between. We were really honoured that Maria had reserved us the best spot, on the sofa. As the light were dimmed, the first play, “The Button”, kicked off. Two actors, a bunker and a mysterious button, a story unravelling in a dystopian future, when a catastrophic event has forced Earth and its inhabitants into underground bunkers.

Vulric, sitting on the sofa between his human and I, was completely enraptured by it: such intensely staring while the action developed. He did not do a bark or howl, he was so quiet and attentive. In the most dramatic moments he would stand up on the sofa, and he performed some endearing head tilts when some noise came, while he didn’t worry when one of the actors hit his hand on the table. 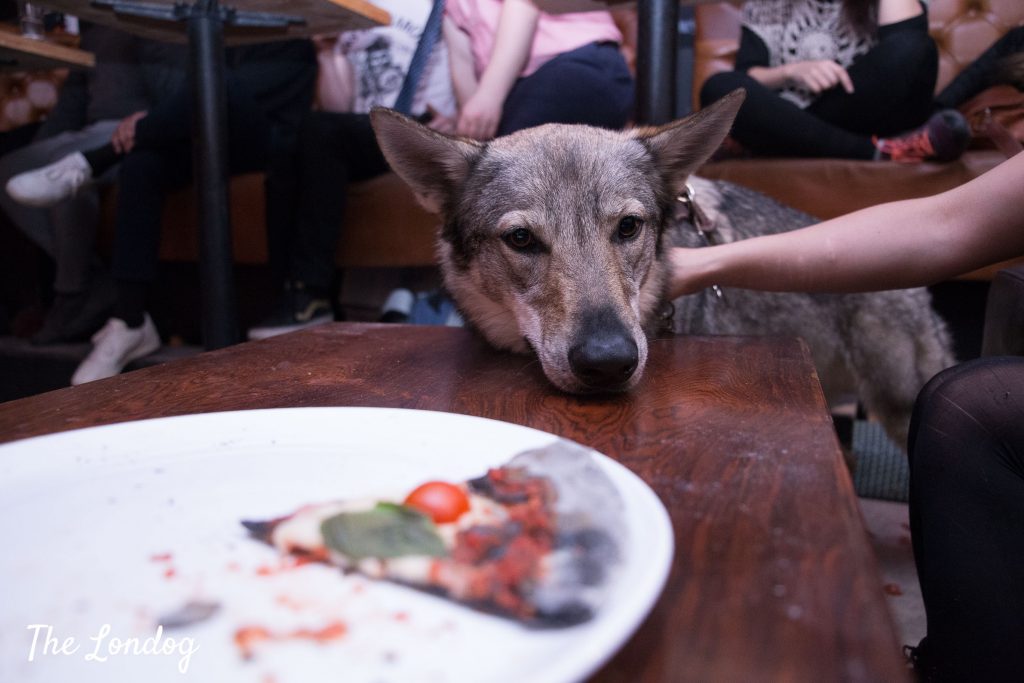 Following the first play came the pizza (pomodoro and mozzarella with basil) during the intermission. In fact, tickets for the show include half a pizza per person. I am quite picky with pizza, but found Lost Boys Pizza one very good and light. The dough is grey because it is charcoal pizza! Much lighter than the regular one. As Vulric is partial for pizza, his human had him jumping off the couch to preserve our food.

The second play was called “Solo”, about a teacher being confronted by a chorus student’s parents following a situation that isn’t covered by the school’s policy unravels. Vulric had already got used to the situation and quietly lie on the couch. I personally found the performance of the actor playing the mum amazing (how she interpreted some parts without words, just with her expressions and mumbles!) and Vulric’s human favourite was the dad’s. 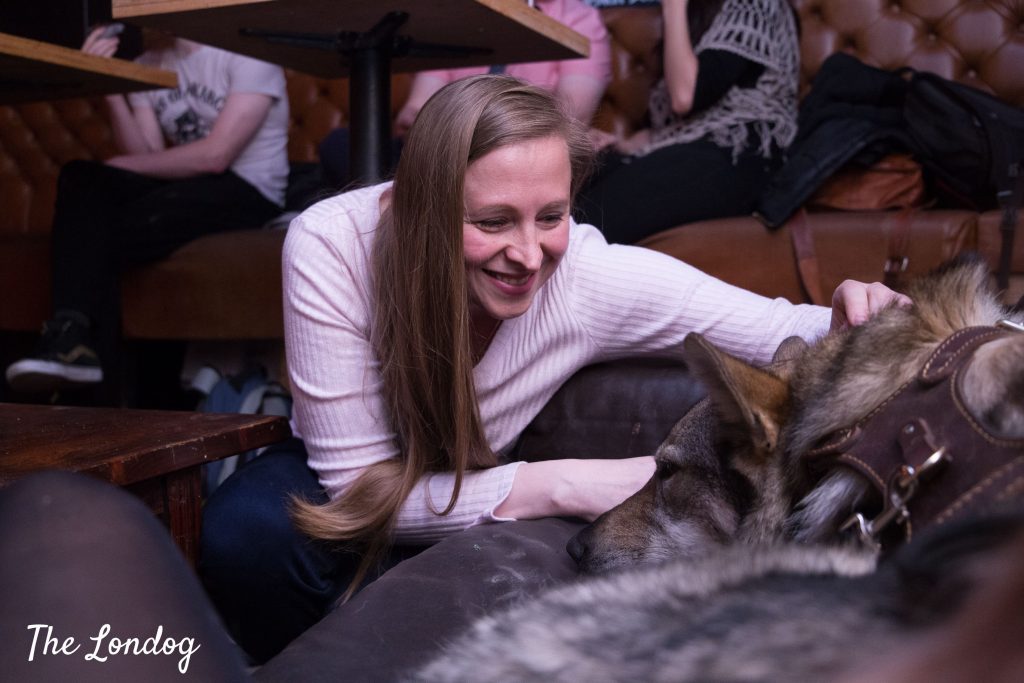 During he second intermission, there was time for drinks at a special rate, before the third play, “Balloon”, started. Across the 3 plays there were 4 actors, with rotating roles, and this last one was played by the two male ones. By then Vulric was napping on the sofa, probably after a treats overload after a few fell on the floor.

As the play ended, there was an enthusiastic applause and all the actors came out to receive the well-deserved recognition, and of course a lot of dog petting afterwards. Vulric posed for some pics and even performed his “sit pretty” trick, causing laugher and admiration from the actors!

What you need to know 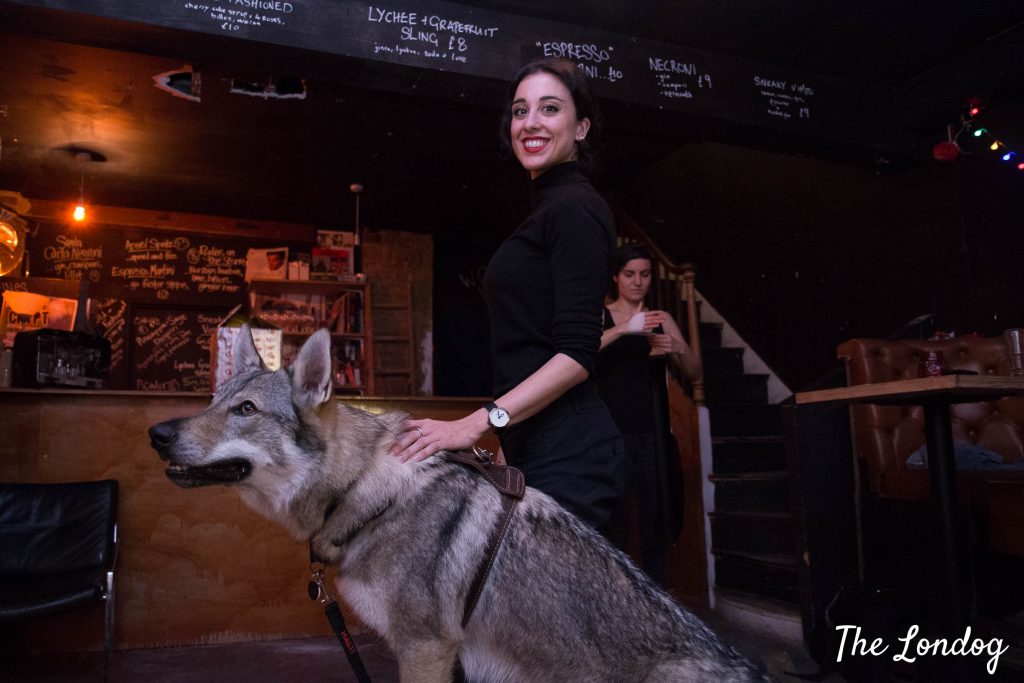 We found the plays great. The actors are very good, my favourite was the lady playing the mum in the second play, Vulric’s human one was the dad in the same play. I really like it. It was easy and light and the actors were really good. We received a five star treatment and all staff loved dogs.

Vulric did great during the play, watching attentively the first one, then settling for the following two, almost sleeping at some point, curled up on the sofa with his owner. About the experience, Vulric’s human later noted, “I wasn’t sure how Vulric would react to the theatre, so I made sure he had a long walk beforehand and came armed with treats. Interestingly, he was happy to sit through the entire performance and watched it so intensely, as if he understood every word that was being said.” 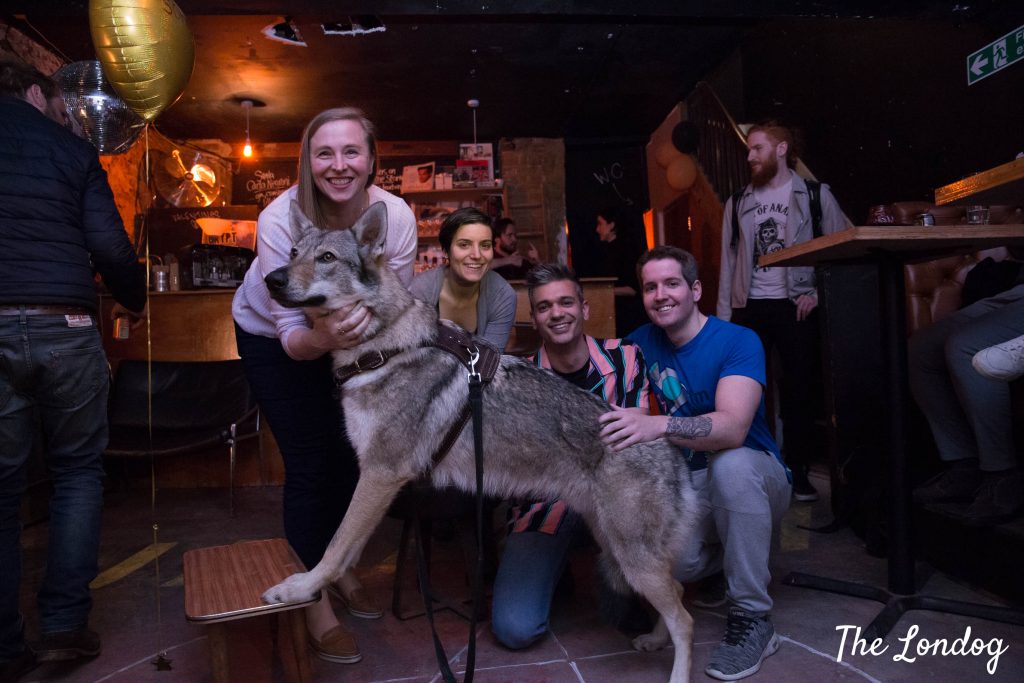 As Maria said, it’s an intimate venue, so the experience is quite immersive itself, and while there is no interaction intended, she said that it has happened in Madrid that dogs jumped into the stage and the actors would very naturally improvise and interact with the pooches. As mentioned above, something to keep in mind, however, is that there are sudden noises during the play, so it may not be something for every dog. For instance if your dog becomes easily stressed in new situations or when hearing noises, this could be a challenging experience, but it is otherwise a lovely opportunity to spend a night out bringing your dog along.

Vulric’s human agreed “What a great experience to try with dogs… provided they are calm, confident and not noise reactive. I do want to make sure people only take their dogs to experience that they would really enjoy, it’s not for every dog and that’s ok.” 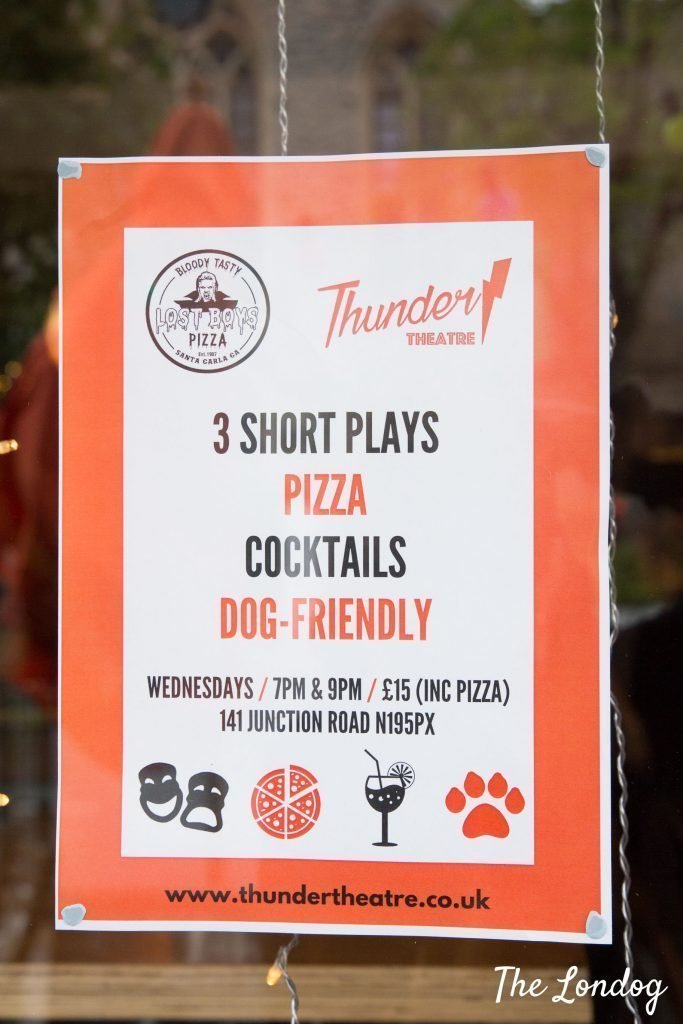 Shows are up every couple of weeks, but dog-friendly performances are on the last week of the month. The next dog-friendly theatre date is Thursday 25th July and 22nd August 2019 at Lost Boys Pizza in Archway and spots are limited and this week’s humans-only show sold out, so make sure you book fast your ticket here. In case you want to learn more about the cast all information is on Thunder Theatre’s website.

Tickets cost £15 and give you access to the play plus half pizza per person, dogs go free, available here.

Thunder Theatre has plans for the future too, including playing at Hackney Picturehouse, so more to come! 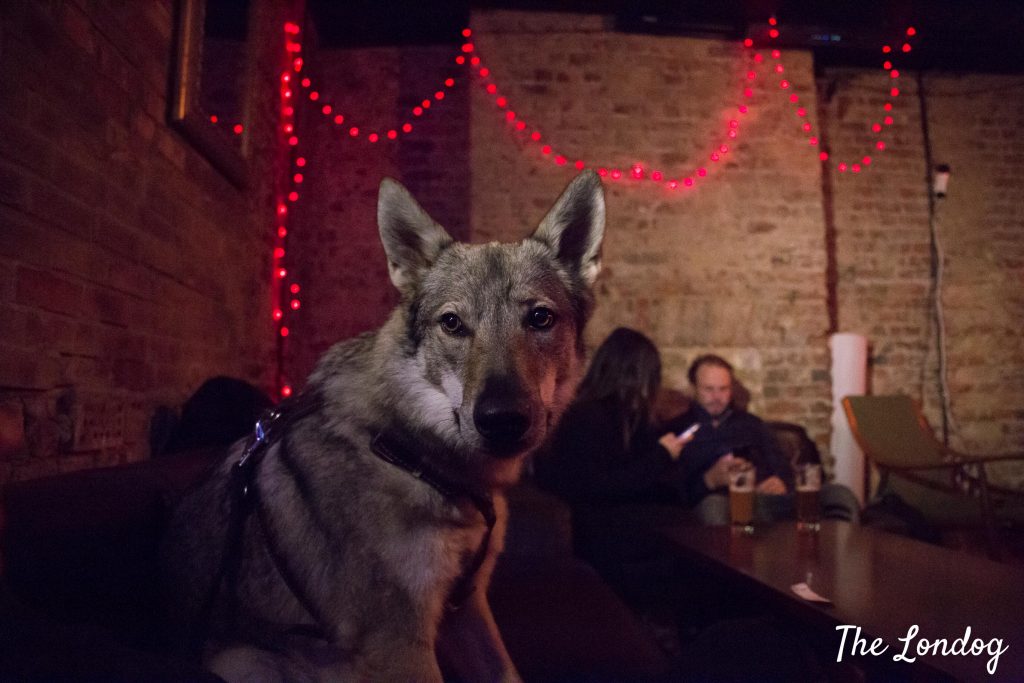 As common for press, we were invited and offered attendance to the preview show. This is an independent review.

Before you go… You can join us on experiences like this one with your dog by becoming a Patron: this will grant you access to this and more benefits depending on the tier you choose. The best thing is that all pledges go to help funding The Londog, so you will be contributing to building a better resource.