Dog-friendly canoe (and kayak) adventures in London with Moo Canoes

By The LondogSeptember 13, 2019No Comments 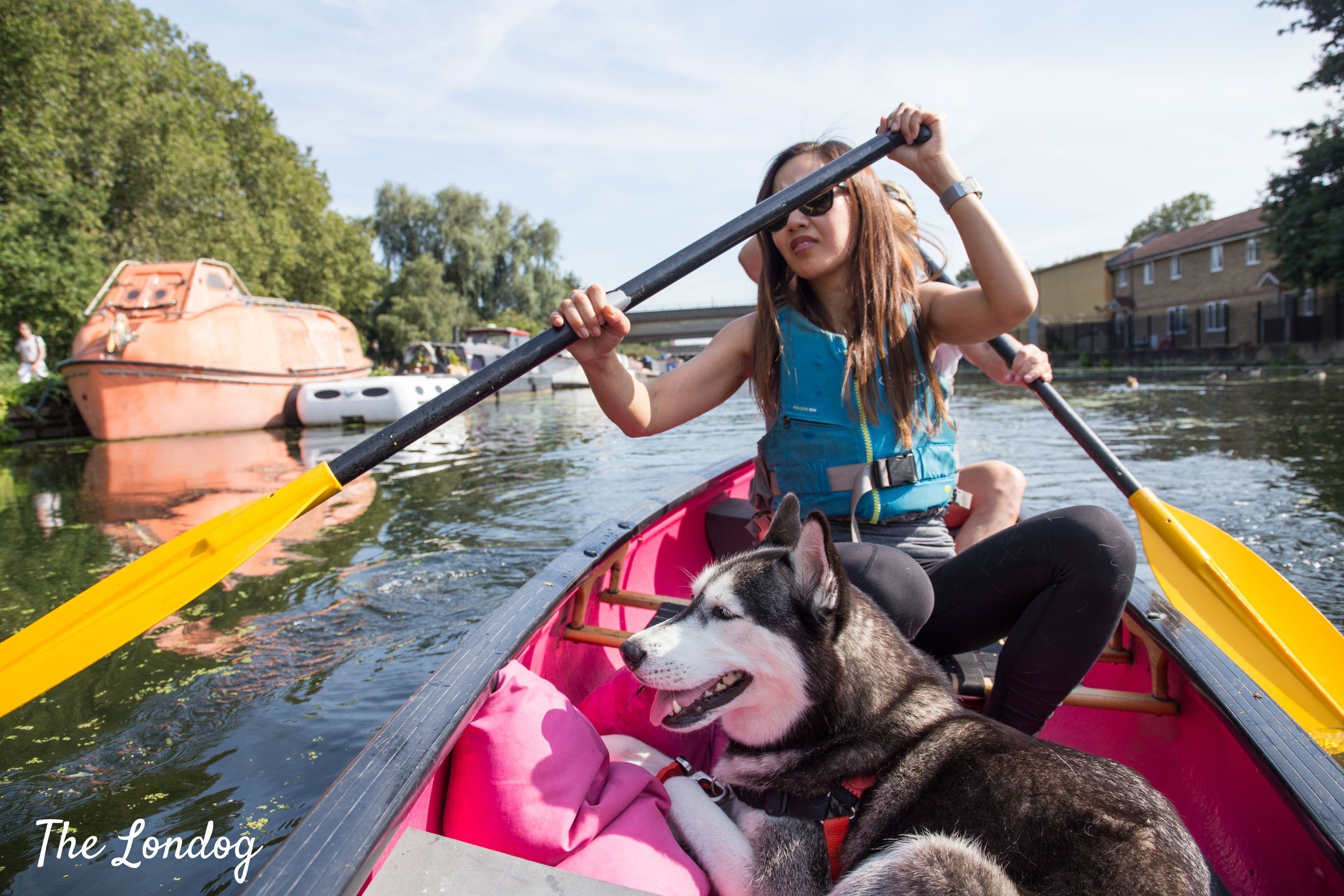 London canal network offers some unique and peaceful views of the city, full of colours, far from the busy roads’ hustle. You may enjoy walking on the paths alongside the canals, but, if you are looking for a unique thing to do with your dog, it’s good to know that you can slide onto the water with a canoe or kayak, and the best thing is that you don’t need to leave your four-legged behind. We were thrilled to discover that Moo Canoes offers dog-friendly canoes and kayaks for hire in East London, with an impressive range of routes to choose from. They invited us for a press ride and in this post we tell all about the experience and how to plan yours. 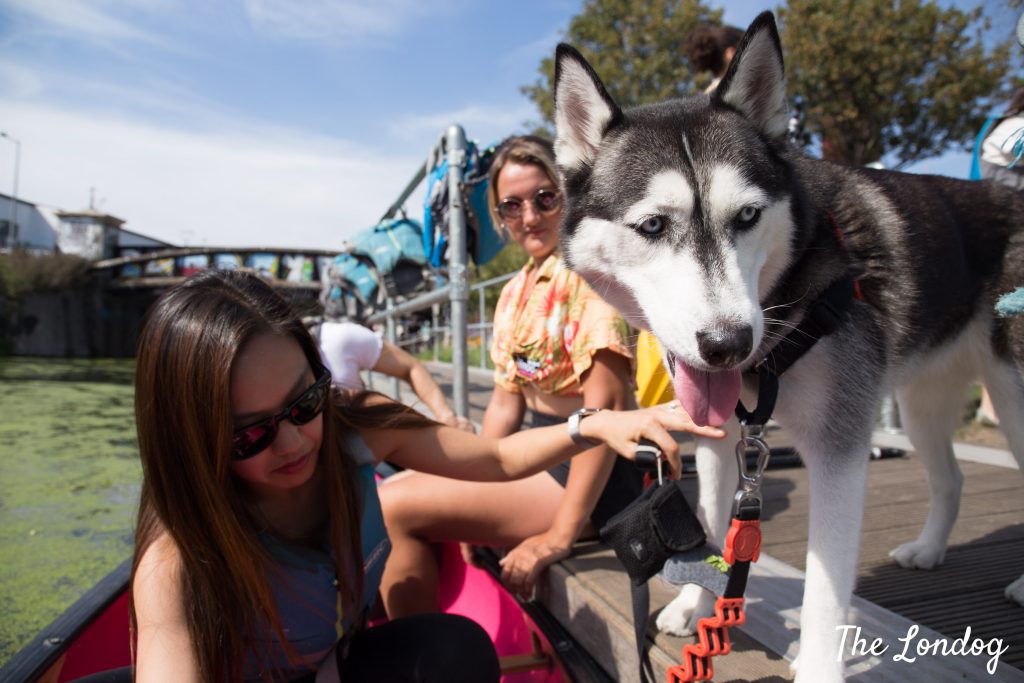 With two hubs in East London, Moo Canoes seems to be the to-go-place for water adventures on East London canal network: its Limehouse Basin’s hub is specialised in kayak hires, while their cool Hackney Wick hub rents out kayaks, canoes and stand-up paddle boards. Their team explains that the name ‘Moo Canoes’ emerged after bouncing around several ideas about herding fleets of canoes. They settled on the name as they felt it incorporated a sense of the great outdoors and was very striking. It appealed to adults and children alike and allowed them to create a family-friendly and easy to identify fleet of boats.

In fact, it’s easy to spot their boats along the River Lea or the Regent’s Canal: ttheir black and white patches and inner pink surface and their logo (which features horns with black and white cow patches) doesn’t really go unnoticed.

Moo Canoes was founded by Katy and Alfie after they had worked at a variety of different watersports centres. Katy’s dog, Fly, used to be highly involved in Moo Canoes and would often go out on the water with her. Unfortunately Fly has now passed away but Moo Canoes has held truth a love for dogs, and so both canoes and kayaks for hire welcome dogs, as does their lovely hub: The Milk Float in Hackney Wick. 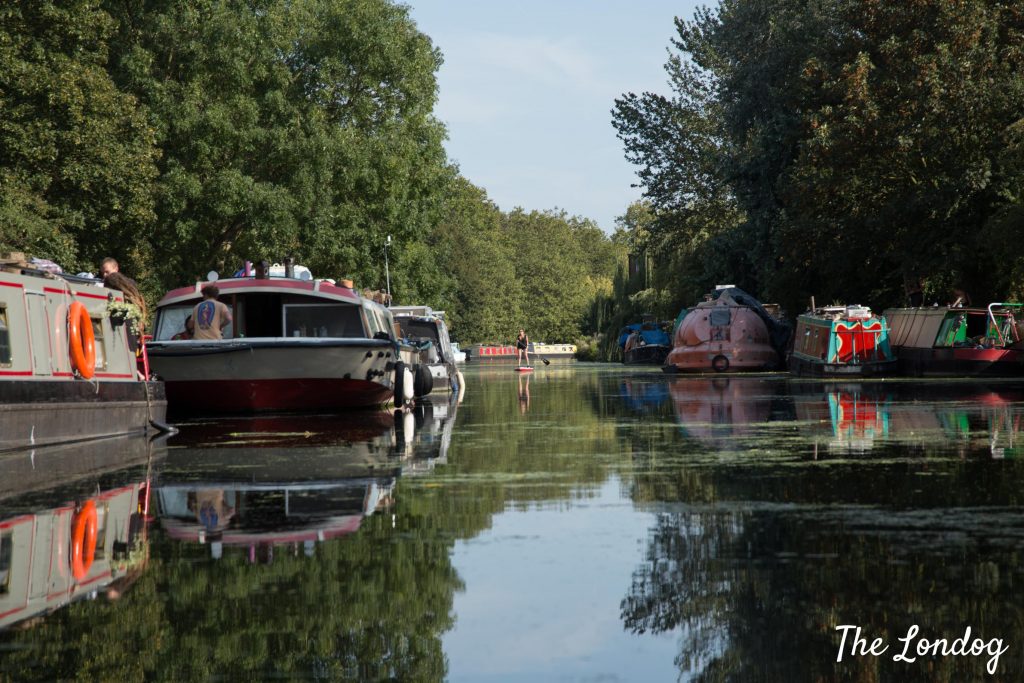 Unlike other water-based adventures in London, which allow for only one or two routes maximum due to the nature of the activity, with canoes and kayaks you can explore more of the canal network. Depending on how many portages you are willing to do, to get over locks, there are a variety of routes you can take. Moo Canoes provides some handy routes and maps, with indication of the level of difficulty and estimated time to make the most of your hire, and you can choose from routes on the Regents’ Canal or on the River Lea.

One of the concerns we had before going on the experience was if a dip into the canals was a likely occurrence. Moo Canoes’ crew  reassured us, “The boats are extremely hard to capsize, usually they only tip over when people are playing around or leaning far over. They are designed to be beginner-friendly and super stable.” After trying a canoe and surviving the experience without any unforseen swim, I feel that this is quite accurate.

Our experience on a dog-friendly canoe in Hackney Wick 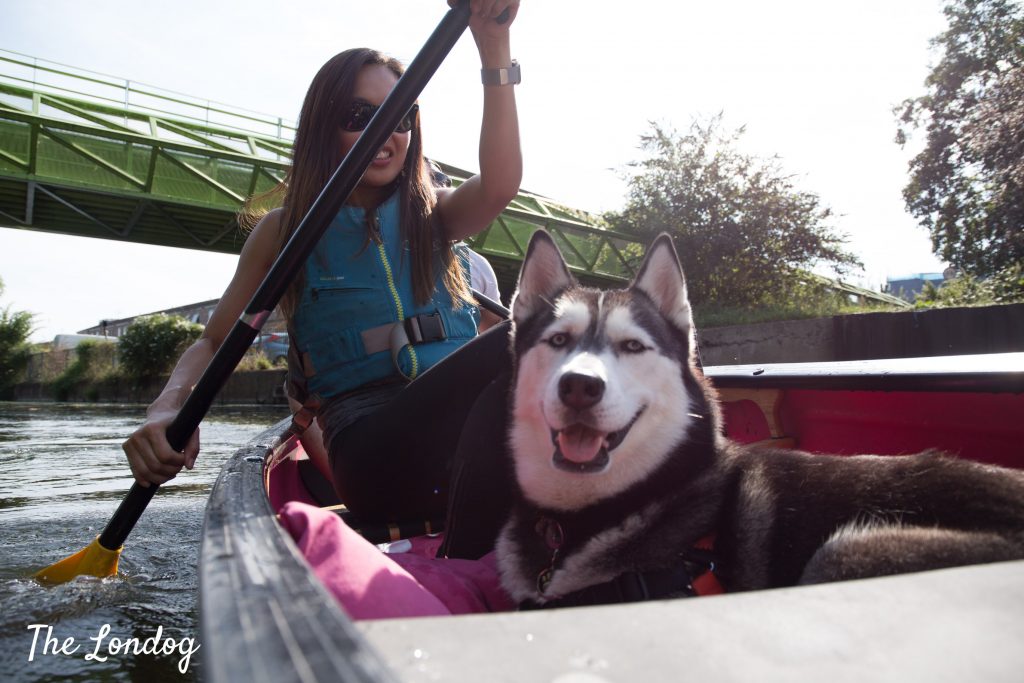 Our patron Juno, a gorgeous rescue husky from Korea, and her humans joined on the adventure and together we set off from Hackney Wick on a warm Saturday afternoon. I had been told that canoes could accomodate maximum 3 people, so before arriving I was a bit unsure about whether all the three of us would have fit with Juno, who is a 25 kg girl, or one of us would have to follow from the canalside. Upon arrival, we realised that we would fit just fine. 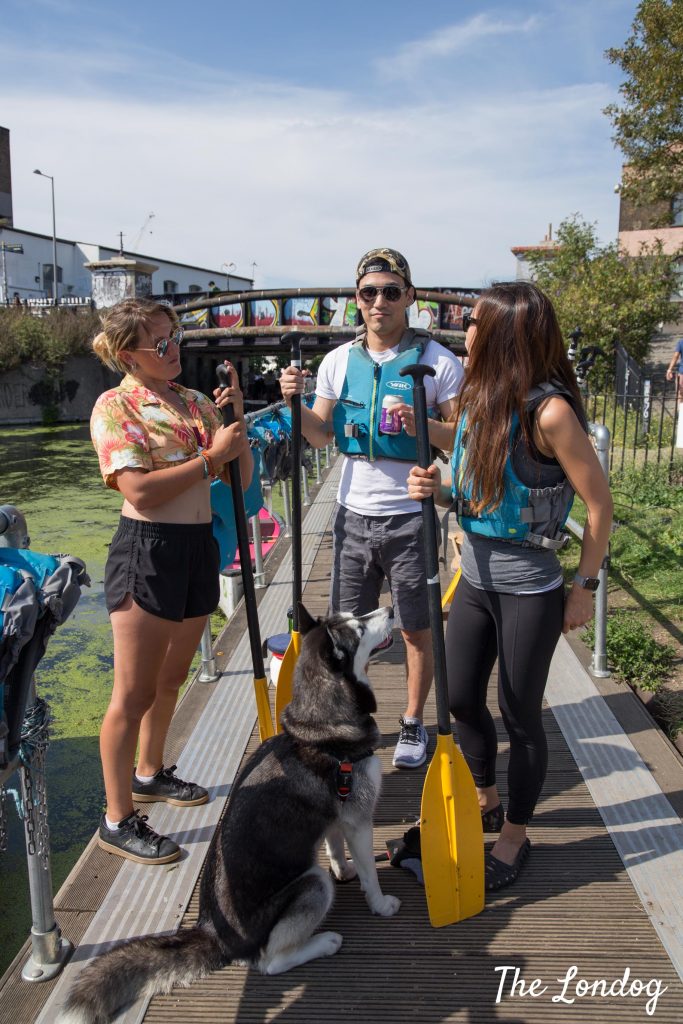 Moo Canoes’ crew made us sign the waivers and proceeded to explan the basics of canoeing and driving on the canal, assisting us with boarding. So that Juno could be more comfortable on the canoe, the crew gave us one of their pink bean bags for her, and we were ready to set off. As we started paddling, she seemed quite interested in the surroundings (and the ducks) and stood on the canoe, leaning forward a bit and glancing around. Luckily she didn’t jump off (like a dog had done before on another boat adventure) and the canoe was stable enough, but when she later settled on the pink bean bag, it was easier to keep the boat parallel to the water. 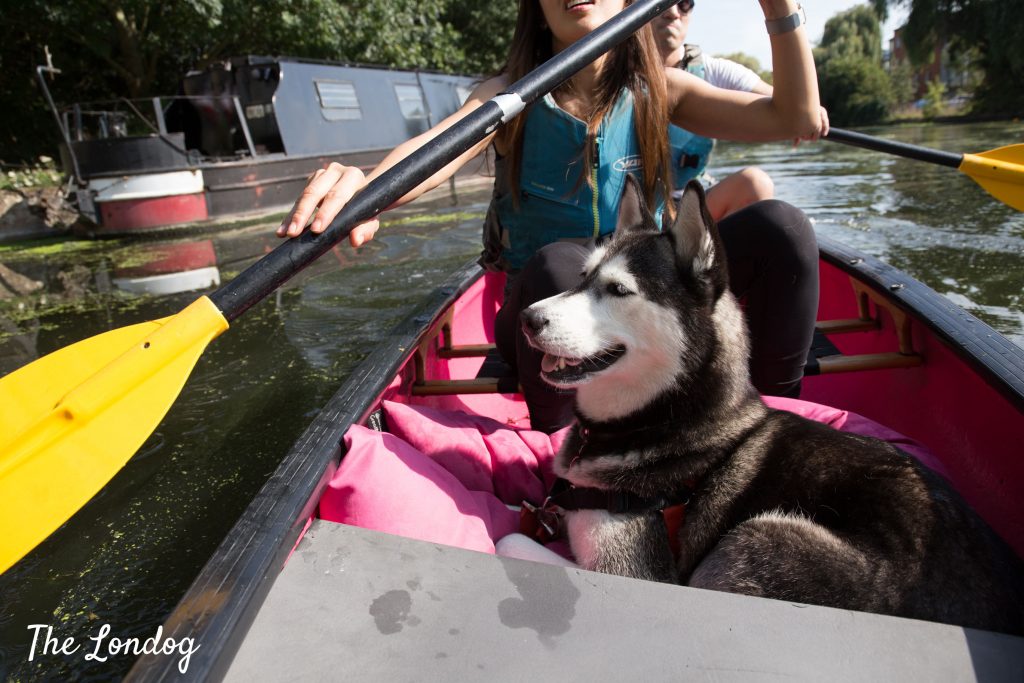 From the human side, at the beginning we found us zig-zagging along the river, struggling to paddle in a straight line, but mostly thanks to Dave’s skills and strong paddles, after a while we got the hang of it. It would have been a challenge without him! 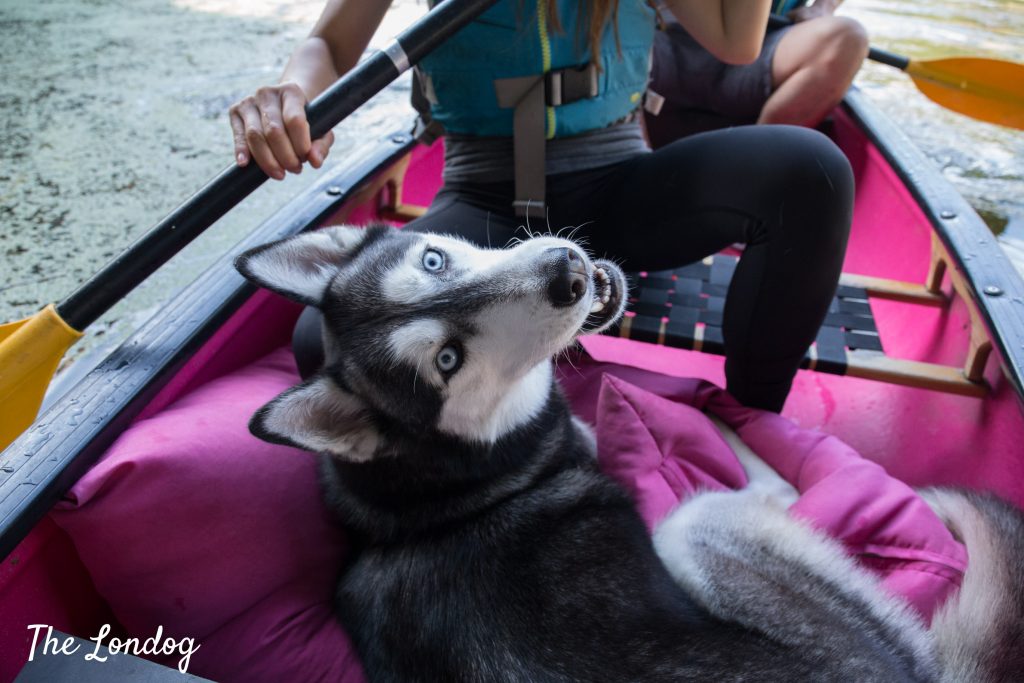 We headed North on the River Lea, sailing past Here East and Hackney Marshes, up to the Princess of Wales pub. The ‘Paddle to the Princess’ route is one of Moo Canoes’ crew favourites, as they recommend it as the prettiest and quietest paddle. It was indeed a lovely ride with relaxing views of house boats moored on the canalside, ducks, weeping willows, as well as some stand-up paddle boarders and other canoers. We also saw a lock, although we didn’t have to do any portages, luckily. 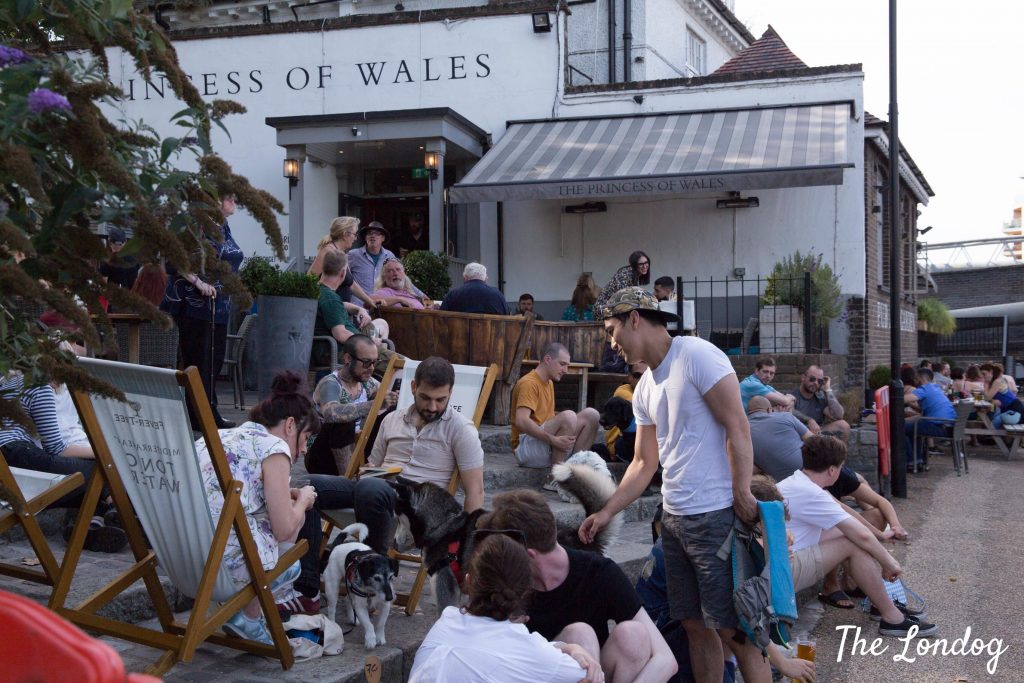 After a less than an hour paddling – some good physical exercise – we moored in front of the Princess of Wales and had a rest on the canalside, where Juno made friends with some other dogs sitting outside the pub with their humans and some children too. 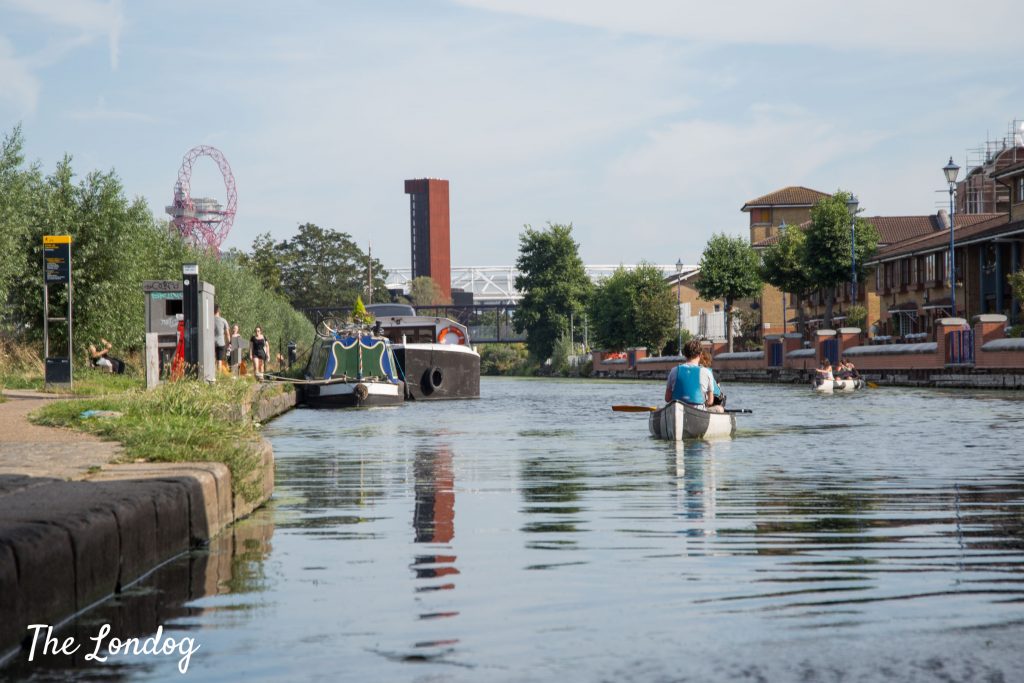 On the way back the light was soft and in my opinion the views were even more beautiful. Juno settled earlier than on the way out and she looked comfortable from her spot. To avoid any unexpected leap, her mum covered her eyes when we passed by a geese flock, just in case! She was such a good girl and patiently waited for the hand to be lifted. 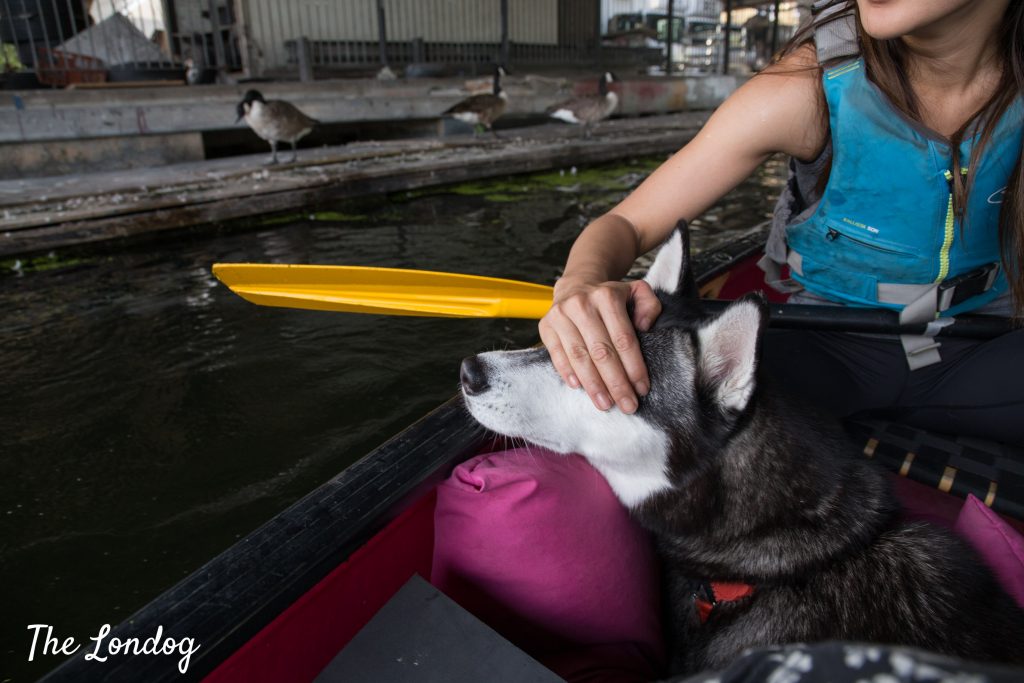 It was a fun adventure. What one should keep in mind is that there is some (mild) physical exercise involved and that going in a straight line requires some skill development. It can be a good one for dogs if they are confident on wobbly surfaces (although the canoe is pretty stable, so not much wobbling after all) and they are not water-obsessed, just keeping in mind not to go in the hottest hours in Summer, as there is no shade for them. This can be the perfect season, as it is still warm, but not too hot, and the colours are beautiful. 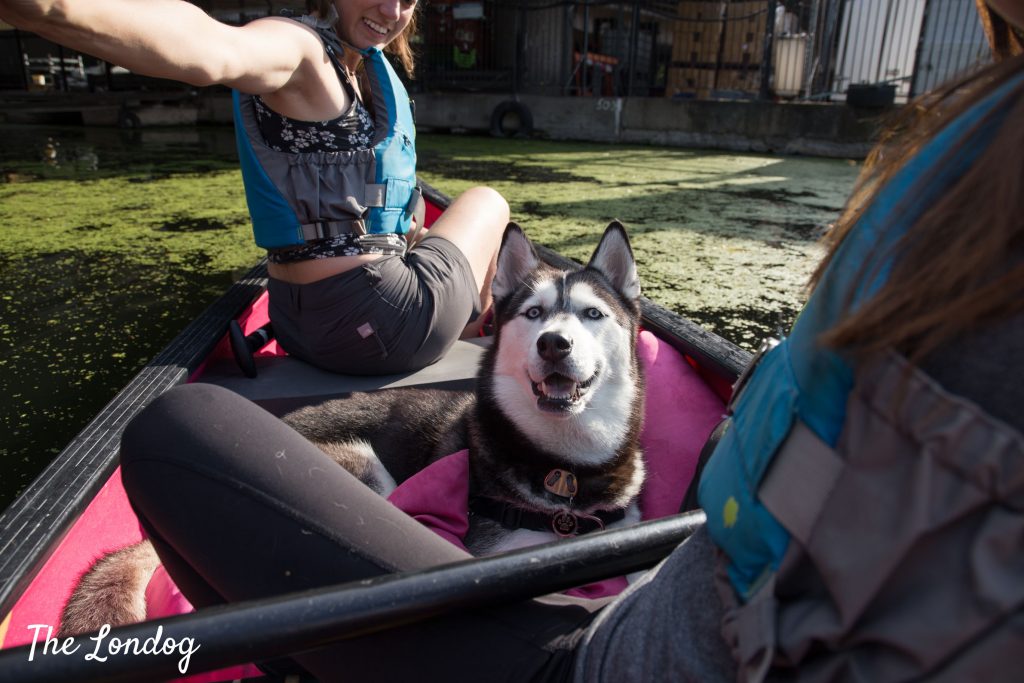 The Milk Float and dog-friendly neighbourhood 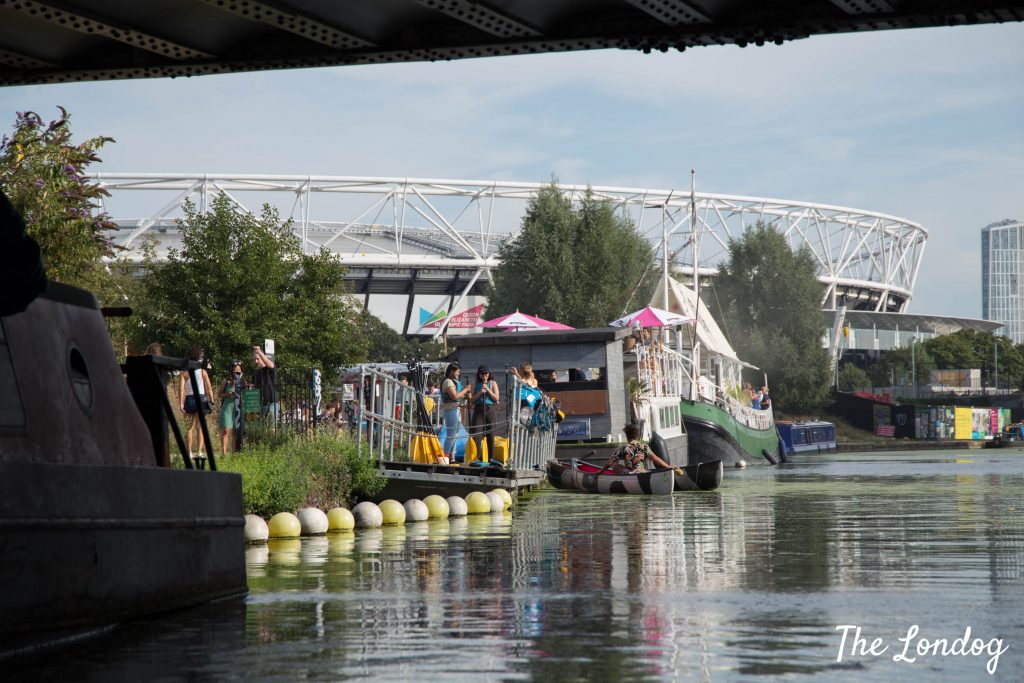 We haven’t yet visited Moo Canoes’ Limehouse Basin hub yet, but the Hackney Wick one, based at The Milk Float bar, is really cool. The Milk Float is a boat where you can have drinks, ice-cream, and snacks; its roof with fake grass and colourful pink bean bags is a lovely place where to enjoy a late afternoon, and dogs are very welcome.

If you are thinking about a full meal, moored next to the Milk Float, there is the Barge East, a beautiful (dog-friendly) boat offering lunches and dinner menus (we are going to tell you more about it on the blog later). Hackney Wick is a cool area, and dogs are welcome in many pubs, eateries and bars along the canal too, such as Crate brewery and Grow. Just keep in mind that in the evening they become extremely crowded and put on loud music, so it’s not a good place to bring your pooch at that time. If you walk along the canal, heading North, in front of Here East, you will find dog-friendly Shane on the Canal (which also hosts dog brunches) and Gotto Trattoria (an Italian eatery, very dog-friendly and very nice staff, but not one of the best Italian places we have eaten at in London to be fair).

You can also have the Olympic Park nearby, which is perfect for a good stroll. 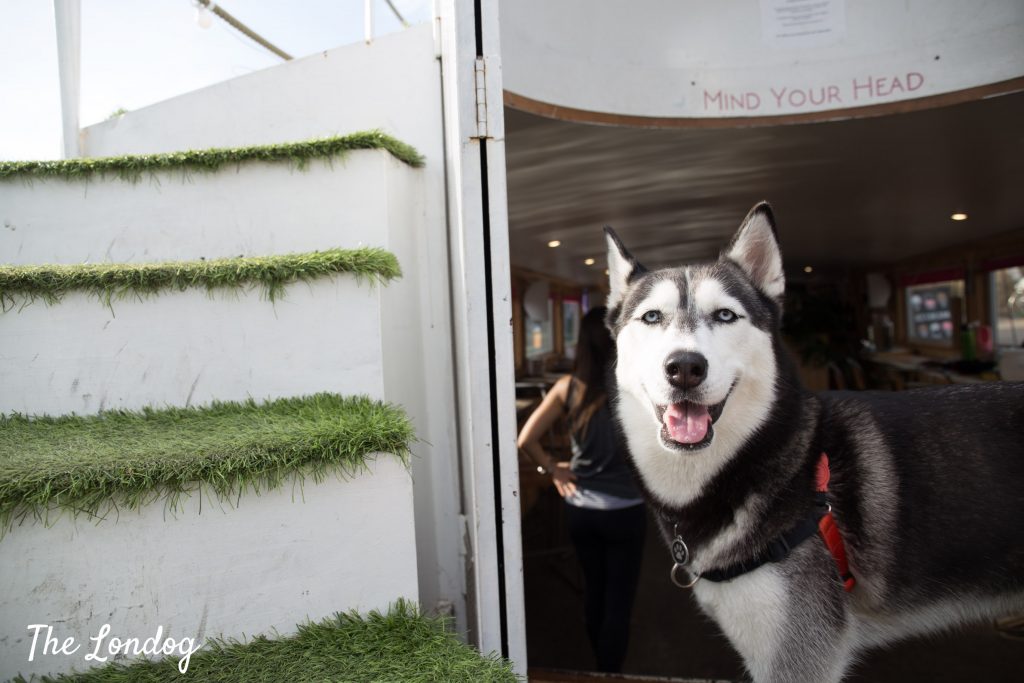 Where and how to get there

10am – 6pm every weekend as well as most bank holidays. Prior online booking.

Moo Canoes provides buoyancy devices for humans + a small watertight barrel (your phones and wallets will fit in there). Make sure you bring:

COME ON AN ADVENTURE WITH US: become a Patron today