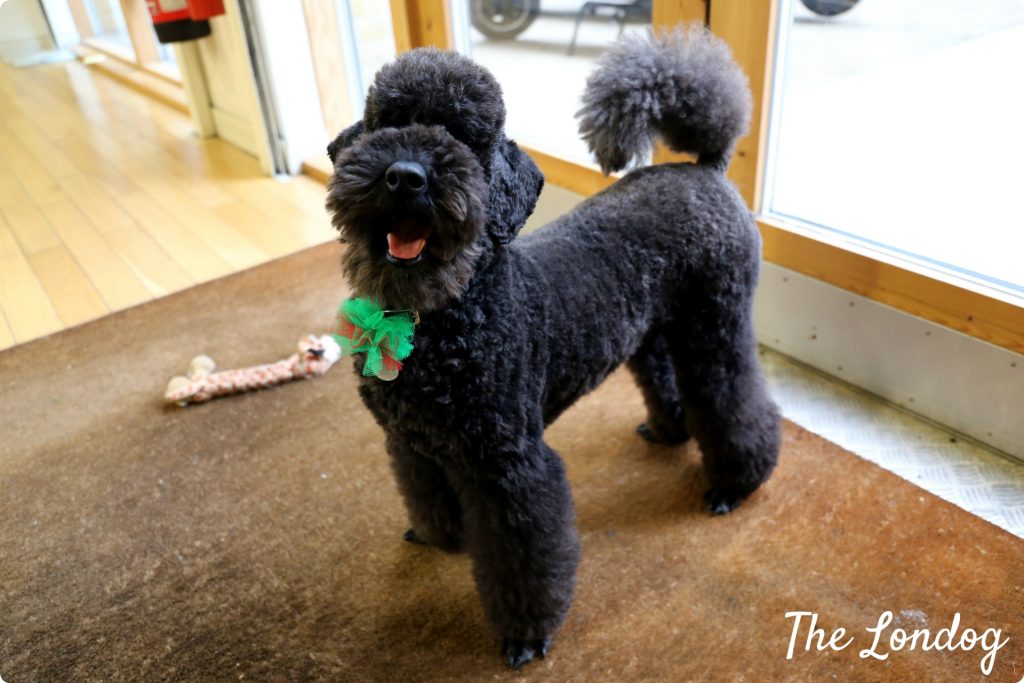 S triker is a miniature poodle who will turn three just after Christmas. He acts as resident dog at OPX, a design consultancy based in the vibrant Hoxton. If you go and visit their offices, you might find Striker staring at you from the front glass door. Well, unless he is busy offering his best sit or trick to try and gain a piece of chicken or cake from anybody hanging out in the kitchen.

Of him they say that he does not think he is a dog. And this seems quite true, judging from his favourite spot, right on the back of the chair of Ness, his owner. “He is very smoochy; he loves to cuddle and is happier when he is on the back of my chair. He basically works from there every day. He also has his own house under my desk, where he goes when he wants to chill, but most of the time he sits on my chair. Apart from lunch-time when he is checking around if anybody has any chicken!” said Ness.

You might also find Striker having a great time with some recyclings. “He is such a character, very loyal and indipendent. He is really goofy and loves to destroy tubes. Then I first got him, the breeder said that the thing that he most loves in the world is the loo roll, and he wasn’t wrong. He loves loo rolls. Any recyclings, he would flatten them down and destroy them in 100 pieces. Also in the office, right in front of the front door,” said Ness. 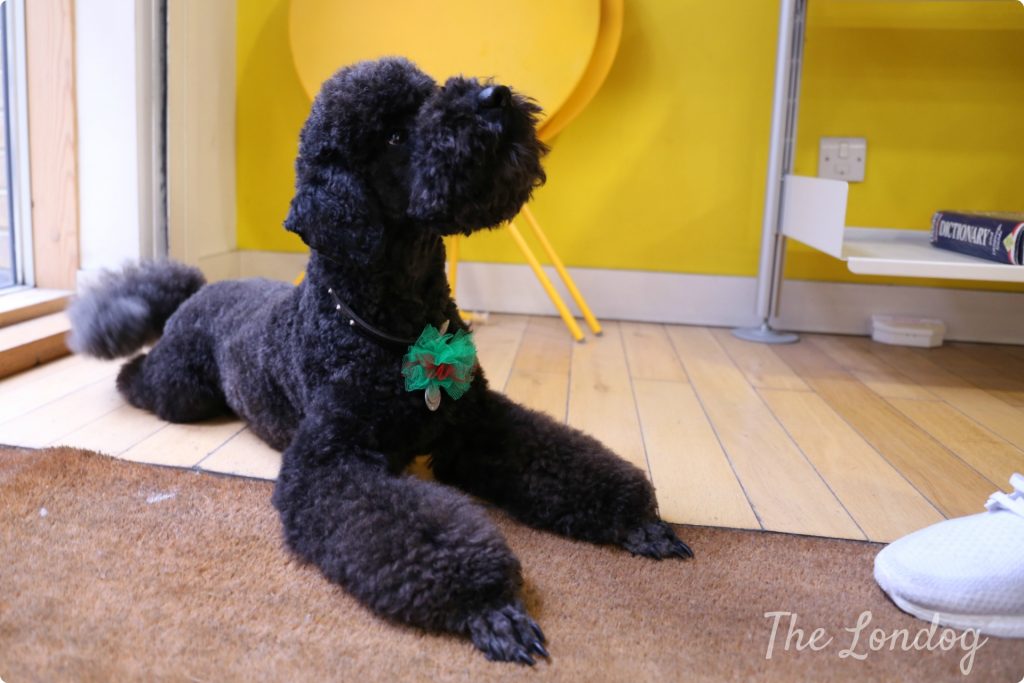 The team has taught him a host of tricks, including barking loudly and quietly, and I was showed a hilarious demo of his talking abilities when I visited the office. “He can regulate his volume, talking loud or quite, and will walk around on two feet”, added Ness. “Really likes cake. He is quite chilled out and extremely happy to be here during the morning: says hi to everyone around the coffee machine!”

Ness got Striker when he was ten months old and took him to the office ever since. Before deciding to take a dog, she made sure that she could have him joining her at the office, because she would not feel like having a dog otherwise.

“I really wanted a dog so I spoke to the directors about it and there was a group meeting, because also other people wanted a dog, but they thought that we could have only one dog at a time”, recounted Ness. “I was ready to get one, while other people weren’t, so it happened. Many of them now borrow Striker as well. For example, when I go on holiday he goes and stays with other team members who thought that they could not have a dog and work full-time.” The team loves Striker and sometimes Amazon parcels turn up for him, full of dog treats, from another team member. 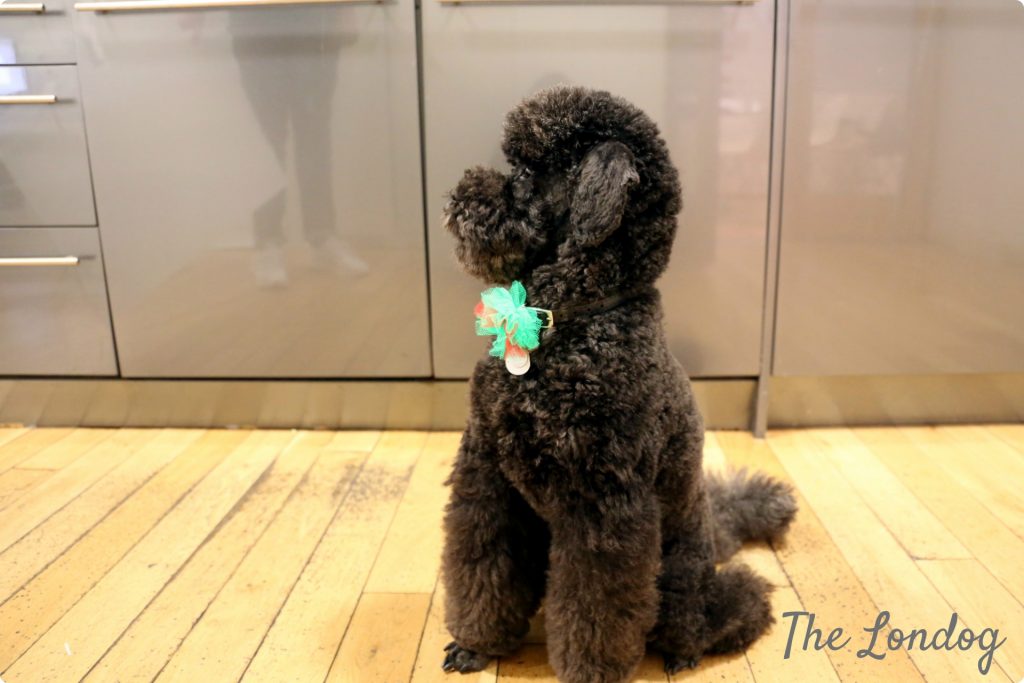 Did anybody say “chicken”?

“Having a dog around which you can talk to, cuddle, take around the block, is really therapeutic. And adds to the kind of nature of the studio”, noted Ness. “Of course there was a curve when he was new and was challenging. We had to go through some training, also for the staff. But he is such a good boy, willing to learn and to please people all the time. So it was quite a short adjustment period, really. It is very quiet when he is not here. A bit too much.”

Striker loves to be photographed and Ness revealed “earlier this year, we were having a photoshoot for a jeans campaing and he was very jealous that everyone else was having pictures and he wasn’t, so we dressed him up and put him in front of the camera. He LOVED it! He likes to model, it’s hilarious!”

You might still wonder why Striker’s nickname is ‘digital poodle’. “Digital poodle came about because I am the lead of digital at the studio and Striker is my sidekick. He also hates paper!” said Ness. 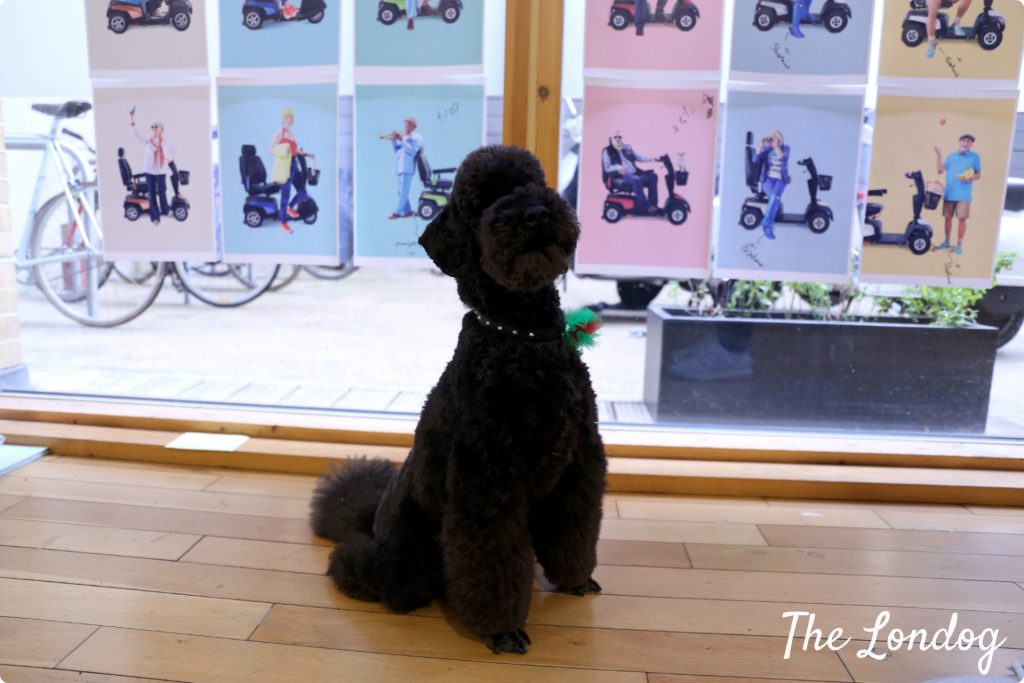 Apart from Striker, at times Lola, a springer spaniel owned by Frances, the Director, comes in.

Frances told The Londog, “We bring Lola only occasionally, because she is not a city dog. We live out of London and she is used to the lead but most to run around. When we first started bringing her in, she wouldn’t wee or poo on concrete, since she is not used to it. She is used to going to an edge. This was quite funny: she started crossing her legs and we had to take her to a piece of grass.” 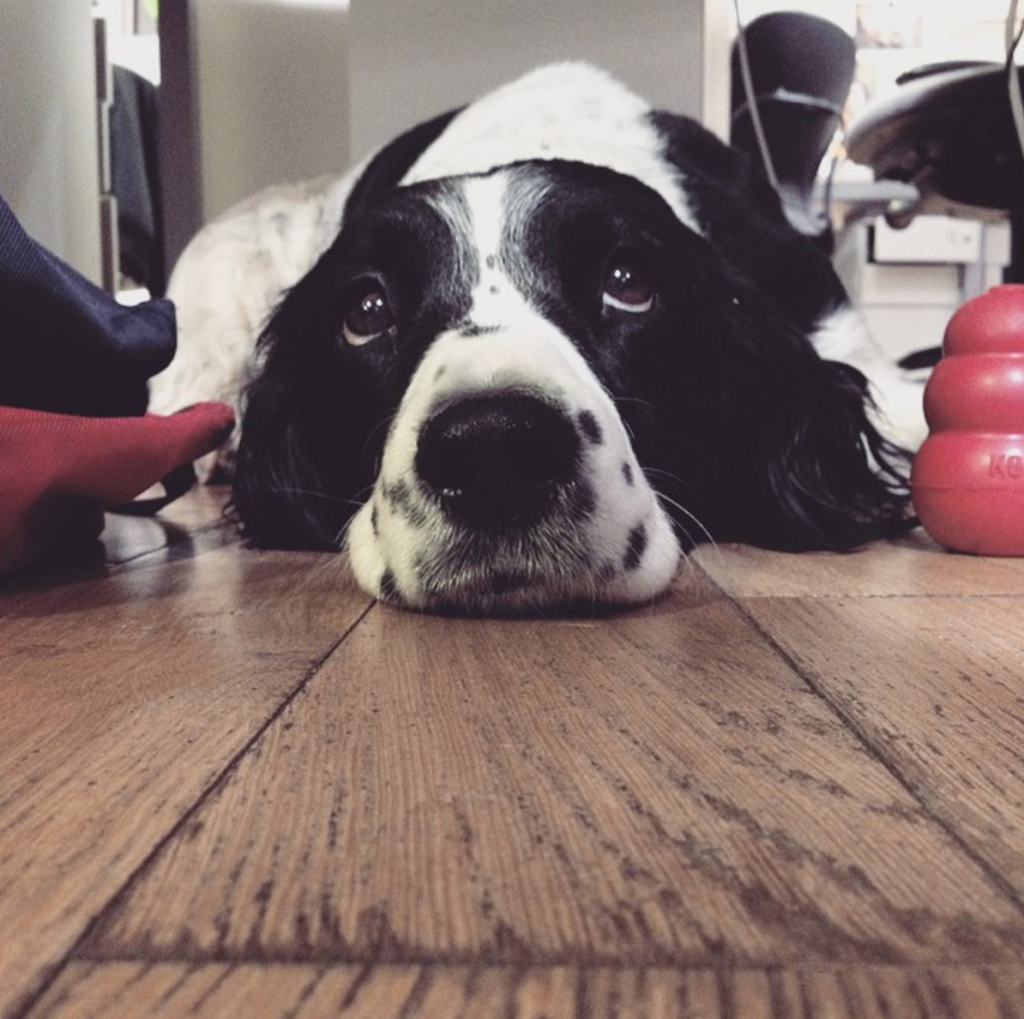 A bored Lola in the studio – Picture courtesy of Frances

“I think what is interesting is how other people respond to you having a dog,” continued Frances. “I think some people really love it, some people are less engaged with the dog. Weirdly, other people seem to quite like that we have a dog in the studio, unless they are anti-dog people, and we are quite mindful when clients come in, just to be a bit careful: clients usually don’t mind the dog being there, but Striker can be bit barky, and clients tend not to like being barked at by dogs! There are people in the studio who actively say that it is therapeutic, and I know that Strikers gets to stay with other people too.”

About the three things she loves most about having a dog in the office Frances pointed out “It makes it more human, warm and … different. It gives you a different perspective. And it is much us, as a creative studio. I am sure that if you were in a more formal studio, then it would become tricky. But it complements us. Of course it needs to be the right dog. You have to respect people who are not as comfortable with dogs, so you need a dog which is quite well trained and happy in itself, so that it respects other people’s space as well.”

Follow The Londog and be ready for tomorrow’s Office Dog story!