By The LondogFebruary 6, 2019No Comments 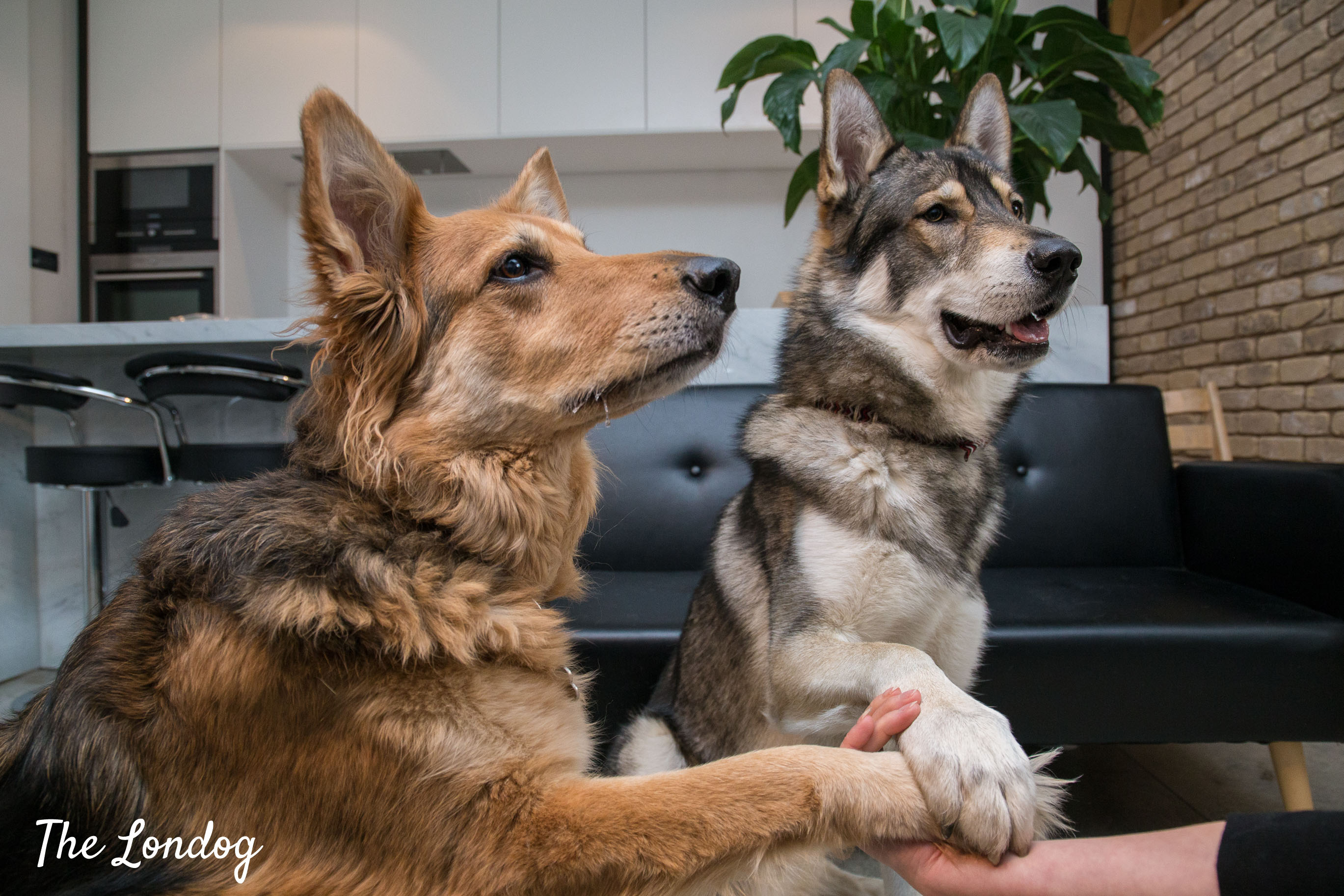 Tessa, the German Shepherd Collie mix, and Winter, the Czech Wolfdog Malamute cross, fill up the ranks at Formations House, a first formation agent and accountancy based in Marylebone, London, as office dogs in charge.

Tessa and Winter the office dogs of Formations House 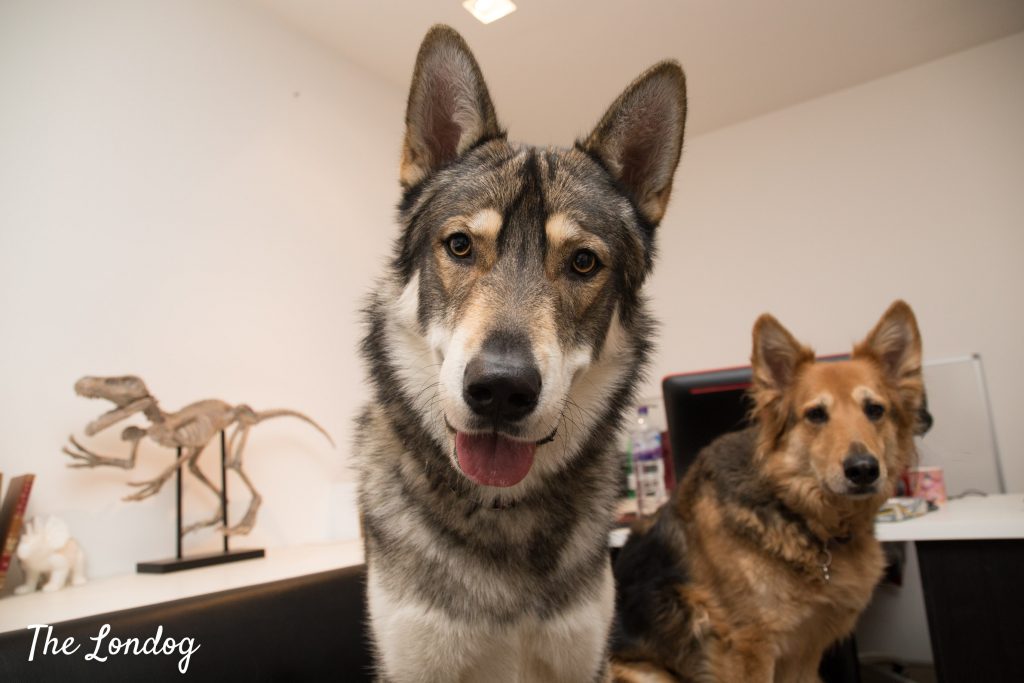 As I walk in at Formations House’s offices, in a two-floor elegant building tucked away in a quiet street in Marylebone, Winter peeks from behind the door for a greet, while Tessa is intent slurping from a dog bowl placed below the coat hooks. With their 22 and 38 kgs (and growing) respectively, they have a big presence, and it is lovely to see them roaming around the anteroom. We make our acquaintance before heading upstairs to the workspace. 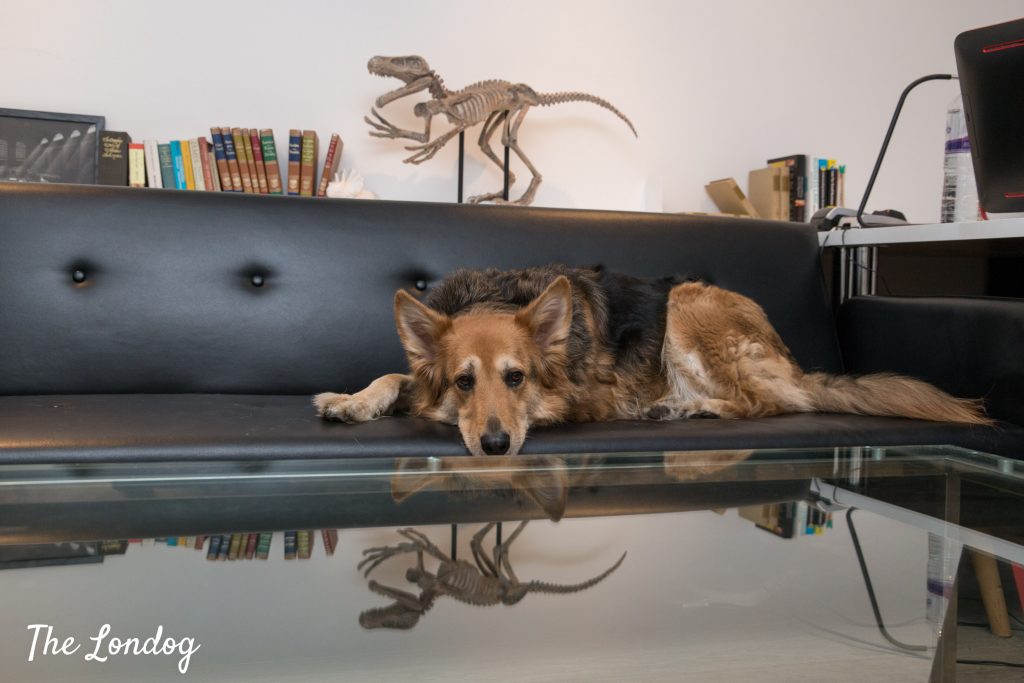 Tessa is the senior office dog. She celebrated 8 years of age on Christmas Day and has a record of going at the office since she was one, so she is very chilled out. “Tessa is a very friendly, smiley dog and likes to hold hands with people. Great at balancing treats and other items (office stationary etc) on her nose. Very good when walking, doesn’t bark much at other dogs, seems like an angel but the moment we cross a threshold into a park she gets all vocal and loud and wants to play immediately. Great at football,” says Charlotte.

Tessa is also known for…

Loving: Chicken, taking the eyes off soft toys and then filleting them, football
Hating: Nothing, but is scared of many things including the paper wrapping on straws, mice, bubblewrap (even if its in tact and not being popped), bubbles in general and many other mundane items.
Funniest habit: When I get to the office she hurtles towards the sofa in the kitchen with such force it slides across the floor, and then insists we hold hands for a good few minutes
Most annoying habit: Her food obsessed, begging face. The woofing like a lunatic once in the park. Her fur gets everywhere
Most famous/infamous episode: When we replaced the office sofa and I said she couldn’t go on it in case her claws tore it, but everyday for a week she just put her head on it and look at us all until we gave in… it’s on reddit still. 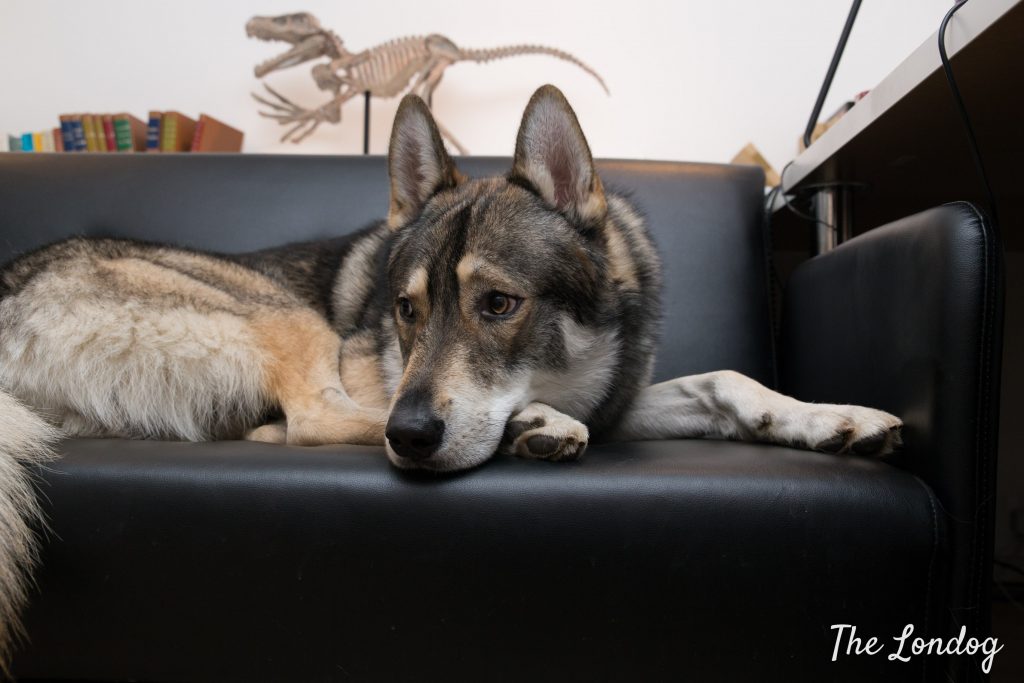 When you see Winter you wouldn’t guess that he is a big pup, only 15 months old. He is the new kid on the block and was 3 months old when he started showing up at work. Charlotte notes that he is very friendly especially with all other dogs (any size). “Has almost no interest in dog toys which can be annoying but does love a soft toy to nuzzle”, recounts Charlotte. “When he runs in a field with long grass or if he jumps over something, he hops like a kangaroo and its very funny to see him bouncing like Tigger in fields. He is naturally protective around small children (if he hears them cry he wants to go and see them and cries until he can lick them) and me and my daughters. He rarely barks, howls occasionally though if either me or my partner go outside and he hasn’t come with us, then there is a bit of mopey howling.”

Winter is also known for…

Loving: Other Dogs (especially Tessa and Lyanna) and Ice Cream
Hating: Unfriendly dogs, deep water and the Hoover
Funniest habit: Jumps straight on the bed once its freshly made, pats other dogs and people on their back to get them to play
Most annoying habit: (see above) & his separation anxiety
Most famous/infamous episode: I cant think of any one off ones, as he is generally a silly doggo.. his utter embarrassment at being carried on an escalator when he was already 34kg, getting scared of a lady sneezing on the train. Getting scared of the toilet on the train. Getting scared of a cushion with a wolf on it. Getting scared of a paper bag in the garden. You see the theme! There was the time that one of our guys brought in a birthday cake made by his girlfriend. He put in a far corner on the counter. Winter being so tall, managed to slowly pull the plate towards the edge, the reach up and take a bite from the corner… he was fine after, but the explosive poop on the way home wasn’t pleasant to pick up.

A day at the office for the hounds 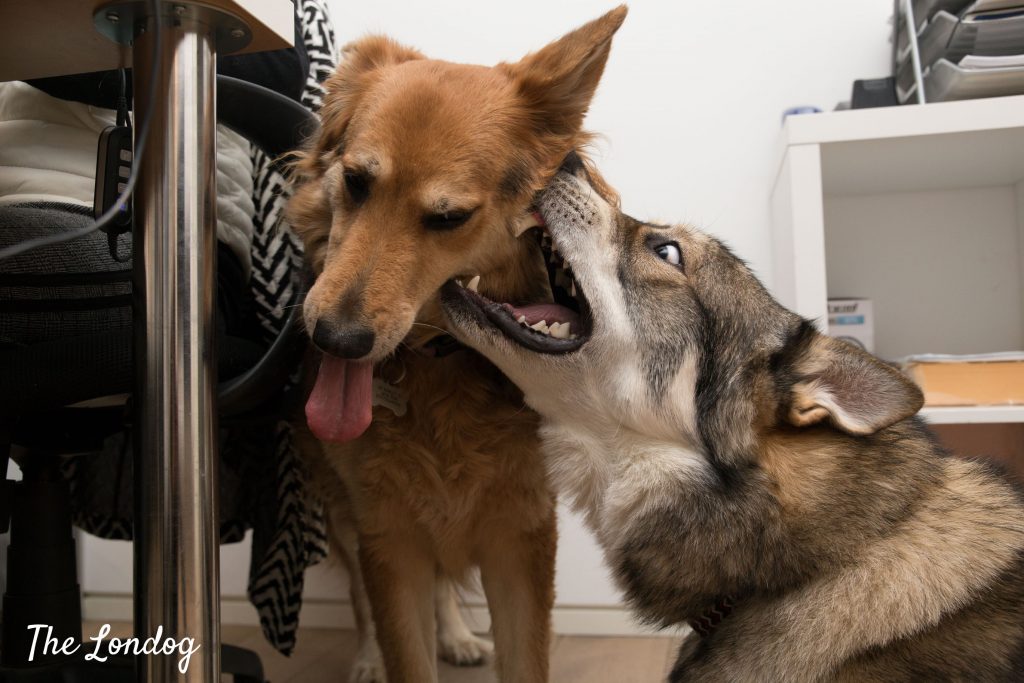 During the shoot Tessa at some point retires to a spot next to the printer, and lies down resting her chin on her paw. Charlotte tells me that it’s her favourite spot and during her days at the office she often ends up there. Charlotte continues, “Tessa has a morning ritual with me where after the hand holding she follows me up to my desk and I give her a morning treat and make her balance something. Then she likes greet all visitors who come to office. She has a couple of small walks through the day. In the summer she prefers to sit on the atrium glass to stay cool.”

I observe Winter as he playfully nibs Tessa’s neck and muzzle craving to engage in a play session. Tessa tolerates it, but you can tell she is patiently waiting for a time-out. When Winter is at the office, once or twice a week, the day goes a bit differently. “Winter comes [in at the office] once a week and occasionally twice [a week]. Once he has had a morning play with Tessa they both settle down,” recounts Charlotte. “During the Summer, either me or Tessa’s owner Darius take them for a couple of hours to the park to play, but during the last two months, due to being a little more busy, I use a local dog walking service instead and book in advance when I know we will be too busy to take them ourselves.”

Charlotte unfolds a plastic bag, revealing some slices of ham and suddenly all ears and eyes are on the prize, as they work for the treats. At first sight, Winter very much resembles a pure Czechoslovakian Wolfdog for his colours and fur, but it is when you take the time to observe his muzzle, that you see that it is a bit shorter and less pointy than the Wolfdog’s, and you start seeing the Malamute in his genes. They are both very sweet and it is amazing to see them giving their paw “holding hands” with Charlotte, like proper musketeers! 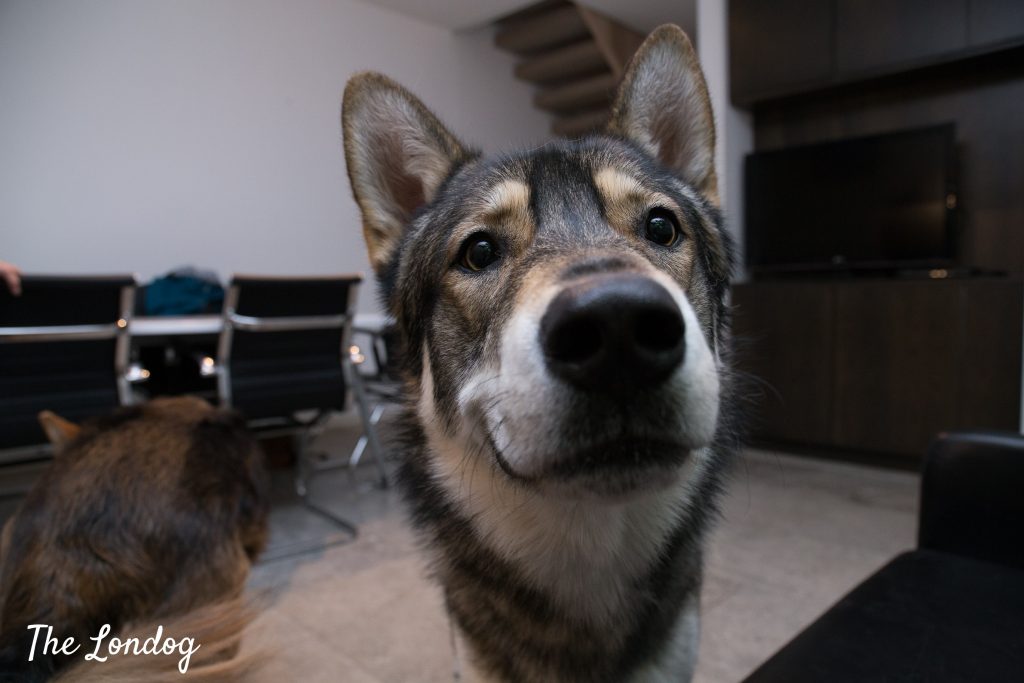 When it comes to commuting, Charlotte and Winter generally  leave the office slightly before rush hour to avoid the crowds, or once a month arrange to meet friends for a quick drink in one of the dog-friendly places in Marylebone or Fitzrovia. On the way in, it can be a bit more challenging, but according to Charlotte Winter is ace.

“The first train is often very packed and I try and stand near the luggage rack, but he knows when its busy just get close and lay down, he doesn’t however counter on his size and takes up a space,” she says. “Then at Liverpool Street he walks through to the Metropolitan line with me perfectly, rarely distracted and knows not to run up or down steps. On the Metropolitan line he is happier as it’s cooler. In both trains he knows when it’s busy he has to stay close but if it’s not too busy or empties he can say hello to people if they want to, and then he comes back to me each time when the train stops again. Generally people are friendly and many comment it makes their day as he is such a friendly dog. Some don’t like it and I try and keep him away so they don’t feel nervous. But Winter’s tail has a habit of getting in people’s faces and it’s often amusing. He enjoys the journey a lot and I can see him taking in so much detail. It’s good for him to meet so many people and even other dogs on the journey. And also learn when he can’t say hello to someone.”

The benefits of dogs at the office 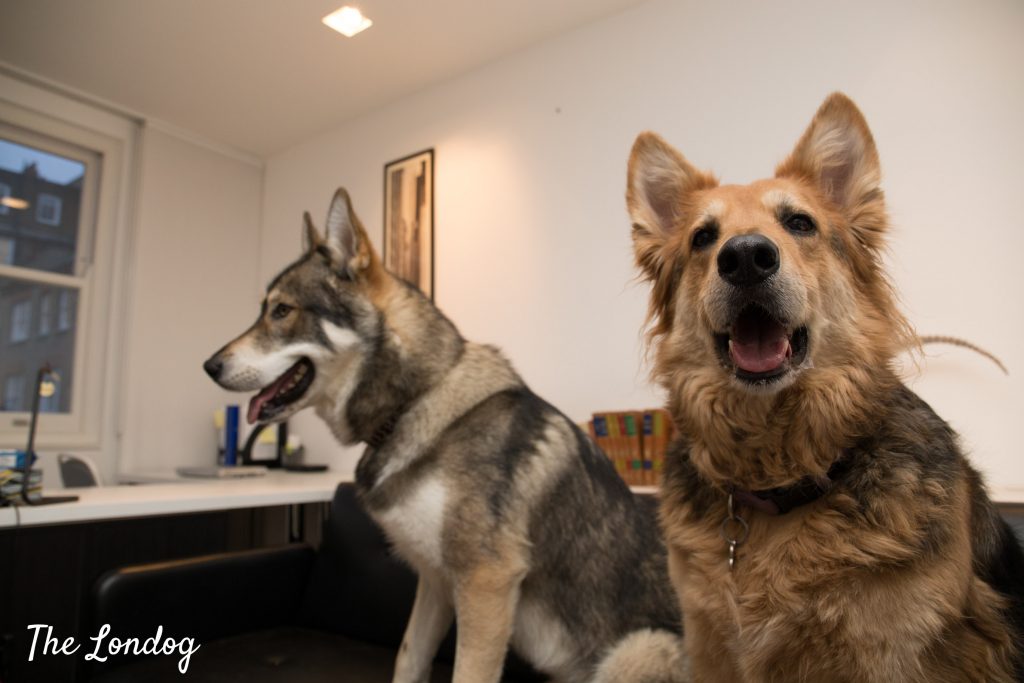 Tessa and Winter have had a three-fold impact at the office. Firstly, they brought a positive effect on the team. “The team love having a dog in the office on a daily basis, it’s a therapeutic distraction when its been a busy day. Also it’s nice to have constant company and gives an excuse to go stretch legs as everyone is welcome to take any dog outside for a short walkie,” says Charlotte.

As can happen in any office, though, a member of Formations House’s team used to be scared of dogs. However, a 7-year acquaintance with sweet Tessa helped her overcome her fear, a she is now more comfortable around dogs and adores Tessa, recounts Charlotte. “Winter has proved more of a challenge as he is much bigger and more bouncy as a puppy, we try and handle it in the same way as we did when Tessa was smaller, and the team member has the option to work from home when she feels she can’t concentrate, but slowly she is gaining confidence being around Winter, as she knows he is a very friendly dog.” 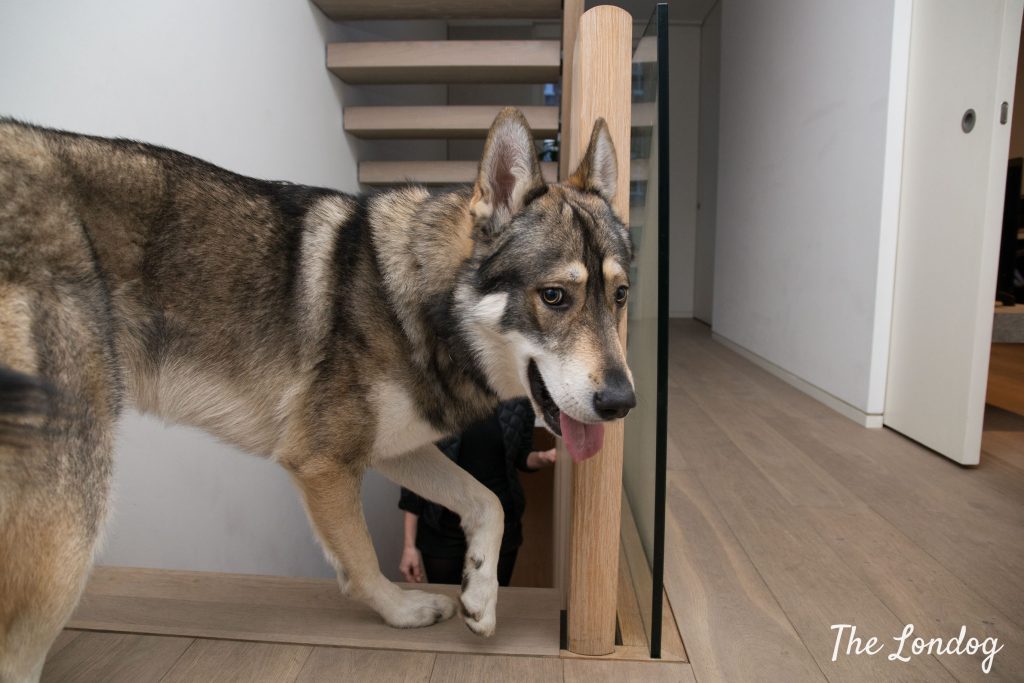 Secondly, having dogs at the office also had a positive impact on the business itself, notes Charlotte. “Most of our clients love dogs and, in fact, I think us having dogs in the office has won us many customers as there is a feeling of trust and personal business service. For our [business] where we are providing a professional business service, trust is a big factor in our clients choosing us for the accounting or business administration, having the dogs creates an environment where our clients often have more trust in us purely because we have the dogs in the office…” explains Charlotte. “It’s hard to explain why, but I believe it also sets us apart from the old-fashioned way of accounting and makes our customers feel we are more in touch with modern business practises and more interested in supporting them as growing businesses and not just an impersonal service.” 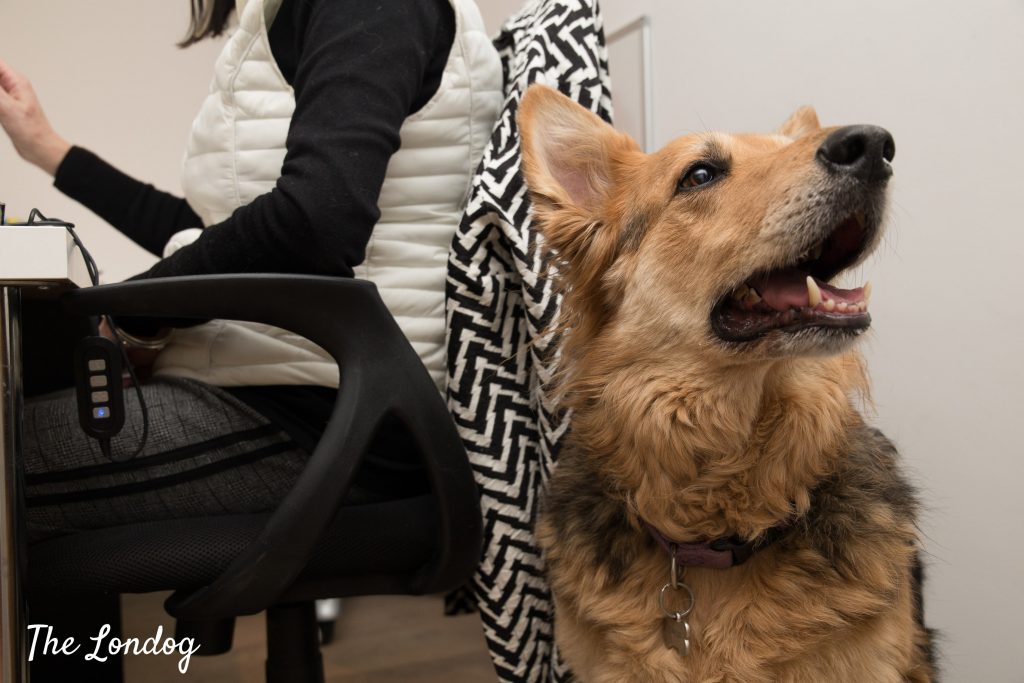 Of course they accomodate clients who may not be such fans of canines. “We do have a small number of customers who do not like dogs, and the dogs know that when we tell them to go upstairs they have to right away and stay there until we let them know. A couple of such customer have over the years become accustomed the us having a dog in the office and are relaxed more about it,” addes Charlotte.

Finally, being office dogs means a lot for Winter and Tessa too. “It’s really important for the dogs, they get so much additional socialisation and mental work, they thrive. They also learn good manners which I think is important for dogs,” comments Charlotte. 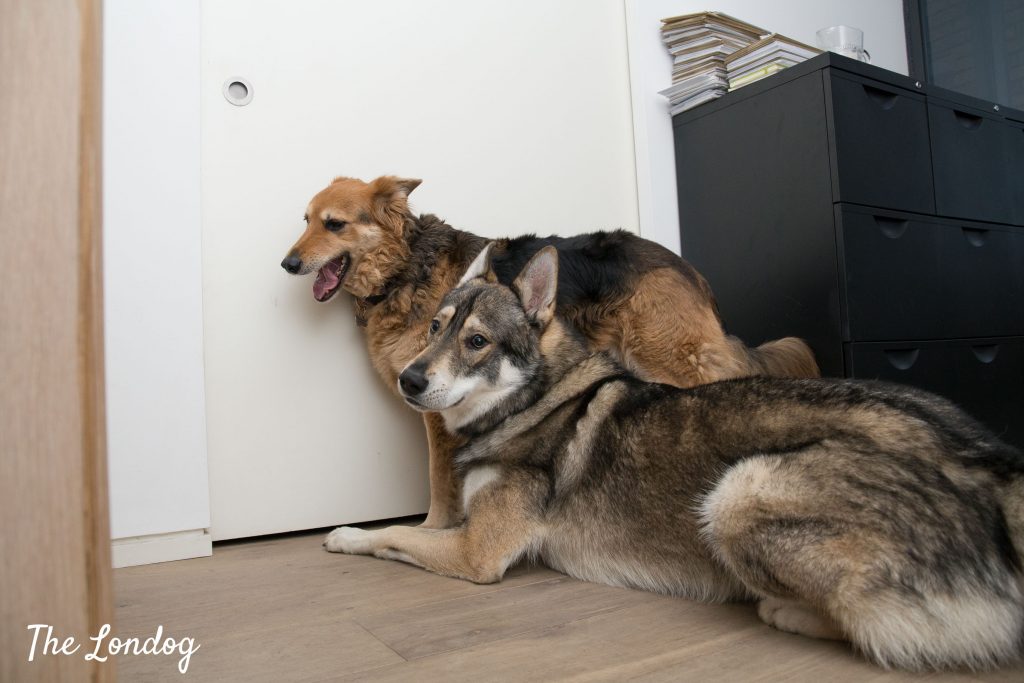 Charlotte gave her tips for working it to work. 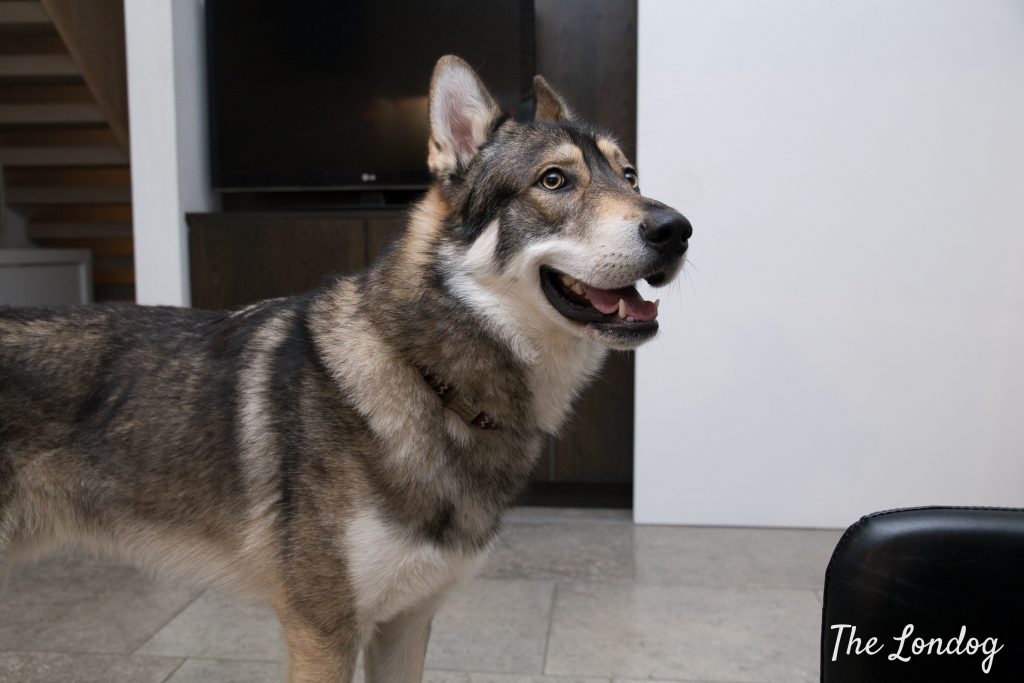 Tomorrow on the BLOG meet Buddy the German Shepherd from The Kennel Club.