Stories: Hamish MacInnes and the founding of SARDA

Dr. Hamish MacInnes, born in 1930, is an expert and renowned mountaineer, climber, documentarist and inventor (he designed the first folding stretcher and the first all-metal ice axe). Hamish developed the modern mountain rescue practices and is considered the father of the Search And Rescue Dog Association (SARDA). In 1965 and in 1980 respectively, Hamish received the British Empire Medal (BEM) and Order of the British Empire (OBE) for his services to mountaineering and mountain rescue.

This blog post – the first in a series of “stories” – focuses on how search and rescue dog training methods were first introduced in the UK by Hamish MacInnes and discusses the events which led to the founding of SARDA. 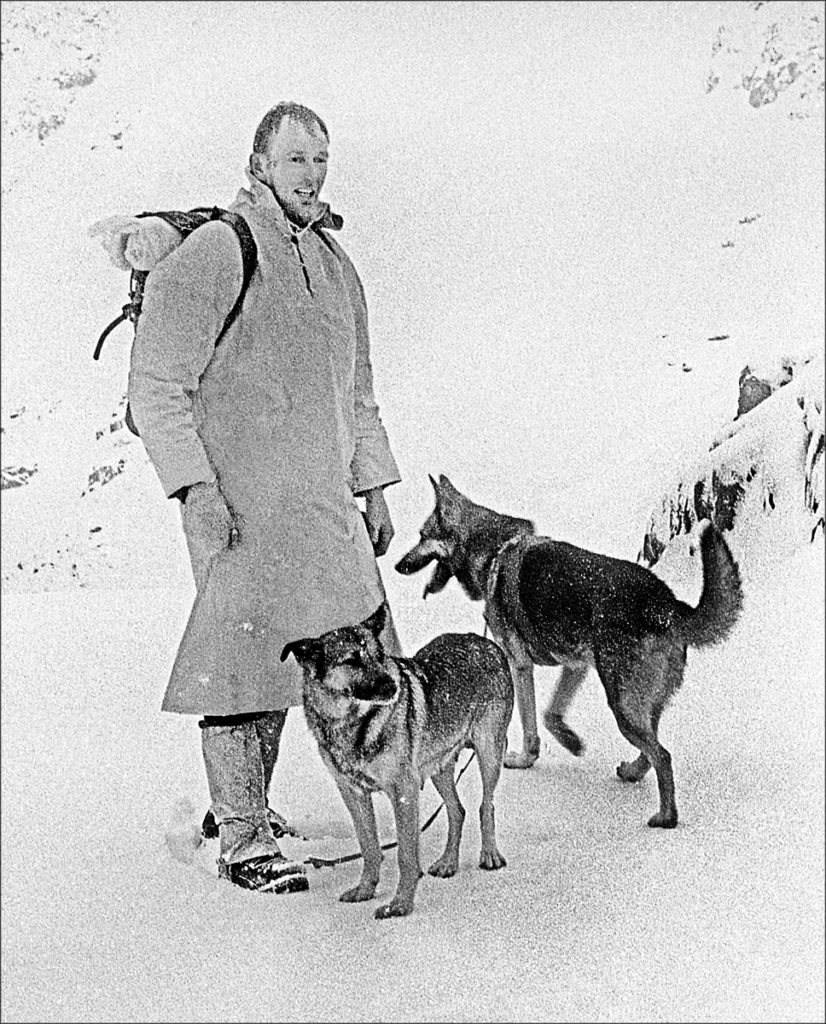 When one thinks about search and rescue dogs, perhaps the image of a large St. Bernard dog trotting in the snow and carrying a whisky cask comes to mind. I am alway reminded of a hilarious scene in the film Swiss Miss (1938), by Laurel & Hardy, where Stan covers himself white hen feathers, pretending to be buried in snow, in an attempt to convince a St. Bernard dog to “rescue him” and let him drink from its whisky barrel.

Whilst it is true that one of the first known deployments of dogs in rescues was documented at a monastery on the Great St. Bernard Pass in Switzerland’s Alps – where dogs of a breed carrying the same name accompanied monks in such expeditions – this has little to do with today’s dog search and rescue.


The origins of SARDA

Before SARDA was established in 1965, dogs had already occasionally been used for rescue purposes in the UK. However no specific training methods nor grades had been established and this was still only an occasional activity dogs were deployed for – mainly sheperd’s dogs. John Cleare, a photographer and mountaineer, also recalls that at Dartmoor, the RAF was already using an Alsatian dog for rescues. They placed red and green lights on him, to distinguish his front and back when sending him out to search for missing people.

The first seeds of the idea of training dogs for search and rescue were sown in Hamish’s mind during his military service. Hamish had spent part of his time in the Army in the Austrian Alps, where he became good friends with a mountain guide, Hans Spielman. Hans had a dog called Heidi, trained to track down avalance victims and Hamish had seen the value of dogs in search and rescue.

When Hamish left the army and returned to the UK, he decided to try and train his dogs, Tiki (a crossbreed) and Rangi (a pure German Shepherd) to be avalanche dogs. Later in 1963 the head of the Scottish Red Cross paid Hamish a visit: he was interested in his commitment to rescue dog training and asked him to test and score his dogs’ abilities. Following their encounter, Hamish received a letter from the Scottish Red Cross, informing him that he had been sponspored to attend an avalanche dog training course in Davos, Switzerland. He could not bring his dogs, but this experience was fundamental for him.

Kenny MacKenzie remembers, “After returning [from the course,] Hamish spoke to others in the Glencoe mountain rescue team about the use of dogs as an extra tool in mountain rescue. Shepherds in the team had collies while others, such as myself, had family pets which were trainable. Hamish explained how on the Continent dogs – mainly German Shepherds – were trained in avalanche rescue. Avalanche rescues were not that common in Scotland at the time, our main problem was wilderness searches. However it was evident that dogs could be trained for both types of search.” 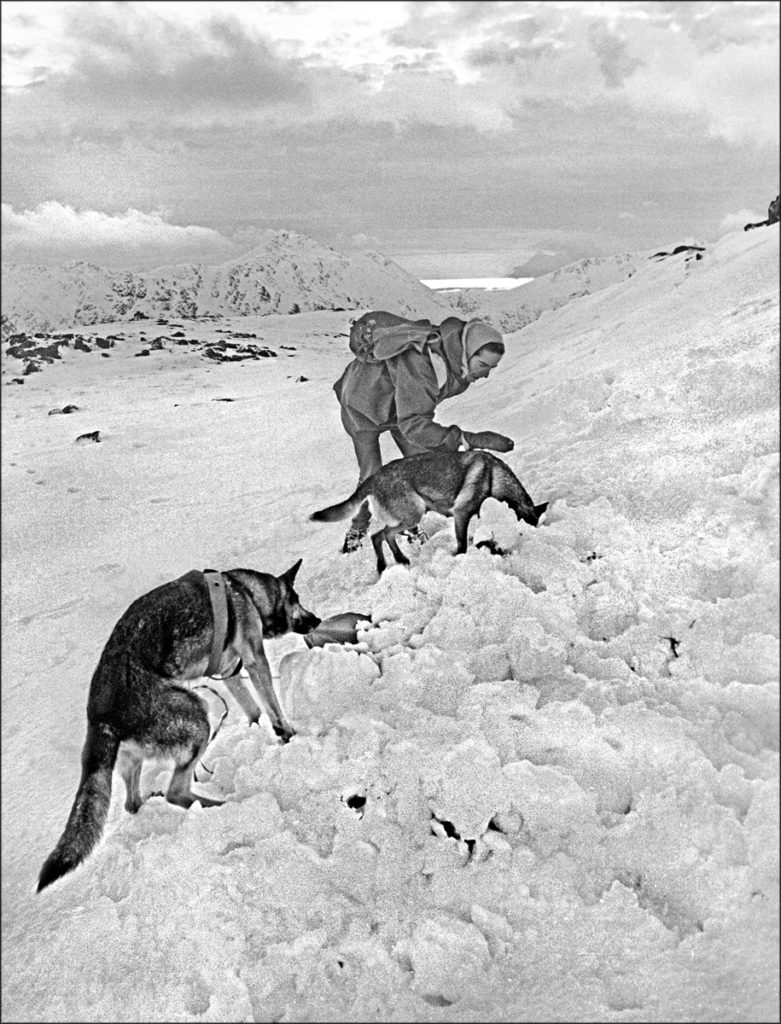 In 1964 Hamish, together with Kenny and others, organised a training course in Glencoe. “The course was very successful and lead us to form an association to train dogs for this work. The intention was for it to be nation-wide and invitations were sent to all UK mountain rescue teams. The response was fantastic and about 30 handlers and dogs from all over the UK attended a week-long course in Glencoe”, remembers Kenny.

SARDA, the Search And Rescue Dog Association, was officially founded in May 1965, by Hamish, his wife-at-the-time Catherine, Kenny MacKenzie, Willie Elliot (a shepherd from Glencoe) and Hughean Findlay, as confirmed by Kenny.

Kenny commented, “Hamish was always progressive and inventive, particularly in the mountain rescue field, and I often thought he was well ahead of his time”.

In the beginning, the key issue was securing the necessary funds to cover the expense of training, equipment and calls-out. “Our handlers and dogs had to travel considerable distances in their  own vehicles without payment when called to rescues. Gradually over the years local police forces reimbursed the handlers for petrol used. It was inevitable that police dogs would become involved too and in Northern Constabulary area all police dogs attended mountain rescue training”, said Kenny.

Hamish remembers that before the association came to life,  they had formed a committee to fundraise, and some very important people became patrons of the cause. Kenny added, “Throughout the life of the association we were always on the look out for funds. Luckily, in Scotland, we have a strong sense of being “thy brother’s keeper” and so we always had support from the public”.

The first course after the foundation of SARDA was held 21-24 December 1965 in Glencoe. John Cleare, professional photographer and expert mountaineer, attended the course and took many pictures. His wife-at-the-time was involved in a mock-search: she was buried under the snow and half an hour later searchers tried to find her. John remembers that rescue dogs went straight to her. In a later occasion, John had the chance to be buried himself, and took some interesting photos from a victim’s point of view (one of which you can see further below). 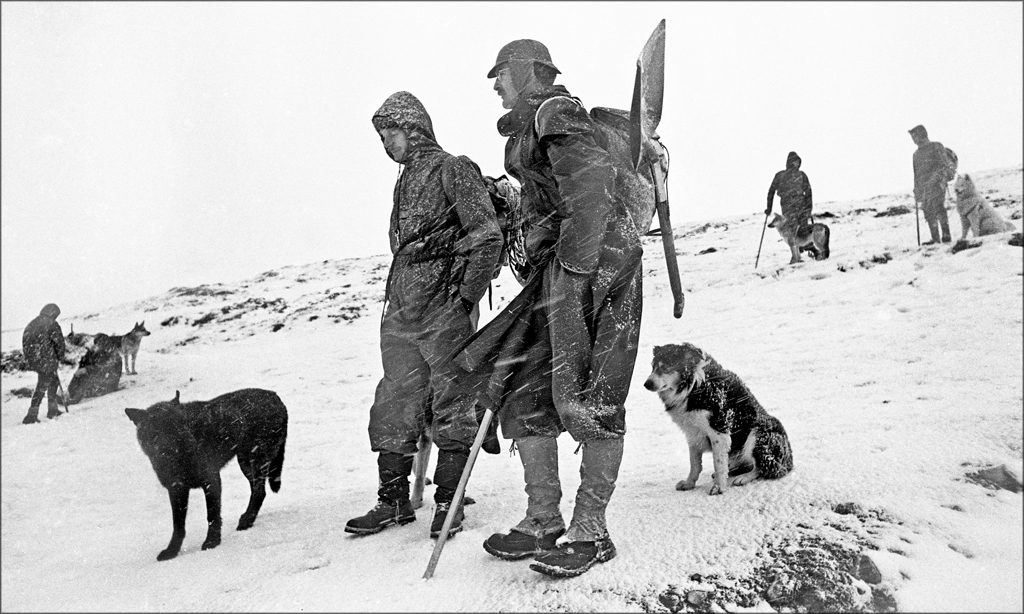 With regard to dog training for search and rescue, Hamish recalled that, first, the dog handler would be buried in the snow while somebody else held his/her dog. Once released, the dog would initially show confusion and not understand were its master was. Having encouraged the dog to dig, once the “victim” was found, the dog would be rewarded, usually by playing with a ball. At a second stage, the master would control the dog and somebody else would be buried, thus progressing towards more challenging situations. In summer, training would be carried out by burying people under grass and debris.

Kenny added, “In the beginning handlers would be trained to “read” their dogs, observing their attitude and body language whilst searching. Once a dog had located a casualty the problem was giving an indication to the handler who might be a hundred yards away, out of sight, in dark or misty conditions. It was decided that on making a “find” the dogs should return to their  handlers and show their happiness and enjoyment of the “game” by barking and expressing their excitement”.

Hamish highlighted the large use of Border Collies as rescue dogs today, who have in some respects replaced the German Shepherds originally used. This is because collies are able to effectively perform searches much further away from their master and bark when the victim is found, while German Shepherds work best when close to their handler. Thus the use of Border Collies has saved time and required less walking from the handler.

Rescue dogs are selected also for their fine noses, and they work on air scent traces as opposed to ground scent ones. These dogs must be healthy and very obedient, and have very different character traits compared to dogs used for other purposes, such as guide dogs for the blind. 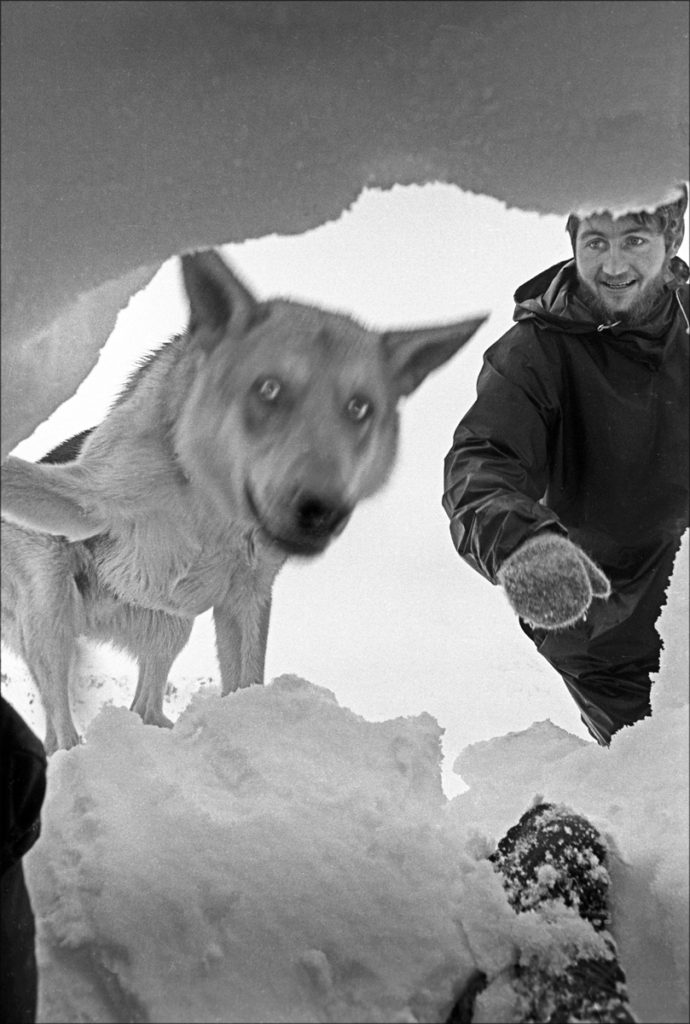 Rescue dogs as a resource

The utility of rescue dogs is widely documented. One particular episode from the early days of SARDA, is narrated in Hamish’s book Sweep Search (Hodder and Stoughton, 1986, 32-37). On that particular occasion, his dog Tiki was able to locate the body of a missing mountaineer that people had failed to find hidden in plain sight.

Tiki and Rangi accompanied Hamish in many other calls-out. Hamish remembers especially that Tiki was a fast learner and had very remarkable skills, while Rangi was slower to learn and could never achieve the excellence Tiki had mastered.


Unfortunately, Rangi was later buried in an avalanche and, having broken his back, had to be put to sleep, while Tiki grew old, having participated in a number of searches.

Today search and rescue dogs are widely used, not only for avalanche and mountain searches, but also in finding missing persons in rural and urban environments.

The evolution of Dog Search and Rescue

“Much has changed since those early days and even though the present rescue dog system does not mirror what Hamish envisaged they all pursue the same aim of bringing aid to those in need on our mountains. At present SARDAs in Scotland, England, Wales, Northern Ireland and Isle of Man are fulfilling Hamish’s vision for a nation wide chain of rescue dogs”, said Kenny.

You can learn more about about Hamish MacInnes’s story and activities on his official website and read about SARDA’s history and the current training of rescue dogs in Bob Sharp and Bill Jennison, Search and Rescue Dogs, Hayloft Publishing, 2012 (available on Amazon at this link, or buy it from the Mountain Rescue England & Wales‘s website to support them).

This blog post is the result of chats with Hamish MacInnes, Kenny MacKenzie and John Cleare. A special thanks goes to them for their kind availability to speak with me and their assistance in providing useful materials for this blog post. The pictures featured are from John Cleare’s Mountain Picture Camera Library. On a separate side, a special thanks also goes to Grace, for her proofreading.