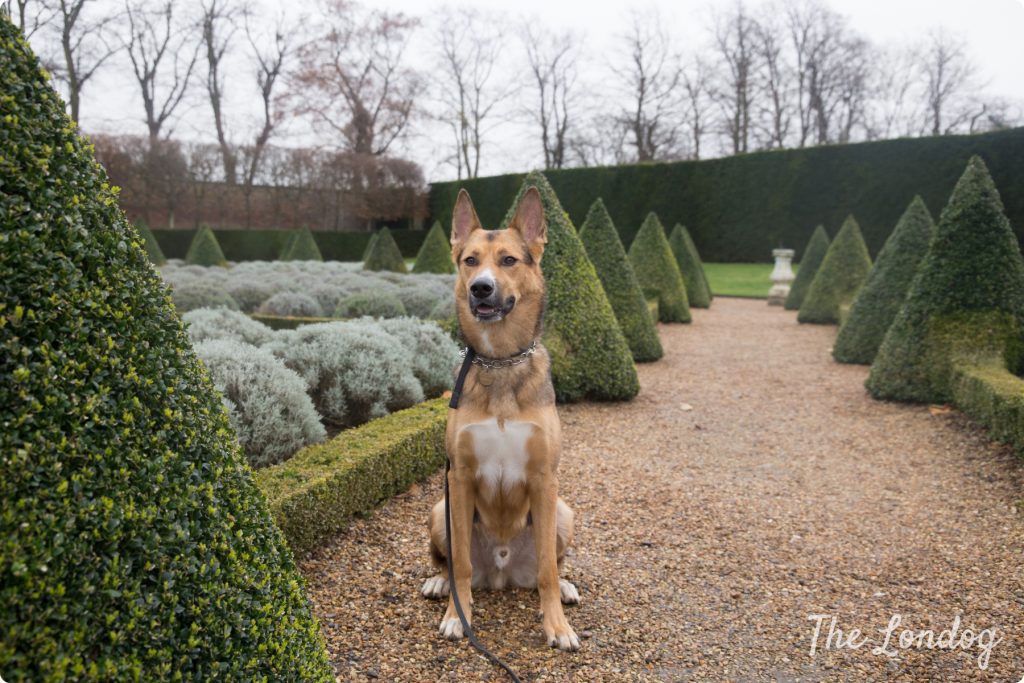 On 26th December and until 9th February 2018, Ham House and Garden opened its doors to well-behaved dogs for their “Twelve Dogs of Christmas winter walkies” dog-friendly trial. As anticipated in our previous post (Dog-Friendly London | 3 Festive Things to Do with your Dog this December), we visited Ham House for a dog-friendly preview tour, so here is what to expect and why you should pencil this in on your calendar! UPDATE: after their trial, at the start of 2019 Ham House and Garden has become dog-friendly all year-round. 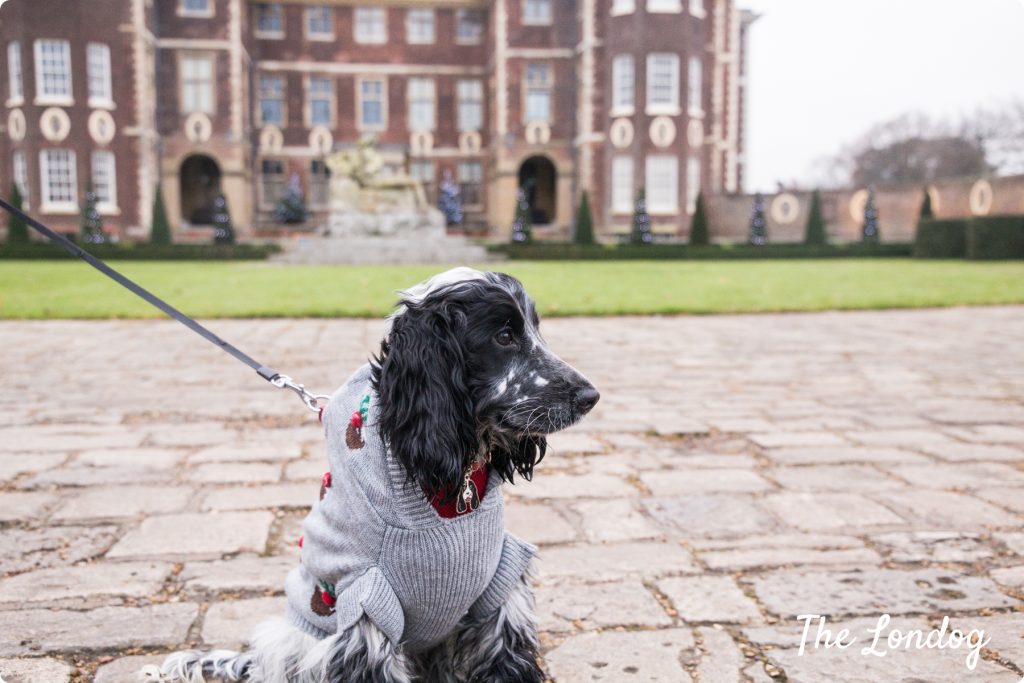 Willow, the Spaniel pup, in her Christmas attire

The pictoresque Ham House and Garden are located in Richmond, just off the Thames. Built in 1610, this is one of the historical Stuart houses and a very beautiful place where to spend a few hours.

The House is said to be haunted by ghosts and it is known for being not just one of the many haunted houses in Britain, but THE most haunted. They even organise proper ghost hunts in Autumn!

According to what reported by the National Trust, sinister events that led to believe in such a massive ghosts’ presence include cold spots, inesplicable scent of roses, the sighting of a mysterious woman in black and a particularly sinister and oppressive room on the ground floor, where “pets are unwilling to enter” and people are scared to look through a large looking glass. It was concluded that there may be as many as 15 ghosts in the House, and some of them are said to be ghost dogs too! 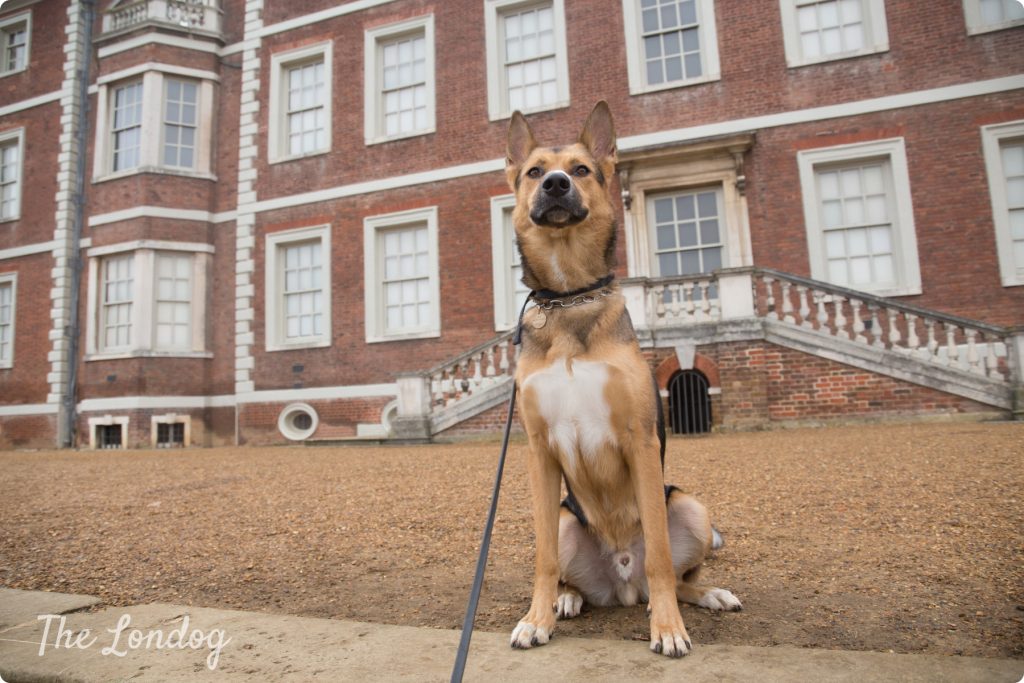 We visited Ham Garden on a gloomy morning. We found Willow the Cocker Spaniel pup in her best Christmas attire and Dillis the Black Labrador – both owned by Ham House’s team members –  waiting for us, and we were joined by a number of other cheerful four-legged for a dog-friendly preview tour of the property. Definitely a good and warm company!

Ham House and Garden’s staff seem to have thought about everything: they explained that for the trial they will provide water bowls for the dogs and showed where ad hoc dog waste bins would be placed along the paths. In addition, for the first 12 days of dog-friendly opening, Ham House’s team will even be giving out bones to furry visitors. 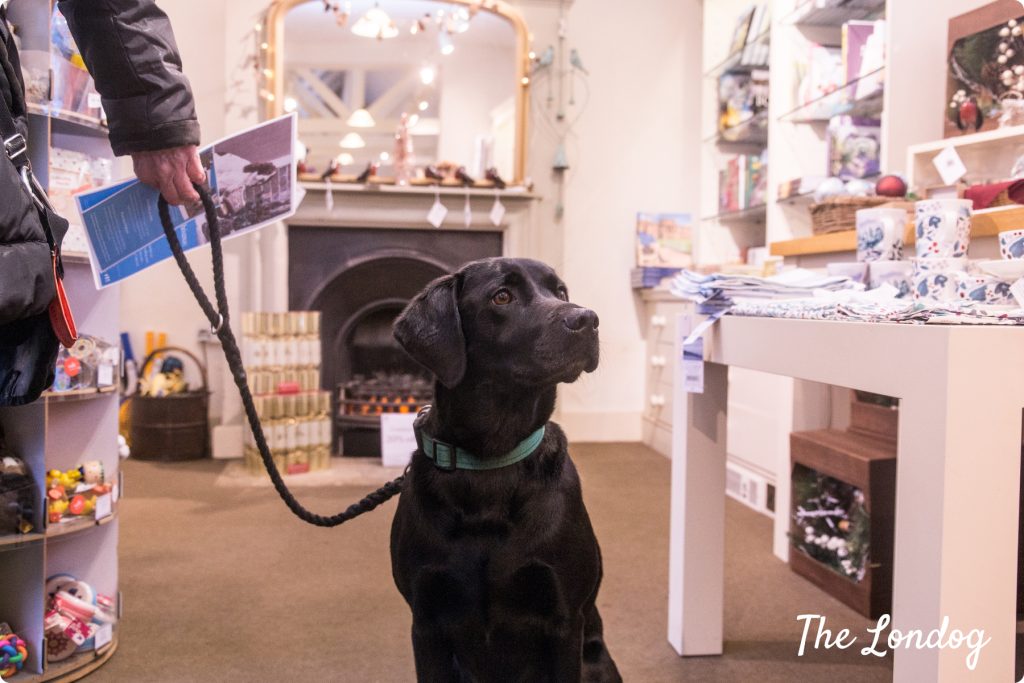 Dillis the Black Lab at the shop

During our visit, we had a very nice guided walk around the property on the gravel paths (great also on a damp day) before heading to the shop and the orangerie. In fact, although dogs are not allowed in the house, they can enter Ham House’s shop, which is located in a 17th century lovely outbuilding, and the orangerie cafe’, where you can enjoy a hot chocolate and a slice of cake and ever warm up by the fireplace… which is just fantastic, especially on a chilly day! 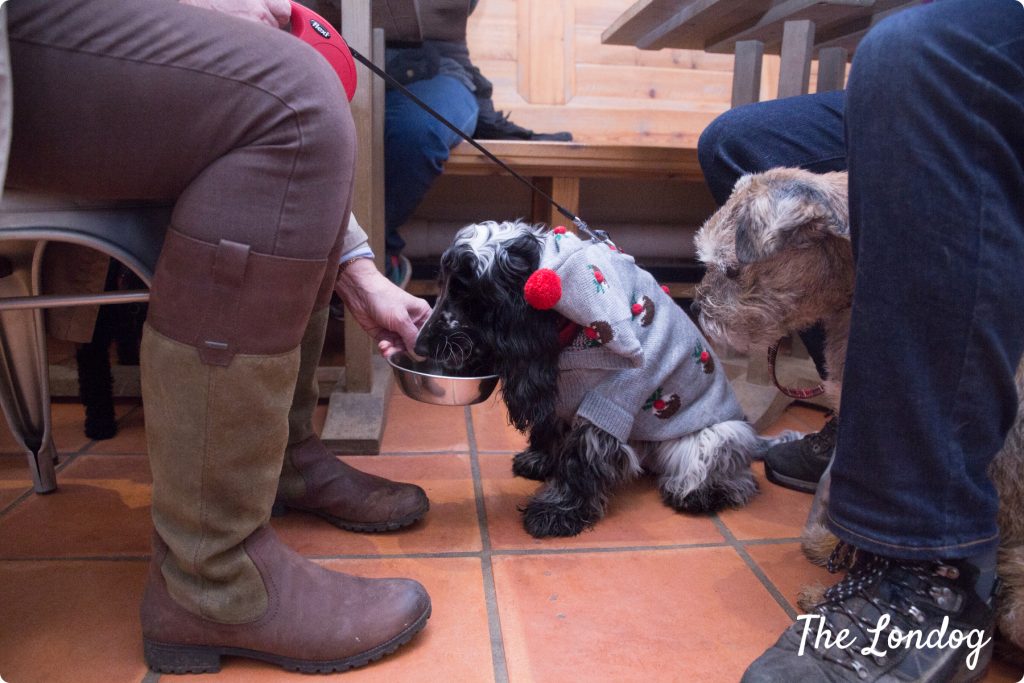 Willow having a drink at the orangerie cafe 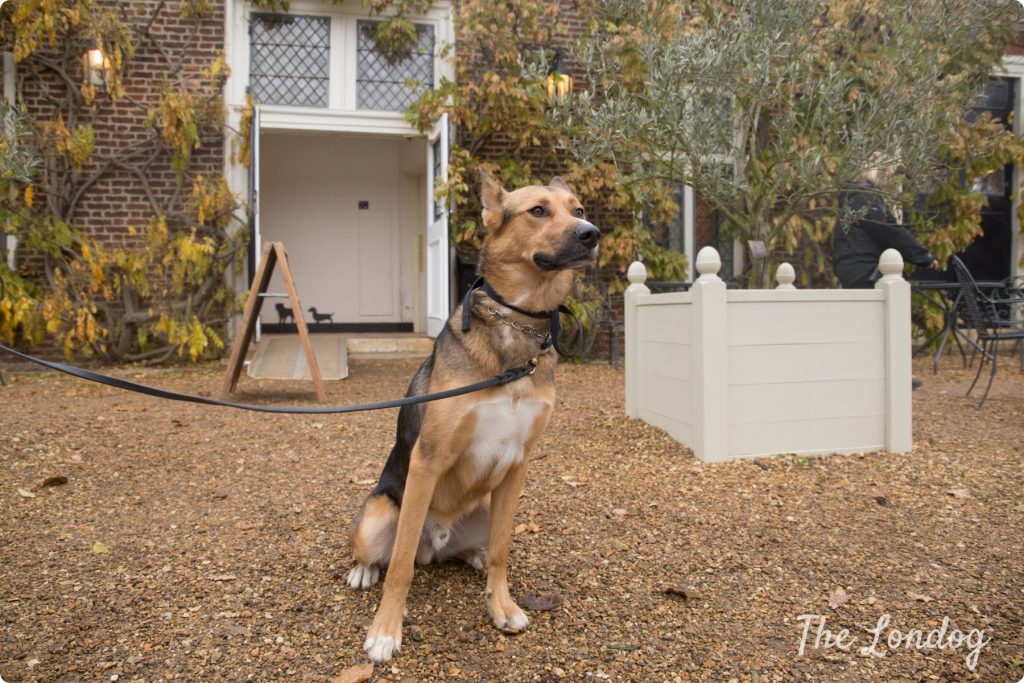 We found the dog-friendly walk at Ham Garden very enjoyable and would definitely recommend it! A lovely idea for a different outing during the holidays. There are also 3 more good reasons to visit Ham House and Garden with your dog during their Twelve Dogs of Christmas Winter Walkies trial…

3 reasons to visit Ham House and Garden with your dog

1. Meeting a ghost dog. If your furry friend is the adventurous type, ghost dogs can be a good motivation to visit Ham House and Garden. Dogs aren’t allowed inside the house you are right, but it makes sense that ghost dogs must be roaming around the property too…

2. For the treats. The name ‘Ham’ will probably already be of inspiration for more than a pooch. Add that every visiting dog in the first 12 days will receive a bone and the first one through the doors a special treat, and you’ll get all paws in for the experience.

3. Because it is a unique experience. Ham House and Garden is described as “a rare 17th century survival of luxury and grandeur” and, indeed, it is truly majestic. Considering that it is still unknown whether it will open its doors again to the four-legged after the trial ends, having the chance to visit it with your dog during the trial is basically a privilege… so don’t miss this great opportunity! 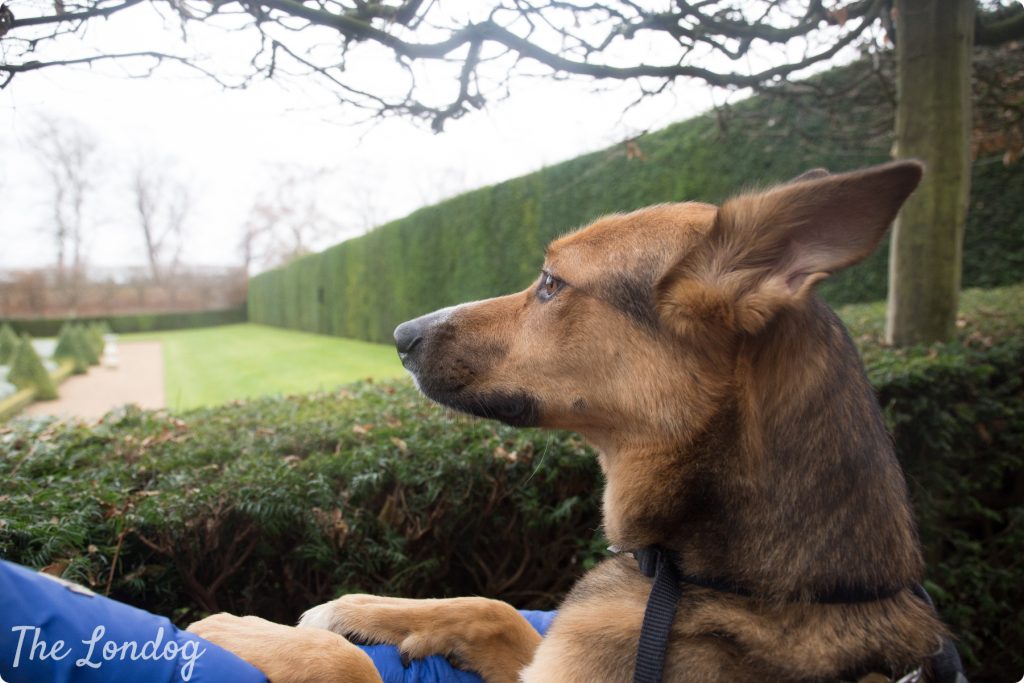 During our preview tour, Ham House and Garden’s team asked for  feedback. We already suggested to organise some fun dog event at Ham House and Garden, which could be a great fun for Richmond dogs and not only them! Also… writing this post we were thinking how fun it would be if they included some canine ghost hunts, with scent challenges and clues for dogs to solve a ghost mystery!

The National Trust’s team managing Ham House and Garden is eager to hear about visitors’ feedback, so make sure you have your say to help them offer the best ever experience.


How to get there (without a car):

FAQs:
Do I need to book? No.
Are there any dog rules? Yes: dogs must be kept on a lead (the leaflet reads “all dogs please keep your owners on short leads and vice versa”); owners are asked to pick after their dogs (bins provided and in case of necessity bags can be asked at reception) and respect the off-limits areas, keeping on the paths for how much possible.

How the trial goes will determine whether Ham House and Garden will open to dogs again in the future. 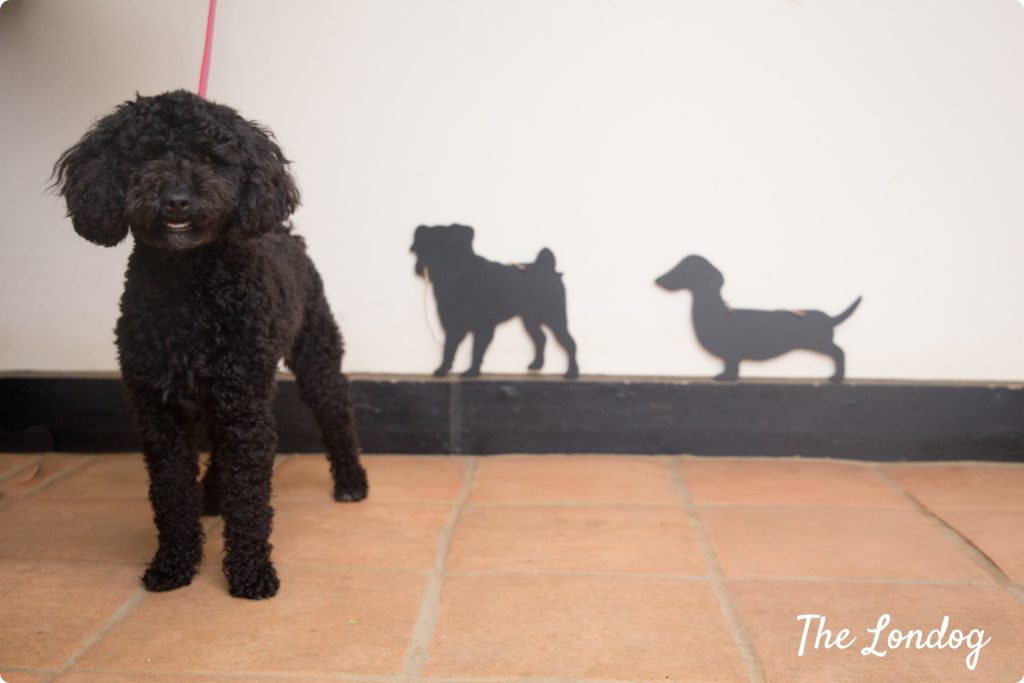