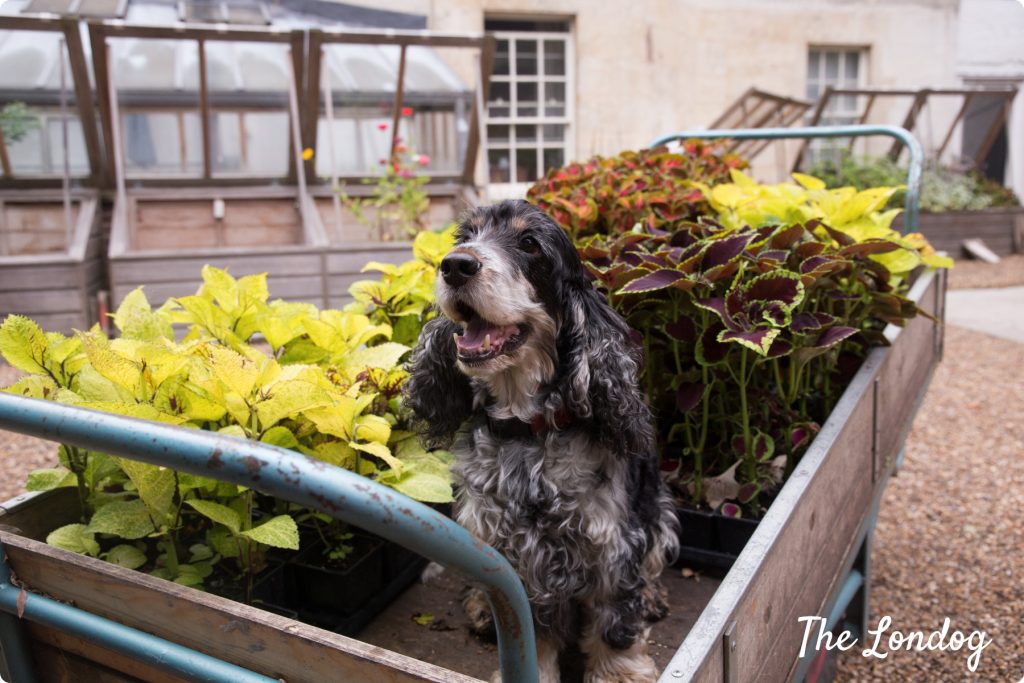 Most of us, when thinking about work, will picture a desk, a computer and probably little time outdoors. In a nutshell, something quite different from life as a gardener at Inner Temple Garden. And definitely something VERY different to the life of full-time Chief Pigeon Chaser Boris, the charming ten-year old tri-coloured resident Cocker Spaniel. Boris opens the sixth edition of the Office Dog Series. 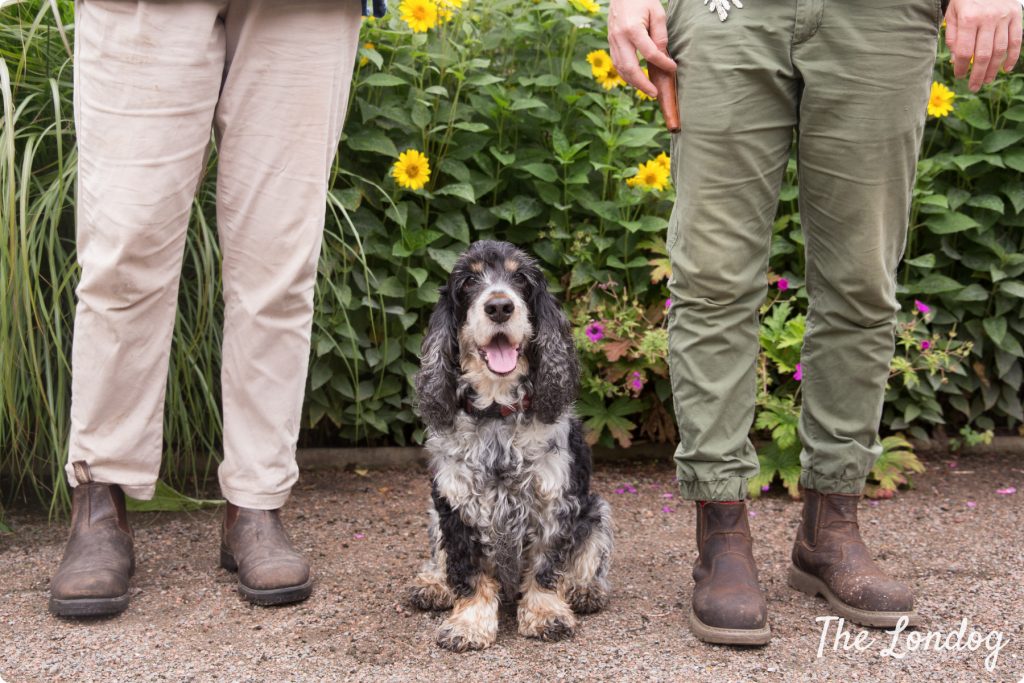 Despite his not-so-young age, Boris is a very active and resourceful lad. He always seems to be smiling and has a number of endearing nicknames including Moo Moo, Pooch, Boris Balls (at his country retreat), Borisey and Borisito. However, gardener Pamela noted “Boris is perhaps the most demanding member of the Garden’s team with his rather needy, obsessive and drama queen tendencies. Luckily, this is outweighed by his loveable, geeky and funny nature”.

When I visited the Garden, on an early overcast morning, I had the chance to join Boris and Andrea, the Head Gardener, on their morning patrol, when they check what needs to be done in the Garden over the day (and make sure that Boris poos where he is noticed and can be cleaned after, lein order to lead the residents’ dogs visiting the Garden by example). This brief tour reminded me – not without a hint of nostalgia – of the time I used to spend gardening with my grandmother when I was a kid and made me appreciate even more how lucky Boris is to enjoy his daily job as Chief Pigeon Chaser. 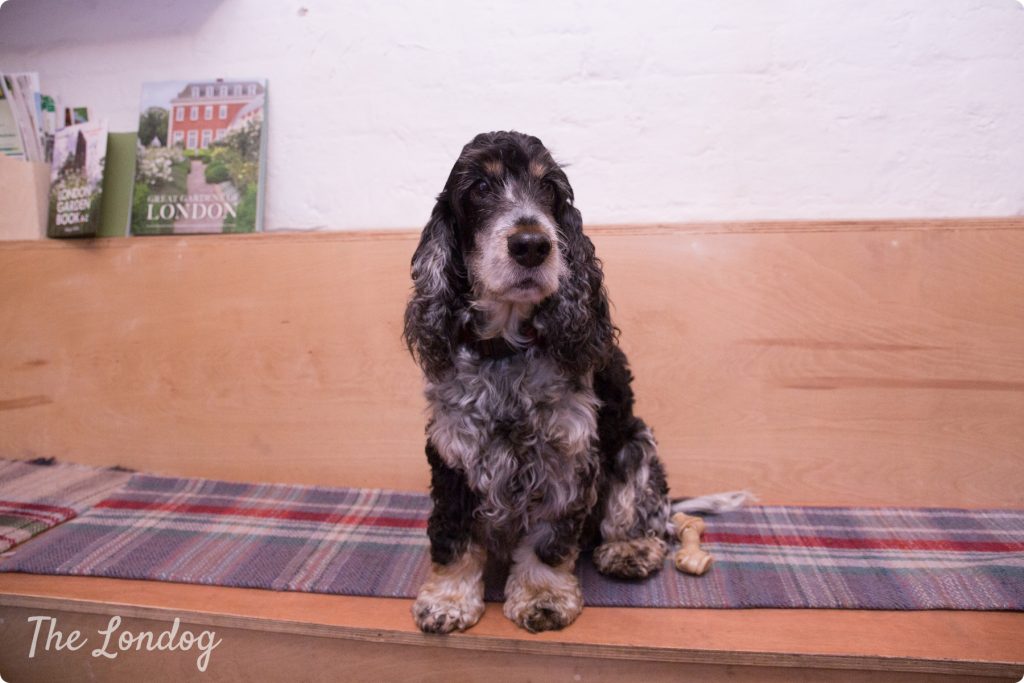 Andrea recounted that she got Boris with her first wage, when she started working for the Inner Temple Garden, and he has been going to the Garden with her ever since. It is interesting that Andrea does not define him as her dog, nor herself as his owner. Instead, she says that Boris is the “Garden’s dog” and she is just the person who brings him home with her at night.

Boris is also known for… 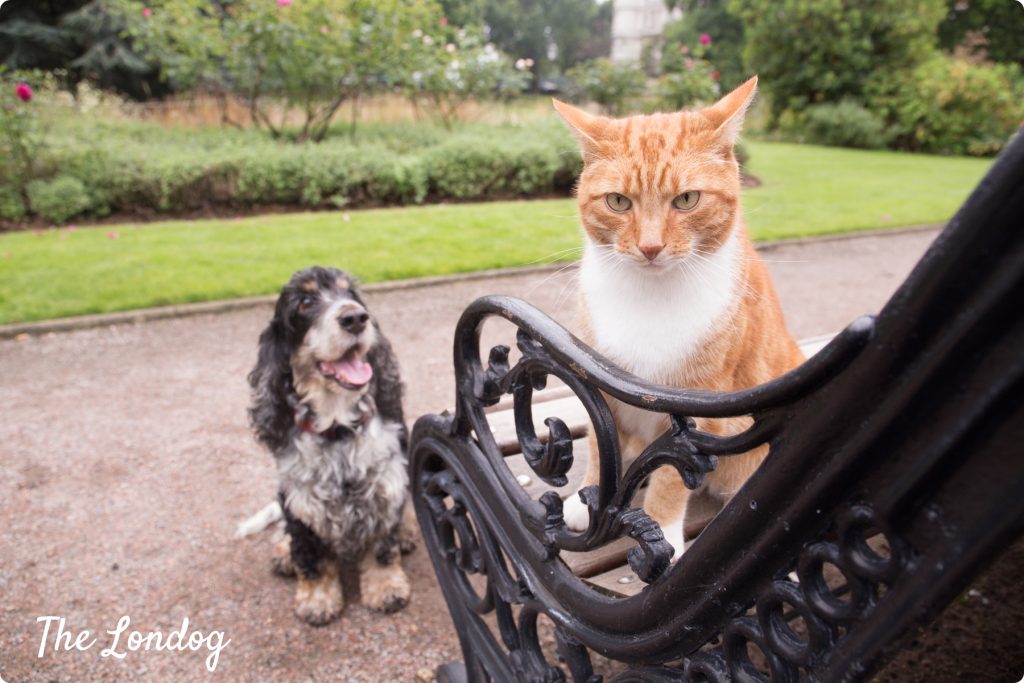 Pamela explained that Andrea had named him after Boris Spassky, the Russian chess grandmaster, “in the hope the pup would live up to his intellect. Despite his egg-shaped head his IQ does not match his name sake, but he certainly makes up for his shortcomings with his high EQ – and as a companion in the Garden that’s what we need most!”

Boris is probably second in the line of command, with Hunter, the Garden’s white and ginger cat, ruling as master. Their relationship is not like that of cats and dogs, but they do not let themselves be particularly mawkish either and maintain a certain detachment from each other. “Boris and Hunter co-exists, I am not sure if they love each other. Boris will defend his own food from Hunter, but will protect Hunter if another dog shows interested in chasing him”, said Andrea. I had long dreamt of sneaking an “office cat” into the Office Dog Series, so it was a lovely surprise to find that Hunter had cleared his mice hunting schedule to join the photoshoot. 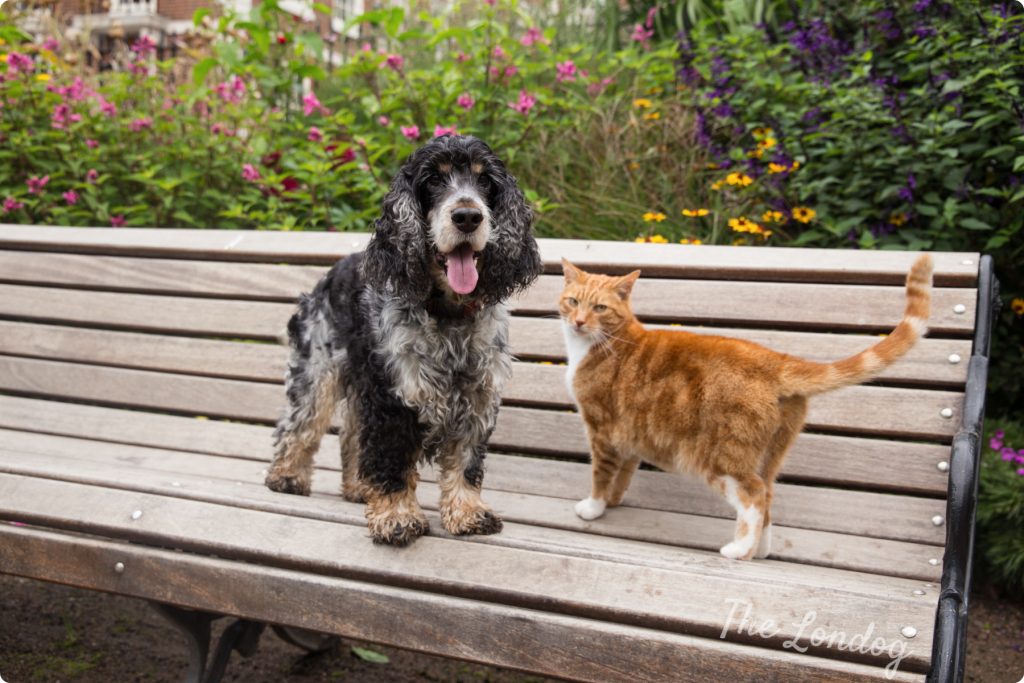 Hunter arrived as a kitten from a household in Bermondsey to be Chief-Mouser in the nursery and Garden. “Hunter has a very reserved character, compared to the lively Cocker Spaniel Boris” said Andrea. “Nevertheless, he is a very friendly and a well-mannered cat. Hunter is known for getting into trouble. He gets locked in the storage cupboards around the estate, ends up sleeping under parked cars, gets into fights with foxes and once nearly lost his life – but hasn’t learned from that to stop having stand-offs with foxes and to simply leave that job to Boris.” 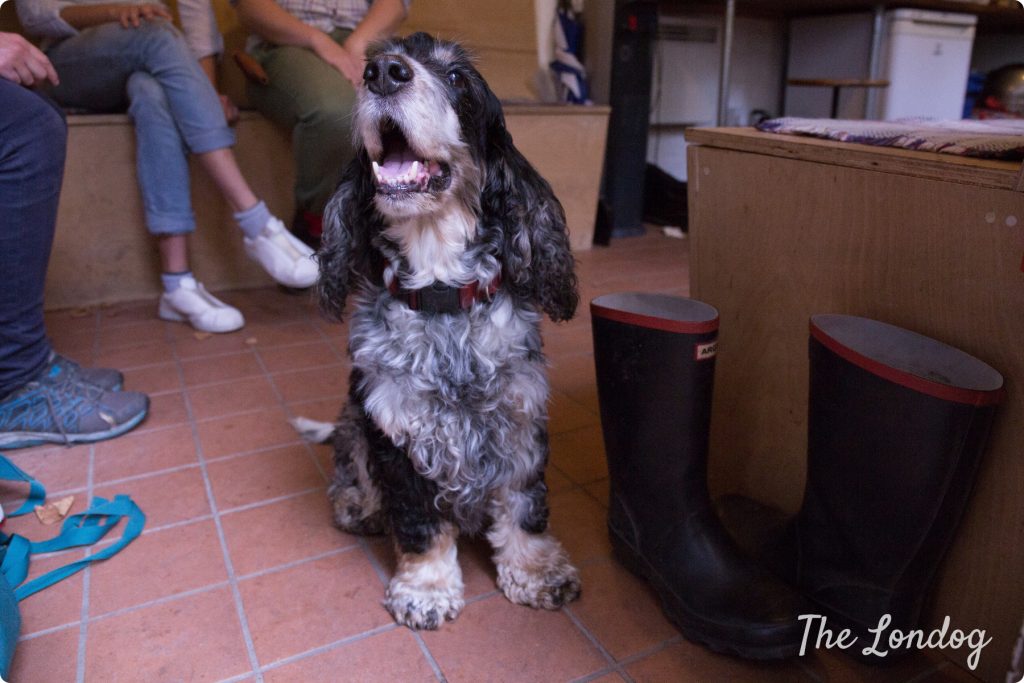 When Boris is at work, his main activities are sleeping, patrolling, scavenging and snuggling. One of the advantages of being the Garden’s dog is also being able to enjoy push-cart rides or jumping into a heap of Autumn leaves that are about to be collected. In addition, Boris takes care of PR and public engagement, well-being and occasionally poses as an Instagram model.

Some time ago, Boris got involved in a little drama at the Garden, when he disappeared for five hours causing much apprehension. Pamela recounted, “[We started wondering] had he escaped onto the embankment to follow a pretty bitch? Had someone stolen him? Had he run onto the road and been hit? In a state of panic we had all forces out looking for him… and it’s only then we realised how much of a fan club he had! The City Police (who regularly walk their Police Dogs in the Garden) had him on their radar, every vet in the City Mile was on the case and numerous barristers were tweeting #FindBoris. All the security from Middle and Inner Temple were on patrol whilst we traipsed the Embankment hoping not to find him lying limp on the road. Five hours and a lot of drama later… we finally found him in the Woodland Border, dead silent and unbelievably focused on a squirrel at the top of a tree. With much embarrassment we called off the search, but couldn’t quite admit how and where we had found him, and might have made up a more dramatic alternative to save our embarrassment!”

The perks of a Chief Pigeon Chaser 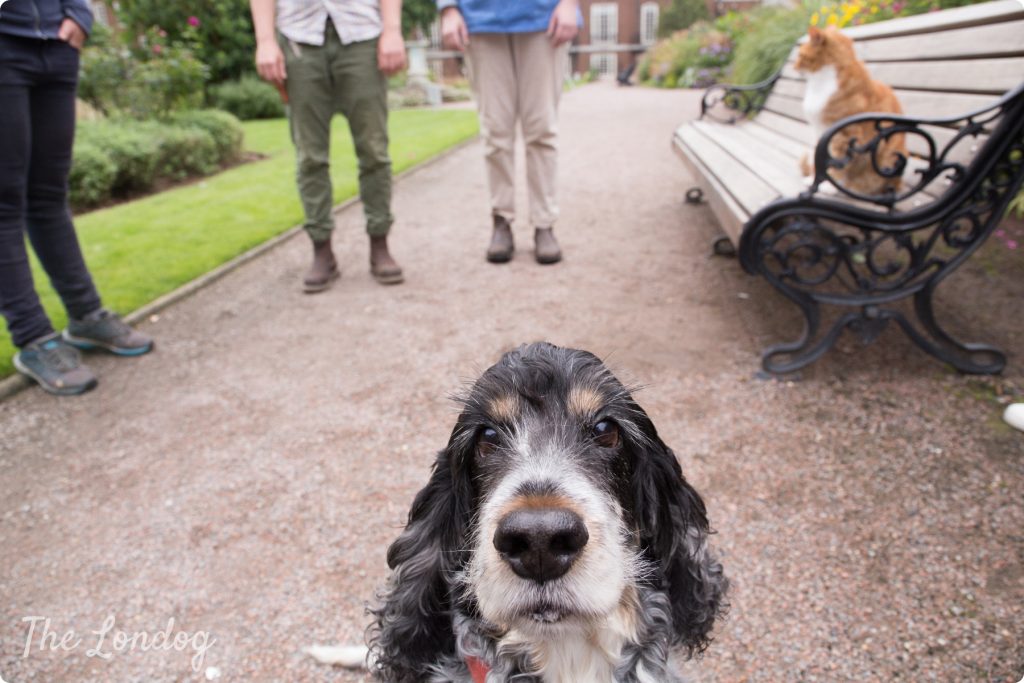 As if having a pigeon-free garden wasn’t enough, Boris seems to have a talent for taking selfies (see the above picture). The team also appreciates him for:

If you fancy meeting Boris (and Hunter), you can visit the Garden on weekdays from 12.30 to 3pm during its public opening hours.