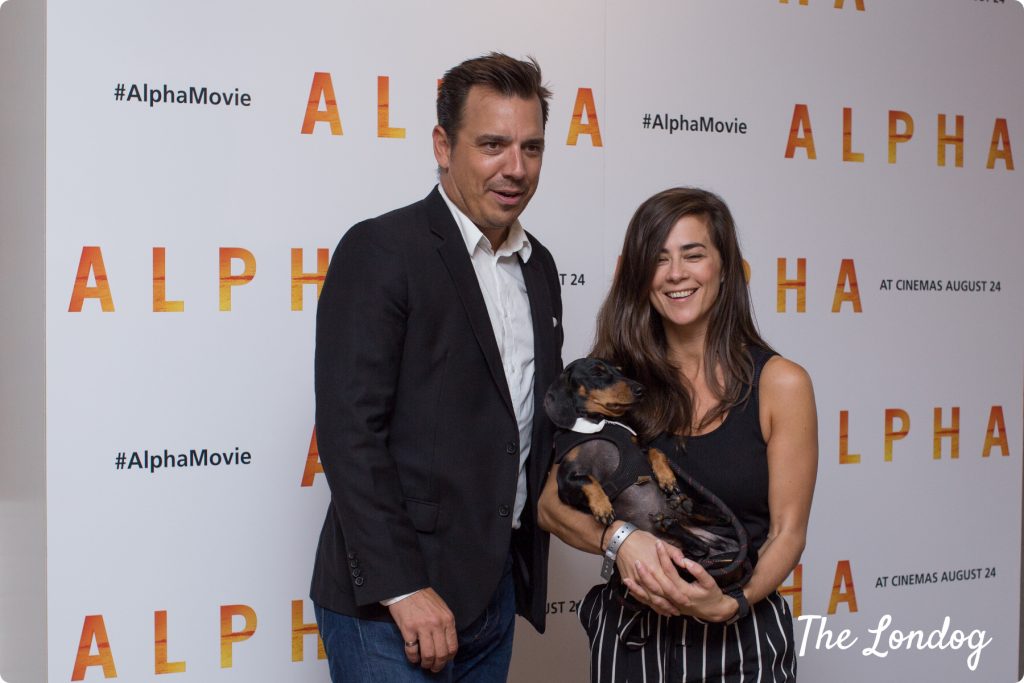 This weekend, we were invited to the gala dog-friendly cinema screening of “Alpha”, the new movie by Sony Pictures, which took place on Sunday 19 September at Picturehouse Central, in Piccadilly.

You may have seen the teaser of “Alpha”, which will be released in cinemas on 24th August. The story, set 20,000 years ago, is about the bond between mankind and man’s best friend. The plot sees Keda – the young son of a primitive tribe’s leader – and Alpha – the wolf -, losing their respective tribe and pack, and finding themselves together, relying on each other in the fight for survival.

From the trailer, I expected it to be a film for families and maybe a bit cheesy, but it was not. It had a very good balance between adventure, looming moments and some touching ones. “Alpha” does not tell a historic recreation of how man-dog kinship must have begun either; instead, it does something more interesting and original: telling a story with some modern elements, but thrown in the ancient past. 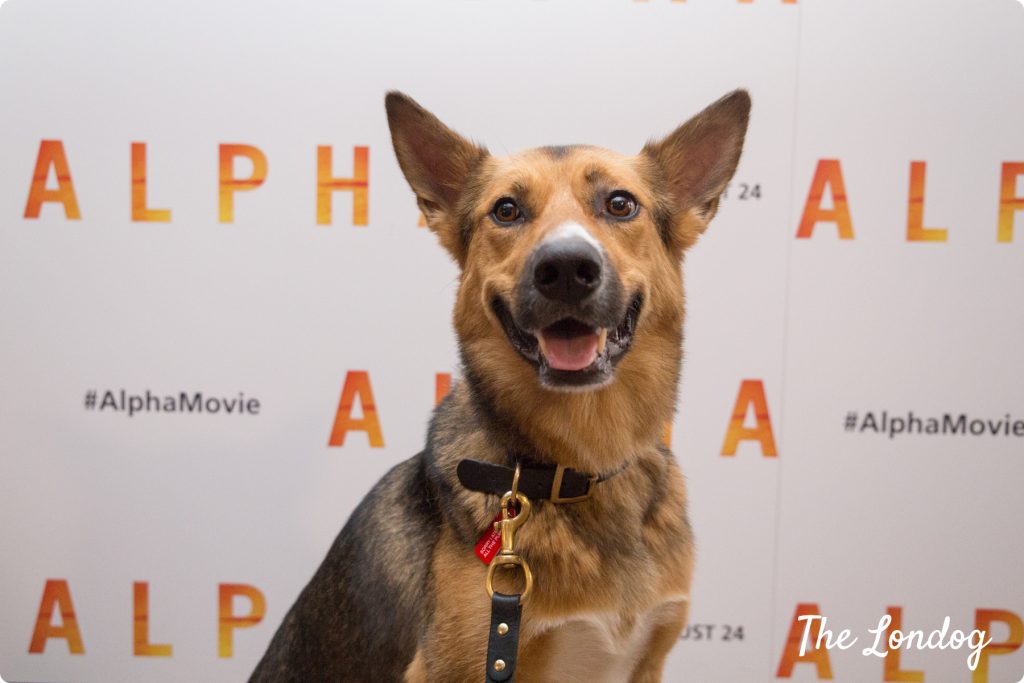 At the gala screening, there were a few celebrities (dance and skating champions, singers and models), including Alex Murphy, Katya Jones, Talia Dean, Jenni Falconer, and around 20 dogs, among which some rescue pooches from local charity All Dogs Matter, like Holly (in the photo below). 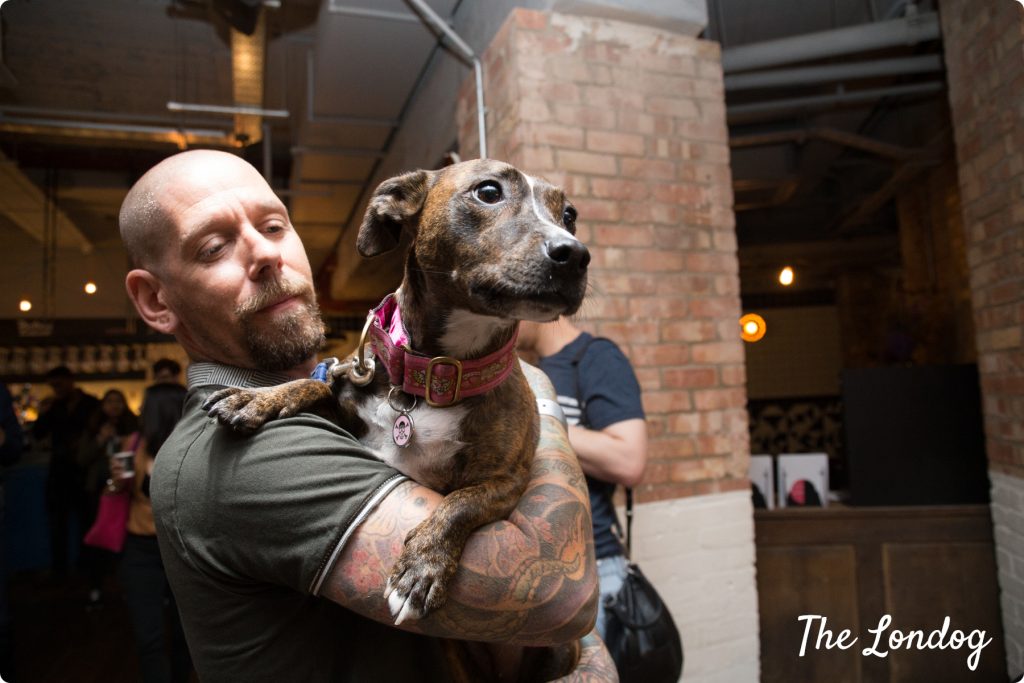 Concorde Media, which organised the event, had arranged a breakfast reception before the film and thought of every detail. From food for the humans to the treats for the dogs, facial painting, live drawing for the press tags and even a grooming station! There were dog water bowls with Alpha’s logo too. 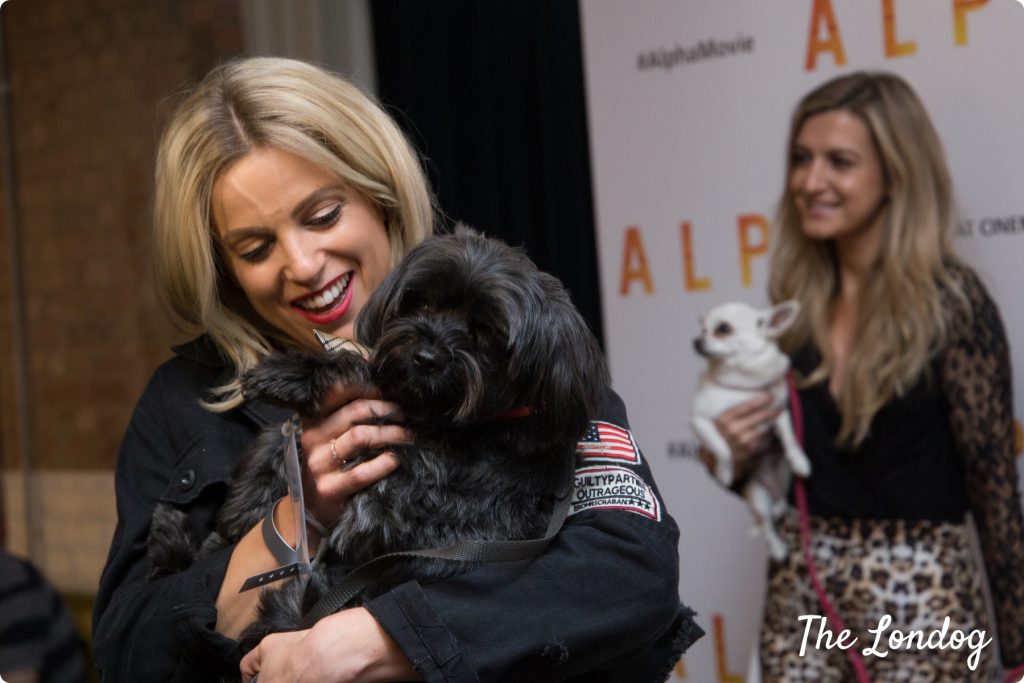 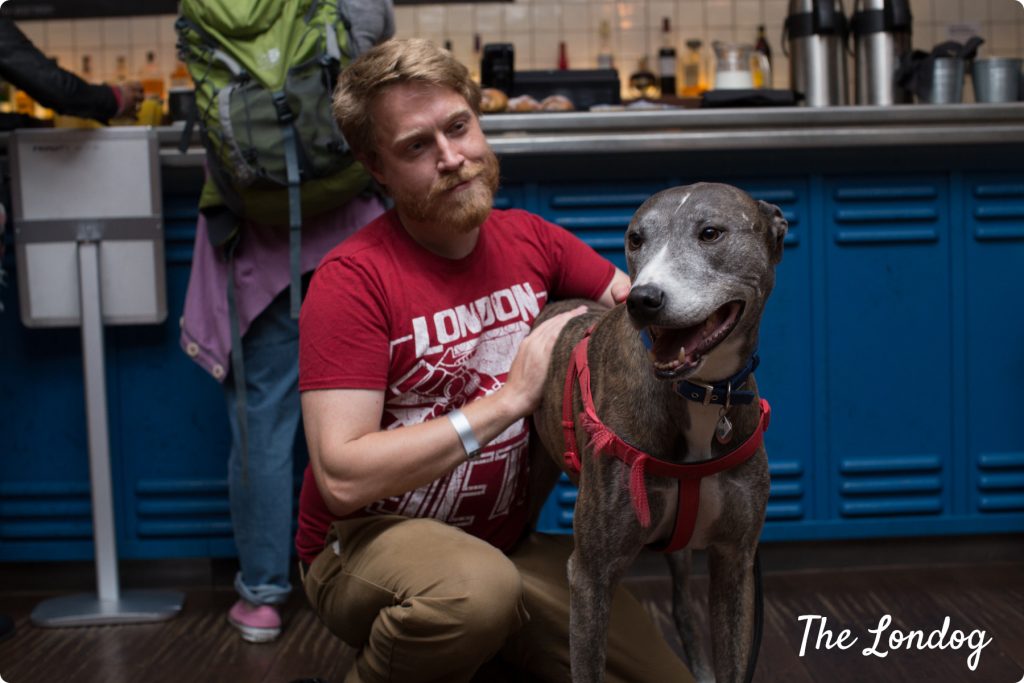 The pups could take advantage of them, and most dogs had their caricature made for their press tag. Later you could see them charging around or posing for pics, sporting their tag holder with their portrait. 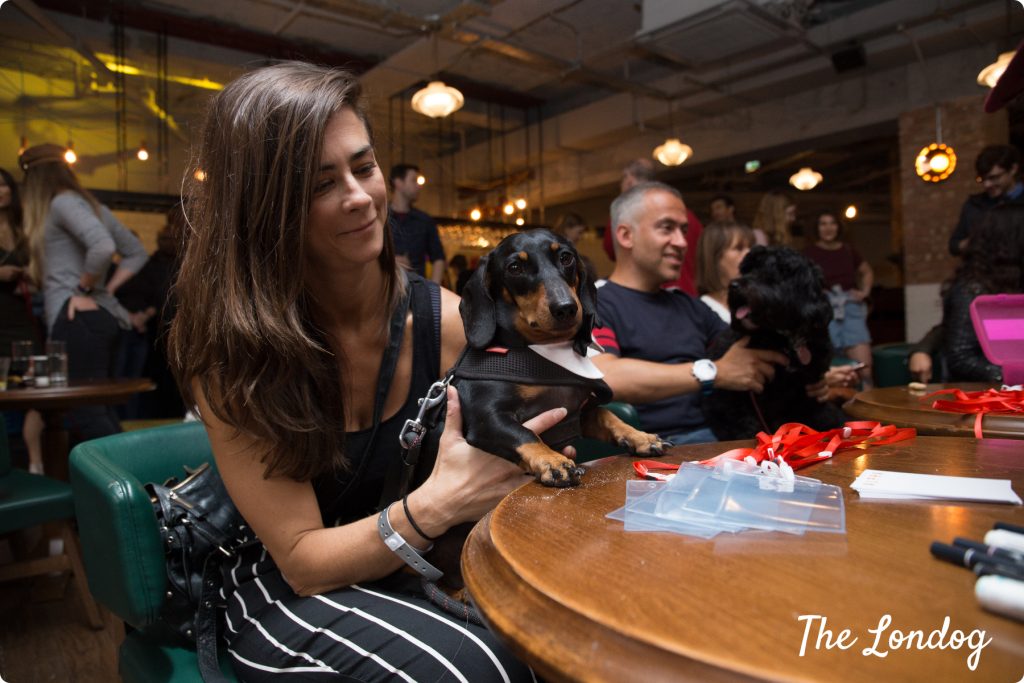 Walter sits for having his caricature made

Some of the dogs dressed up smartly, like dachshund Walter (in the photo above), who wore a dapper white shirt collar with bow tie, and Gustavito who had his best tie.

Argo didn’t have any bow tie, but he wore his new “Sorry I ate all pupcorn” red collar charm, which was a kind gift from our friends at Growlees, and a nice match with his blue leather collar and leash by Fetch & Follow. 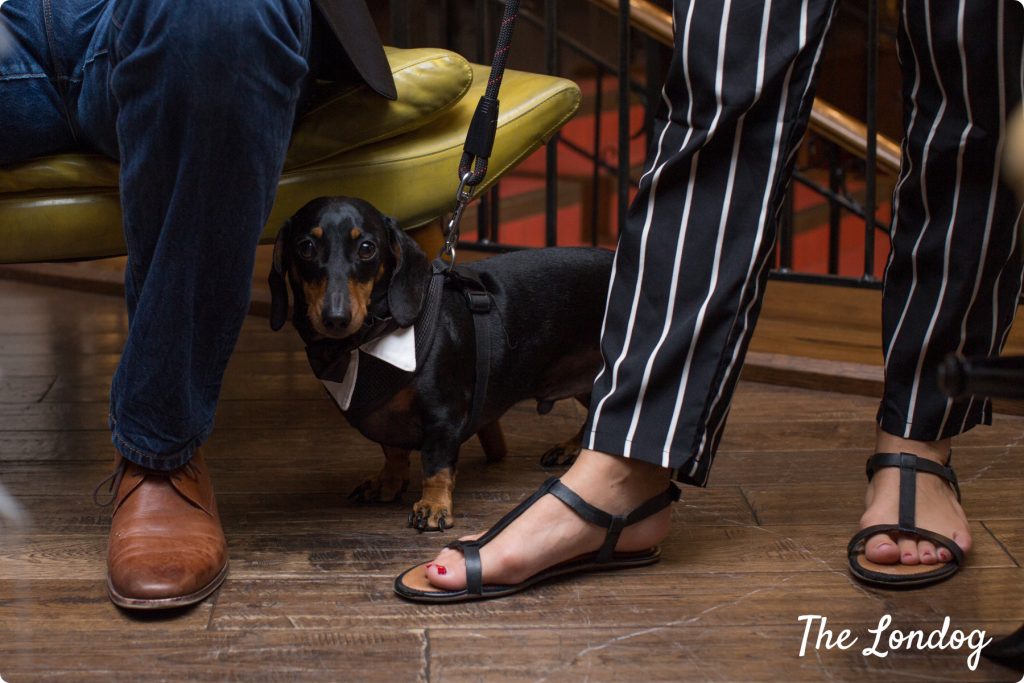 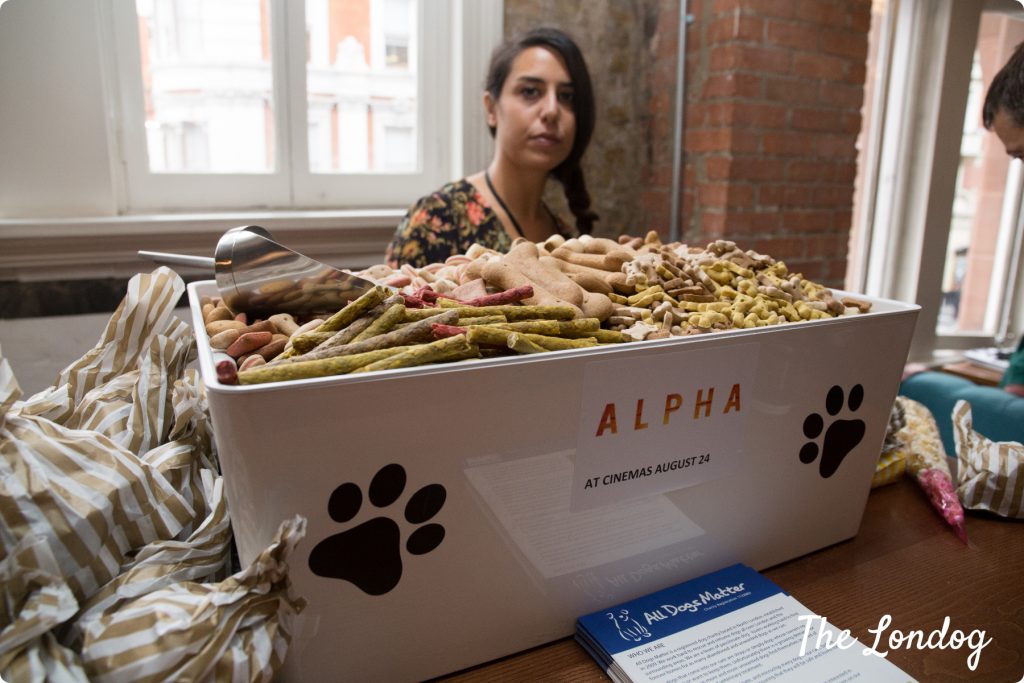 When we headed upstairs to Screen 2, there was just time to find a seat and the lights were already diming and the film ready to start.

Argo was very interested in watching the first few scenes of the movie, especially those of the bisons running wild. I wasn’t surprised, since at home, the rare times the TV is on and we watch an animal documentary, he will stare at the screen at lenght (monkeys are his favourite).

Singer Talia Dean, who was sitting behind us, approached us after the film to say that it was so funny to watch Argo watching the start of the film. While the photo she took unfortunately came out completely black, May – Miss Darcy and George’s mum, from Miss Darcy’s Adventures-, who sat just a couple of seats on the side in the row behind us, snapped the perfect one and was so kind to share it (below)! 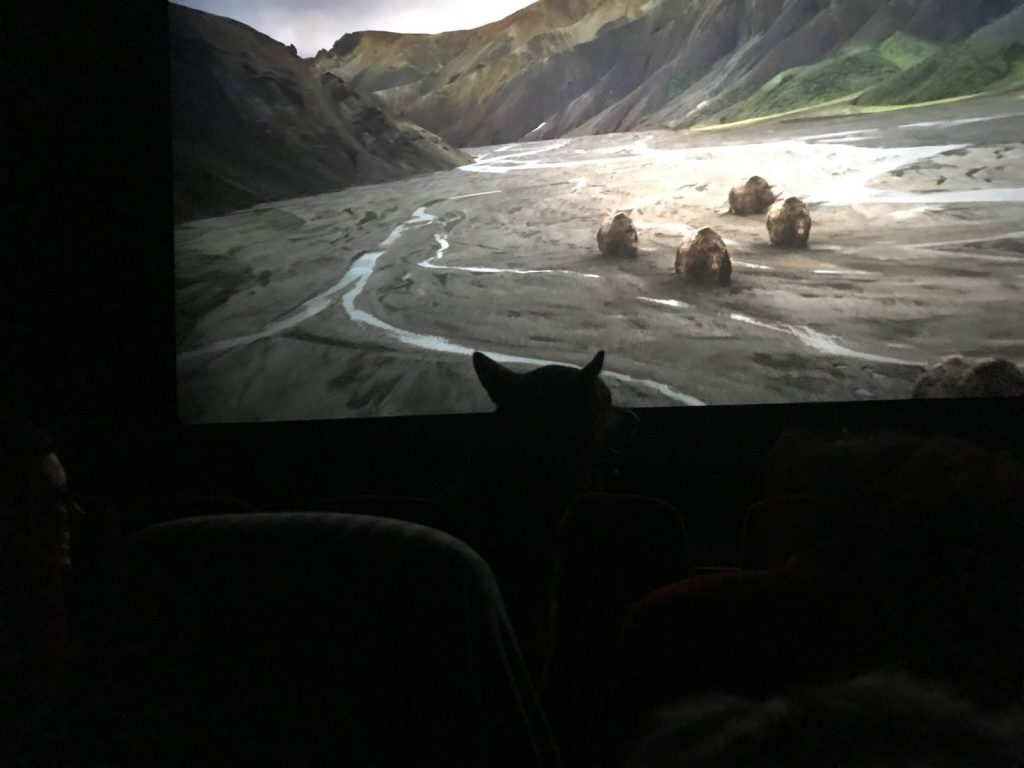 All dogs were very quiet during the whole movie and there was no bark until the very end of the film, when, from the back rows, a little concert started at the closing credits. We enjoyed the film and had a great time!

For the gala screening, we received some complimentary entries and ran a giveaway on our Facebook page for the chance to win a pair of tickets to the show. If you weren’t the lucky ones, stay in the loop for future chances.