We had heard of Furbo Dog Camera for a while and when they got in touch asking whether we would fancy to try it out and review it, I was very curious about it. This blog post is sponsored by Furbo (advertising), however it contains an honest and independent review of the product and all views are our own. 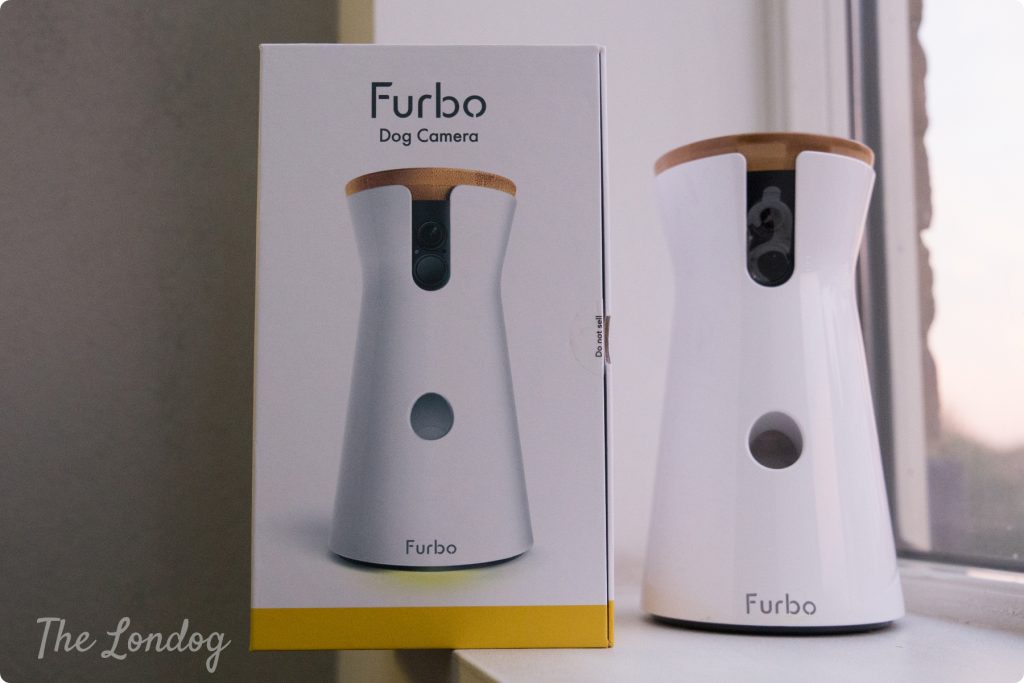 What is Furbo Dog Camera

Before diving into our first impressions about Furbo Dog Camera, it is good to tell you what is Furbo, in case you haven’t heard of it yet.

Furbo Dog Camera is a connected device fitted with a high-definition (and infra-red) livestreaming camera, a two-way microphone (so you can listed and talk to your dog), and a treat tosser, which can be used remotely from one’s smartphone app. It is designed to allow you to see and interact with your dog when you are out and about, be notified of barking and toss treats as rewards. Tomofun, the American company which developed it, looked to solve the problem of dog owners who must separate from their dogs for periods of time and found a smart way to allow them “to always be together”.

Specifics are as below:

Furbo also has adhesive feet to prevent capsizing. This is particularly useful in case you place it at a dog’s height and your furry friend gets a bit over excited about it. 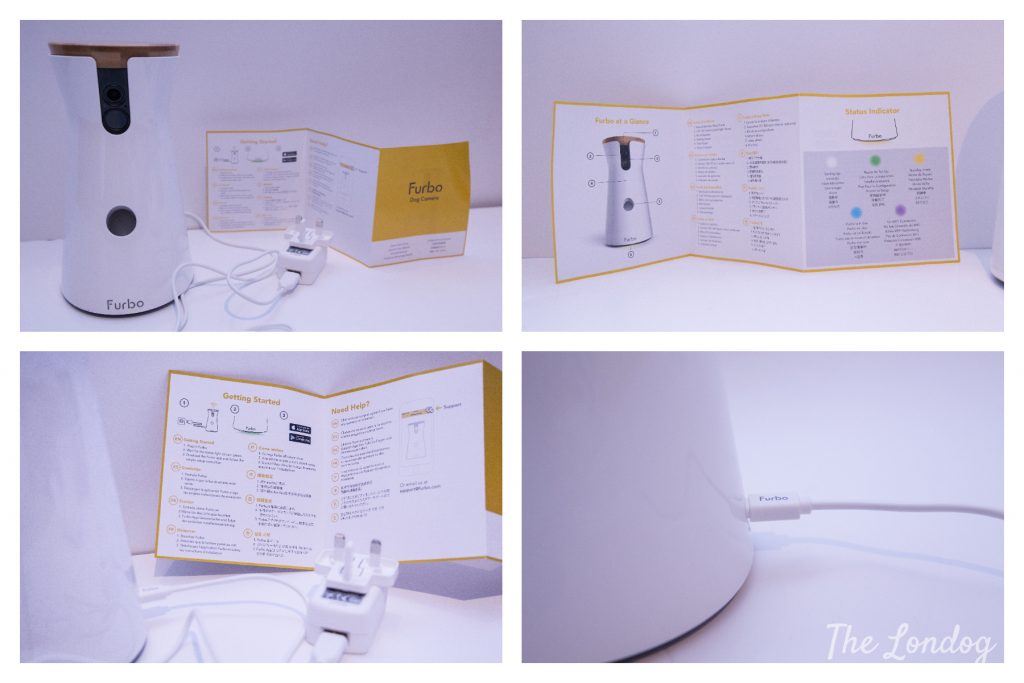 When the box arrived – as it usually happens – Argo’s sense of smell detected that it contained something interesting and it was probably for him, so he did not leave my side until I unwrapped it. Karkalis Communications, who we had been in touch with, had provided some doggie treats for the Furbo in the box, and Argo was already excited and ready to work for the treats.

When I opened the (sleek) packaging, I found the Furbo. It was an elegant and glistering object, slightly bigger than I had imagined it. I loved the design, with its white smooth surface and a polished sturdy bamboo cap which gives the object a warmer touch. 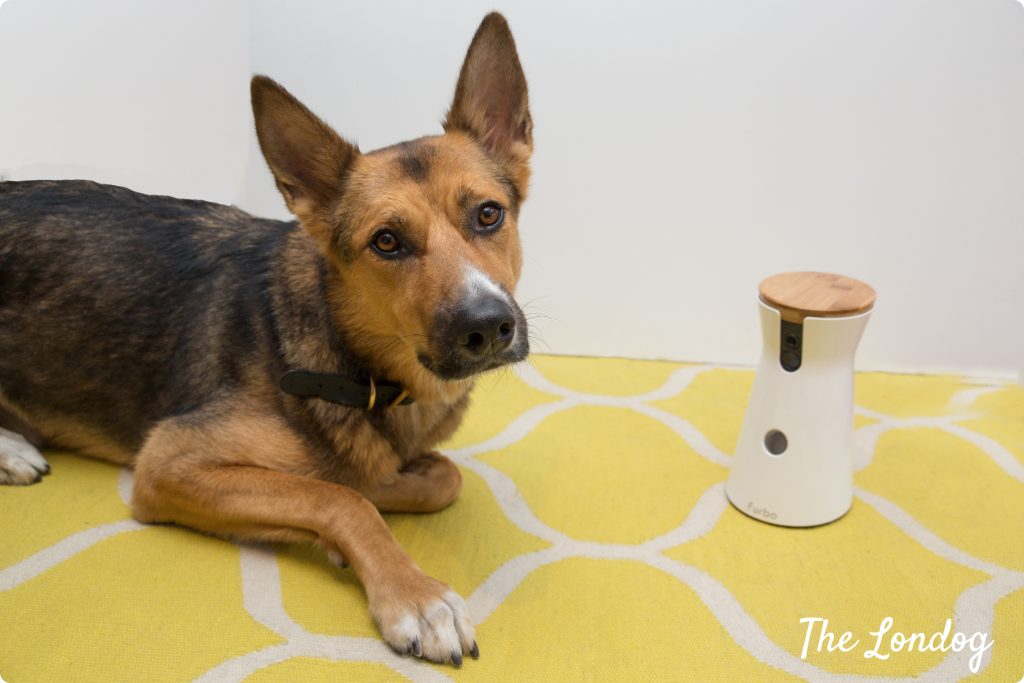 Furbo Dog Camera is our first Internet of Things device. I tend to be not too patient in learning how to use new technological devices, so I was very positively impressed as the Furbo came with a brief clear step-by-step user’s guide.

The set-up was seamless. I mounted the power adapted (both a UK and European plug are provided in the box) and plugged the Furbo in. Then, I downloaded the app from the playstore on my iOS smartphone and went through the step-by-step instructions as they appeared on the screen. All the process was very easy to follow. In just a few minutes, the Furbo was set up and I could see myself and Argo waiving and wagging his tail from the streamed video within the Furbo app!

The day after, my husband decided to set it up on his Android phone too. The first time he tried, he registered as a new user, but the Furbo was displaying a yellow light and the devices seemed not to be communicating. Reading the troubleshooting FAQs, we finally realised that it was our mistake: he shouldn’t have created a new account, but accessed the Furbo with the one I had previously set up instead. At the second try (this time with the right account), he still had some trouble connecting (the green light was not appearing on the Furbo), but thanks to some other troubleshooting FAQs, after unplugging first and a resetting the Furbo after, his bluetooth finally connected to the dog camera and completed the app set up. Althought this was a bit more laborious, we felt that the troubleshooting FAQs were brilliant and addressed all we needed to solve the issue without too much of a headache.

Another issue that we were able to solve thanks to the troubleshooting FAQs was an echo issue, when speaking in the microphone from my phone while being in the same room as the Furbo. I had a look at the troubleshooting Q&As that are available directly in the app, and tried their suggestions. While turning the smartphone volume down did not solve the issue, distancing from the Furbo was the answer! 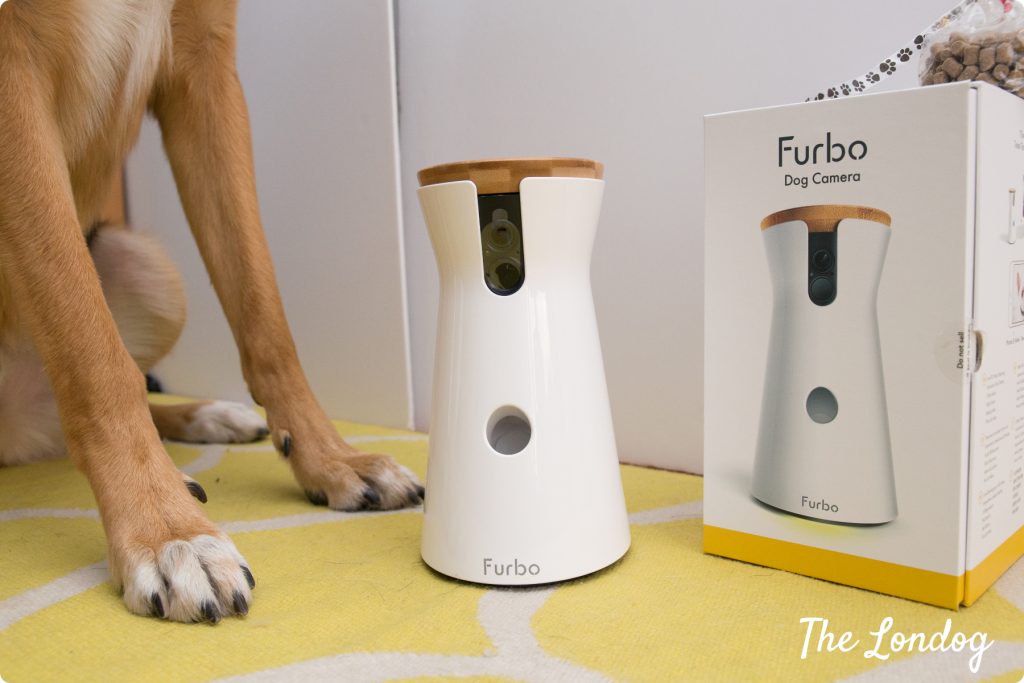 I can’t wait to give Furbo a full trial. I will tell you my thoughts about it after a full two-month trial, to assess what we can achieve with it. For now, just my very first impressions.

Five stars: what we absolutely love 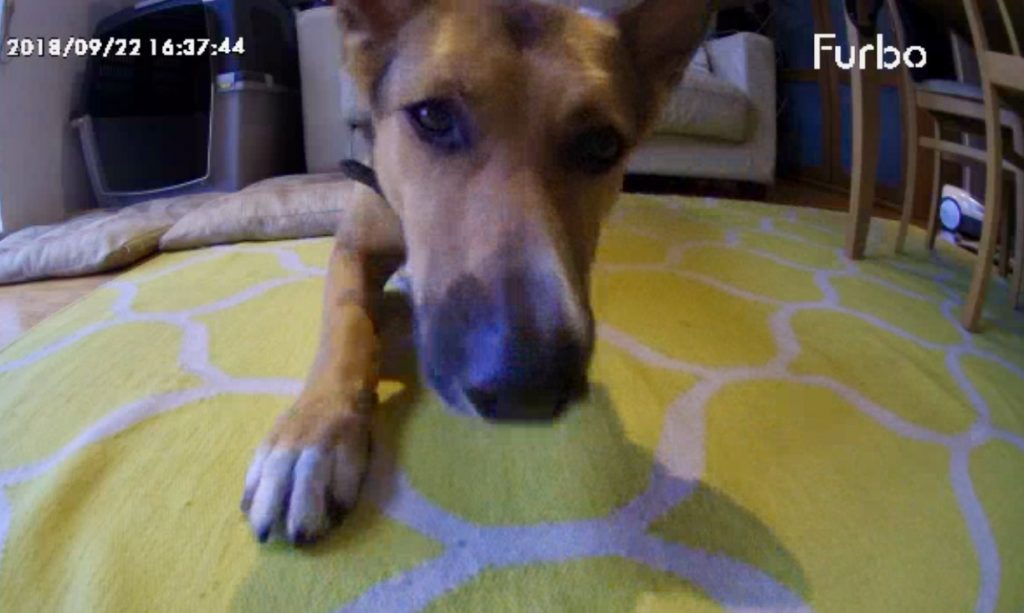 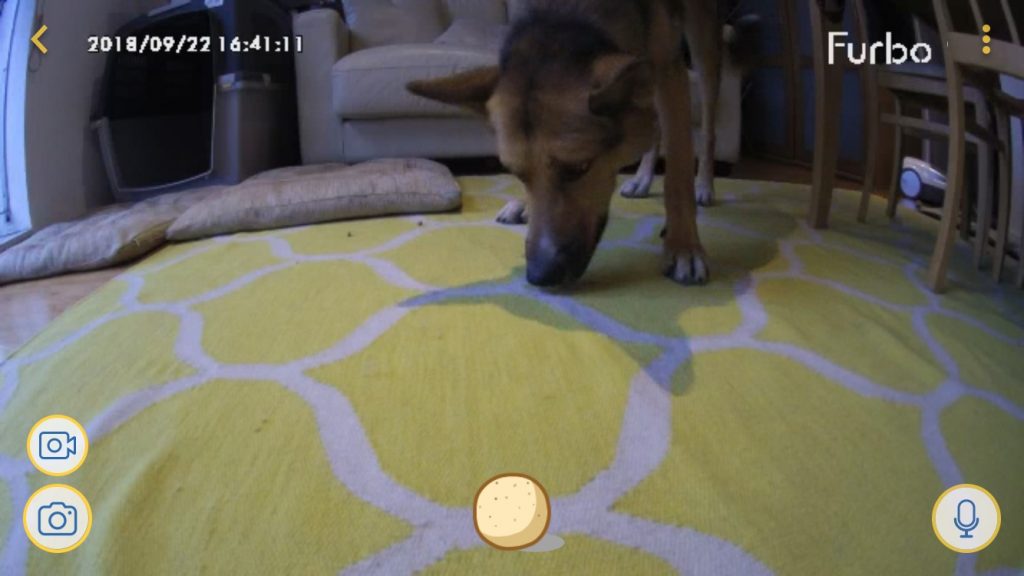 Features that we’d love to see in the future


A feature that we would love to see in the future is an alert for movement detection in a certain area of the room. This would be an invaluable resource in training out undesired behaviours like jumping on the sofa, hanging around the waste bin or (Argo doesn’t do it but there are some videos of very smart dogs doing this too) jumping on the kitchen counter (you HAVE to check out this video of a what a certain beagle is capable of, if you haven’t watched it yet). Basically, this would alert dog parents when their pooch could get in trouble or is breaking the household rules. Further to this, it would be great to see a carbon monoxide/smoke detection feature to give further peace of mind to dog parents.

Being able to interact with Argo at any time

When the box arrived, I thought that my primary use of the Furbo would not be checking on Argo for the sake of being connected, but a specific training purpose I’ll tell you more about below. This just because, while I like to keep an eye on Argo, he doesn’t spend that much time home alone, so I am normally not too concerned about his well-being while I am out.

However, after the first day of using it, I confess that I actually got very excited about this part of having a Furbo! It is great to be able to check on him, see what he is up to, interact with him and toss him treats. I find it fascinating to be able to see his secret life, when he thinks nobody is watching! 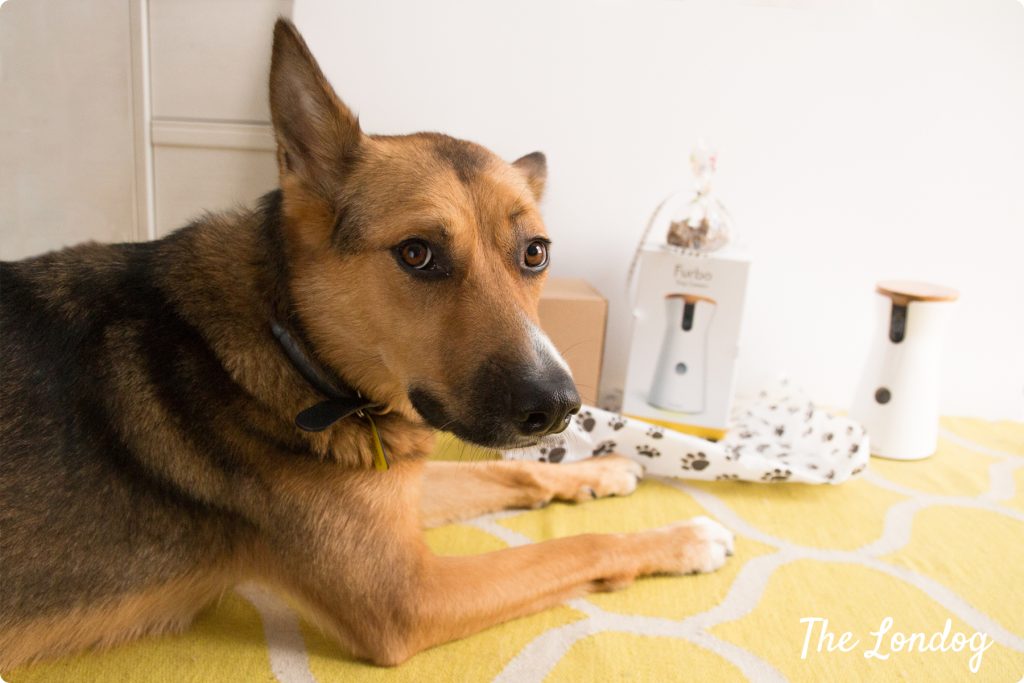 There had been some works outside our building and he had become quite worried and anxious about loud noises. One day, when the workers were busy with some noisy tools, Argo repeatedly tried to jump on my husband while he was sleeping in bed, probably looking for a safe place. Since that episode, clues as fur on the bedcover and a ditch in the mattress, indicated that Argo started to regularly jump on our bed when we are out and about.

Living in an open space definitely does not help phasing out this acquired bad habit of his, and, so far, we tried a number of things, including placing the mattress in a vertical position (which is not the nicer or most convenient thing in the world to do). So guess what’s our plan for testing the Furbo? My husband and I will use it to try and re-train Argo, leveraging verbal cues and positive reinforcement.

Will our heroes succeed in the plan and sleep again in an immaculate fur-less bed? I hope to tell you that we did in a couple of months! Wish us good luck!

Where to find Furbo

Furbo Dog Camera’s retail price is £249  and it is available online. Furbo offers free delivery in the UK and a 30-days money back guarantee, along with a 2 years warranty.

Disclosure: As highlighted at the start of this blog post, this is a sponsored post, however all views are our own.