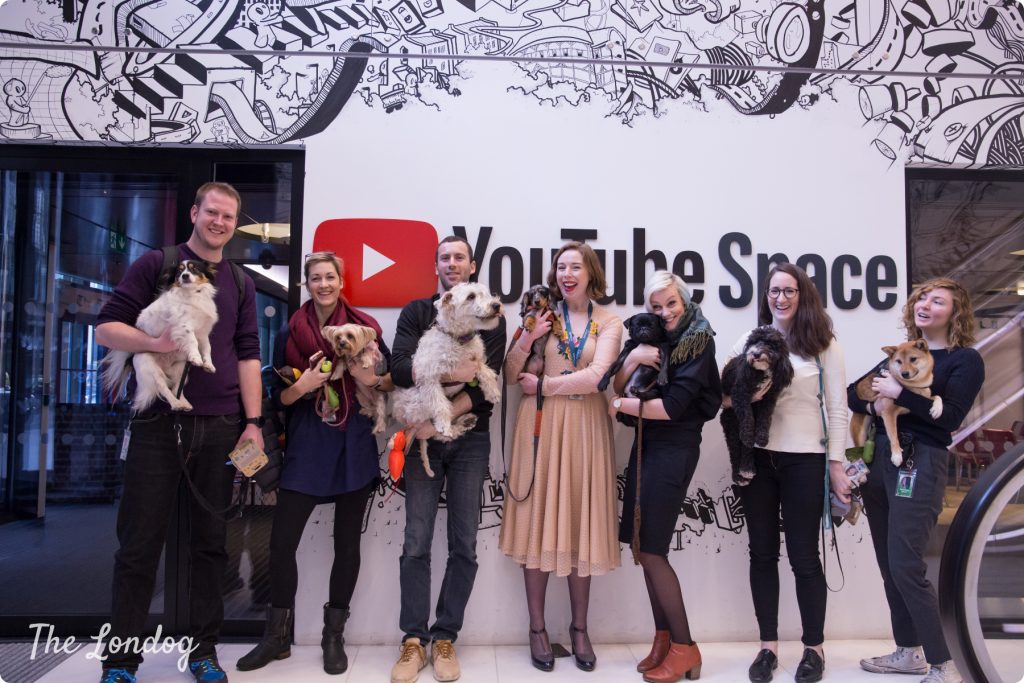 Google has a well-established dog-friendly policy and a large office dog pack: the Dooglers. Last year we interviewed Horatio the Pug from the St Giles office. One year on, we take you to Google’s Kings Cross HQ to meet ten canine representatives of the pack! 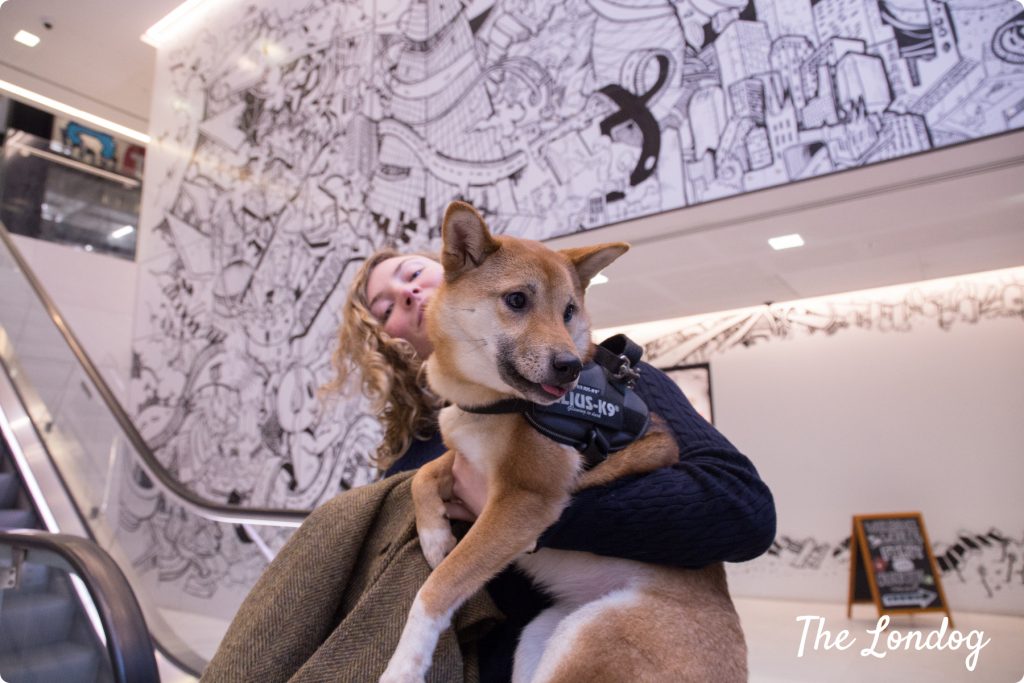 Unlike other tech giants (like Facebook and Amazon), which operate a dog-friendly policy at their US offices but keep dogs out of their UK bases, Google fully embraces the love for canines and welcomes dogs at work also at its London quarters.

With four main offices just in London, three of which dog-friendly (the odd one isn’t just because of building rules), Google may be the company with the highest number of furry team-members in town. An estimation says that the London Dooglers may be about 70. When we visited the St Giles’ office, we found a dog wall of fame, with photos of the four-legged who regularly go to work with their Googlers. Also the other venues have similar features and one of the offices even named the printers after some of the Dooglers!

This year we met the pack at the YouTube Space in Kings Cross. Horatio the Pug acted as ringleader and supervised the photoshoot, running around to make sure that all the dogs were having fun (and checking that no treats were left uneaten/unattended). 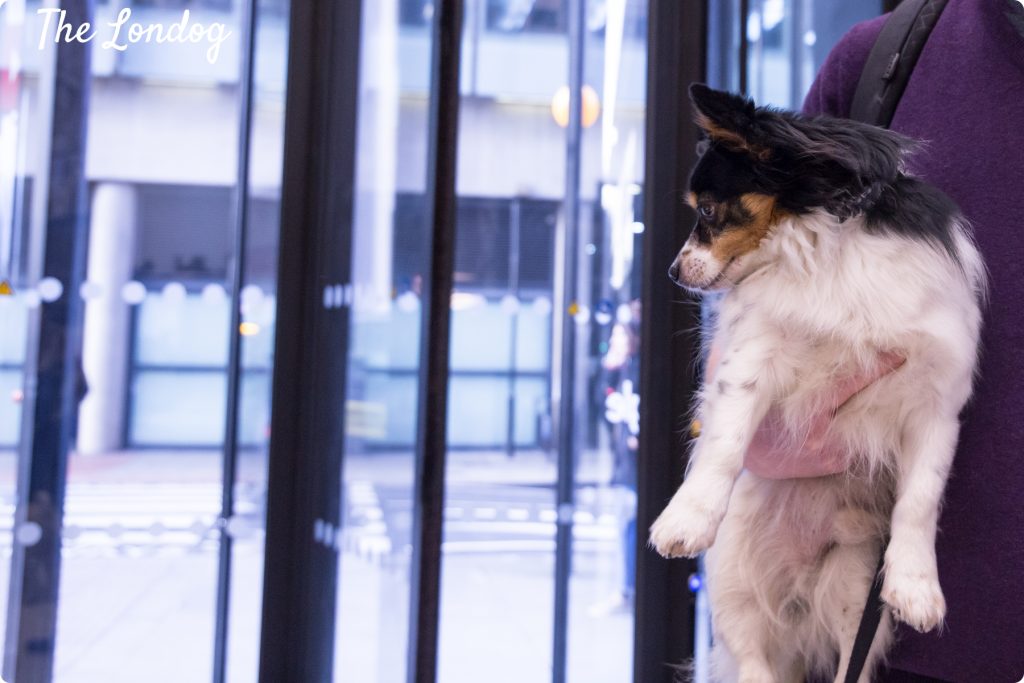 Oscar is a 5 year old Papillon. “He’s a little shy with other dogs, but loves human attention provided that it doesn’t approach him from above”, says his dad Peter. “More people in the office seem to know him than know me (I think at least partly because he spends so much time being looked after by the rest of my group when I’m not around!). At the office he makes his home in a dog bed inside a purple moving box, and enjoys collecting his toys there.”

When Peter presented on stage at Google I/O developer festival, he showed a photo of Oscar on the big screens, so he enjoyed virtual limelight too!

“When I’m at my desk he’s usually off the lead, and does his rounds saying hello to each person on the team”, says Peter. “He enjoys coming to meetings (I think it’s the bulk movement of people that’s exciting), but is sometimes bored by the content. Generally, he doesn’t have time for tech nonsense; his thinking is mostly on a higher plane.” 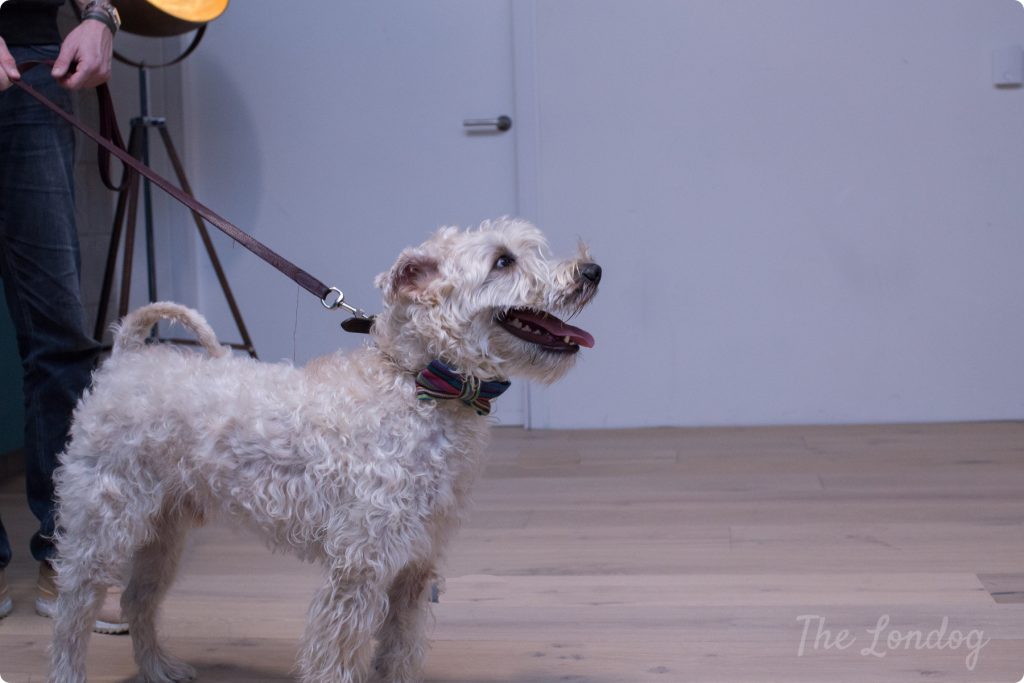 Mustang, the Irish Soft-Coated Wheaten Terrier, is the YouTube Space London’s mascot. He has a best friend, Bunter from Google Policy, with whom he has regular playdates.

“He is named after the classic American car Mustang Boss, as his breeder is a big fan of these cars and named the whole litter after them”, explains his owner David. “We decided to keep the name as the pup is quite fond of jumping and prancing, just like the Mustang horses! He’s also obsessed with sticks, squirrels (never pronounce that word aloud or he’ll start chasing around the house barking). He doesn’t really dislike anything and is rather overly social, which can become a problem around other dogs and humans.”

When at the YouTube Space, “We try to keep him entertained with footballs, giant polar bears, yummy treats, tug of war; but we keep him away from shoes and pens!” says David. 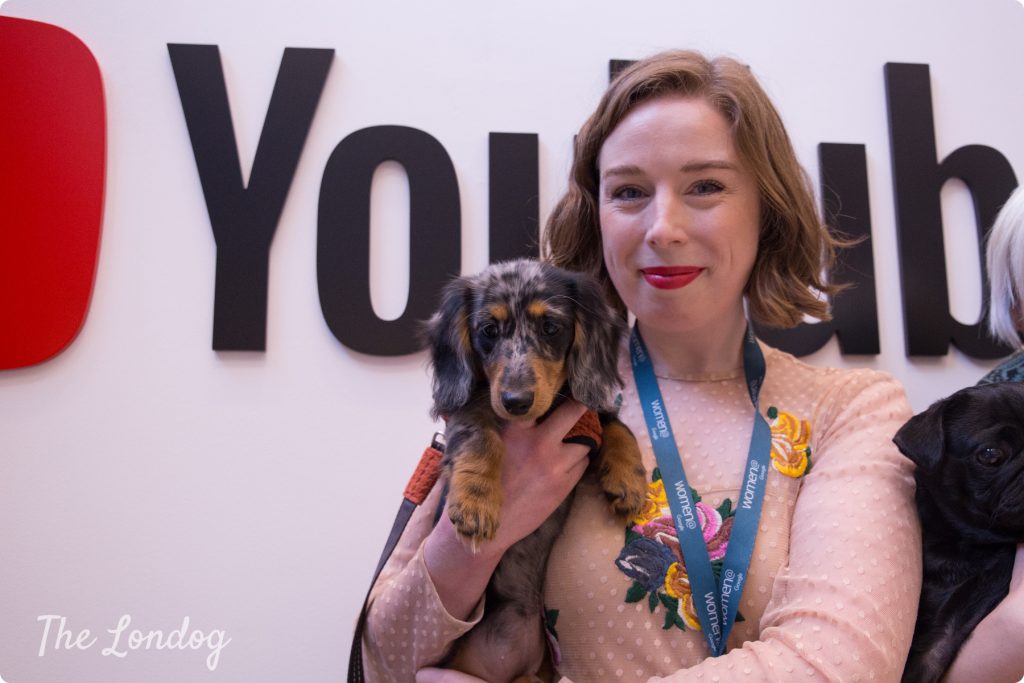 Sylvie is an adorable tiny 4-month old  silver dapple long-haired Miniature Dachshund. The day of the photoshoot was her very first trip into Google, and first day as a Doogler, how exciting! She was quite shy and felt safe between her mum’s legs. If Sylvie were a famous character she would be: Dorothy from the Wizard of Oz, “Very unsure about being outside, just wants to be home”, says Jenni.

Sylvie likes:
soft play areas, ice cubes, sausage, expressing herself, chewing on an antler but only if you’re holding it for her, crying, pretending to die after she’s been told no, being high up.
Hates:
being cold, the baby gate that stops her going into the bedroom, bath time. 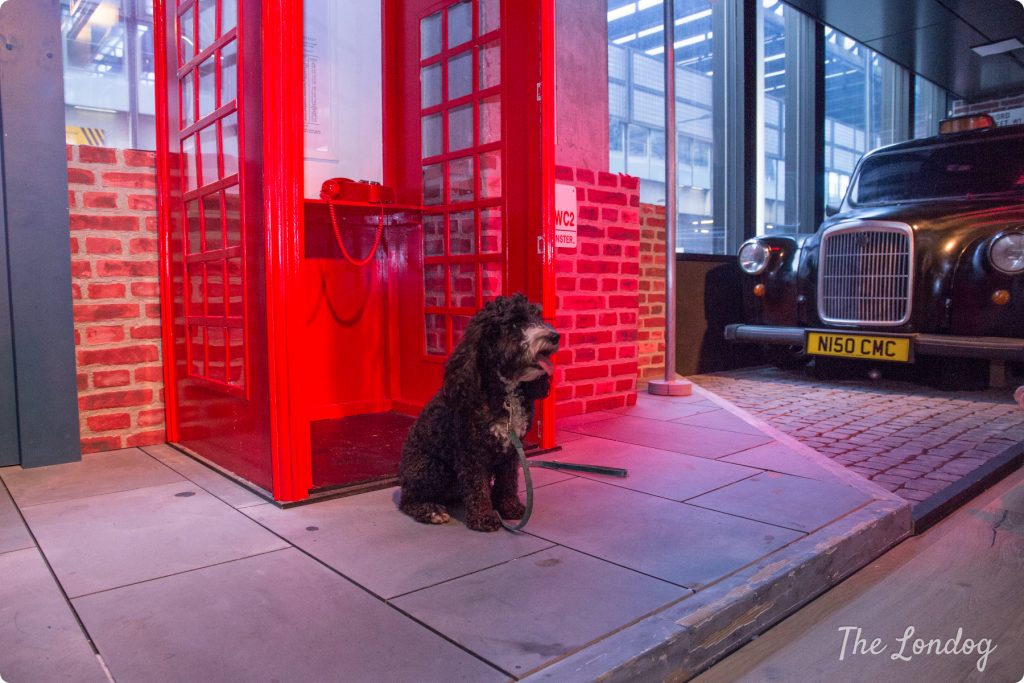 Stella the Cockapoo is said to be a “big love monster” and a bit of wallflower, not really interested in other dogs. “I think she thinks she’s a human”, adds her owner, Rose.

Likes: Chasing tennis balls, licking faces, belly rubs, snuggling on the couch, leaving muddy pawprints on white sheets.
Dislikes: Guy Fawkes night/month
Funniest habit: Runs from wherever she is in the house if she hears me & my husband kiss.
Famous character: Pepe le Pew because she kind of looks like him.

Mia is an extrovert one year old Pug. Her mum, Aida, recounts that “Mia can go from napping to snacking in 0.1 seconds and can lick non-stop for 25 minutes in a row. She’s very sociable with other dogs and she loves (and craves!) human attention. She snores louder than anyone at home and her favourite place to sleep is on top of human heads (in the sofa, in the bed, wherever!).”

Mia is a fan of Harry Potter and an enemy of vacuum cleaners, in any form, size and shape. “She wouldn’t hesitate to follow anyone in the street for a good venison doggie sausage treat – but loves her owners”, adds Aida.

Mia also has an adopted sister: Honey the a rescue Bug (Boston Terrier cross Pug). Honey’s age is uncertain, since before being rescued she had been living in a backyard in Liverpool for 4+ years and used for breeding until she could not get pregnant anymore and was neglected. “Her hearing is only 50% due to continuous ear infections and a number of surgeries”, adds Aida. Luckily she found a very loving family and is now a very happy dog.

“She is the sweetest dog, always under a warm duvet, in front of the heating or under her bed blanket. She is known in the neighborhood for peeing in her two front legs (hand-stand!). Honey is a lover of warm days in, and doesn’t get along with rain or snow (tough luck since we live in London!)”, notes Aida. 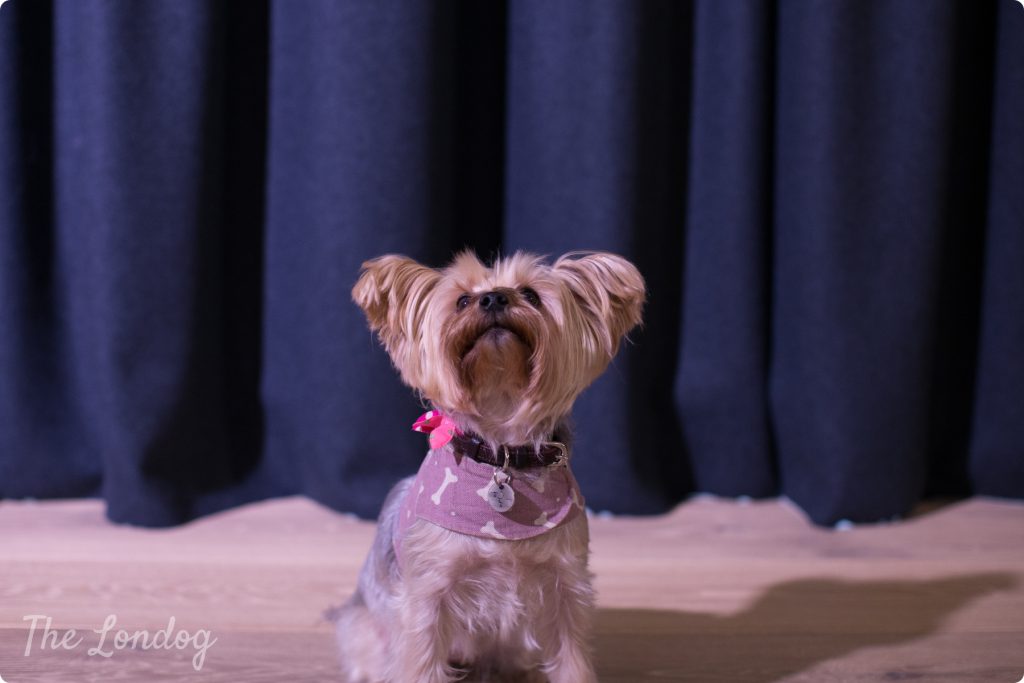 According to her mum, Nicole, Noodlez’s occupation is being a Diva, and if she was a famous carachter she would be simply herself: “why impersonate when you out-diva them all?!”.

Noodlez likes:
Playing continuous ball all the time and playing with my donkey or sheep.
Dislikes:
Her bald brother Michael (human) – she would return him if she had the power. 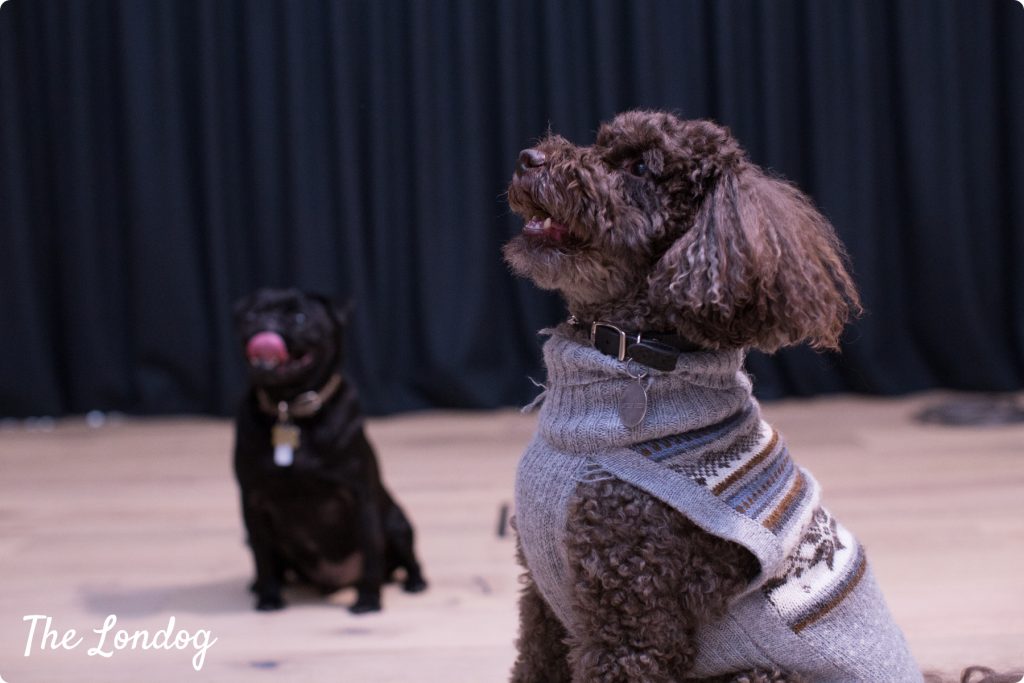 Louis is a 7 years old Miniature Brown Poodle, whose dog tag reads “Lou (after Reed)”. His mum, Rose, says, “He LOVES other dogs but is obsessed with the ball pits in the offices and loves nothing more than diving head first in… swoooooosh! Louis often ‘talks’ – he tries to verbalise. It’s just that humans don’t understand ‘Poodle’.”

If he was human he would be Iggy Pop’s half brother: “He has attitude – don’t mess with him! Seriously! We are also inclined to believe he shares the same chromosomes as Roky Erickson too. ‘Two headed dog’ and all the rest (the fluffy tail and fluffy fur face)”, adds Rose. 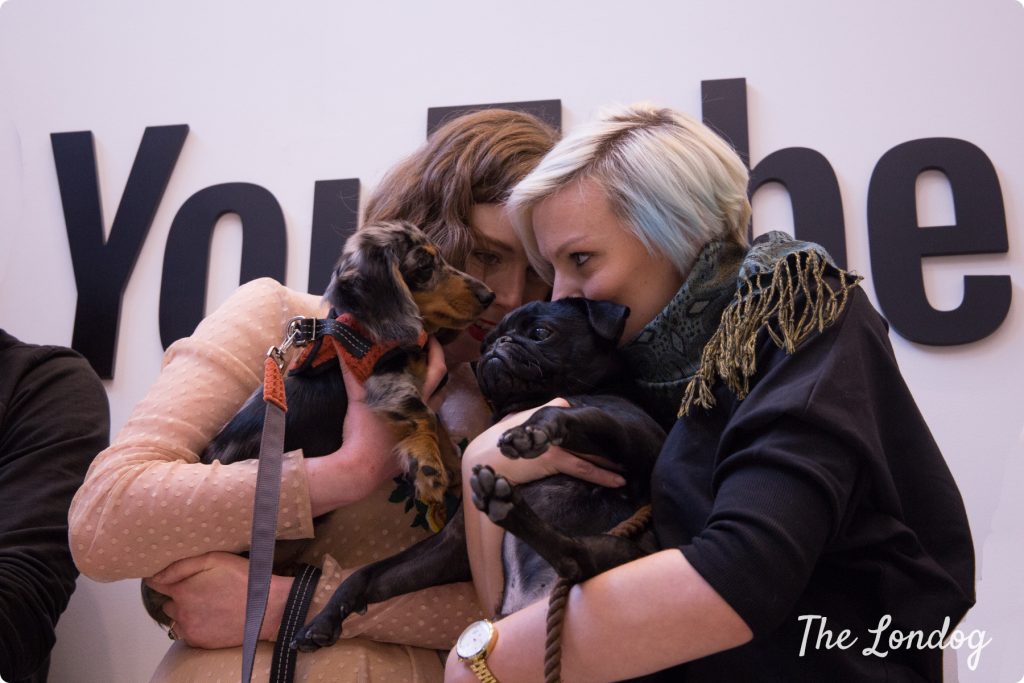 A few episode populate the Dooglers’ wall of shame/wall of fame as recounted by the Googlers: 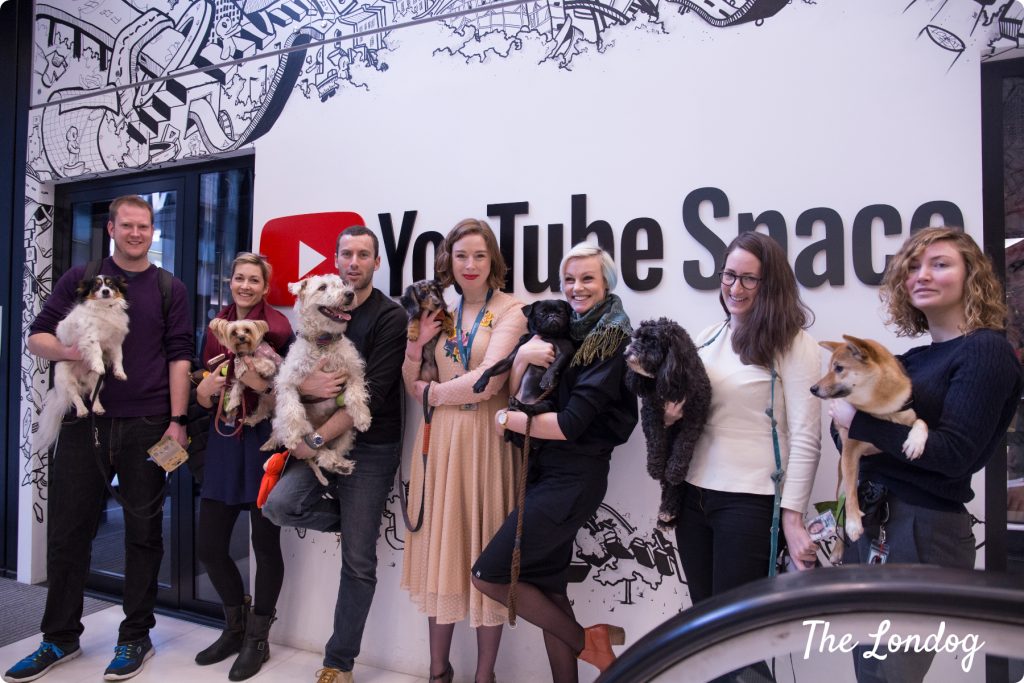 And it’s a WRAP! The Dooglers conclude this edition of the Office Dog Series. Stay tuned for the next one, coming soon on The Londog.

Related posts | This week in the Office Dog Series: