By The LondogFebruary 5, 2020No Comments 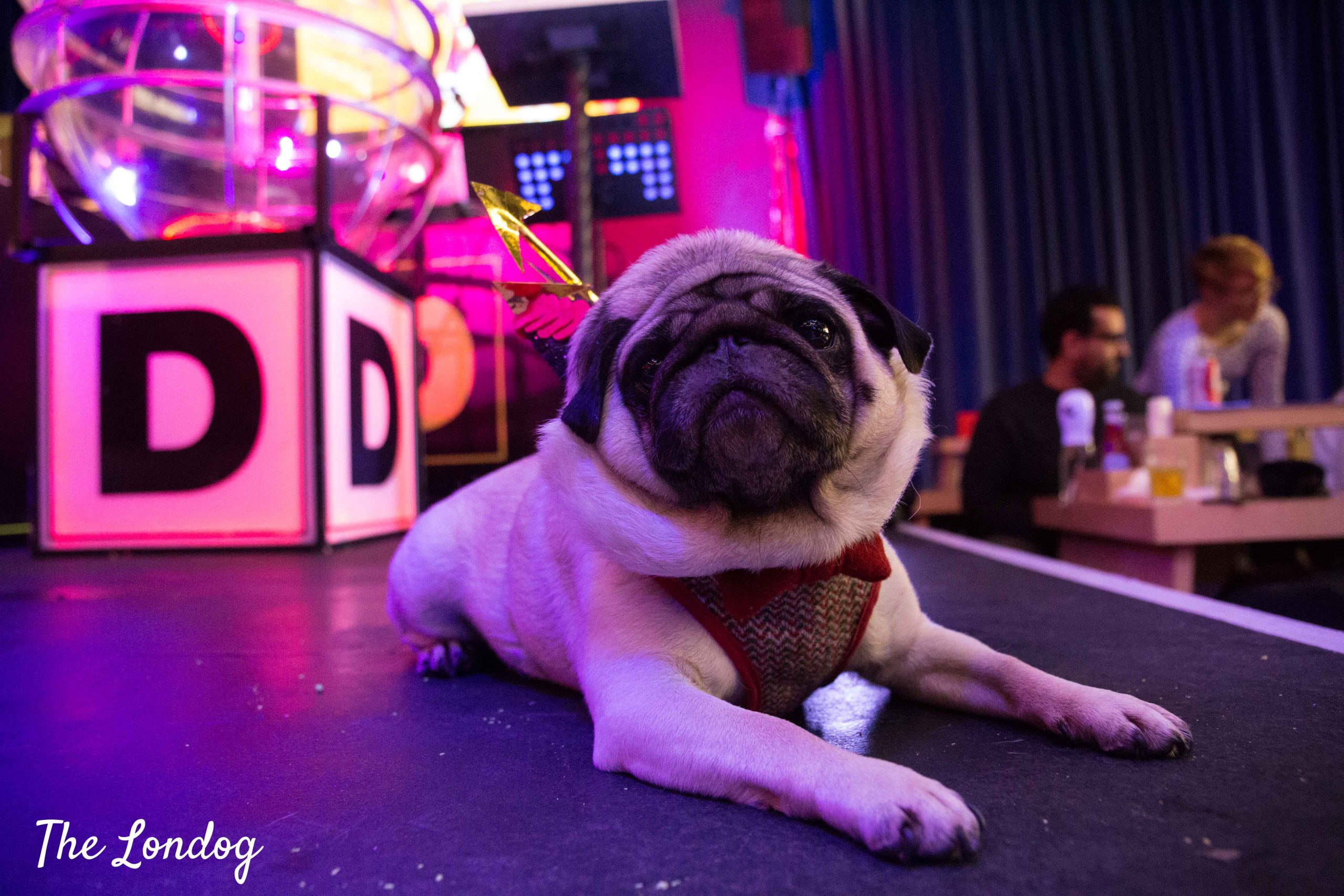 Did you know that Dabbers Social Bingo, a cool bingo venue in the heart of the City, is hosting bi-monthly Doggie Bingo sessions, where Londoners can bring their dog to a vibrant dog-friendly bingo show in London? We were invited to attend their February dog-friendly event and in this post we tell you all about it. Plus a bonus track… we are pleased to announce a giveaway for 5 tickets for the April session! Read more to find out how to participate. [in the cover photo: Gizmo the pug] 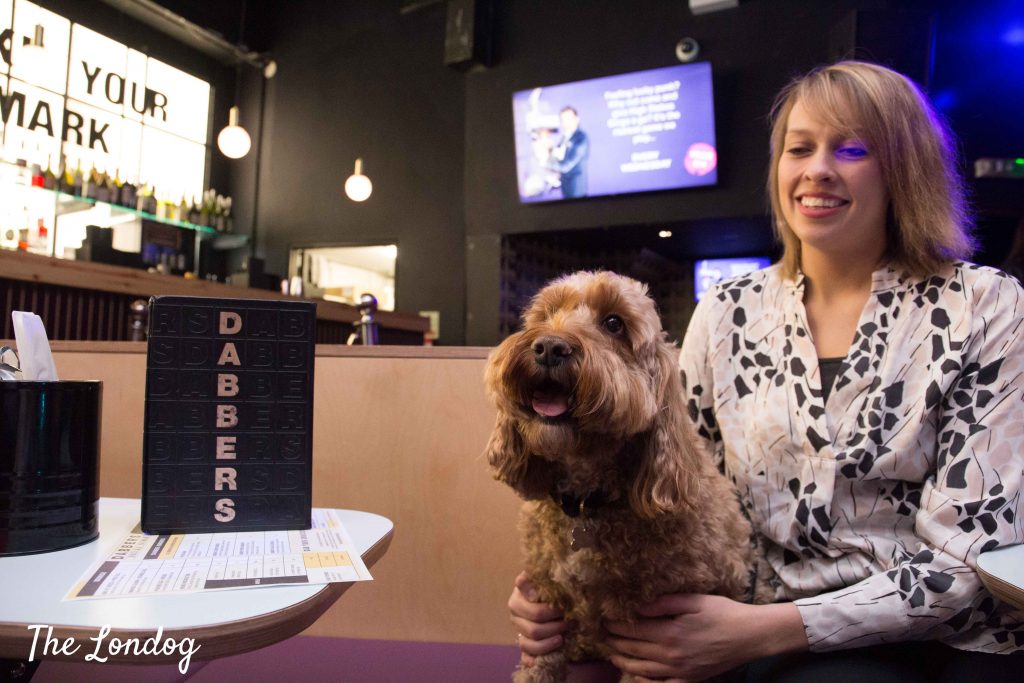 Dabbers Bingo has been hosting special dog-friendly bingo events, Doggie Bingo, since August 2019 – you may have seen previous events listings about it in our Dog Events Calendar -. Their regular bingo shows are not dog-friendly, so if you fancy the idea of bringing your dog along, watch for these special events.

If you are a UK native, you will be probably familiar with Bingo, as the game has had a great success in the island. In case you aren’t, a quick explanatio: the aim of the game is for players to be the first to mark off a line or an entire box of numbers on special cards as the numbers are drawn randomly by a caller. 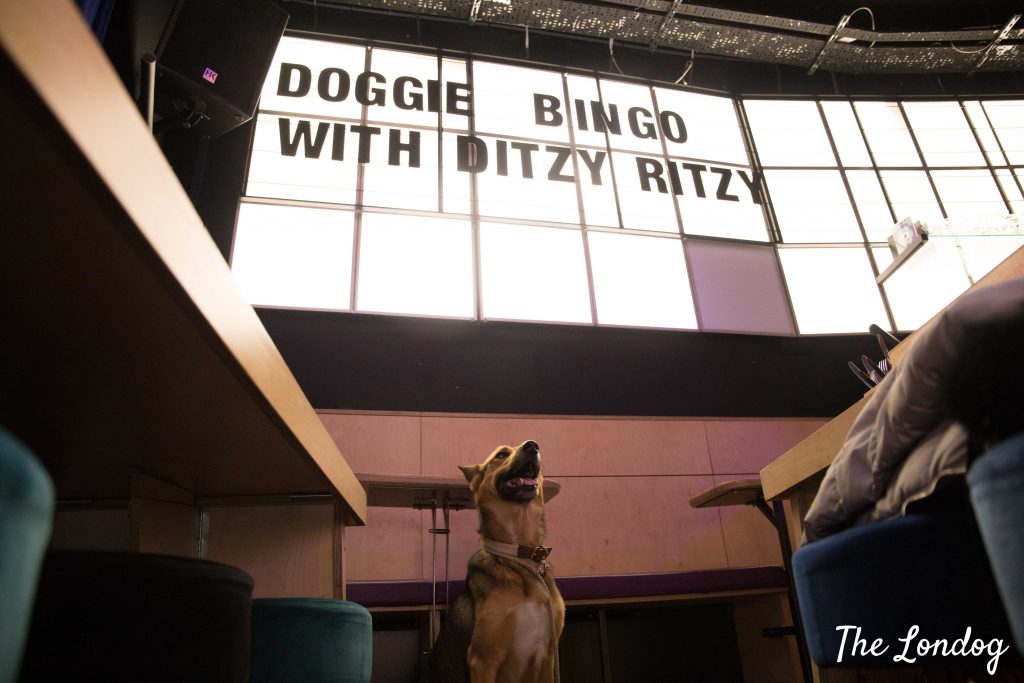 ‘Dabbers’ is the name of the special markers used to mark the cards. So don’t do like us, who naively asked the waiter for a pen, and had to be told by the couple sitting next to us what a dabber was and how to use it (after we tried to mark the card with the dabbers with cap on). That also marked the moment when we realised that the multitude of what we had thought to be saltcellars on the long tables around the stage were in fact dabbers for each seating – not quite the dubious salty tastes we thought about! Definitely a country where a bingo marker has a special name must be one of bingo enthusiasts!

What to expect from Doggie Bingo 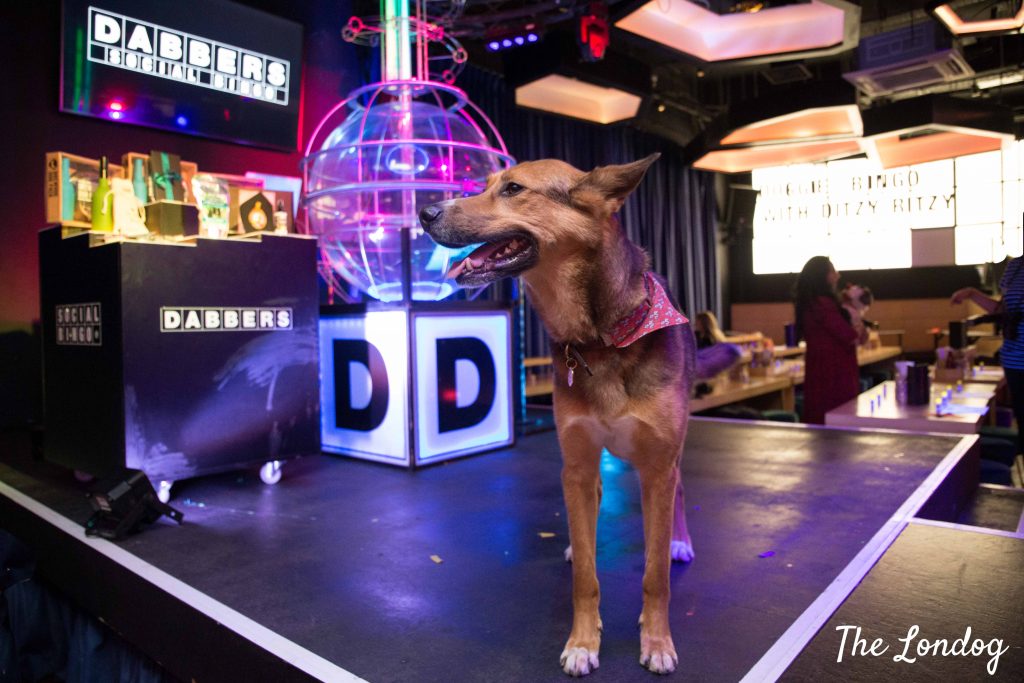 Dabbers Social Bingo’s venue is a bit hidden between the tall buildings and skyscrapers near Aldgate. The bingo room, down in the basement, is a pretty cool place, with luminescent panels, velvet curtains, a stage with colourful lights and a big transparent ball in which balls with numbers twirl. Add many tables with velvet covered stools and benches and many glowing little dabbers standing on the tables.

We didn’t have any particular expectations for the afternoon, since in Europe (at least in our home country) bingo is something you would only do with your family on New Year’s Eve (marking reusable bingo cards with beans – I know, how odd this sounds) and is not a particularly exciting activity. 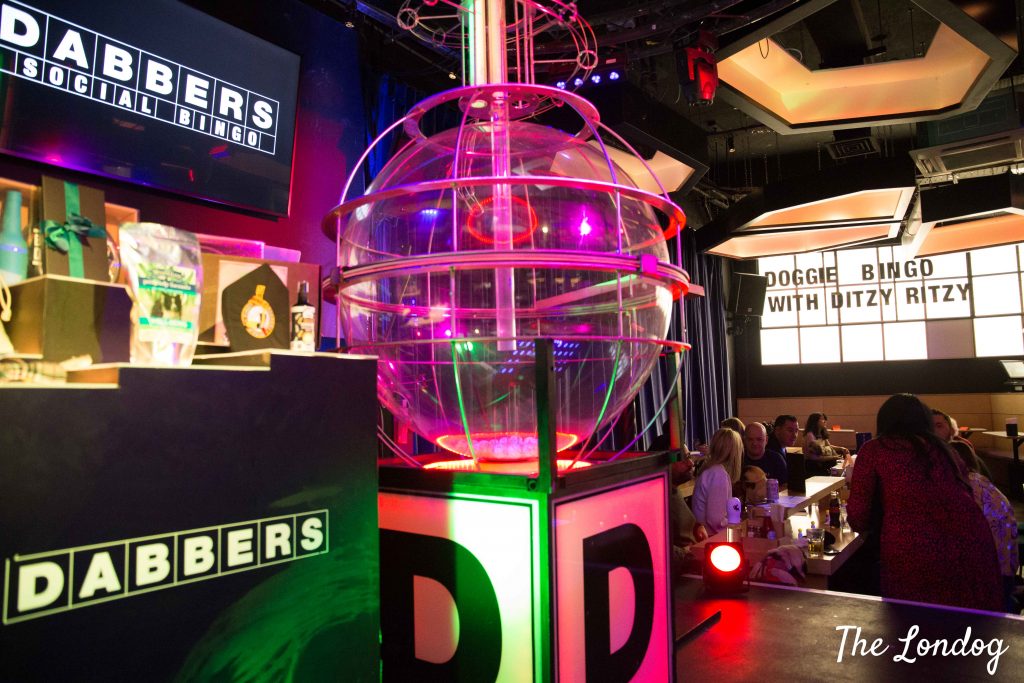 The afternoon was a blast! There were so many lovely dogs attending, some of whom have become regulars since the start of the dog-friendly bingo events. Dabbers Social Bingo also has a kitchen and a bar and, after ordering fries and drinks and taking photos around, we were ready at our table (a long table we shared with other people and their dogs), when Ditzy Ritzy, the host of the event, made an entrance and started calling numbers with a doggie twist. 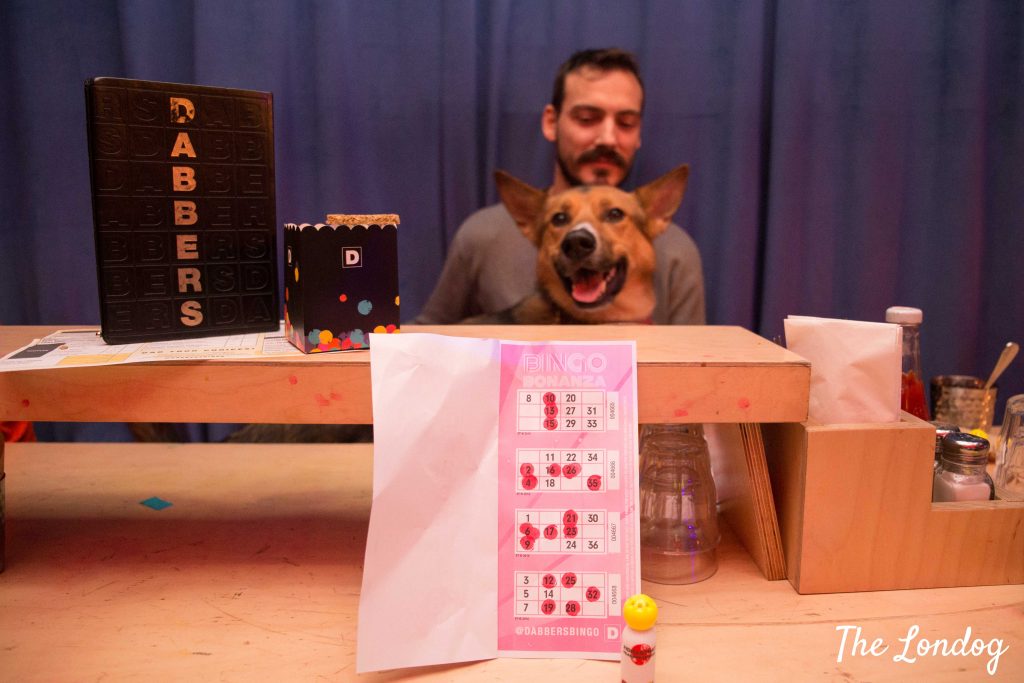 Doggie prizes were sponsored by BrewDog and PetsPyjamas and included bowls, dog toys, treats, doogie beer, dog bow ties and more. Enthusiastic dogs and their owners would climb on stage to collect their prizes at every successful bingo, but that was not all about it. In between calls there were some disco balls and two fun breaks: dog tricks and best in show. 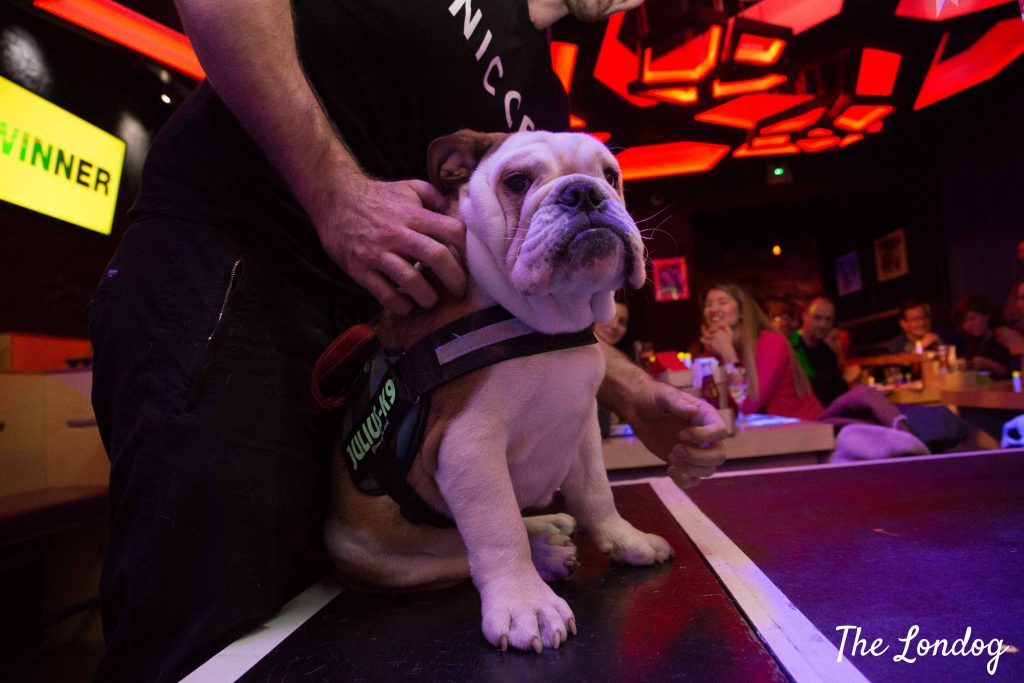 Zeus, winner of the Best in Show

Phoenix, a border collie from Canada, showed an amazing trick repertoire and very rightfully got a pack of treats and a rosette for that. The Best in Show, on the other hand, allowed both dogs and humans to participate. It was a hard choice among all lovely canines and people, but Zeus the English Bulldog, with his 32 kilos of sweetness at 6 months old, was crowned best in show. 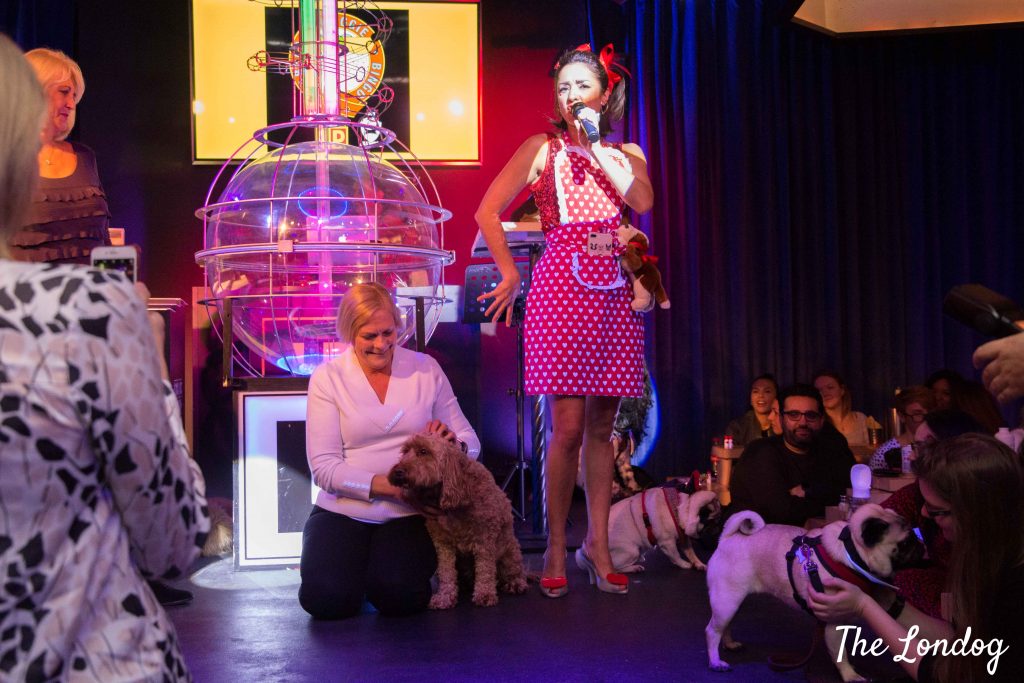 Waiters slalomed through the tables with doggie biscuits at hand and dog water bowls were served upon request. In a nutshell, it was doggie paradise and human’s fun. I very much enjoyed this first go at bingo and will definitely go back another time! 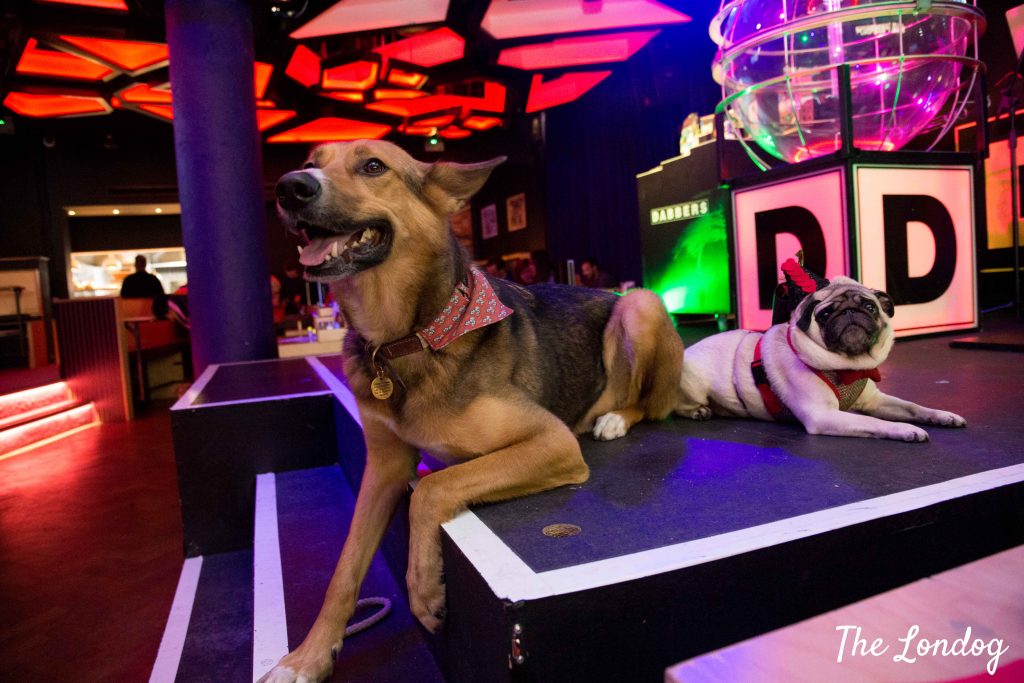 Win tickets for the next Doggie Bingo at Dabbers Social Bingo 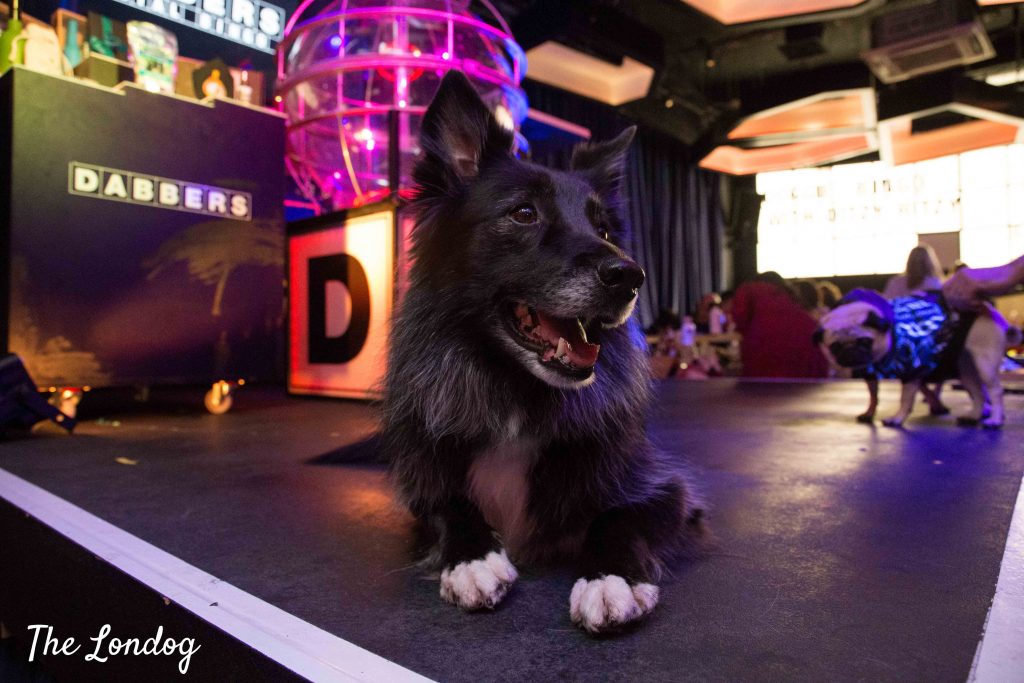 Competition time! Courtesy of Dabbers Social Bingo, we have a 5-person baller booth, including doggie treats as well as 2 pitchers of Brewdog beer for the humans! Sounds intriguing?

Some other important terms: Entrants must be over 18 and UK residents. Valid for up to 5 adults and accompanying dogs to any Doggie Bingo show before 30th June 2020. Places are subject to availability – if 5 person baller booth is unavailable, tickets can be transferred to social seating. Not transferable to any other show. The prize cannot be exchanged for money. For full event details and terms, please visit www.dabbers.bingo/shows/doggie-bingo/

Closest station: Aldgate is a couple of minutes walk; but Aldgate East and Liverpool Street station are also at walking distance

Doggie Bingo shows: The show lasts two hours (door open at 1pm, show starts at 2pm until 4pm). Dogs are only allowed at the Doggie Bingo shows, the next of which will be held on Sunday 5th April 2020. For further dates please check our Dog Events Calendar.

Tickets: Tickets have different prices depending on the seats you pick. The social/theatre style is priced at £12 per person, then there are multi-seat options available.

Dog policy: Dogs must be kept on a lead when in the venue and must not be left unattended. For more information read the Doggie Bingo dog policy