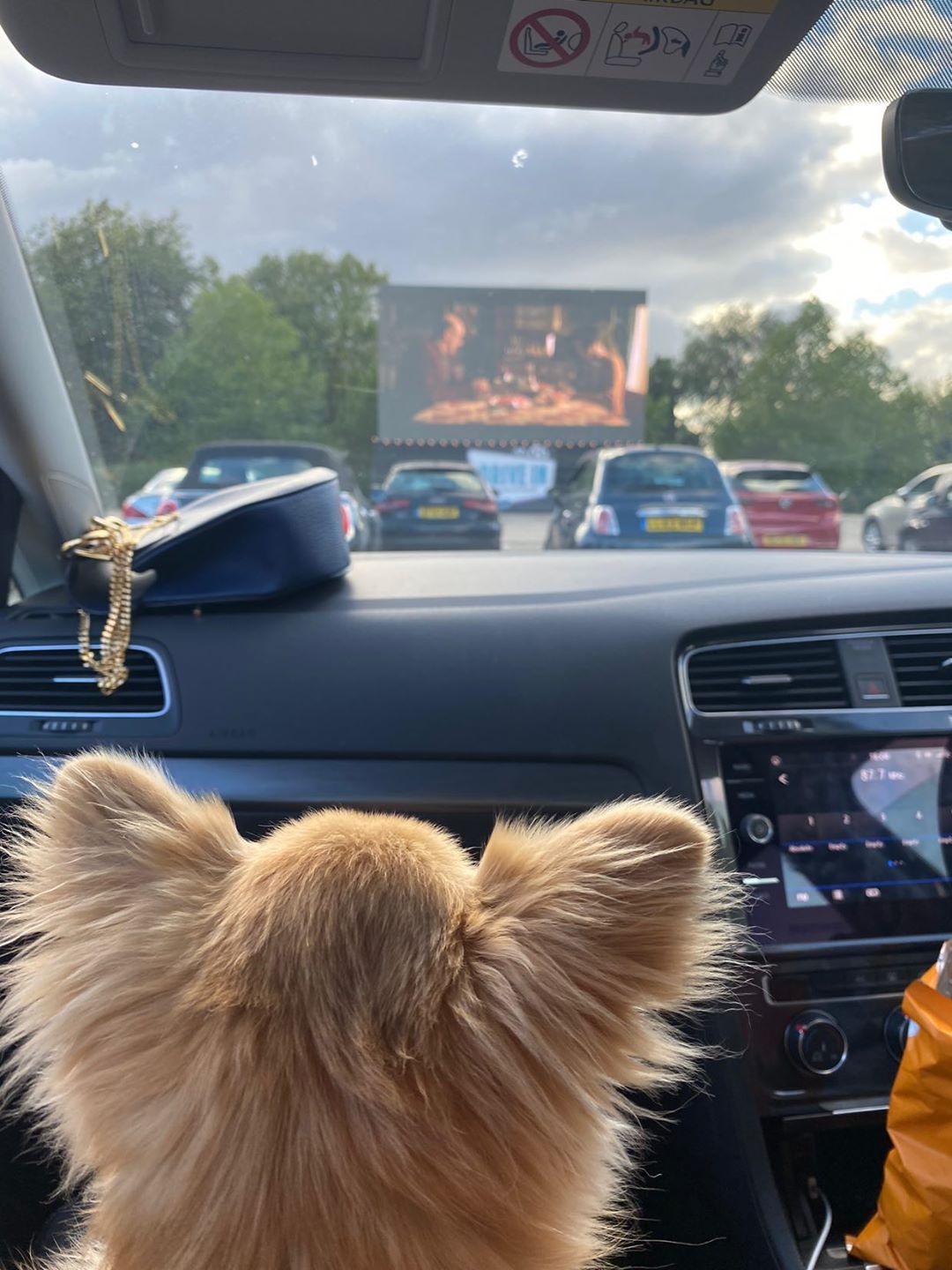 If you fancy enjoying cinema from the comfort of your car and not having to leave your dog at home, more relevant than ever, drive-in cinemas allow you to enjoy old and new pictures with your family of human and furry ones. While not all venues allow dogs, we have dug out 3 dog-friendly drive-in cinemas in London that are open until mid or end of September and we tell you all you need to know.

What always springs to mind when I think of drive-ins is a scene from the Disney film That Darn Cat (the 1965 version), with hilarious moments of cat at ruining a drive-in experience. Not quite what you should expect from your dog-friendly drive-in experience, though. Get your dog comfortable, bring a blanket for you (it can get chilly, especially with windows open to avoid steam), make sure your car radio is working properly and drive to the pictures for savouring an out-of-the-ordinary experience!

The Rooftop Film Club’s Drive-in Club runs in Alexandra Palace through October 2020 so you have only few days left to catch the chance. The Drive In is hosting its screenings until the end of the month, and so is the very original Float-In Openaire cinema on the Regent’s Canal, where the car is replaced by a boat! Pictures at all three cinemas space from old to new titles, so there is something for everyone to watch. 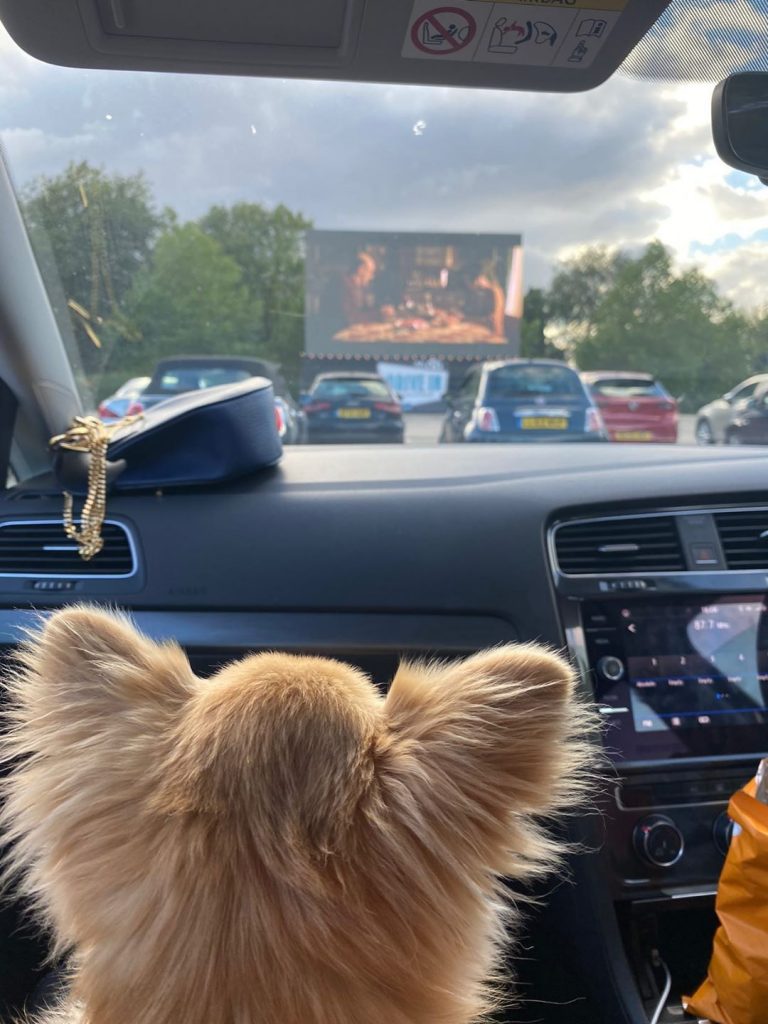 The Rooftop Film Club, which for the past years has been offering Summer outdoor cinema screenings on its London rooftops, including a dog-friendly venue on top of Bussey Building, in Peckham, has adapted its offering to Covid times and launched a drive-in cinema in Alexandra Palace, North London. The Drive-In Film Club – how the Rooftop Film Club named the experience –  welcomes pooches to join their humans. From the comfort – and social distance – of your car, you can watch a film while tasting some veggie burger or cinema snacks.

The movies are projected onto a 40-foot screen and movie audio broadcast through the FM transmitter radio in your vehicle.

Ralph, a rescue chihuahua cross from the Dogs Trust (@ralphtherescuechi) and his humans recently visited the drive-in, to watch the great classic “Amelie”. The appreciated the experience as Ralph is a nervous little guy who doesn’t like to be left alone,  so activities they can do as a family are important, plus he loves watching films at home.

“We hadn’t been to a drive in before but with Covid it seemed like a great and safe activity,” say Ralph’s humans. “Ralph sat on our laps, watching the film mostly but sometimes trying to see if he could get a bite of our vegan hotdogs that the drive through had. We could park up 45 minutes early and take Ralph for a quick walk around AlexandrA Palace before the film started. The atmosphere was very relaxed and dog-friendly – It was fun.”

They recommend the experience and add that it may be best best if you have a small dog that is comfortable sat on your lap. Some tips from them? “Get there early to walk your dog before. Keep the windows open while seated. Bring water and snacks for your dog.”

When: Until 9th September 2020,- UPDATE: after a pause, the Rooftop Film Club has released its October 2020 drive-in programme – check out available dates and times here

Food and drinks: You are welcome to bring your own food and drink, but there are also food and beverage on-site, with contactless order and delivery to your vehicle by the Rooftop Film Club skaters. On the menu there are cinema snacks such as popcorn, sweets and soft drinks, plus there is plant-based fast food Popdogs offering a mouthwatering menu. 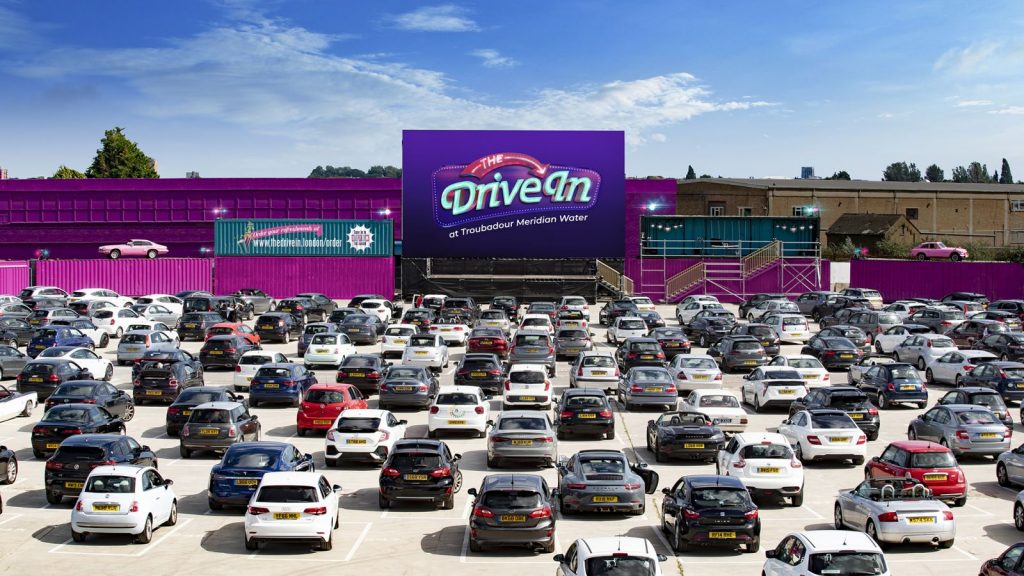 Credits: The Drive In

The Drive-In, in South Chingford, North-East London, offers you the proper drive-in experience and your dog will be welcome at the screening too. The only restrictions are that dogs are not taken for walks or toilet breaks at the venue and that dogs dogs with a tendency to bark out are left at home.

In case you don’t have a car, this Drive-in also allows pedestrians/cyclists: all you’ll need is to purchase a bay ticket (that is for up to 5 people) and bring your own seats and radio (through which the movie audio is broadcast). In case you don’t have a radio, you can purchase one on site for £15. They also sell rain ponchos and camping chairs. They also have a Zipcar promotion in case you wish to hire a car to watch the film. Zipcar is a dog-friendly car sharing company, however they require dogs are kept in pet carriers at all times (find our more about dog-friendly car sharing and car rental companies in our guide), so you consider whether your dog will really enjoy the experience.

Film programme and bookings: you can find the films that are on and dates, and book your tickets on The Drive-in’s website here.

Food and drinks: You can bring your own food and drinks. A licensed bar and food stalls will be available on site, with burgers, fries, popcorn and more. Details on how to order at arrival or you can pre-order on their website. 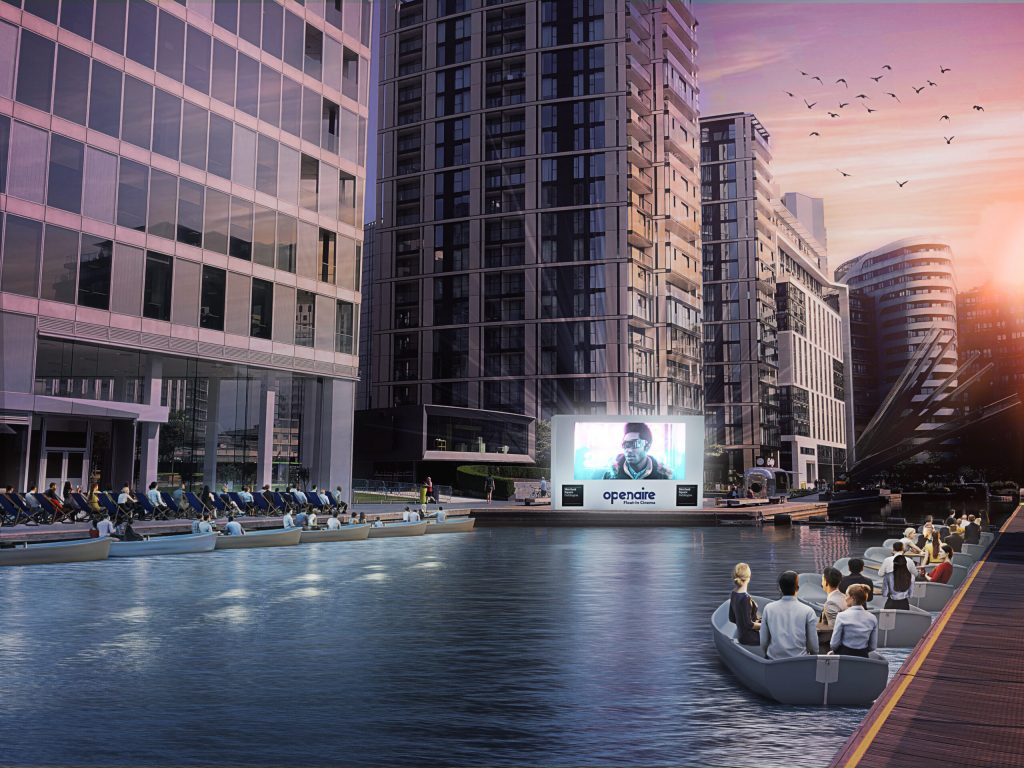 Something very different is the “float-in” Openaire cinema in Merchant Square, in Little Venice, West London, organised by Openaire, Merchant Square and GoBoat, with the support of Häagen-Dazs… there you won’t need a car, but instead you will enjoy the cinema screening from a self-drive electric boat on the Regent’s Canal, with your own crew of up to 8 between humans and dogs. The experience includes a self-drive one-hour trip on the canal before the screening, just bring a harness/lifebuoy for your dog for safety.

As you may guess, the experience comes at a price (from £200.00 which includes boat hire for six people and film), but if you can alternatively get a ticket for a deckchair on land to enjoy the screening. Find all you need to know about the dog-friendly float-in boat cinema in our previous post.

How to get there: By public transport, the nearest station is Edgware Road and Paddington station is a short walk away. You can get the shortest route using the Citymapper map below (opens in your own app if you have it installed).