How to fly with a dog between the UK and Europe 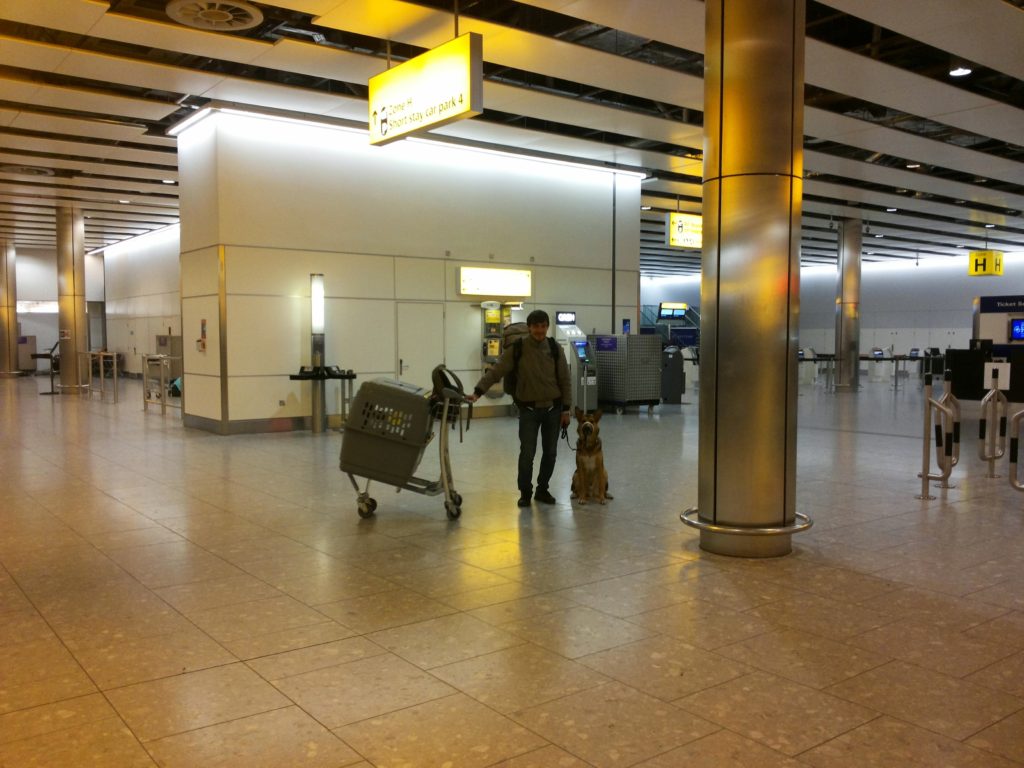 My husband and dog at Heathrow terminal before leaving


When I moved to the UK I thought that flying with my dog would have been the last option: he is a medium/big sized dog and I was not a fan of the idea of having him travelling in a plane’s cargo hold. Last year, though, we had planned a month in Italy and hiring a car in the UK for such a long time would have been very unconvenient, so we decided to try the plane-solution.

In this post I will provide you with all the relevant information for getting a plane to another European country with your dog and share my personal experience.

Taking your dog to Europe by plane 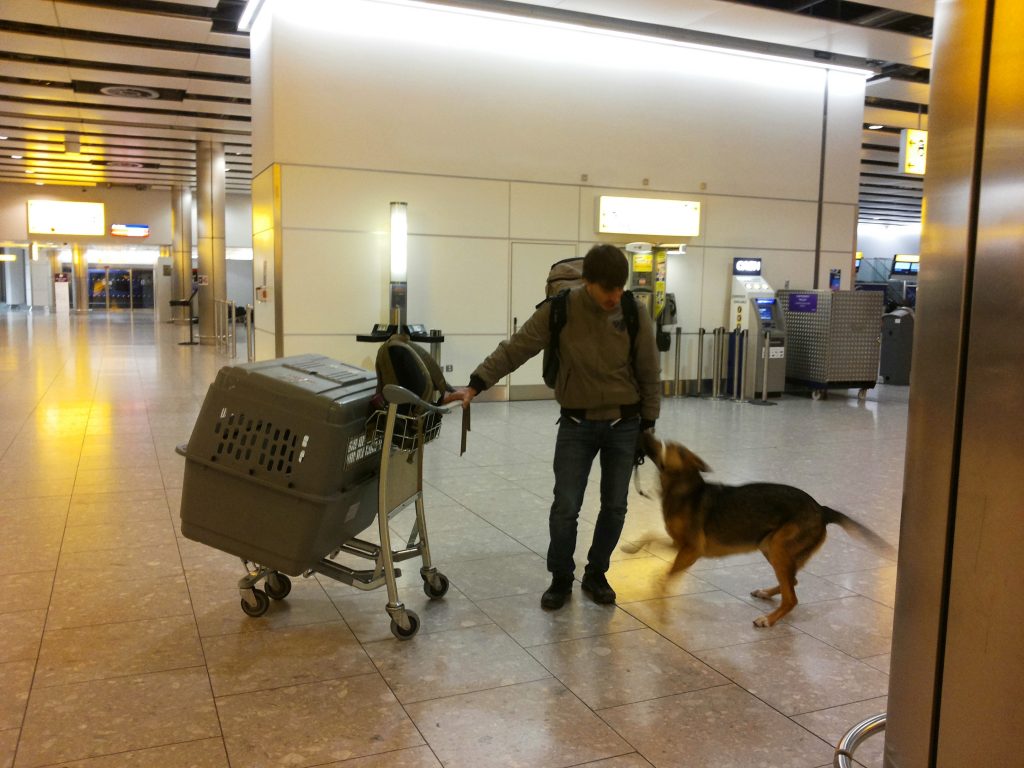 Unless you are willing to spend thousands of pounds to fly with your big dog on a private outbound charter, first of all you will need to check with the aircarrier you wish to travel with if they accept pets and what are the conditions, including whether they would directly accept your dog or they would require you to use an animal shipper, which would take care of handling your four-legged friend (this latter option can be pretty costly).

In fact, some airlines do not accept pets at all (as, for examples, low cost companies such as Ryanair, EasyJet, etc.), others might only accept small pets of a maximum weight, taken in a carriage bag into the cabin, others would also allow big dogs to be placed in a crate in the hold. In addition, payable fees may vary, as well as the conditions for transport (max n. of dogs per flight, max. dimensions of the crate, max. weight of the dog, prior booking, routes on which admitted, need for an animal shipper, etc.). Different conditions apply to guide dogs, which are generally welcome on board and travel for free.

You can find the pet travel scheme rules which need to be complied with when travelling with a dog to or from the UK in my previous blogpost. These include microchipping, European Pet Passport, rabies vaccination and, for inbound travels, a tapeworm treatment.

On top of the general pet travel scheme rules, you will be asked by the airline to produce a pet health certificate, issued by a vet, stating that the dog is healthy and fit to fly.

If your dog needs to travel in the plane’s cargo hold, in most cases you will need to find a crate which complies with the International Air Transport Association’s (IATA) Live Animals Regulations (LAR), which detail the container requirements for dogs and cats (the link is to the latest version available at the moment, i.e., January 2016).

Currently IATA represents 260 airlines global wide and, although it is not a regulatory authority, its Live Animals Regulations are widely adopted as the minimum standard requirements for air transportation of animals (as an example, in the UK they are indicated by DEFRA in this regard) or have been taken as a model for other legal instruments. I spoke with a IATA’s representative, who told me that LAR “were accepted by the Convention on International Trade in Endangered Species of Wild Fauna and Flora (CITES) and the World Organisation for Animal Health (OIE) as guidelines in respect of transportation of animals by air [and] used by  the Council of Europe as a basis for its code of conduct for the international transport  of farm animals [see here]. The European Union has adopted the IATA Live Animals Regulations as the minimum standard for transporting animals in containers, pens and stalls [those are mentioned in Regulation 1/2005]. As an increasing number of countries have adopted or accepted these Regulations as a part of their national legislation, shippers are warned that shipping live animals in violation of the Regulations may constitute a breach of the applicable law and may be subject to legal penalties.”

Aside legal disquisitions, it is essential for anybody wishing to embark their dog to be aware of dimensions, material and shape requirements under IATA LAR before purchasing a crate, as well as to check the chosen airline requirements, because some may apply more stringent rules to containers.

A)     Dimensions of the pet container 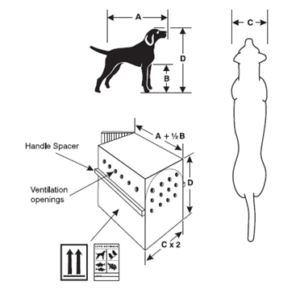 Under IATA rules, the required internal container dimensions are as showed in the picture above. The letters correspond to the following:

“A = length of animal from tip of nose to base/root of tail.
B = height from ground to elbow joint. A+1⁄2 B = length of container.
C = width across shoulders or widest point (whichever is the greater). Cx2 = width of container.
D = height of animal in natural standing position from top of the head or the ear tip to the floor (whichever is higher) / height of the container (top flat or arched)
Minimum internal container dimensions:
A + ½ B = Length  C x 2 + Width  D = Height
Snub nosed breeds require 10% larger”

B)     Material and shape of the pet container

IATA also provides for the minimum characteristics of the container. Those are quite detailed, so I suggest you directly refer to the LAR. In general, containers must be solid and not have wheels; the materials can vary, but containers made entirely of welded or wire mesh are not suitable for air transport and wooden containers shall met quite specific requisits. In addition, the guidance specifies the ventilation requirements for the containers.

Sedation. Animal sedation is not recommended by IATA and totally banned by some airlines, which warn about the risk of side effects that can happen while flying, also due to the pressure.

Futher guidance on the transport of certain breeds or in certain conditions such as pregnancy is contained in IATA’s LAR. A summary of the applicable rules, including for the case you are carrying more than one animal, is available on IATA’s webpage.

In addition, if you are not just planning to fly out of the UK, but also wish to fly inbound, you need to find an aircarrier listed in the approved air routes and fly on the correct airport.

Our experience flying our dog from the UK to Italy 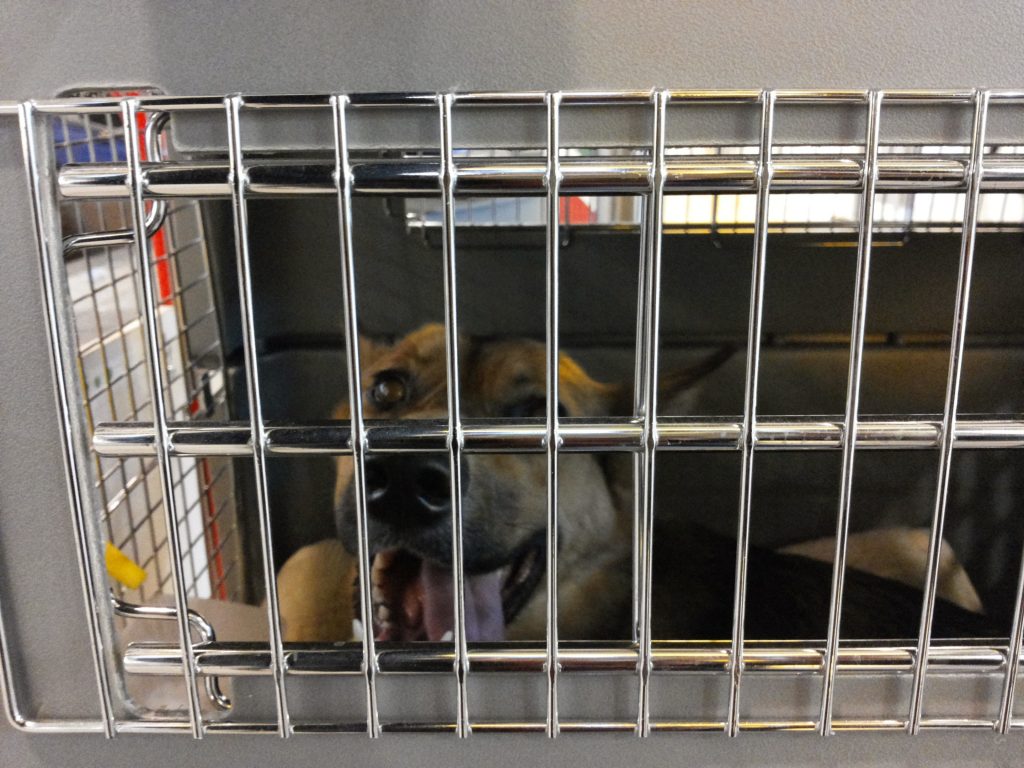 Last summer I and my husband decided that he would have taken our dog by plane to Italy, where we were supposed to go on holiday.

I started checking flights and pet transport conditions and, after receiving some crazy quotes (£981 from a company and £1,118  from another to take the dog to Venice with British Airways using an animal shipper), I discovered that Alitalia was actually very covenient.

I first checked with their contact center whether the dog could have flew from London Heathrow to Venice and I was told that it was not allowed on that particular route, but I could have instead used the London Heathrow – Milan Linate flight. So I booked my husband’s flight and a place in the hold for our dog (over the phone), which costed us less than €80 on top of my husband’s ticket.

Getting the right dog crate for the flight

I checked with them the characteristics of allowed crates. They emailed me a document, stating that they only accepted crates which shell was made of rigid plastic or fiberglass, and the lateral air scoop covered with metal bars rather than plastic ones. It was not so easy to find a crate complying with the metal bars air ventilation requirement, but in the end I had this sorted (this is a compliant crate).

Checking in at Heathrow Airport with a dog

The flight was taking off at 7.25am from London Heathrow and I accompanied my husband to the airport. We got there very early, because they had advised us to be at the airport well before time for the check-in and at least 90 minutes ealier.

Right after I took the first picture (see above in the post) we were told that dogs are not allowed out of a crate at Heathrow’s airport, so our furry friend had to be put in the cage straight away. At the check-in the hostess called for an attendant to come and escort our dog and my husband at the special control checks, but it took almost 1 hour before somebody came. We were given a trolley where to place the crate. 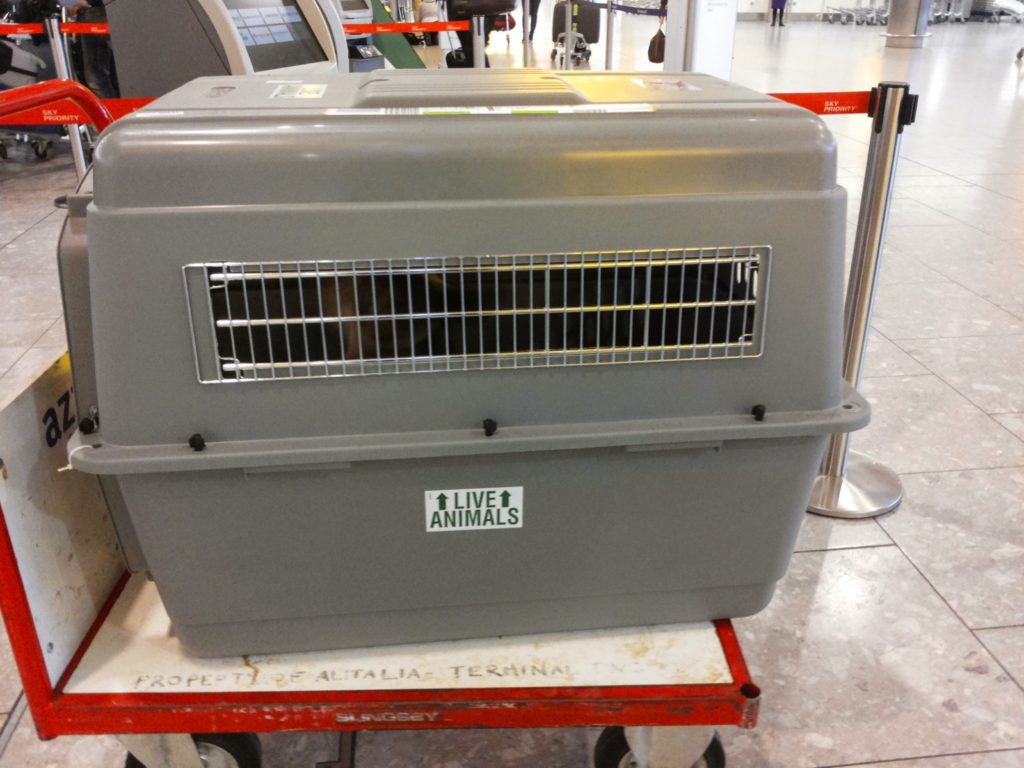 Being worried about comfort and temperature in the hold, I had bought a wool blanket to keep him warm. On his side, my husband was worried too, so, once on board, he talked to the pilot, to confirm he was aware that a dog would have been travelling in the hold and checked the temperature in the hold: the pilot was super kind and provided him with all the information.

All good it seemed, until the arrival in Milan Linate.

My husband waited for an attendant to carry our dog’s crate in the luggage area and saw an awful scene. The crate had not been put on a trolley, but was pushed by the attendant with kicks and hand pushes, with our dog terrified in the crate. We were disturbed by this shockingly unprofessional handling.

In addition, my husband soon discovered that our dog had vomited and pooed in the crate for the fear, and, apart from regretting not having given him some tranquillizer (because this was forbidden by the airline and we were advised that could have dangerous side effects during the flight), we agreed that this was the first and last time we took him on a plane. 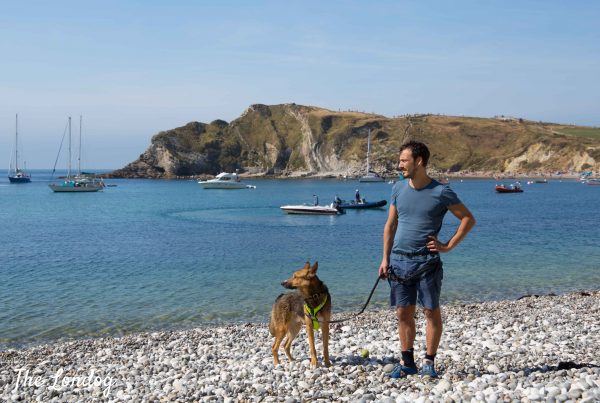 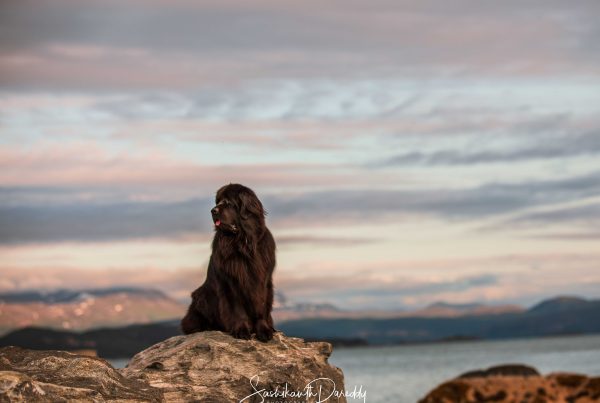