By The LondogOctober 28, 2020No Comments 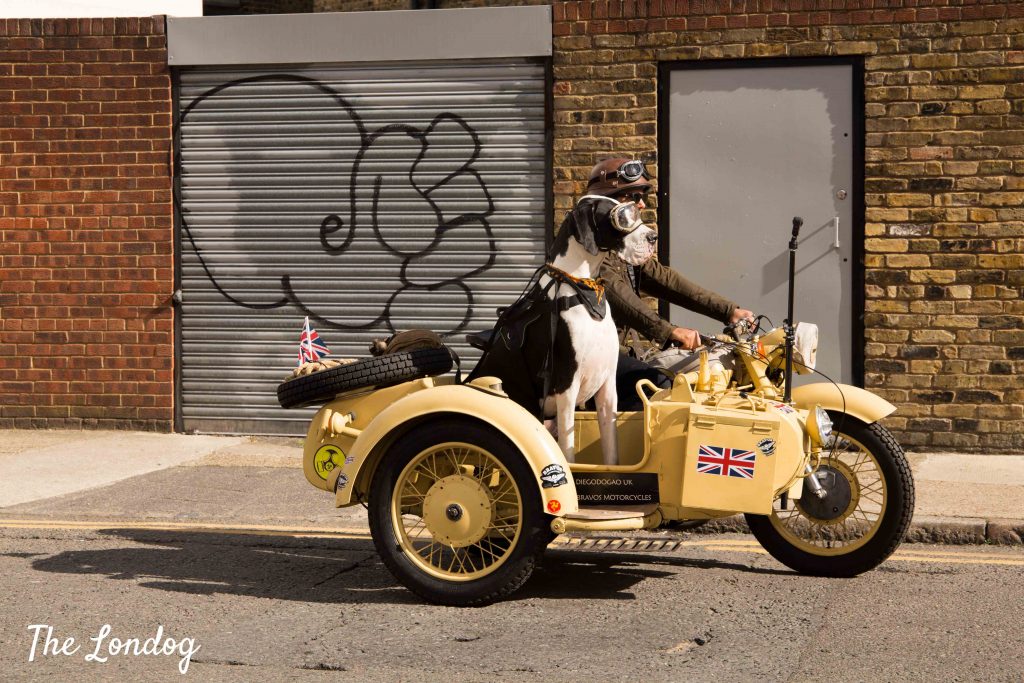 Among the last things you’d expect to see while out an about there is probably a Great Dane riding a sidecar in London, with big googles, proud pose, ears flapping in the wind, gazing around while the sidecar takes a street turn. Well, think again. Great Dane Diego and his human Carlos are taking on the streets of Shoreditch (and further) on a vintage former Russian military sidecar, charming bystanders. Today we are very excited to bring you his story – as you have never read it anywhere yet, though he’s on the route for stardom! 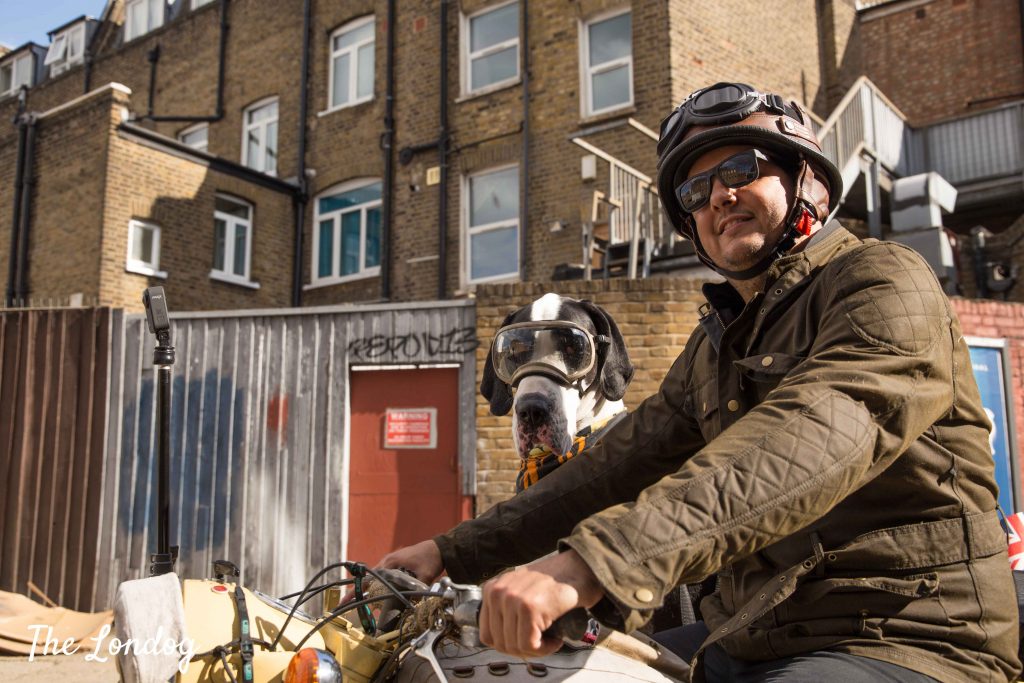 Last year we talked about riding a sidecar with a dog (a dream activity on my own bucket list for Argo) and about the documentary “Sit Stay Ride: The Story of America’s Sidecar Dogs” that, as the title suggests, tells the stories of lovely dogs scouring America on board of a sidecar with their humans. When a friend told me that a Great Dane was spotted riding a sidecar in the UK, and more precisely in London, I was very excited about it, and even more when I realised that I had previously met and connected with the dog and his owner in question, with Argo! 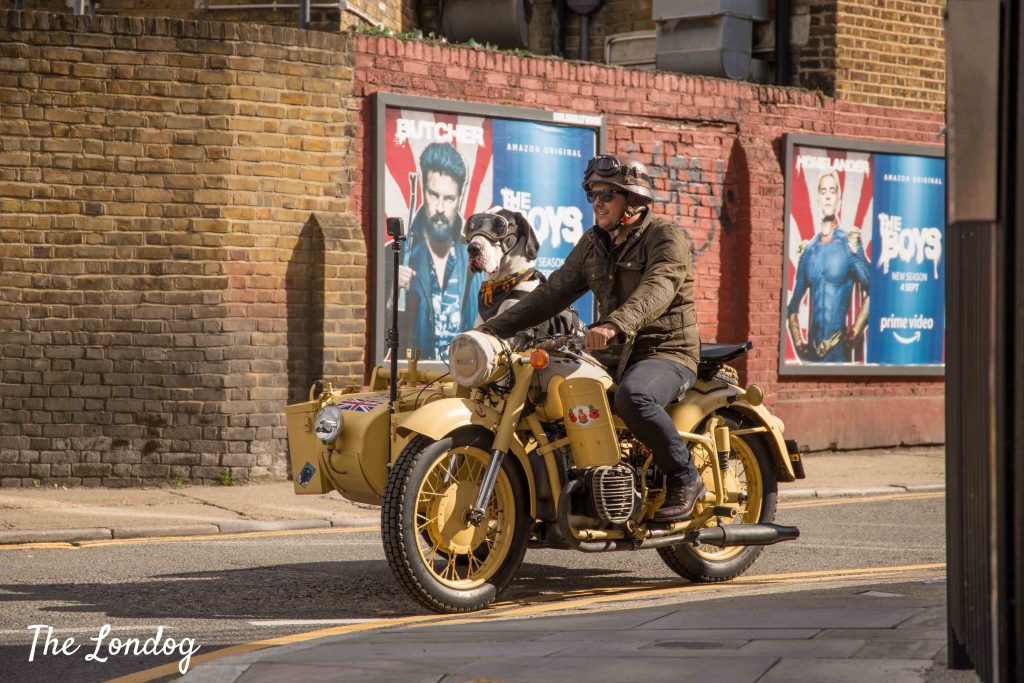 Diego (or Diego “Dogao”, Portuguese for “big dog” in honour of his humans’ Brazilian origins!) with his 85 kilos and 95 cm circa (3.12 feet) at the shoulder, and about 2 meters (6.56 feet) standing, is a dog that doesn’t go unnoticed. Even more when he rides the sidecar.

He travels on the trike on the side of his human Carlos at least four times a week, loving sunny days but insisting on taking other means of transportation on rainy ones – “Great Dane thing,” explains Carlos.  Diego is very calm, friendly and lazy, a real gentle giant. “He loves everyone who pets him. As soon you start, he will start leaning on you and find a position to seat on your lap. He loves food and the problem is that he can reach any part of the table. Not very easy to control,” says Carlos. 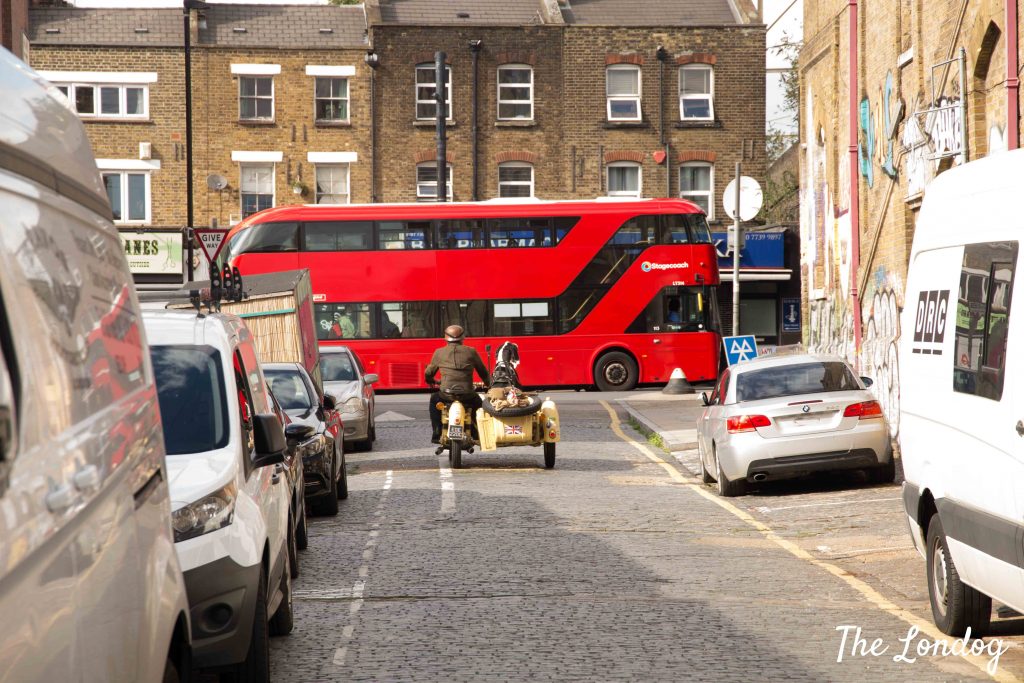 Leaning on people and trying to sit on their lap is another very Great Dane thing. In fact, Diego’s brother in arms, 9-month old Great Dane pup Nelson – with his 65 kilos of lightness -, has the exact same habit, as I experience first person when visiting Bravos Motorcycles, the garage where they both work. As I bend to photograph Diego, Nelson tries to sit on me, and I almost lose my balance. It’s quite endearing to see how little self-awareness of their weight these gentle giants seem to have and how much they love physical contact!

Training Diego the Great Dane dog to ride the sidecar 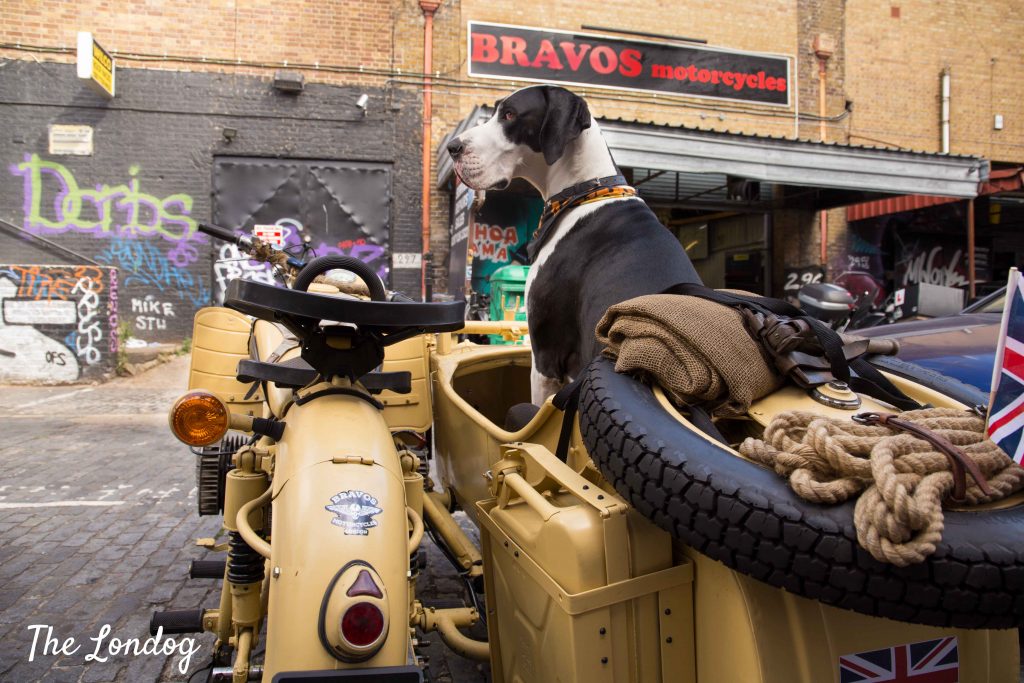 Start them early, they say. And Carlos started training Diego since he bought his vintage sidecar, a few years ago, when Diego was still a big pup. The first step was getting him used to getting on and off the sidecar with the help of treats, while parked on the road. This was apparently an easy task. “Dogs are very clever, especially when you reward them with treats,” giggles Carlos. “Then he felt the wind on his face and ears and he loved it,” he continues; that was all he really needed to become very excited about every motorcycle adventure.

He is so much into riding that, as soon as he hears the motorcycle starting to rumble, he runs to the door in anticipation of the next trip. But even just hearing Carlos getting the keys of the trike triggers his fast response. Carlos tells me an anecdote about that: he once lent his sidecar to someone for a test run and Diego, thinking that he was being left behind, ran after the sidecar on the streets of East London! It was a scare for Carlos, but luckily Diego was found safe and sound soon after. 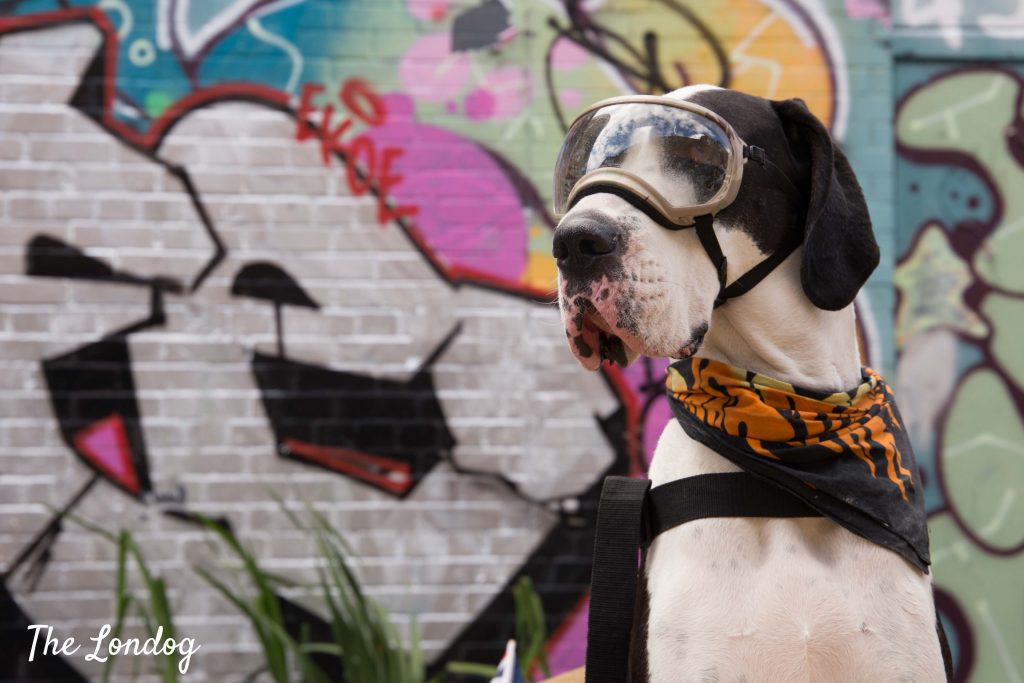 Diego with his Doggles (dog goggles) and harness, getting ready for his sidecar ride

Safety is front mind for Carlos when riding with Diego, and so he has thought of everything: Diego has his own Doggles (dog goggles protecting his eyes from the wind), ordered directly from the US, and when riding wears a harness with a number of leashes that secure him to the sidecar. Carlos also ensures that they never go too far:  “There is plenty room for him but we really take care so he does not get tired of the position that he needs to stay,” he explains.

A sidecar dog’s life in London 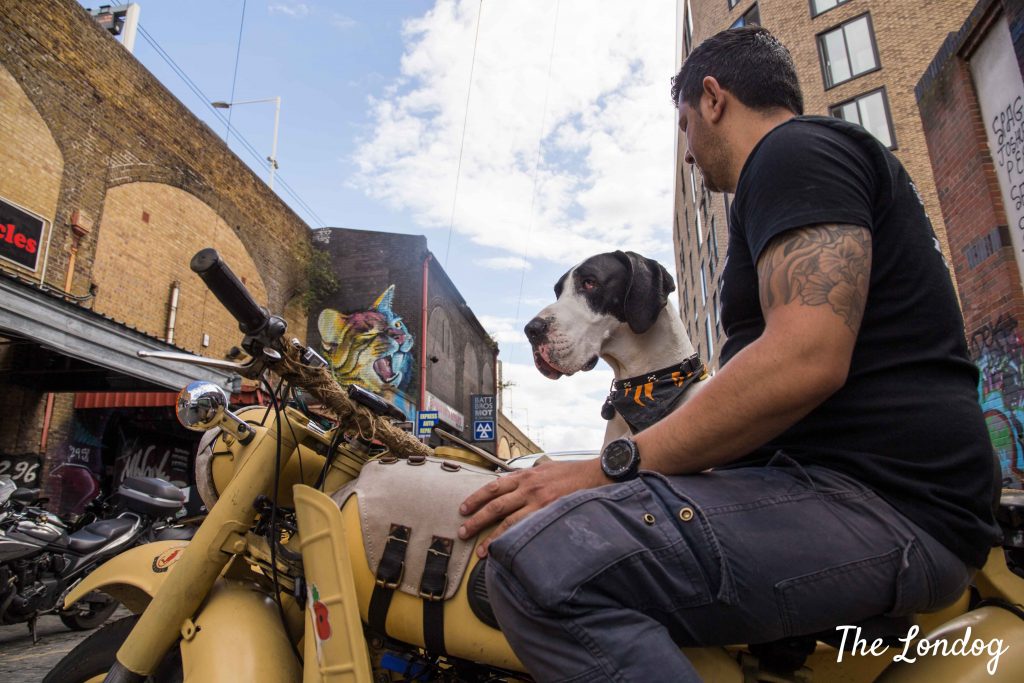 At five years of age, Diego has been working full time as garage dog at Bravos Motorcycles in Bethnal Green (watch out for a later feature in our Office Dog Series) for over a year and a half, after taking great care of Carlos’ wife during a long illness. All customers adore him and he is the mascot of the place.

Living in North London and working in East London means that Diego’s commute involves a fair amount of daily travel on the sidecar – a much nicer alternative than being crammed on a packed tube. This also cheers up onlookers going to work: even just in the timeframe when we meet for a photoshoot, so many heads turn and people smile as they see him passing by, in his serious biker attire! 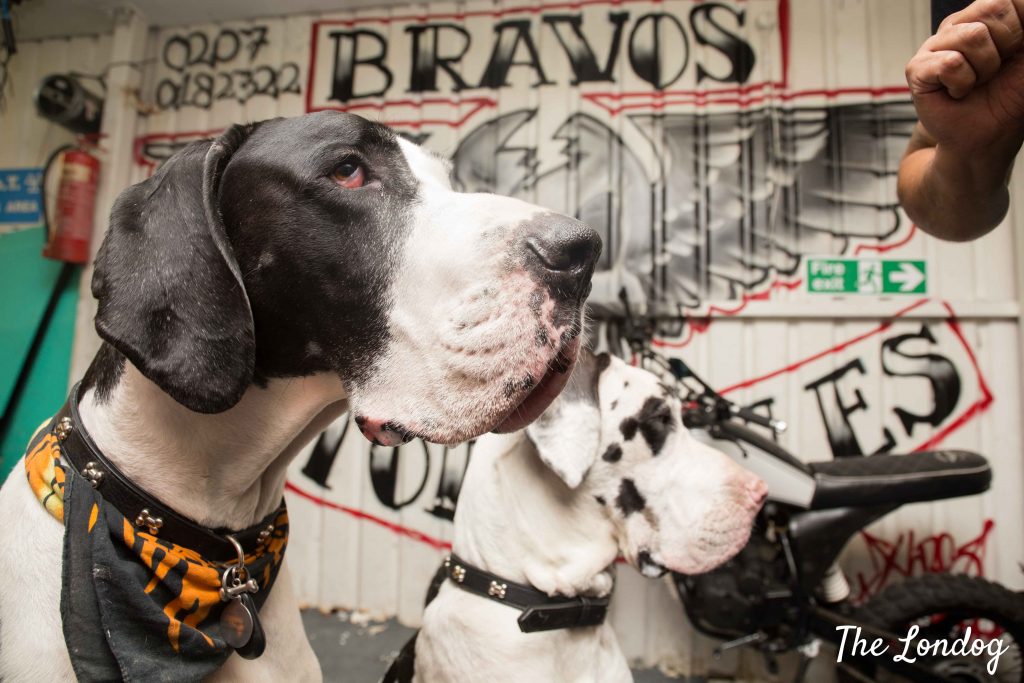 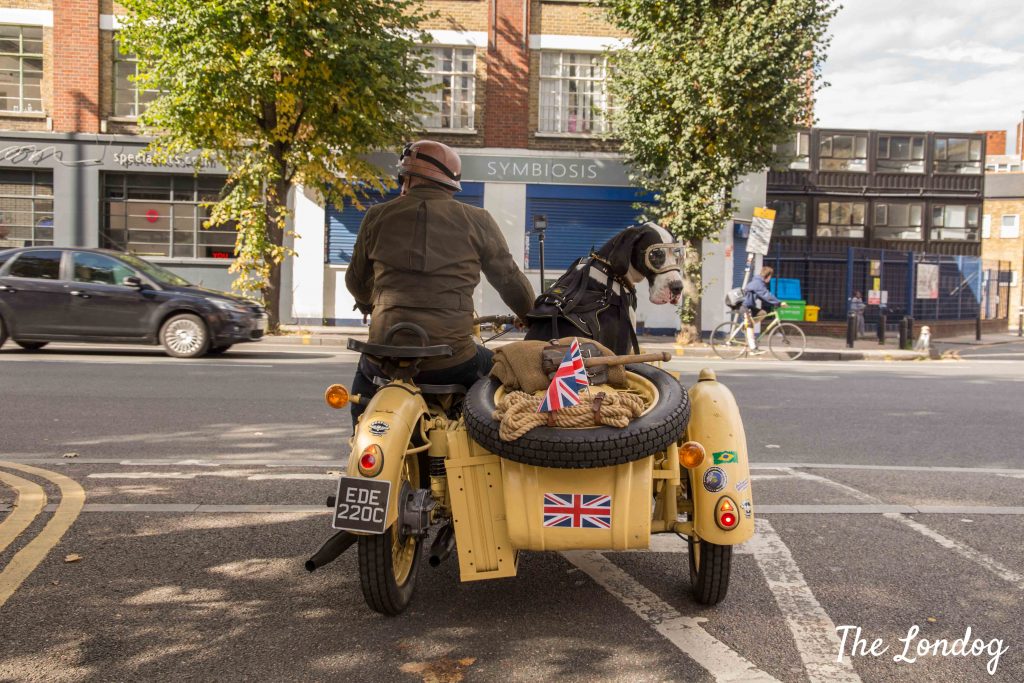 On their list of favourite leisure destinations when riding there are the dog-friendly biker venues Ace Cafe London in Wembley and the Bike Shed in Shoreditch – paces from where I used to work -, where – to no surprise – Diego is something of a star. They also occasionally attend vintage motorcycles rallies, but to keep Diego comfortable they don’t travel far with him on the sidecar.

Nelson has not yet started training for riding the sidecar, as he is a very active pup, but with time and more control, Carlos is planning to teach him too. Will his wife need a new sidecar to ride together, then? More will follow! 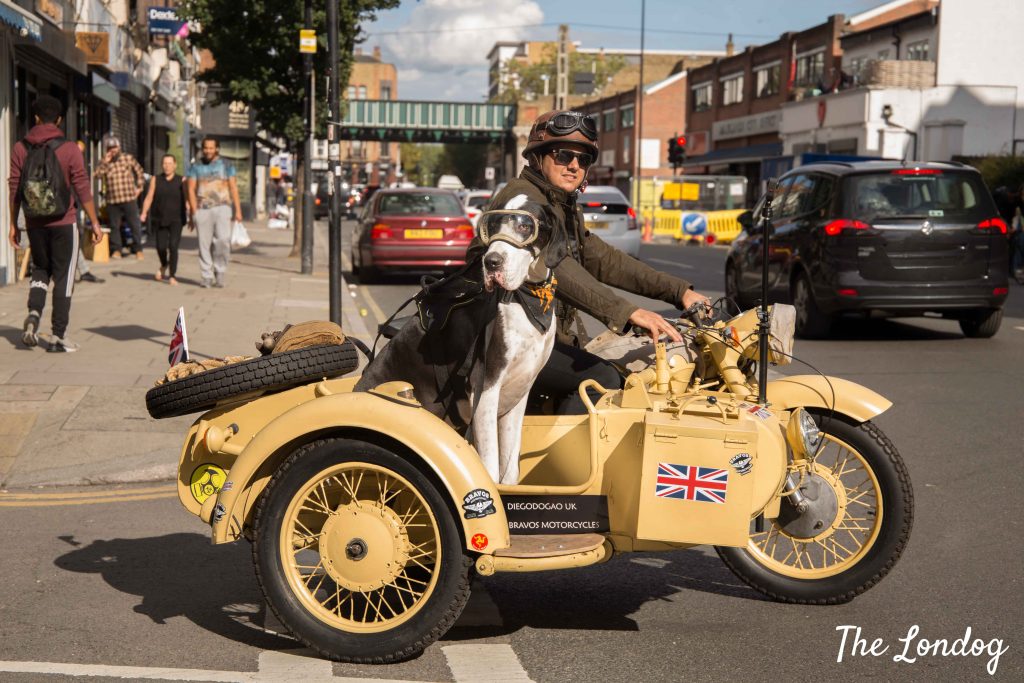 In the meantime, Carlos told me that after our interview and photoshoot, Channel 4 contacted them to film a documentary, so they are going to be on TV soon, which will be probably the first of many! To see what they get up to, you really need to follow Diego’s Instagram account @diegodogaouk.

We will tell you more about Diego and Nelson in the next edition of the Office Dog Series. 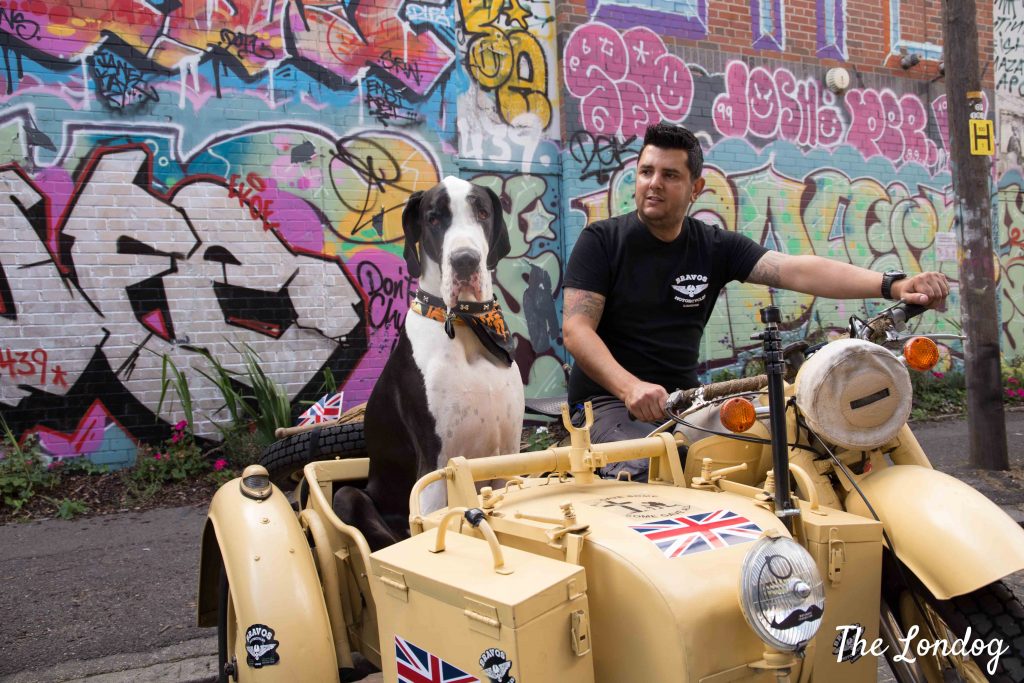 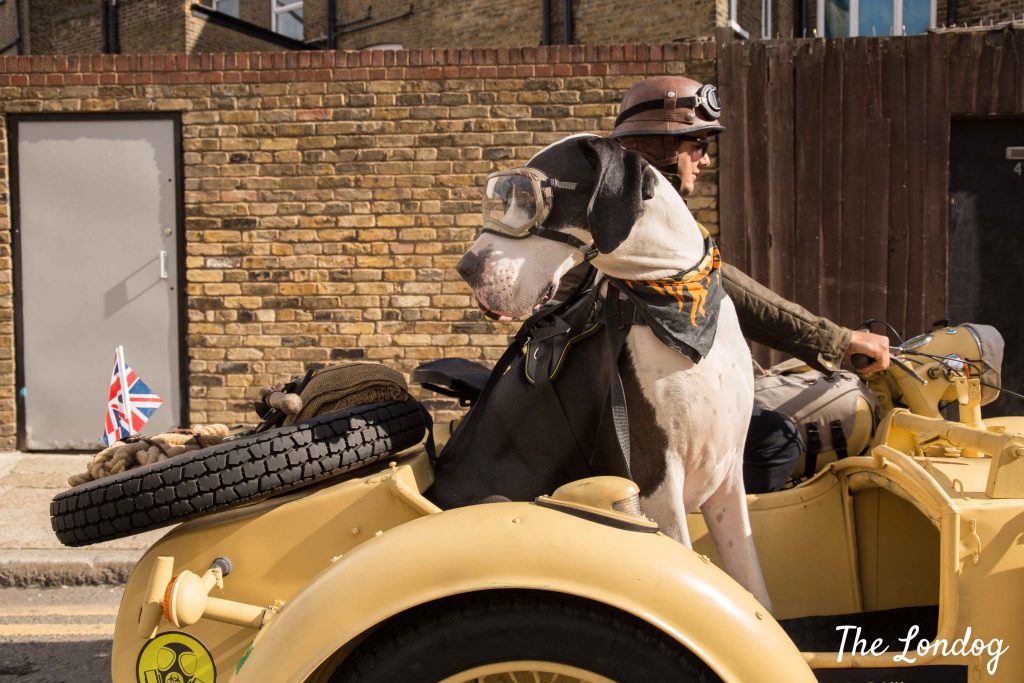 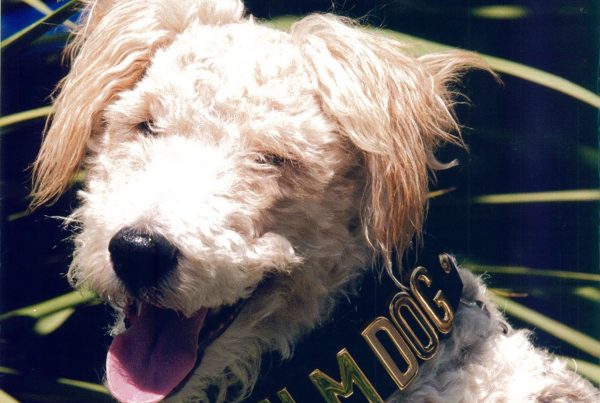