Story of a graphic designer and his studio dog 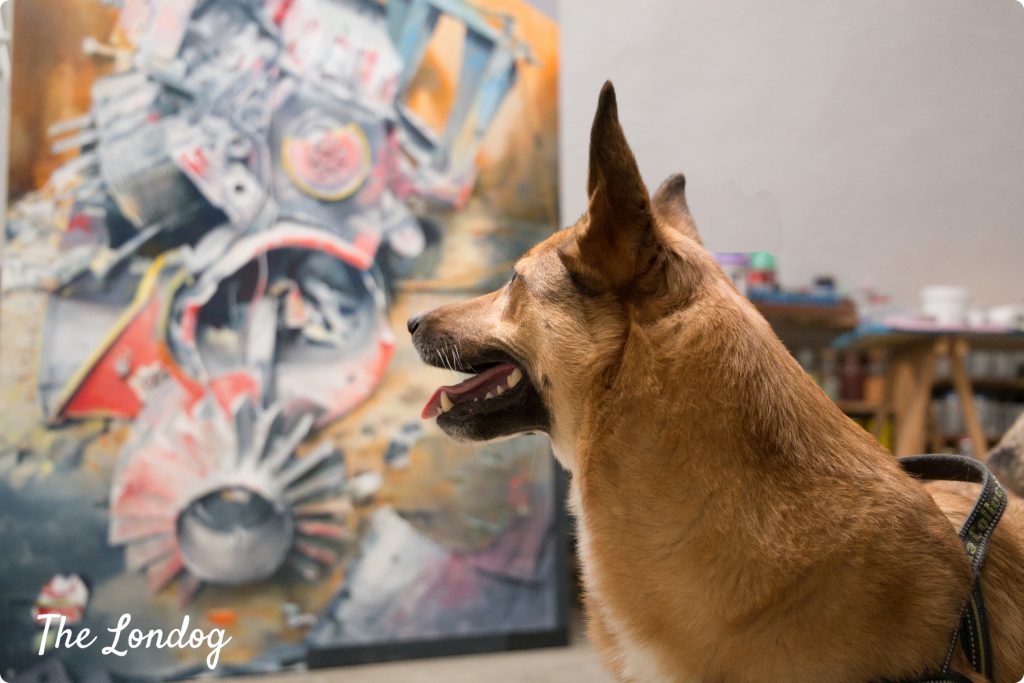 To tell you how this story begins we need to start far from London, over the sea, in a town that writer Jan Morris juxtaposed to the ‘meaning of nowhere’: Triest. A 250,000 inhabitants seaside city in the very North-East of Italy, which is known for its annual regatta and its gelid winter wind. The city where graphic designer and painter Davide Comelli of Chromosome Studio (who signs his works as Zoneone72) and his studio dog Lea, a seven-year old mutt, live and work. 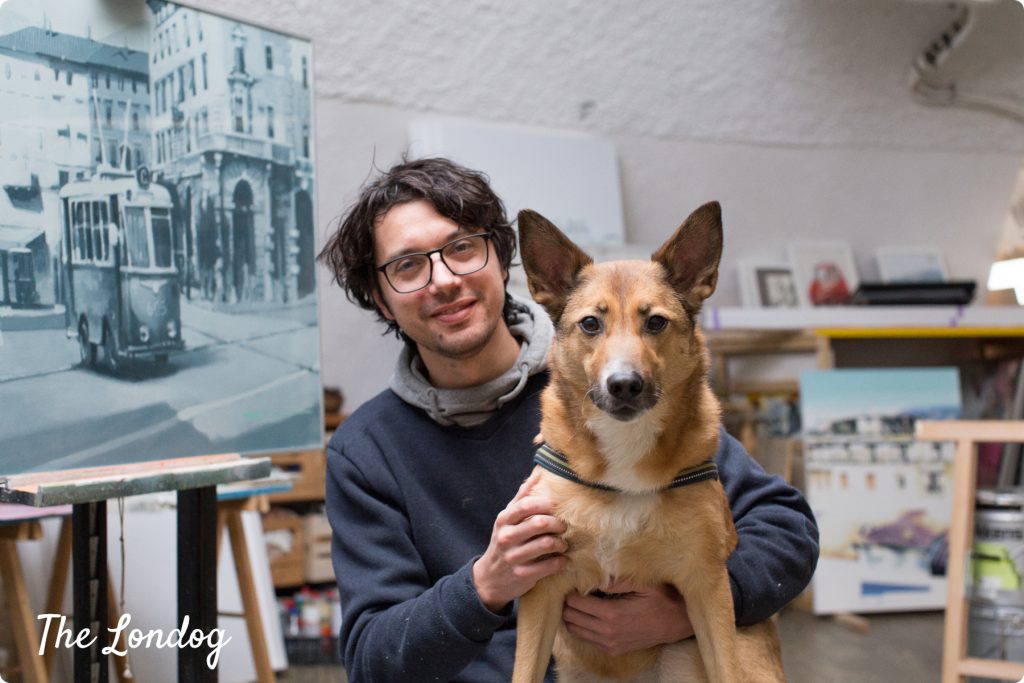 We met Davide at his tidy and spacious studio, located in an attic on the top of a council building in the outskirts of Triest. From the rooftop of the building you can spot the industrial area by the sea – with the old factory and its polluting fumes – but as soon as you enter Davide’s studio the atmosphere drastically changes. A large skylight diffuses a soft light in the ambience, touching brushes, paints, sprays, easels and paintings, all orderly kept.

Lea the mongrel and Joy the Maltese cross come trotting to say hi. Joy, who belongs to Davide’s father, is a very confident and cheeky dog, who demands to be petted and tries to lick you at all times, while Lea is a bit more shy and keeps her distance, in the beginning.

You may wonder why we bring you so far, this time. Davide has a studio dog, yes – and this would be already a very good reason to tell you about their story! – but there is a deeper link to our blog: Davide is the designer of The Londog’s logo!

Life of a designer and his dog 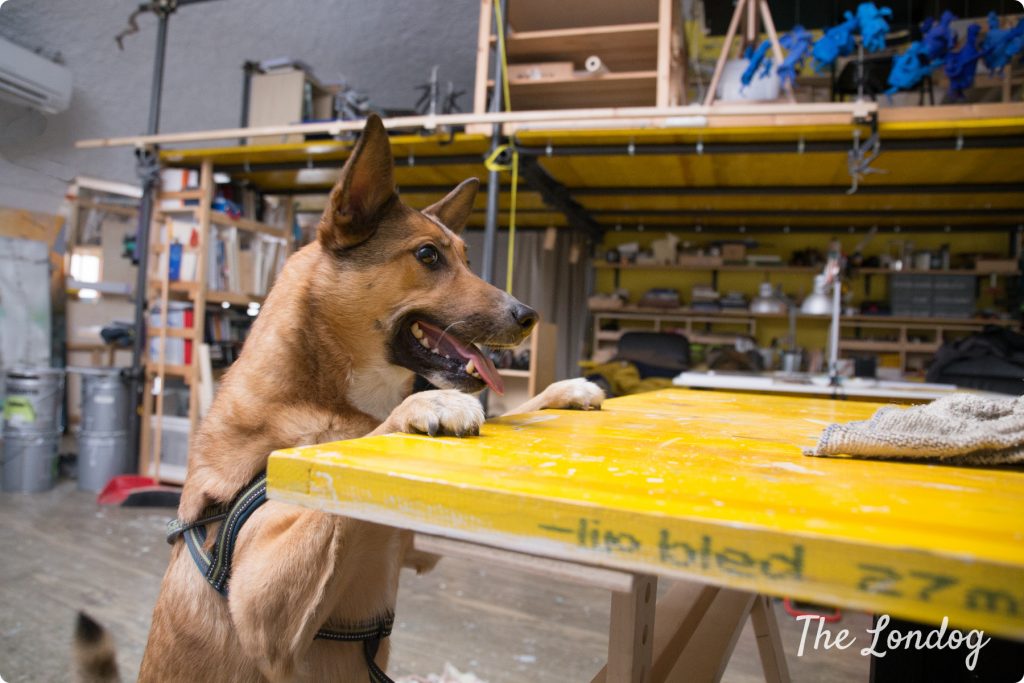 One could say that Davide has art in his blood. Son of an art professor, with an older sister who works as an illustrator, Davide has been around pencils and brushes since he was a kid. During his high school years he developed a very strong interest for murals, which ultimately led him to enjoy commissions involving the design and decoration of large indoor and outdoor surfaces and spaces.

He is an eclectic artist and in his studio you can find paintings, pencil and ink drawings and spray works of any dimension, but his favourite jobs are still those that involve “designing in space”. He worked to decorate walls of stores, restaurants, hotels, parking spaces, private houses across Europe and even a huge outdoor wall of a council house in Triest. “The thing that I love the most are mural and, more generally, painting on a large scale. I love to think about the art work as placed in space and having the chance to transform space through colour and drawing, giving it new character and personality. For this reason, I find that the most rewarding assignments so far have been those where I could express this passion of mine and involved a pictorial intervention on wall”.

As we leaf through his albums that contain hundreds of drawings, doodles, photographs and studies for paintings and walls, my attention is caught by some dog and animal sketches. “Animals, and dogs in particular, have always had a relevant role in my work”, says Davide. “I find them a very interesting subject due to their likeness with certain human behaviours and attitudes. For a number of reasons, I have often included them in projects I have worked on and, when I draw for pleasure, they are often a subject I turn to”, he adds. 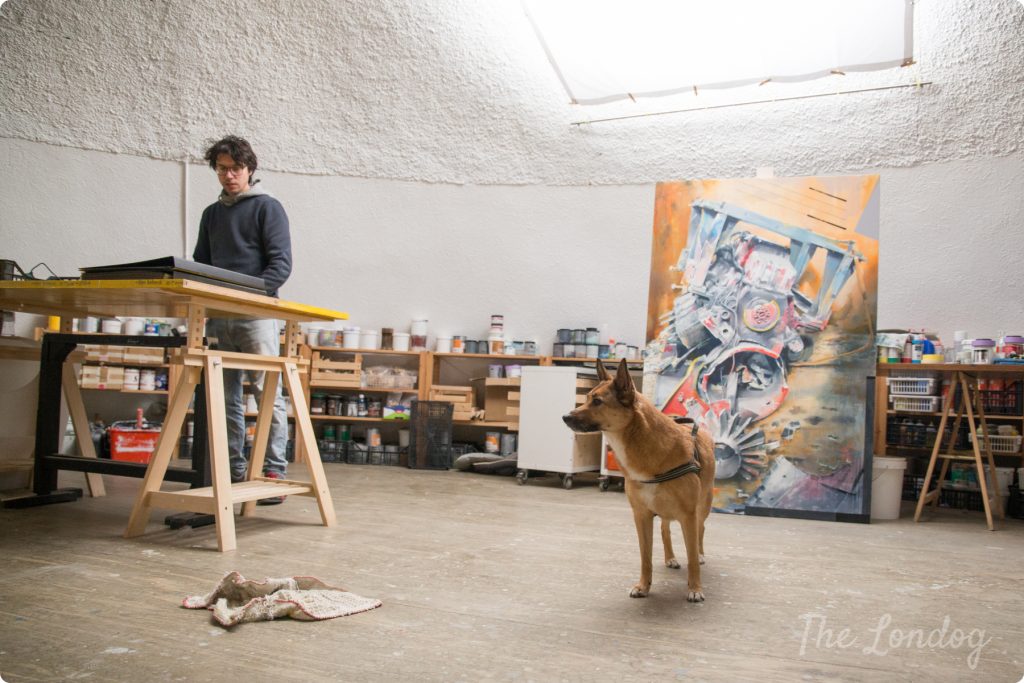 Lea the mongrel, was adopted by his partner Dajana as a puppy coming from an unwanted litter. “Lea and Dajana live almost in symbiosis”, notes Davide. “I often wonder how, even if I became part of Lea’s life when she was already five years old, we developed such a close relationship”.

At times she joins Davide at the studio for the day. Lea doesn’t come in at the studio on a daily basis, partly because she happily takes on the role of office dog at Dajana’s accountancy office for the rest of the week and partly because – as Davide explains – his studio can get quite dirty/dusty and unsuitable for a dog when he is working on certain projects.

“The studio space is very large and bright, so Lea has the chance to run around and play. Having a work companion is something I very much appreciate and I have the impression that she enjoys coming in to the strange playground that is my studio too”, adds Davide. 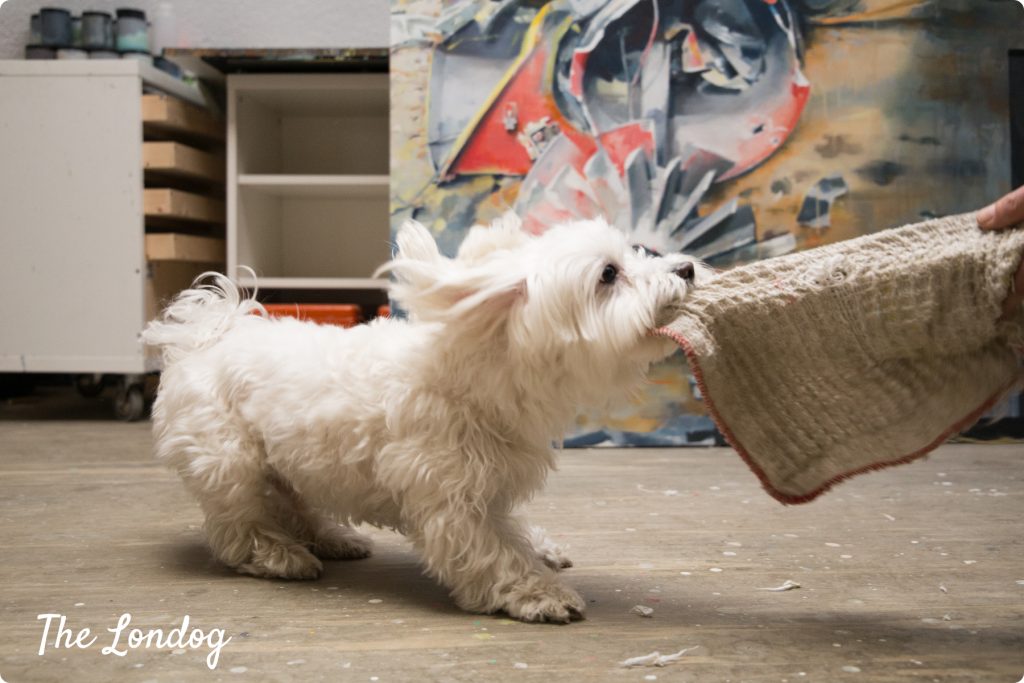 Davide and The Londog’s logo

Even before starting to think about a logo for the The Londog blog, in my mind Davide was the one. I had always adored his work, his attention for composition, geometry, harmony and his artistic vein. I knew that he would have done an awesome job in designing a logo that was not boring and commonplace, but original, fresh and recognisable, so I was over the moon when he agreed to do it. And certainly I wasn’t disappointed.

“The idea behind the design was an independent and happy dog, with a touch of irony”, explains Davide. “The font I designed for the logo is inspired to the one of the London underground, which adds a subtle link to London”. 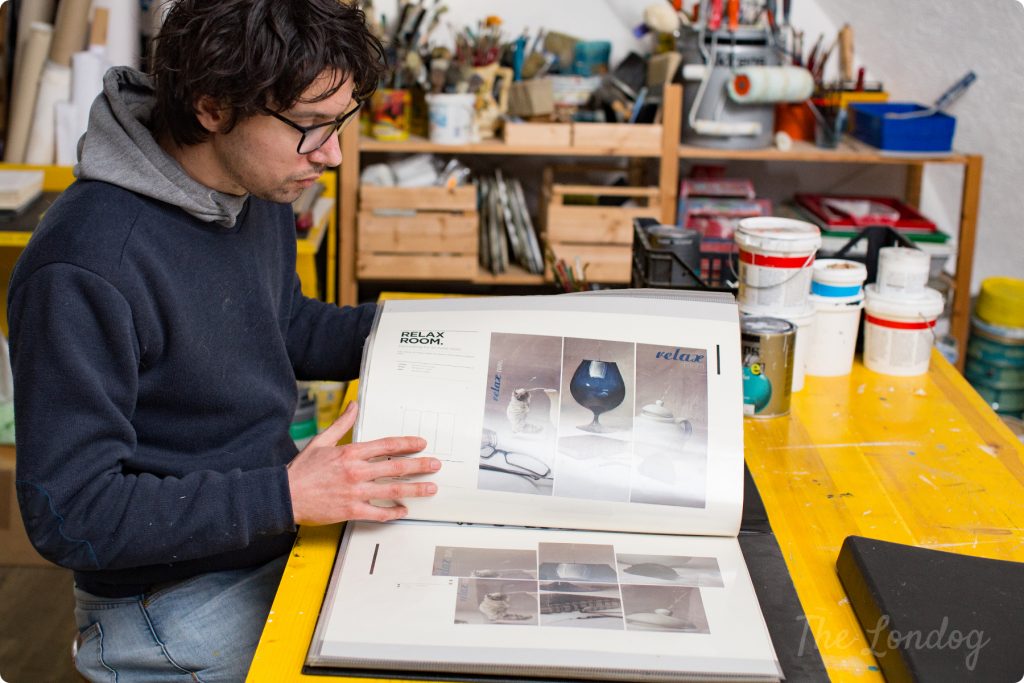 When I first met him, over ten years ago, Davide had just graduated in Graphic Design at the ISIA in Urbino and was showing the incredible art-piece he had prepared for his thesis. This consisted in two almost identical paintings depicting a dead nature: when placed one next to the other and looked through two mirrors, a three-dimensional image would appear (for a stereometry mechanism).

Shortly after, Davide left to live and work all around Europe: in Barcelona for two years, then in Berlin, before spending almost three years in Paris collaborating with his sister Sara at Chromosome Studio. The need for a larger studio and the constrictions that a big city imposes in terms of affordable spaces, nudged him to return to his hometown, Triest, where he has been until today. But he is thinking about another international challenge. I am not sure he will be coming to London any time soon, but for sure he would love street art and the vibrant artistic landscape here!

Davide’s goal for the future is to keep experimenting with regards to pictorial elements, as well as to continue working closely with architectural studios that see his work’s potential for their projects. “I very much enjoy collaborations with professionals with whom it is possible to create synergy”, says Davide. “My goal would be make people understand that drawing, mural and painting can be considered an element that belongs to and dialogues with both the urban landscape and private space. My dream would be to see pictorial elements being included in the planning of public spaces as an essential part, and being given equal dignity to architectural elements.” 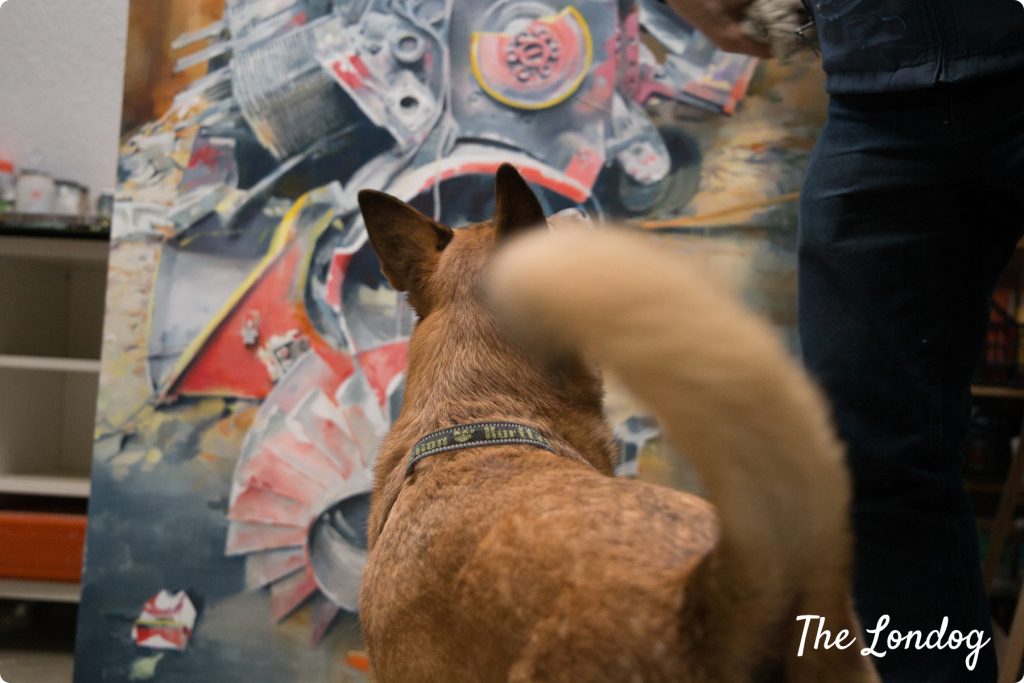