A CSI course for dogs (with murder, fun & mystery) is coming to Kent 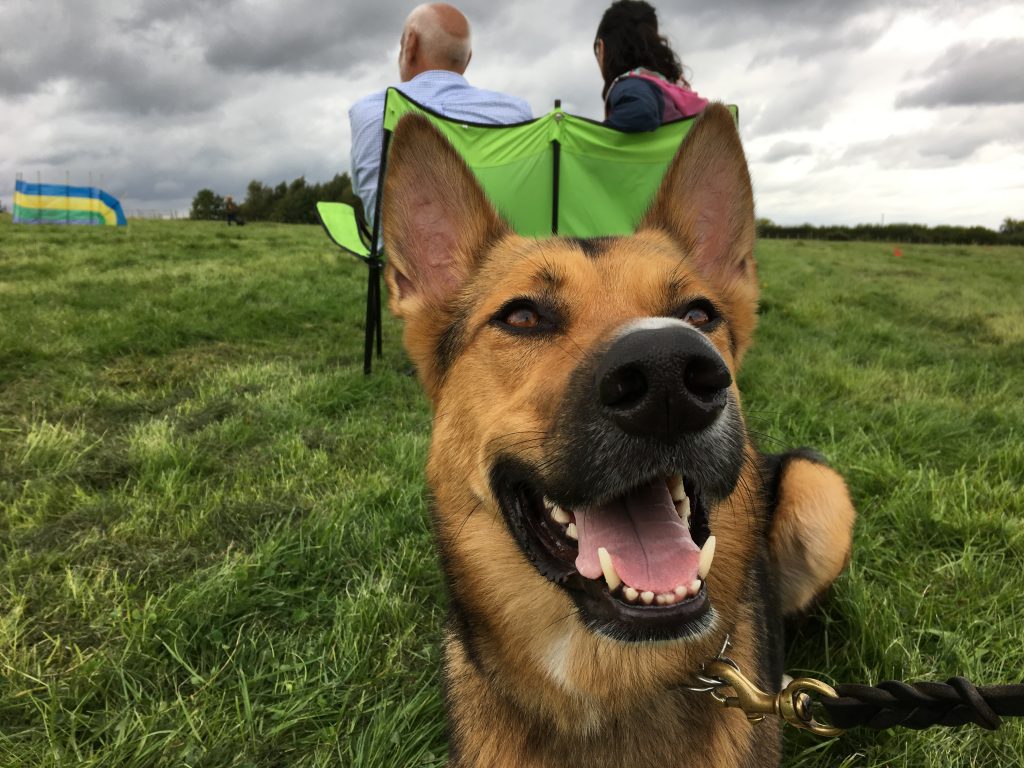 If you are into training your dog, like to keep him/her mentally stimulated and want to spend an original and fun weekend this one is for you. There is a 2-day CSI course (subtitled “Murder, Fun, Mystery & Your Dog”) held by reknown dog trainer and behaviourist John Rogerson, coming to Kent in just two weeks! And only a couple of spots left.

After last year’s Rally Working Trials 2-day workshop (about which I will tell you more below in this post), this year, dog training school Family Dog Services is organising another workshop weekend with John Rogerson, internationally known trainer and behaviourist, founder and principal lecturer of the Northern Centre for Canine Behaviour.

The course, which will run on 1st and 2nd September, will be about “crime scene investigation” for dogs, (which is not intended for law enforcement officers, but) conceived as a fun mystery course. The aim is to teach you how to put your dog’s senses at work and train him/her to solve a crime. According to the course description, the workshop will involve learning handling and observation skills, as well as how to train a dog to do many of the following: 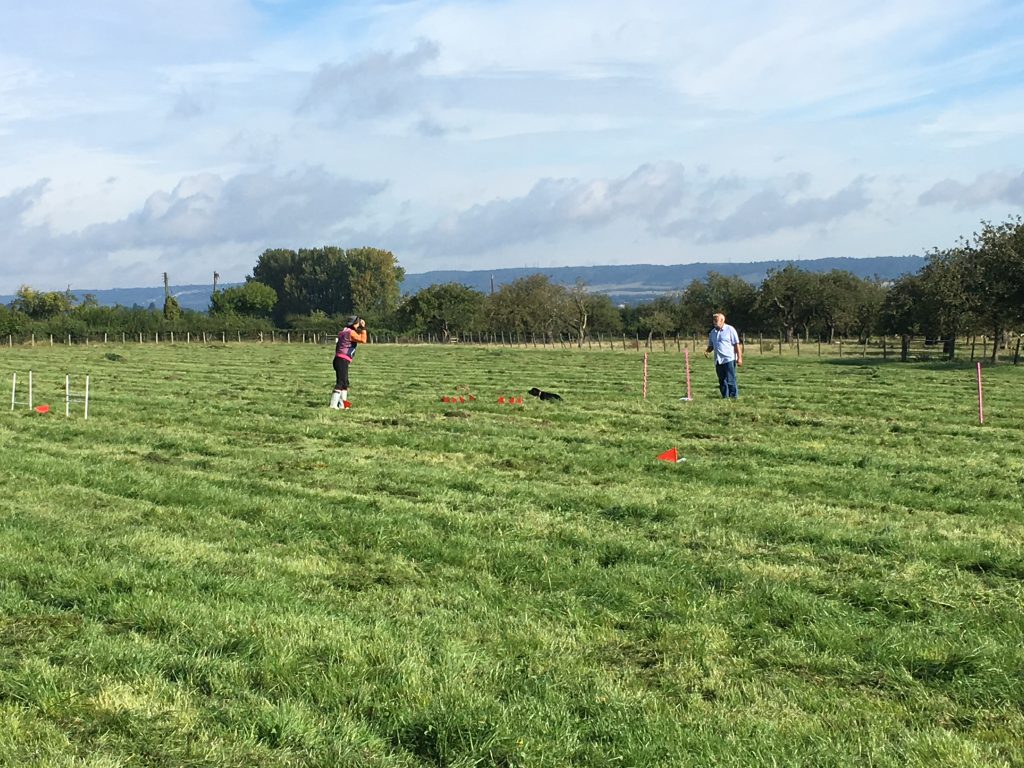 While the first day is concerned with training dogs to carry out all of the above exercises, on the second “you will work with a team to try and solve a murder mystery using all of the canine skills that you and your chosen dog will have learned on the course.”

The reason why I would warmly recommend it is because I had experience of another fun workshop by John Rogerson, last September, and totally loved it! Back then, Argo and I headed for his Rally Working Trials training weekend, and it was one of the funniest experiences we have tried so far. Below I am going to tell you about it, so you can get a flavour of John’s methods ahead of the CSI course.

What is Rally Working Trials

Rally Working Trials is a fairly recent discipline which is a twist of the dogs sport known as Working Trials. The latter “came out of military exercises and early competitions were held in Hyde Park and judged from horseback. The results appeared in the Sunday Times and early trials the dogs ability to track, jump and be generally obedient to the handler”, recounts John.

After competing in Working Trials for nearly 30 years, John noted that despite the initial success of the discipline, competitions had seen a sharp decline over the years, mainly because of costs (in terms of travelling, entry fees and overnight accomodation) and in consideration of the exercises being outdated and having failed to keep up with the times. So he had the idea to invent a new discipline that would take from working trials, but make it more fun and practical for handlers, and Rally Working Trials came a few years ago.

John Rogerson says, “Rally Working Trials has been born, pioneered by a group of hardy dog enthusiasts in a remote field near an equestrian centre in bonny Scotland, where many handlers braved the weather and introduced the world to a new fun way to train a dog and even get a title.” Since then, Rally Working Trials competions have been run all over the country and also in the USA and China. 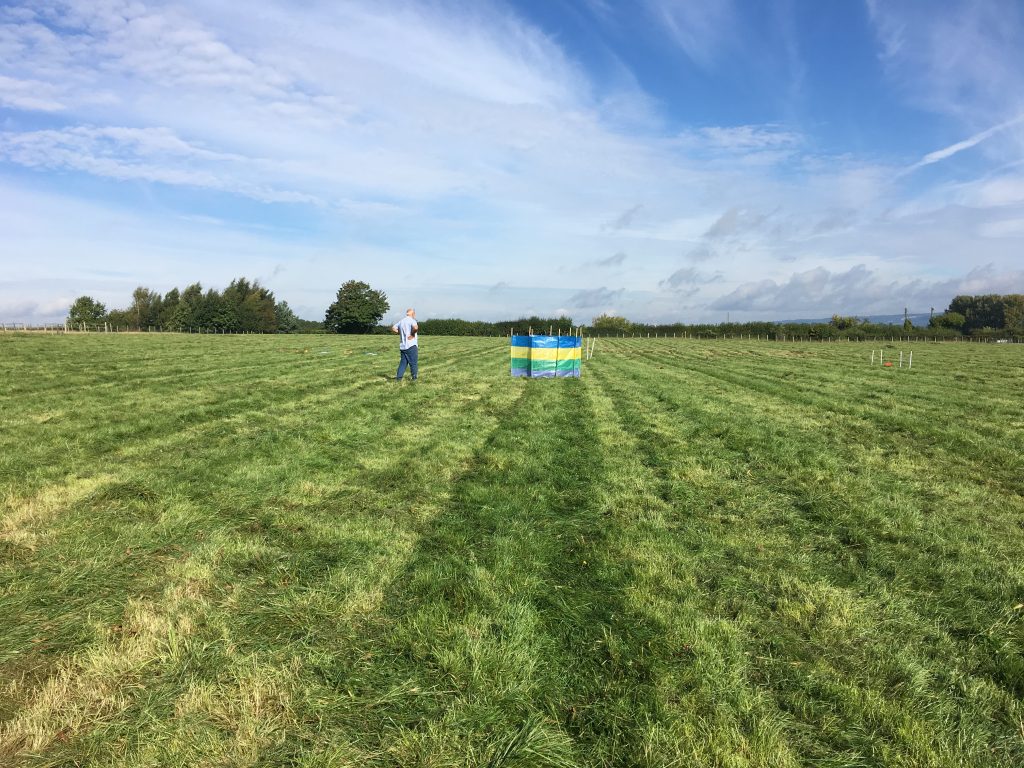 As we were able to experiment on the course, Rally Working Trial consists of very practical and useful exercises, which can have loads of unpredictable and rather hilarious variations.

“We included elements from several types of working trials and even obedience exercises but in a new format which is similar in style to rally obedience but there is the world of difference”, says John. “We look at the three sections of working trials and come up with new exercises based on the handlers control of the dog, the dogs ability to use its nose to find something that the owner has dropped and look at the dogs ability to jump over small hurdles”, said John. The competition has three levels: Bronze, Silver and Gold. Each of the three levels adds to the skill level required from both dog and handler.

Some examples? On the weekend course, after training Argo and I had to undertake the competition. Just to mention a couple of exercises, one involved me being chained to a camping chair with a lock in a hideaway and having to recall Argo out of sight to grab the key attached to his collar (the penalty for not being able to do so would have been going through the rest of the test chained to the chair); another consisted in throwing both shoes in opposite directions and asking Argo to retrieve them or do the rest of the round only wearing socks. I was very pleased that we managed to complete these two tests successfully and I didn’t have to run without shoes while attached to a chair! 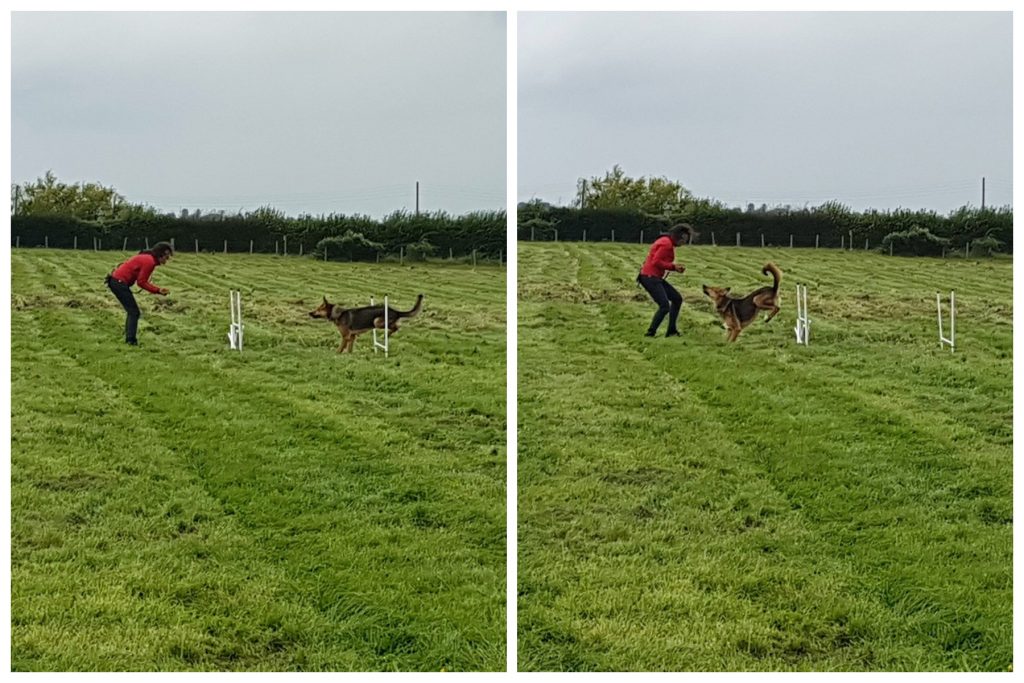 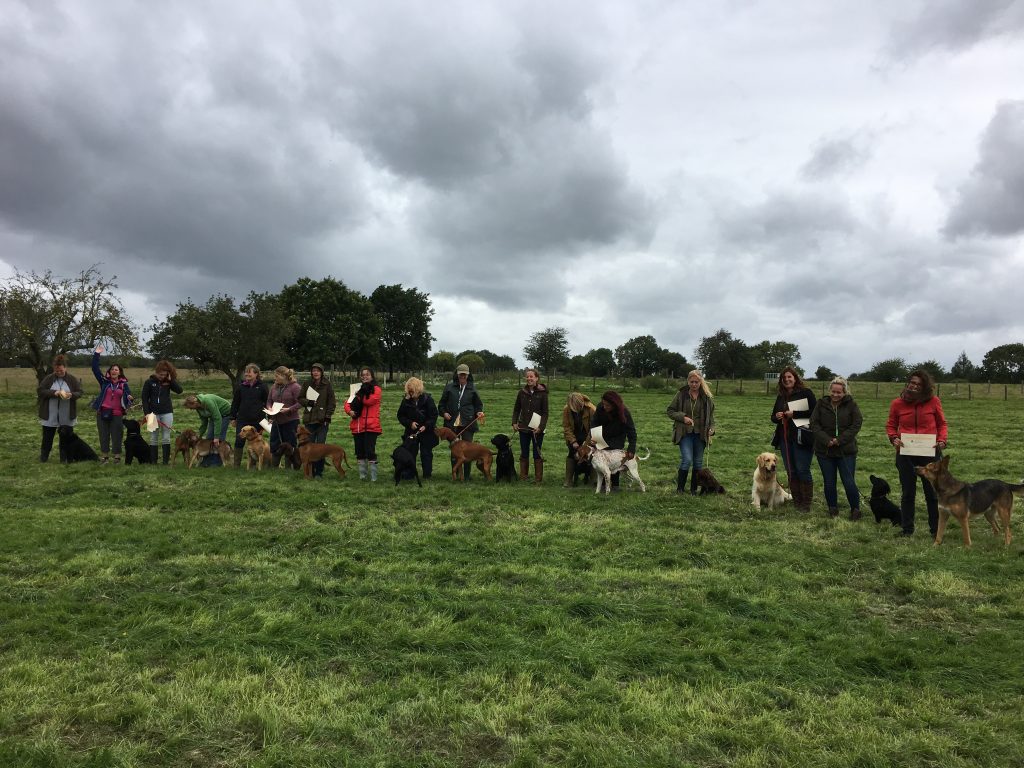 Another example of an exercise, recounted by John, can be holding a cup of water while walking your dog for 100 yards. “At the second Rally Working Trials event in Wisconsin, we replaced heelwork by asking the handler to hold a cup of water in the hand that they held the dogs lead in and walk 100 yards along the road. The marks that they obtained were in proportion to how much water they had left in the cup. This was for the Bronze level. For the Silver level the same exercise but with TWO full cups of water, both held in the same hand as the lead. At the end of this section the handler had to place one cup on the ground and empty the other cup into the one on the ground. If the water overflowed then you got the full ten points available. If the cup did not overflow then you got no points at all”, he says.

At the course we got the Bronze Certificate! We tried the Silver one, but I made the silly mistake of training Argo to retrieve the hotel cardboard holder in the morning, so when we got to the exercise of retreiving a random object dropped, he got confused and tried to retrieve one of the flags marking the round instead. Anyway, we had so much fun and so many good laughs!

This year we won’t make it to the CSI course unfortunately, but I can’t wait to hear the stories of who will go and wait for another course next year. 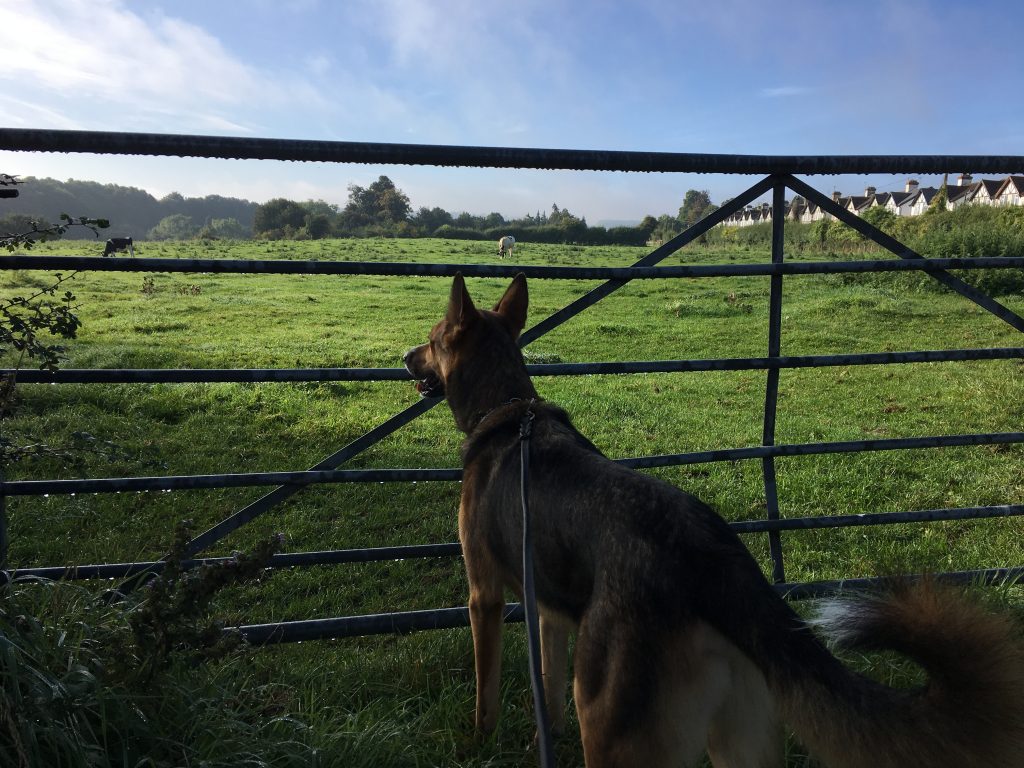 On the way to Tovil

When and where. 1st-2nd September 2018, Tovil, Kent. Starting 9.30am, until around 4pm on both days. For further information about  the course you can have a read at the event page here.

How to book. There are still a couple of spots left for the CSI course, taking place on . So if you are interested get in touch with John and Claire from Family Dog Services at john (at) familydogservices.co.uk.

Accomodation. If you look for a dog-friendly hotel nearby there is Travelodge in Maidstone (affiliate link), where we stayed at last year: not too far, but a bit of a walk on foot.

Getting there. The training field is easily reachable if you have a car. If, like me, you don’t, you can still travel by public transport to get to Tovil, although there is a bit of a walk. From London it takes about 2 hours and a half. You will have to get a train from Charing Cross station to Tonbridge, changing then with another train to East Farleigh, followed by a 35 minutes walk in the narrow countryside roads of Kent to destination. It is a pleasant walk (uphill) if it is not raining. We did it last year for two workshops and brought a hand bag for the two days with a mini foldable stool (which you will need!).