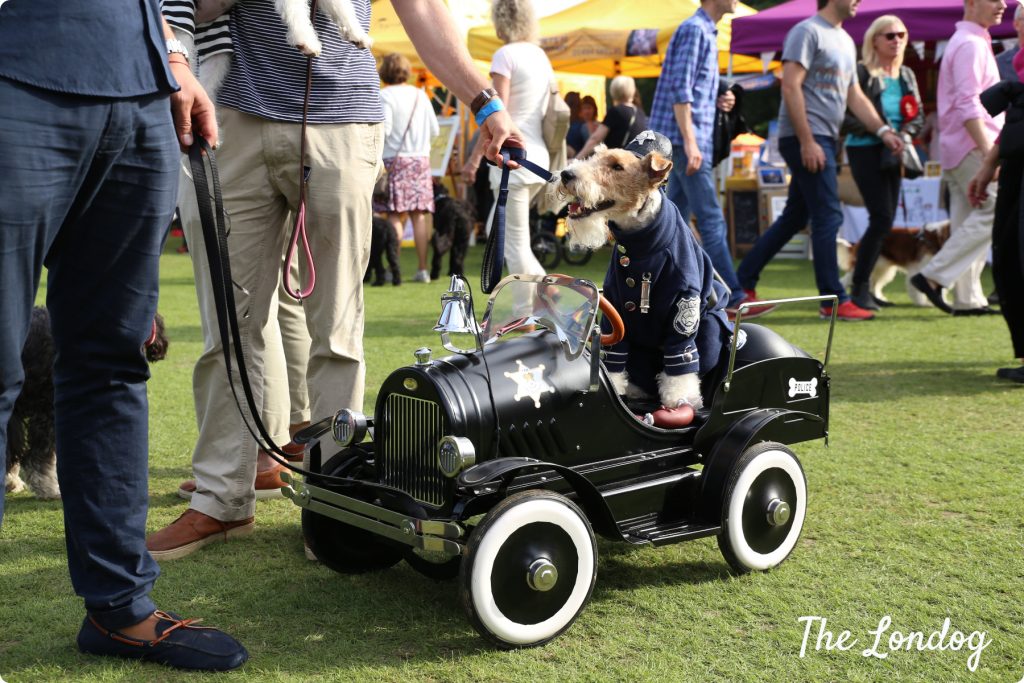 The 2017 edition of the Chiswick House Dog Show was held on Sunday 24th September and was a great success! To celebrate the 130th anniversary of the publication of the first Sherlock Holmes story by Conan Doyle, the theme of the show was inspired to the world of detectives (and Sherlock Bones). Comperes wore deerstalker caps and the fancy dress category was entered by many dog detectives!

Having had a wonderful time at last year’s show, we were very much looking forward to this date! Even more excitingly, this time we had been asked to volunteer as photographers and we were very excited to help out, being part of the over 150 volunteers that contribute making the Chiswick House Dog Show possible. 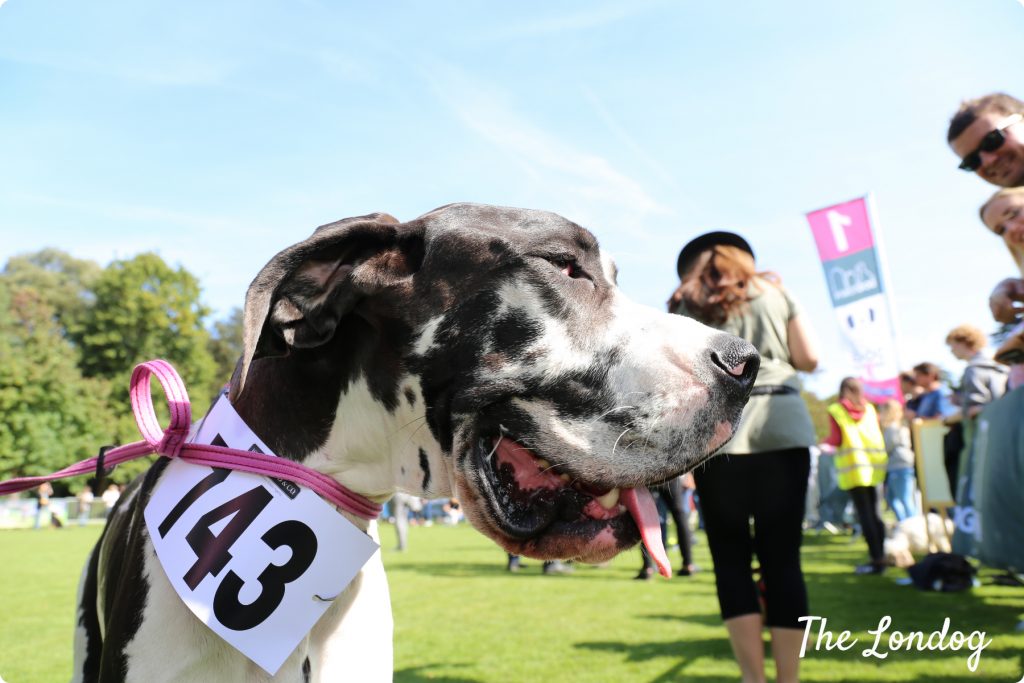 The class schedule was very rich, with three classes running in different rings at the same time, so everyone could find their thing! Add all the many great stalls, BBQ, and dog demonstrations: it was the perfect day for families and friends. And the sun blessed the show too!

Photographing the show was a fantastic and very fun experience – plus no need to go to the gym after five hours of squats to take photos! -. We photographed the Flyball Demonstration, Waggiest Tail, Best Rescue, Prettiest Bitch, Naughtiest Dog, Fancy Dress, My Dog’s Got Talent and Best in Show in about 1,500 photos! The dogs were just incredible and we fell in love with so many of them.

A Dog Digest from the Show

So this is a mini digest of what we loved from the day! On our Facebook page are available over 300 photos with all the best from the Show! 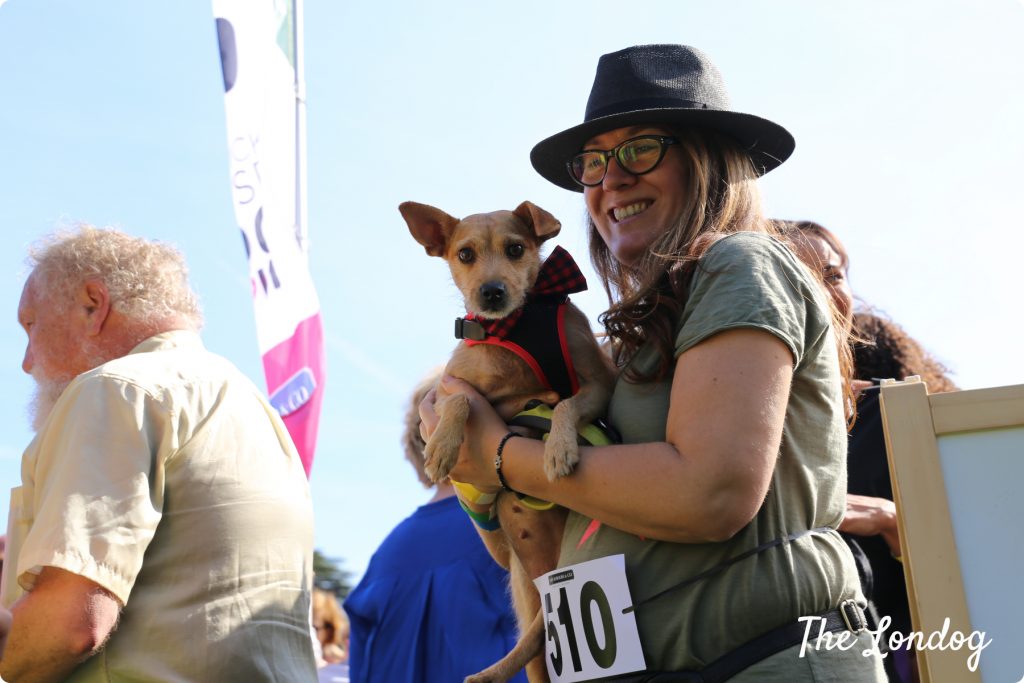 At the Show there was also a Doggy Dash. 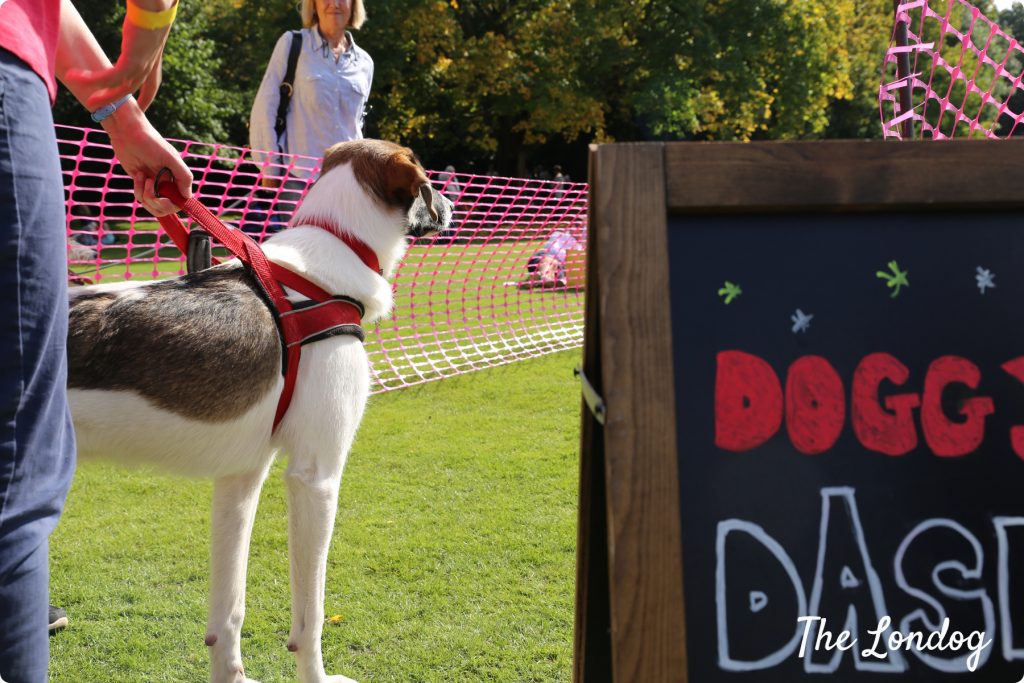 And who thought that two balls is better than one, probably rehearsing for the best smile in town! 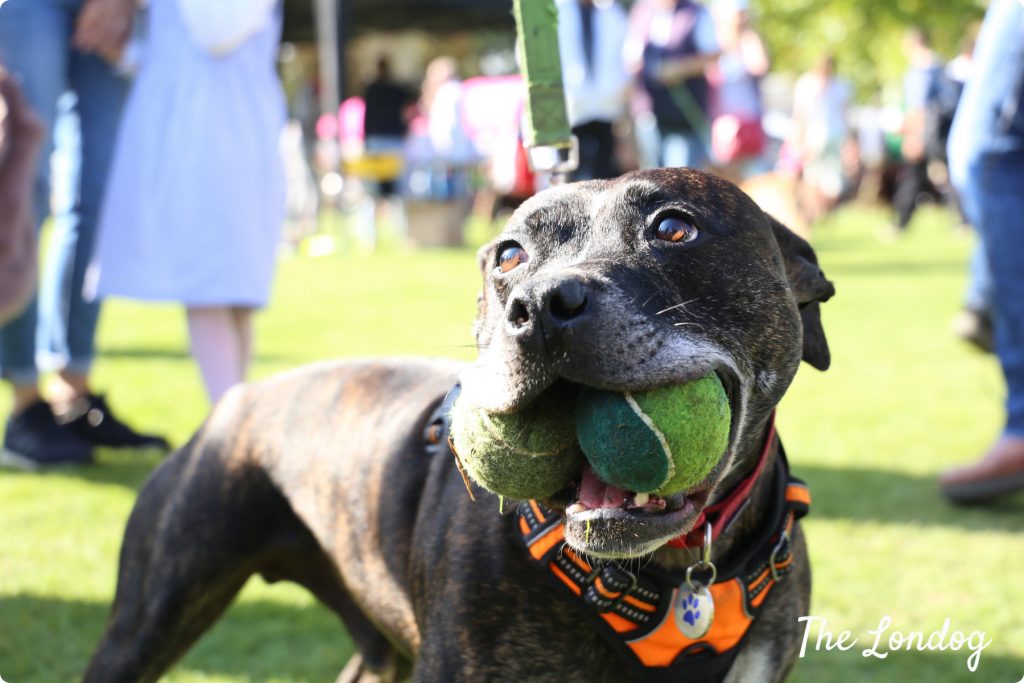 My Dog’s Got Talent class must have been a tough choice for judges… dog yoga (Doga), playing dead, and so many great tricks! 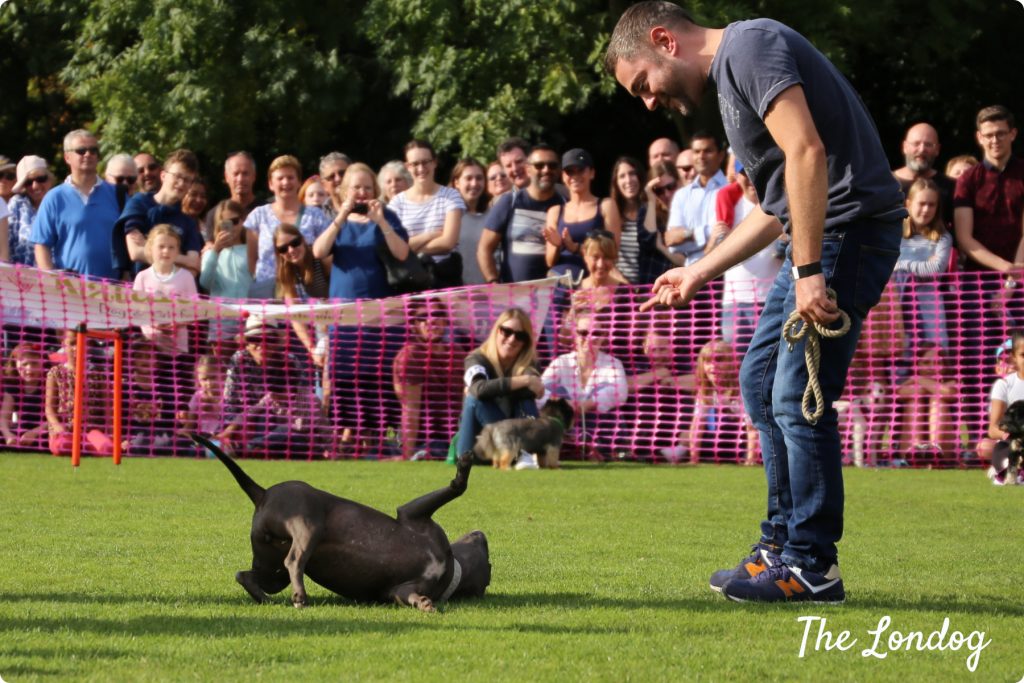 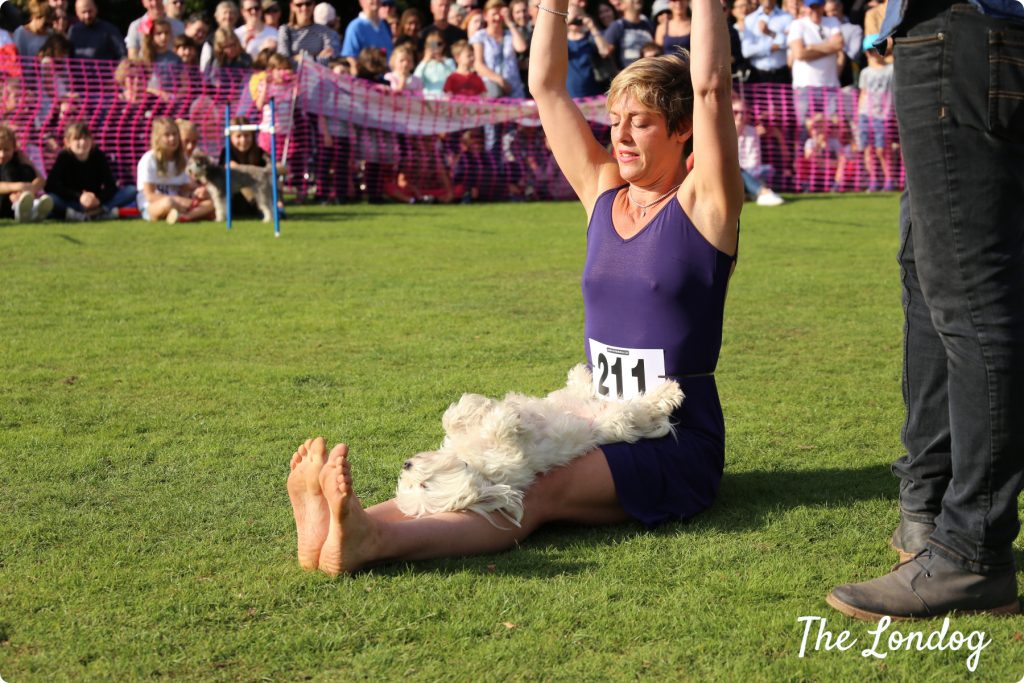 Zephyr the Golden Retriever (below) was crowned Naughtiest Dog. Despite his placid looks and how sweet he was with the little girls that accompanied him, he was infamous for having knocked down not one but two grandmothers while carrying a very large stick. He also shamelessly stole a Christmas ham. The second place went to Bayley, who had chewed his owner’s passport. 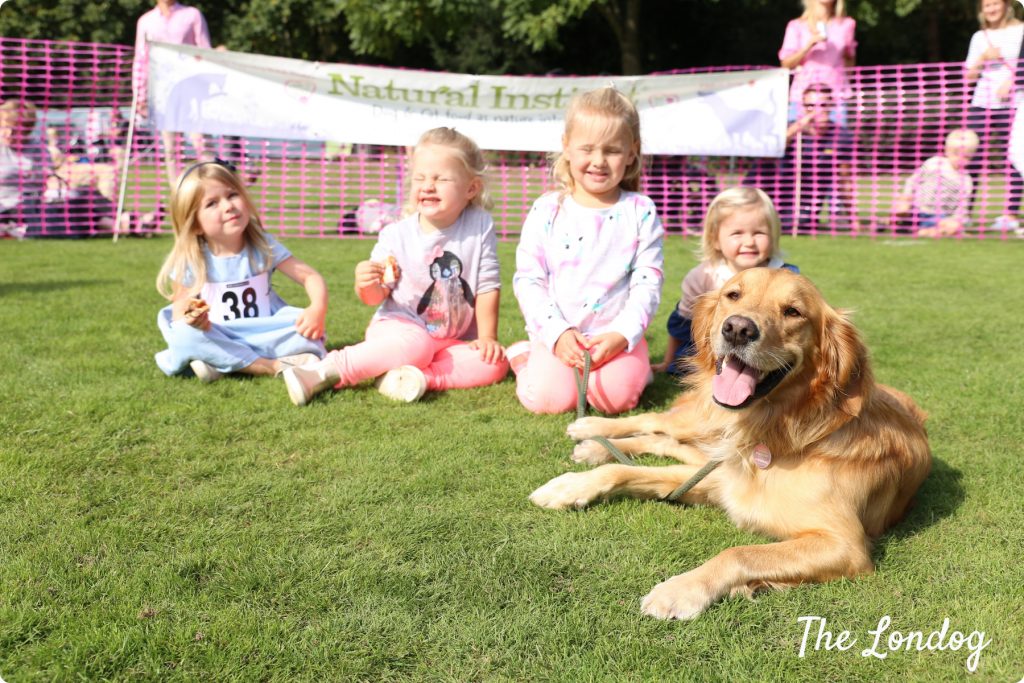 As usual, the fancy dress category was a big hit. Miss Marple, Sherlock Holmes, but also Redhood and the Wolf and many others attended. 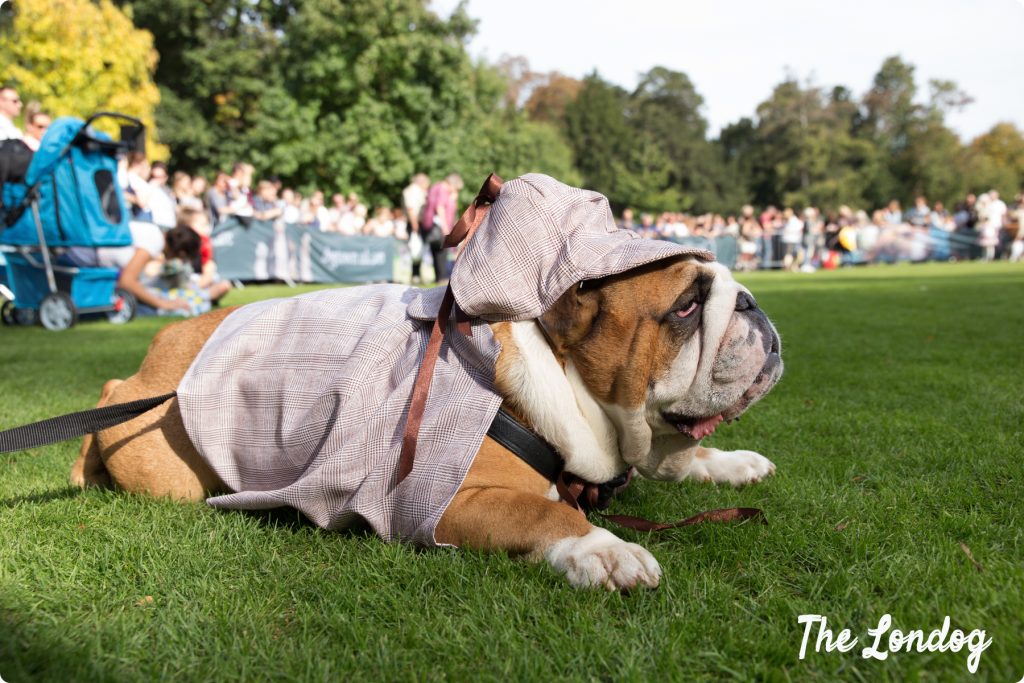 We very much loved the Sherlock Holmes interpretation by this Bulldog. And this elegant Miss Marple, of course… 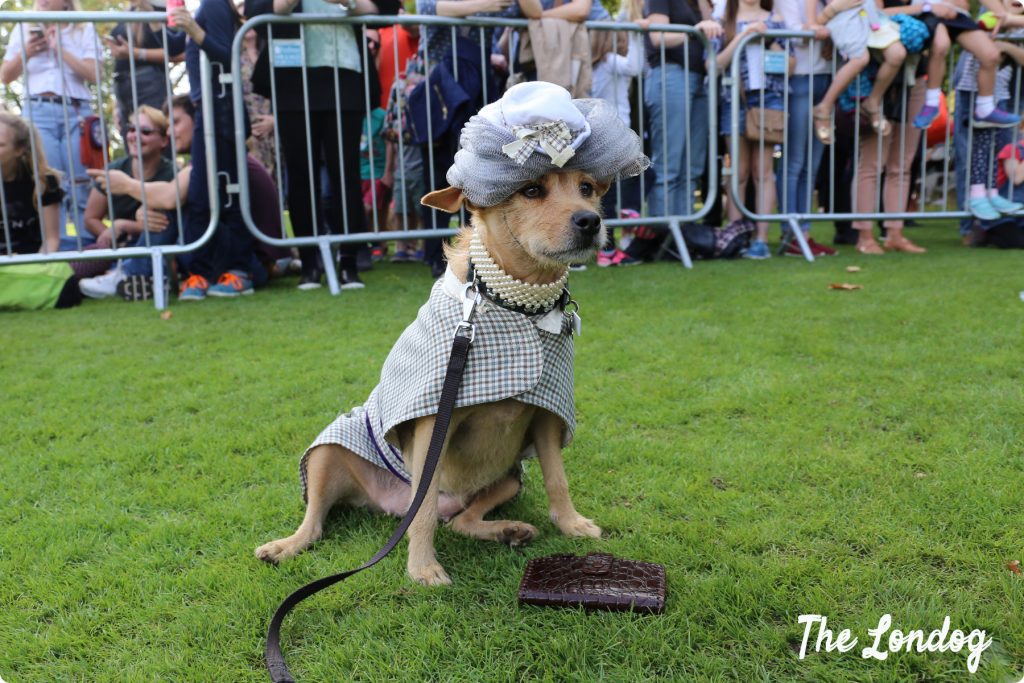 The very well deserved first place was awarded to the Fox Terriers Gang, dressed up as Keystone Cops, with little pup Hattie playing the escaped convict. 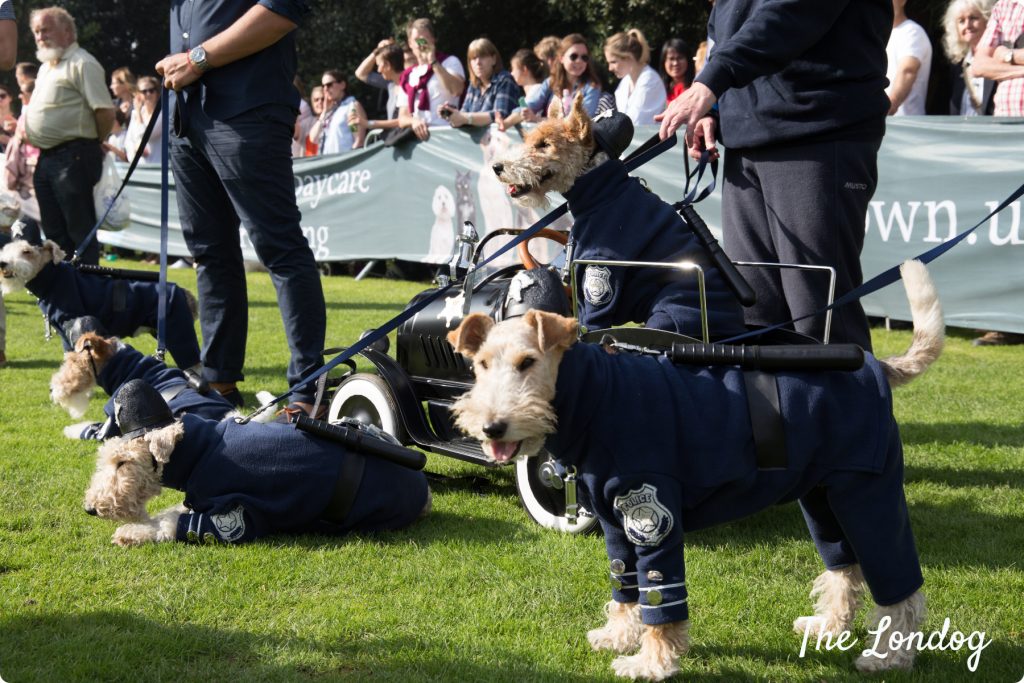 We had already met 5 of them at last year’s show, where they dressed up as ‘the Queen inspecting the guards’ for the theme “A Royal affair”. Both years, the garments were sawn by terrier owner Debbie, who told us “I love the challenge of making something for the dogs which is comfortable for them to wear, but makes everybody smile”. 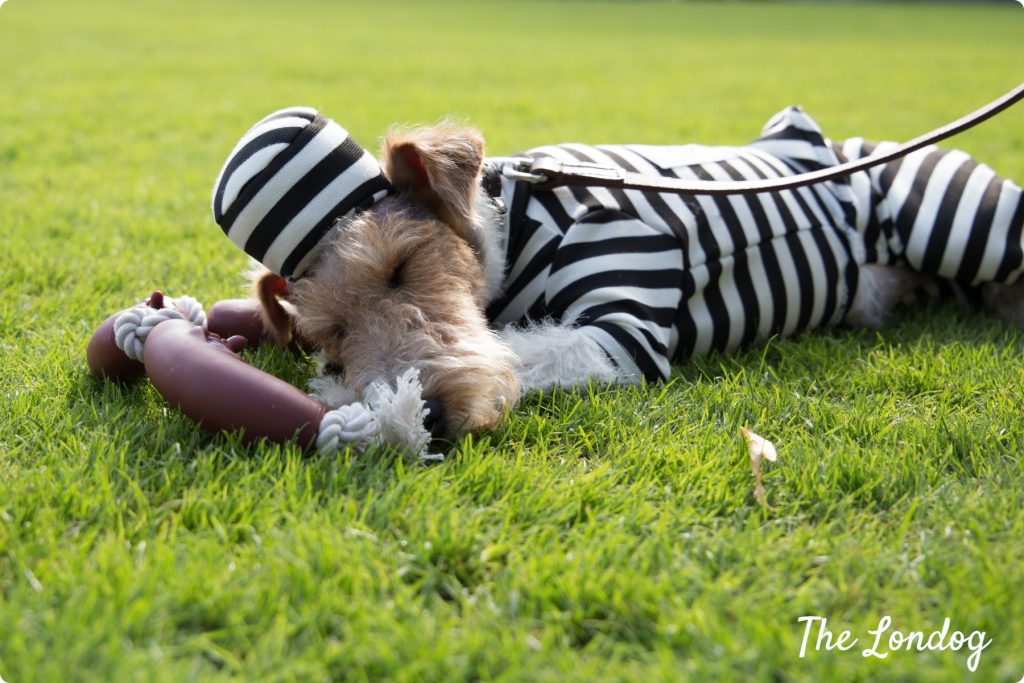 Debbie explained that the timescale for making the costumes was not as tight as last year’s (when she stayed up all night before the show to finish the costumes, sewing the last of the 64 buttons on just as the dogs got up for their breakfast!), but collecting the small-sized accessories was a challenge. She got the tiny handcuffs in Poundland, but had to buy full size truncheons and shorten them. “The tiny helmets were also a challenge, but ended up being made from Fosshape steamed over a pudding bowl from M&S (I had to try lots of puddings before deciding on the correct size!)” she added. The terriers were already used to wearing clothes, but little pup Hattie was a new entry, so Debbie made Hattie’s tiny convict outfit a couple of weeks in advance so she could get used to wearing it.

They even had a patrol police car, droven by Terrier Sid. Debbie explained that it was originally red, but was resprayed and the foxy police signs added for the occasion. Very impressive!

We can’t wait to next year’s Chiswick House Dog Show!

Find more photos From the show on our Facebook page! 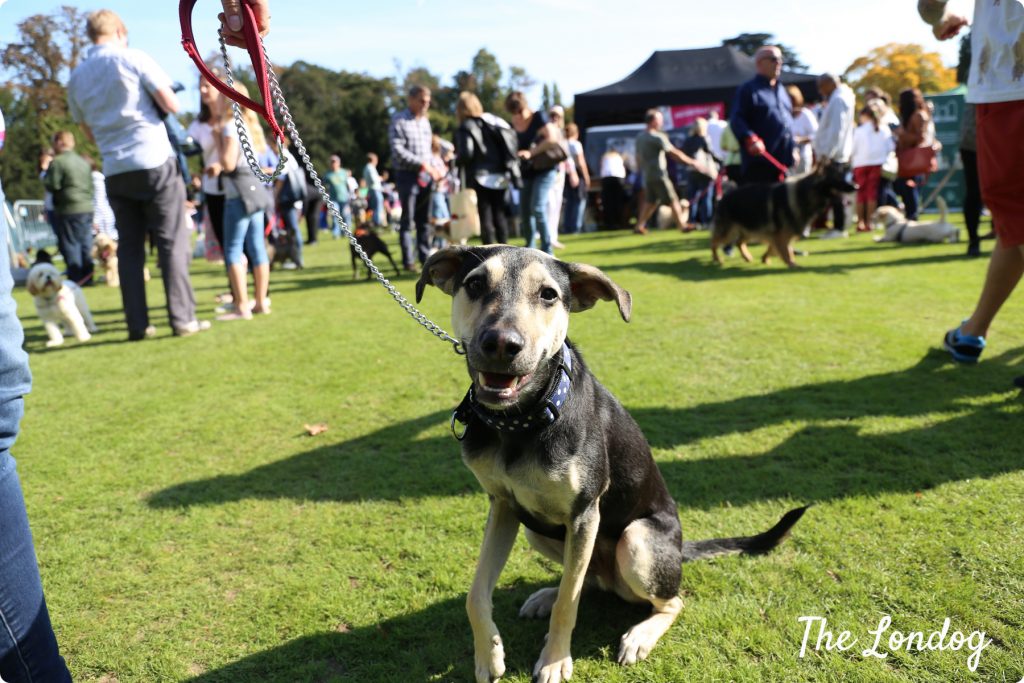