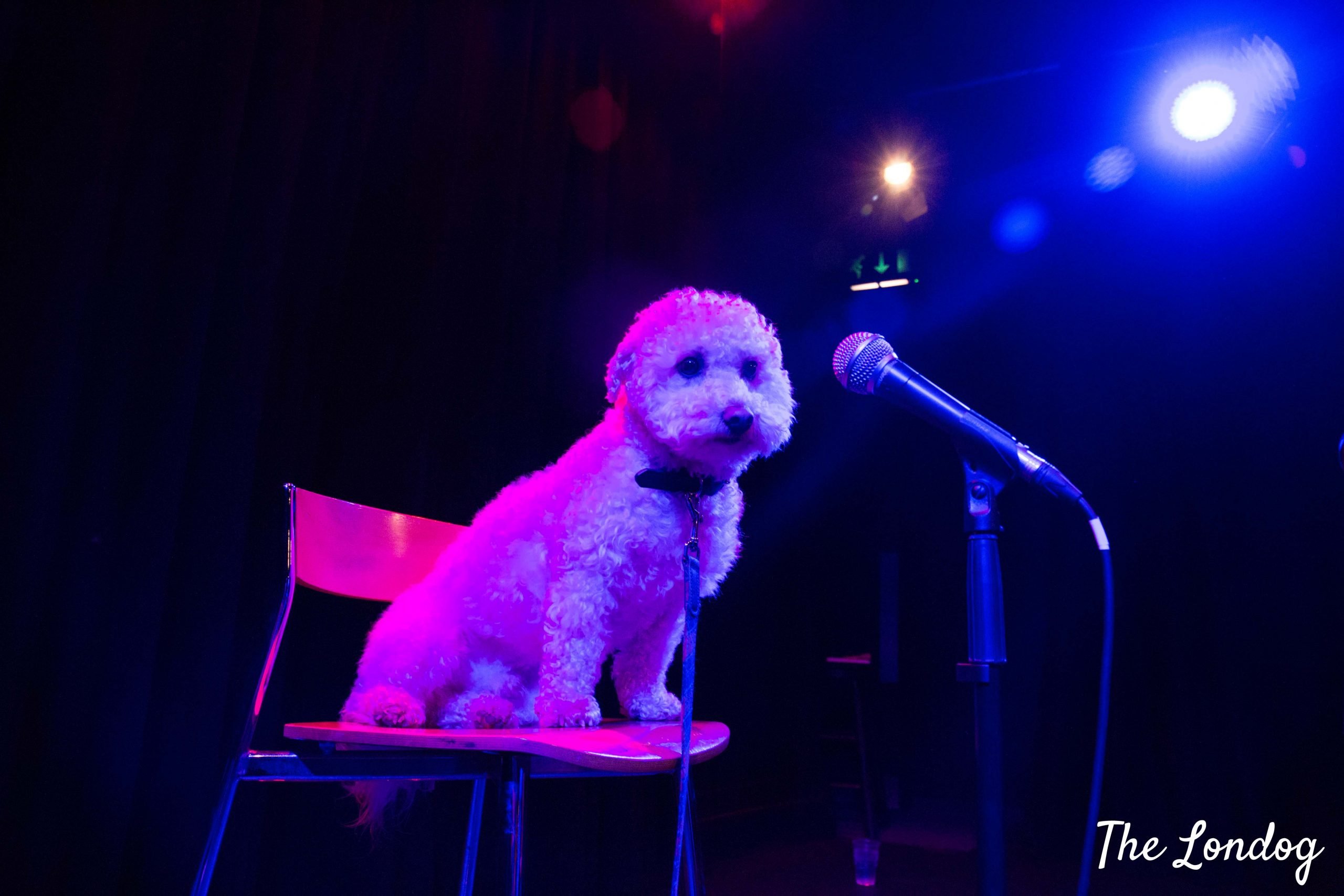 Barking Mad Comedy Club(s) was started in 2019 by comedian Simon Caine, as a series of dog-friendly stand-up comedy shows, giving the audience the chance to bring their dogs along (purchasing a dog ticket) to watch comedians doing their act. The club hosts shows in London, Glasgow and Edinburgh, and jokes have (of course – given the name) a canine theme, but not all of them. And did you know that all proceeds from the shows go to dog charity (the London shows support Battersea). We went along for the last show and we tell you what to expect in this post. 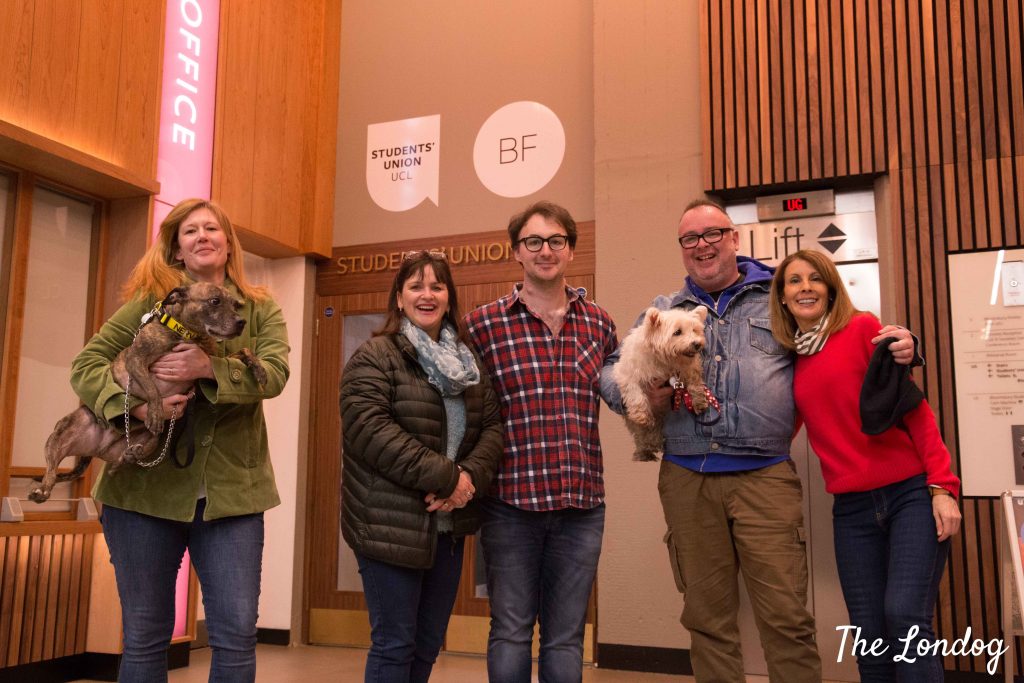 Simon Caine (centre) and some of the comedians of the night

Six comedians from the stand-up circuit, two(ish) hours, dogs in the audience, dog jokes and not-dog-related jokes, a Central London venue, proceeds going to Battersea. This is, in a nutshell, what Barking Mad Comedy Club is about. Brilliant, eh? 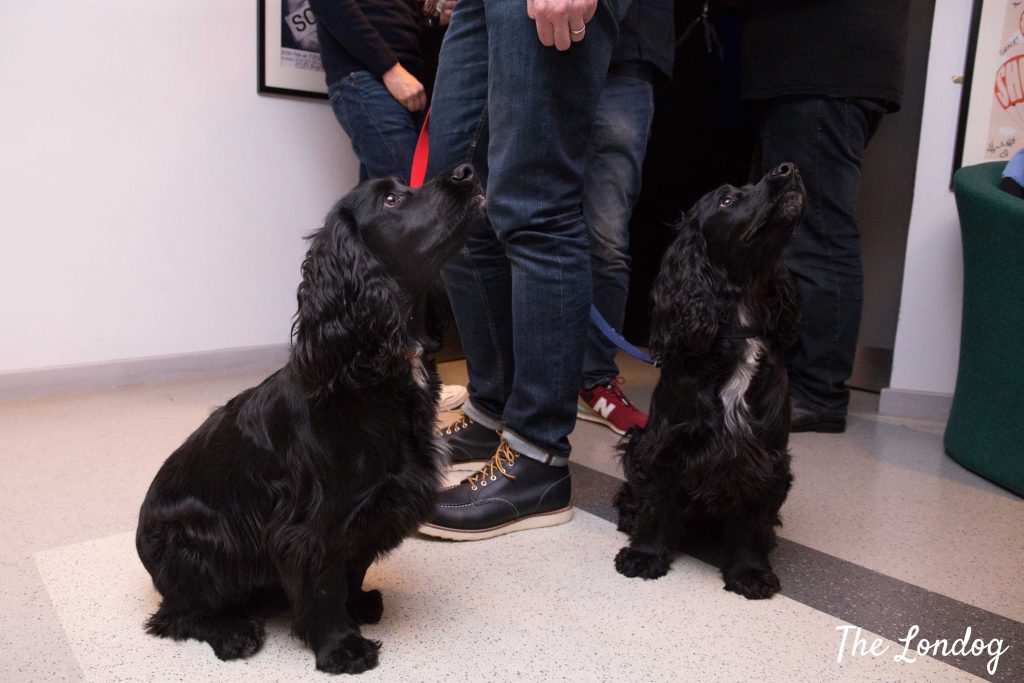 Bloomsbury Studio, a 60-seat venue in the basement of UCL’s Bloomsbury Theatre, is the place chosen by Simon Caine for his Barking Mad Comedy Club, which after its launch night in October 2019 which went soon sold out, has made a come back for 2020 with the first show held on Saturday 18th January, and next dates scheduled for 18th April and 19th May 2020 in London. If you are in Glasgow or Edinburgh you may have the chance to see some other show before then.

About the inspiration behing the Club, Simon says, “I love my dog. And dogs in general. I hate leaving mine at home, and I asked my audience if they felt the same and they did. So I wanted to make a space to combine my favourite two things: pups and jokes.” 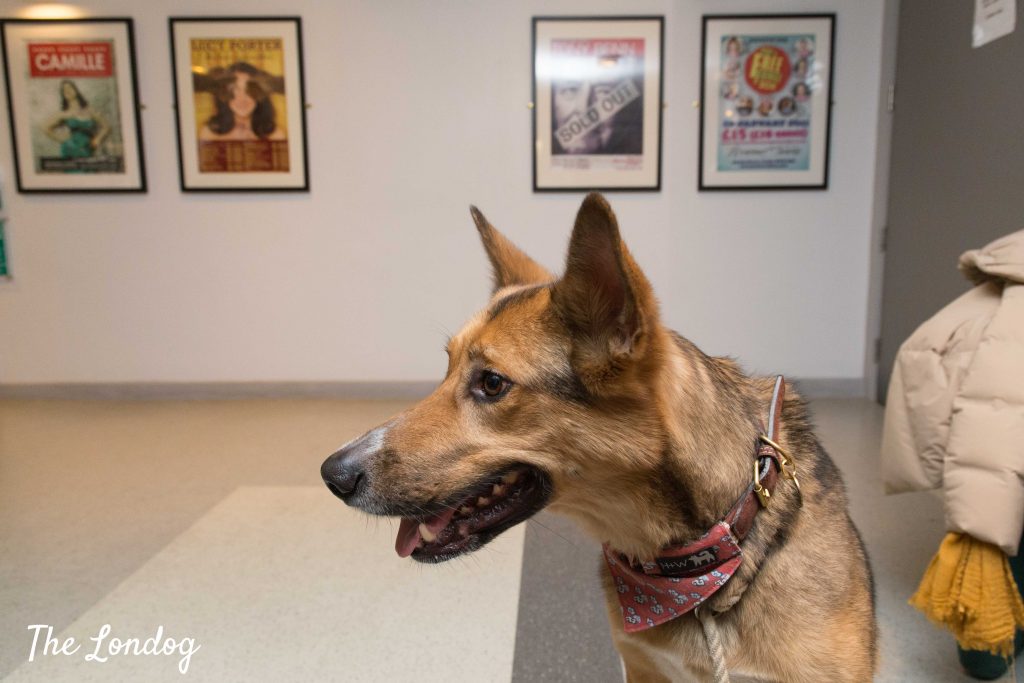 We attended the January date, and gathered with other dog owners (and “civilians” ;-))  in the foyer/bar area waiting for the doors to open. They had dog water bowls for thirsty pooches for the wait.

Dogs did not participate in the acts (although one of the comedians brought his dog Maisie on stage – who had a wonder around). However, at the end of the show, though, the the dogs in the audience could have a picture taken on a chair in front of the microphone. The room was very dark and the stage lights gave a bit of a surreal blue/red atmosphere – which is another way of saying that I am not good at taking photos with that light and excuse my attempts below. 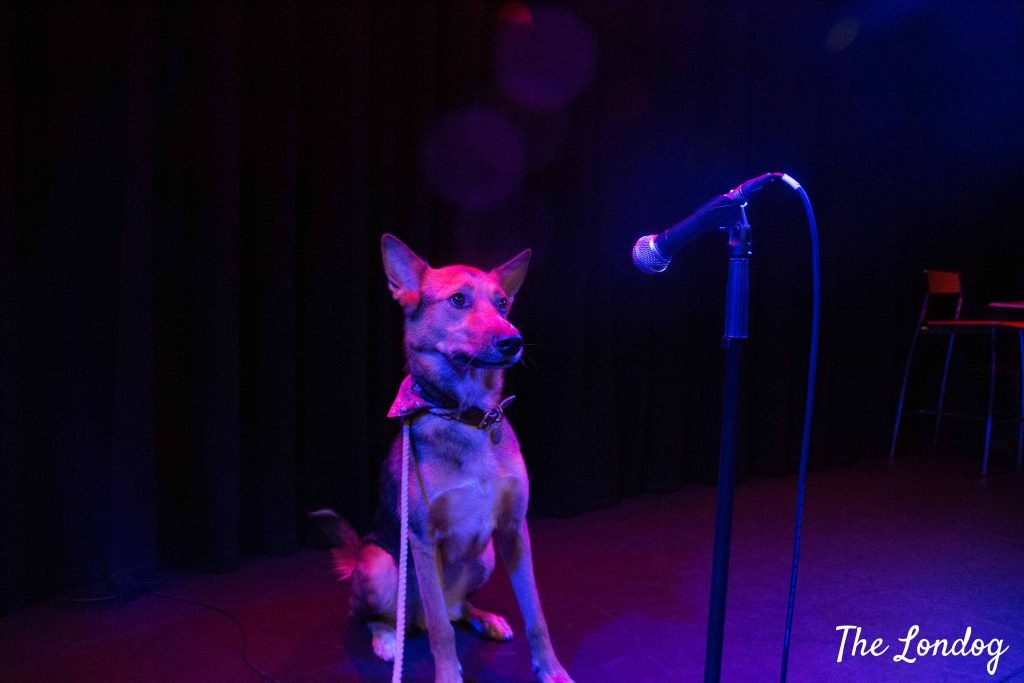 When the show started, the was a first round of applause and as some dogs (read especially Argo) joined in howling/barking, Simon asked the audience to replace clapping with waiving and it was the funniest (and probably strangest) acclaim for comedians on stage (some of them commented that it was a bit of a self-esteem killer not to get clapping).

During the show, apart from the initial barking on Cindy the dog, who became a bit of a highight for the comedians, the dogs were mostly quiet, even when the public burst out in laughs. I guess that everyone in the audience had their favourite act, and while I perhaps found some of them a bit brave in some parts (some strong sexual references),  I really enjoyed the evening and my favourite was Sonia Aste’s act.

The dogs’ favourite gig was most certainly Simon’s and the other comedians treat hand out at the end of each act. 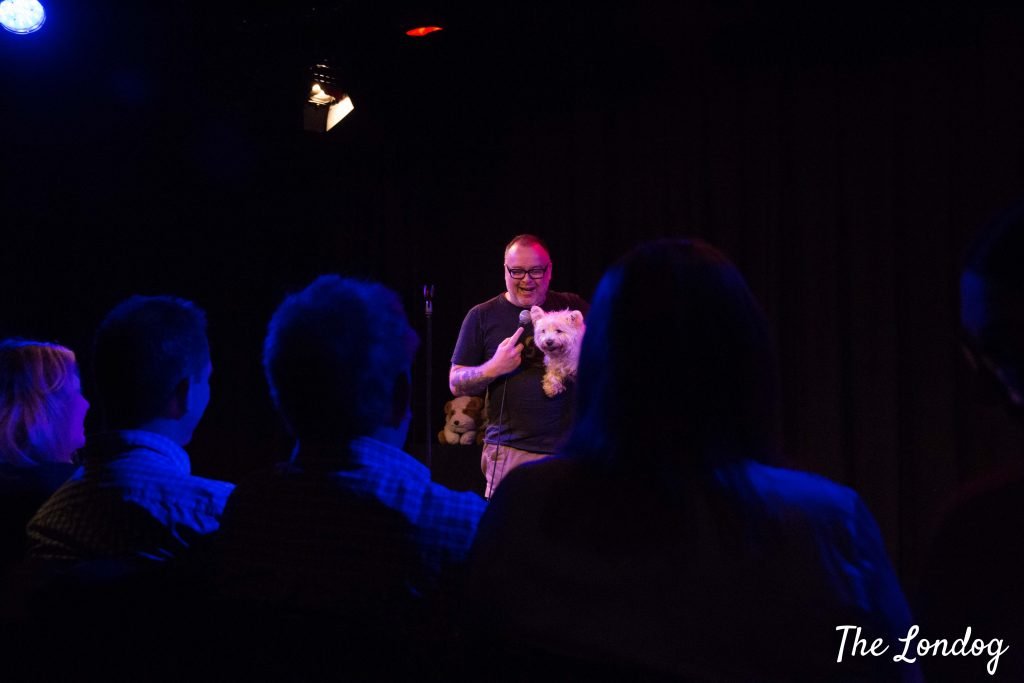 The line-up of comedians at the 18th January show included: Aidan Goatley (and Maisie the dog), Pauline Eyre, Currer Ball, Sam Dunthorne, Pope Lonergan and Sonia Aste, and it was a jolly time for everyone. The event recommended age guidance was 18+ years (which seems appropriate considering heavy sexual and drugs references of some jokes). 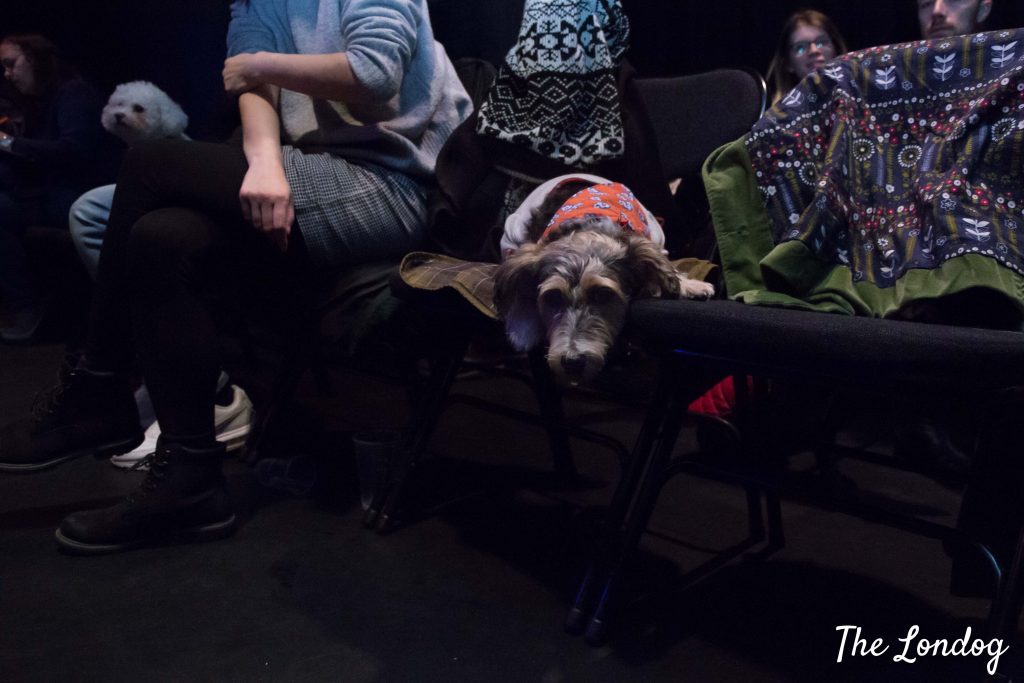 Every show features six different comedians, so you won’t see the same act twice if you become a regular. The next Bang Mad Comedy Club shows will be hosted at Bloomsbury Studio (nearest tube station: Euston), on 18th April and 16th May 2020, 6pm-8pm and will see two very well-known women comedians participating…. The 18th April show will see the legendary Sindhu Vee headlining! UPDATE 24/1: unfortunately Sindhu Vee will not be able to take part due to scheduling conflict and will be replaced by Terry Alderton (and his two dogs).

EXCLUSIVE! Tickets are NOW ON SALE for the Saturday 18th April 2020 show: from today until Friday 24th January tickets are available at this special link which can be used by Barking Mad and The Londog audiences, before they announce the show to the world and tickets are released to the general public on Friday!

Tickets promise to sell out quickly (the previous two shows did!), so head over to the website to get yours (and your dog’s). 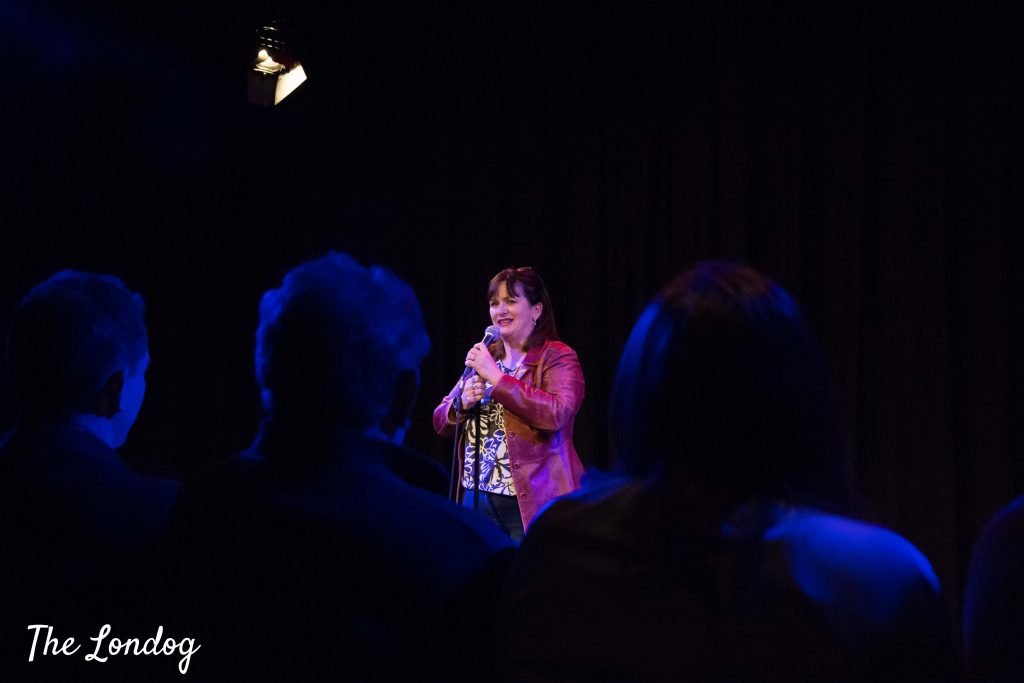 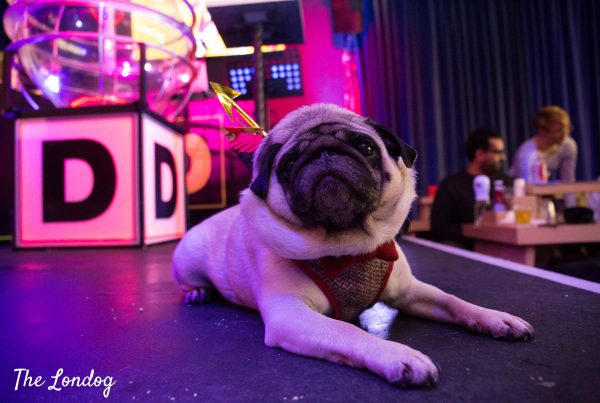 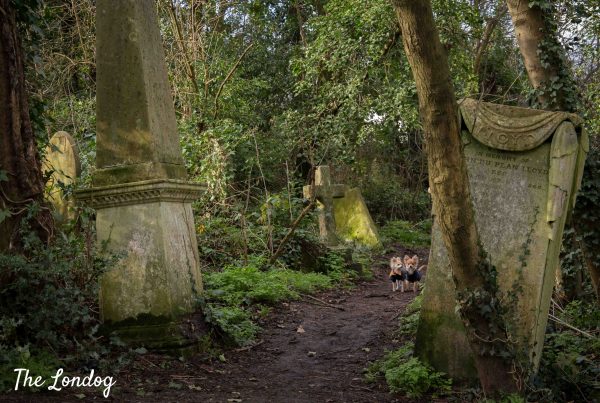 5 dog-friendly cemeteries in London for a different dog walk 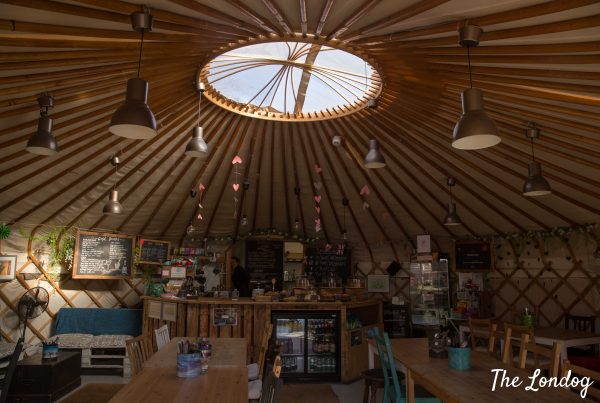