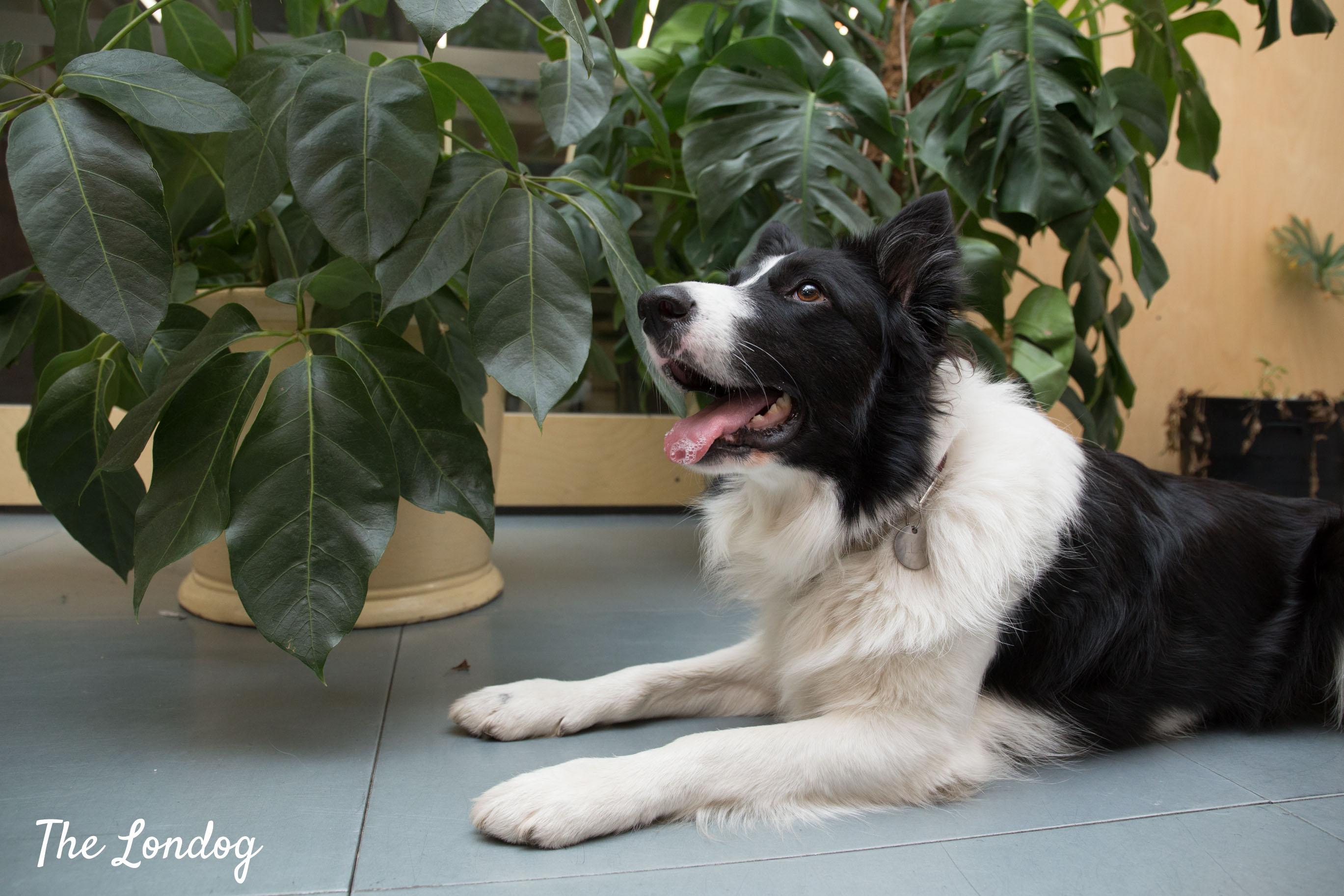 Léa is a smart Border Collie. With her pet passport, she has travelled around the globe and now enjoys going to work at 8am Airbnb HQ, in London, with her mum Nicola. Her story opens the 12th edition of the Office Dog Series, starting today. 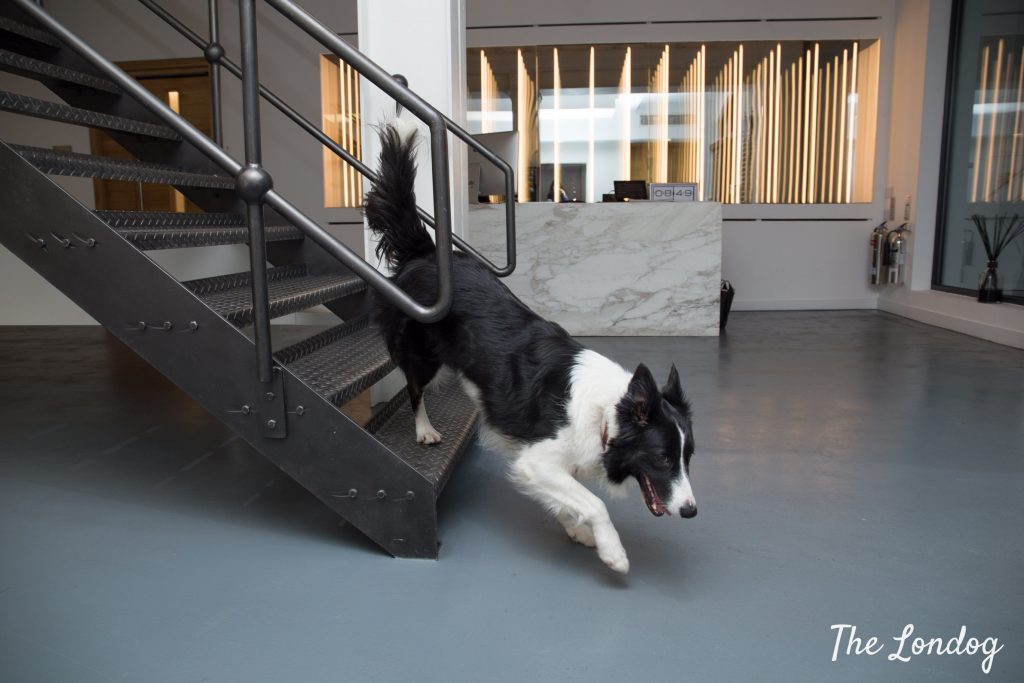 I meet Léa and her mum Nicola on a very early weekday morning, at Airbnb HQ in London. Léa charges from the courtyard through the sliding doors with a cheerful pace, enthusiastic to get to work. The kind of sprint that any human would envy on a Winter Monday morning.

Léa wonders around the bright modern reception area and comes to say hi. At four years old, she has lived in four different countries already, and visited countless others. “For a sheepdog from rural Spain, Léa has led a fairly adventurous life”, comments Nicola. “Spending her youth catching waves on the beaches of Barcelona, she has benefitted from her parents’ globetrotting lifestyle. Born in the heart of southern Spain, her long hair and gorgeous brown eyes prove her Andalucian roots. Although she was born in rural Spain, she has lived a cosmopolitan life in various major European cities including Barcelona, Paris, Berlin, and now London”, she continues. Nicola recounts that Léa even checked out the UN while she was working in Geneva and tried to jump into the Trevi fountain in Rome. She even has some adventures booked, as they plan a trip to the Greek isles in June of this year. 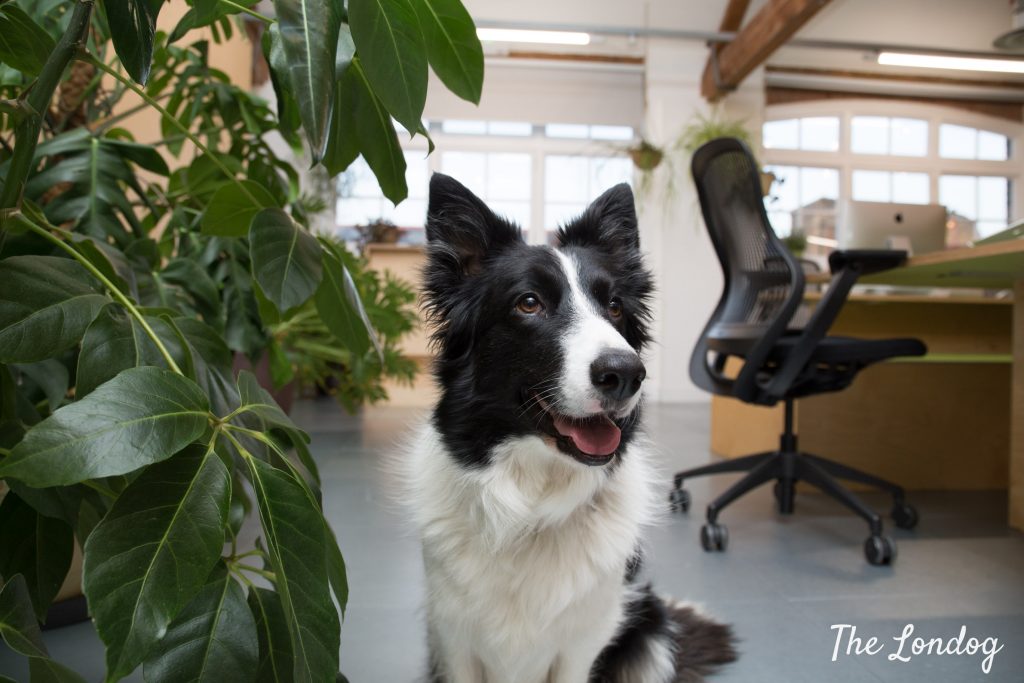 Nicola affectionately calls her Pulcinella, Spooky, Leitus, depending on how creative she is feeling on the day. “True to her Border Collie breed, Léa is curious, intelligent and active. Her favorite activity is playing ball in the park, as well as the busy streets of London, much to the disapproval of her parents”, explains Nicola. “Léa has a one-track mind once she sets her sights on a goal. She is very loyal to those close to her and likes to take part in everything her parents do, including numerous daily trips to cafes, bars, shops and restaurants. It is obvious that Léa thinks of herself as a human being consistently leading the pack on walking trips”, adds Nicola.

Léa is also known for…

Loving: Balls
Hating: Street performers that blow giant bubbles, Fireworks – Guy Fawkes day – actually really the whole month of November
Funniest habit: Trying to catch balls on the movie projection screen, trying to climb into the shower to be close with her parents in the morning
Most annoying habit: Chasing people on skateboards and rolling suitcases
Most famous/infamous episode: When Léa was a puppy and left tied to a chair on a terrace, and took off two blocks down the street chair in tow

A day in the office dog life of Lea 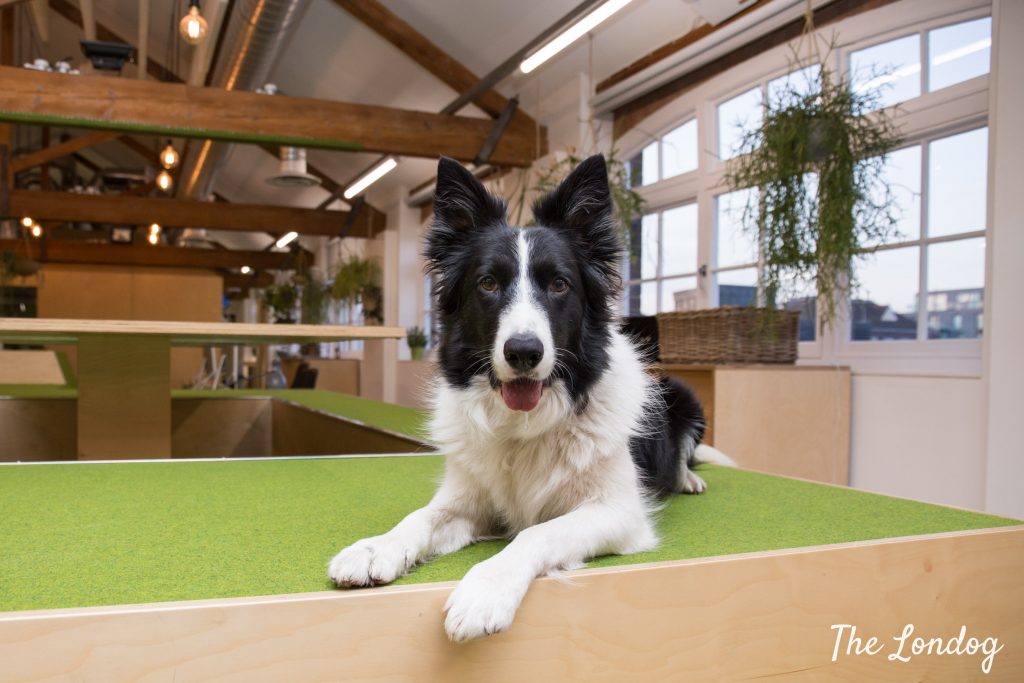 Airbnb offices take up the top and the ground floor of a modern building with a colourful gate and a lovely courtyard on a quiet street in Clerkenwell. Léa is the first to walk into the lift, where sounds are muffled by a soft red padding, and she patiently waits to get out to and run to the office’s door. The sun is still rising as we enter the desert top floor office. The rooms have some sleek features, like a raised wooden structure covered in green carpeting, with tables and seats placed on different levels, and a green corner with many plants.

As we explore the office, Léa spots a big grey balance ball and tunes into it completely, trying to play with it with her paws.  “If Léa were a religious creature, she would worship the almighty “round thing”. By this, we mean balls,” says Nicola. “Léa is beyond obsessed with anything remotely spherical and loses all sense of reality when a ball appears. She would rather chase after a ball than eat a roast chicken any day.” 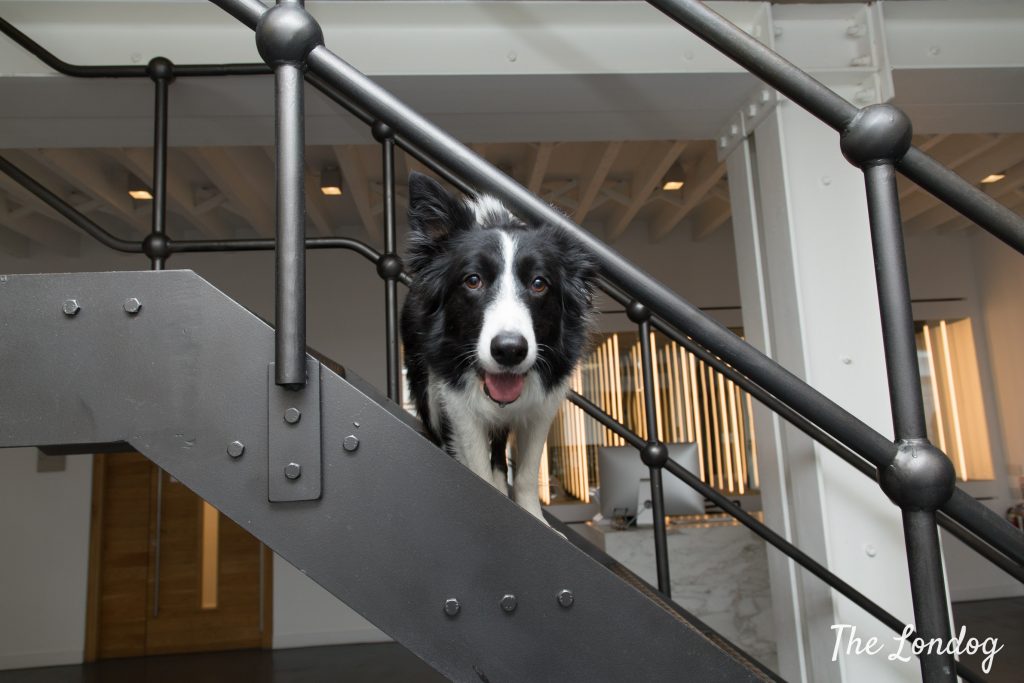 Balance balls apart, Léa is quite chilled at the office. She joined Airbnb in October, shortly after Nicola started a new position at the company and moved to London. “Léa’s favourite spot to stretch out for a long nap is usually in across the carpet in ground floor work room, half blocking the main door. That way people HAVE to stop and give you a rub on their way in and out of meetings,” explains Nicola. “What she most enjoys at the office is when she is left to her own devices, which means she can have free reign over all of the crumbs laying around. On a typical day at the office, Léa hangs around the “potting shed” (ground floor work space) where she stretches out on the floor and doesn’t bother anyone.”

Also the morning commuting is enjoyable for Léa, though her sheepdog trait can come bring some funny diversion. “Léa LOVES the TFL in all of its forms. Normally to get to work she likes to ride at the top of the double decker bus”, says Nicola. “Léa is a sheepdog through and through, constantly trying to create order where there is chaos. You can imagine how this looks when she is riding the tube into central London wanting to herd the passengers,” laughs Nicola. 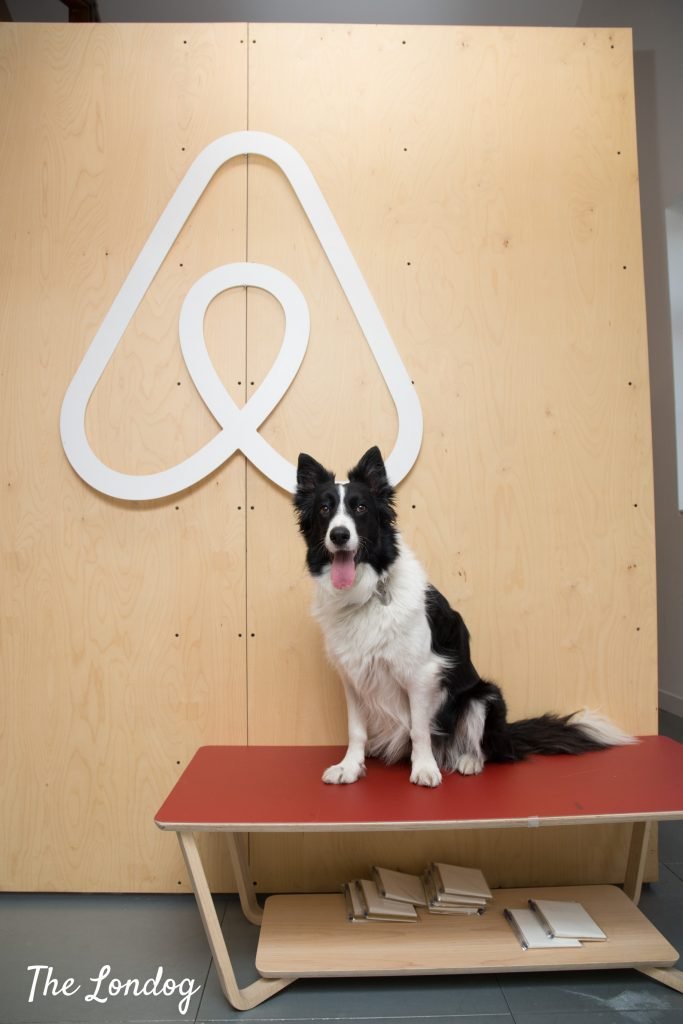 Like most modern tech companies (although quite a few of them only apply such a policy at their US HQs), Airbnb is welcoming with dogs. “Airbnb has an amazing dog- and pet-friendly culture. Around the global offices, staff often come accompanied by their four-legged friends. Although there are no other office dogs that regularly come into the London office, Léa does videoconference from time to time with her counterparts in the San Francisco office including Stani the Australian Shepherd and Rico Starfox.”

So Léa loves the team and the team loves her back. “The team at Airbnb London spoil Léa to death. The days she goes into the office she usually has to go for an extra run in the park to burn off all of the treats that she is given. The only minor challenge is when people start playing pingpong and Léa is tempted by the flying balls.” 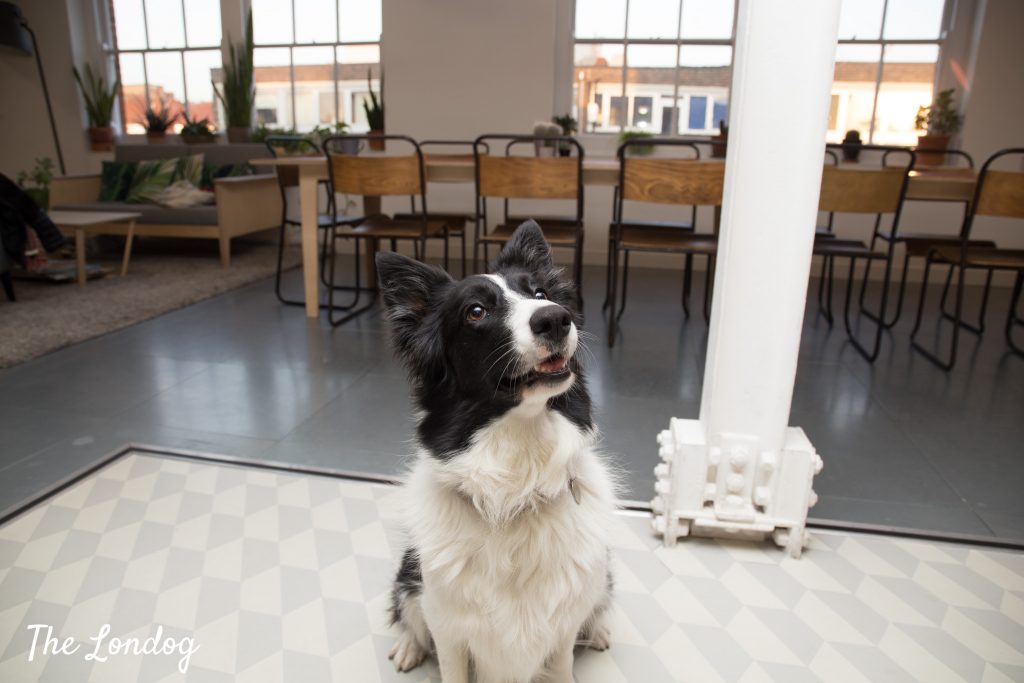 If Léa could give one piece of advice to new office dogs it would be: 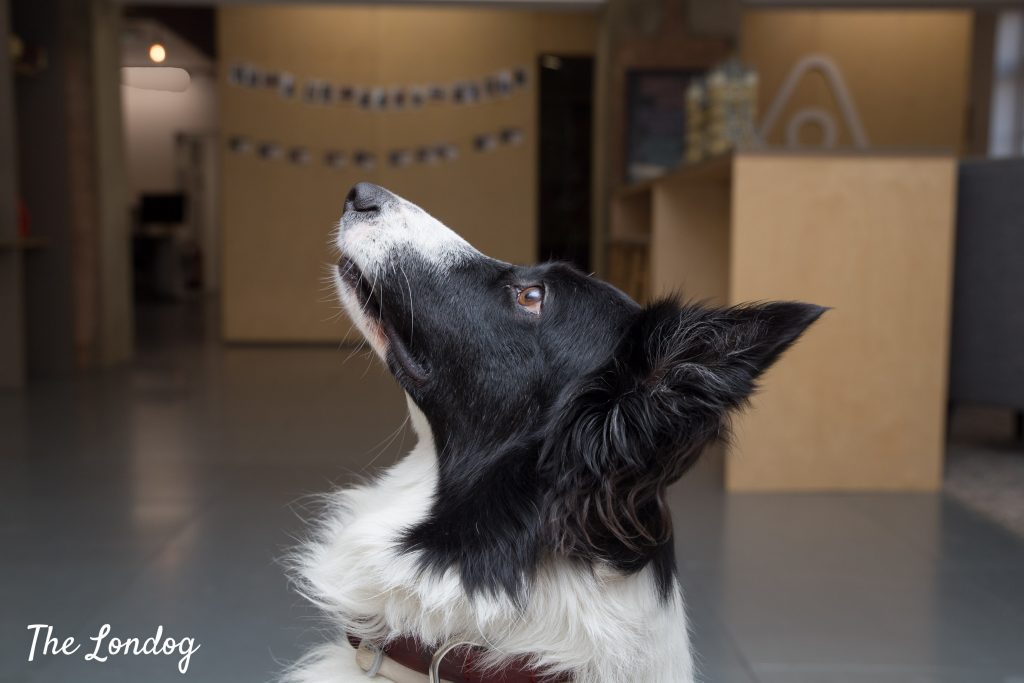 Tomorrow on the BLOG meet Pablo the black Labradoodle from a film production company.