A visit to the Crossness Pumping Station with your dog 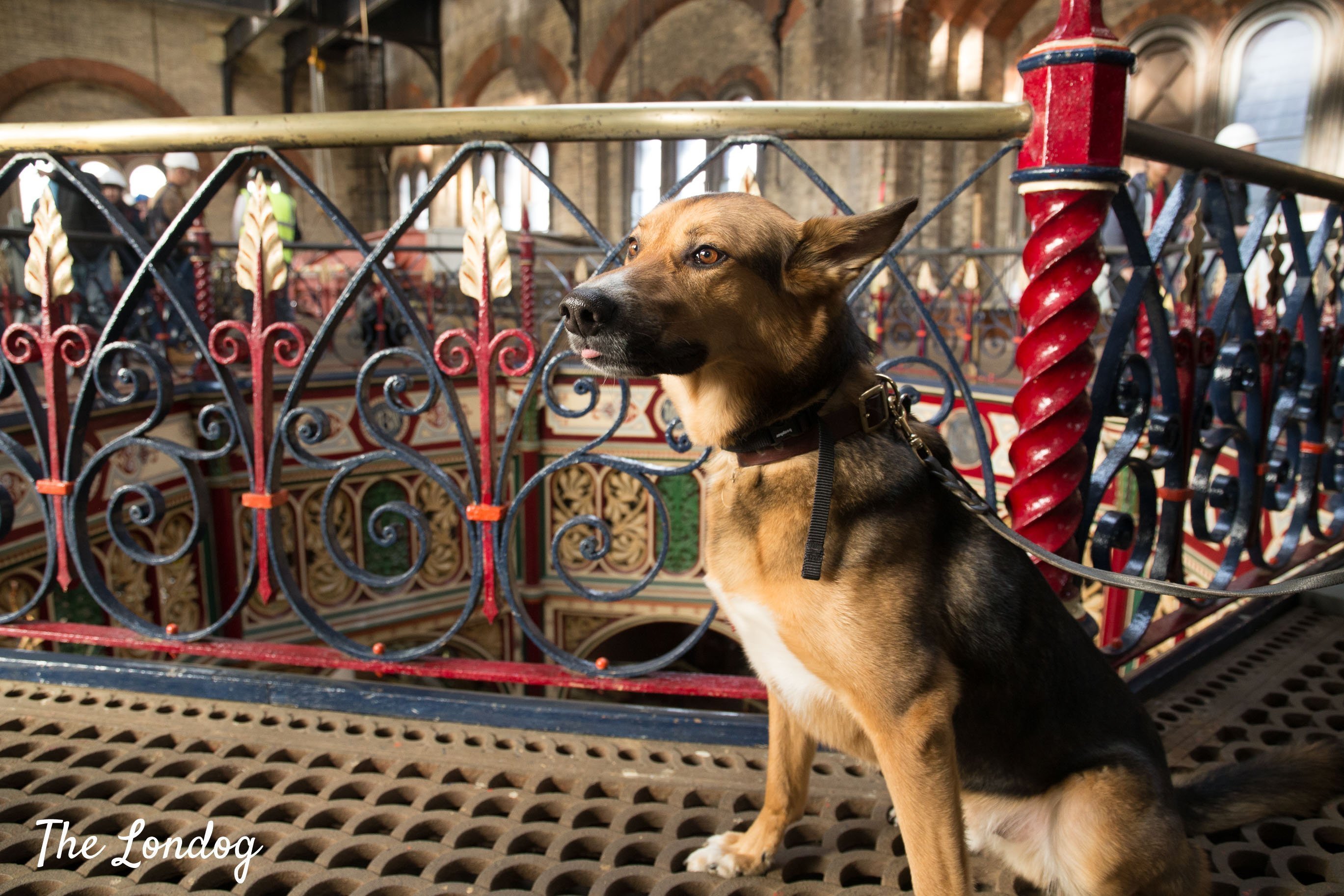 Sunday 31st March marked the reopening of the Crossness Pumping Station, a “historical cathedral” in the Thamesmead area, far East on the South bank of the Thames, after a big makeover to clean up its Prince Consort steam pump from asbestos. This Grade 1 Listed building, which opened in 1865 and features some of the most spectacular ornamental Victorian cast ironwork, was built by Sir Joseph Balzagette and is a real masterpiece. It is something very far from what you would expect from a sewage system! When writing about Open House London 2018 dog-friendly venues, last year, we confirmed with the Crossness Pumping Station’s staff that dogs are allowed at the site. So, on 31st March, we finally visited and today we tell you all you need to know to make it a lovely day out with your dog.

Visiting the Crossness Pumping Station with your dog 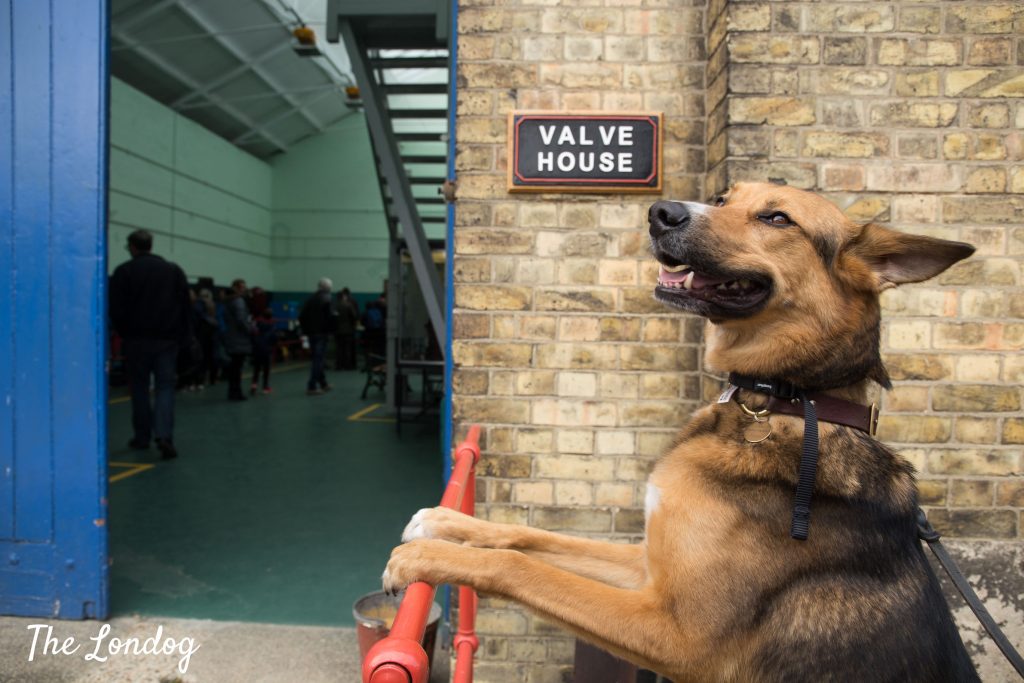 If you travel by public transport, reaching the Crossness Pumping Station is not the easiest of the trips. In fact, you can get as far as Abbey Wood railway station, but from there there are no buses reaching the site directly and depending from the route you take, it is a good walk (34 minutes on busy roads according to Citymapper, 1 hour and 10 minutes according to Google Maps) in a not-very-glamorous area (large roads, abandoned buildings, construction sites), apart from the very last leg.

Luckily, in occasion of certain Open Days, they organise a shuttle from Abbey Wood station, departing from the Abbey Arms Public House in Wilton Road (you have to walk down the stairs just out of the station on the right – we asked TfL’s staff and they told us where to go). On our visit the shuttle was completely packed: as we arrived at the pick-up point in the morning, around 10am, there was already a long queue. As the coach could only fit about 40 people, we had to catch the second one (it took a good 40-minute wait in the cold, so go armed of water and patience – although there is a Greggs nearby -). The shuttle was a white coach and we confirmed with the driver that dogs were allowed, so Argo was welcome on board. 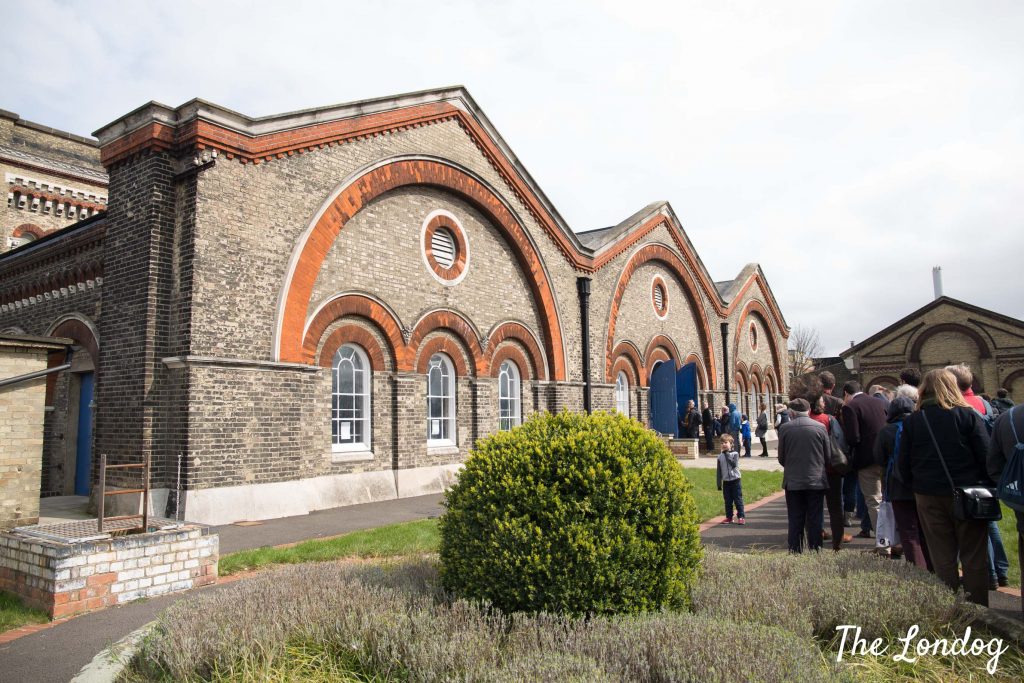 A 10-15-minute ride on the shuttle takes you to the Crossness Pumping Station. Tickets are paid upon arrival, when you can also purchase the return, for £3. As soon as we got there we found ourselves in front of the large and majestic building that hosts the beam engine, and some other secondary buildings nearby, before getting in line in another very long queue winding around the courtyard. During our wait, Argo decided to exhibit in rolling and scratching on the grass and we also met two beautiful Irish Setters, who we assumed belonged to somebody from the staff as the lady they were with wore a uniform. There was a strong sulphur smell in some areas of the courtyard, coming from a shaft. 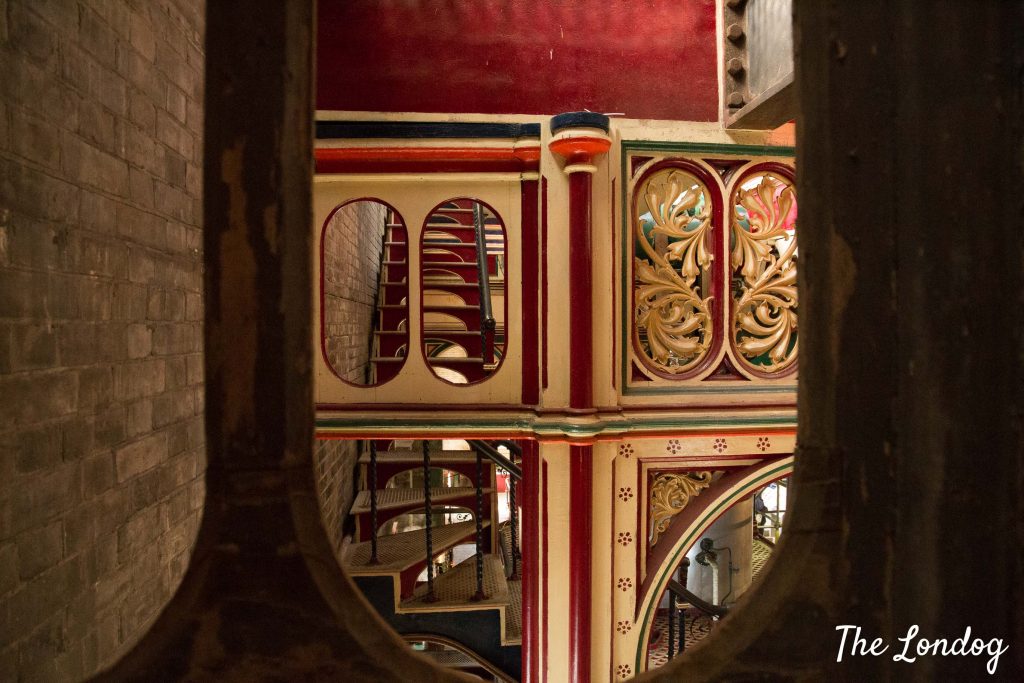 It took us a while before getting in, so I would advise to get there as early as possible, to avoid crowds, and be mindful of the weather. Bring something warm to wear and windproof if the weather is turning, or, if it is sunny and warm day, it may be the case of taking turns in the queue and bring your dog to rest in the shade during the wait, or adopt some other anti-heat measures.

The Crossness Pumping Station may be in the middle of nowhere, but there is a café inside the main building (as well as a little shop and toilet facilities), so no need to bring a full backpack of snacks and drinks. Just consider that the café is past the ticket office, so it may be wise to bring a water bottle for when queuing outside.

The Great Stink Exhibition: a travel through time 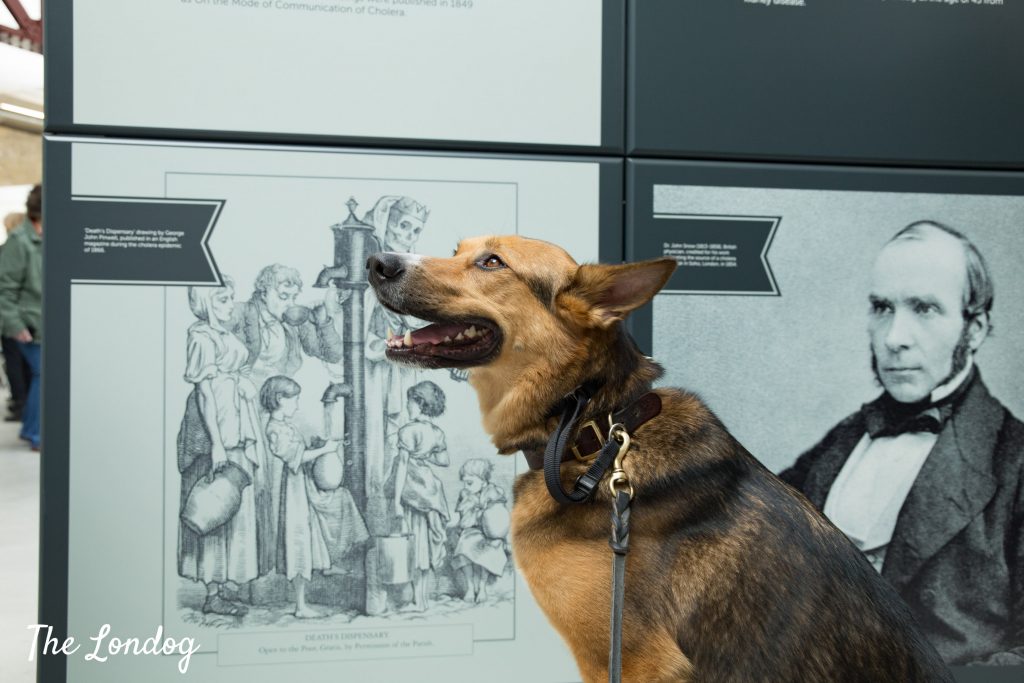 Passed the ticket office, we finally got into The Great Stink Exhibition, in the main building, past a short tunnel with fake black mice on the floor (which tricked both us and Argo at first!). The exhibition takes on a large space once designated as the boiler room (but no boilers have been preserved) and we were given a map at the entrance with the path to follow to navigate the stands (the map was a bit confusing and we are not sure we followed the right order though). 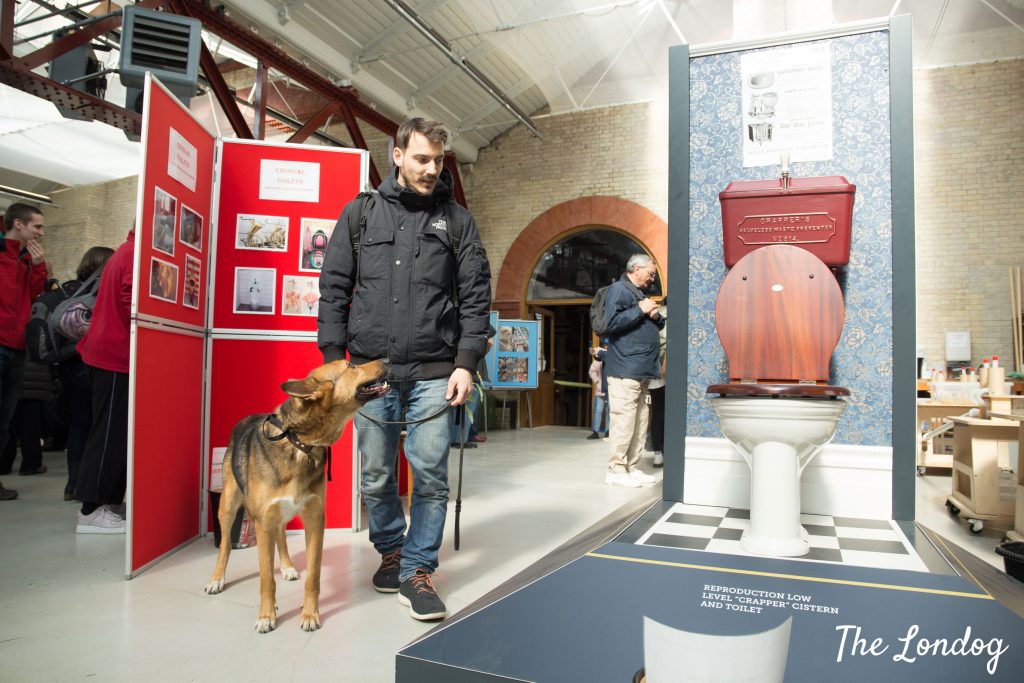 The exhibition is about the very interesting history of how London’s human waste hadling has changed and the effect this had on people’s health and on the city in general. The Great Stink of August 1858 is one of the events remembered. The project of the world’s first sewage system – the Crossness Pumping Station – which opened in 1865, helped to improve water quality and contributed to eradicating cholera. Sir Balzagette’s plan included a network of 82 miles of enclosed sewers, flowing into Crossness Pumping Station.

As part of the display, there are also old toilets and an interesting explanation and samples of what is believed to have been used by the Romans and other civilisations before toilet paper was invented… but I don’t want to spoilt it! Argo walked with us among the stands and got plenty of cuddles from other visitors and some big smiles from the staff too. 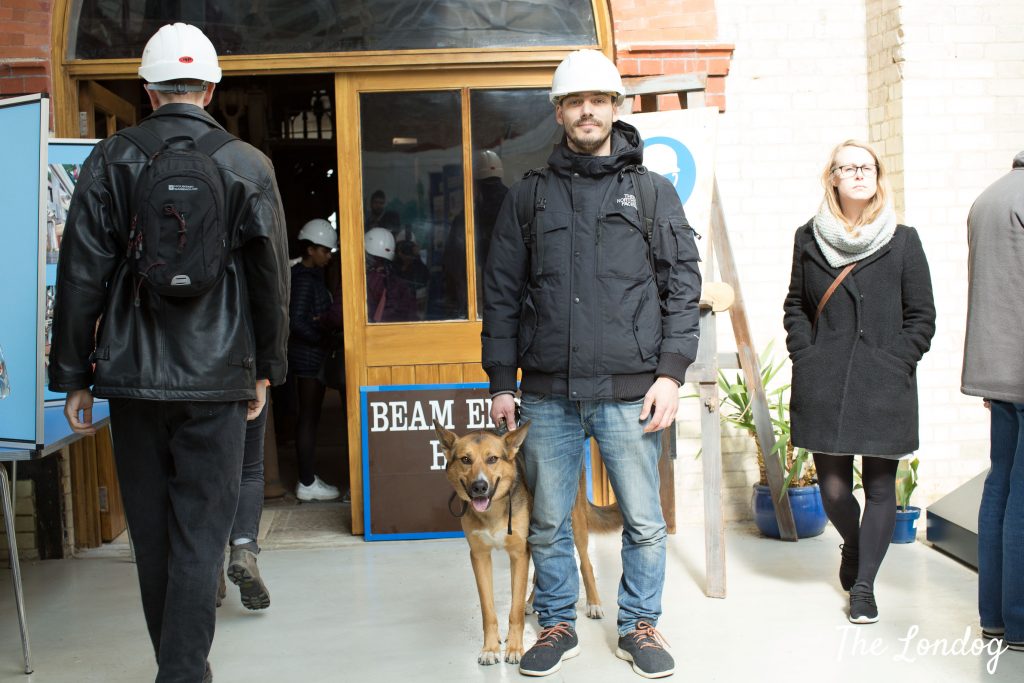 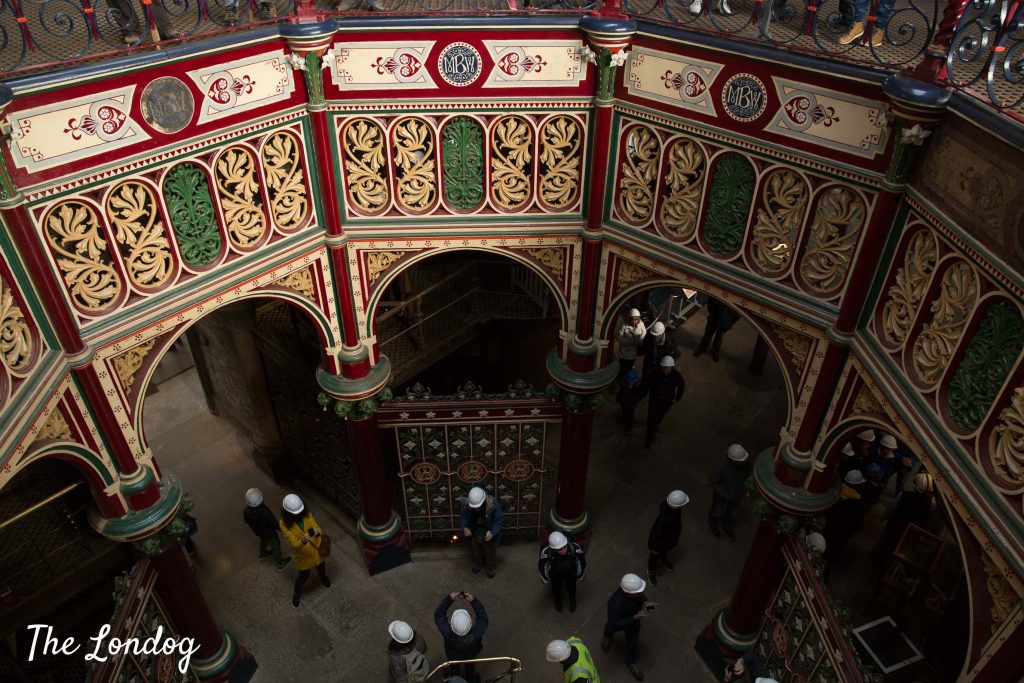 To get in the Prince Consort beam engine house, you will be given a safety helmet. It is mandatory to wear it at all times and a good idea as you may find your head having close encounters with iron-works when walking around. Also essential is wearing comfortable shoes (absolutely no heels if you hope to climb up the stairs and walk on the upper floor).

We picked up a safety helmet each at the table next to the entrance (they advised us that they didn’t have one for Argo though) and walked in. If you love industrial archaeology, the Crossness Pumping Station’s Prince Consort is landing in paradise. The incredible metal works and decorations are a stunning piece of art, and the rod and piston of the beam engine is facinating. When you walk down the stairs you will be able to admire some little and colourful details that will surprise you. The pumping station may have not a glamorous function, but Sir Balzagette crafted it as a beautiful gem. 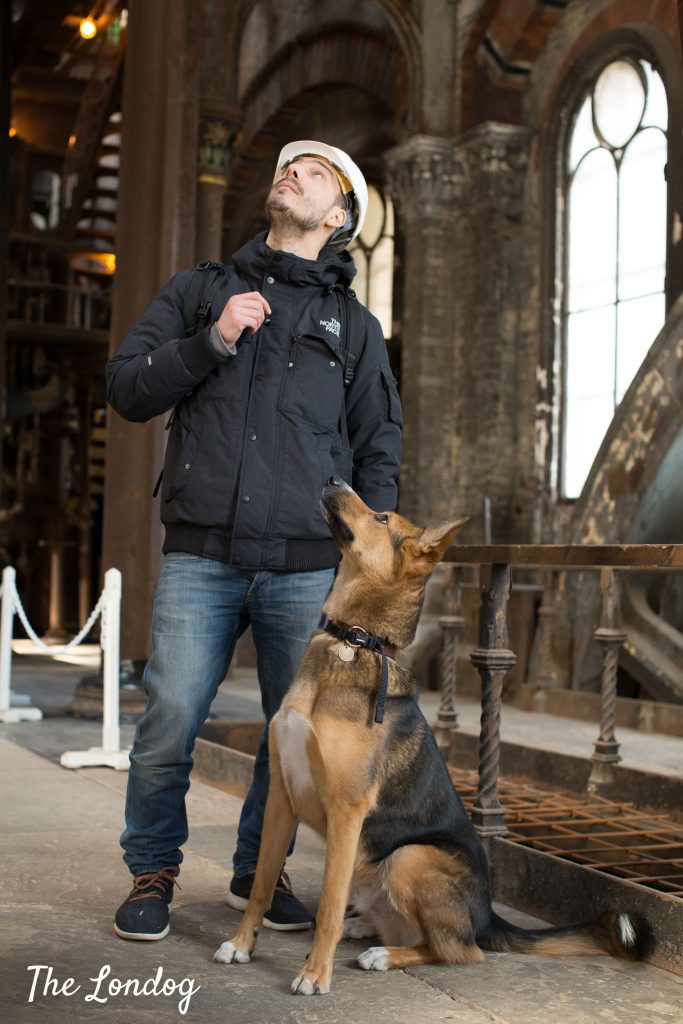 While the ground floor is suitable for bringing your dog, during our visit we realised that the upper levels are not a place for canines, as their have iron mesh flooring, and the holes are quite large. While Argo, with his large paws did fine, if we had realised this detail before walking upstairs, we would have had taken turns with him waiting downstairs. A smaller dog wouldn’t have been able to cope with that surface, risking to twist their legs and get hurt. 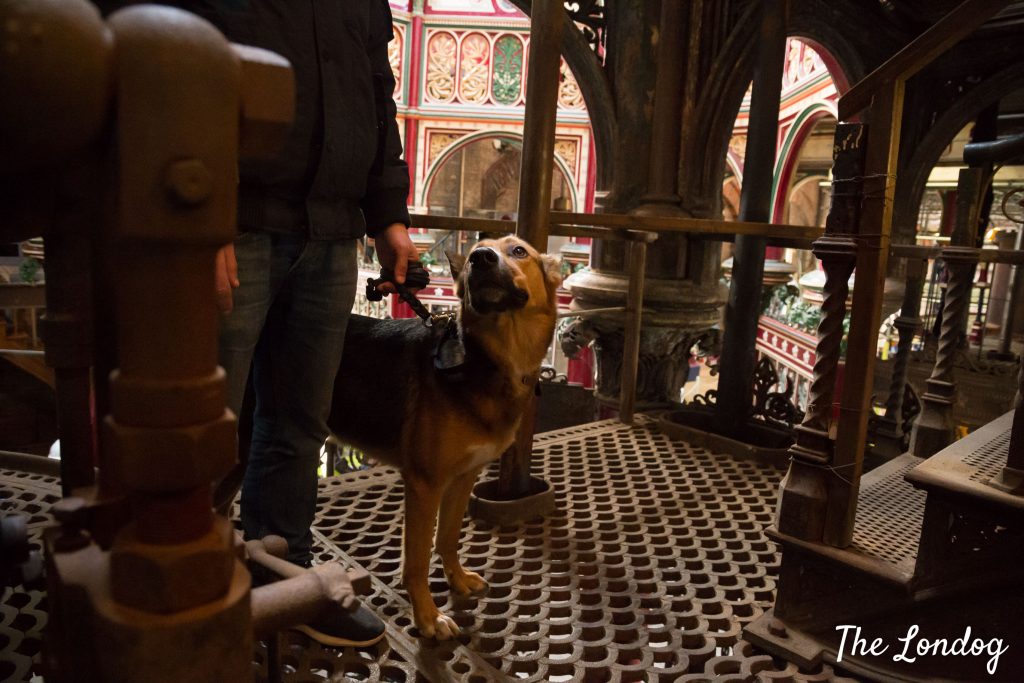 For this reason, I would advise you either come with a friend and take turns upstairs, keeping the dog grounded, or if you have a small dog, bring a dog backpack to transport him/her while visiting the upper floor (but be very careful with the iron-works walking up). I would not advise trying with other types of pet carriers as you have to climb up some steep stairs and it may be risky. 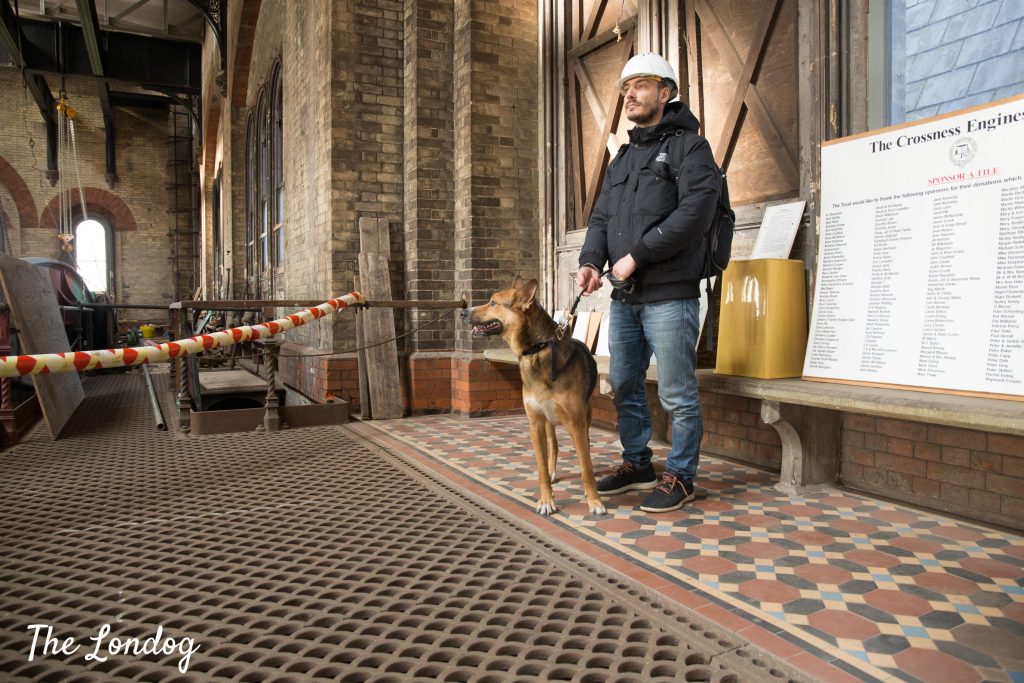 The Prince Consort was in full steam when we visited, with rod and piston circling at good pace. It would have been very interesting to do a guided tour (they are hosted on different dates) and learn more about the pumping station and the restoration. We also visited the tools building and the Valve House which are hosted in other buildings at the site. In general we very much enjoyed our visit (apart from the transfer part), and would recommend it for a unique experience.

Essential information for your dog-friendly visit 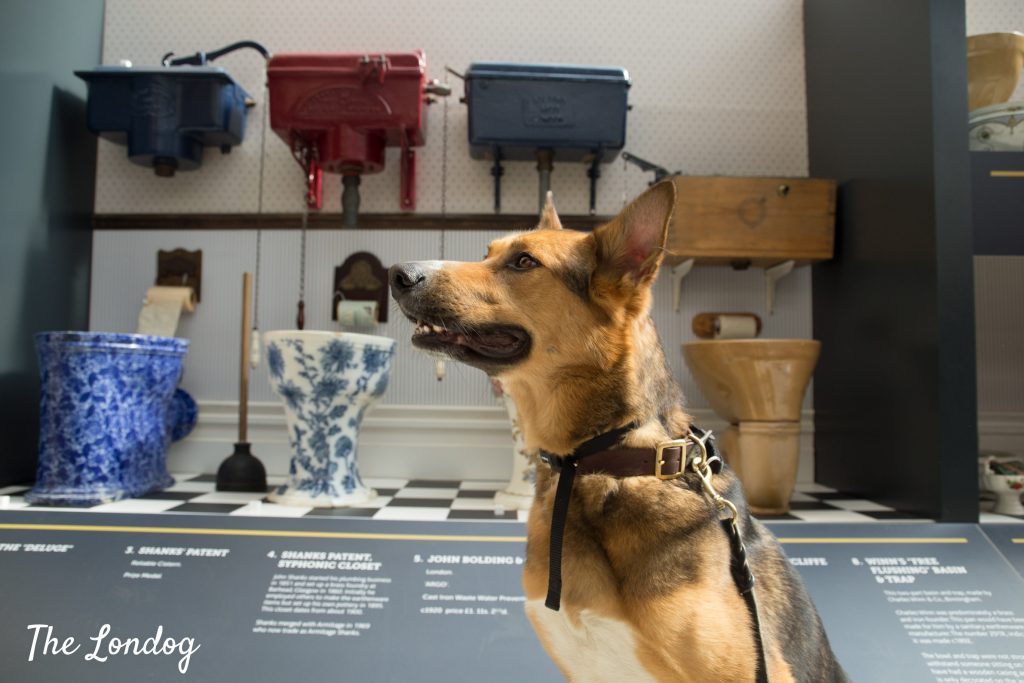 As mentioned, flat shoes are essential for visiting the Prince Consort beam engine. A warning about bringing dogs in that particular section as discussed above, better to take turns and leave them grounded while one of you walks upstairs.

Opening times: The Crossness Pumping Station is open only on selected dates. In general, they host two types of events:

Tickets: Tickets for the Family Open Day cost £8 per adults if the Prince Consort is in steam, or £6 for dates when it is not, which are paid at the entrance and are purchased directly at the ticket office. In both cases, children 5-15 pay a ticket of £2. Tours must be booked in advance and you can purchase your ticket on Eventbrite, for £12 plus the Eventbrite fee. 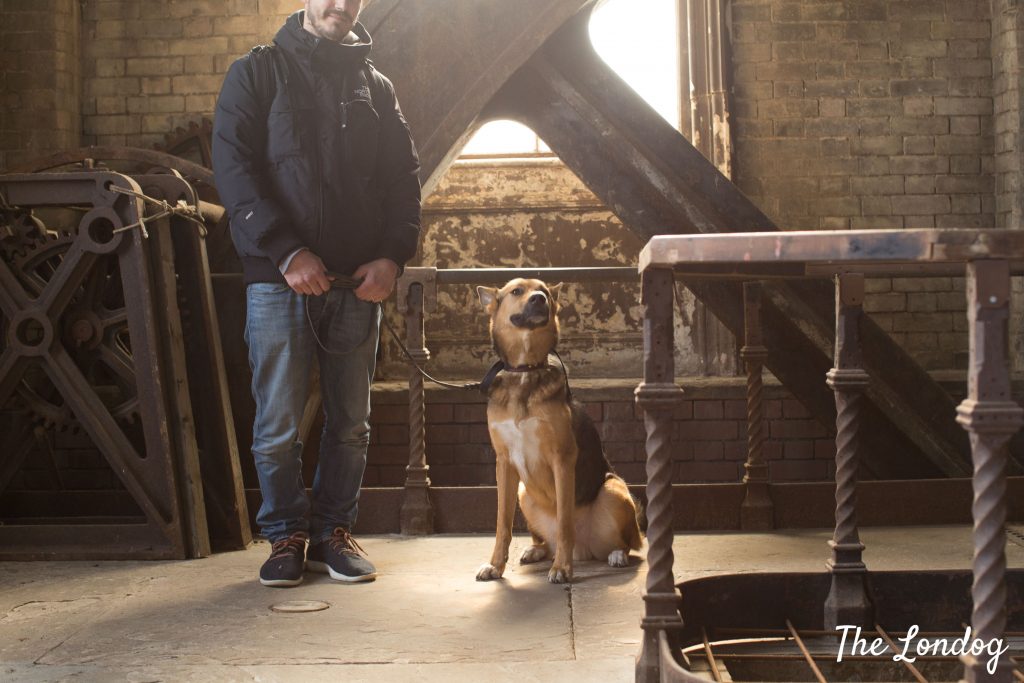 How to get there: 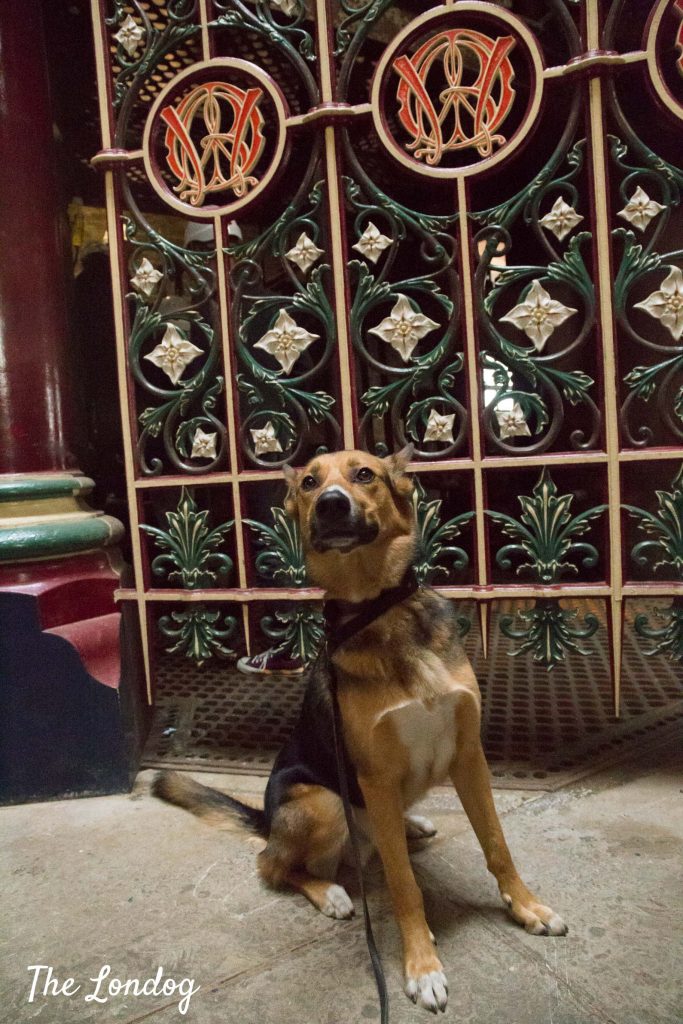